At this point, we were joking about being on the one-a-day program with rarities here on St. Paul.  Of course, we never actually expected it to keep it up.  But hey, the surprise we had in store for the following day was GOOD one.

Scott and I were heading up into Zap Ravine when we spotted an ORANGE-CROWNED WARBLER.  Although not a rarity, it was my overdue first for St. Paul Island.  It dipped down and around the corner though before I managed a picture.  Because I've been trying to get pictures of every species I can for my hokey photo list, we followed the bird into an area where we usually don't check.  What we found when we turned the corner was mighty surprising; Scott and I saw a distant bird with gleaming white underparts and with a fairly bright yellow face.  While I frantically tried to get pictures, it dipped around a corner.  We slowly continued to try to relocate the bird... and tried some more.  We got to nearly the end before we actually paused, sat down, and checked to see if maybe my previous pictures were good enough.  They weren't.  We both agreed though that it could be a WOOD WARBLER which would be only the 5th time it's been seen in North America.  We stood up to continue looking in desperation when right besides us, by only 10-20 feet, the bird flushed!  While we were sitting there trying to figure out what it was, the bird itself was within earshot of us!  This time I managed better photos, it WAS an exceedingly rare WOOD WARBLER: 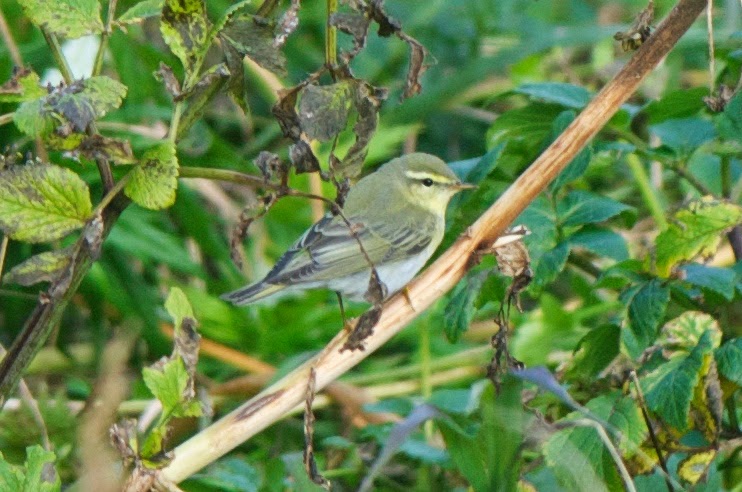 You'll notice it has a much brighter eyeline and cleaner cheek than something like Willow Warbler.  Also notice the dark hook extending down along the rear of the cheek, from just behind the eye.  That alone is a great fieldmark for Wood.  Here's another photo showing the greenish back and very long wing projection: 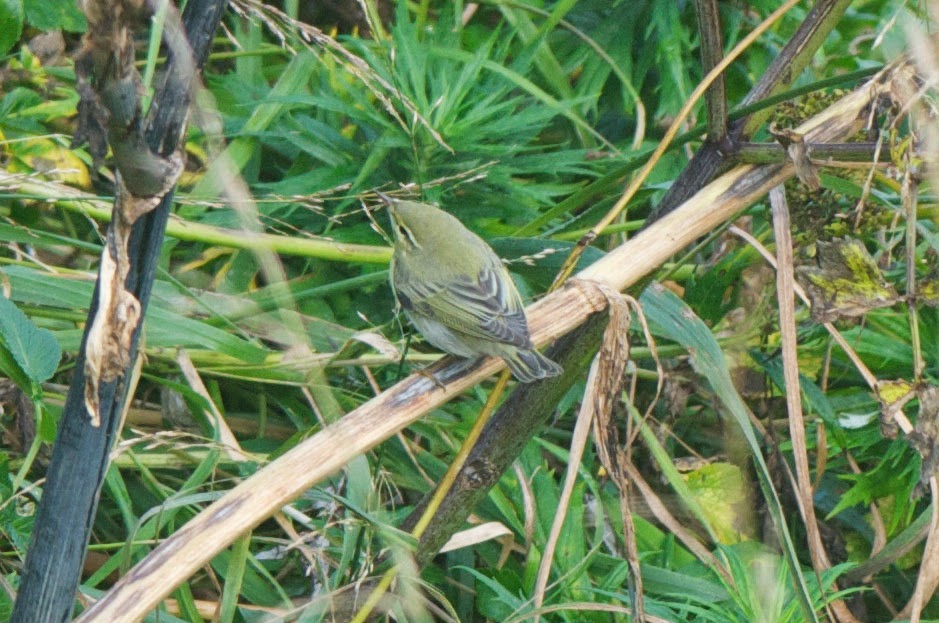 Fewer than 20 people have ever seen a Wood Warbler in North America although this was actually the 2nd record for St. Paul Island (the first was in 2004).

Fast forward to the next day, and we continued with the one-a-day talk in jest.  Later in the morning, it actually became a reality.  A couple of birders and I were walking the crab pots when I caught some movement in the top of a stack of pots.  Bins up.  Mental click.  I was looking at a SIBERIAN ACCENTOR!  We carefully stalked the bird until we were finally able to get some proof: 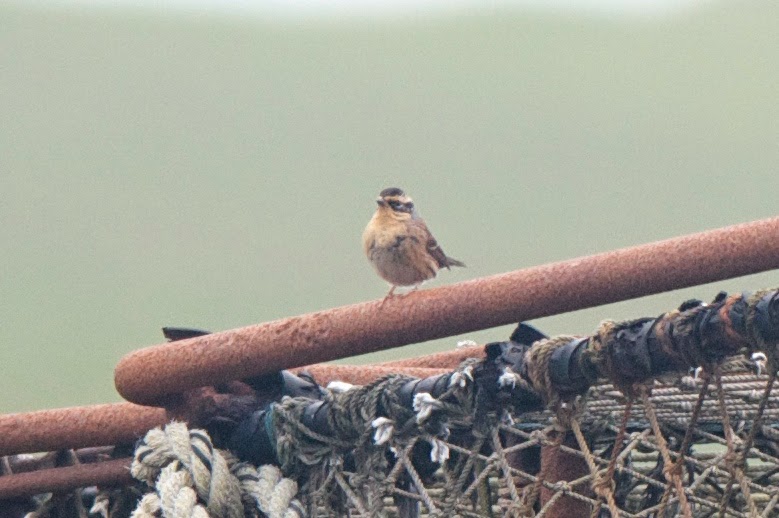 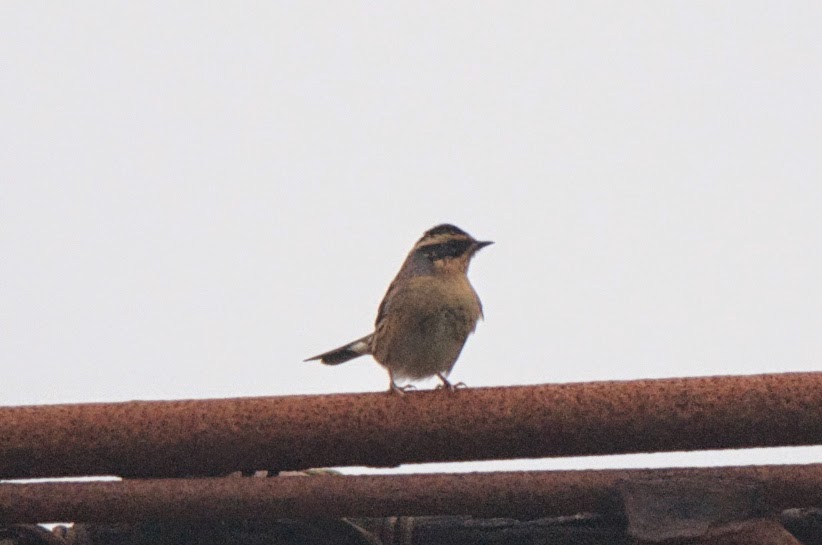 This is a cool bird for a number of reasons.  This isn't a type of sparrow, or warbler, it's... an accentor.  There are 13 species in the Prunellidae family but only one has strayed to North America; the Code 4 Siberian Accentor.  Eventually, all the birders on the island got to see the bird.  FWIW, it was hanging out pretty tightly with the continuing TAIGA FLYCATCHER that has been in the crab pots for a number of days now.

The crab pots produced another cool bird though besides those two Code 4 species.  We were chasing around a ghost of a bird for a bit; flushing it from dense cover only to see it dive back into dense cover.  By some matter of luck, it popped up to the very top of the pots once; it was yet another an OLIVE-BACKED PIPIT: 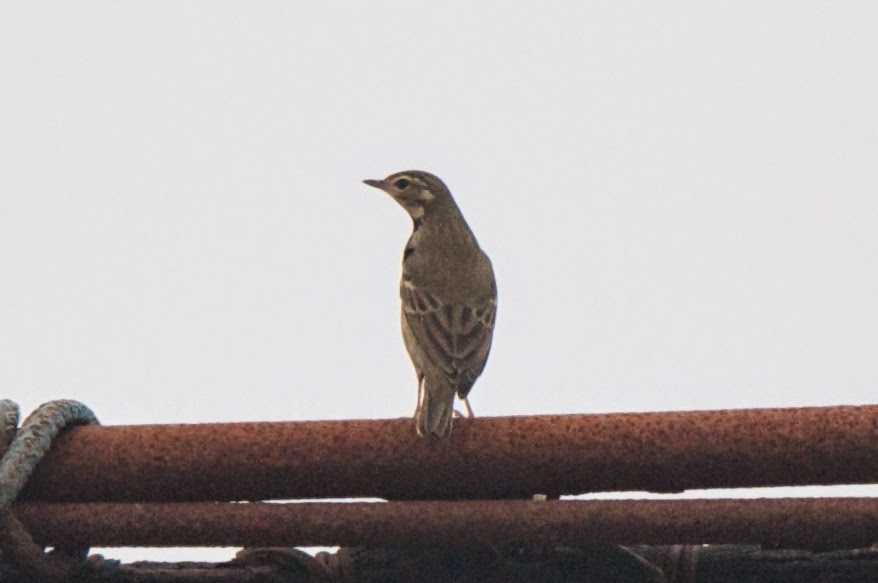 If the olive-colored back wasn't enough to ID this bird (which is tough to see when backlit like this), note the pale spot right of the cheek.  That's a great fieldmark for Olive-backed.

Yesterday produced another Code 3 pipit species as well... but this one much more expected.  A RED-THROATED PIPIT circled us, calling, at Antone Slough: 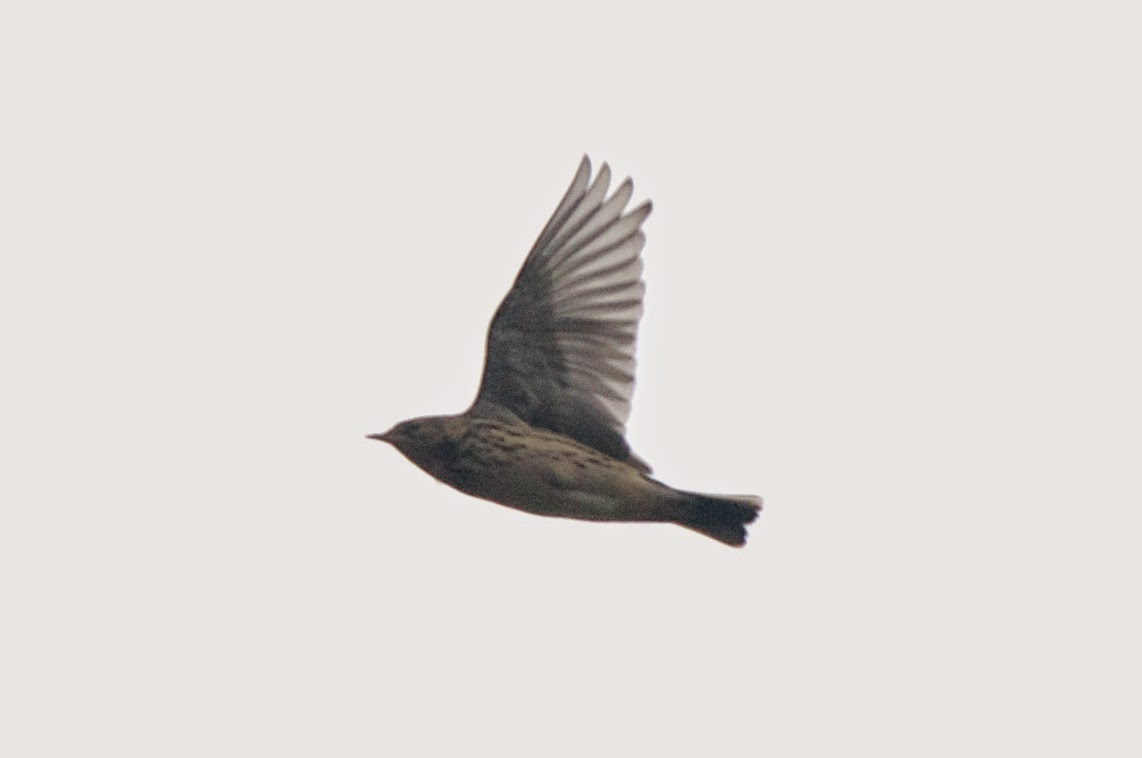 Knowing the call note of this species is IMMENSELY helpful, especially if you live on the West Coast and want to pick out a flyover RTPI mixed in with American Pipits.  It's not hard to do either... as long as you know the call.

Lastly, the SNOW BUNTINGS were using the top of one of our vehicles as a dinner buffet last night; the insects were out in force and the top of the van seemed to attract good numbers of both moths and buntings: 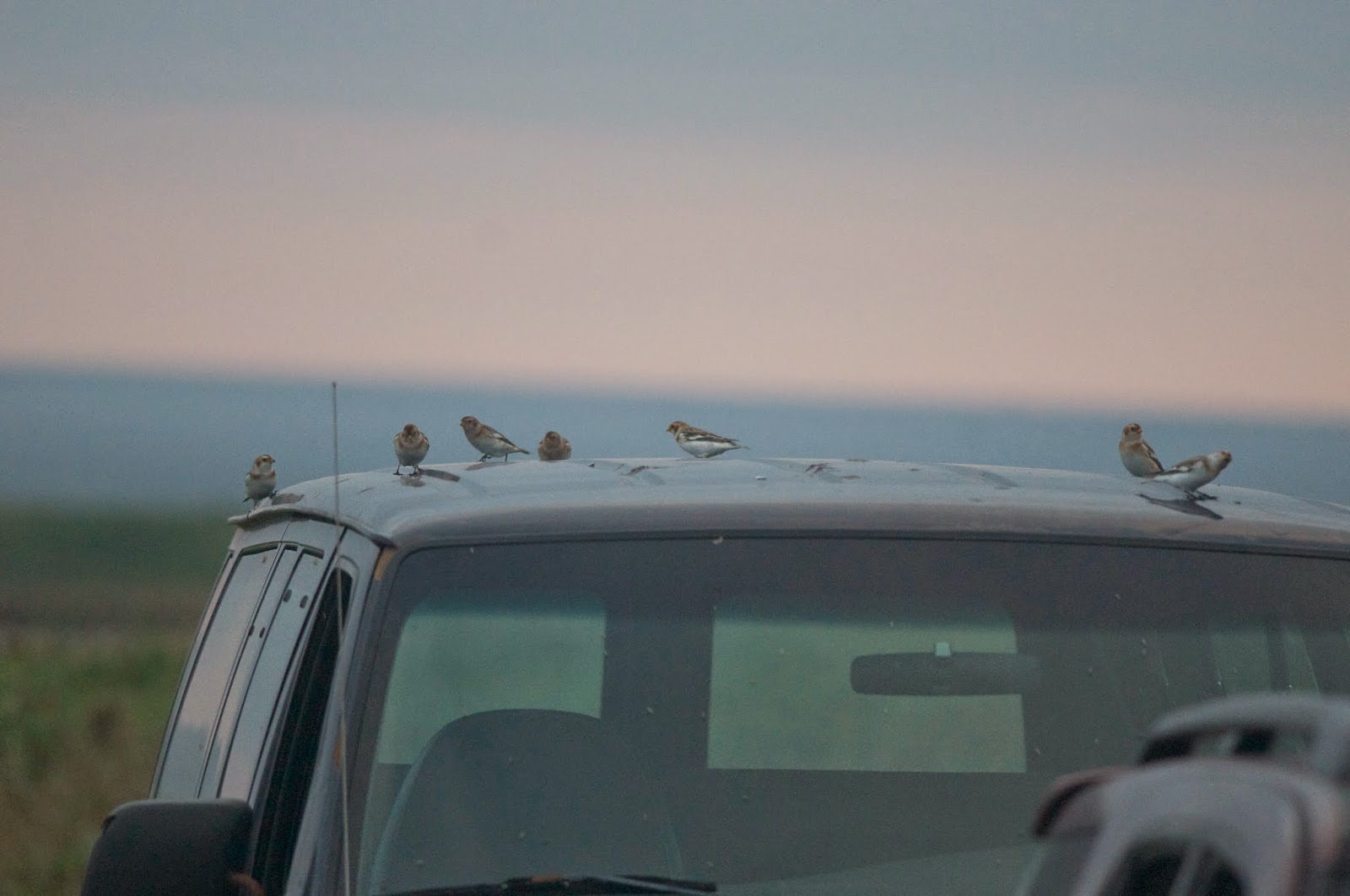 So with that, this amazing fall season continues on.  As always, if you have questions or comments, feel free to shoot me an email at: