I'm not sure how else to describe it out here other than "getting goofy".  The rarities just keep on piling in and quite frankly, I'm losing track of even my own lifers.  This has already been the second-richest year for Asian vagrants here and if the pace keeps up, we'll pass the famous 2007 season.

A couple of days ago, Scott and I were talking about potential vagrants and I actually uttered the words "Well, if you find a RED-FLANKED BLUETAIL tonight I probably won't chase it".  The only reason for that being a) it wasn't likely they'd find a bluetail that night and b) I have been lucky to see that species before in the ABA area.  Fast forward an hour and I get a call from them up at NE... they had found a Code 4 bluetail!  Ha!  And even though I stayed true to my word that night, the rarity stuck another day and we all got absolutely crushing views of it in Hutch Cut: 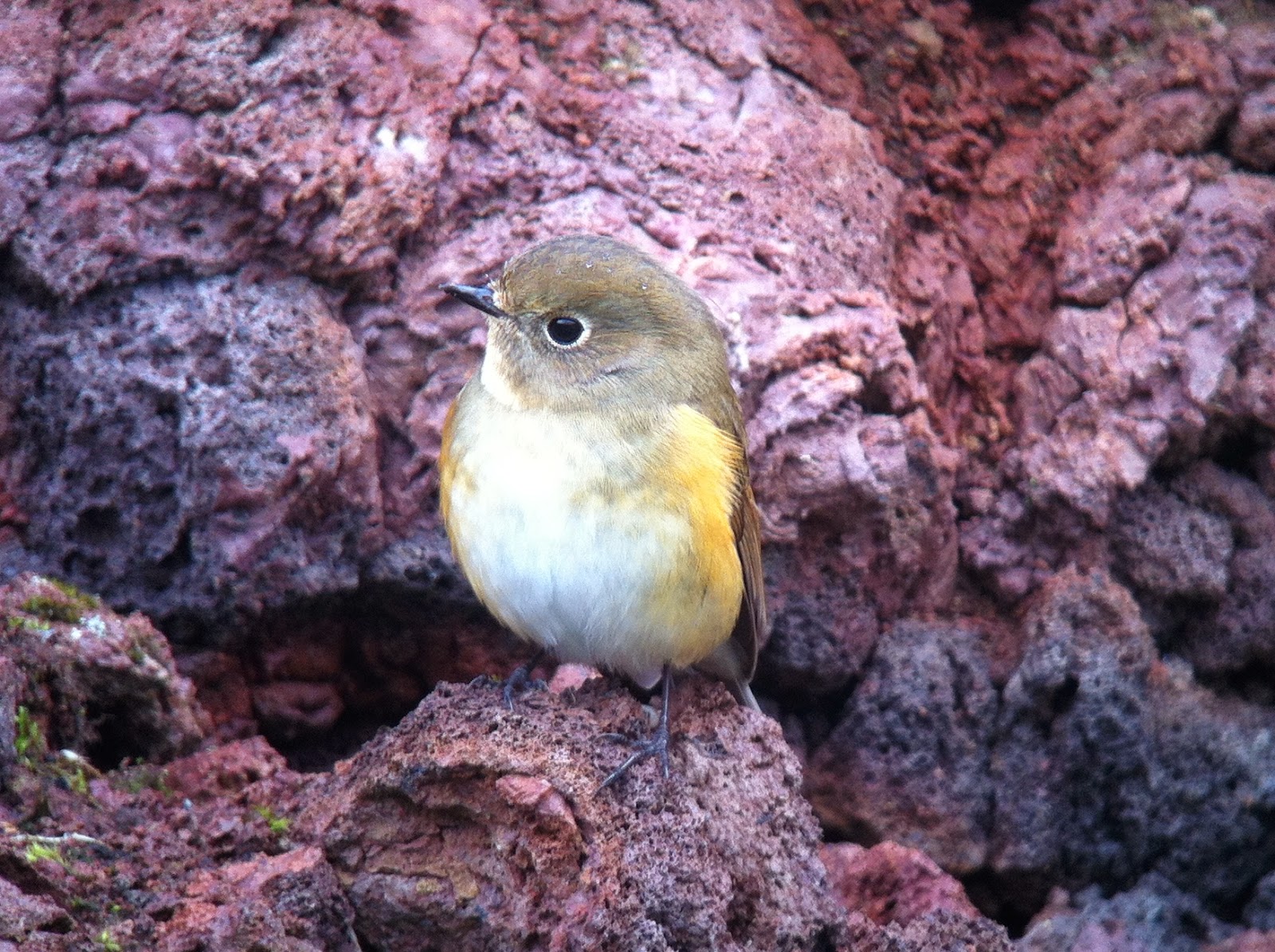 I know, it wasn't a lifer... my lifer for the day came earlier when they found a TAIGA FLYCATCHER foraging along the road to Lake Hill.  We rushed to the scene and found it actively foraging: 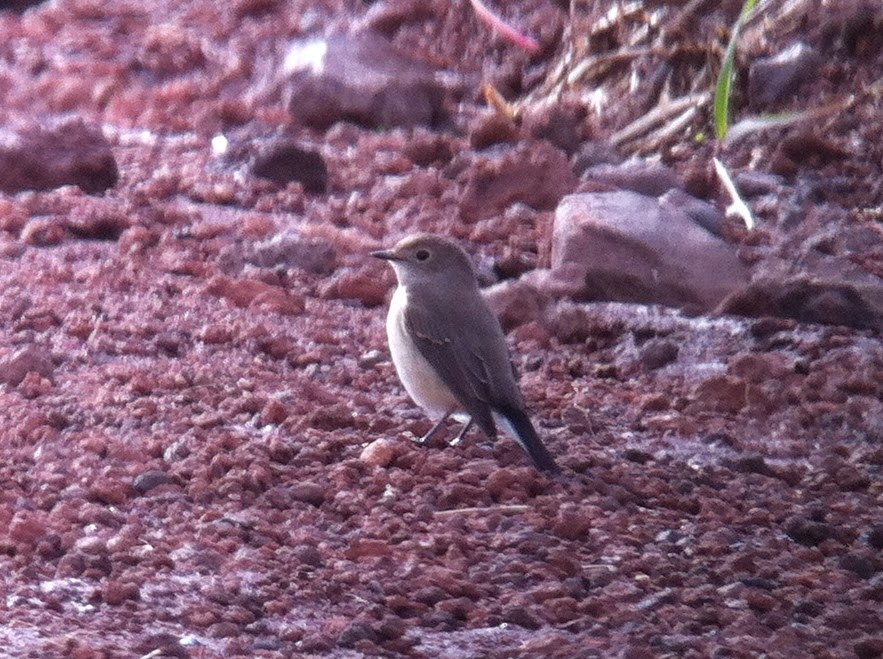 You can ask anyone around here and they'd know that this species was very high on my list of wanted birds.  This is another Code 4 rarity and was only the 6th record ever for the Pribilofs.  This species has been seen once in the Lower 48 states and, strangely enough, not too far from where I live in the Central Valley.

However, we weren't done with the Taiga tantalizing; we found one the following day in the crab pots!  Is it the same one?  I don't think anyone can say with certainty but there is a possibility of it being a different one (folks seem to think that this one looks more colder-toned).  Either way, another day, another Taiga Flycatcher: 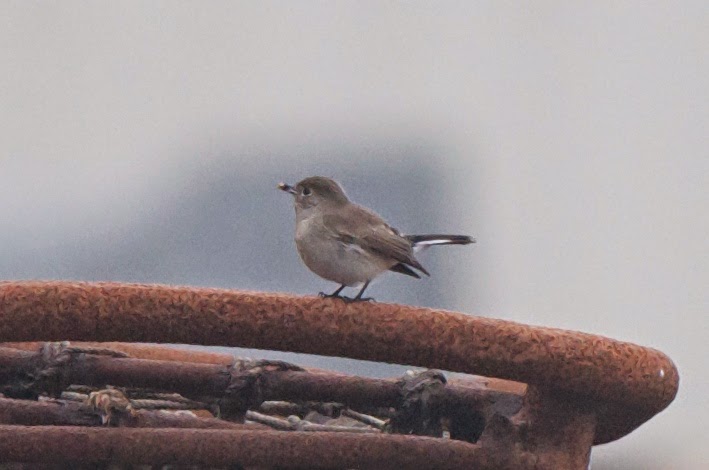 Oh, and yes, the RED-FLANKED BLUETAIL was still around yesterday, the 19th.  It had moved, however.  It was first found in Hutch Cut but yesterday presumably the same bird appeared down the road near Webster House: 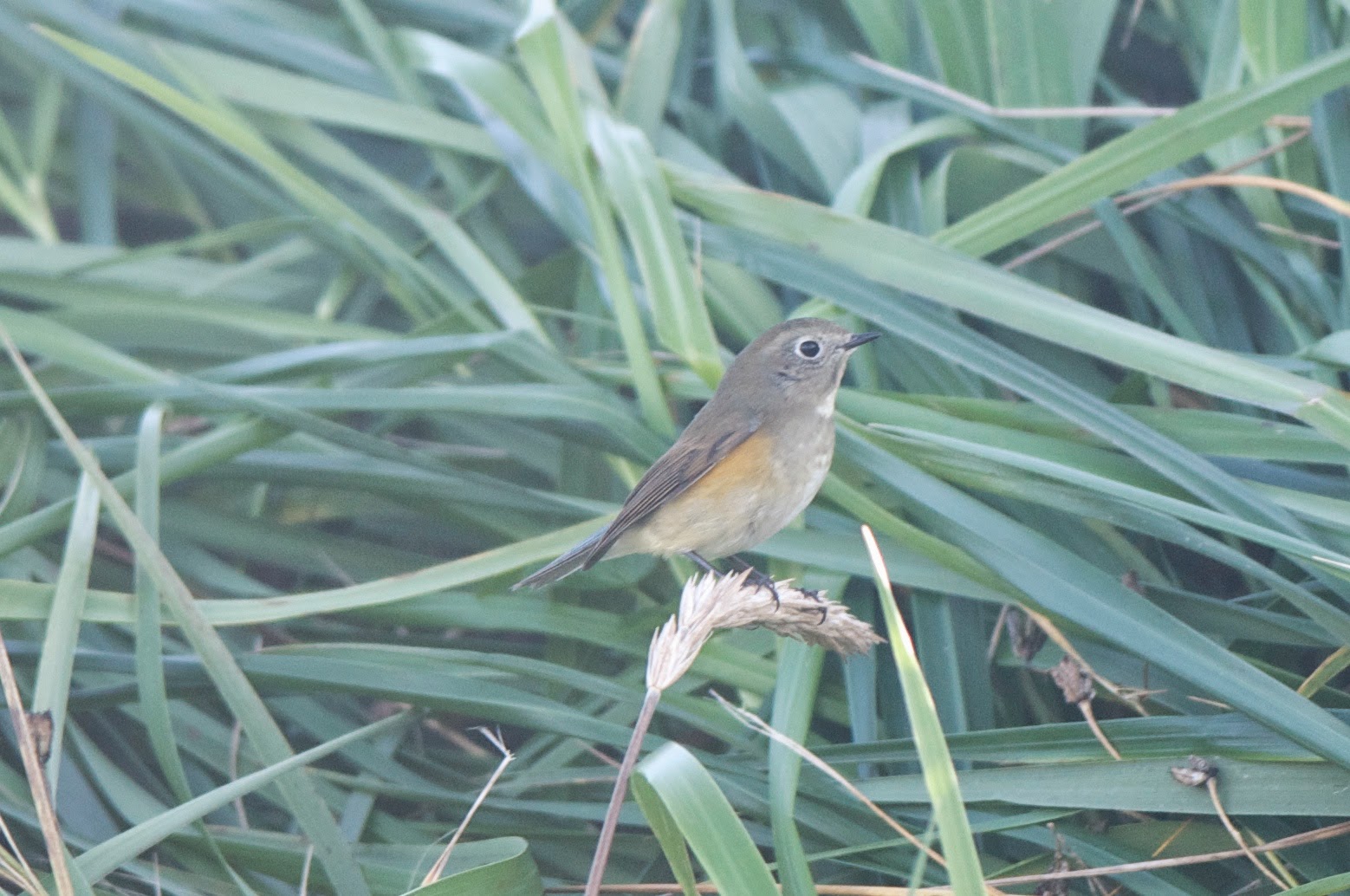 Other rarities continue as well such as the GARGANEY, JACK SNIPE, and several OLIVE-BACKED PIPITS.  Regarding the latter, I was chasing one around at Polovina Hill and only managed this humorous but conclusive documentation: 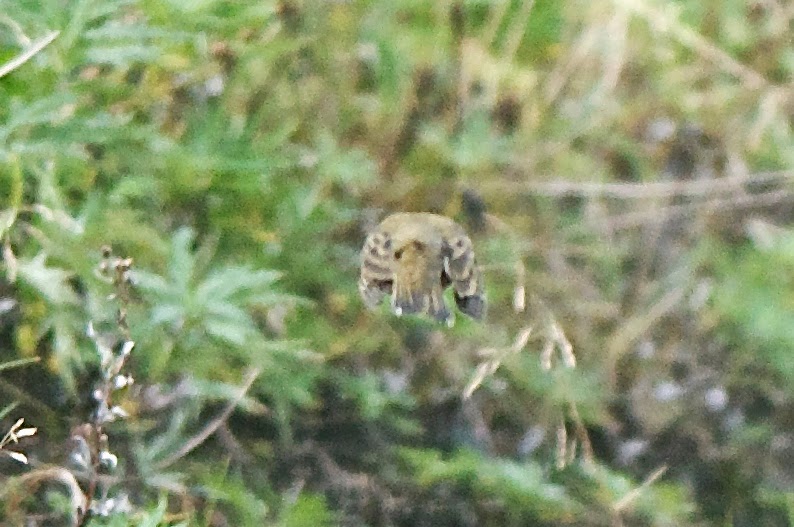 Not a particularly rare pipit here, this is the "Siberian" race of AMERICAN PIPIT.  Note the stronger face pattern, white wingbars, bold streaks on the flanks, a bit more dull streaking on the back, pale legs, etc: 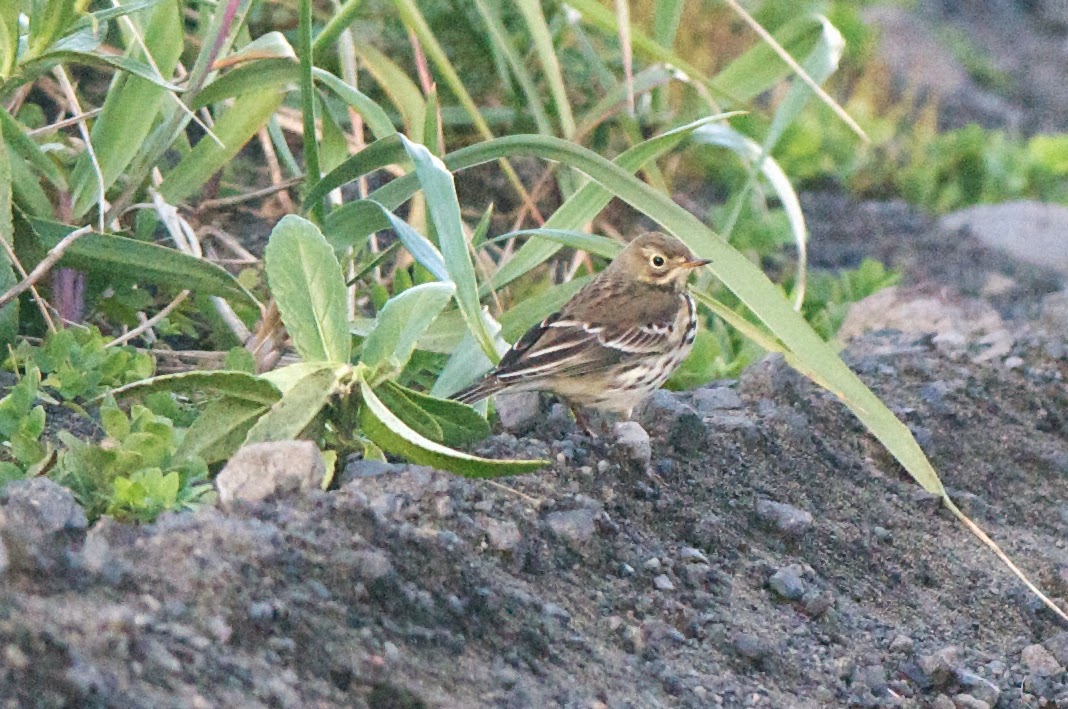 St. Paul Island is certainly the first place I've birded where you can visit your local wetland, see an EMPEROR GOOSE sitting alongside shorebirds, and not get super excited: 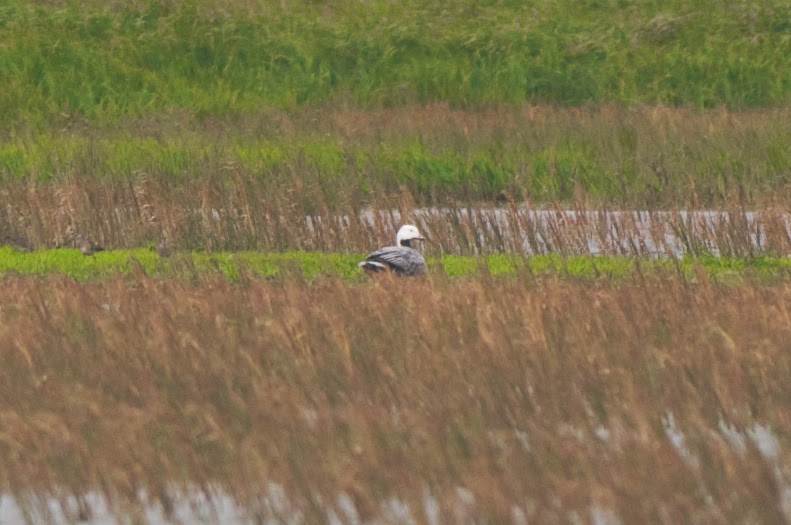 With the onset of fall, the RED-FACED CORMORANTS don't look nearly as colorful.  Interestingly, they're the only seabird that uses the cliffs here year-round. 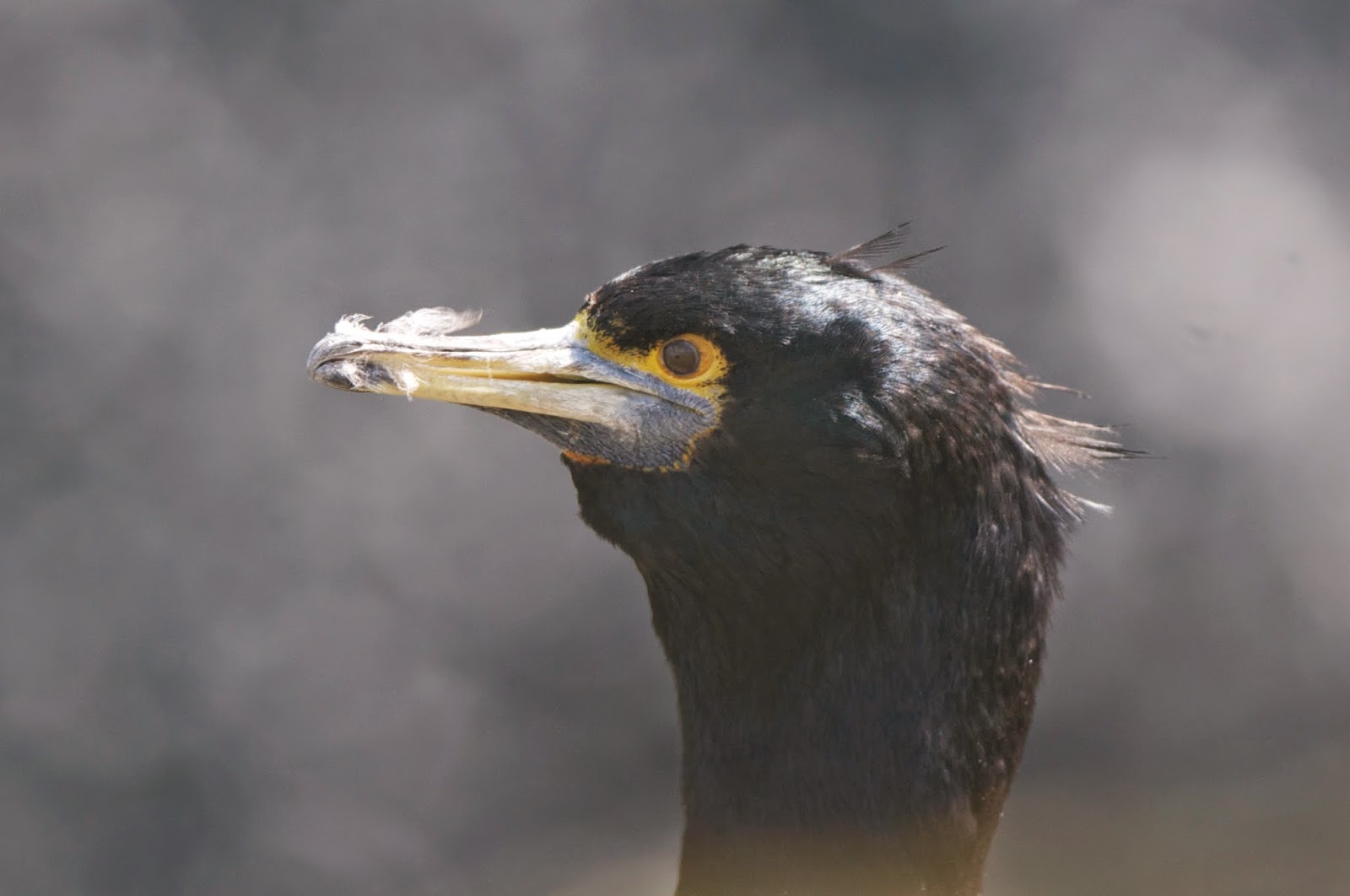 It seems that SNOW BUNTINGS are more numerous these days.  Here's one in evening light at Webster House: 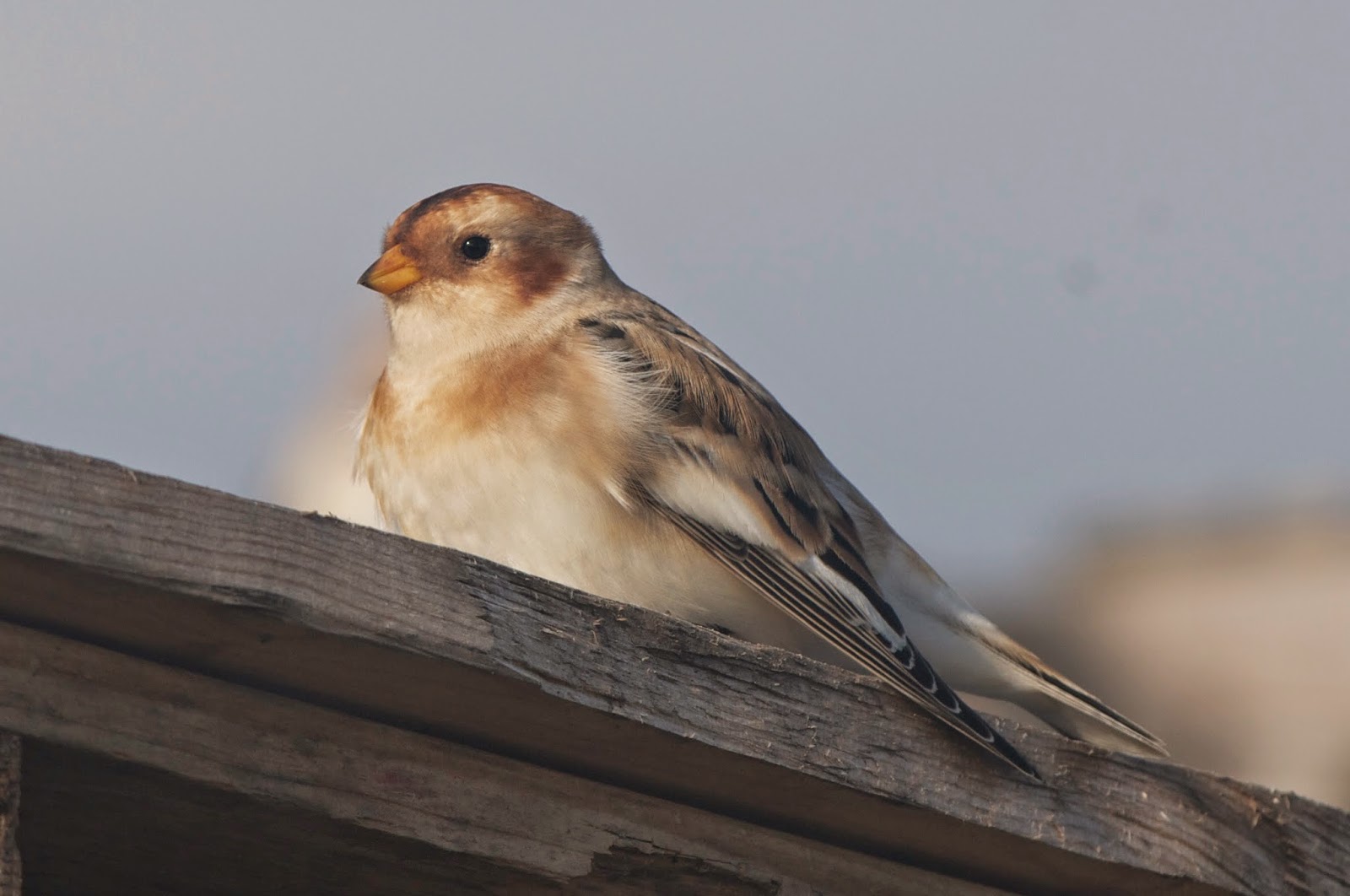 The real excitement yesterday came not from the flycatcher or the bluetail.  Instead, the folks who were walking the Webster celery patch found a real DUSKY WARBLER!  This secretive, Code 4 Old World warbler had only been seen on St. Paul twice before and was a lifer I desperately hoped for (but to be fair, I hope for all vagrants).  I ventured up late in the day to see if I relocate it and, with some luck, managed to do so.  Getting proof of this thing was a major chore though.  At first, I only managed this photo showing a brownish bird zipping away through the veg: 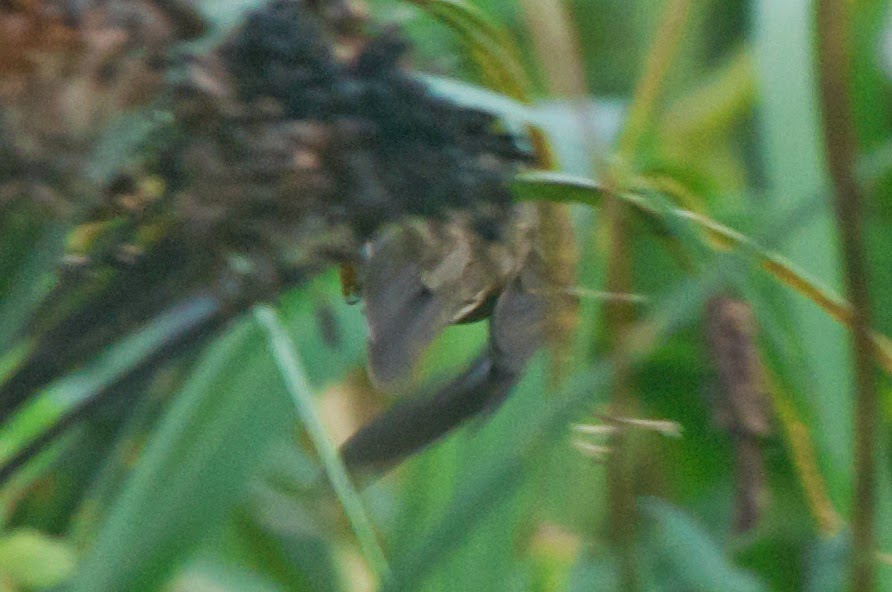 I'd have to try other methods to prove that I saw it.  A bit later on, I just started spraying when the bird took off; taking pictures of everything in rapid succession without actually knowing what I was taking pictures of.  Careful examination of my photos at home revealed that I did managed a picture of it in flight: 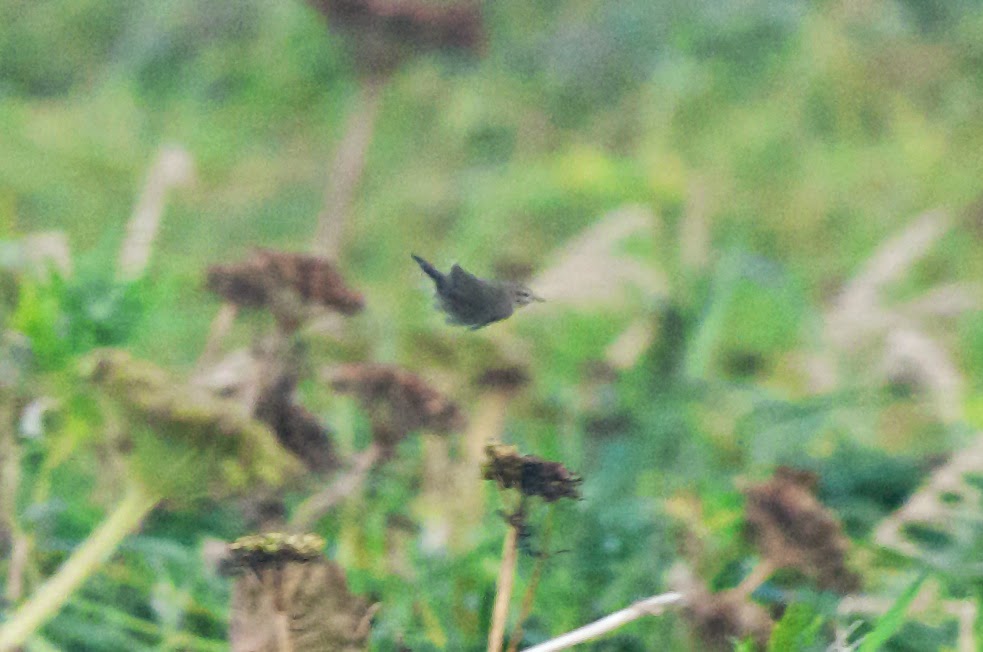 More conducive to photos was this GRAY-CHEEKED THRUSH; only my second of the year and the first one I've managed a photo of: 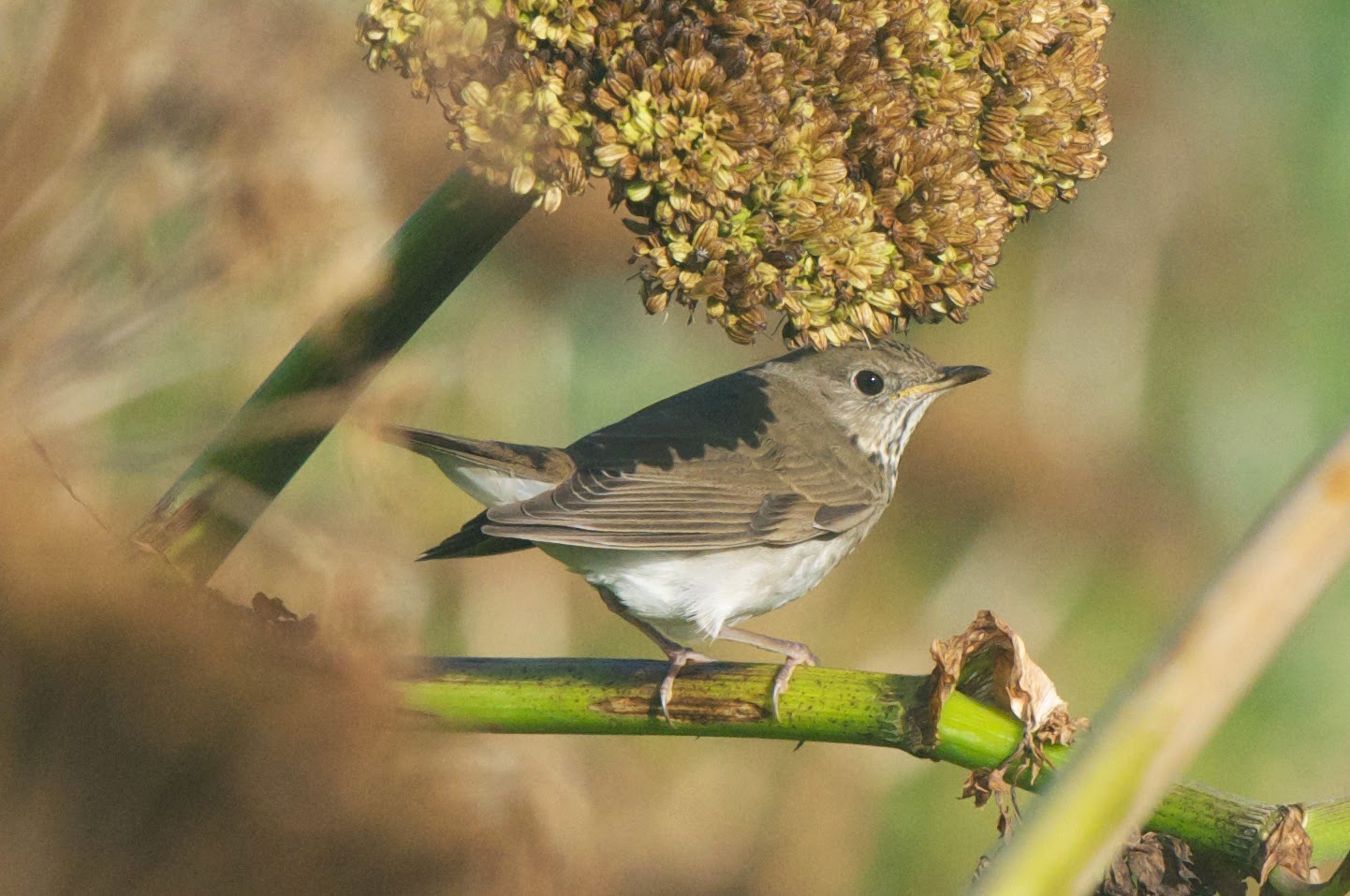 Oddly enough, this NORTHERN HARRIER over Novastoshna last night is just as rare here as Red-flanked Bluetail and Taiga Flycatcher!  And no, these photos aren't good enough to eliminate the slight possibility of a vagrant Hen Harrier: 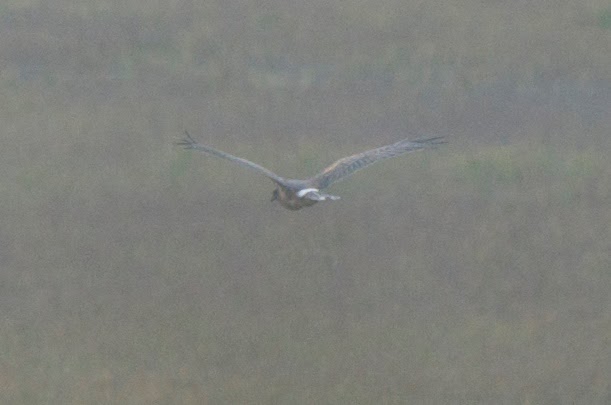 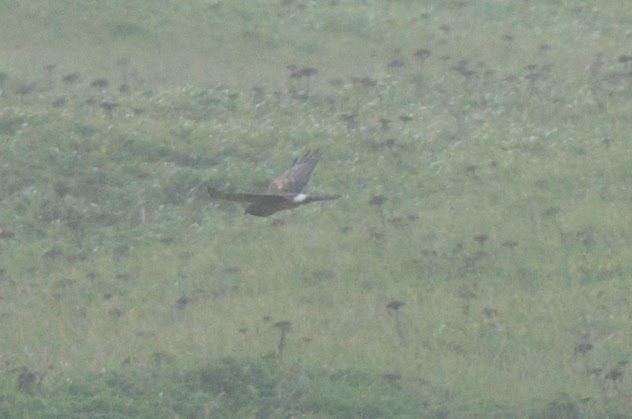 In closing, and certainly off the subject of birds, the NOAA station here releases two weather balloons each day.  We happened to be within camera distance the other day when they released one of them: 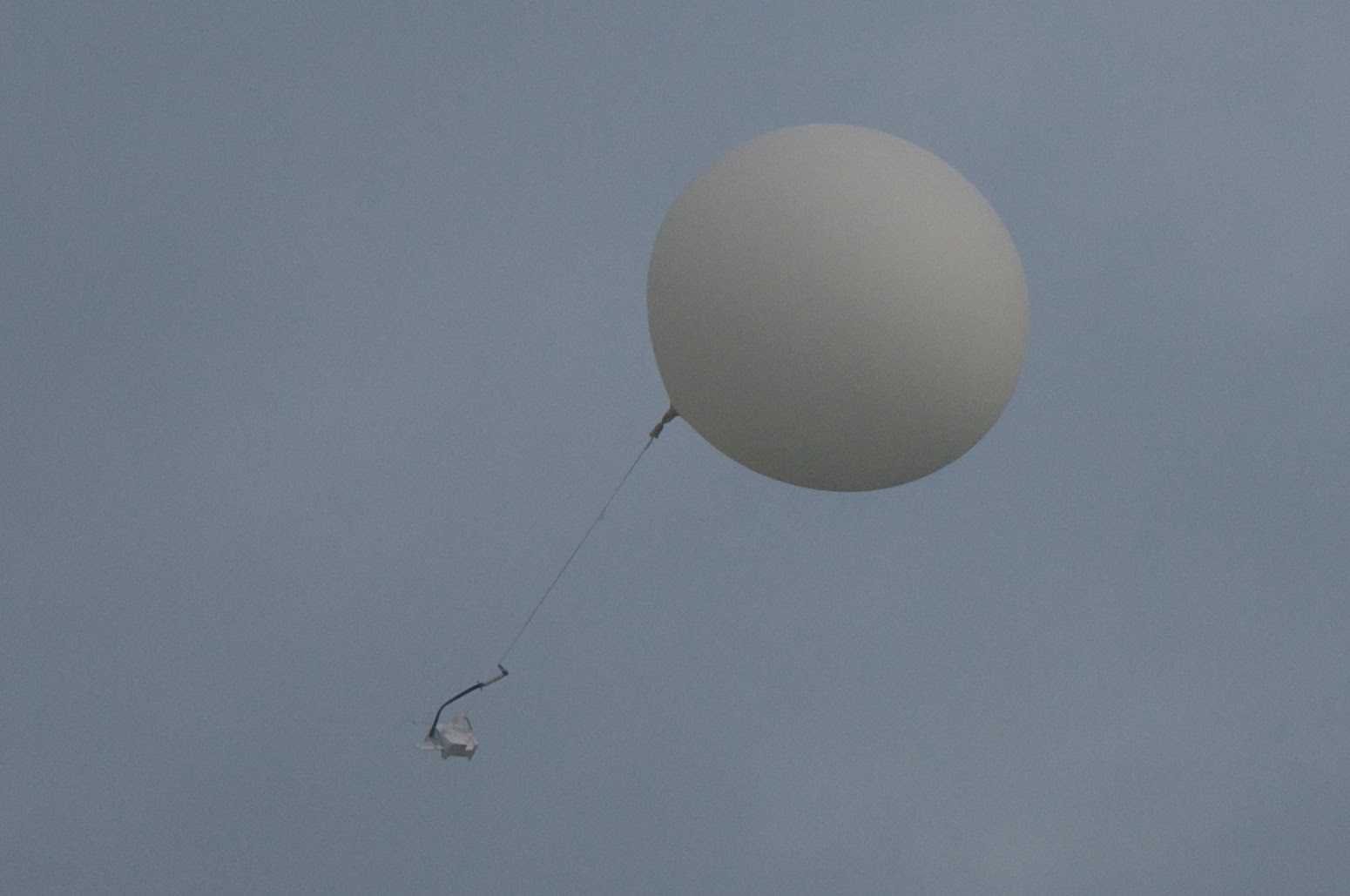 As usual, thanks for checking in and if you have any questions or comments, feel free to contact me via email at: