Ashley and I went down to Lucas and Appanoose County for some birding/butterflying this weekend.  While we didn't turn up anything "crazy", we enjoyed ourselves as we explored a new part of the state (for us).
Speaking of Ashley, she caught eyes with this guy and snapped a picture with my camera (I was probably off looking at butterflies): 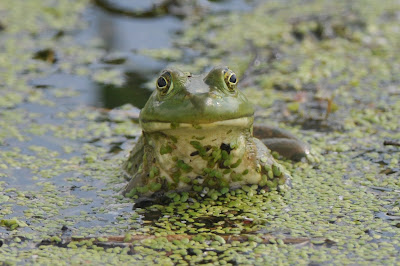 She also spotted this WILSON'S SNIPE zip in and land right behind us: 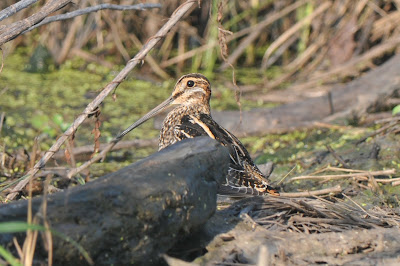 Some other things that were neat to see throughout the day included:
6 species of shorebirds
30+ Black Terns
3 Forster's Terns
30+ Great Egrets
Osprey, Bald Eagles, Great Horned Owls, etc.
1 Mississippi Kite in south Des Moines (seen from Highway 69)
We were also happy to find this BUFF-BREASTED SANDPIPER in Polk County earlier as well.  It was in a piece of "ex-sheetwater": 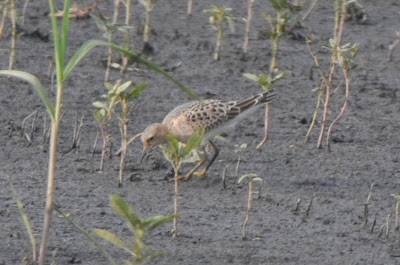 However, it was a pretty bad photo (taken from inside the car).  To make up for it, I'll post another shot; this one of a buffy I'm holding while working with shorebirds in northern Alaska: 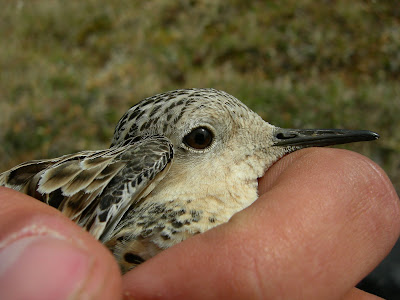 Making a quick lap around Saylorville this morning, Ash and I had this FRANKLIN'S GULL, our personal first for the fall.  A Laughing Gull had been reported the day before but we didn't have any luck with it: 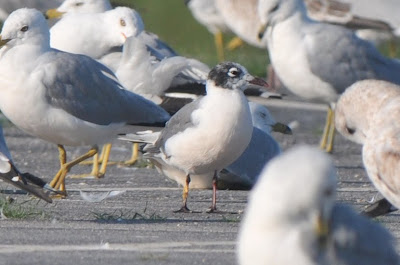 Ok, ever see a shadow of a bird zip by and kinda think "Now, I'm not exactly sure why that wasn't a... ".  Well, I snapped this picture of a stiff-winged, dark bird zipping overhead the other day.  I thought to myself "Now, I'm not exactly sure why that couldn't be a Black Swift by theory".  A stupid notion, I know, but I wanted to look more into shapes of BLSW's vs. PUMA's.  Oh, by the way, this was of course just a PURPLE MARTIN: 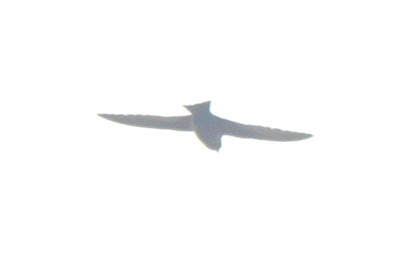 As you can see on a real BLACK SWIFT (at Cape Flattery in western Washington state), it's easy to see the wings rather angled back, not sticking straight out from the body.  Also, there is much more "tail" behind the wings than the above PUMA shows. 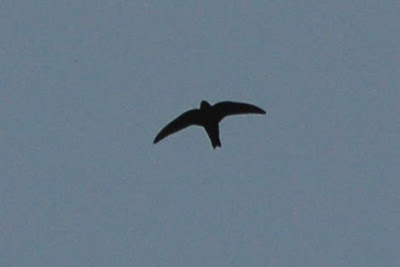 Most of us with hummingbird feeders up notice an increase in activity during this time of year.  Thus, most of this post will go to photos I've taken in the last 2 days.

First, I managed some ok light on this male RUBY-THROATED HUMMINGBIRD that has taken claim to one of our hummingbird feeders here in the yard: 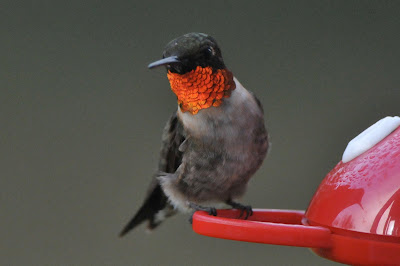 The Armstrong's who live west of Des Moines have a RUFOUS/ALLEN'S visiting their feeders.  Ashley and I spun down this morning to take a look: 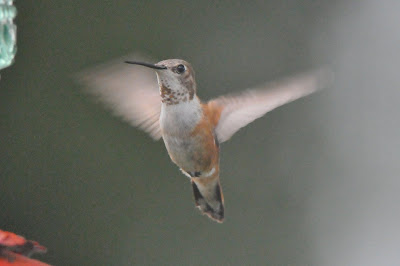 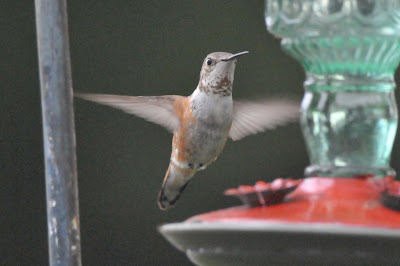 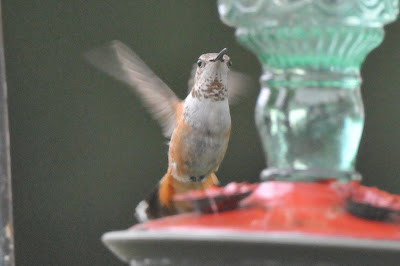 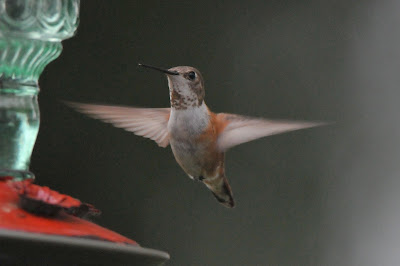 I tried to capture some shots of the inner tail feathers but that, as it always is, proved to be rather difficult: 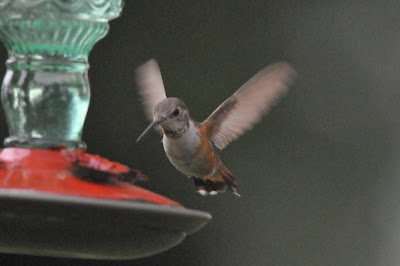 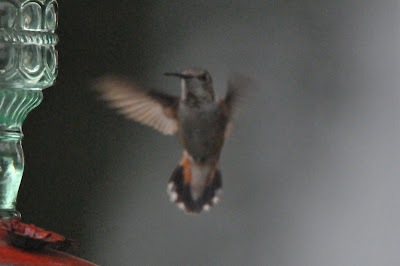 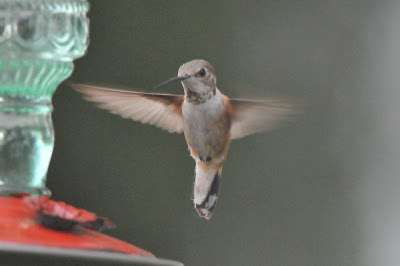 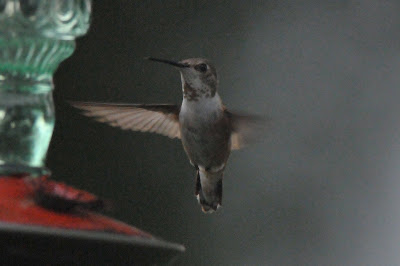 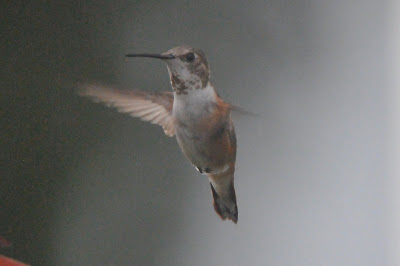 Moving on from hummingbirds though, warblers are FINALLY starting to trickle through.  Lately we've had:
American Redstart
Chestnut-sided Warbler
Tennessee Warbler
Canada Warbler
Wilson's Warbler
Blackburnian Warbler
Also:
Red-eyed, Warbling, and Yellow-throated Vireos
Blue-gray Gnatcatcher
Baltimore Oriole
Least Flycatcher
Rose-breasted Grosbeak
While down at Saylorville, we stumbled on 15 CASPIAN TERNS the other day.  I don't think I had seen quite that many at one time here in Iowa.  No Royal's though.  :-(
Speaking of terns though, we had a treat while at Hendrickson Marsh in eastern Story county.  We were scanning through a handful of BLACK TERNS when we saw a juvenile LEAST TERN mixed in.  This species is usually pretty tough to find away from their breeding grounds (usually only far western IA).  Sadly, a visit a couple days later yielded no LETE.
Posted by Cory J. Gregory at 8/20/2010 03:31:00 PM

Ashley and I had this LAUGHING GULL at Jester Park earlier today.  It was mixed in with about 10 RBGU's at the waters edge. 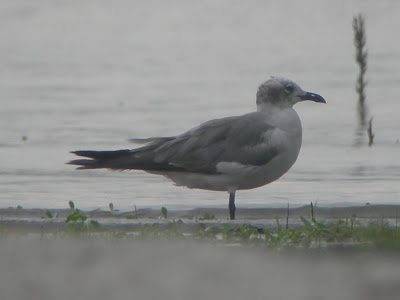 Tim and I took a break-neck speed trip to western South Dakota over the weekend for the ORANGE-BILLED NIGHTINGALE-THRUSH that has been in Spearfish Canyon since July 9.
Just like clockwork, the thrush started singing at 5:16 AM from across the road (the side with the house) and it was the ONLY bird singing for at least 15 minutes. Even though it was still too dark to see it, we could tell from the constant singing that it flew across the road and started moving up-stream. After about 1/2 hour of singing its full song, it began to sing less and less frequently. Over the next several hours, it would only sing small fragments of the full song from time to time.
Seeing the OBNT was another matter though. We all got quick glimpses here and there for a couple hours but it never cooperated for all of us. Finally after a couple hours of stalking, I was in the right place at the right time (9:24 am) for good looks and even an ID'able picture: 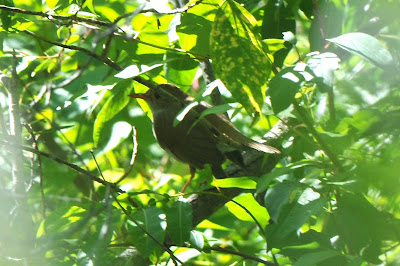 Spearfish Canyon was filled with a lot of other interesting things including Canyon Wrens, Violet-green Swallows, White-throated Swifts, Cordilleran Flycatchers, and this cooperative AMERICAN DIPPER: 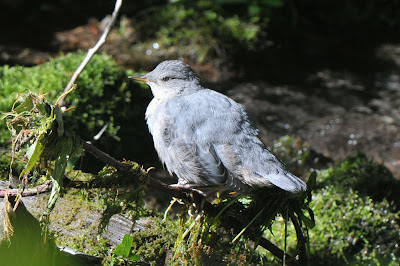 Also, this RED-NAPED SAPSUCKER peeking from behind a tree was a new ABA photo bird for me: 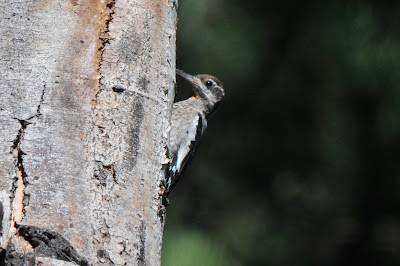 We figured that since we drove 10+ hours just to get here, we'd be stupid not to bird a couple other canyons in the Black Hills. Some interesting things included LESSER GOLFINCH, GRAY JAYS, WESTERN TANAGER, etc. In one of these canyons, we had some RED CROSSBILLS fly in. We were both shocked at the size of the bill on this thing! 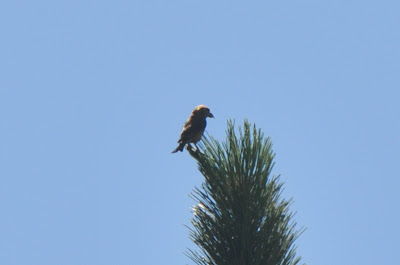 Another highlight was hearing a BAIRD'S SPARROW singing this late in the season southeast of Rapid City. Although we never got decent looks or pictures of the sparrow, I decided to model this COMMON NIGHTHAWK with the evening light instead: 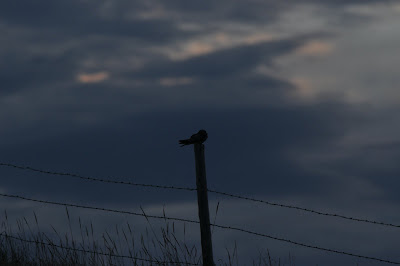 I was happy to do some butterflying in a new location. A highlight for me was this WEIDEMEYER'S ADMIRAL in one of the canyons: 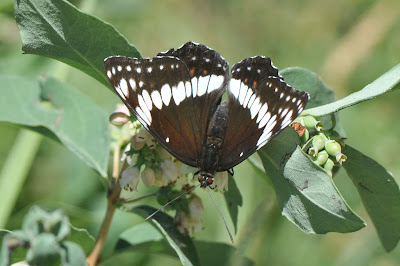 Also, this SMALL WOOD-NYMPH was another new butterfly for me. Unfortunately, it only landed once (and was quite a ways away when it did): 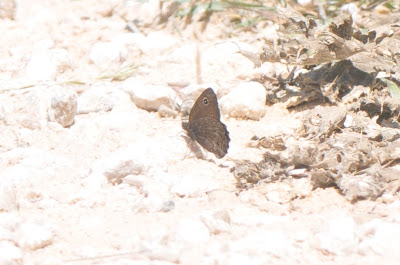 Definitely not shy was the swarm of COMMON CHECKERED-SKIPPERS along this roadside: 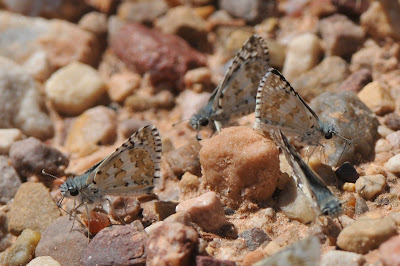 I'll admit, I haven't had time to try to ID this fritillary yet but I'll get to it eventually: 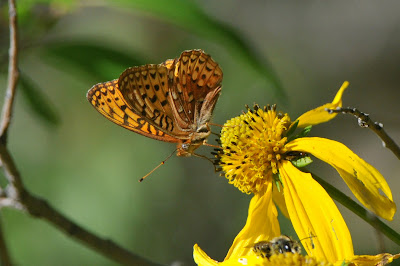 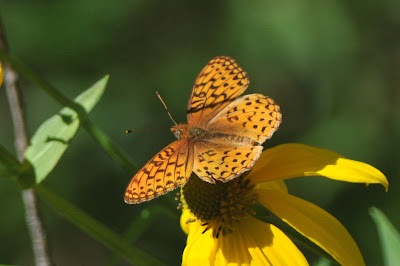