With the new thin layer of snow, the AMERICAN TREE SPARROWS are back at my feeders.  The HARRIS'S SPARROW is still reliable as well.  However, the best bird lately was this RUSTY BLACKBIRD, my 106th yard bird: 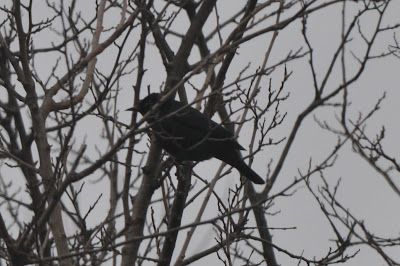 Not sure it's a Rusty?  Check out the bill (thanks Tim); a Brewer's would have a stouter bill in most cases.  In addition to that, a Brewer's Blackbird would be very rare at this time of year in Iowa.
This time of year always brings flocks of waxwings and robins to some fruiting trees in my neighborhood.  Here is a CEDAR WAXWING: 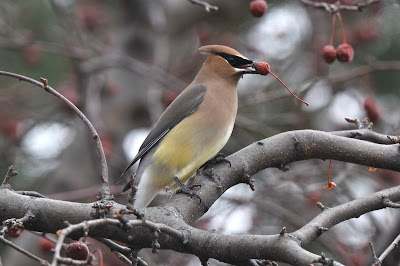 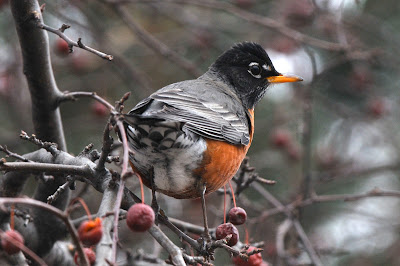 This was one of the strangest things I had seen in a long time...

Around 6:15 PM when I was heading home from campus, I turned onto Todd Avenue here in west Ames (like I do every day) to find a SHORT-EARED OWL hunting in a small open area.  This is surely the most suburban setting I've ever seen one and would have never, ever expected to find one using such a small piece of "habitat".

Here is a map of the location:


Although these weren't taken in Iowa (in Nebraska instead), here are a few pictures of SHORT-EARED OWLS: 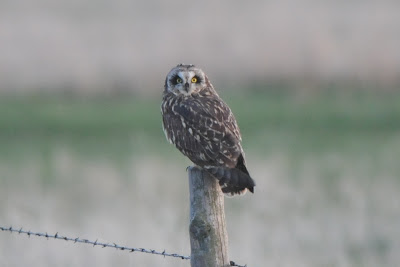 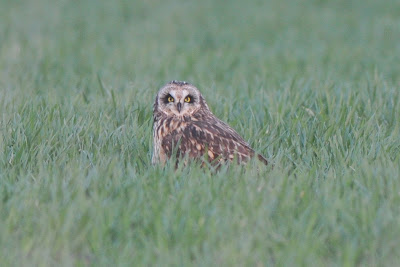 The HARRIS'S SPARROW that has been frequenting my feeders since January is still present but no sign of the 7 AMERICAN TREE SPARROWS since the thaw. 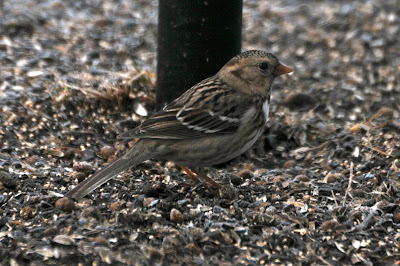 Earlier this winter (back when there was snow on the ground!) we managed to see some neat owls here in the midwest.
First, here is the always-shockingly-tiny NORTHERN SAW-WHET OWL (Aegolius acadicus): 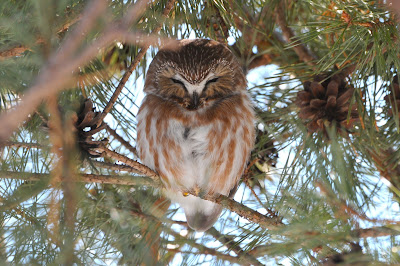 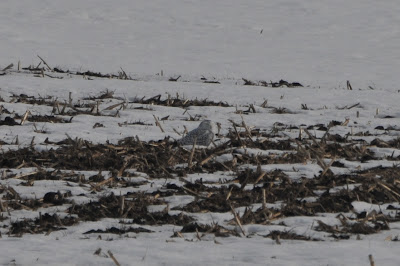 Ok, this isn't an owl, but rather a HARRIS'S SPARROW (Zonotrichia querula) that has taken up a winter-residence at my feeders here in Ames (you can see an AMERICAN TREE SPARROW in the foreground): 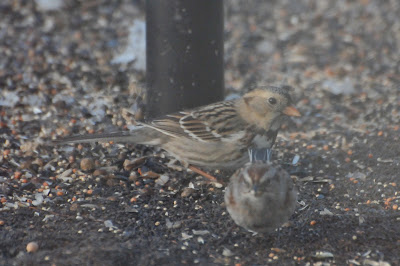 PLEASE note that the correct name is Harris's Sparrow.... not Harris Sparrow.  Same issue as with Ross's Goose (it's NOT a Ross Goose).  Anyway, this bird was especially rewarding for me because a) it was a new yard bird (#104) and b) it completed my North American Zonotrichia sweep this year for the first time in my life (see my previous blog post about the Golden-crowned Sparrow we snagged earlier this year). 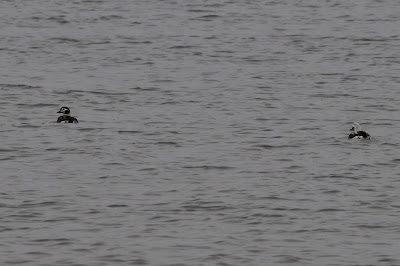 As most of you know, the Long-tailed Duck was formally known as Oldsquaw but the name was changed in 2000 (or thereabouts).  Wikipedia sums it up like this:
"In North American English it was formally called Oldsquaw, though this name has fallen out of favor under influence of negative connotations of the word "squaw" in English usage.  Some biologists have also feared that this name would be offensive to some Native American tribes involved in the conservation effort.  The American Ornithologists' Union (2000) stated that "political correctness" was not sufficient to change the name, but "to conform with English usage in other parts of the world", it officially adopted the name Long-tailed Duck."
Personally, I didn't take offense to the former name even though I am a registered Native American.  Granted, I'm not an old squaw.
Either way, here are some other pictures of Long-tailed Ducks I've taken over the years.  The first comes from Whitefish Point Bird Observatory in Michigan where I worked during the fall of 2007.  That fall I tallied 22,968 Long-tailed Ducks migrating southeast past the peninsula.  This is a winter-plumaged male: 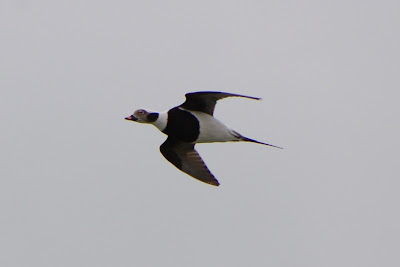 This is another winter-plumaged Long-tailed Duck but this time here in Iowa (where the species is much less common): 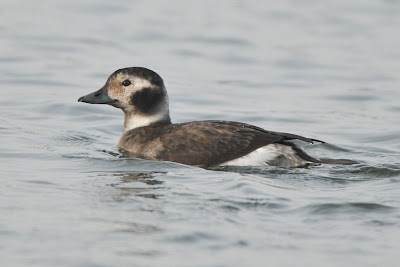 Lastly, here is breeding-plumaged male that had started to molt into non-breeding plumage (note the black being replaced by white on the back of the head).  I took this picture when I worked in Barrow, Alaska where the species is a common breeder: 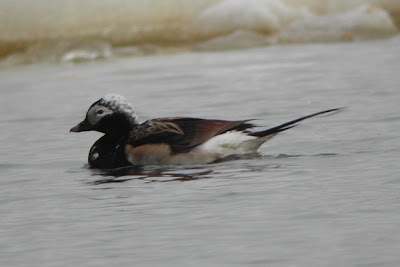 In continuing my recent theme of ABA codes and needed birds, this post is devoted to the Code 3 birds as described by the American Birding Association (ABA).

Summing things up, I still am looking for exactly two-thirds of the Code 3 birds in the ABA area.  Here is the entire list of those (five nemesis species in bold):

Earlier this year, Ashley and I drove south into Missouri to chase a GOLDEN-CROWNED SPARROW that was frequenting a yard.  We arrived and saw this SPOTTED TOWHEE right away: 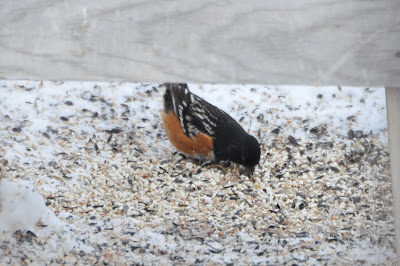 And then this bird popped up, surely the Golden-crowned, right? 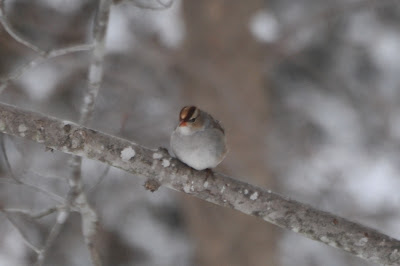 Was the Golden-crowned on the ground with these guys? 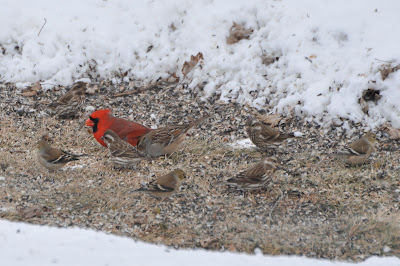 Again, no, instead there were AMERICAN GOLDFINCHES, a NORTHERN CARDINAL, female PURPLE FINCHES, and a WHITE-CROWNED SPARROW..

Finally, this bird popped up along the back of the yard.  THIS was the GOLDEN-CROWNED SPARROW: 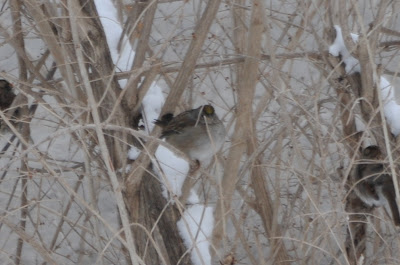 It eventually started to work towards the feeders and closer to us: 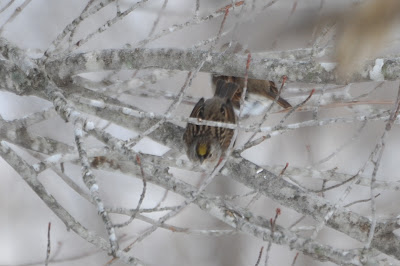 Finally, it came in and fed on the ground.  Here it is with a male NORTHERN CARDINAL, WHITE-THROATED SPARROW, and female PURPLE FINCH: 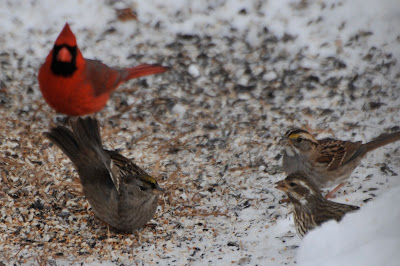 The PURPLE FINCHES here were incredible, easily 50-100 at one spot.  Here is a picture of part of the flock as well as a female that posed nicely: 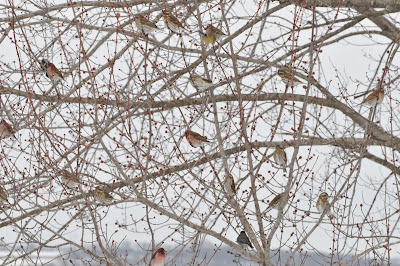 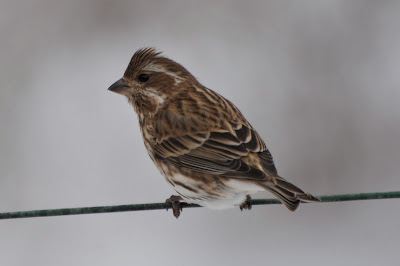 There were many AMERICAN GOLDFINCHES, this one braver than the others: 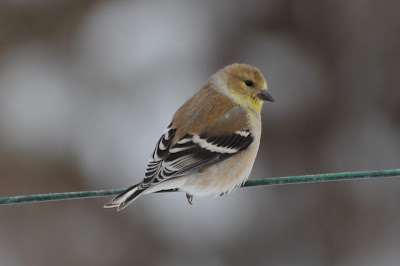 Lastly, here is a FOX SPARROW that also made an appearance: 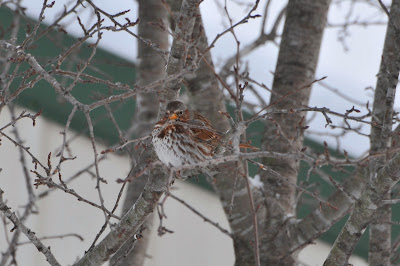 This was only the second time in my life that I had seen a GOLDEN-CROWNED SPARROW; the first being on Middleton Island, Alaska, where I worked with seabirds for a summer back in 2003.
Posted by Cory J. Gregory at 2/10/2011 10:34:00 AM

I'm only copying a friend's idea for a blog post... but considering I haven't posted on my blog in several months, maybe it's forgivable?


As many birders know, the American Birding Association (ABA) puts out a checklist every once-in-a-while that also has a 1-6 scale ranking the difficulty of finding any particular species (you can see the ABA checklist at: http://www.aba.org/checklist/abachecklist.pdf).  The lower the number, the easier the bird should be to find.  With that in mind, here are some species I'm still searching for....


As you can see, I'm hurting most with my lack of seabirds/alcids.  Considering how violently ill I become on any boat, I doubt I'll see them anytime soon.


This list reminds me of my "nemesis" list... birds I've tried for and missed (sometimes many times!).  If I had to pick the top 5 from the above list, they would be: