I've been hanging out mostly in Allegany County, New York.  If you're not familiar with it, you're not alone; Allegany must be one of the least birded counties in the state.  It sits in the western part of the state where Pennsylvania borders its southern edge, it's a couple of hours from Lake Erie and slightly less to Lake Ontario.  Buffalo is to the NW and Rochester to the N.  Here's the outline of where it is: 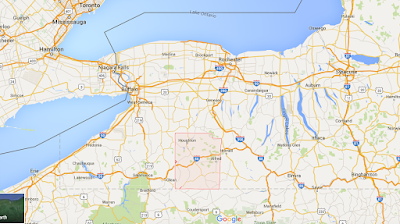 It's a somewhat tough county to bird, in my experience, mostly because of a rather homogeneous landscape (or you could just say it *kinda* lacks in habitat diversity).  The hilly terrain dominates this part of the state and the hillsides are wooded, the hilltops can sometimes be open farmland/fields, and the valleys have streams.  However, the more time I spend getting to know these spots, the more potential I've been seeing.


A perk to birding this county is that just about anything you eBird will fill a hole.  I've always thought that birding is much more rewarding when you get to explore and find your own birds (and hotspots) instead of following people to mega-spots that are saturated with birders (although there are benefits to that too).  And besides, just getting out and birding a lot almost always delivers some surprises, it doesn't matter where you are!

One such surprise came when Ashley and I were birding some hilltops around Wellsville, the town in which I was born.  We spotted a very high hawk circling and photos revealed it was an adult NORTHERN GOSHAWK.  Very cool!  My photos, on the other hand, are crap: 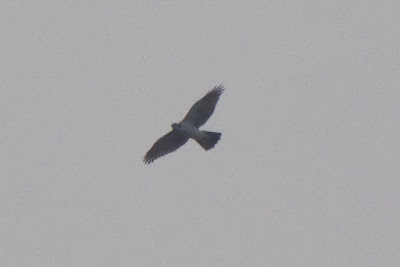 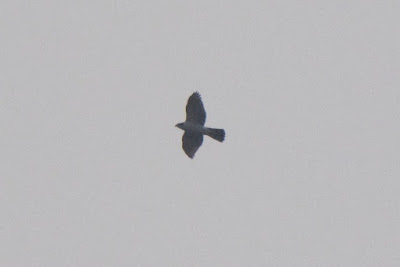 Later that day, we drove around the Wellsville airport perimeter to look for Snowy Owls (although they've never been seen there as far as I know).   It had some nice habitat though and I thought it would be worth returning at dusk to look for owls.  We did just that... we swung by at dusk and immediately found a SHORT-EARED OWL!  Here's a super-grainy photo showing it perched on the ground: 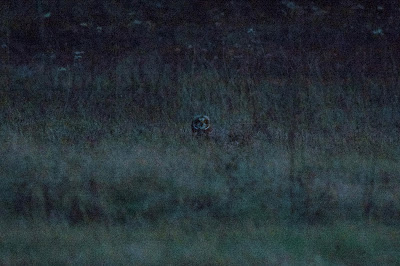 This is the first time this species has been eBirded in Allegany County but I suspect they occur more frequently.  After all, this is a species that one has to target during the right time of day, in the right season, in the right habitat.  It's no wonder that the relative lack of coverage around here hasn't yielded SEOWs before.  Oh, and the sunset from the airport was a colorful one too! 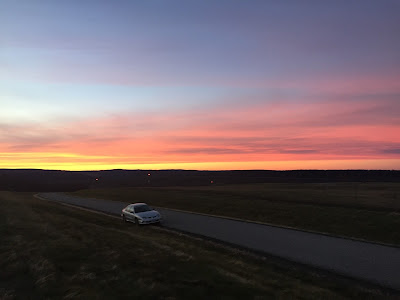 Ashley and I have been trying to explore some of the backroads around here which involves a lot of checklists of BCCH, DEJU, BLJA, and AMCR.  However, we found a nice field or two that was hosting this dark-morph ROUGH-LEGGED HAWK, only my third in the county: 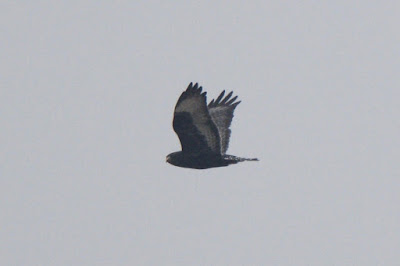 Although I'm sure there are a few around in Allegany County, I certainly wouldn't call it a common species.  This NORTHERN HARRIER also wafted by while we were in the same area: 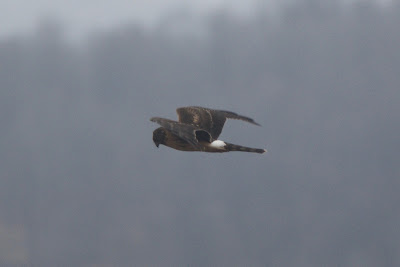 It might surprise you that this NOHA was the first December eBird record for Allegany County! 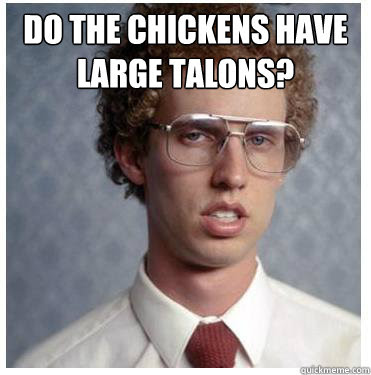 But not all of the highlights have been owls and hawks (or chickens) though.  Probably the best example is this CHIPPING SPARROW that Ashley and I found and photographed just to the south of Wellsville: 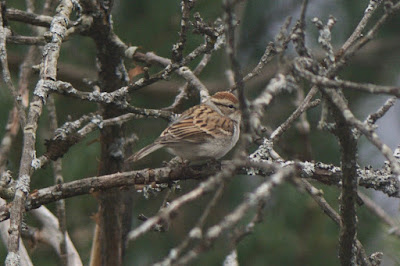 Although they breed here during the summer months, they should be well to the south by now and having one in this area is very uncommon.  In fact, here's a screen-capture showing how many December records there are for CHSP so far this month (hint: ours is the only one so far): 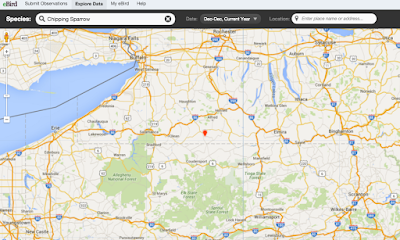 I find Allegany County interesting for its water... or lack thereof.  There's a very limited number of large bodies of water in this county.  But, perhaps, the ones that do exist would act a bit as migrant traps?  Just to east of Wellsville is a pond I grew up calling Browns Pond.  Turns out, the birding there can be productive if you time it right.  Although things were quiet on the balmy evening we visited it, the scene wasn't too bland: 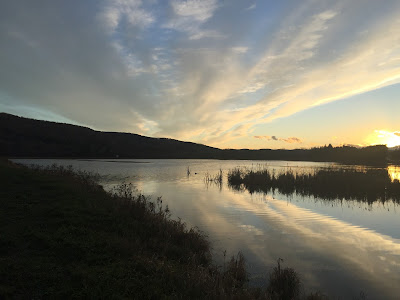 However, the main attraction in Allegany County is probably Cuba Lake.  It sits right on the western edge of the county (and so is a 40 min drive from here) but it's probably the best spot in the county to check for rare birds.  The pin marks the spot: 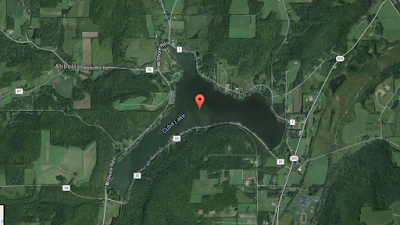 It's not a huge lake, it's about 445 acres or about 0.8 square miles (compare that to Lake Red Rock in Iowa that is 109 square miles!).  Despite the small size, it has an interesting history.  This man-made lake was completed in 1858 and, get this, it was the largest man-made lake in the world at that time!  Who knew?

Here's a panoramic view from the it's-really-not-THAT-impressive dam:

Fair warning though, it can be frustrating to look for access points to bird this lake.  There are a couple of spots though including this one: 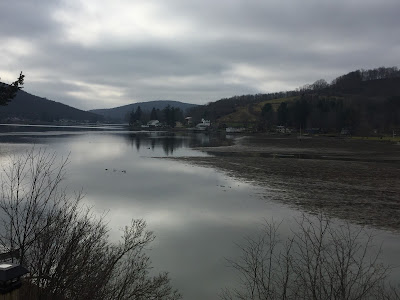 Despite the gray skies, you can see a good chunk of the lake from here (which is along the north shore).  You also can see a lot of mud in this photo which is a result of the lake management draining the lake 6-8 feet every winter (it's easier on docks and things when it freezes up completely).

We've seen about 65 species here at the lake which consists mostly of waterfowl.  During our 10 visits to the lake, we've seen things like:

In looking at past records on eBird, the lake has had other goodies such as Red Phalarope, all 3 scoters, 9 gull species including Franklin's, Northern Shrike, etc.

In truth, I haven't been taking many photos of the birds there.  Of the few, here's a RED-BREASTED MERGANSER I digiscoped with my phone/scope one day: 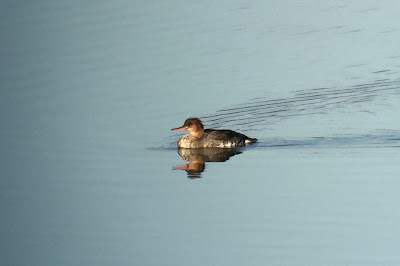 I'll end the post with a venture away from Allegany County.  One such visit was to the town of Canandaigua which sits at the northern tip of Canandaigua Lake (the 4th largest of the Finger Lakes).   The name is actually derived from Seneca (which I'm an enrolled member of) meaning "the chosen spot".  I didn't see a ton, honestly, besides some GREAT BLACK-BACKED GULLS and 4 continuing SNOW GEESE: 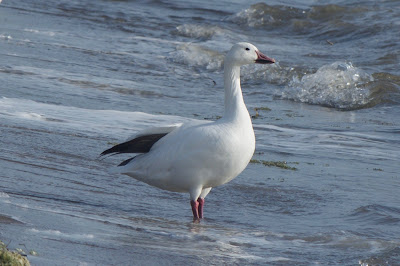 As an FYI tidbit, did you know that Kristen Wiig was born in Canandaigua?!  That's right, one of my favorite actresses came "all the way from the Finger Lakes".  Remind you of anything?