Although it seems a bit like a Hallmark Christmas card... it isn't.  It's just a male NORTHERN CARDINAL out the back window here in Missouri after a recent snow: 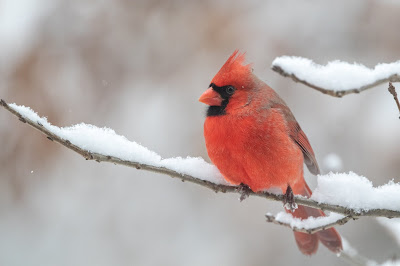 Well, ok, I've been back from Australia for a month or something now so there's no excuse!  To my blog I go.

20 Oct
The day I left St. Louis.  Flew into LAX.  Oh the humanity, what have we done to this planet? 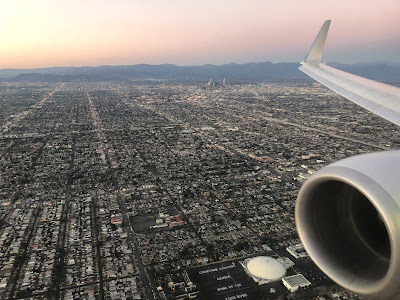 21 Oct
Whoops.  See, because I left LAX flying west, and because it was a 14 hour flight to Sydney and I jumped the date line, this day on the calendar DIDN'T HAPPEN FOR ME.  I skipped directly from the 20th to...

22 Oct
We landed in Sydney and had a long enough layover that John and I went out birding for a few hours.  One of the highlights?  This POWERFUL OWL, a species I had never seen before: 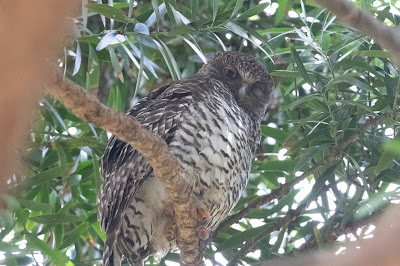 23 Oct
We had this day to scout some areas near Darwin which is where our tour was to begin in a few days.  I enjoyed hanging out with some fine FOREST KINGFISHERS: 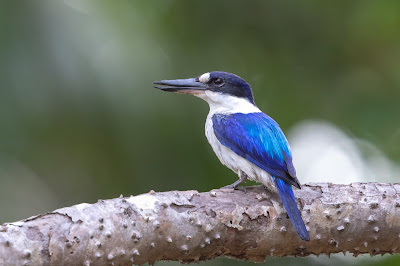 24 Oct
Today was another scouting day.  We had some nice looks at this MISTLETOEBIRD, a gorgeous specialist that feeds on (and spreads) mistletoe berries: 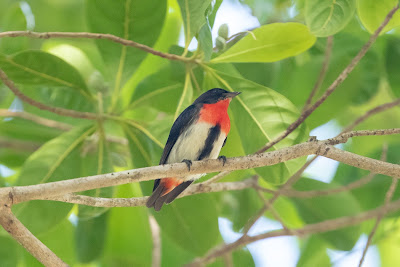 25 Oct
The tour began today and we took the group to the botanic gardens in Darwin straight away to see this stunner; a huge RUFOUS OWL glaring down on us: 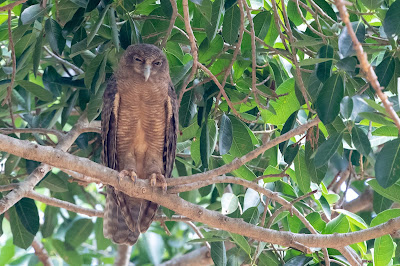 26 Oct
We birded around Darwin a bunch more, cleaning up on a lot of the specialties from the Northern Territory.  We also had a great fly-by by this BRAHMINY KITE north of the city: 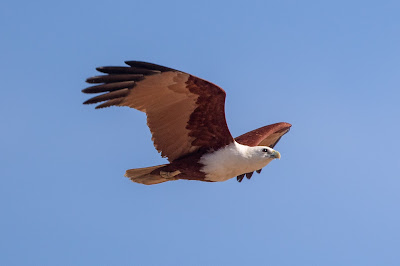 This morning we birded the Fogg Dam area and, although this photo wasn't my best from the epic day, I was probably most happy to see this species.  This lifer, seen here hiding under some of the vegetation, is a WHITE-BROWED CRAKE.  Can you spot it? 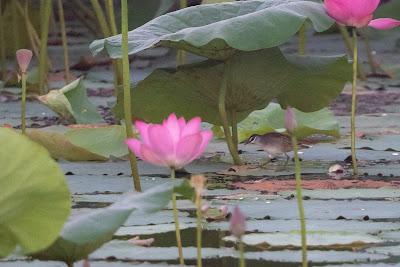 28 Oct
We flew from Darwin to Cairns this morning.  We spent that evening along the esplanade in Cairns which is a gorgeous place to be.  A highlight from our beachside walk there was spending a few minutes with this handsome RED-CAPPED PLOVER as the sun set: 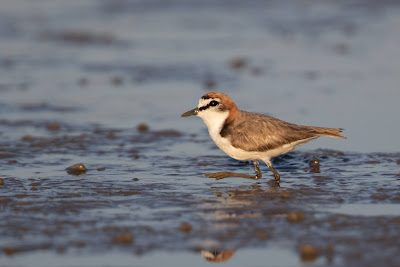 29 Oct
Today was a great day around Cairns with amazing highlights like point-blank looks at SOUTHERN CASSOWARIES and other goodies.  However, in the end, I'm deciding to share a picture I took in the shade at the Cassowary House of a PACIFIC EMERALD DOVE: 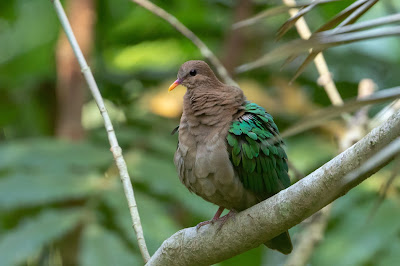 30 Oct
We stayed at the Chambers Rainforest Lodge a couple of nights and this lodge is surely one of my favorites in terms of birding on the grounds.  For example, this stunner, called a VICTORIA'S RIFLEBIRD came down to eye-level for us just outside the rooms.  This is in the Birds-of-Paradise family and yep, it lived up to its name: 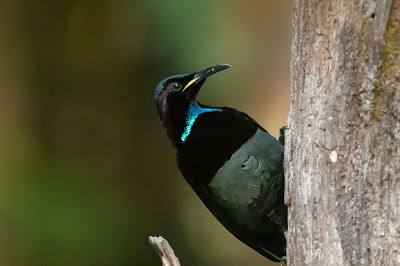 31 Oct
Trick or treat.  Today we left the Cairns area and drove west to the dry country near Georgetown.  On the way, we snagged this sought-after bird... the huge and flightless EMU.  A crummy pic but... meh: 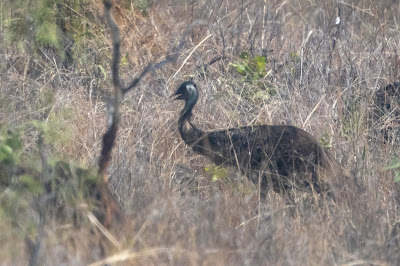 1 Nov
We woke up early and went out to some waterholes/ponds that attract birds and critters.  They have to drink water, after all, and that's hard to find out there.  Anyway, this pic isn't of a weird hawk or a hornbill or something.  No, this is a cuckoo... the largest cuckoo species in the world, the CHANNEL-BILLED CUCKOO.  Tower... this is Maverick requesting a fly-by..... 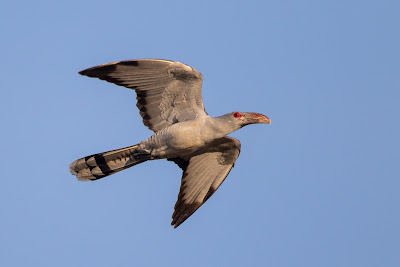 2 Nov
This was our final day in the Georgetown area so I had to make the most of an encounter with this RAINBOW BEE-EATER: 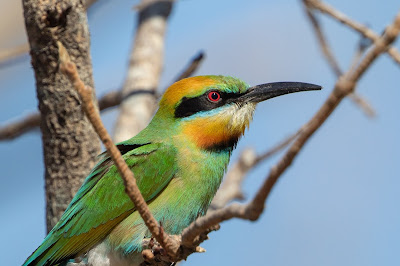 3 Nov
A year older today, now halfway between 30 and 40.  Anyway, remember the Cairns esplanade?  Today we drove back to Cairns where we'd be based for a couple of days.  Although picking a pic is especially tough for this day, I feel like I have to share this one.  It's a RED-NECKED STINT sporting some jewelry... it had been captured before by researchers!  We tracked down the info and found that this bird had been banded in Japan a month or two prior.  So cool to find random jackpots like that: 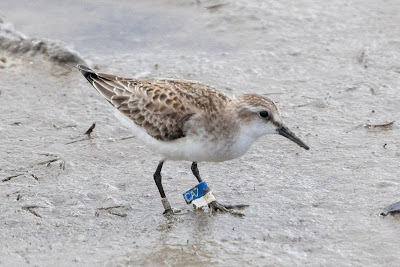 4 Nov
Today we caught a flight from Cairns to Brisbane.  Once in Brisbane, we got driven up into the mountains to O'Reilly's Mountain Lodge which is basically in Lamington National Park.  This place is magic.  Here, things like CRIMSON ROSELLAS come down and feed at your feet: 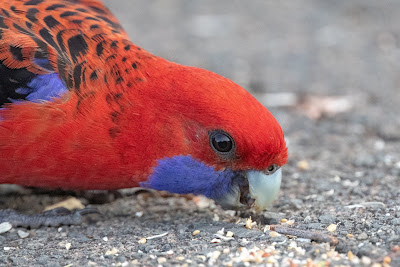 5 Nov
The entire day was spent birding around the lodge and Lamington National Park.  It was a great day with some amazing sightings like GLOSSY BLACK-COCKATOO and many many others.  In the end, I'm deciding to share this picture of a WHIPTAIL WALLABY.  Yes, it's a macropod... in the same genus as other kangaroos, wallaroos, and some species of wallaby. 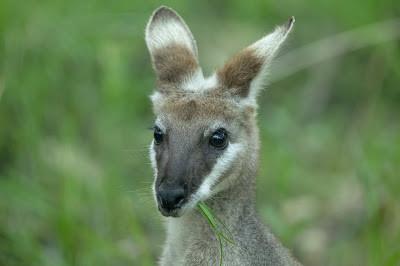 6 Nov
Today was actually the final day of birding on the normal tour (if you don't include the Tasmania extension).  Before we drove back down to Brisbane, we spent it around O'Reilly's again and one of the highlights was this vista from the Luke O'Reilly farm.  It really was a beautiful day:

7 Nov
For those of us continuing on the Tasmania extension, we had ourselves an early flight from Brisbane to Melbourne.... and then Melbourne to Launceston where we met our new driver.  We loaded up, started birding on this island state, and promptly found our first endemic... a species found nowhere else but Tasmania: GREEN ROSELLA: 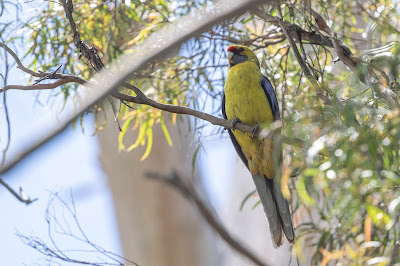 8 Nov
It was another day where it was really hard to pick just one photo.  We drove from Launceston over to the Mountain Valley Lodge which is one of my favorite places.  We saw a slew of endemic birds and some nice scenery as well.  However, top photo prize for the day went to this SUPERB FAIRYWREN with blues that nearly burned the eyeballs right out of my head.  Lovely bird, perched right outside our cabin: 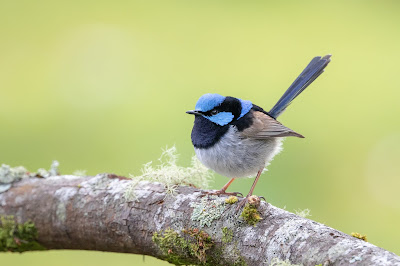 9 Nov
Today was epic for mammals... we saw a Common Wombat, Platypus, Short-beaked Echidna, Spotted-tailed Quoll, and even Tasmanian Devils!  The birding was top-notch as well.  However, I'm sharing a pic I took first thing in the morning at this amazing lodge; the air was crisp, a shroud of mist hung in the air, the sound of a gurgling mountain stream was offset by distant calling currawongs, and the mountainsides were a bed of huge and ancient ferns that seemed to house infinite mystery... I just love this place and I can't wait to go back: 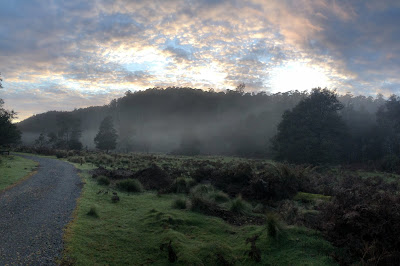 10 Nov
We said goodbye to the Mountain Valley Lodge today and made our way south to Hobart.  Along the way, we stopped and saw this BLACK-HEADED HONEYEATER, an endemic only found in Tasmania: 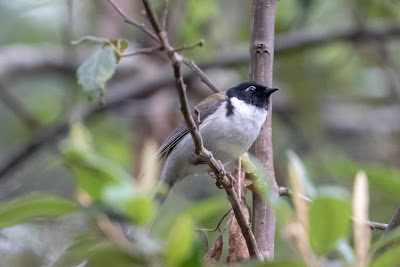 11 Nov
Today was exciting because we took the ferry over to Bruny Island.  It was there that we saw a variety of tough-to-see species like the endemic FORTY-SPOTTED PARDALOTE, the handsome HOODED PLOVER, the very rare SWIFT PARROTS, and many others.  However, being that it was our last day of birding in Australia, I feel like I have an obligation to share this iconic bird; the LAUGHING KOOKABURRA.  It's a huge kingfisher that eats snakes... among other things.  Yeah, they're amazing... and their laugh is a classic sound.  Cheers. 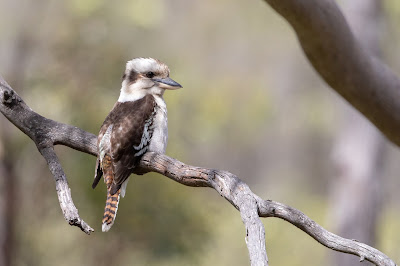 12 Nov
Woke up today at 4:00AM in Hobart, traveled for 25 hours, and went to bed at 11:00 PM at home in Missouri!  How is that possible... well, that pesky time-travel deal.  My 12th of November literally lasted between 30-40 hours!  Here's a picture of some chumps getting ready for the 14 hour flight from Sydney to Los Angles.  Oh, except I was a chump stuck on there with them! 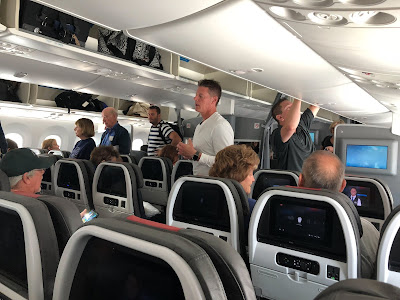 In all, it was a fun 3-4 weeks abroad!  We tallied something like 350+ bird species, 25+ species of mammals, and even some awesome dragons (which I haven't even shared here) .  You know, if you want to read ALL ABOUT THE TRIP, including way more photos (some of which you'd recognize now), you can read the triplist I put together.  The photos alone might be worth it (wink wink nudge nudge).  It's public and you can view it by clicking here.