It's hard to believe but this is the 500th post on See You at Sunrise!  I started this blog 7 years ago when I wanted to share highlights from our Costa Rica trip... and here we are still plugging along.

BTW, this post is being written in western New York State on a dreary, rainy morning.  The snow is all but completely gone but hopefully that means that woodcocks and other early spring migrants aren't too far behind.

It's true though, we directed our headlights eastward and drove back out to New York a couple of weeks ago... but not without trying for the then-reliable Kelp Gull in Ohio once more.  And, well, you already know how it ends: we missed it for the 8th time!  Like many visits before, there were some very eager birders willing to call this GREAT BLACK-BACKED GULL the Kelp.  However, we got photos showing too much white on the primary tips and so the crowd remained reigned in somewhat: 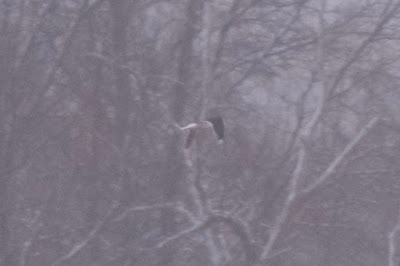 But the good news is, if you stayed at the lake all day and tried again that evening, the real Kelp Gull DID return (but we had already moved on).  You know, it takes real skill to miss this bird 8x!  If you want in on the secret, join us if we ever plan to try again.

Speaking of moving on... the roads that day were far from ideal!  That's the Great Lakes for you.  Here's an interstate with crap driving and 5 mph traffic speeds: 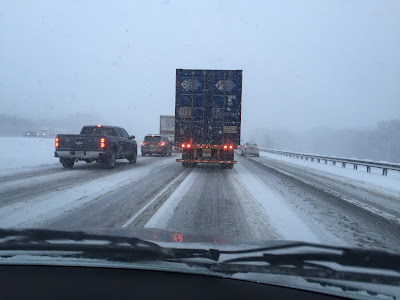 Once back in Allegany County, it didn't take long for us to explore the rural hills to see what winter birds were around.  Birding backroads around here is fun because they get so little birding coverage.  When we creep along, eBirding all of our sightings from every road we drive, it's almost like we're exploring a new land overseas where we don't know what's coming.  Our pins, even if it's for chickadees, fill in data gaps and it's both fun and fulfilling to watch your effort fill in range maps for these species.  Even though they might be common species, ALL YOUR SIGHTINGS MATTER when there is zero coverage.

Exploring these hills is fun.... but it's even more fun to explore them AND find sexy raptors!  On a hilltop just a few miles east of where I live, we discovered this light-morph ROUGH-LEGGED HAWK hovering in place: 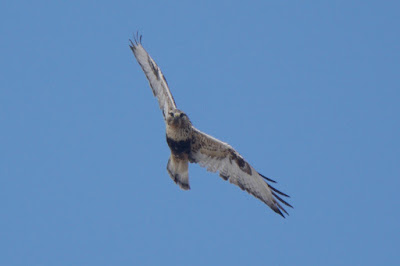 As it so happens, in the act of flying over, this northern buteo flushed a flock of HORNED LARKS and several SNOW BUNTINGS.  I had only seen SNBU in the county twice before so it was a welcome sight.

While we're on the topic of raptors, Ashley and I were just a few miles south of where I live when we picked up on some very distant black specks way up in the sky.  Can you make out what it is? 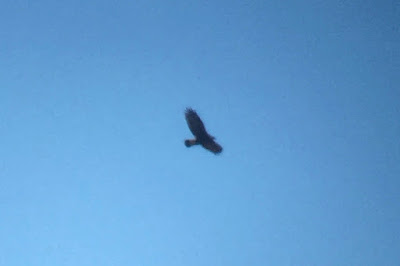 This, of course, is a GOLDEN EAGLE!  You can see the long tail with a pale base, very small head, etc.  At this time of year, they're most-likely migrants heading north (eagles migrate EARLY).  This is only the 2nd and 3rd record of this species for Allegany County in eBird; Ashley and I found the 1st back in December!  Again, it feels great to fill in some holes in the eBird dataset, this time for eagle migration.

Probably the biggest surprise came on one of our serpentine-shaped birding routes through the hills.  We spotted a pale gray bird atop a thorny bush: 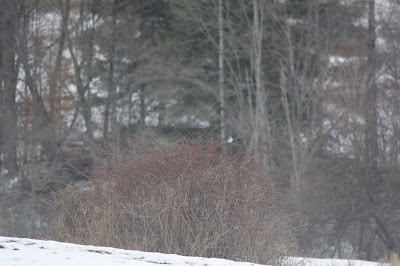 Instantly, we both thought "SHRIKE!" but... well, we were wrong.  Zooming in shows a different identity: 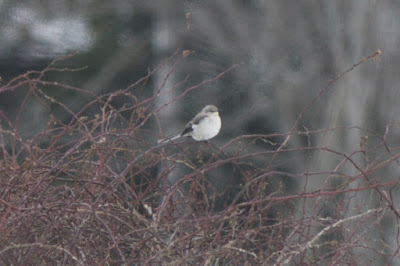 It was a freaking NORTHERN MOCKINGBIRD.  And no, I wasn't let down at all; I think mockingbird might even be a rarer bird in these parts at this time of year.  This was a new county bird for Ashley and only my second.

Being in the wooded northeast, we've stumbled across a few RUFFED GROUSE on roadsides nearby.  For me, driving over a rise and seeing a GROUSE sitting there waiting for you... it just doesn't get old. 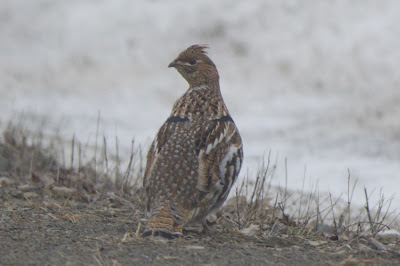 We'll often stop the car and get out if the wooded roadsides switch from barren deciduous forests to an area loaded with conifers.  In doing so, we've come across several GOLDEN-CROWNED KINGLETS and RED-BREASTED NUTHATCHES.  The latter, usually outnumbered by their white-breasted cousins around here, are always a nice splash of color: 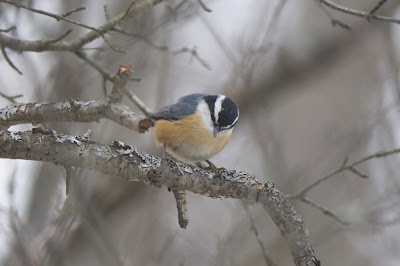 One particular nuthatch teed up on a spruce and I fired away.  Gorgeous bird. 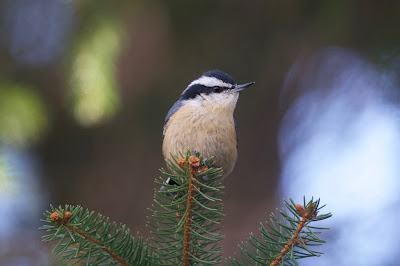 Although the snow has melted, we had a bit of an ice storm a while back.  It coated the trees, bushes, roads... whatever it could find: 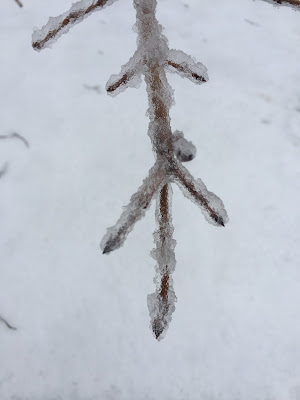 But after it coated everything, snow fell and stuck to the ice like mad: 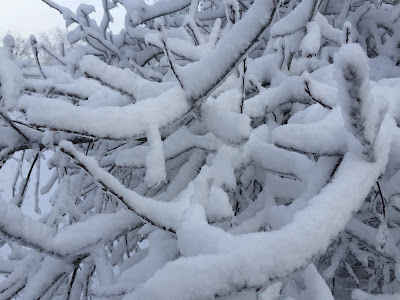 I'll leave you with THAT image instead of the brown, bleak woods of the present.

Between all the travels you've seen highlighted on SYAS so far this year, we've spent considerable time in NE Missouri at one of our home bases near Hannibal.

Truth be told, we haven't ventured very far afield lately which means mostly birding the property instead.  Although we're situated 7-8 miles from the Mississippi River, the property is mostly upland deciduous forest with several mowed fields bordered by cedar clumps and shorter scrub.

As one might expect for the dead of winter, the woods are a fair bit quieter than they were in May when cuckoos, warblers, and buntings were all in full song.  So far in 2016, we've tallied 32 species via 17 checklists here on the property which hosts a pretty standard package of expected winter residents.  Here's our list in taxonomic order:

You might think with us being so close to St. Louis that we get Eurasian Tree Sparrows here on the property... but we don't.  In fact, we don't even get House Sparrows (no complaints there)!  Along the same theme of non-existent exotics, we never see House Finches here either.  Instead, the native PURPLE FINCHES dominate at the feeders.  Here's a male hanging out with some goldfinches: 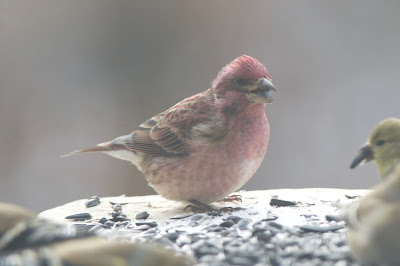 I honestly really enjoy having these finches around.  The hollow tek call notes you hear are a dead giveaway that they're somewhere nearby.  The females, although lacking pinks and reds, are marked with bold and blurry brown streaks on the breast, belly, and flanks while the head sports a white supercilium: 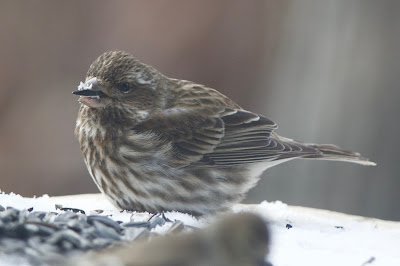 Although the feeders might have a flurry of activity one second, they might all scatter as soon as this bold and boisterous corvid comes swooping in.  This staple in backyards throughout much of the east is the all-familiar BLUE JAY.  Here's one as it adds seeds to its crop: 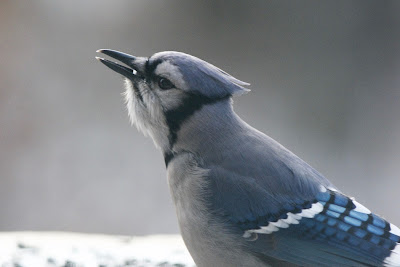 Are you familiar with what a crop is?  It's an expandable and muscular pouch in the esophagus that's used to temporarily store food.  This way, when a Blue Jay comes to a feeder, it can load up on seeds and then fly off and cache them at different locations.  Not all birds have crops though.  For example, gulls... no crop.  Owls and geese?  Likewise.

During one of our swings into Hannibal, we stopped along the river and took a look around.  Besides the many BALD EAGLES (a common winter resident in these parts) the river was mostly quiet; a small group of RING-BILLED GULLS flew lazily around the marina, a lone GREAT BLUE HERON was creeping along the edge, a small flock of MALLARDS came in to dabble around.  The only excitement, if you can call it that, was when a sizable flock of big white birds came flying over from the north.  It was a group of 27 AMERICAN WHITE PELICANS.  I quickly entered that into my eBird checklist on my phone (via the eBird app) and saw they were flagged due to the flock size.  I still had time before they were out of view and so I grabbed my camera and took some distant pictures as they continued south: 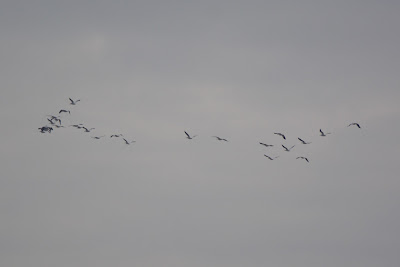 Even though they aren't super rare around here, I do my honest best to get proof ANYTIME something is flagged.  Here's a cropped-in version of 6 of the 27: 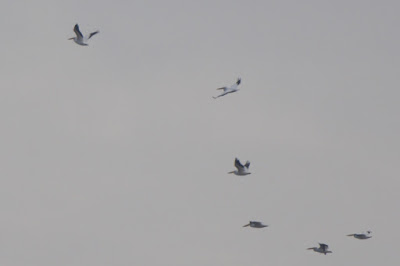 It's February!  And that means I updated my county list map (via openheatmap.com).  Here's how the map stands currently:


It might be hard to see the differences from the older version without having a side-by-side comparison.  However, I'll fill you in.  See the trail of blue leading from Missouri to south Texas?  THAT happened this month.

So in looking at my numbers, here are some basic stats.  First, eBird shows I have lists for 714 counties (or parishes, boroughs, census areas, etc).

The sum all of my county ticks together is north of the 13k mark.  This is essentially adding up every county list I have on top of each other.

So when I calculate a simple average number of species per county, I end up with roughly 18 species.  This number is pretty low due to me having a lot of counties with 1 or 2 species on the list (thanks to drive-by county listing).

So how many counties do I have with 1 species?  Or 2?  I looked at that as well:

I suppose it's not too surprising that 1-bird-counties is the highest category... but it's also a bit depressing that it couldn't be 5 or something higher.

So I like to think about goals... what is the best way to summarize these data?  Total ticks?  Total counties with lists?  Averages?  Modes?

IMO, it shouldn't be "number of counties" because, as I've shown, many of those county lists only have 1 species on it.  That's not impressive!  It's especially not impressive if you aim to get at least one bird as you drive through... and then trail off and not continue to add birds.  It adds color to the map, sure, but that display is nothing more than an empty shell of tiny-tick counties.

Maybe look at total county ticks?  I like that idea but I think the spatial side of things should have some weight too.  Otherwise, you can have a handful of hella-birded counties and have almost no spatial coverage across the country.  Whatever the measure, I think area (or number of counties) needs to be included.

I know others look at, starting from the bottom of the eBird county lists, consecutive numbering, starting with counties with 1 bird, then 2, then 3, and so on up the list.  How high does yours go before there is a break in the numbers?  I had never thought to look at my data that way but I checked recently and my first break is at 37.  In other words, I don't have a county list with exactly 37 species on it.  While this is interesting, I feel like one could then try to fill gaps by adding up to a total you need... and then cutting it off (and then that would leave ANOTHER hole where that number used to be).  Anyway, it's interesting to look at once but I doubt I'll keep up with this method.

I think a worthwhile goal is to increase your mode (or median for that matter).  Of course, this is only impressive if you have a lot of counties to work with.  In other words, if you have only 10 counties listed in eBird and your mode is 8, well, big whip.  My mode is 1 (sucks).  It'd be fun if I got it to 5 though!

Another valid goal might be to see how many counties you can get to the 100 species mark and beyond.  I'm sadly lacking with this method; I have only 30 counties in the 100+ category.