Update from the Sandhills

Well, everyone is long overdue for some pictures from western Nebraska. I apologize if the post doesn't follow any particular order!
So, what's the deal with those MARBLED GODWITS? They have been filing through pretty regularly these days. Today, for example, I had another 2 dozen heading north. Here is one near the refuge: 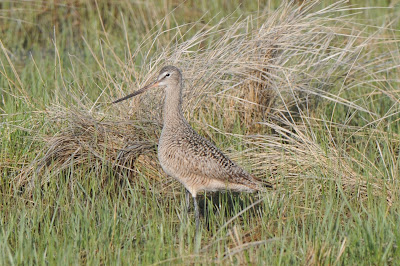 One big highlight was watching a SHARP-TAILED GROUSE lek from the blind here on refuge. Actually, it was the first time I had watched any prairie-grouse from a blind! What a neat experience! There were at least 6 displaying males: 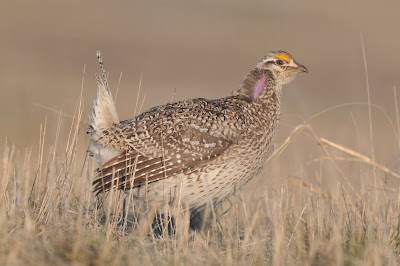 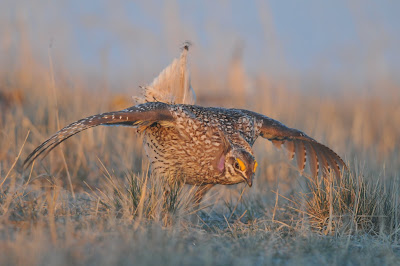 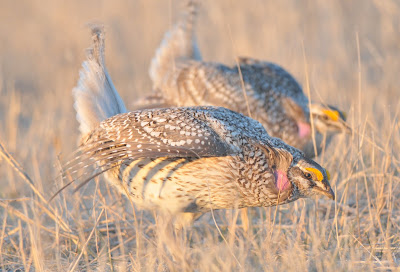 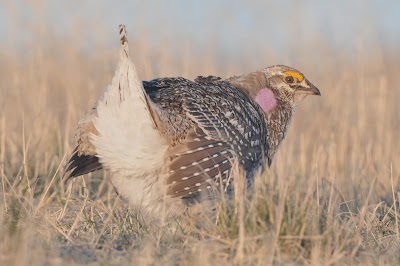 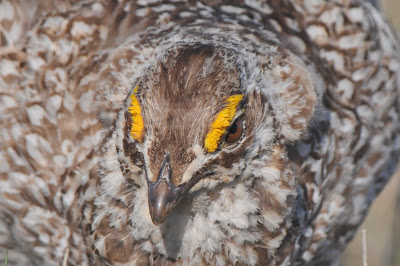 I might add here that while in the blind, I also had a fly-by CHESTNUT-COLLARED LONGSPUR and a couple singing SPRAGUE'S PIPITS. The joys of working in western Nebraska!
Personally, I always craved a comparison photo between LESSER YELLOWLEGS and GREATER YELLOWLEGS. Well, I took a stab at it: 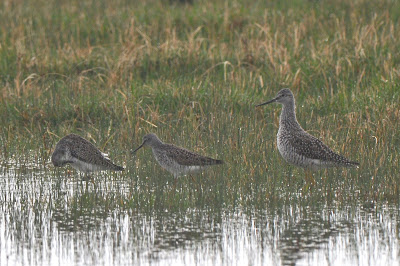 The BLACK-NECKED STILTS are back and breeding along Highway 2. Today, there was at least 2 pairs. Here is a picture of one from a week ago: 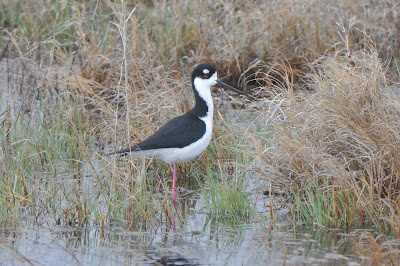 Just a couple ponds down the road from the stilts, something red caught the corner of my eye. Alas, it was a pair of CINNAMON TEAL. Don't let the range maps fool you... I only see about 2 pairs of CITE per season out here! I'm not sure why.... but I'll take them when I can: 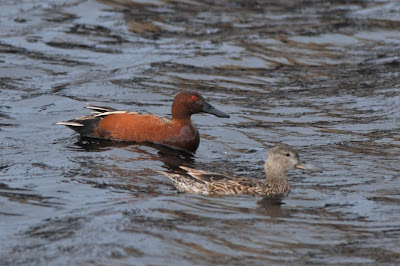 For some reason, I had never seen a FIELD SPARROW at the refuge before. Well, this obscured bird solved that for me: 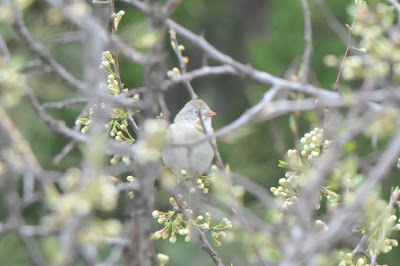 For the last couple weeks, a CATTLE EGRET has been feeding consistently around the same 3 cows to the north of the refuge. It was there again today: 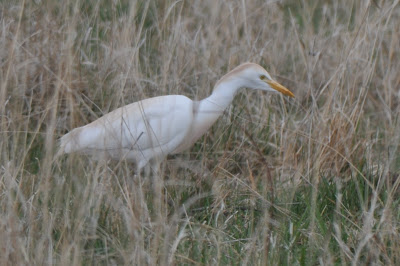 Really? Does this GREAT HORNED OWL just not get the idea? This pair of NORTHERN HARRIERS weren't too pleased about the situation: 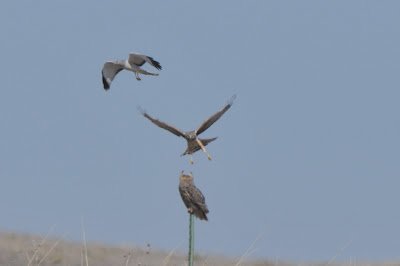 Speaking of owls though, here is a BURROWING OWL: 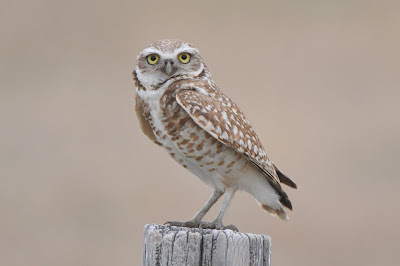 Well, we've been in western Nebraska for a little bit now. I wish I could update with dozens of pictures... but I can't at this point, I forgot my files back at the refuge! ANYWAY... here's what's new:
The curlews are back and paired up. Because all the sightings have been of pairs so far, I'm guessing incubation hasn't begun yet. I suspect things will pick up this week for sure.
Very few passerines have migrated into the area so far. In terms of warblers, I'm still stuck with only Yellow-rumped's, and they've all been Myrtle so far which is strange.
As in previous years, at least one TOWNSEND'S SOLITAIRE can be found around the houses.
The only new species for the refuge I've seen this year have been PURPLE FINCH and FIELD SPARROW. Although neither are considered rarities, I hadn't seen either of those species at the refuge before.
Shorebirds are just starting to pour in. Most recent additions have been many MARBLED GODWITS, WILLETS, AMERICAN AVOCETS, as well as the returning PIPING PLOVERS that nest on refuge. I'm still waiting for dowitchers and peeps. The nesting BLACK-NECKED STILTS are back along Highway 2.
In terms of owls, the vociferous GREAT HORNED OWLS are omnipresent around the houses as always. Also, BARN OWLS are back and can be seen in many of the owl boxes.
In terms of butterflies, I have yet to see anything different from the past seasons.
Hopefully next time I'll have some photos to go along with my post!
Posted by Cory J. Gregory at 4/23/2010 09:41:00 AM

Well, we've been back to Crescent Lake NWR for a day or so now. It's cold!

The curlews are definitely back along with several other species. We even tuned into one of our adult males wearing an adult transmitter collar that I attached last May! Hopefully he will lead us to a nest soon.
Some species we've already seen includes (but in no order):
Canada Goose
Lesser Scaup
Ring-necked Duck
Canvasback
Redhead
Green-winged Teal
Blue-winged Teal
Northern Pintail
Northern Shoveler
Mallard
Gadwall
Bufflehead
Sharp-tailed Grouse
Ring-necked Pheasant
White-faced Ibis
American Avocet
Long-billed Curlew
Killdeer
Greater Yellowlegs
Great Horned Owl
Red-tailed Hawk
Swainson's Hawk
Northern Harrier
American Kestrel
Sora
American Coot
Horned Lark
Tree Swallow
American Robin
Vesper Sparrow
Dark-eyed Junco
Western Meadowlark
Common Grackle
European Starling
Brown-headed Cowbird
Red-winged Blackbird
Yellow-headed Blackbird
As you may remember from last summer... I'm a hard guy to get ahold of out here. Best email me and I should be able to check my email once or twice a week.
Off to get some food before venturing back....
Posted by Cory J. Gregory at 4/17/2010 05:04:00 PM

Yep, it's that time of year again. This will be my last post from Iowa this spring. In a couple hours, we're off to western Nebraska to start my third and final field season of working with Long-billed Curlews.
Be sure to stay tuned, the next update will come from the public library (the only internet I'll have). In case you don't figure it out once you get to western Nebraska... let the sign remind you:

Ok, so usually I post things about birds... sometimes butterflies. However, I don't think I've ever posted anything about music. Well, things can change.
Ashley and I were lucky to see Atoms for Peace live in Chicago this past weekend. If you haven't heard of them, you're probably not the only one. The "supergroup" consists of Thom Yorke (Radiohead), Nigel Godrich (producer of Radiohead), Flea (bassist from the Red Hot Chili Peppers), Joey Waronker (who has drummed for REM, Beck, Smashing Pumpkins, Elliot Smith, etc), and Mauro Refosco.
You can see more about the concerts (including some footage of the band) at:
http://www.greenplastic.com/
Back to bird related stuff..... in other news, I'm in the final preparations for my annual trek out to western Nebraska. We'll be working with Long-billed Curlews for one more summer at Crescent Lake NWR. More on that later...
Posted by Cory J. Gregory at 4/12/2010 12:40:00 PM

Speaking of LOUISIANA WATERTHRUSHES, Ashley and I heard another on Saturday... this time in northeast Missouri (Riverview Park in Hannibal, to be exact).
Posted by Cory J. Gregory at 4/05/2010 09:59:00 AM

Always one of my favorite days of spring, today was the day I heard my first LOUISIANA WATERTHRUSH of the year. Taking me back to my days as a younger birder in eastern Tennessee (1996-99), this bird will always be etched in my memories of spring days along the rocky streams of the Smokies.
Oh, the bird was at Ledges State Park, just 15 minutes to the west of Ames. They breed there annually.
Posted by Cory J. Gregory at 4/02/2010 04:24:00 PM