Winter and a new year

It was probably about 7 AM and I was laying in bed.  Somewhere outside was a very rambunctious CAROLINA WREN singing away.

I should mention the date.  It was January 1, 2017.  You can't always choose what your first bird of the year will be but I'm happy with a wren.

Truth be told, I've been pretty quiet on my blog lately.  Ever since I returned from Australia, I've been busy trying to catch up with various things.  However, I figure I could share some recent happenings... although they're not filled with eye-popping colors from the tropics.

First up, northeast Missouri.  That's where I returned to after Australia.  This DARK-EYED JUNCO, a common wintering species here, was in the yard waiting for me: 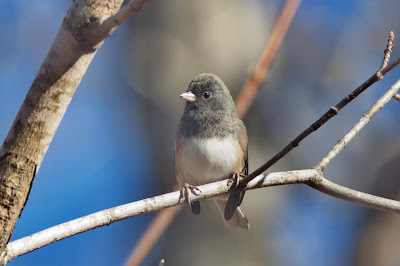 Then back in early December, we even had a nice snowfall here in the Hannibal area.  Having returned from 100 degree temps in the tropics, this cold white stuff seemed pretty foreign to me!  Enough so to snap a picture of a snowy field nearby: 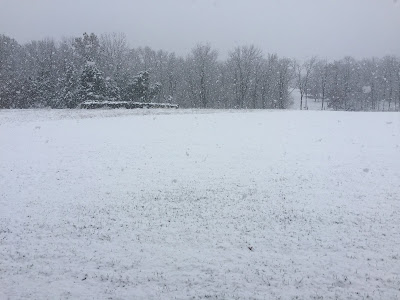 A few short days later, Ash and I found ourselves in western New York (one of my home bases these days).  Although we weren't there for birding, we managed to sneak out for some explorations in Allegany County (the county in which I was born).  If you aren't familiar with the area, don't worry, very few people are.  Here's a screen-capture of a map showing where my hometown is in the scheme of things: 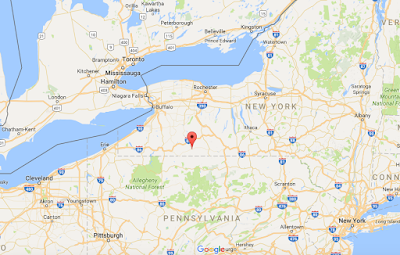 Probably the best birding location in Allegany County is Cuba Lake, a hotspot I've mentioned here on my blog before.  Ash and I, having birded this hotspot 22 times before, were eager to see the state of things there and so on December 7 we scoped it out.  Although the eBird filter was tripped with 3 COMMON GOLDENEYES and 131 HOODED MERGANSERS, the best sighting was this duck: 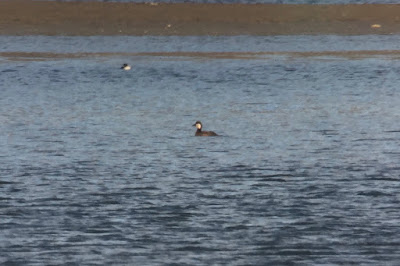 It's a BLACK SCOTER, only the 2nd record for Allegany County (not so surprisingly, the 1st record was also from Cuba Lake).  Here's our checklist from the visit.

Later that day, we saw another bird on a tree... but one that won't be going into eBird: 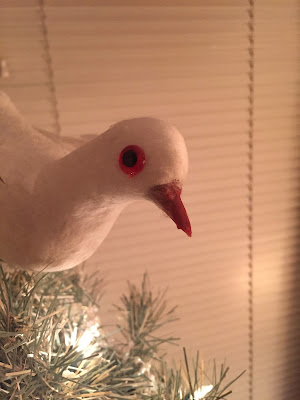 The following day we headed out for some more birding in Allegany County.  This time we opted to bird nearby hilltops (the only spots with open country; the valleys and hillsides are heavily wooded).  Anyway, we got lucky when this large accipiter flushed out of a tree.  I scrambled to get any proof I could and ended up with this pretty poor photo: 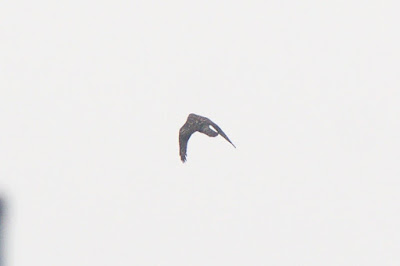 However, I can make out some white markings on the upperwing coverts on its left wing... this was indeed a young NORTHERN GOSHAWK.  This large, powerful, and uncommon species isn't usually easy to find and we were happy to have bumped into it.

Just a bit more down the road we found a mixed flock of goodies.  Mixed together were SNOW BUNTINGS, HORNED LARKS, and LAPLAND LONGSPURS.  I was surprised to see that even the larks were flagged in eBird; we had 70 of them!  Turns out, this was the 1st December record for Allegany County (in eBird).  Here's a diagnostic picture of one: 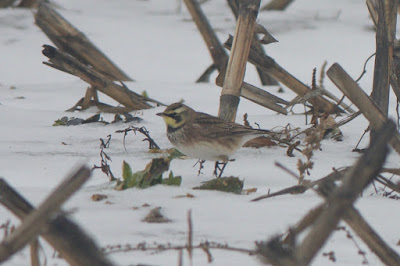 We also had 2 SNOW BUNTINGS mixed in, our 3rd Allegany County record.  Here's a poor photo with one on the right side of the pic: 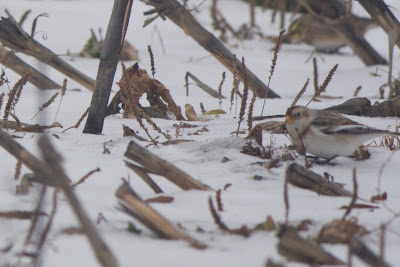 I think I was most pleased about the LAPLAND LONGSPURS that were mixed with this flock; we had 7.  Here's a photo of one of them: 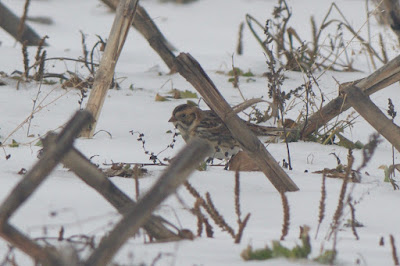 The longspurs turned out to be a new county AND state bird for me.  What's more, this was only the 2nd record all-time for Allegany County.  Take a look at this screen-cap of the all-time longspur records for this part of the state... not a whole lot happening: 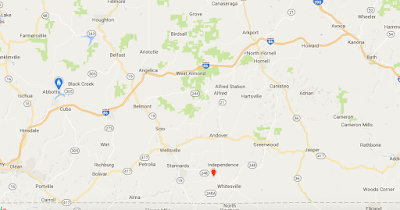 It's a bit silly, really, because these birds are probably around every winter in low density; it's just Allegany County suffers from very low coverage by eBirders.

A few days later it was time for another check of Cuba Lake.  This time we saw no scoters; maybe the Black Scoter had moved on.  However, the eBird filter was tripped by 4 late GREEN-WINGED TEAL and 115 HOODED MERGANSERS.  The only photo I took that day was of this LESSER BLACK-BACKED GULL mixed in with RBGUs and HERGs.  It shouldn't be too hard to find the dark-backed one: 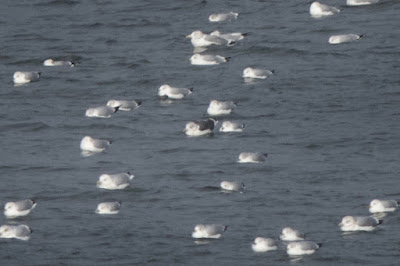 On our way home, we spied this ROUGH-LEGGED HAWK overhead: 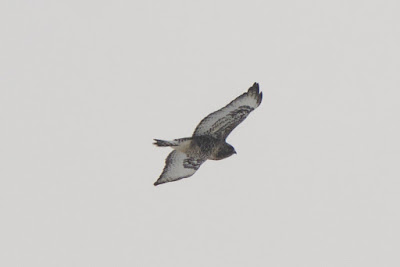 This species gets its name from its feathered legs (a feature shared only by Golden Eagles and Ferruginous Hawks here in North America).  Why do they have feathered legs?  Well, this species spends the summer in the arctic and the winter in the northern tier of the Lower 48 states.  That puts this species in cold weather an awful lot!  All of a sudden it makes perfect sense why this species would have built-in leg warmers.

Fast-forward to a new day.  Our last check of Cuba Lake came as we were driving back towards Missouri in mid-December.  This time, the best sighting was of this small falcon perched atop a spruce tree: 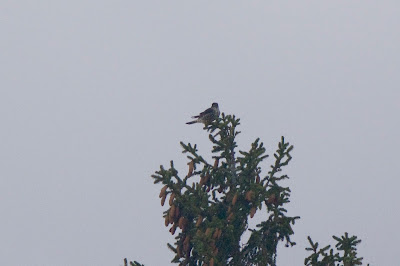 This little guy is a MERLIN and it represented the 1st December record of this species in Allegany County.  Otherwise, the visit to Cuba Lake was as expected; we had some flyover TUNDRA SWANS, a late GREEN-WINGED TEAL, a couple of GREATER SCAUP, and a RED-BREASTED MERGANSER.  You can see the full list here.

We made it back to Missouri in time to see a nasty ice storm descend on the area.  Schools closed, the highways were littered with wrecks, even driving to town was out of the question... so it was time to take some pictures of ice-coated grass: 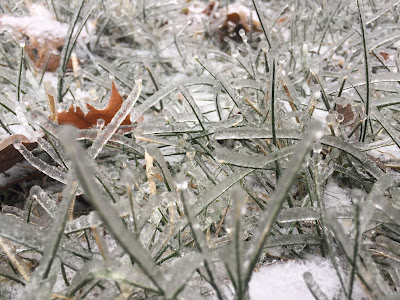 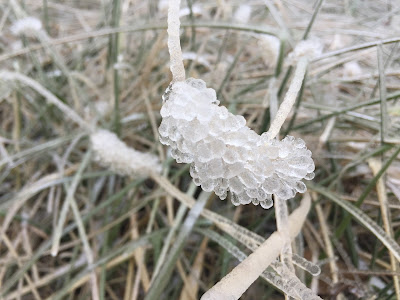 It was Christmas Eve when Ash and I decided to bird at Mark Twain Lake.  Would it be frozen over?  Maybe we'd find something notable?  After all, it's a huge lake with little coverage by birders.  Turns out, we found only a few things that were flagged in eBird; a lingering AMERICAN WHITE PELICAN and some BONAPARTE'S GULLS, photographed here poorly through my scope: 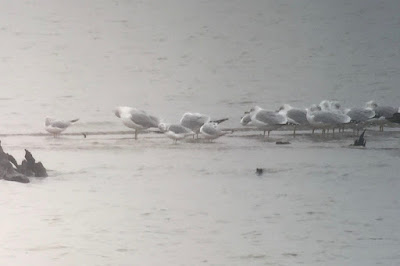 Fast-forwarding a week, we found ourselves visiting family in Waterloo, Iowa.  Although most of the highlights came from our games and fun indoors with my nieces, we also drove to a nearby lake where we had hopes, albeit slim, of refinding some uncommon winter owls.  However, it wasn't long before we stumbled on some other birders that were already there.  And lucky for us, they had found a couple of these owls!  What luck.

First up, we had amazing looks at two NORTHERN SAW-WHET OWLS; here's one squinting at us from its cozy perch: 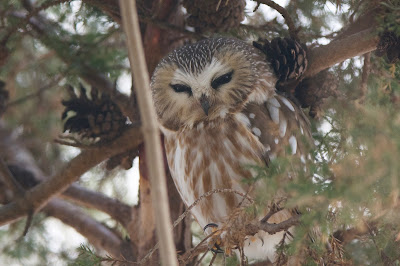 These little owls only stand ~7 inches tall and are the smallest owls in eastern North America.  Here's another photo of the little dude: 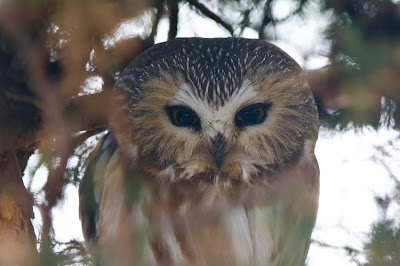 Showing such a neat species to my nieces was an absolute hoot!  We also were shown where a LONG-EARED OWL was roosting.  Although it was higher up and obscured by a lot of brush, you can see the bird facing right: 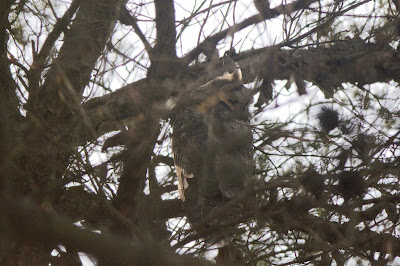 Ashley and I drove back to Missouri via a couple of birding locales in Iowa.  After no sign of the Slaty-backed Gull that had been seen previously near Des Moines, we headed to Red Rock Reservoir where we stumbled into a few things below the dam.  First up, this LONG-TAILED DUCK was still present from the previous day when someone else had found it: 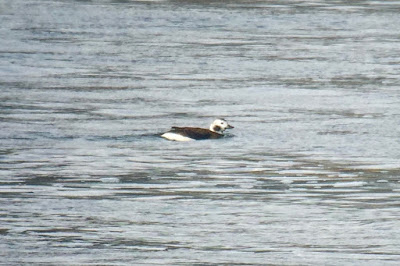 This species is pretty uncommon in Iowa (although, as it happens, Ashley and I saw one of these at this exact same spot about 6 years ago).

Also below the dam were two THAYER'S GULLS which trips the filter in eBird.  Although I somehow didn't manage photos of the adult we saw, this first-cycle bird perched nicely: 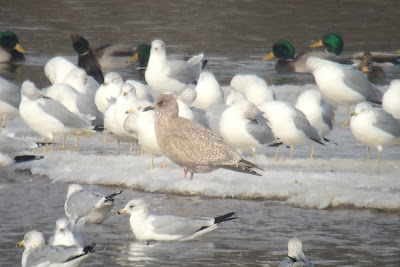 Fieldmarks that point towards THGU include the small bill, dainty head shape, creamy-brown color overall with fine, white speckling on the uppersides, dark brown primaries (not black), and white tips to the primaries.

Farther down the route towards home, we stopped in downtown Ottumwa to see the status of the river there (this spot CAN be great gulling when conditions are right).  We were surprised to find more than 1000 gulls.  Although the majority were Ring-billed and Herring, we found this first-cycle GLAUCOUS GULL standing taller than the rest: 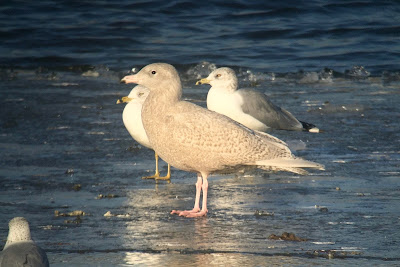 Standing taller than the rest?  Well, yes, this species is the second-largest gull in the world.  And funnily enough, Ash and I found a first-cycle Glaucous Gull here in December once before, 6 years prior!

The gull wasn't the only thing that was flagged in eBird there though.  This GREATER SCAUP was in the river too: 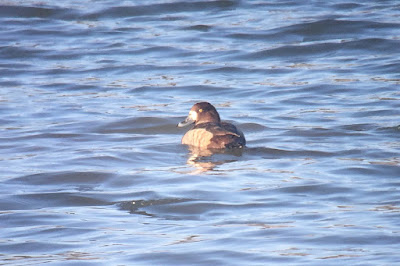 In eBird, this was only the 2nd Wapello County record. 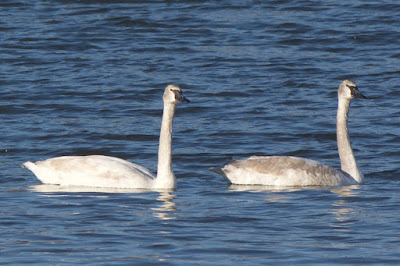 Last but not least, Ashley and I found this meadowlark near Hannibal the other day.  Although it was silent, I think it's fairly safe to call this bird an EASTERN MEADOWLARK based on the white malar: 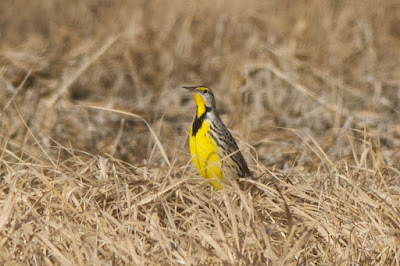 Of course, this wasn't flagged or anything.  But still, I think it was our first meadowlark in the area in several months.

But here we are, on the OTHER side of 2016.  I can't complain about the birding that last year brought my way.  In fact, 2016 was a lot of fun; it was the year that I started guiding for Field Guides!  Anyway, you know me and my love of numbers... here are some from last year:

World:  I think this was the first year that I topped 1000 species.  If I continue to guide, like I plan to, I don't think it'll be my last.  According to eBird, I added almost 430 species to my life list last year.

ABA area:  I ended up with nearly 540 species on my ABA year list which isn't so bad for not putting specific effort into year listing.  Also, I managed to add 14 new ABA birds in 2016.