Typical.  I was sitting at home watching Downton Abbey this evening when Doug called.  He suggested I drive to Tim's Pond... immediately.  I took his hint.

But first, a quick detour to the hotel.  I barged into the hallway and after yelling at a client in the shower the good news, there were two of us speeding towards Tim's Pond.  You see, Doug and his group had just found a JACK SNIPE and there were still a few of us birders on the island that desperately wanted to see this tiny denizen of marshes, bogs, and tundra.

We arrived at the spot, formed a tight line walking shoulder-to-shoulder, and moved in a sweeping formation around the edge of the marsh where it had last been seen dropping in.  Boom.  It flushed from right in front of me.  Like a bullet, it flew to the other end of the marsh but always staying rather low.  As it dropped down, I managed a feeble picture showing the bold, buffy stripes down the back, strong white trailing edge of the wings, and the short bill: 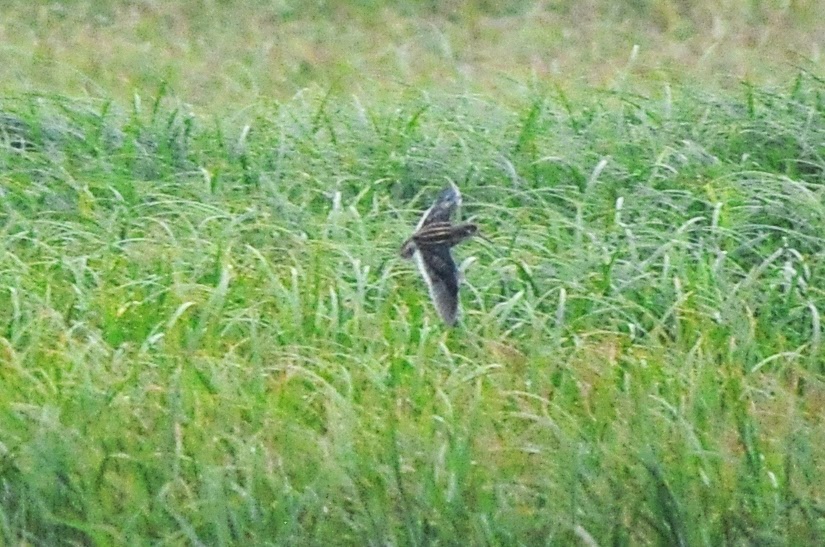 This is the 6th record of this tiny and secretive snipe here on St. Paul Island.  In fact, more have been seen here than anywhere else in the ABA area; I believe this is about the 13th-14th ABA record.  The first record from this island was in 1919 and was the first record for all of North America at that time.

If you want to see a truly amazing photo of this bird, I'd highly suggest this picture that Doug got.