At last light on May 6, a tiny hummer came into the feeders here at home.  When these tiny things fly in, they look like ants playing Quidditch amongst a bunch of locusts.  Anna's Hummingbirds are the most common here at home and they're GIANTS, relatively speaking.  After seeing the giants knock about for long enough, a subtle change in hummingbird size really jumps out at you.

I snapped a series of pictures but didn't have time to make any adjustments for the low light levels.  SO, I ended up with a series of seemingly black photos.  Nice one.

In editing the photos, however, I cranked up the brightness and shadow reduction and was able to make out... well, that it's a hummingbird: 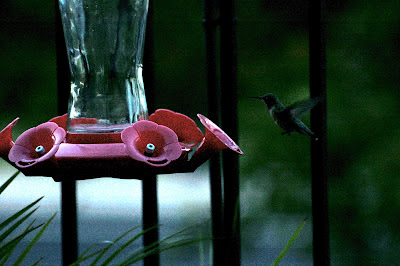 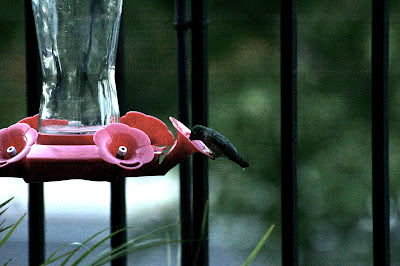 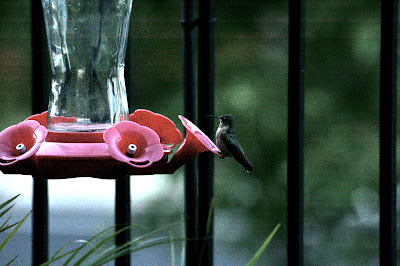 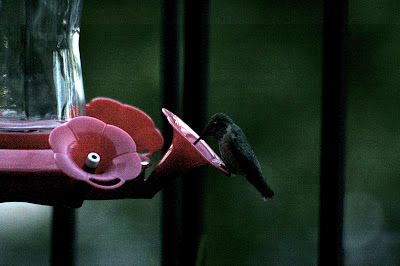 I thought it was probably a CALLIOPE HUMMINGBIRD based on size alone but didn't think the photos were good enough to prove anything.  Well, in fact, take a look at the length of the folded wings.  They come right up to the tail (and maybe extend past it a tiny bit).  That field mark eliminates all the Selasphorus species in addition to Broad-tailed.  That leaves me with, yep, a female CALLIOPE HUMMINGBIRD.

This morning, again in extremely low light, the bird returned and I managed a couple more crap photos: 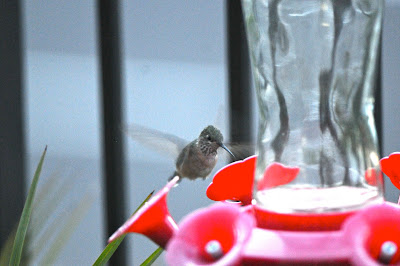 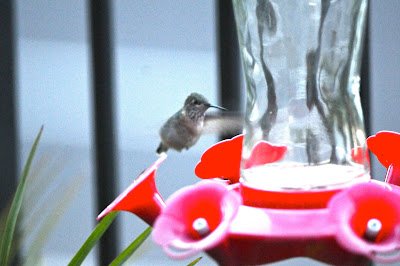 So, with yesterday and today in the books, that makes for 5 days this spring that my feeders have hosted a CALLIOPE HUMMINGBIRD.  Pretty cool for such an urban yard and a species that is flagged as a rarity here in Sacramento County....
Posted by Cory J. Gregory at 5/07/2012 06:01:00 PM

Although Saturday was a pretty lazy day (too windy!), we got out Sunday for a few hours.  Here's our tale:

I started out at a local park here in Elk Grove.  It would be funny if I took this picture of a WESTERN MEADOWLARK in someones yard.  It looks like a yard, don't lie.  However, it was in the middle of this giant grassy area within the park.  Weird grass to have a WEME singing from, right? 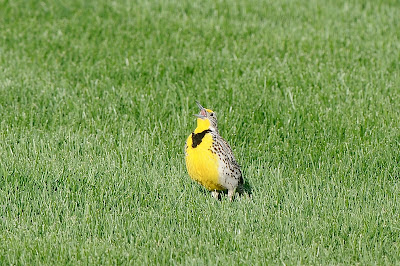 Apparently some GOLDEN-CROWNED SPARROWS are still sticking around.  They've been reliable at this park all winter but I'm guessing their days there are numbered.  Either way, they're looking pretty sharp these days: 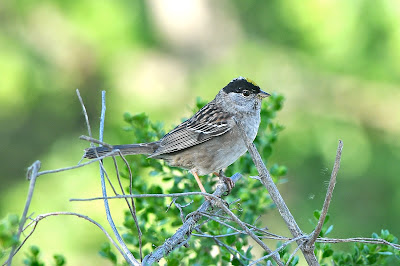 No, AMERICAN ROBINS aren't noteworthy here.  I will say, though, that a tame one allowing me to walk up to it isn't THAT common: 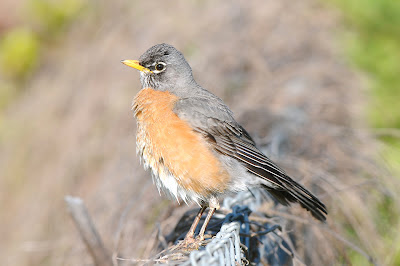 The default hummingbird species in the park showed well, as they typically do.  A male ANNA'S HUMMINGBIRD: 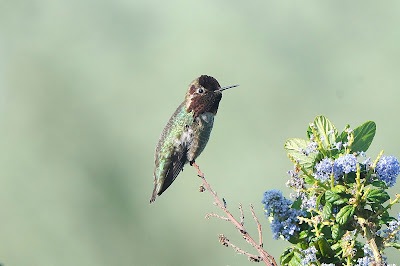 ... but wait, what's this?  Booya, looks like a RUFOUS HUMMINGBIRD, a first for me at this particular park: 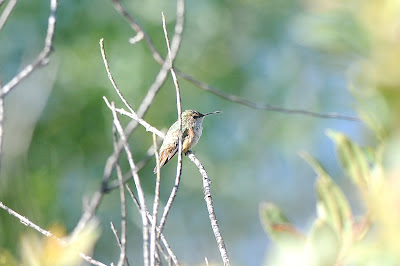 On my walk back to the car, I couldn't help but pointing the lens at this WESTERN KINGBIRD.  Yes, that's right, there is air in this park, and thus, WEKIs: 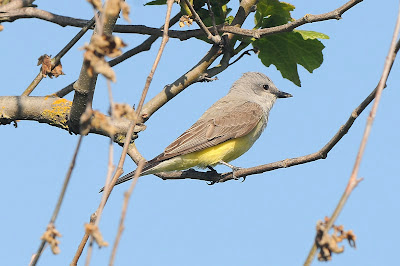 Later in the day, we headed over to extreme eastern Sacramento County.  Our target, loosely speaking, was to track down some LAWRENCE'S GOLDFINCHES.  The birding gods didn't hate us today and we fairly quickly found 1-2 on our way up Michigan Bar Road.  This was our FIRST EVER look at this species perched in the Golden State: 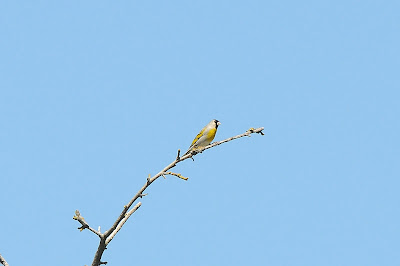 Driving over the bridge, the first bird waiting for us on the other side was yet another LAGO: 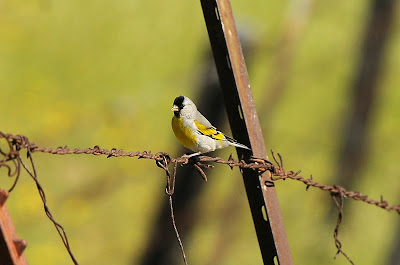 Sheepishly pleased with ourselves, we continued up the road to see what other things might be lurking up there.  Maybe the Brewer's Sparrows from last weekend??  Oh, first you have to sift through the common species like LARK SPARROWS: 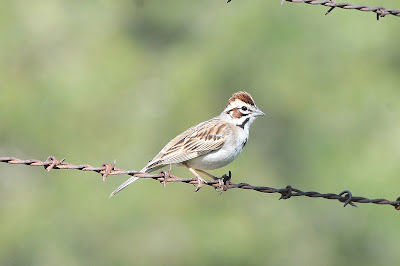 We took note of some blackbird flocks along the road, realizing that they were almost all TRICOLORED BLACKBIRDS.  Interesting. 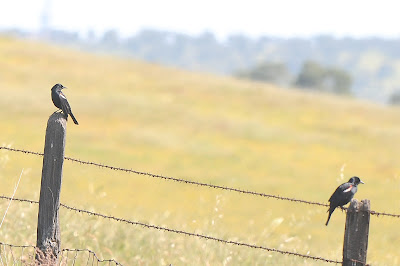 Ok, where I grew up and learned to bird, myiarchus flycatchers belong in woods, riparian areas, and the like.  Someone want to explain to me why this ASH-THROATED FLYCATCHER was at the top of the road, in open grassland?  Apparently there were more Ash-throated Flies knockin' about up there?  Anyway, did you know there are more than 20 species in that genus worldwide?  Woaha.  Anyway, back to the ATFL up in the grasslands: 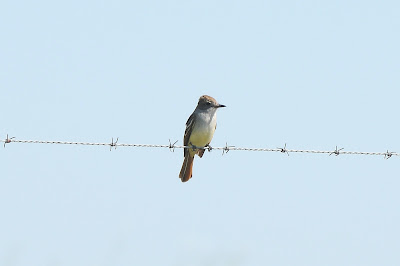 I still think this thing looks like it belongs in the arid deserts of the Middle East.  But no, it's just our local HORNED LARK.  Pretty snazzy endemic subspecies, eh? 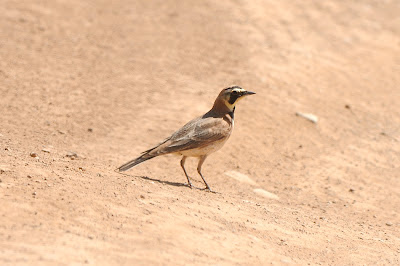 Coming back down Michigan Bar Road, I stopped to see if our local LEWIS'S WOODPECKER was on its favorite perch.  Woah, it was: 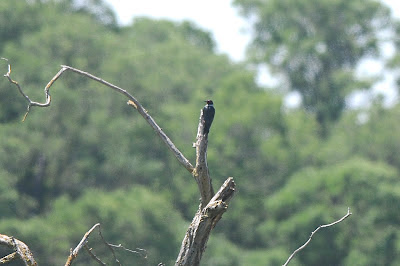 And in case we forgot about them, the LAWRENCE'S hoard awaited us at the bridge: 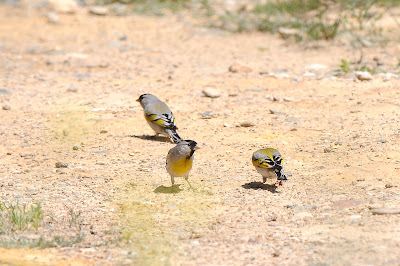 In case you have a hankerin' for some of these things, here's a map of the area:

We next drove down to Meiss Road, another road through grasslands in eastern Sacramento County.  Right around the 1.9 mile marker (from Ione Road), we found our target, a GRASSHOPPER SPARROW.  As you can see, this bird was intent on NOT going to its nest with food.  Hmm, wonder why? 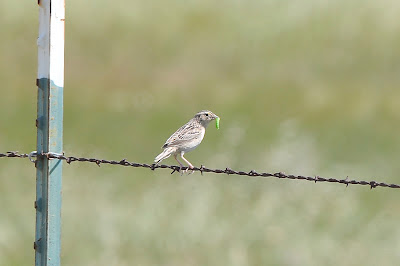 At the exact same spot, we flushed a small but long-tailed sparrow.  We were pretty on-the-ball this time when we saw this thing fly across the road.  "BREWER'S SPARROW", yet again.  We ended up finding three along that stretch of road: 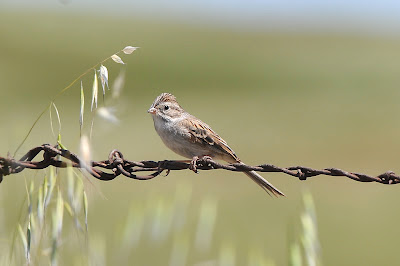 Given that it was a nice day, we continued down into Amador County.  Purpose?  I had never started a county list for this county.  Heck, I hadn't even HEARD of this county.  Anyway, we drove slowly around, looking like creeps, seeing how many species we could tally in an hour.  One roadside stop yielded things like BLUE-GRAY GNATCATCHER, WESTERN TANAGER, a BUSHTIT nest, and a bird singing the same stupid note over and over and over and over and over again.  Of course, some female HUTTON'S VIREO would have been a lot more impressed than we were  Here he was in all of his glory (ha, right, Hutton's Vireo?  Glory?  Ehhhhhhh): 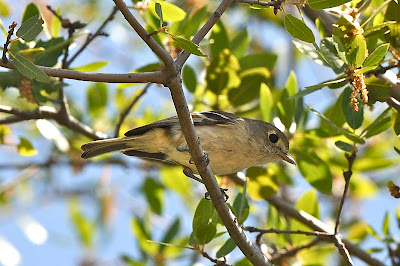 It's happened again, I've completely lost interest in posting on this blog.  :-(  In fact, the entire month of April went by with nary an update.  Why does this happen?

I think a lot of that is due to a) no one I actually know checks this blog, and b) I prefer to post photos to Facebook and Flickr.  Anyway, maybe I'll revive it this month.  Hold on tight, you might be in store for more than 0 posts.  Can you manage? 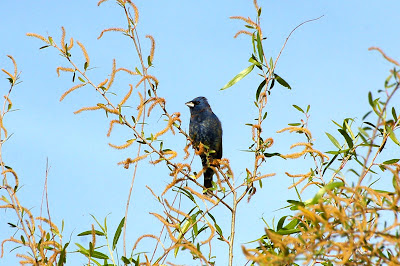 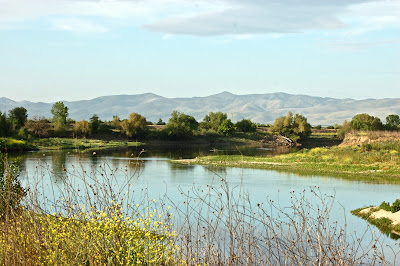 Last weekend I birded a little up in the foothills of eastern Sacramento County.  A couple of the LARK SPARROWS were tame enough for me to grab the lens: 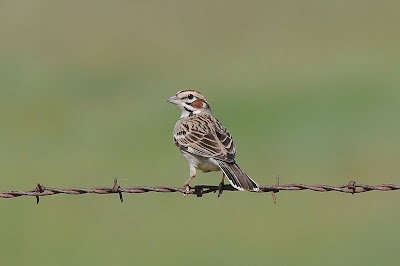 This bird, however, was a decent find.  It's a BREWER'S SPARROW, a rare spring migrant on this side of the Sierras: 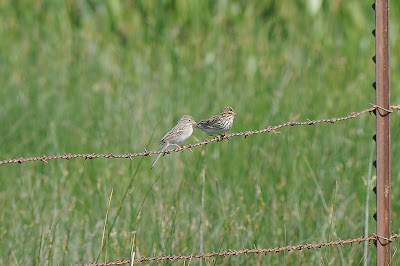 Last week I was fortunate to have four different hummingbird species at my feeders in one day.  Here is the star of the show, a male CALLIOPE HUMMINGBIRD: 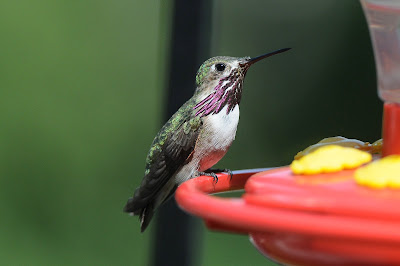 I've been startled with how numerous SWAINSON'S HAWKS have been in recent weeks.  In my experience, they are outnumbering Red-tailed Hawks by at least 5:1. 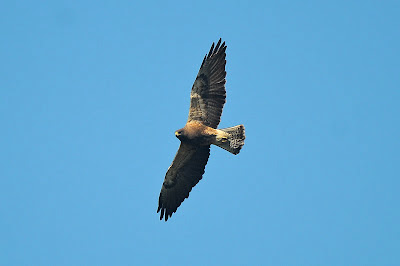