We do a lot of thinking about vagrant birds here on St. Paul.  After all, that's one of the reasons why birding here is so intriguing (and popular).  It's far too broad of a topic to discuss in depth here but having been into birding most of my life, and hoping to see rare birds for much of it, being here for a season opened up all sorts of possibilities for new life birds.

Although most of the species we see here have been seen here before, there was always the chance that a vagrant would show up that has never been seen here before.  Maybe it would come from the east... maybe it would come from Russia or from Asia.  Who knows!  Well, our latest vagrant was a very rare one indeed, a new island record!  Doug and Scott found a COMMON CHIFFCHAFF at Hutch Hill yesterday!

This was only the 4th or 5th time this species has ever been seen in North America and was the first time it's ever been seen away from St. Lawrence Island.  So yes, when something that rare shows up, it's go time.  I was with a client back in town and when we heard the news, we strapped in and rushed to the scene as fast as we could.  Long story short... I managed to see the bird but not very well.  We all returned again today and this time, thankfully, saw the bird much better.  Although I haven't managed pictures of it yet, Doug's checklist has some sweet and IDable photos.  I wonder how long it'll stick around?

We had another new arrival yesterday but this one not so gripping, DARK-EYED JUNCO.  We had one in the road up near NE Point and then another in the lower cut at Polovina Hill.  Here's a grainy picture of the latter: 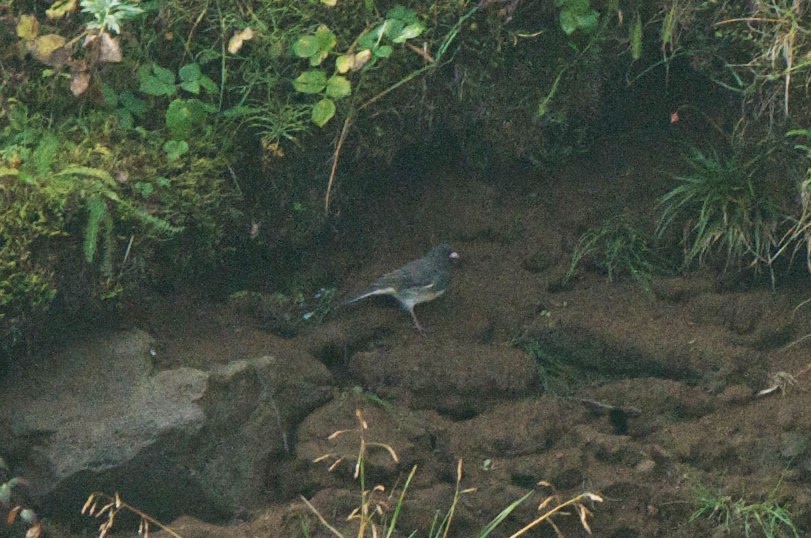 Another bird in the lower cut was this FOX SPARROW, a fairly expected migrant this time of year: 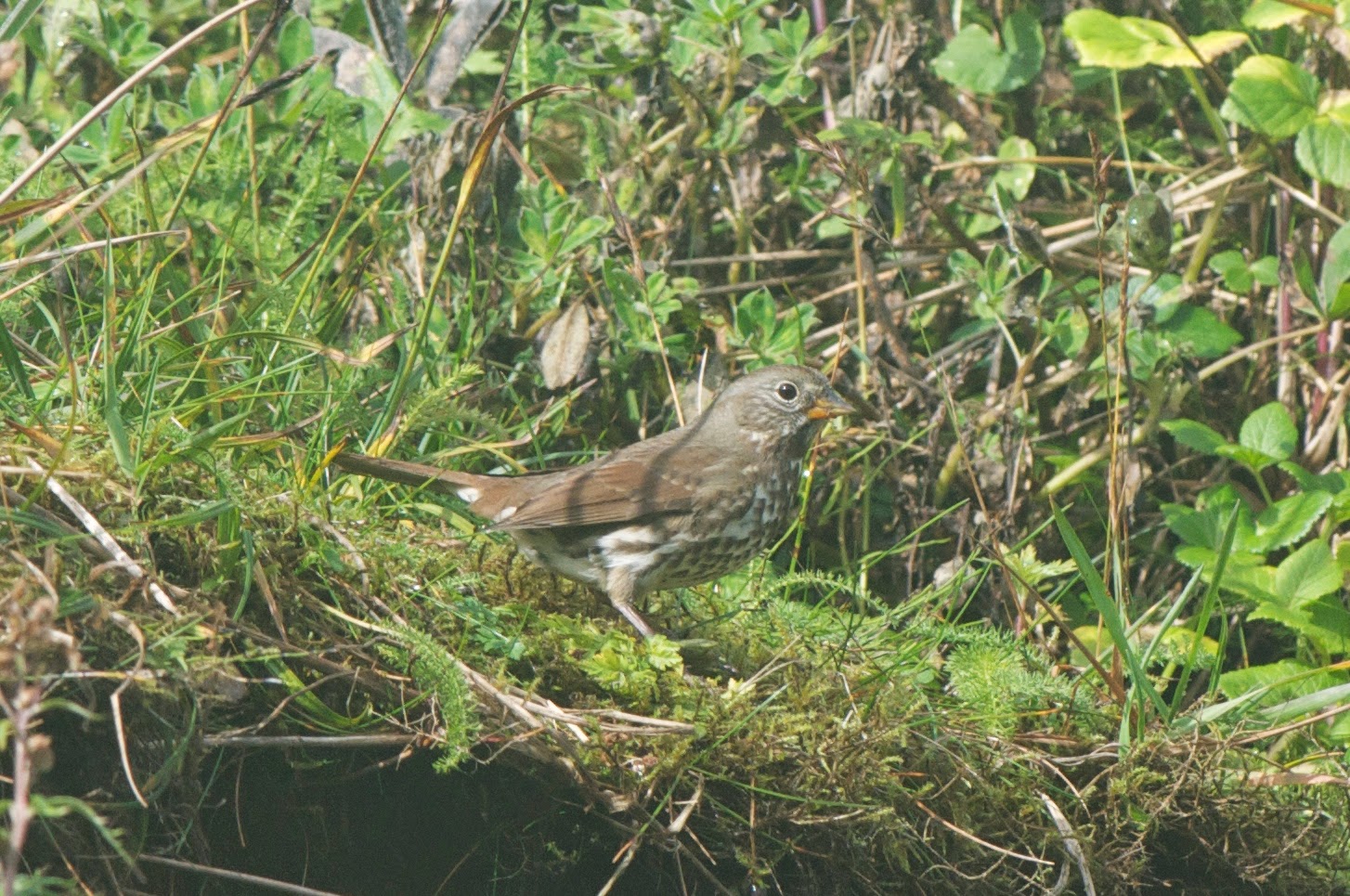 Although the junco and sparrow look at home scurrying around in the vegetation, remember that these birds literally flew hundreds of miles over a rough ocean and managed to find this speck of land in the Bering Sea.  It's rather remarkable when you pause and think about it.

We also noticed an increase in PACIFIC GOLDEN-PLOVERS yesterday; we saw between 30 and 40 in the Novastoshna area.  Here are a few of them: 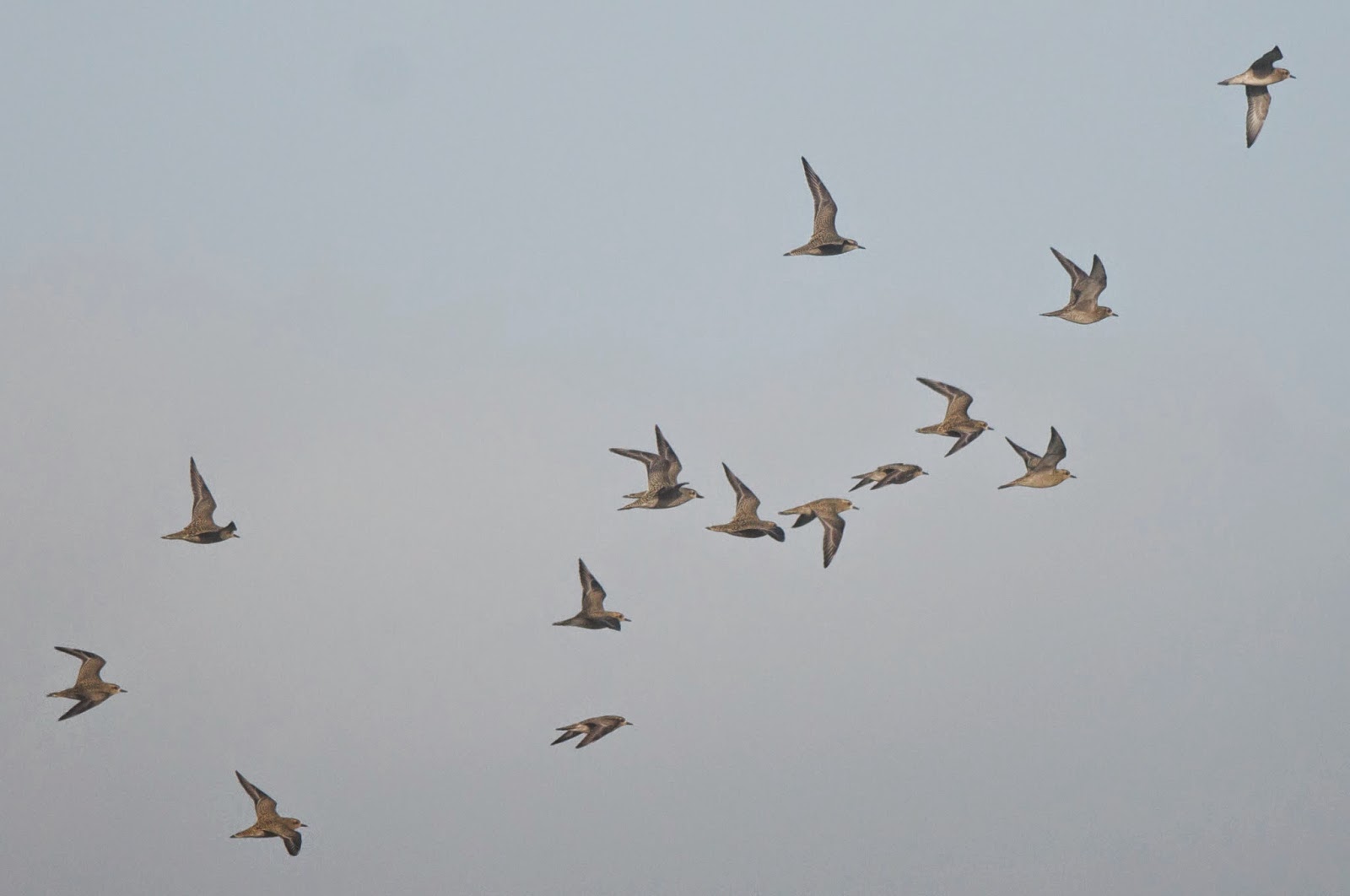 One of the places we check every single day, rain or shine, are the crab pots.  Crabbing is one of the main industries in the Bering Sea and is a major part of life here on St. Paul Island.  The snow crab season doesn't begin until winter and so in the meantime, they stack the crab pots in big stacks here on dry land.  You can't miss them stacked along the road between the airport and town: 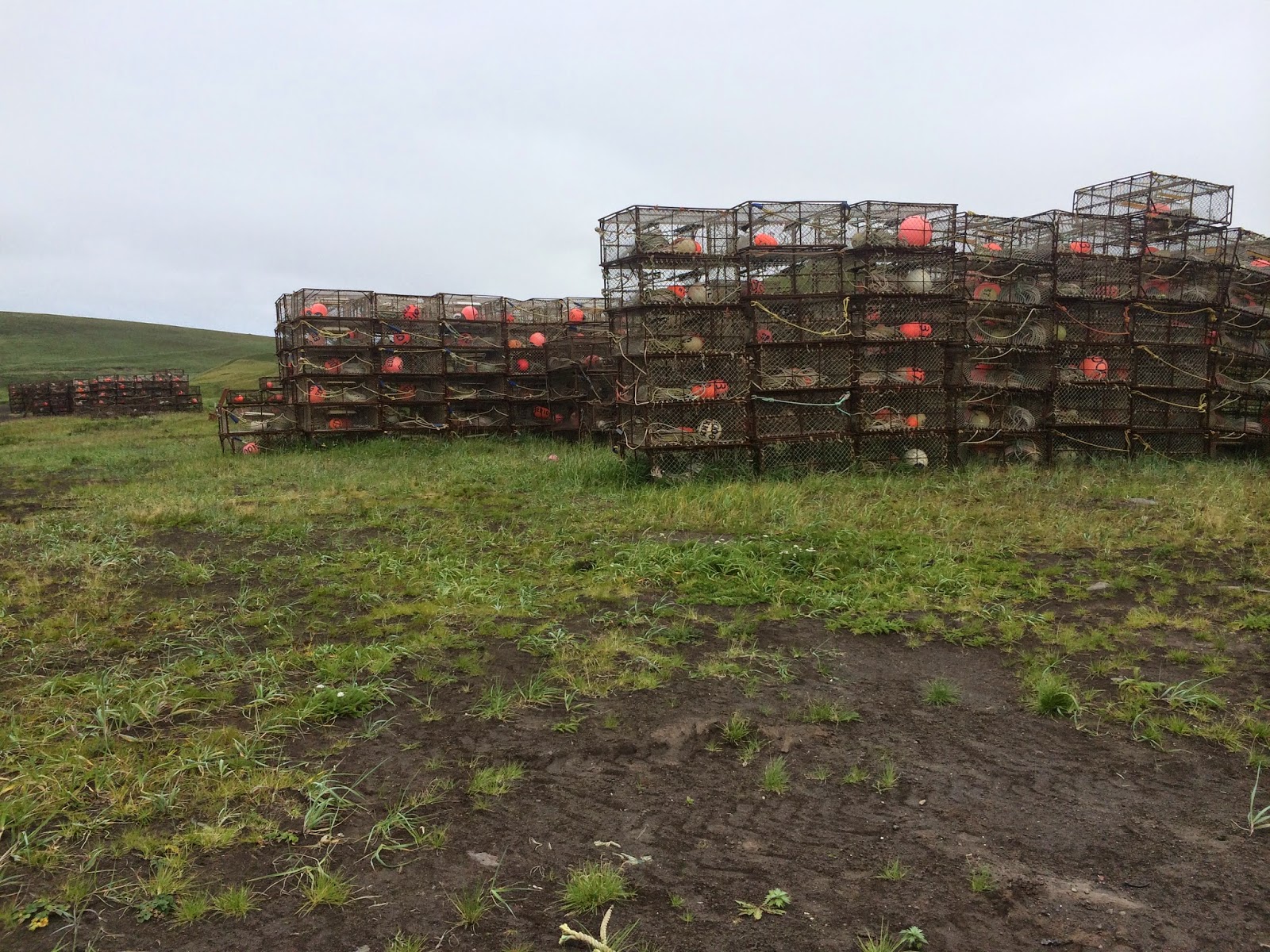 The reason we check these for birds is pretty simple; some birds get blown here by storms and many are probably extremely tired, looking for trees and other forms of vegetation to rest and feed in.  Well, we don't have trees on St. Paul Island and one of the only things here that stands tall and has plenty of structure, like trees, are stacks of crab pots.  Regardless of the wind direction, birds can always find a quiet place out of the wind and rain somewhere in the rows of crab pots.  Looking again at these stacks, you can see there are narrow corridors between the rows of pots: 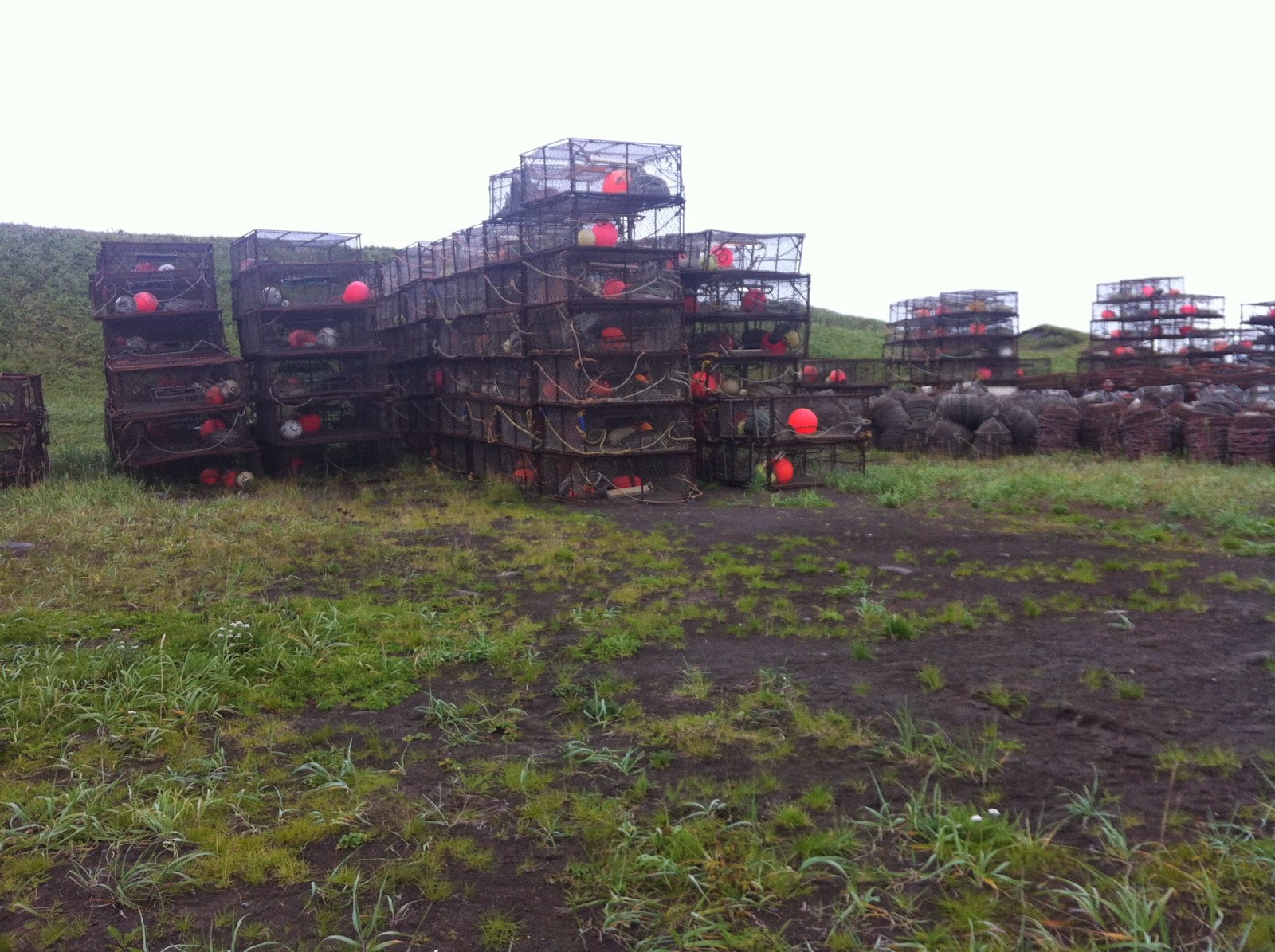 Let me emphasize that these are not small, light, or flimsy.  Each crab pot weighs about 750 pounds and that's without the 60 pounds of rope that's stored inside.  Looking down a row of crab pots, you can see how high the stacks reach and how many nooks and crannies there are for birds to hide in: 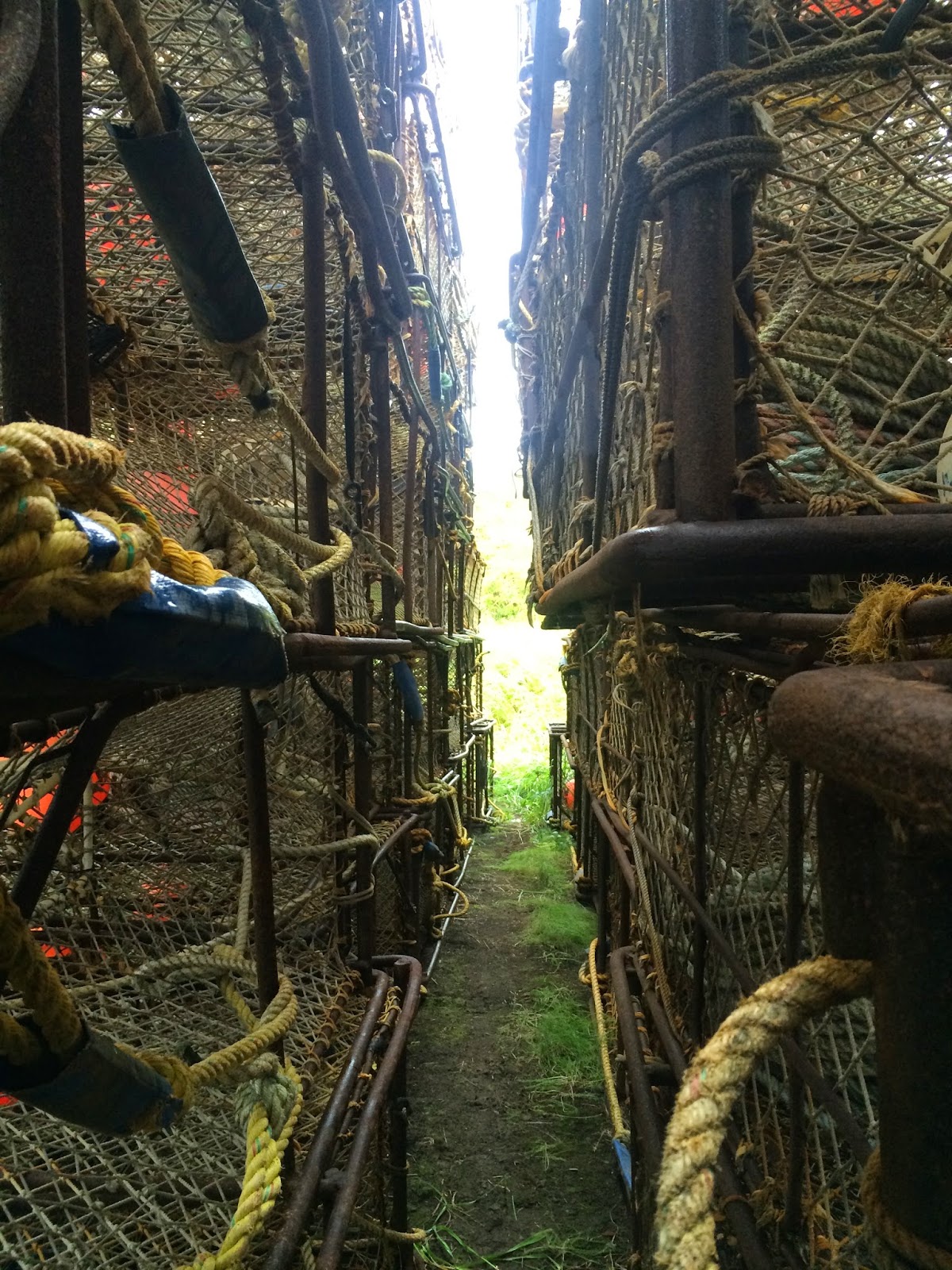 What we do is walk every row, hopefully flushing the birds from their perches and into view.  Here I am standing between two rows of pots.  You can see that each pot is between 2 and 3 feet tall.  Some rows have pots stacked 7 high and so we're talking nearly 20 feet of cover for birds to use. 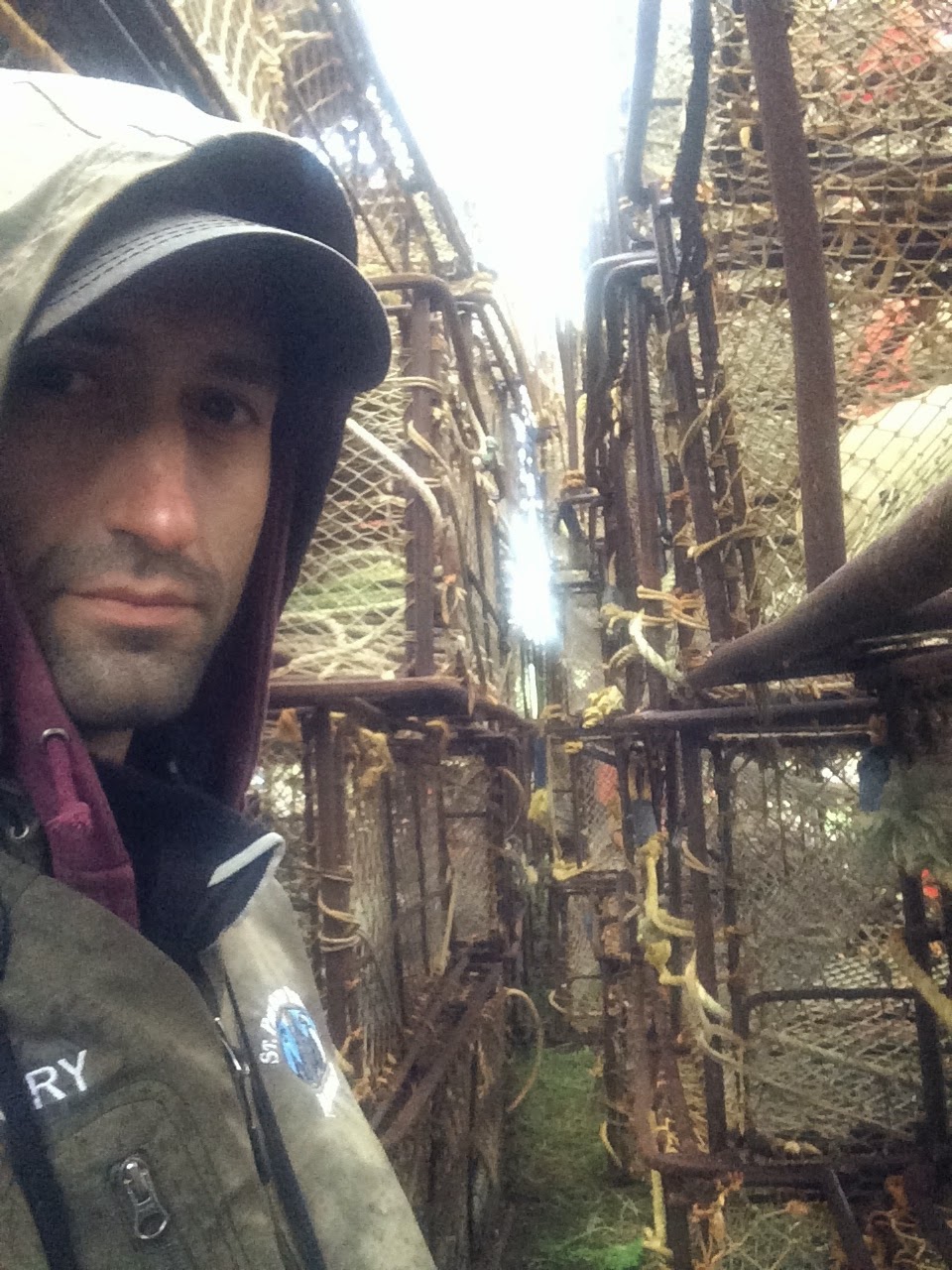 The list of rare birds that have been found in these crab pots is lacking neither in quantity or quality.  I'll start with the rarest ones, the Code 5 species:

And here are some stellar Code 4 species:


So yes, THAT is why we check the crab pots every day!

--WARNING, the following images will cause angst among your local Northern Fur Seal populations--

Lastly, I thought I'd leave you with a series of pictures of KILLER WHALES hunting seals off of Zapadni Beach the other day.  This was by far the closest I've seen them and they also showed a bit more than just their dorsal fins this time; for example, their flukes: Each lobe of the tail is a fluke, so in fact, one tail has two flukes: 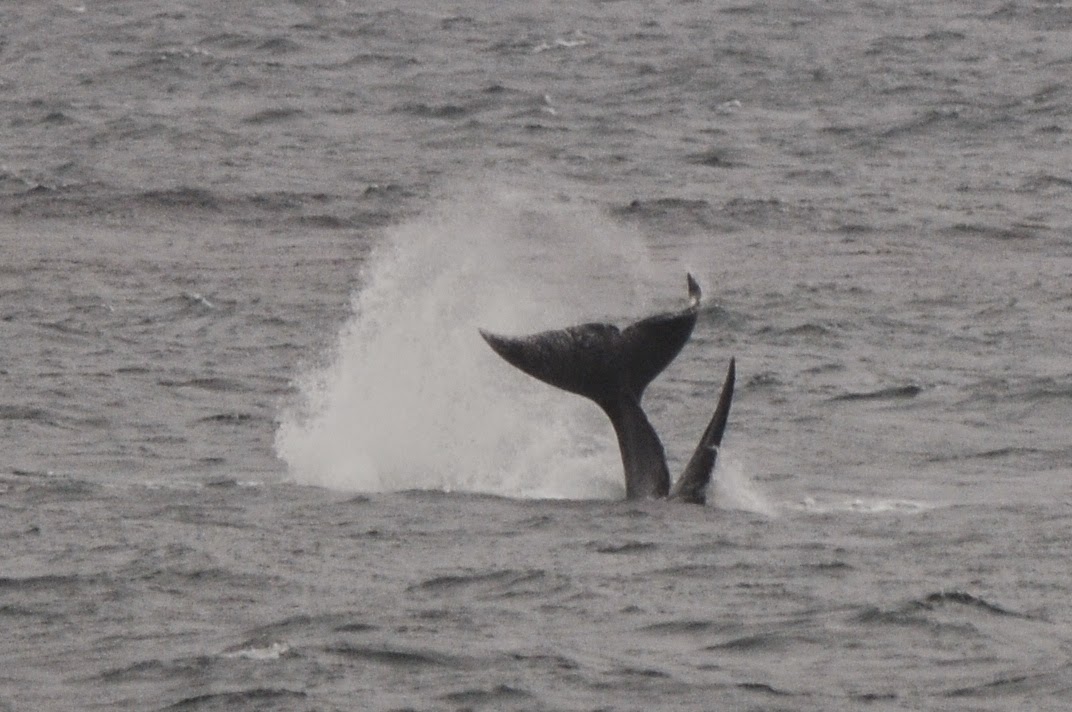 Here's a dorsal fin of a female; note how it's curved at the top, not straight up-and-down like a male's: 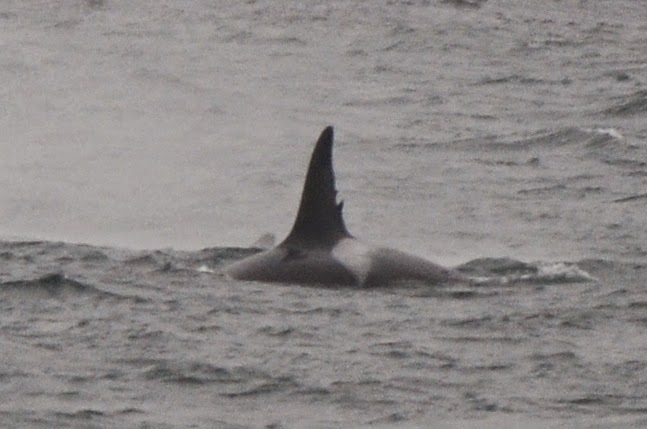 In contrast, here's the tall dorsal fin of a male.  Their dorsal fins reach the full height in about 15-25 years; this particular fin is about 5 feet tall, to give you some size reference: 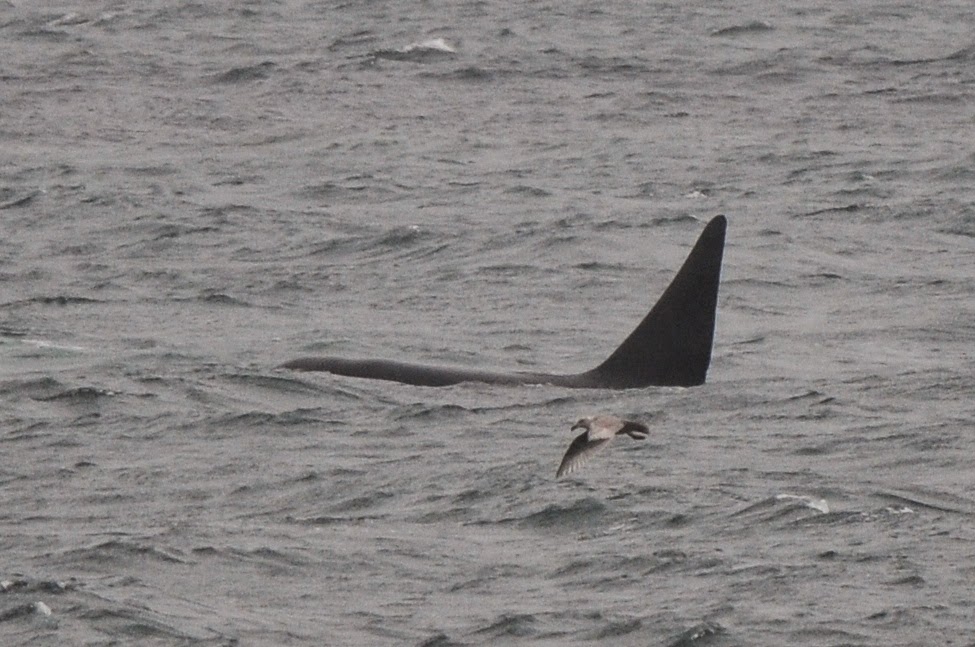 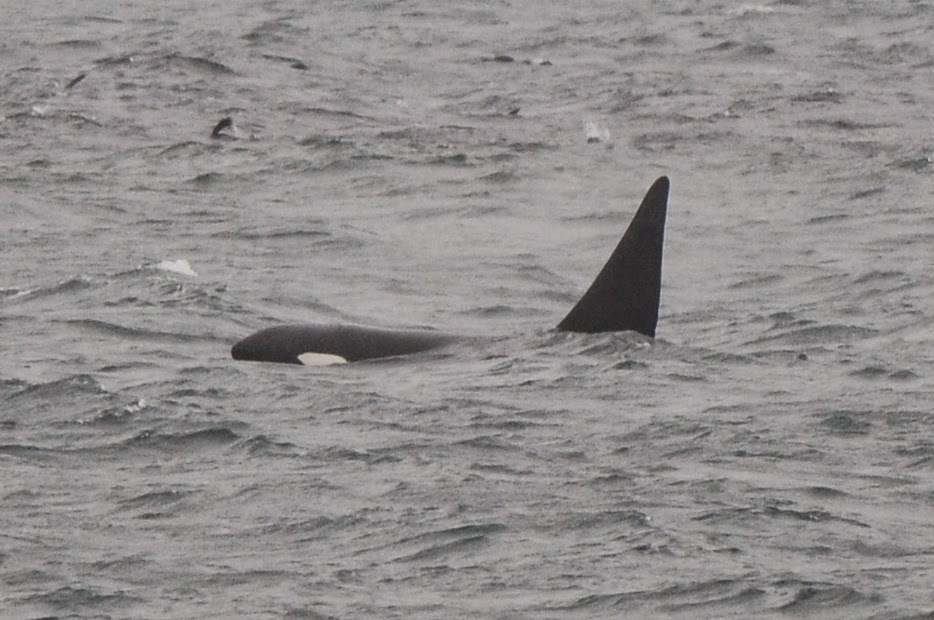 Here's the male and female as they left Zapadni Beach... for the time being: 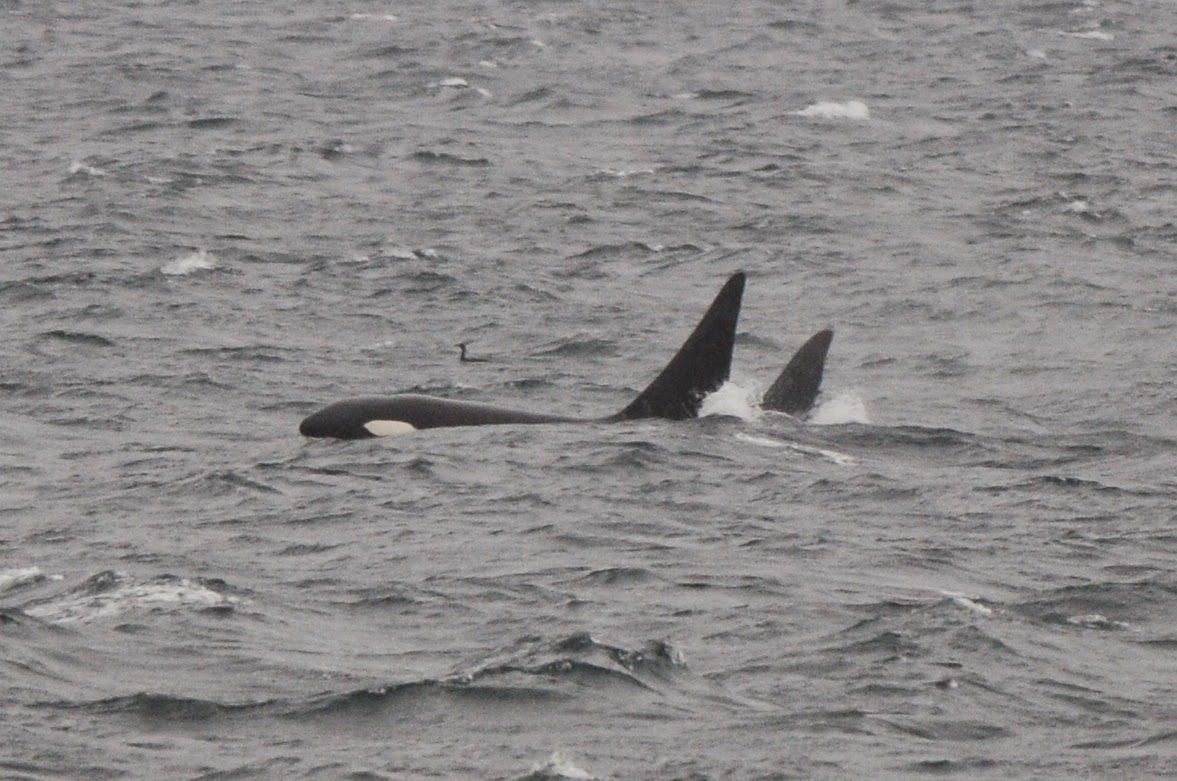 By the way, the tiny-looking bird in the water behind them is a not-so-small RED-FACED CORMORANT.