Ashley and I flushed a YELLOW RAIL from an upland prairie area at Hendrickson Marsh here in Story County. We were only able to flush it once, however.
Then later in the morning, we ended up with 8 warbler species at Emma McCarthy Lee Park in Ames. They were:
Golden-winged Warbler (2)
Nashville Warbler
American Redstart
Ovenbird
Black-and-white Warbler
Black-throated Green Warbler
Magnolia Warbler
Common Yellowthroat
Here is one of the 2 Golden-winged Warblers: 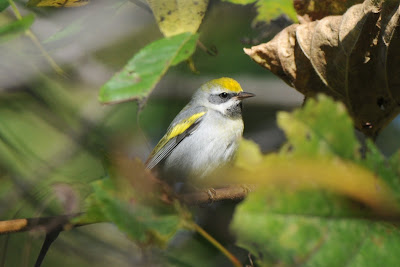 Also notable were 6 different PHILADELPHIA VIREOS. Here is one of them: 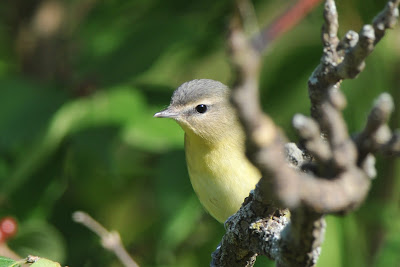 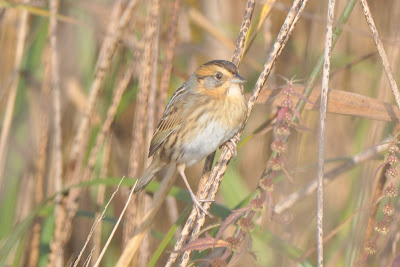 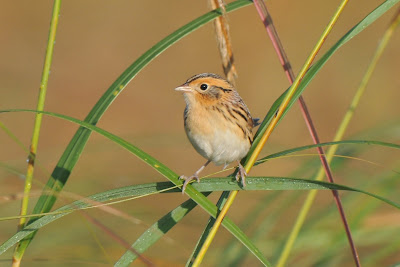 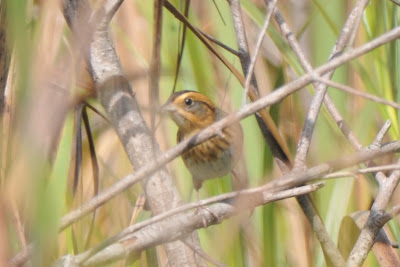 Also a MERLIN at Dunbar Slough.
Here is a Sedge Wren from this morning: 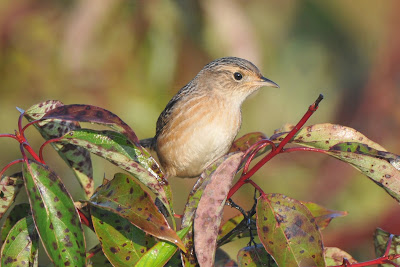 Lastly, for a laugh, check out this photo of a Sora in flight! 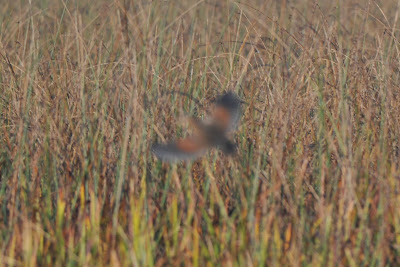 Ashley and I finally stirred up our first NELSON'S SPARROW of the fall this morning at Errington Marsh: 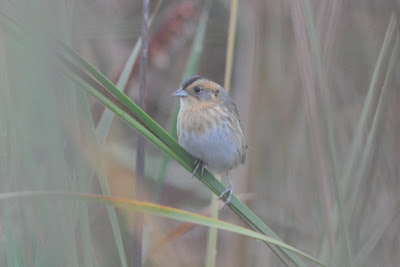 However, even more uncommon at this time of year was this HENSLOW'S SPARROW: 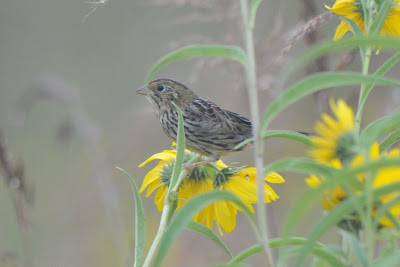 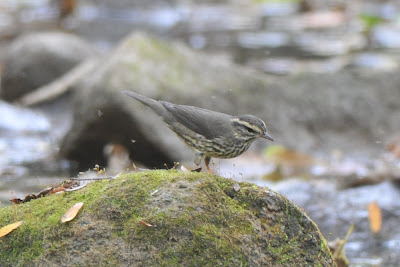 Here is a Philadelphia Vireo: 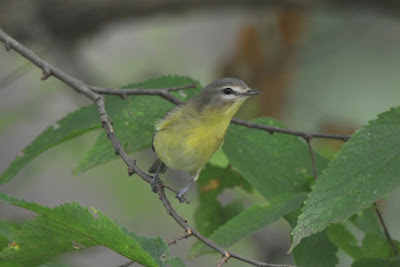 Here's a poor photo of a "getting late" Blue-gray Gnatcatcher: 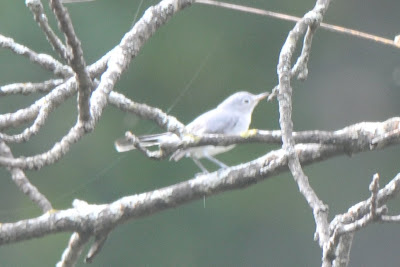 Lastly, here is a female Eastern Pondhawk (I think...): 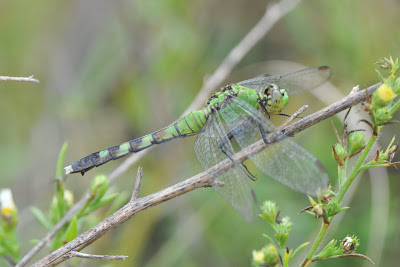 Really not much to report from this morning. We tried visiting some marshes but they were all busy due to it being the first day of duck season. Instead we explored some river access points in Story County. We had:
Chestnut-sided Warbler
American Redstart
Black-and-white Warbler
Black-throated Green Warbler (5)
Common Yellowthroat
Yellow-throated Vireo (1)
Blue-gray Gnatcatcher (1)
Here is a Red-eyed Vireo: 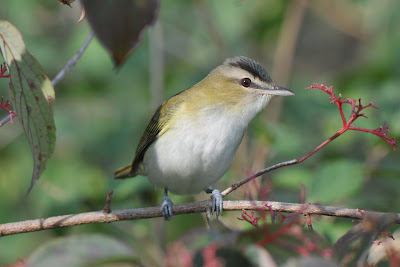 Ashley and I checked out Errington Marsh and Saylorville in Polk County this morning. We didn't turn up any LeConte's or Nelson's Sparrows yet but we did have great looks at a couple neat things.

First we had a ton of SEDGE WRENS: 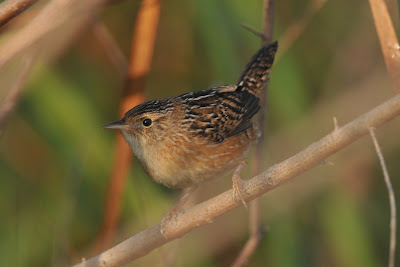 There were plenty of MARSH WRENS as well: 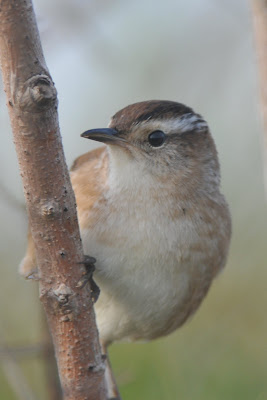 We saw several sparrows as well which gave us a chance to practice up (these LCSP or GRSP?): 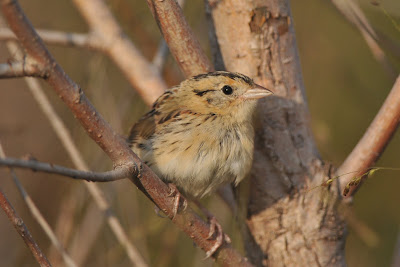 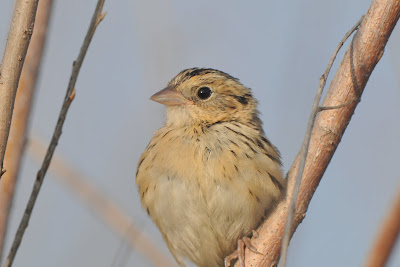 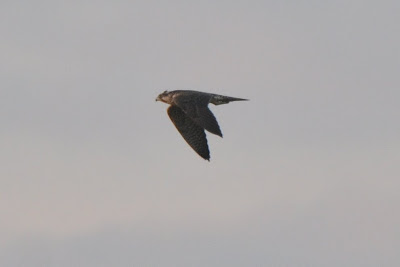 We also flushed a SORA from a marsh edge. No Yellow Rails yet. :-)

Ashley and I made a quick lap around Ledges State Park this morning. Most surprising were at least 2 YELLOW-THROATED WARBLERS still present. Here is a photo of one of them: 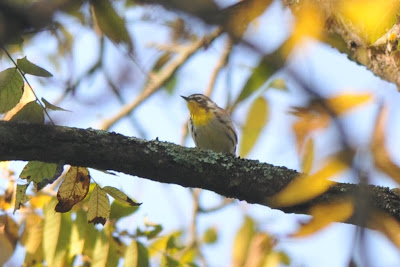 The below BLUE-HEADED VIREO is seemingly doing ok even without its top mandible! 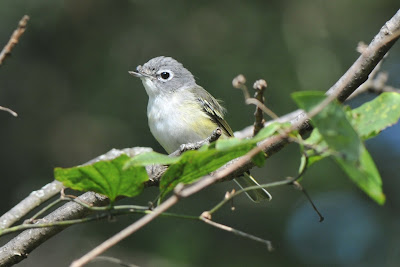 Ashley spotted this roosting COMMON NIGHTHAWK in the trees above us: 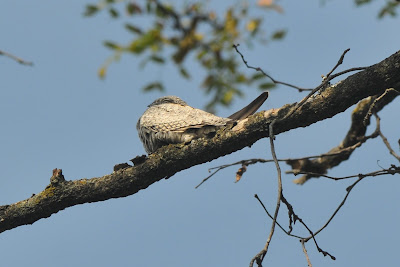 Some other birds at Ledges SP included:
Northern Parula (1, and it even sang once!)
American Redstart (2)
Chestnut-sided Warbler (1)
Wilson's Warbler
Black-and-White Warbler (1)
Swainson's Thrush (2)
Blue-headed, Warbling, and Red-eyed Vireos
Eastern Wood-Pewee (2)
We stopped briefly at Harrier Marsh but didn't stir up any Nelson's Sparrows yet. Instead, I had great looks at this WHITE-FACED MEADOWHAWK:
Some birds at Harrier Marsh included:
Sedge Wren
Marsh Wren
Swamp Sparrow
Posted by Cory J. Gregory at 9/13/2009 01:16:00 PM

A good mid-September bird for Iowa, a PINE SISKIN showed up at my feeders here in west Ames. Here are 3 photos: 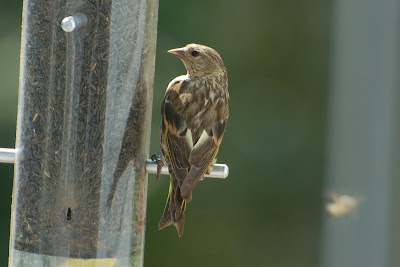 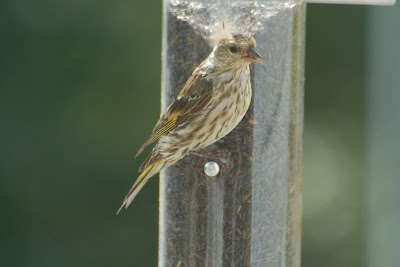 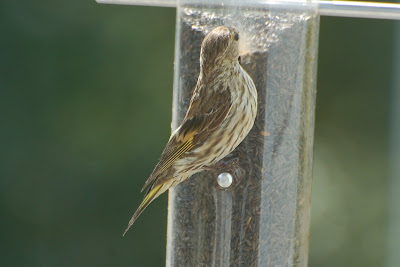 Hi guys,
A picture I took of one of our satellite-marked curlews made it to the Western Hemisphere Shorebird Reserve Network website:
http://www.whsrn.org/news/article/satellite-tracking-migrations-whimbrels-and-long-billed-curlews
Posted by Cory J. Gregory at 9/05/2009 09:47:00 PM

Although I haven't had much chance to actually get out and bird lately, I did sneak away today. Nothing earth-shattering but I thought I'd share a few pics.
Here is a nice male GOLDEN-WINGED WARBLER from Polk County this morning: 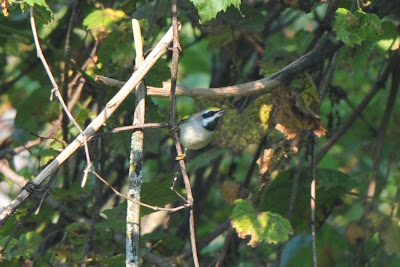 Speaking of Golden-winged Warblers, Ashley spotted one from the yard yesterday!
Here is a BAY-BREASTED WARBLER from this morning. Terrible pic, huh? But trust me, we saw it much better than this! 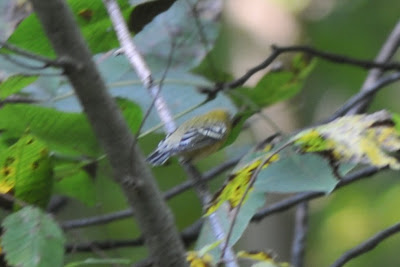 In summary, we had 10 species of warblers including:
Golden-winged Warbler
Tennessee Warbler
Nashville Warbler
Black-and-white Warbler
Blackburnian Warbler
Bay-breasted Warbler
Ovenbird
Mourning Warbler
Wilson's Warbler
American Redstart
We also had 9 species of shorebirds including:
Sanderling (1)
Baird's Sandpiper (4)
Some more random sightings included:
Capsian Tern (6)
Forster's Tern (4)
American White Pelicans (500+)
Olive-sided Flycatcher (1)
On an interesting note, I managed a pic of a new dragonfly for me, a SHADOW DARNER:
This was a beauty, a winter-form QUESTION MARK: 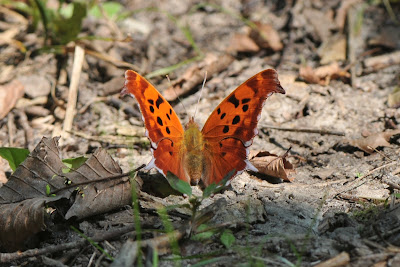