There's been this idea inside my head lately (on the back burner and getting stinky).  You'll remember back to January 1 of this year (or maybe you won't) when I set out to find 100 species in a day here in Sacramento County.  Well, I rushed around and ultimately came up a few short.  Not a big deal... BUT I was close enough to get the gears turning.

I arrived around 7:30 this morning and started by scoping shorebirds and ducks along Desmond Road and the Lost Slough areas.  A SEMIPALMATED PLOVER was one of the first to greet me: 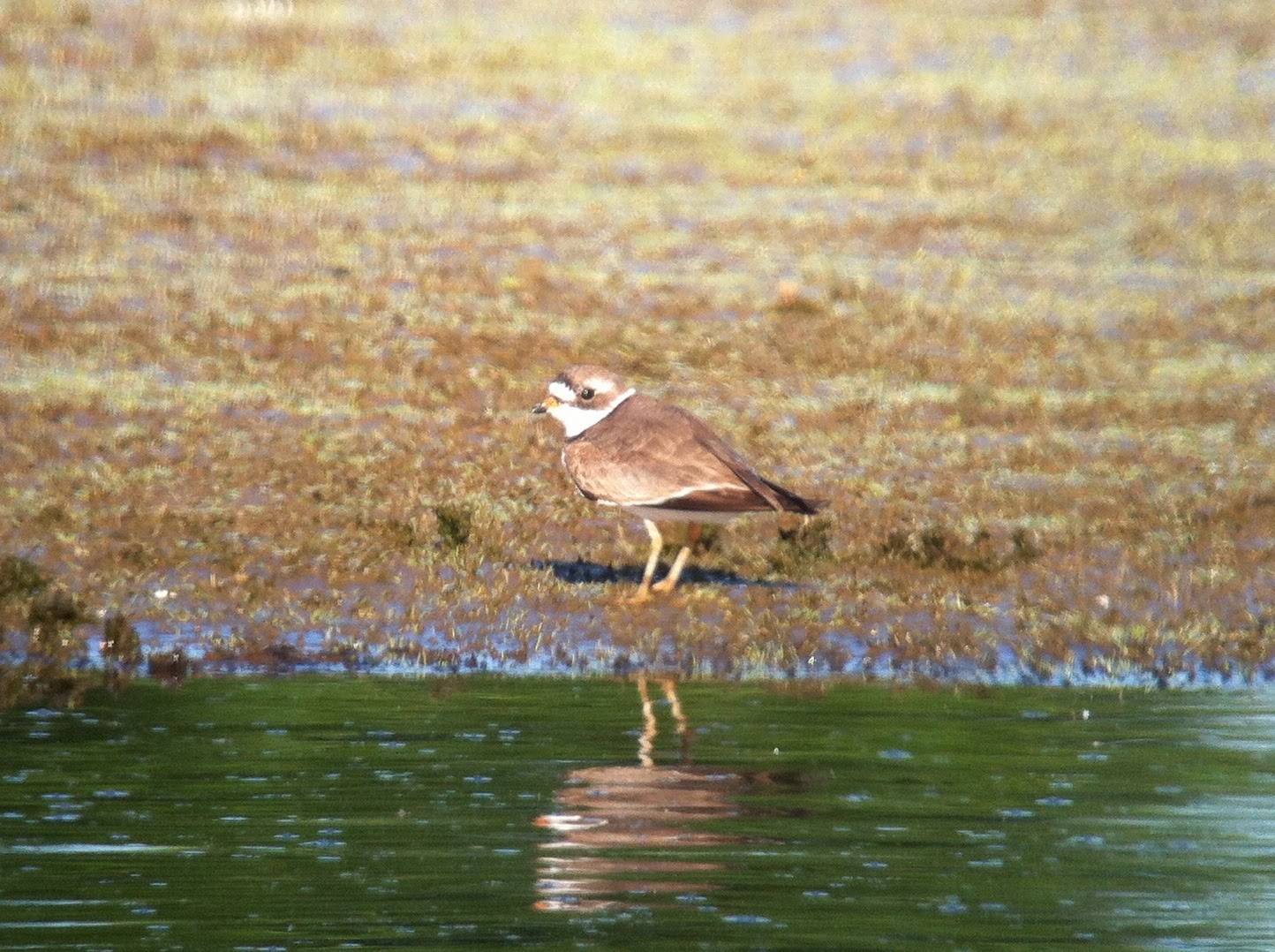 It was quite evident that the floodgates had opened for WESTERN SANDPIPERS.  There were fewer than 5 a couple of days ago but now the numbers were 40+.  Note the black legs, bright rufous on head/cheek/scaps, and the longish/drooped bill: 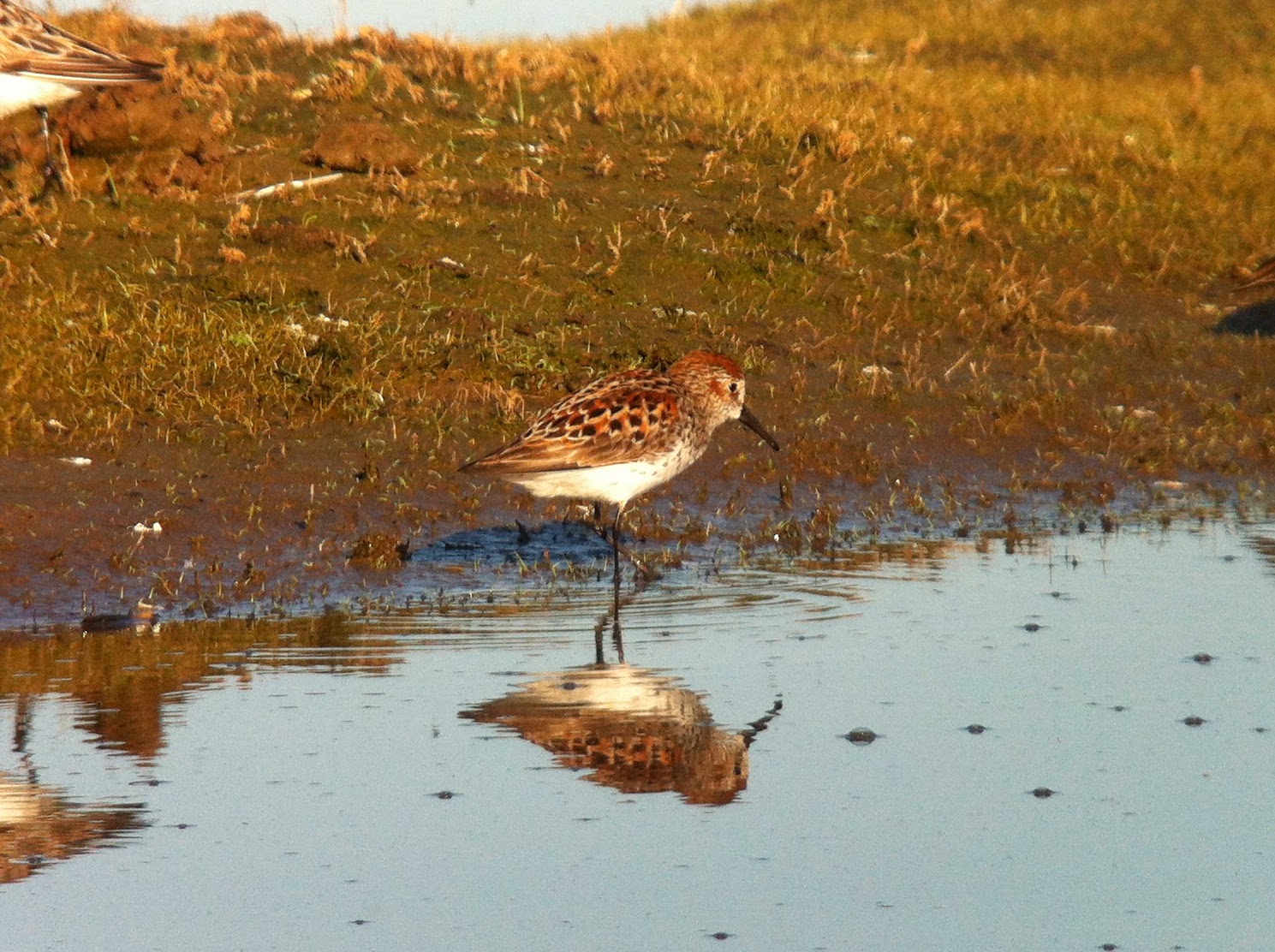 One of the flooded units was being drawn down which made it an attractive destination for this SOLITARY SANDPIPER.  This was my best find of the day and was a county lifer for me: 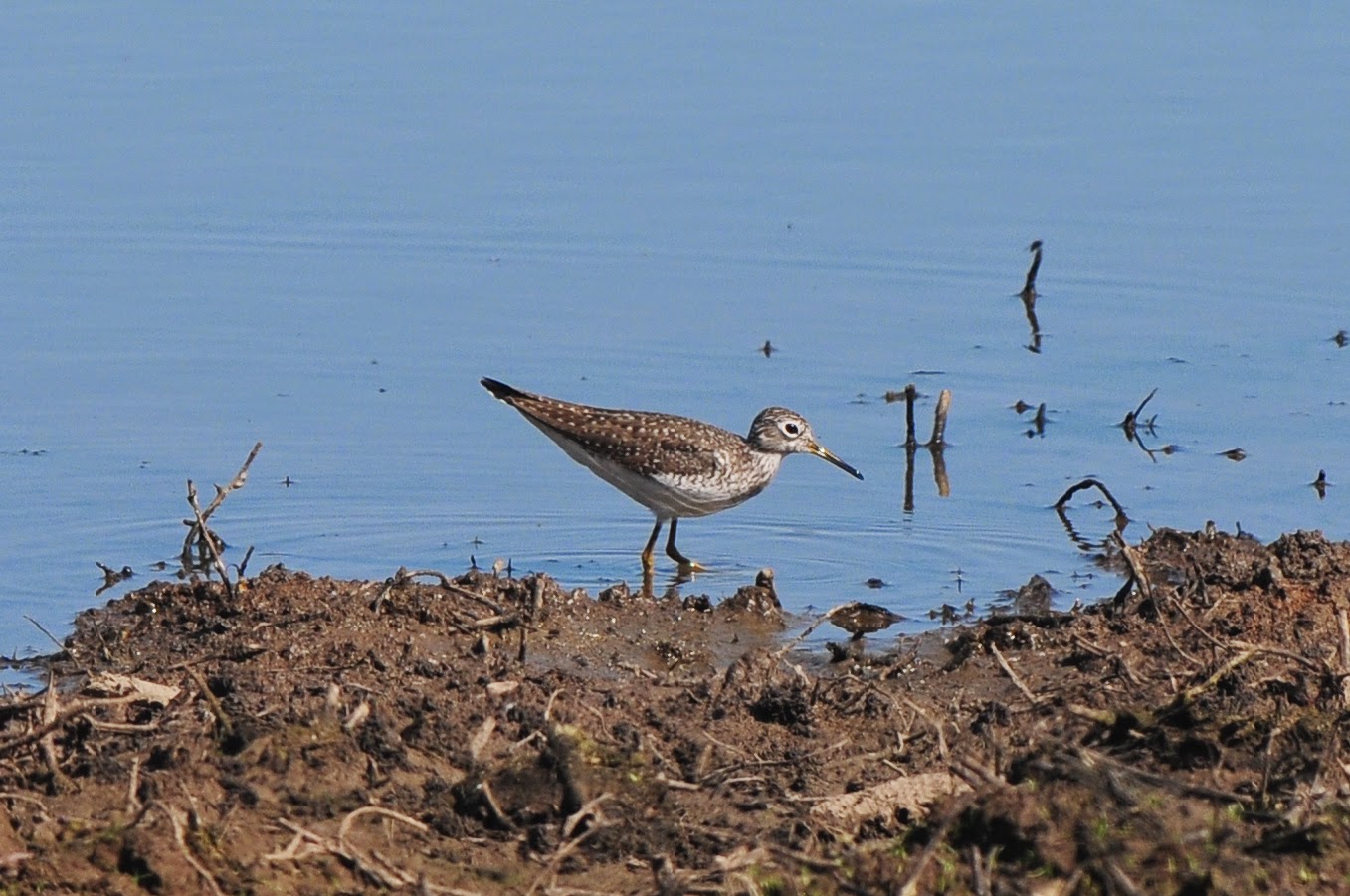 Yep, and if the not-so-black back and the elongated look to the backend wasn't enough, I know it wasn't a Green Sandpiper by this shot of the rump: 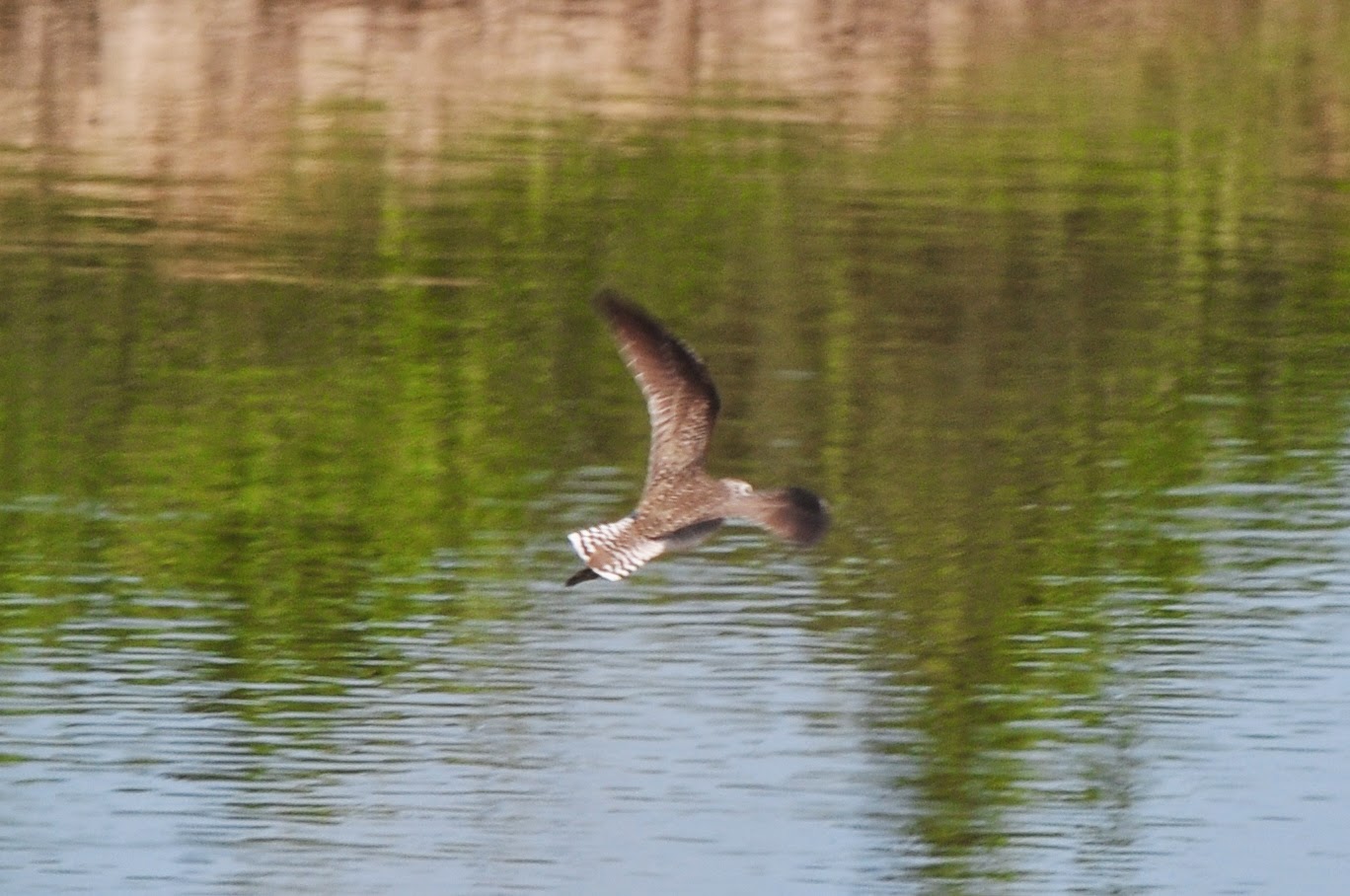 All these ponds probably have actual names but I'll skip that step and put a pin exactly where the bird was:

I continued on my trek and found several VIOLET-GREEN SWALLOWS bickering with TREE SWALLOWS for a potential nest site.  Well, I can't say for sure that these swallows will nest here but when a cavity-nester behaves like this, it's hard to assume otherwise: 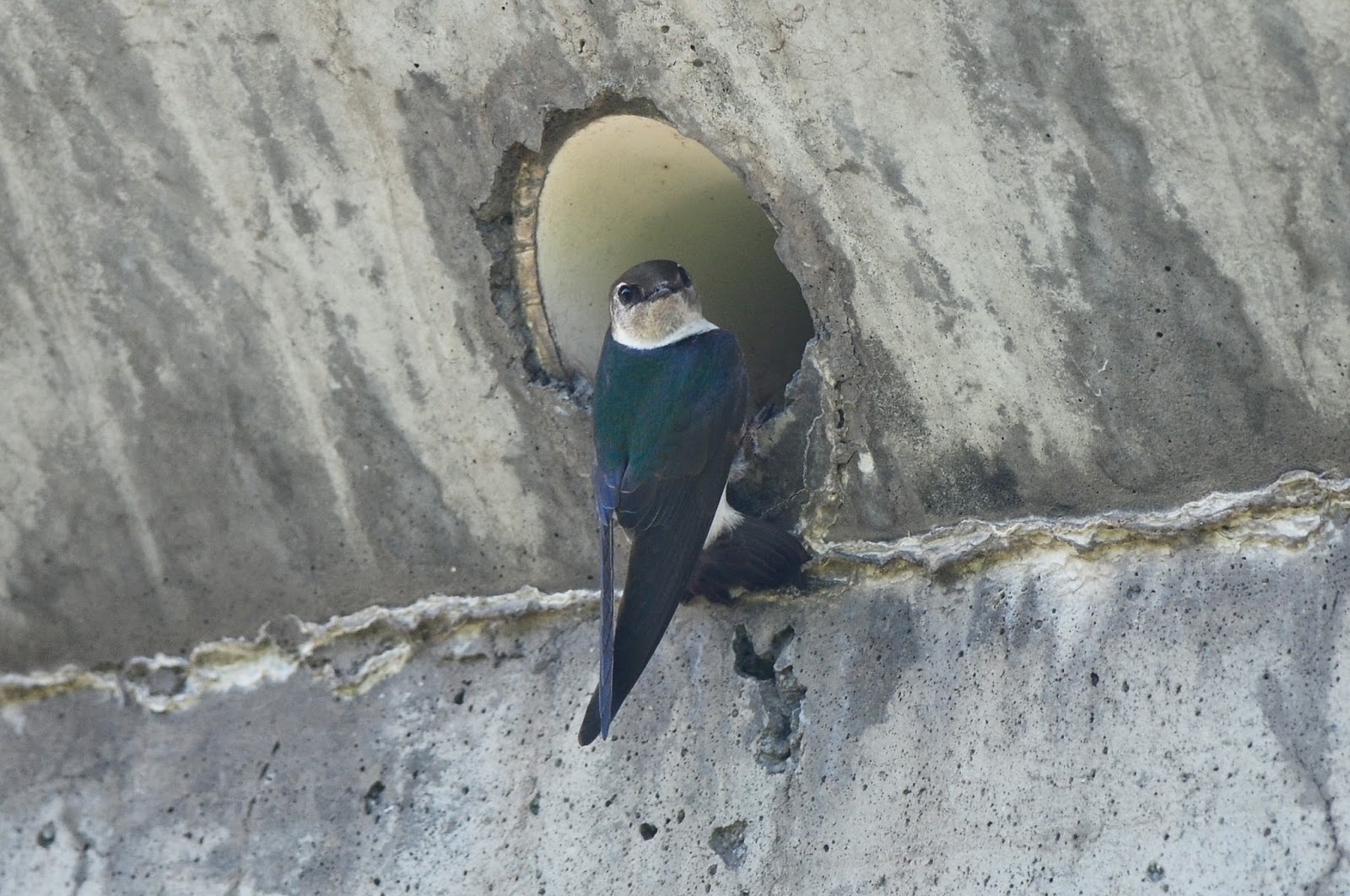 It's a shame these two photos aren't a bit more in focus; I absolutely love the coloration on these guys: 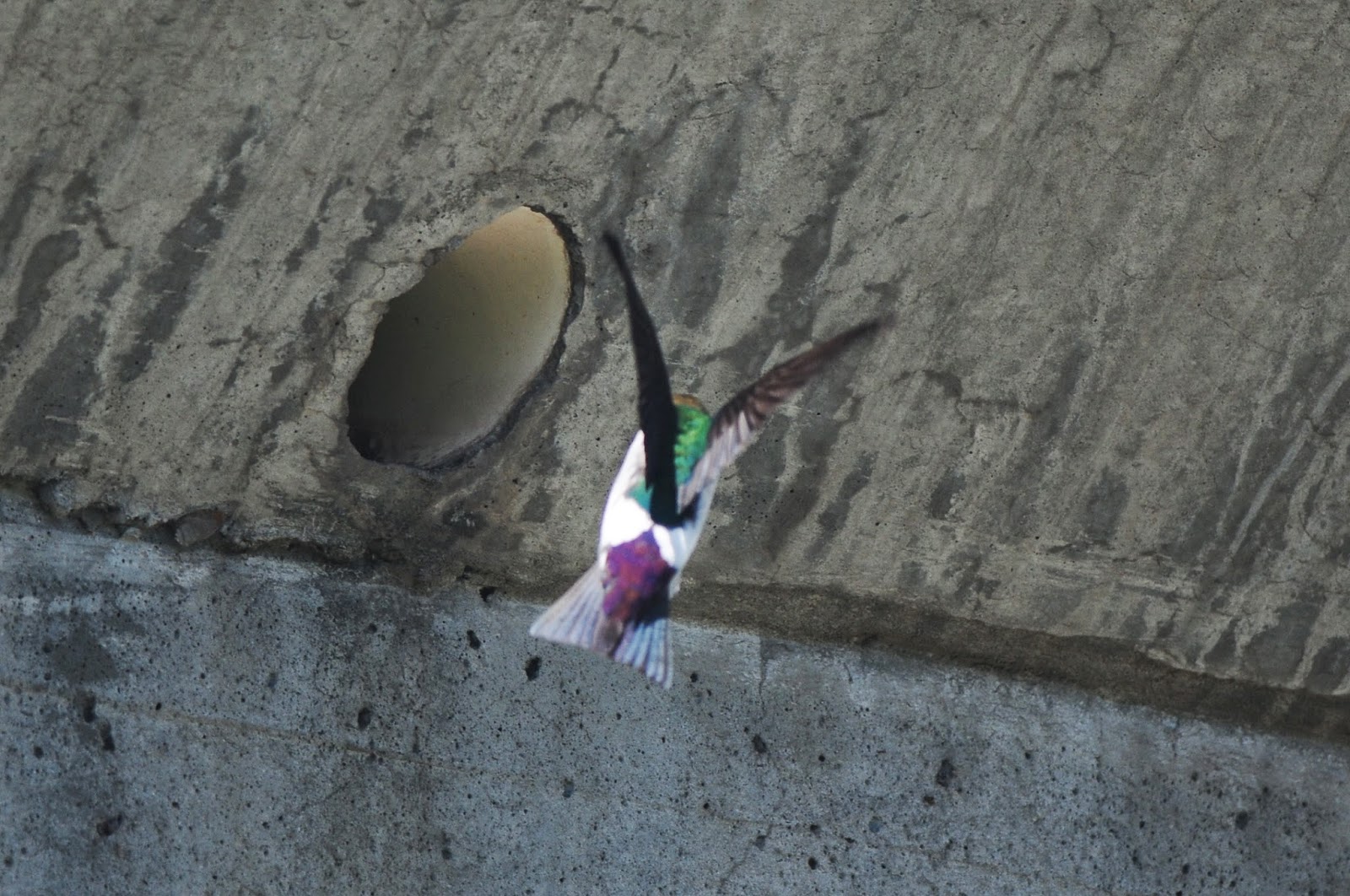 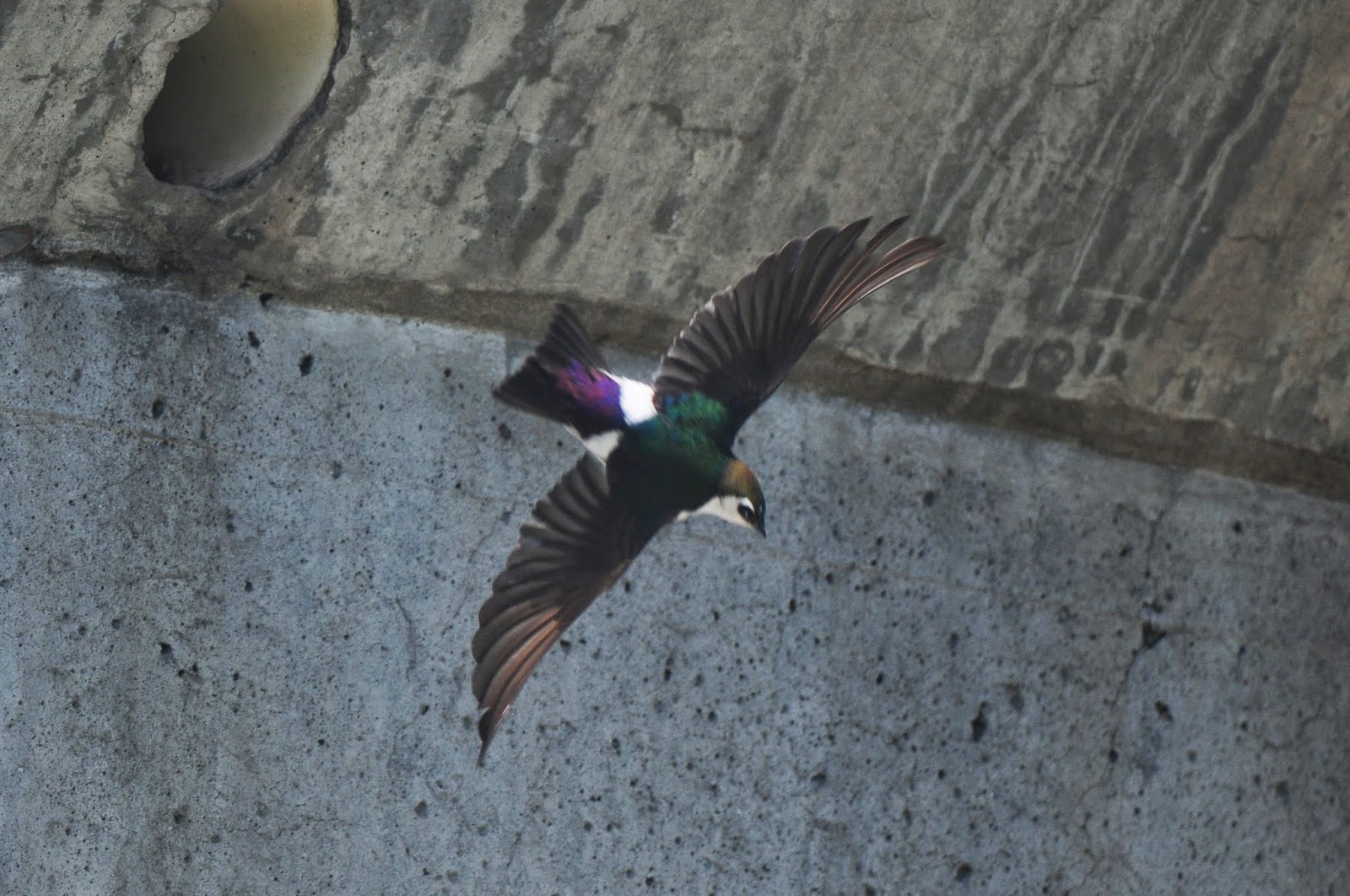 But of course the TREE SWALLOWS weren't to be outdone.  If I were keeping track, this might be my best shot ever of a TRES head: 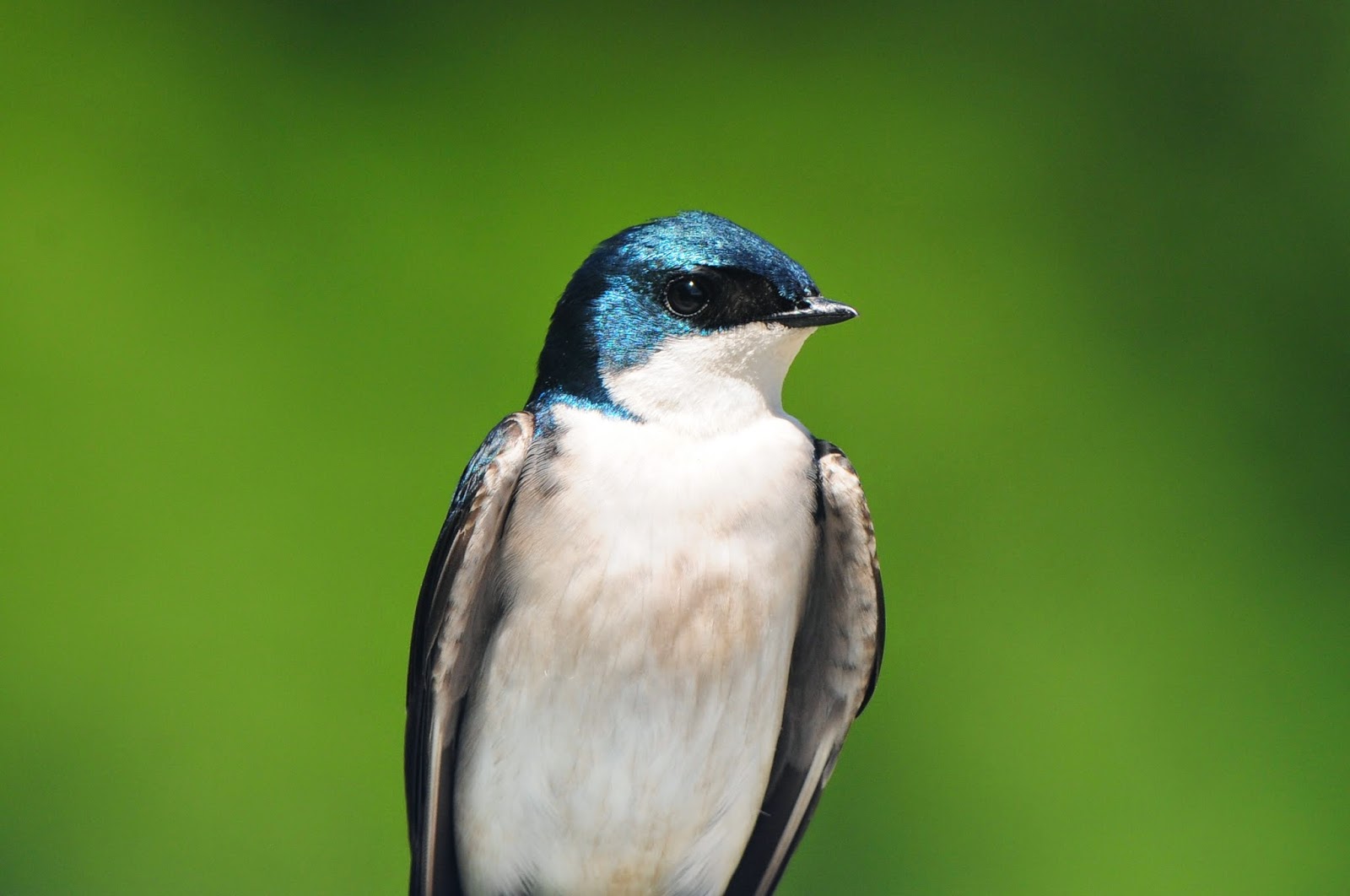 The afternoon sun (temps were in the 80s), brought out many butterflies.  This LORQUIN'S ADMIRAL was staring me down: 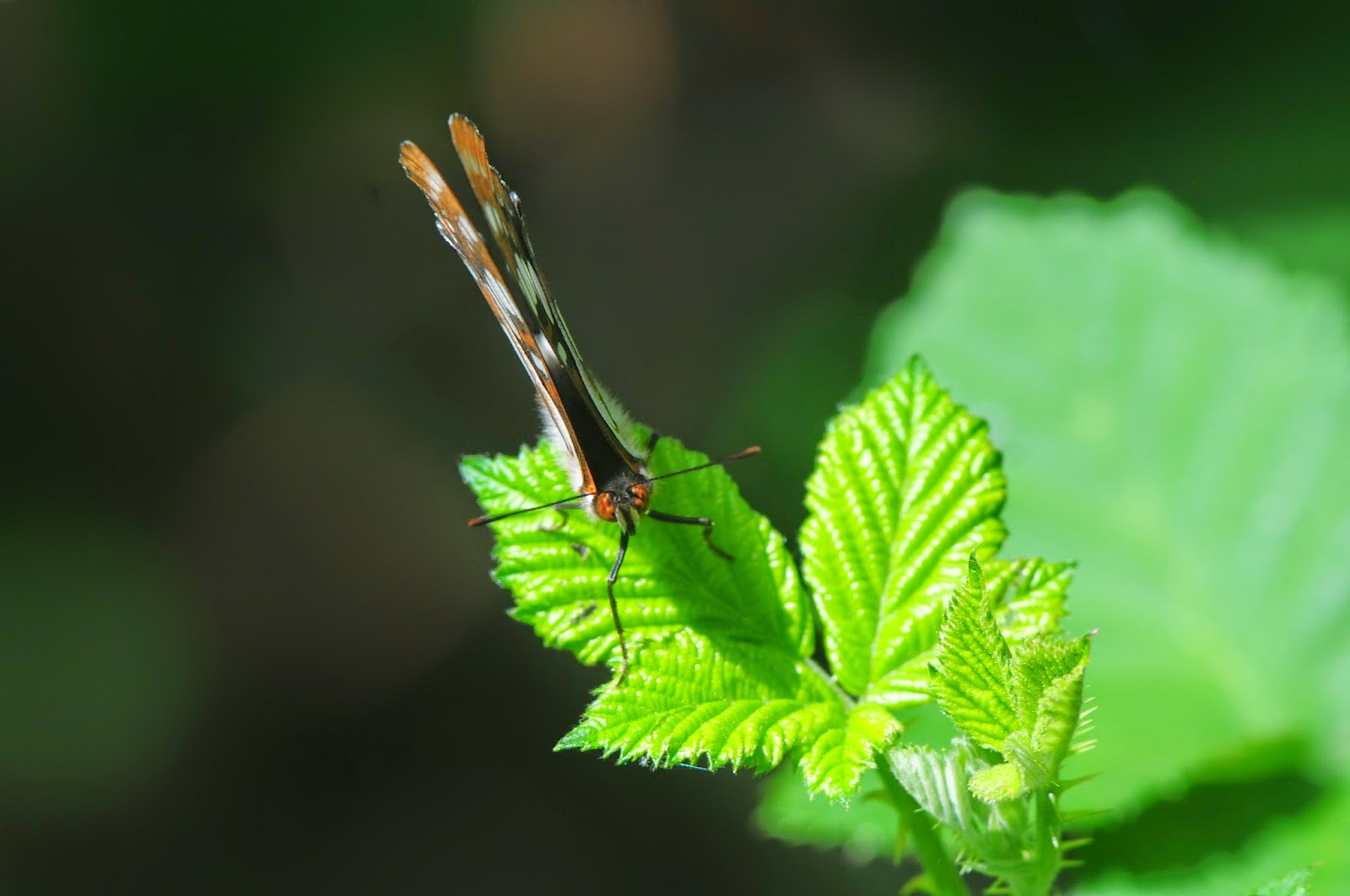 ...and today yielded my first MYLITTA CRESCENTS of the year: 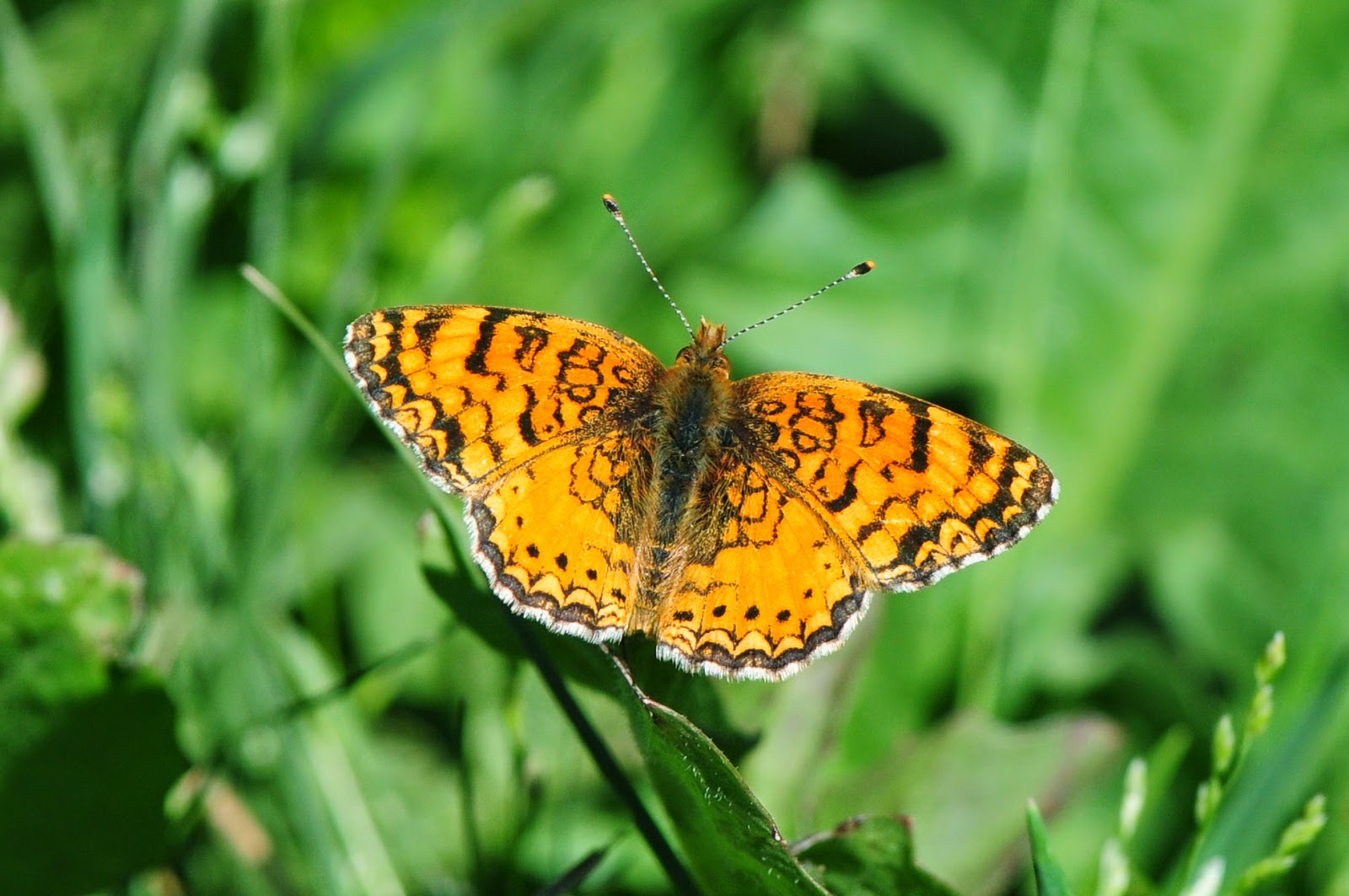 Nearing the end of my effort, I was in dire need of fluke additions to my checklist.  One of those occurred when I flushed an AMERICAN BITTERN along a stretch of boardwalk.  Although this species breeds at Cosumnes, it's not one you can expect to find when you actually want to.

Another fluke was this WHITE-THROATED SPARROW that is continuing to hang out by the Visitor Center.  And as you can see, I was dehydrated and hallucinating enough to not bother taking a half-decent photo: 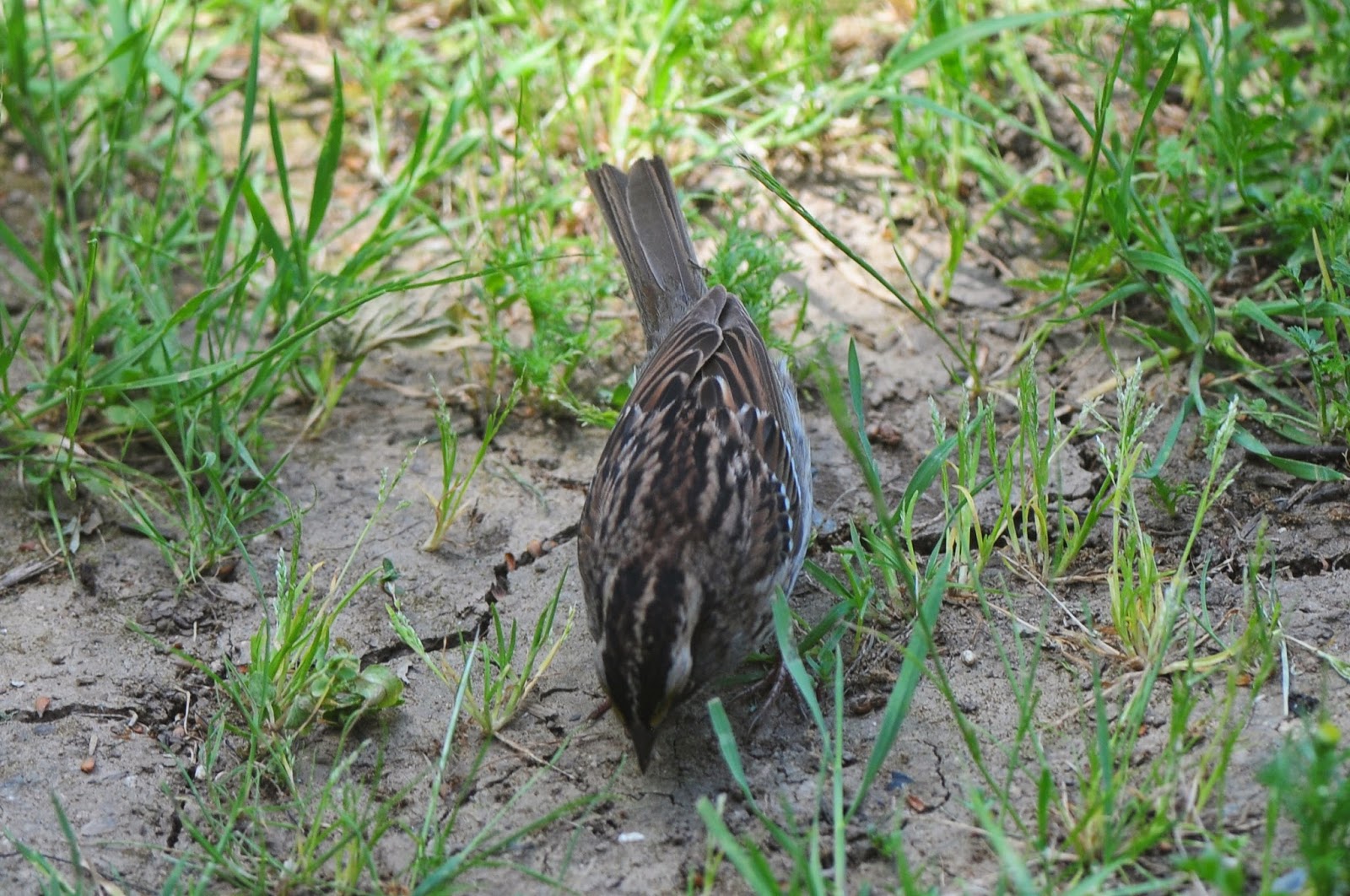 I found myself at 97 species with a surprising list of misses:

It's uncanny how easy it is to see these species there when you don't give a crap.  However, it was nearing 2:00 PM and I needed to get out of Dodge.  I needed some birds... and pronto.  I returned to Desmond Road which seemed like a logical place to refocus on shorebirds.  Although DUNLIN was easy just a week ago, the numbers have really thinned out lately.  I trained my scope on a roosting flock of WESTERN and LEAST SANDPIPERS and, eventually, my scoping paid off when a couple of the roosting birds turned out to be DUNLIN.  Ok, two more, I needed two more bits of luck.  Fast forward a while.  Cruising slowly down the road, my mind started to wander.  "Is that a pure purple Golden Eagle?  With a jetpack?  Wait, is it diving... towards me?  Woah, this thing is going to hit my freaking car!  HOLY..." -snapping to reality-  I slammed on the breaks.  I had heard something.  I hopped out, looked up, and confirmed my suspicions; a WHIMBREL was flying over and giving its hollow series of notes.

I was on a roll, I just needed one more.  That'd be easy, right?  Or.... would I bake here in the sun all afternoon, slowly losing my mind?  Would the authorities find a sunburnt crispy in hiking boots wrapped around a tripod with the number 99 scratched in the dirt?

I'm not sure at what point I became desperate but it was probably about the time I started setting my scope up ON TOP OF my car.  Maybe this added height would pay off?  Way out in a flooded field, I spotted a distant white bird on the other side of a dirt berm.  After adjusting my car location 3 times, I could confirm what would be my 100th species of the day, a FORSTER'S TERN.  It wasn't on my radar but I'd take it either way!  I reveled in reaching the mark for about 0.003 seconds before I packed up and scrammed.

Anyway, it was fun having a target number and even though it ended up being a slog at the end, I'm happy I stuck with it.  A friend suggested what I did could be classified as a "Big Checklist".  In the age of Big Years, Big Days, why not limit yourself to one hotspot and see how high you can get your single-visit total to.  Have any of you tried this?  If so, I'd like to hear about it!

Oh, and before I forget, as soon as I got home, Ash and I returned to Cosumnes just to see if the SOSA was still present (and it was).  Here's a digiscoped photo taken with my phone and adaptor: 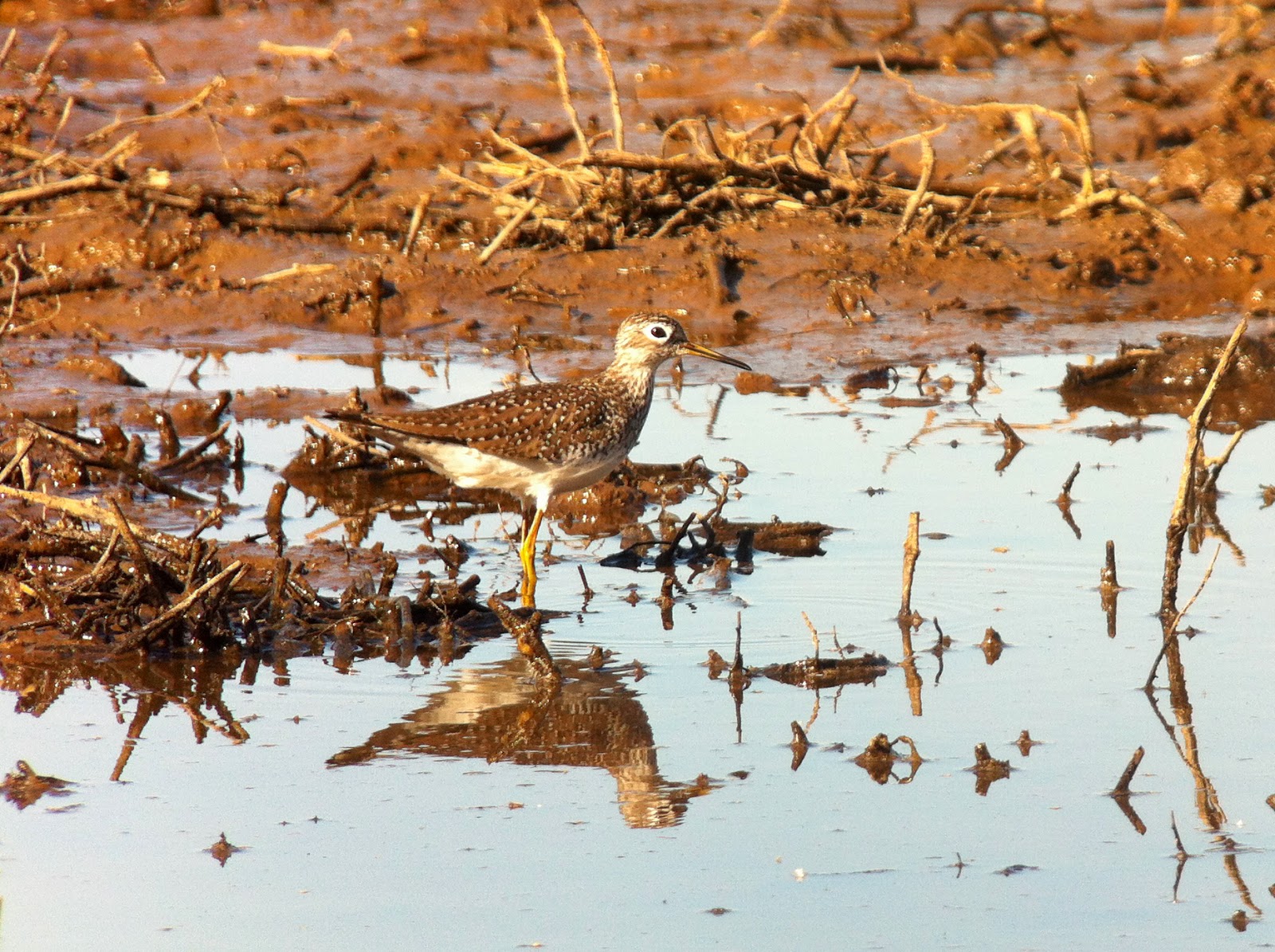 For those curious types, here's my final species list: