It was only a matter of time before I started venturing farther and farther from home to get my fill of birding.  Recently, I've spent a day here and there, mostly in the foothills on either side of the Central Valley.

For example, I returned to Michigan Bar and Latrobe roads (far eastern Sacramento County) in hopes of finding LAWRENCE'S GOLDFINCHES.  This species was one I had very little experience with before I moved to California and for good reason; they're by far the least common of the three normal goldfinches that breed here in North America.  I'm no expert on their biology but I do find them rather fascinating; they're found in open oak woodlands/grasslands in the foothills of California, especially grassy areas.

As luck would have it, I started having some success with them just in the last week or so.  They've been in the company of LESSER GOLDFINCHES just about every time and they're almost ALWAYS found in the vicinity of fiddleneck flowers (Amsinckia sp.).

Sexing this species is straightforward; males have a black face mask, females don't.  Here's a male from Latrobe Road: 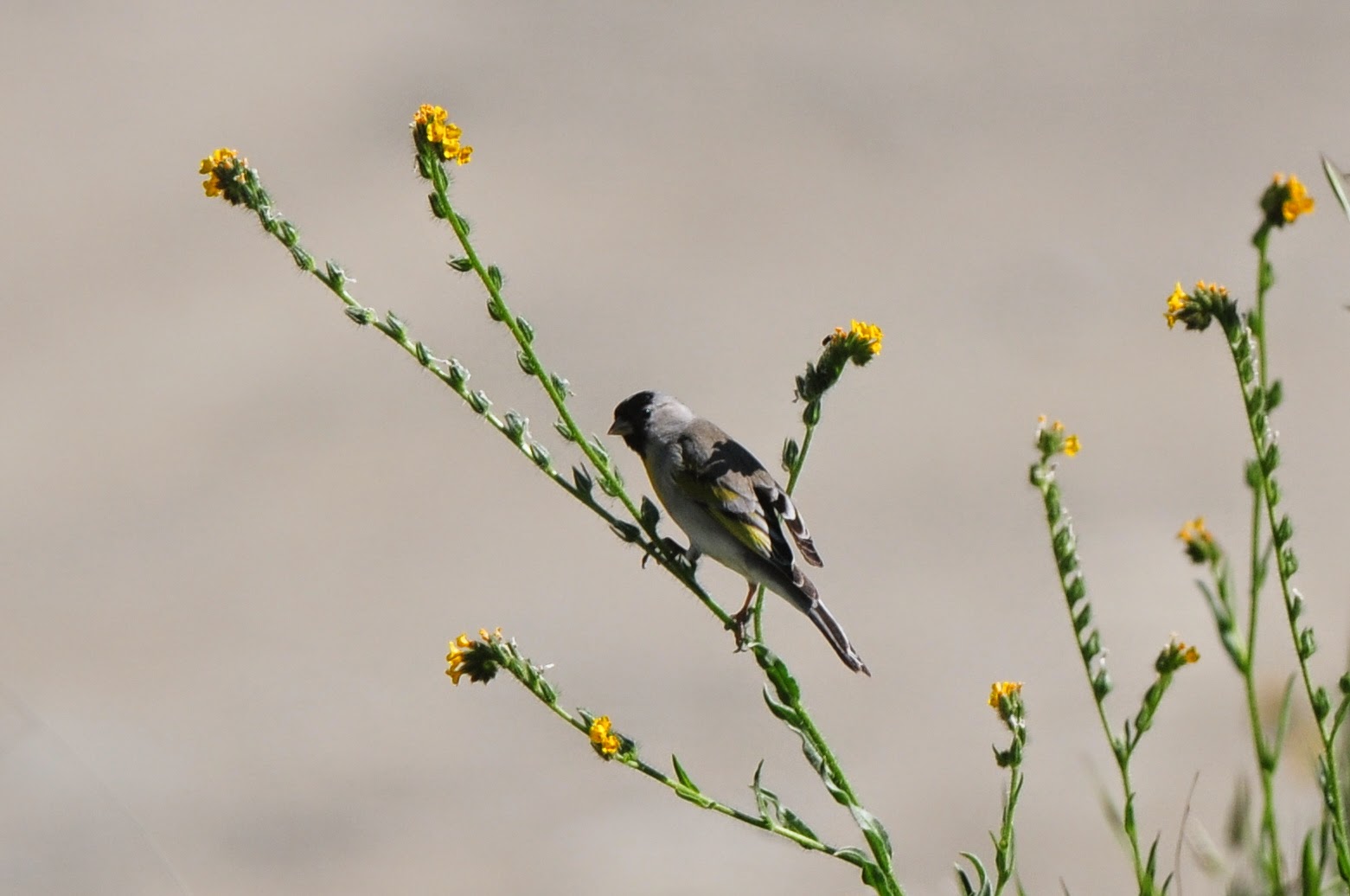 Here's a pair of LAWRENCE'S GOLDFINCHES, also on Latrobe Road.  The female, which is on the right, can still be identified as a LAWRENCE'S by the yellow edging on the wings: 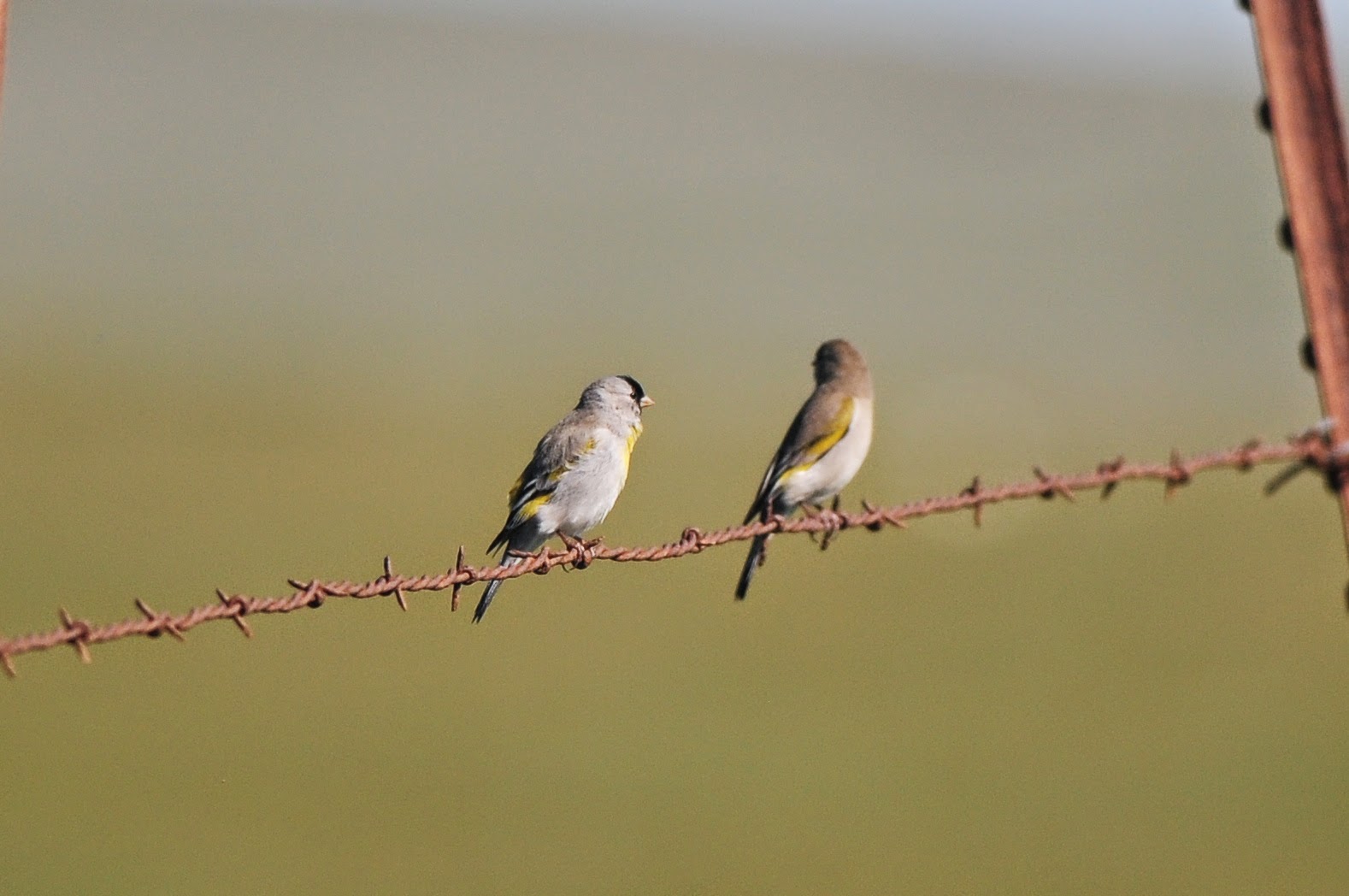 There has also been a reliable male LAWRENCE'S GOLDFINCH on Michigan Bar Road about 2.4-2.9 miles north of Highway 16.  As is typical of this species, it's been feeding on fiddleneck along with LESSER GOLDFINCHES: 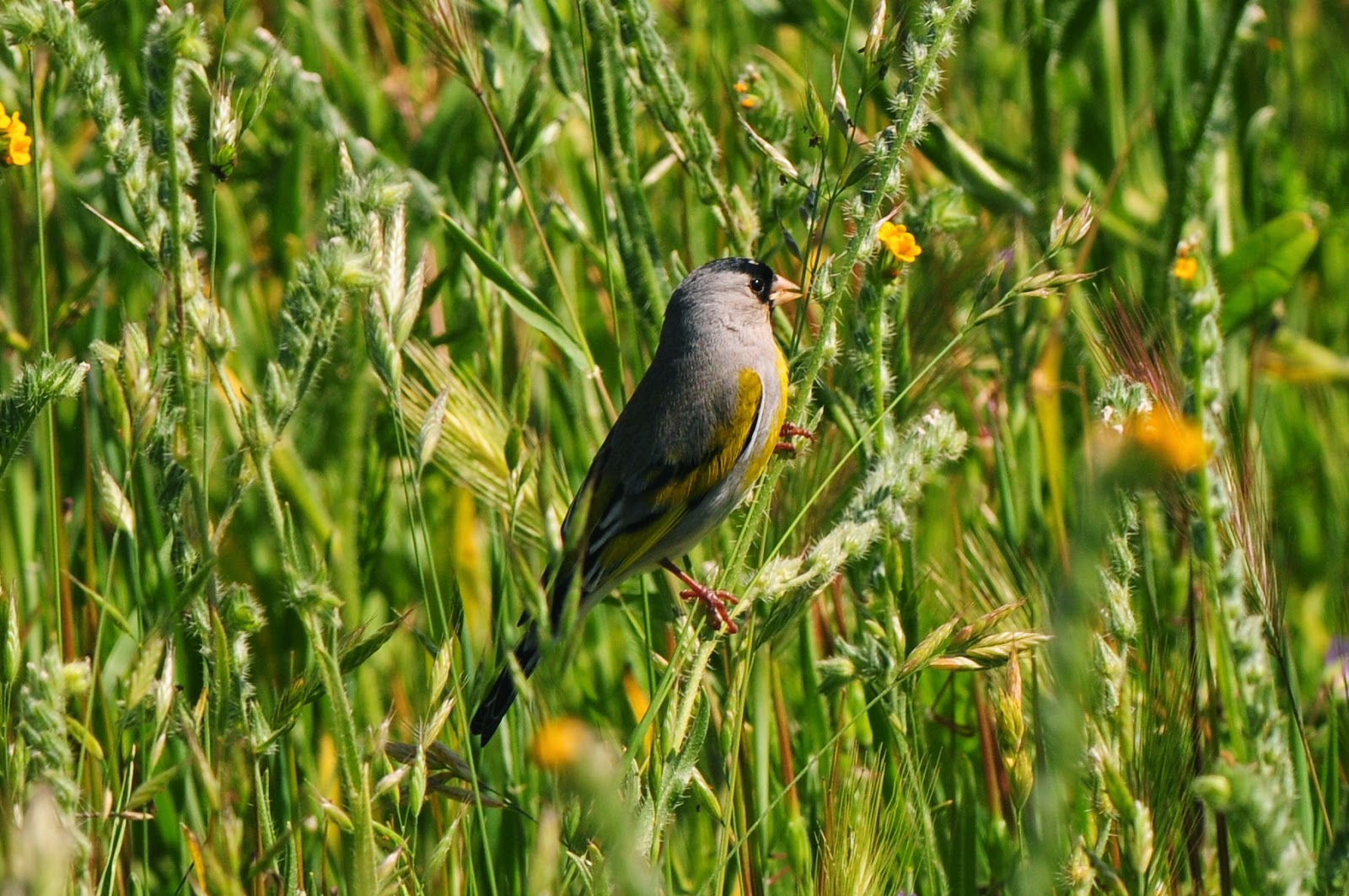 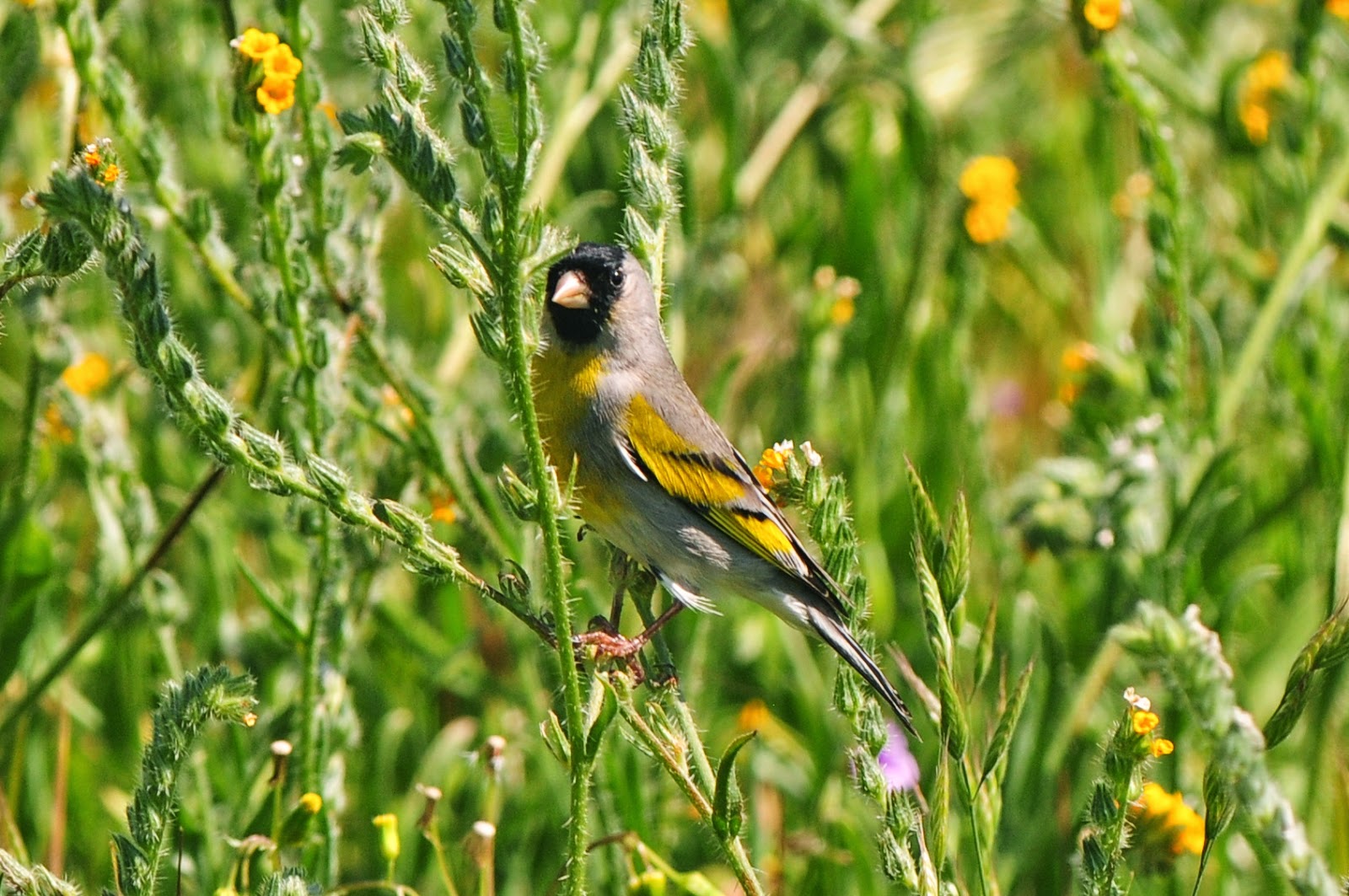 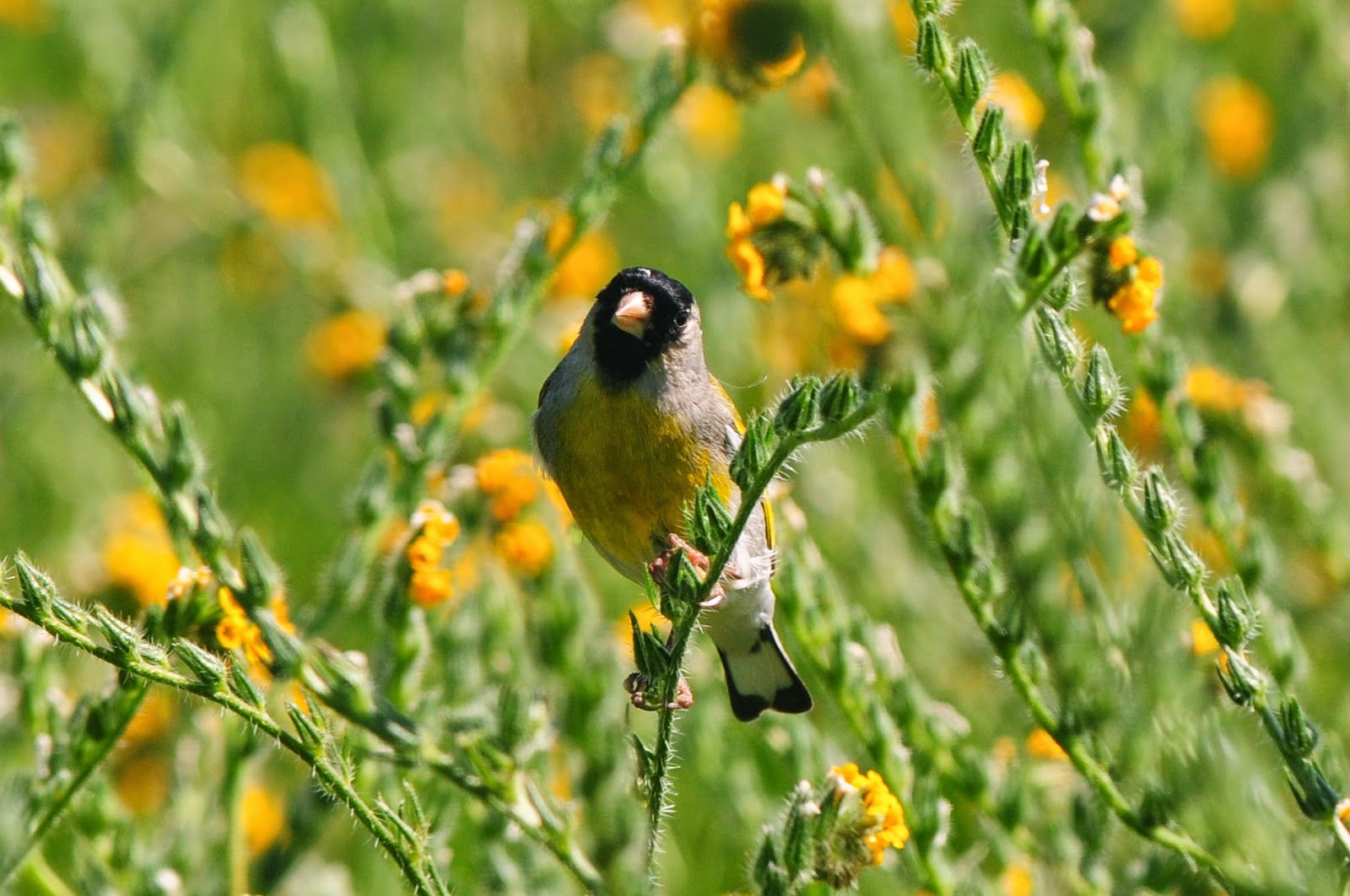 In this view, you can actually see the fiddleneck seed in its bill: 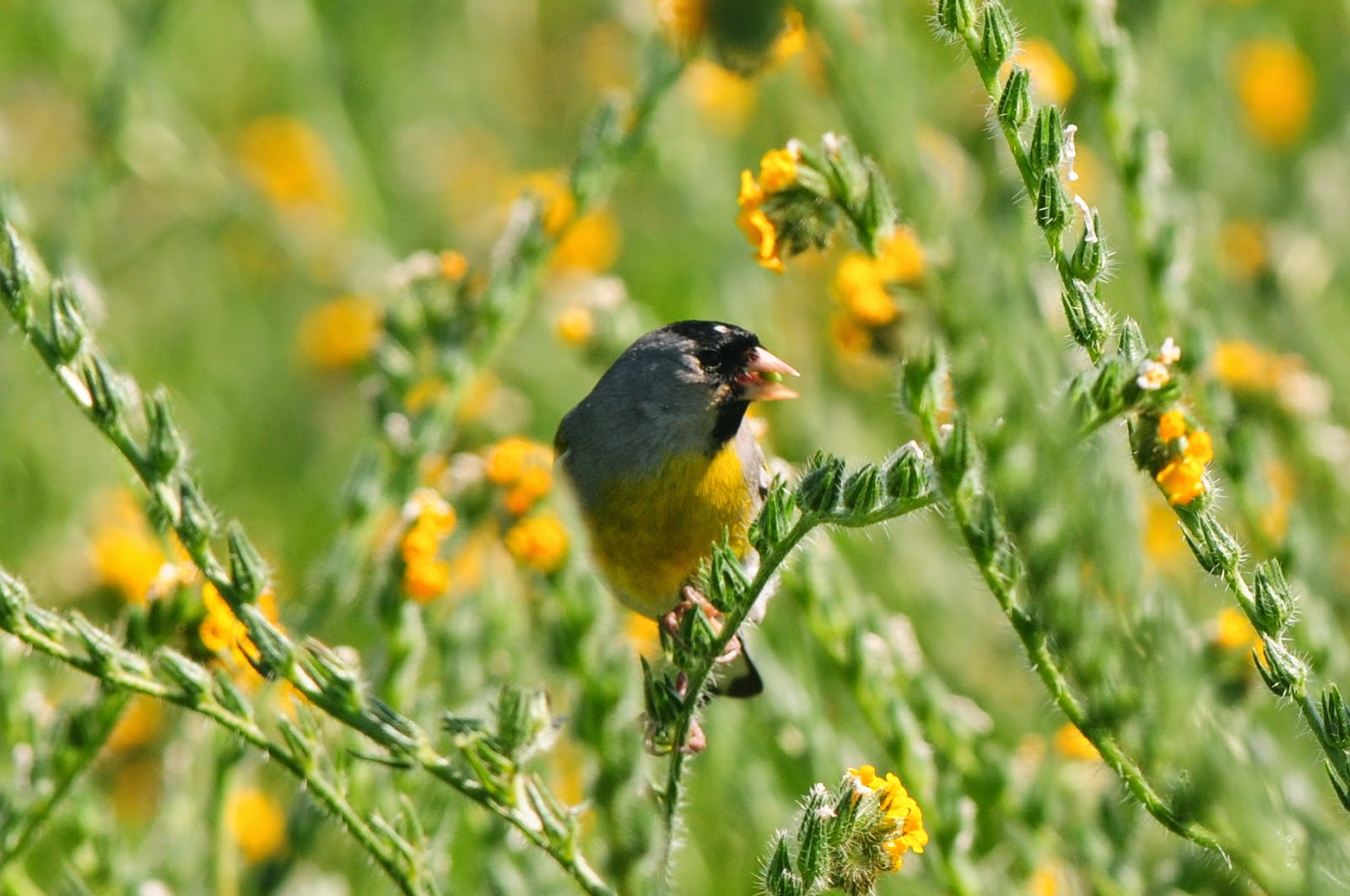 And hey, even OSPREYS can fly over when you're birding foothill locations.  For some reason, I've had a hard time finding a place around here that is super reliable for this species: 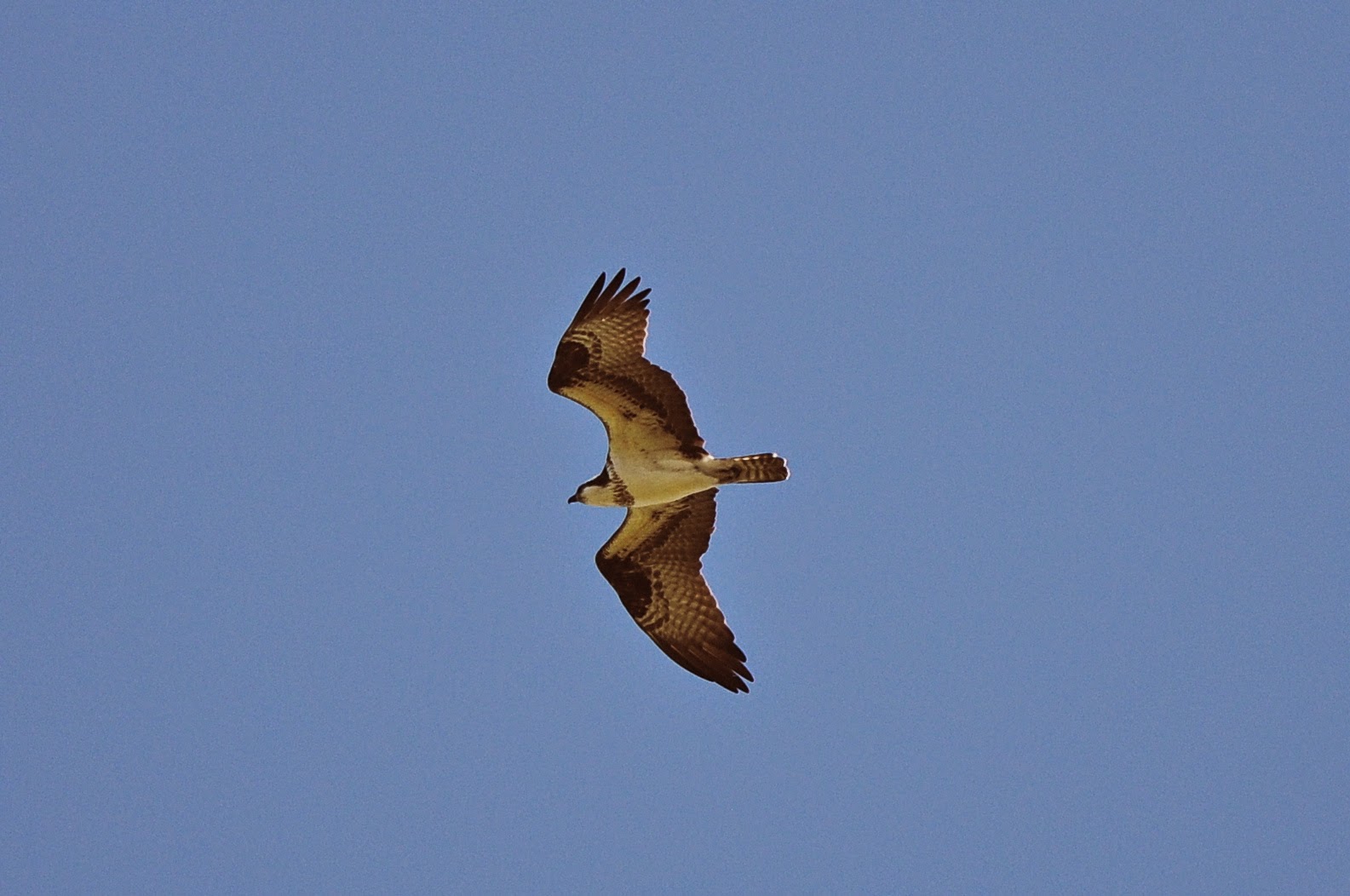 While I was out in the grassland areas of eastern Sacramento County, I also drove down Meiss Road.  This road is well known among the local birders for being a reliable spot for LESSER NIGHTHAWKS and GRASSHOPPER SPARROWS during the summer months.  I managed to find one of the latter despite it being a record early date for this location.  It actually flushed from a puddle in the road where it was bathing.  It preened on the fence for a few moments before flying off: 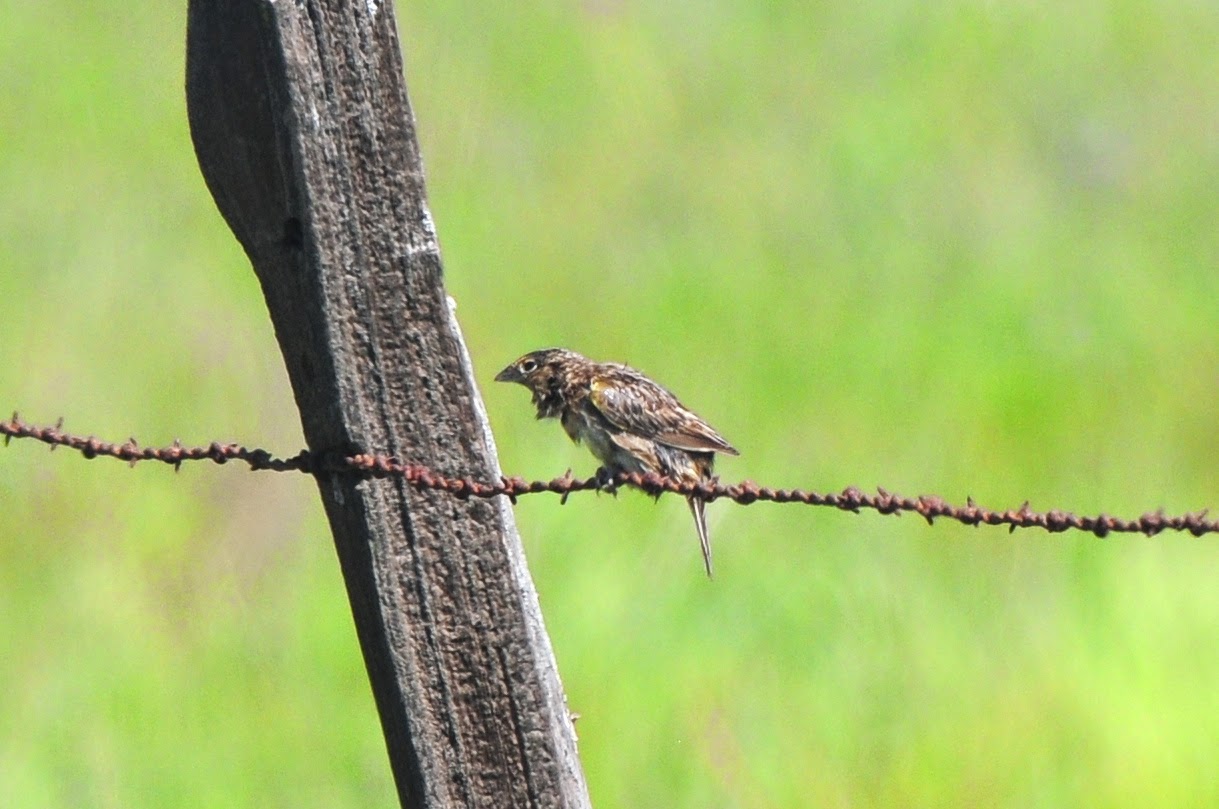 The endemic Central Valley race of HORNED LARK was also conspicuous and, at times, quite tame: 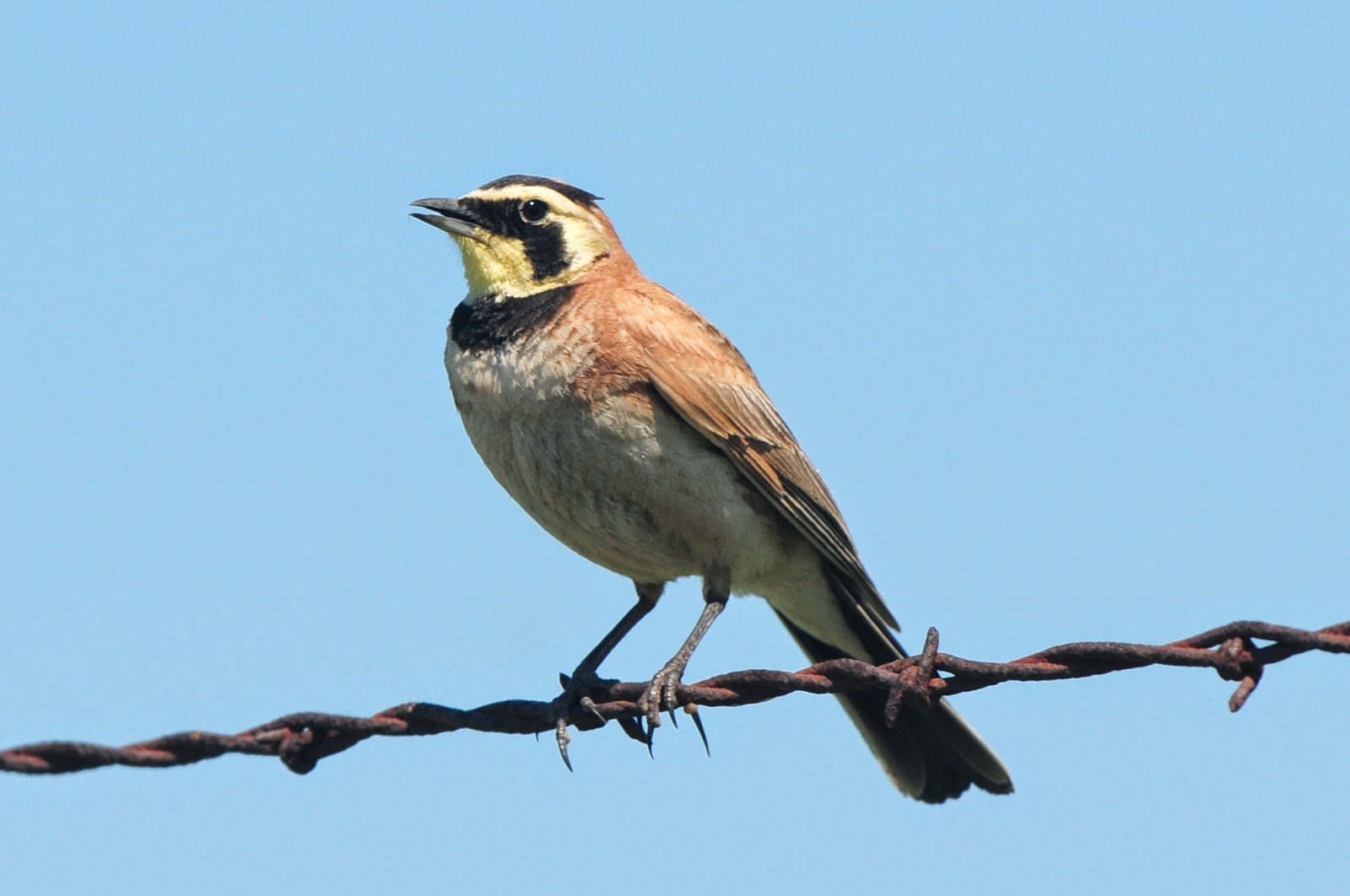 After my limited success, I decided to return the next day to see if both of us could relocate the targets.  On Latrobe Road we stumbled onto this singing but backlit sparrow on a fence post: 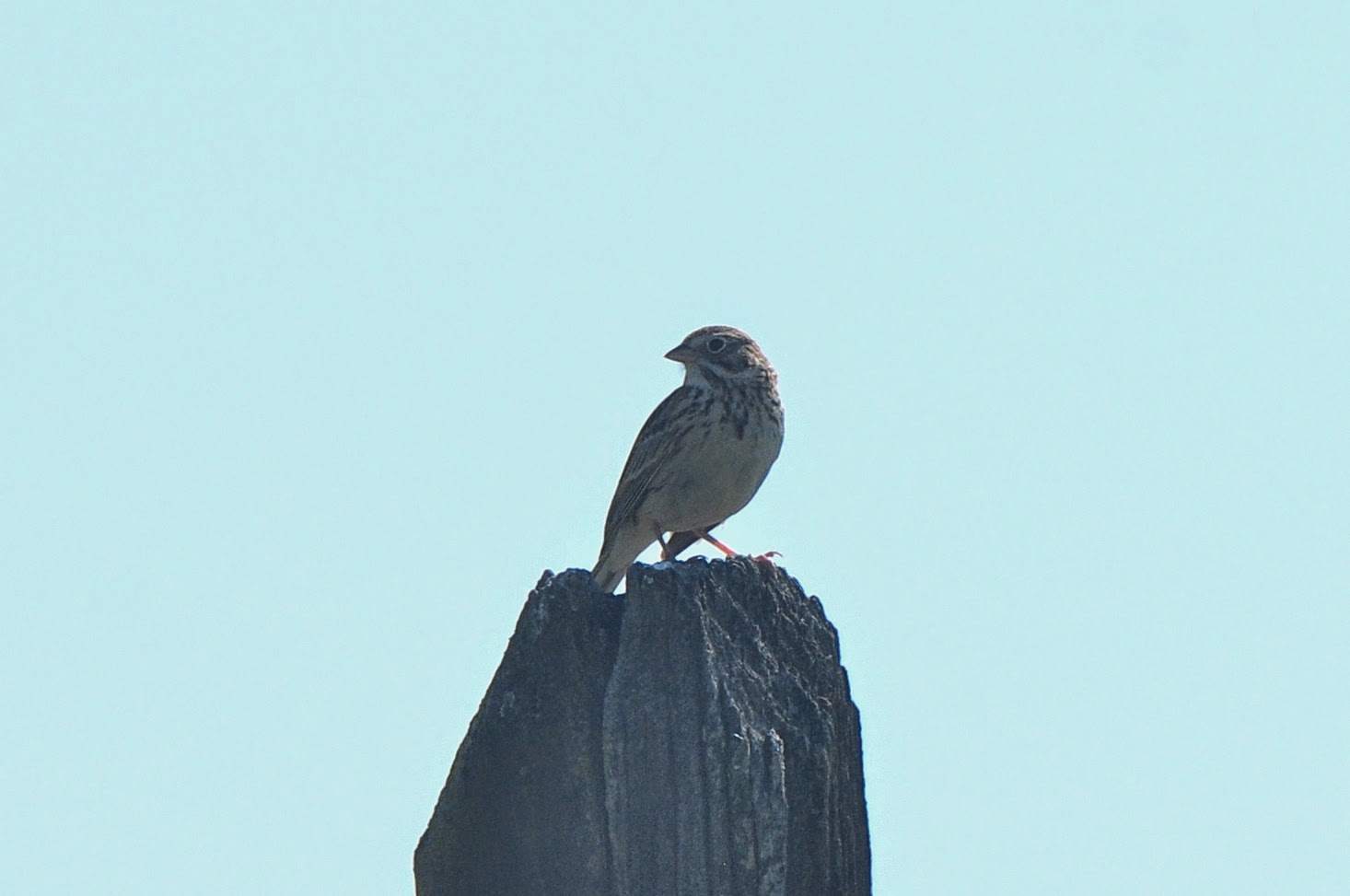 The big bold eyering gave it away though and after we got a better angle on it, it was clearly evident that this was a VESPER SPARROW: 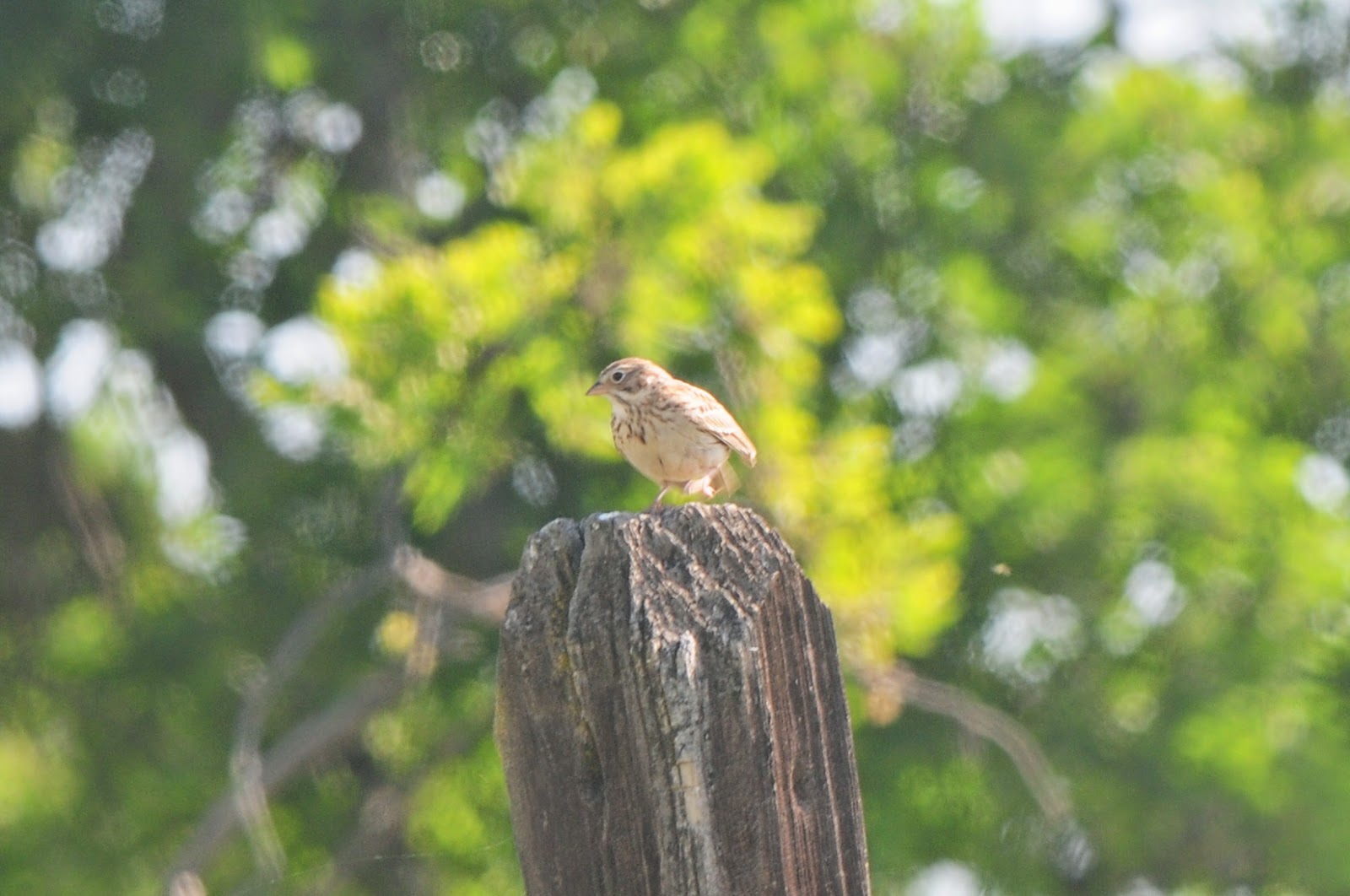 This species is fairly rare here, I believe it's only my second county record.

After we left the grasslands, we thought we were done birding but on the drive home, this young GOLDEN EAGLE overhead caused us to do a U-turn and to snap some pictures: 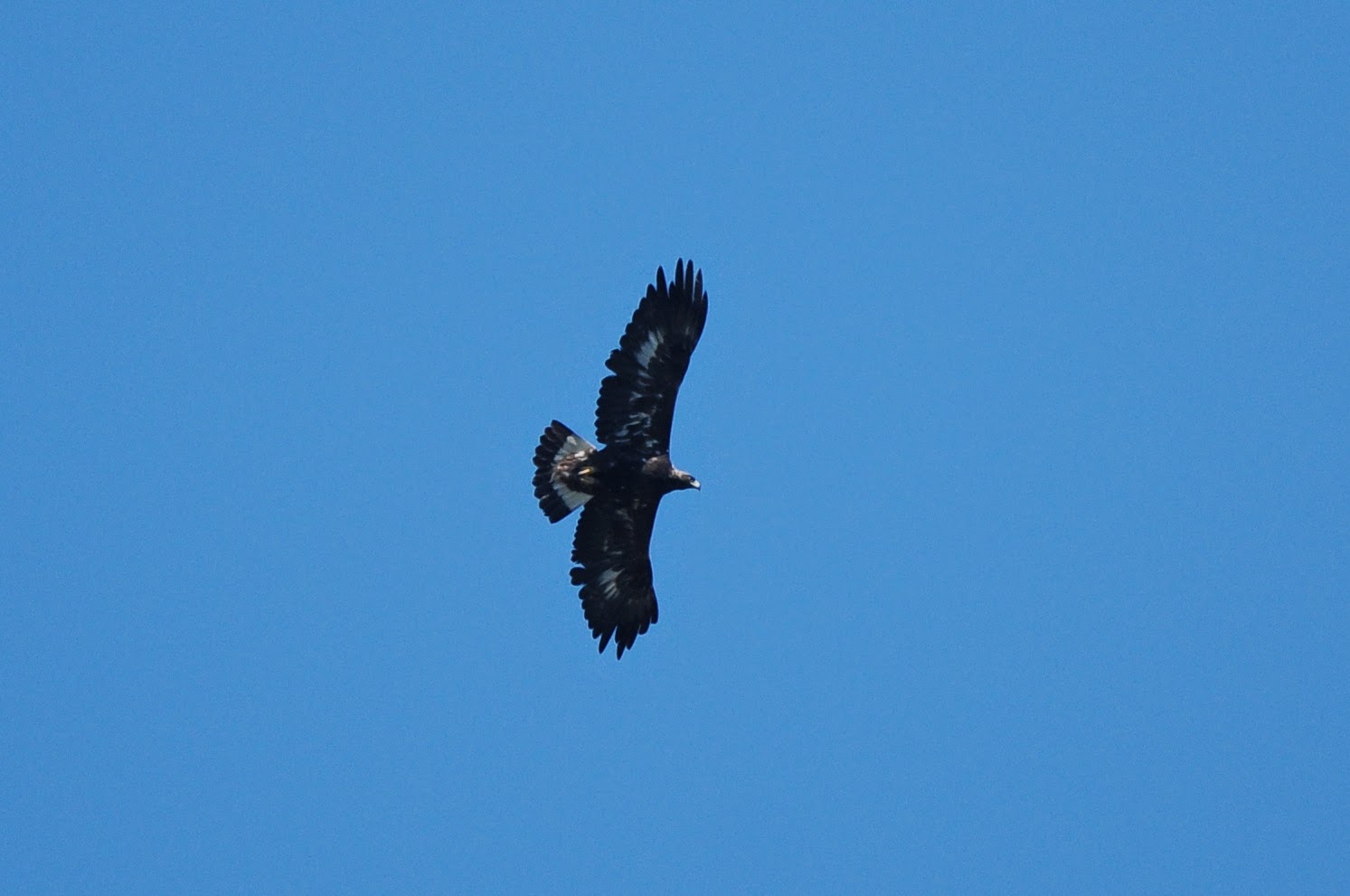 It seems that in most places of the Central Valley, GOLDEN EAGLE is actually the more-likely eagle you'll encounter (yes, BALD EAGLE is quite uncommon out here).  However, the tables get turned here in Sacramento County; it's my opinion that you're more likely to see a BALD than a GOLDEN.  Anyway, this particular GOLDEN was only my 4th record for the county.

Fast forward to a different day, we headed up to some hill country but this time to the west of us, towards the Inner Northern Coast Range (drive west on I-80 to Vacaville and then head north; from there you can take a number of mountain roads leading up to the west).

On this particular visit, we ventured up Gates Canyon and then Mix Canyon, the latter being one of my favorite spots anywhere near here.  I like it so much because of how the habitat changes dramatically by the top; the thick chaparral on your way up is home to many species like WRENTITS, MOUNTAIN QUAIL, and CALIFORNIA THRASHERS.  We digiscoped this particular thrasher with my iPhone and scope adaptor: 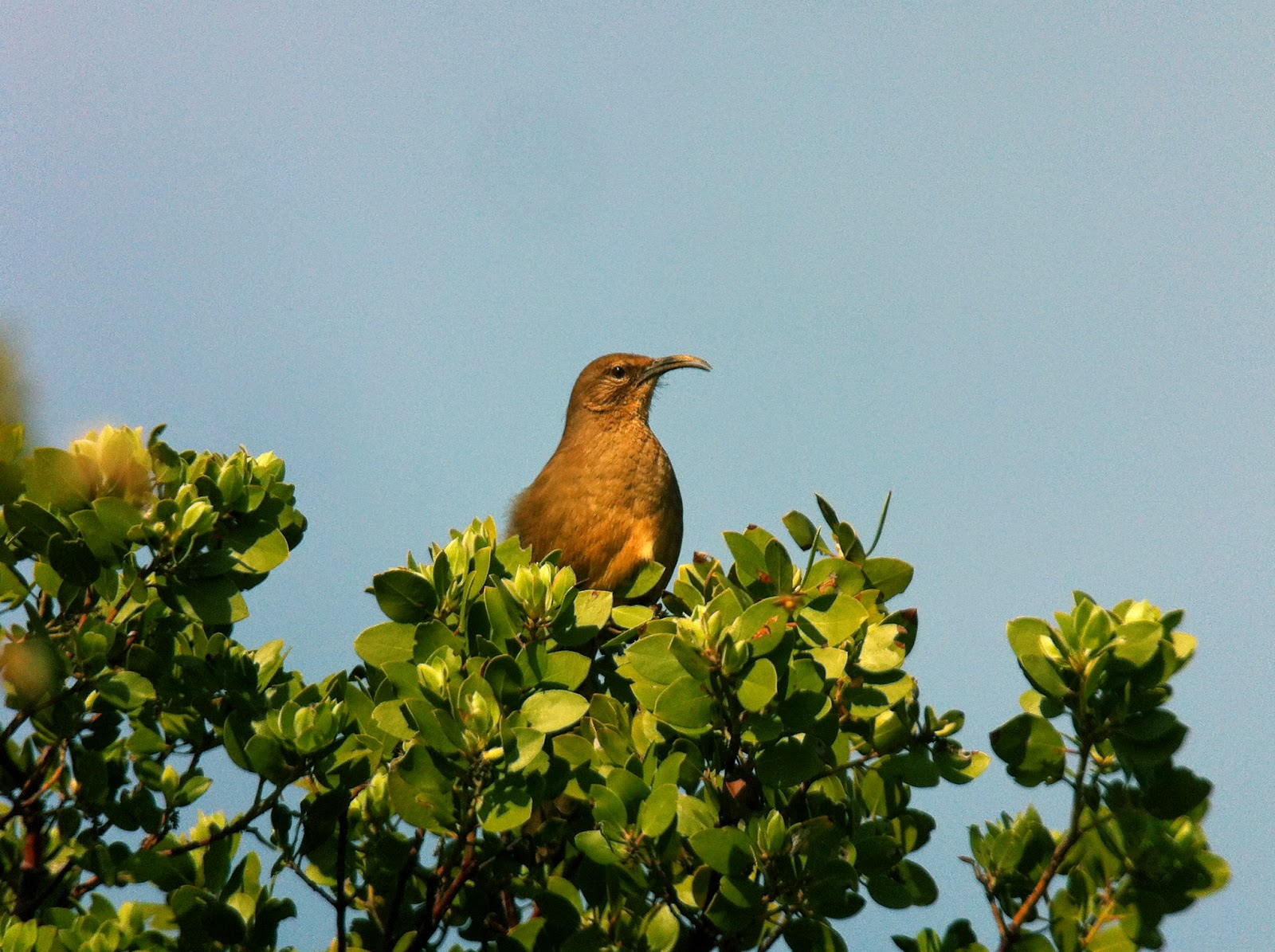 A highlight for me were the several calling MOUNTAIN QUAIL we heard at various stops.  This uncommon species is another that I definitely didn't grow up with!

Once you arrive at the top of the hills, you'll quickly realize you're in some cool habitat.  In fact, the thin chaparral is home to the uncommon BELL'S SPARROW.  Just last year this species was split off from SAGE SPARROW (which was then changed to SAGEBRUSH SPARROW).  There was one tame pair of BELL'S SPARROWS along the road and the male, which was busy singing, was easy to photograph: 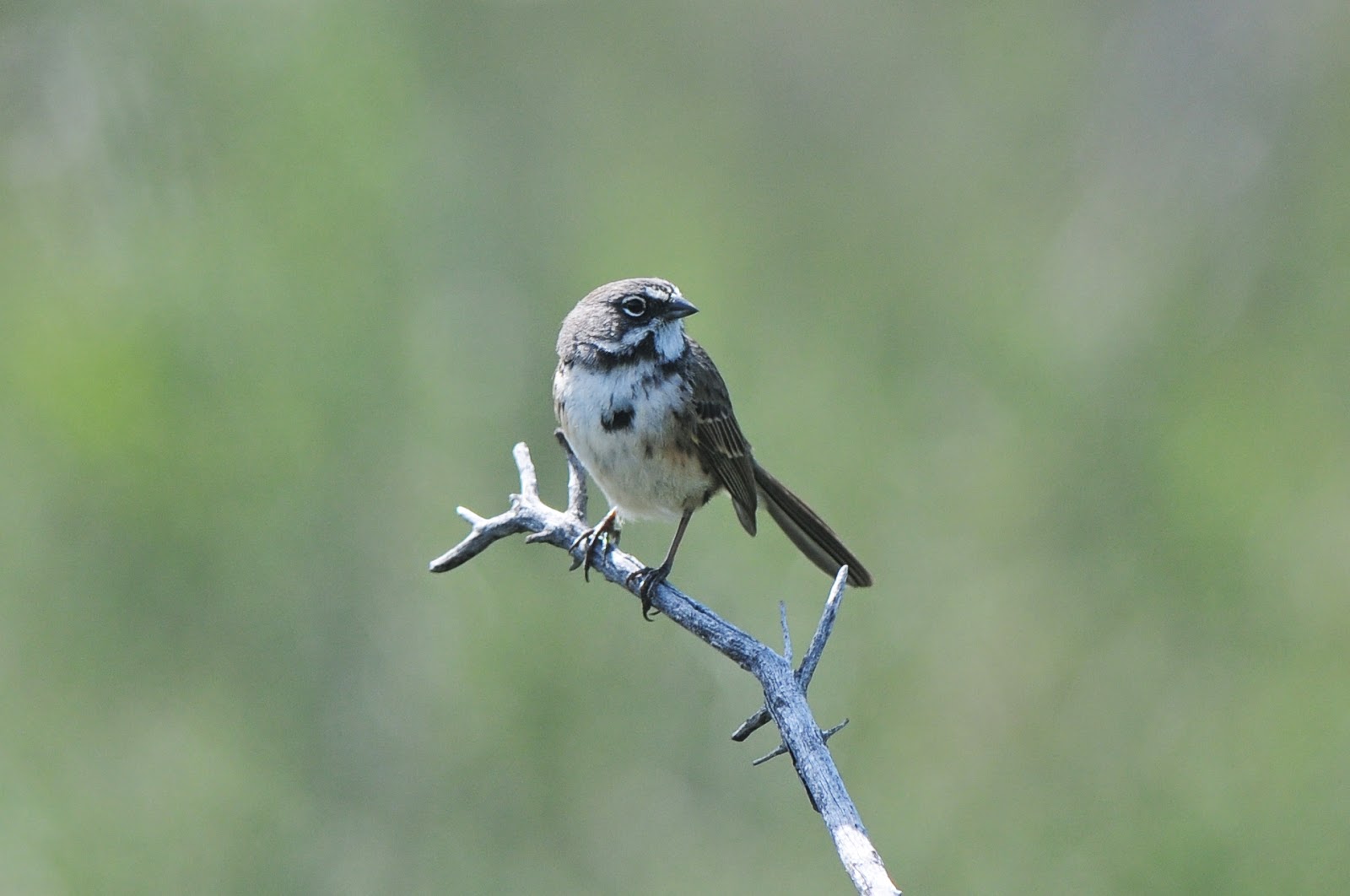 I also put the scope on the bird a few times and took some more photos and movies: 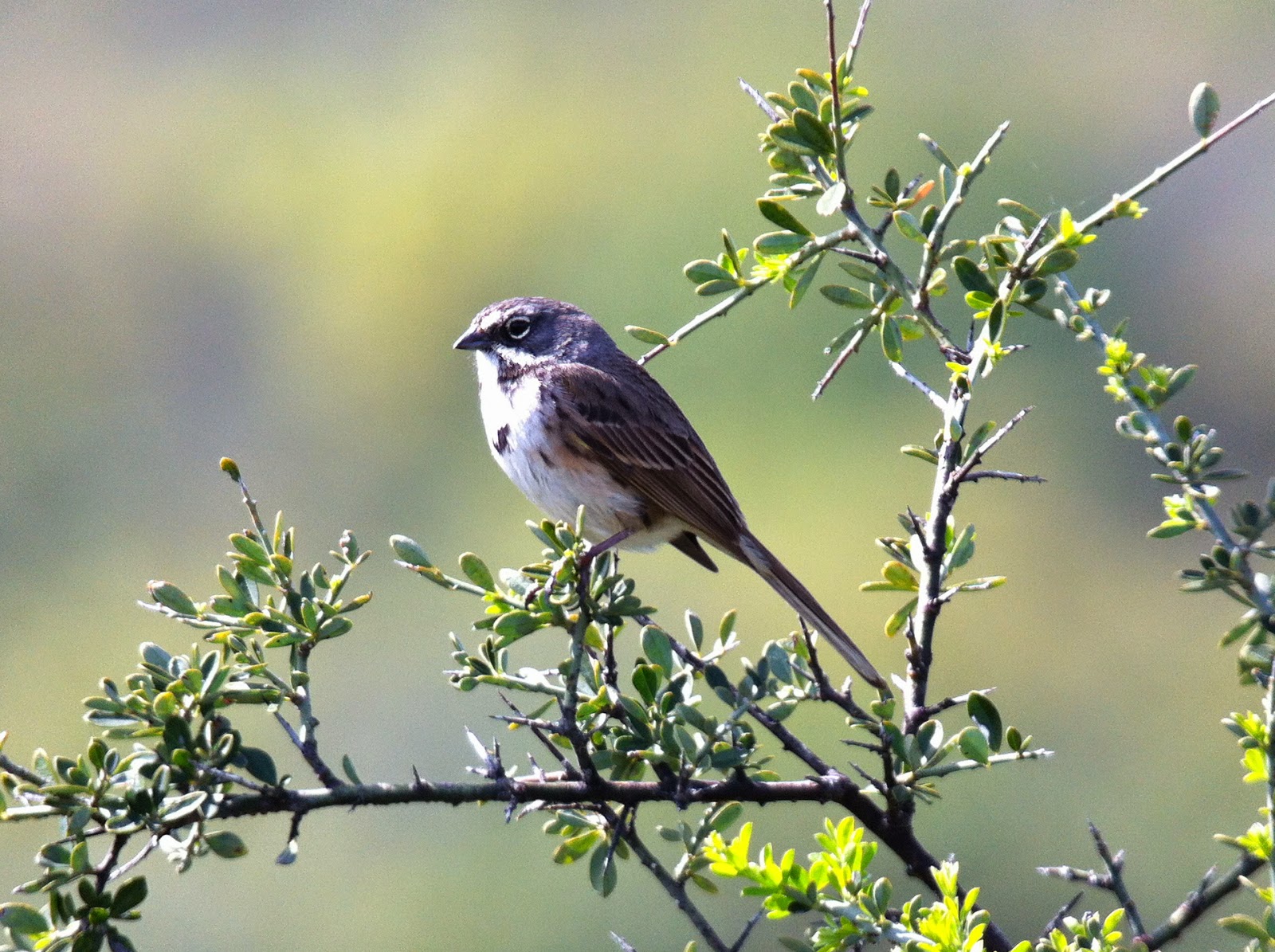 I uploaded a video I took of a BELL'S SPARROW singing onto my Flickr page.  Watch the video here.

All in all, it was a great day of birding.  Migrants were fairly obvious and species like CASSIN'S VIREO, WILSON'S WARBLER, and BLACK-HEADED GROSBEAK all put in appearances.

Today I wanted to stay closer to home so I instead ventured to Cosumnes River Preserve just south of where I live.  The highlight for me were two WESTERN SANDPIPERS, my first of the spring here in Sacramento County.

I also digiscoped this BLACK PHOEBE using my iPhone, Kowa adaptor, and scope: 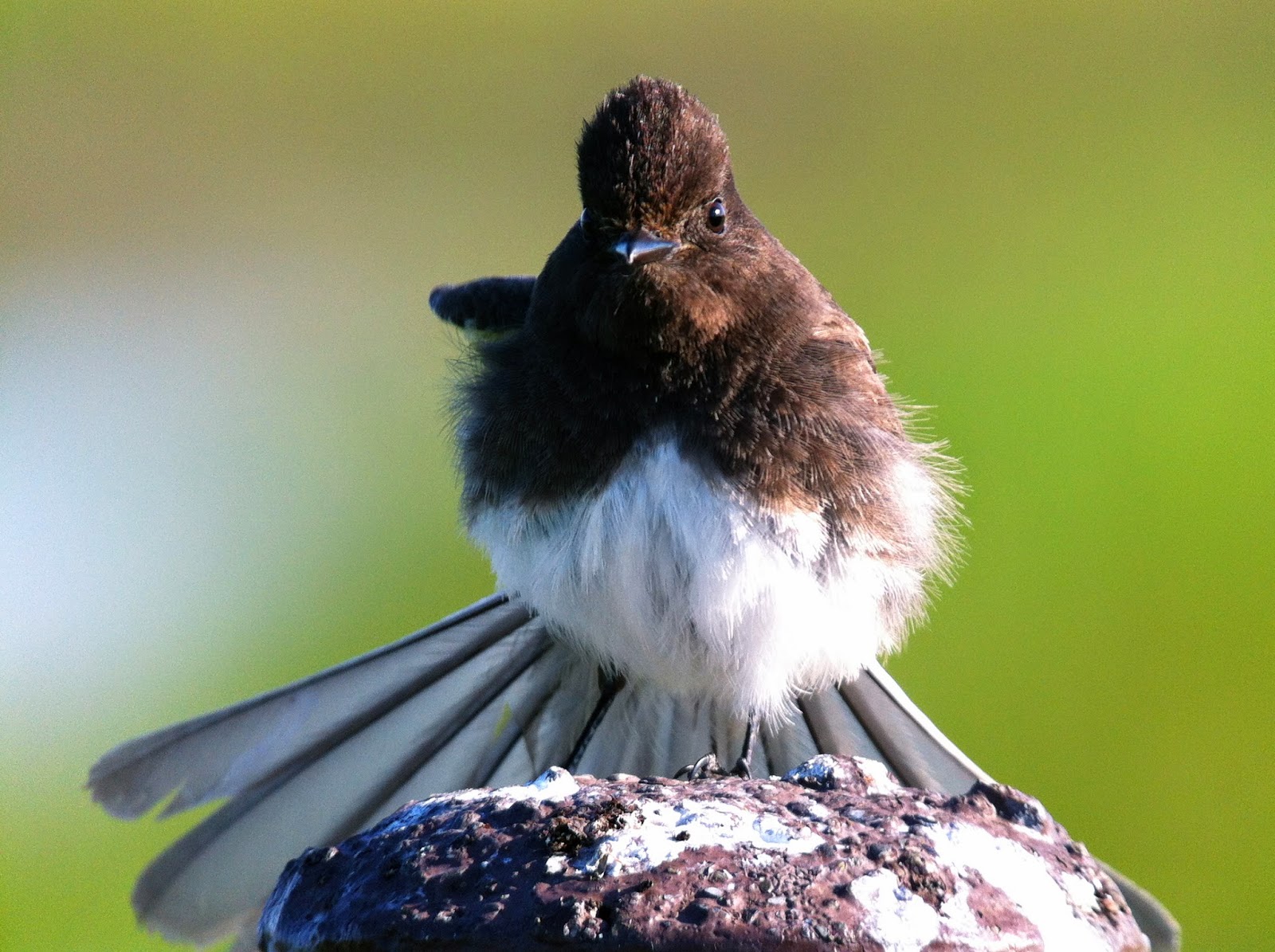 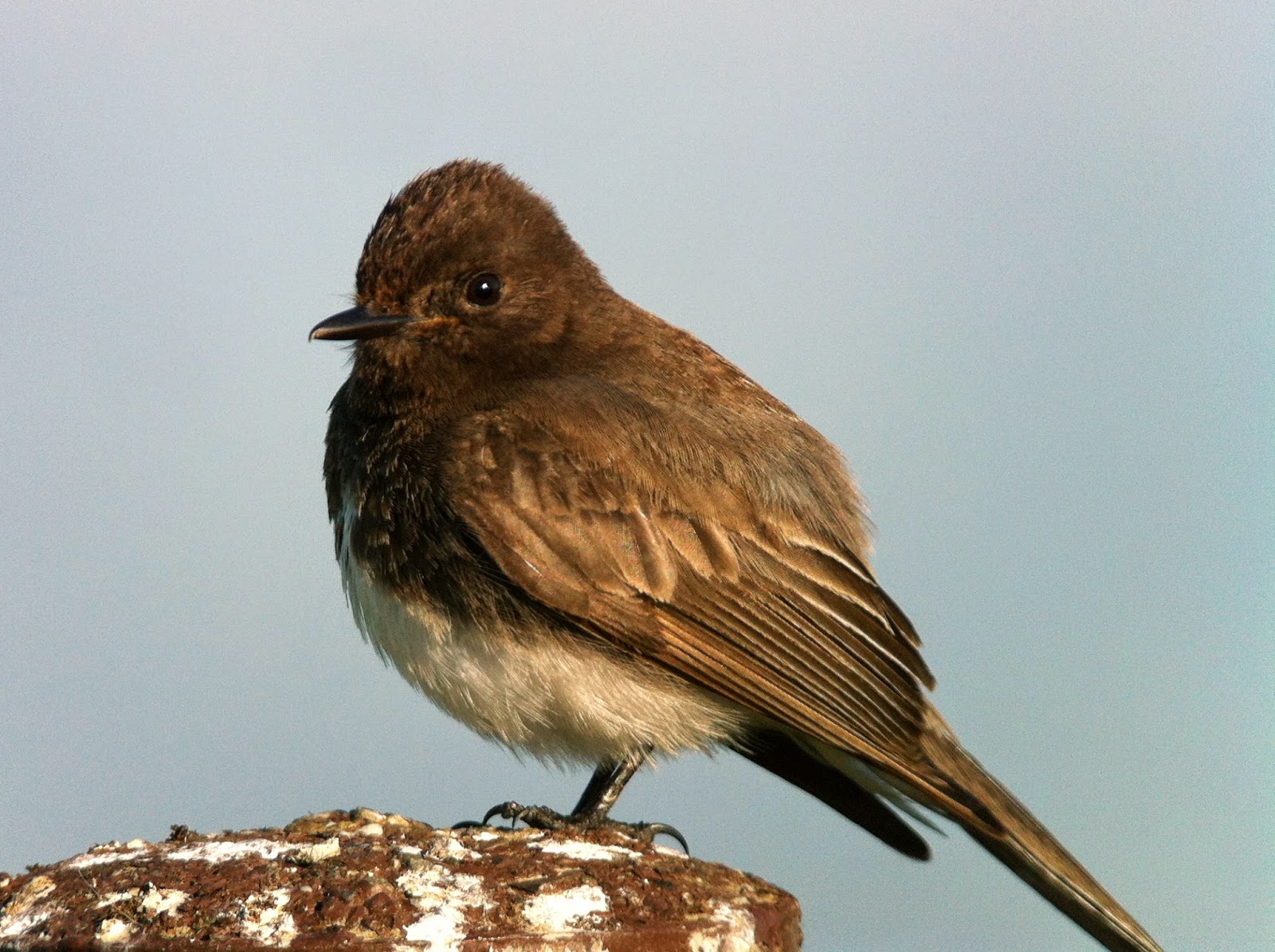 Anyway, that's all I have for you at this point.  Sometime soon I'll have another book review for all 6 of you readers.