"You've got to be kidding me"

That sums up the thought I had once I saw the listserve post last night.  Local birder Roger Muskat had found a MARSH SANDPIPER in Solano County and John Sterling was able to confirm it and get pictures.  The email didn't come through until after dark so, naturally, I suddenly had somewhere to be the next morning.

Marsh Sandpiper is a small and slender Tringa that belongs in the Old World.  It's related to yellowlegs, greenshanks, tattlers, Willet, etc.  There are about 10 other ABA records of this species but all in fall (most records from the Aleutians, also 1 record from St. Paul Island, and 1 record from southern California).

A look at a map shows that this mega rarity, only the 2nd one to ever be seen in the Lower 48, was found less than 14 miles from where I live (what are the odds of that)!  But since I'm no longer allowed to traverse the countryside in my Jetsons jetpack (too many regulations and paperwork), I'd have to follow roads to get there and that would take about an hour; yes, it's a long ways up and around the convoluted series of deep-water shipping channels, canals, wetlands, rivers, etc.

The yellow line spans from where I live (on the right) to where the bird was found (on the left): I arrived at the spot this morning shortly after 7 AM.  There were already about 100 birders looking at the bird but it was distant and quite backlit (they were looking east longwise into the roadside drainage ditch where the bird was feeding).  I got on the bird and, honestly, it was easy to pick out based on relative size to the Greater Yellowlegs, the tall and spindly legs, and the extremely thin bill.

The birder hoard was itching for some face-melting views of this mega rarity and decided to drive past the bird, stop beyond it, and look back towards the shorbs with better light.  It didn't work.  The whole flock got up and circled.  Eventually the Marsh Sandpiper landed out in the pasture along with a few Greater Yellowlegs.  Shortly after, the bird got up again and flew back towards the traditional ditch but because of a few birders/photographers parked and standing right next to the spot, the flighty shorebirds kept flying and, as luck would have it, directly past the rest of us.  I snapped a few photos: 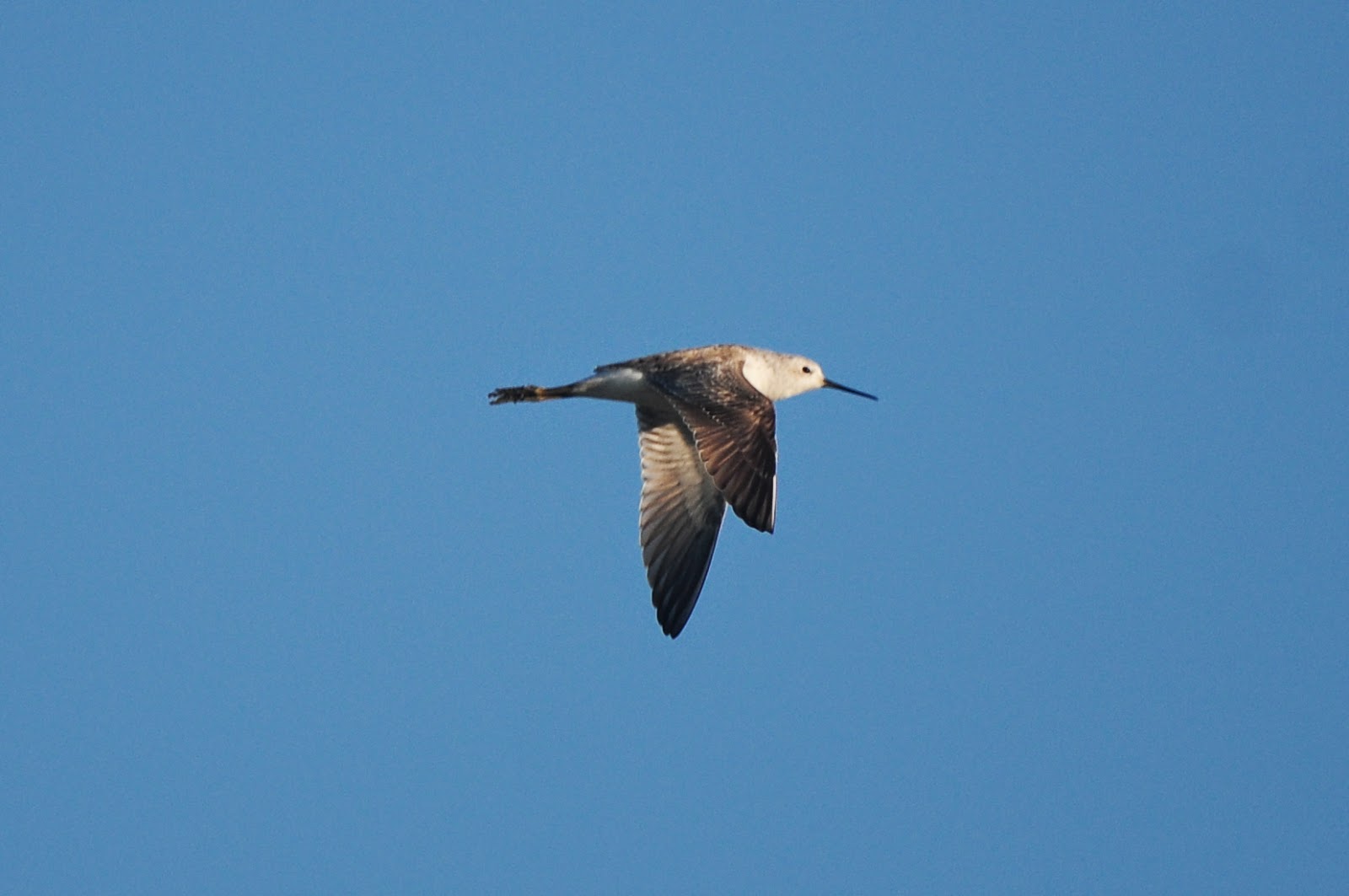 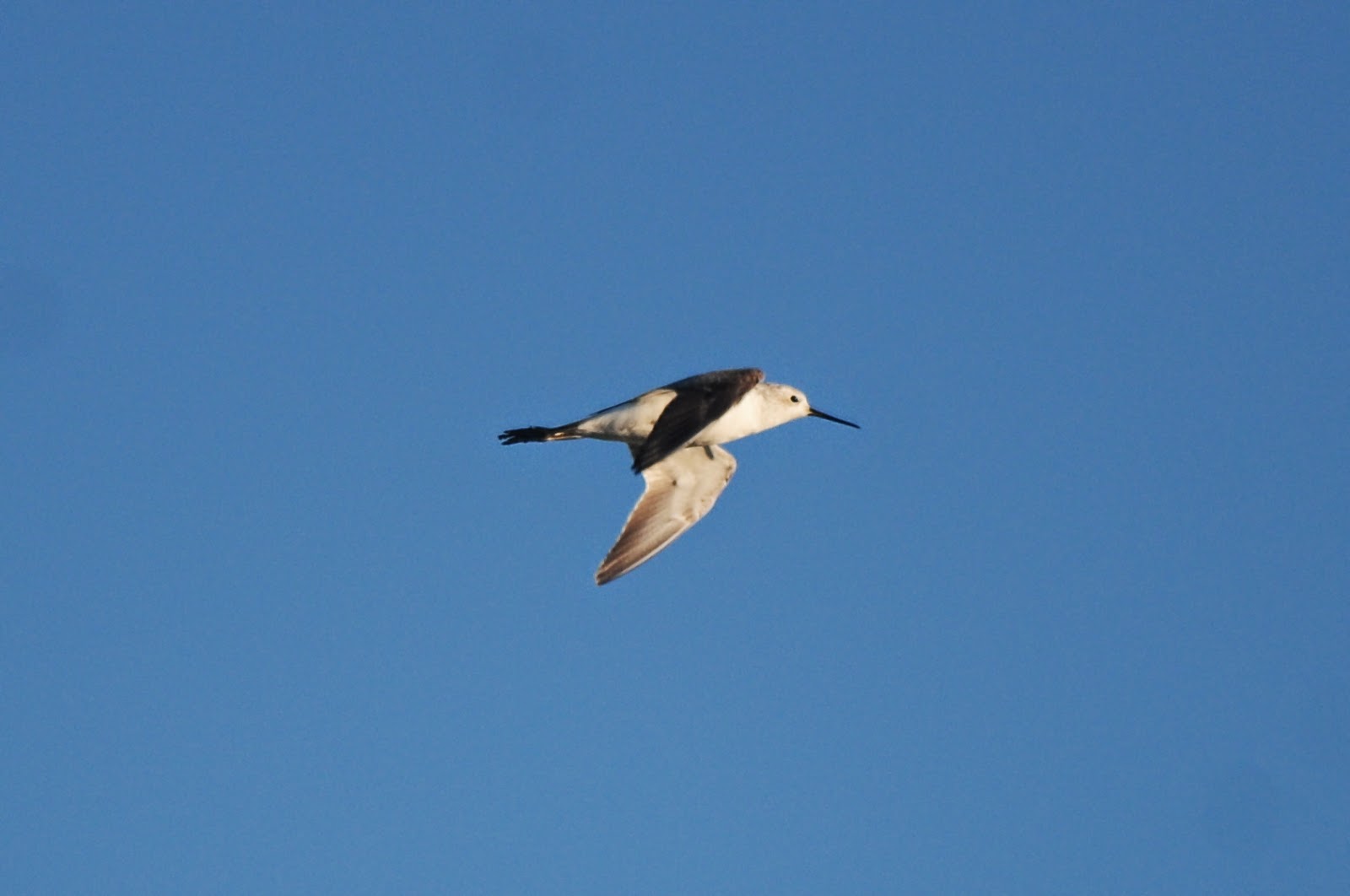 We watched as it dropped down to the east but even after birders drove that way to investigate, it was MIA, no one could find it.  I left shortly thereafter.

Remember, normal civilians, a rare bird was found so birders now own the road (jest, people, only jest): 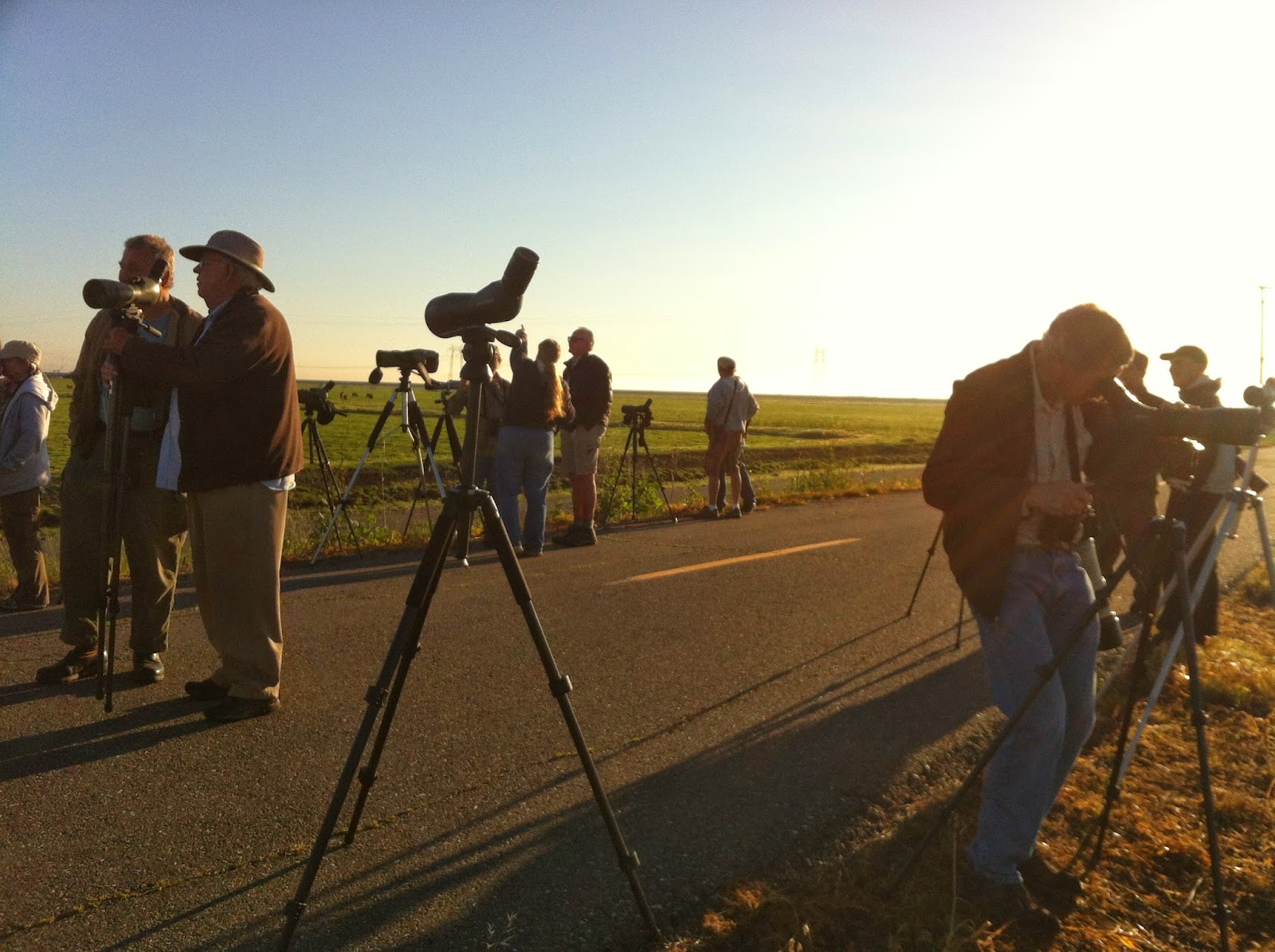 Either someone in the middle of this huddle has a donut for sharing or is letting people see a photo they took of the bird: 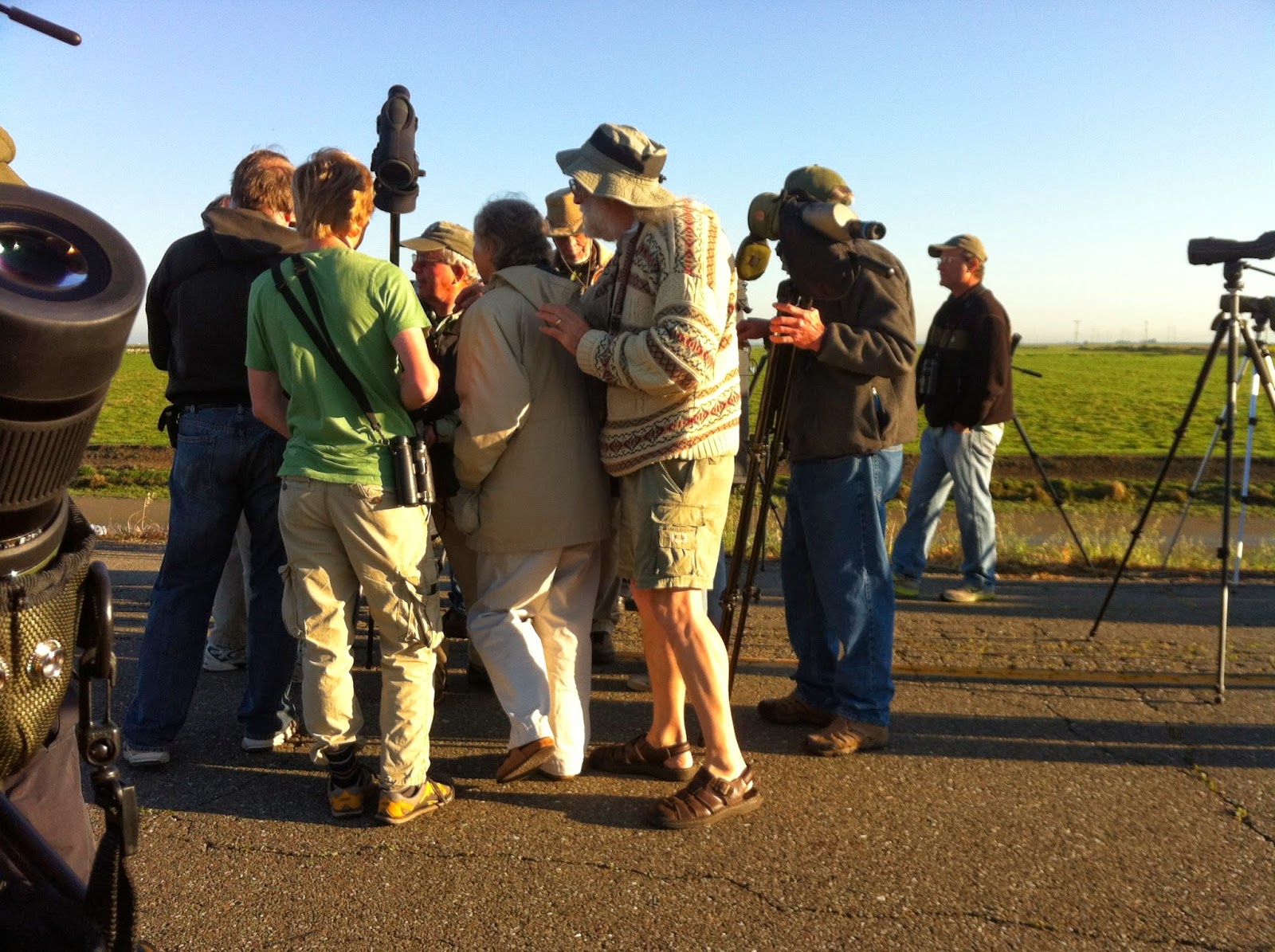 Cool bird though.  Major props to Roger who found the bird and to others who shared the news!

We returned to the spot yesterday afternoon (4/10) at about 3:40 PM.  It hadn't been seen since it flew away that morning but Ashley wanted to wait it out for a while so I reluctantly agreed.  Well, her persistence paid off!  At 4:43, it magically reappeared distantly in the ditch.  Speaking of the ditch, here's what we're dealing with: 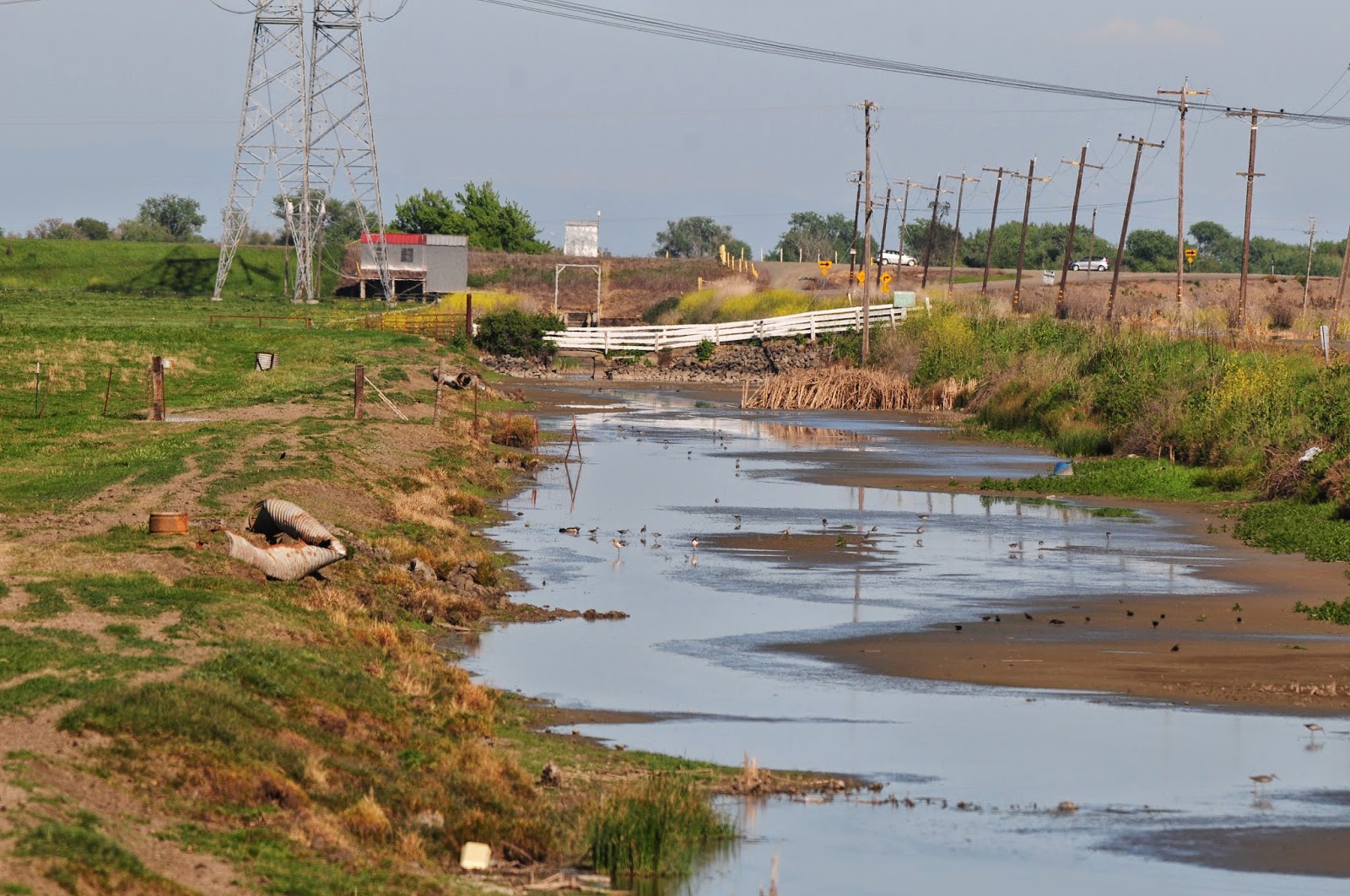 People have talked about the water level a good bit online; it apparently fluctuates from just wet mud to standing water and then back again.  It'll be interesting to see what happens with that.

After the call went out that the bird had reappeared, the cookie-eating birders that were loafing in/around the cars returned to their scopes: 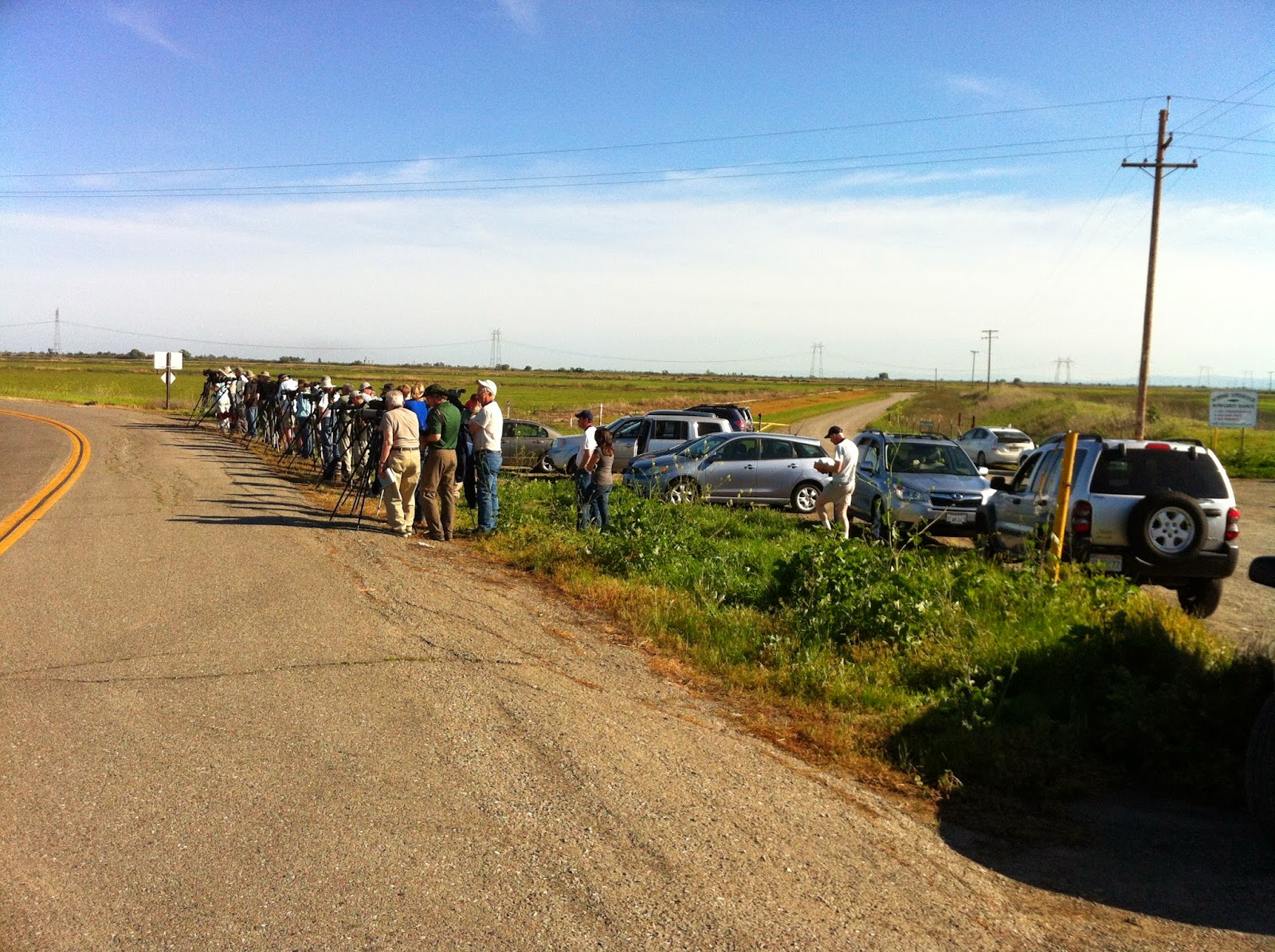 ... and soon thereafter, most of them agreed to start creeping up towards the bird: 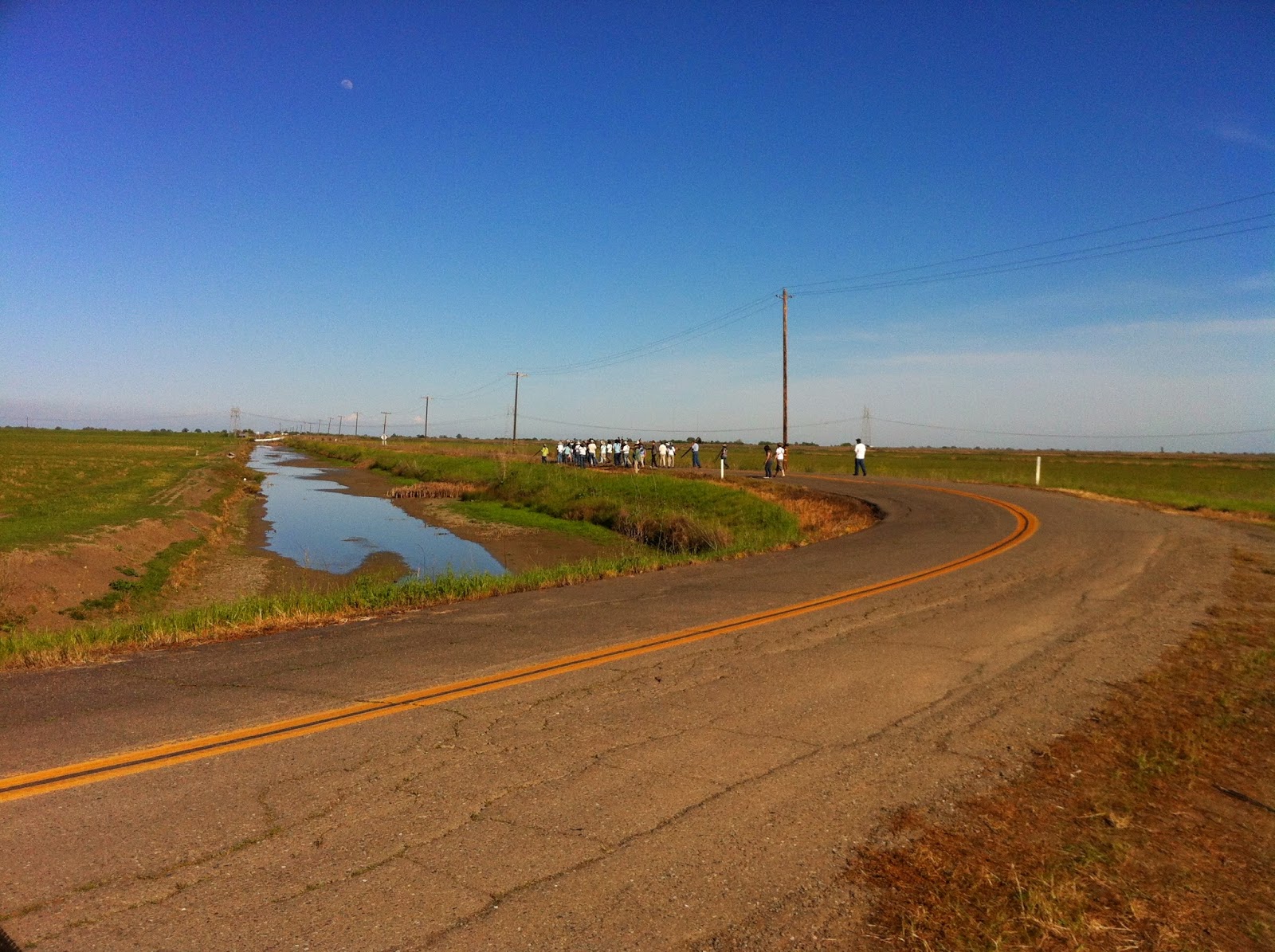