Taking advantage of a couple of days off for the holidays, we decided to turn our car in the northward direction and drive.  A ways.  One of our targets was the continuing TUNDRA BEAN-GOOSE that has been present in Tillamook County, Oregon for nearly the past two months.

We didn't have much time to look around; instead we took a quick stab at the goose and luckily were successful in finding it right away.  After pulling into the entrance of the Nestucca Bay NWR, it was feeding on the left side of the entrance road.  Here's a photo of it through the driving rain: 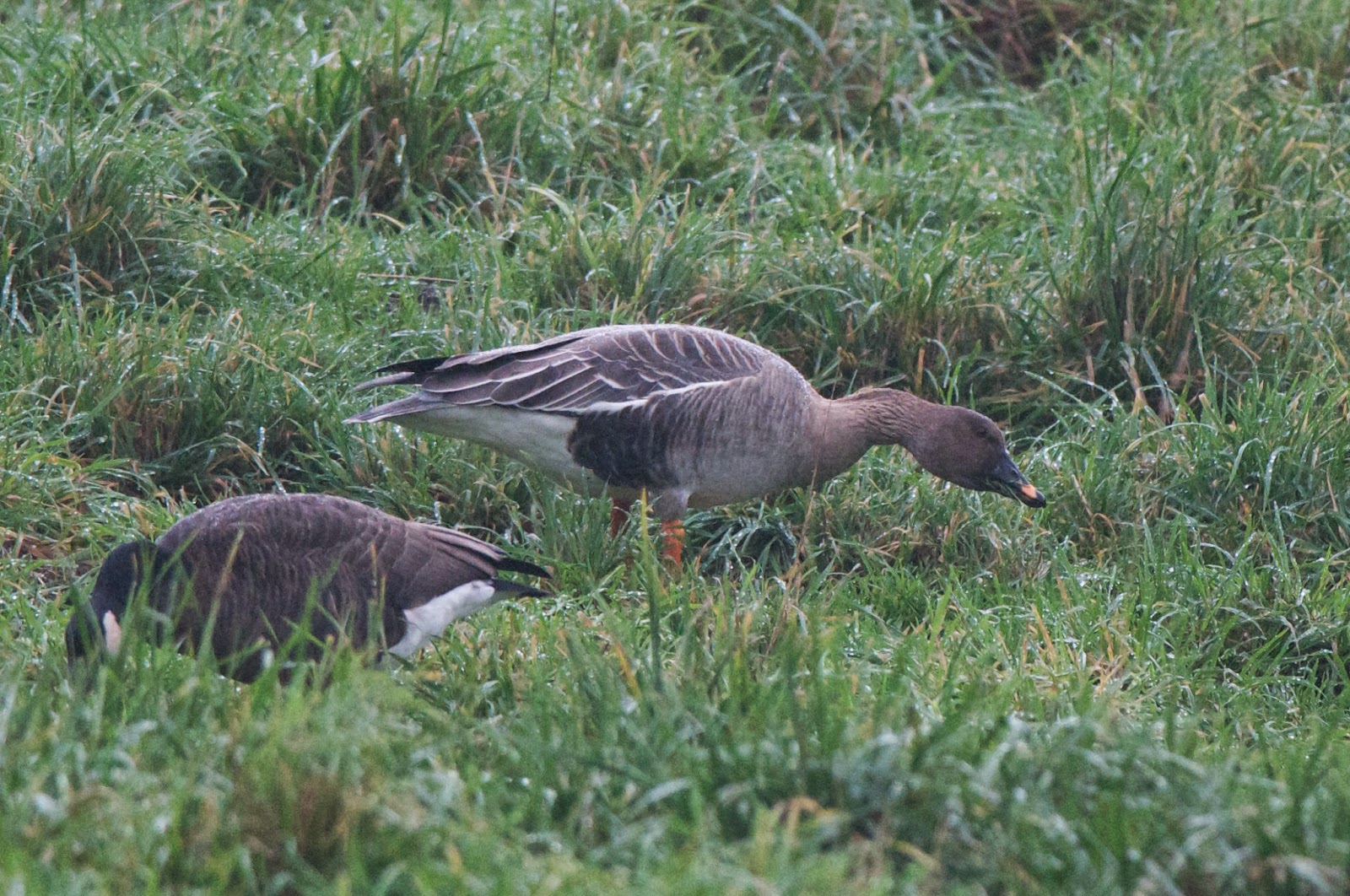 It seemed to hold its own when it came to defending its grass patch from the nearby "DUSKY" CANADA GEESE: 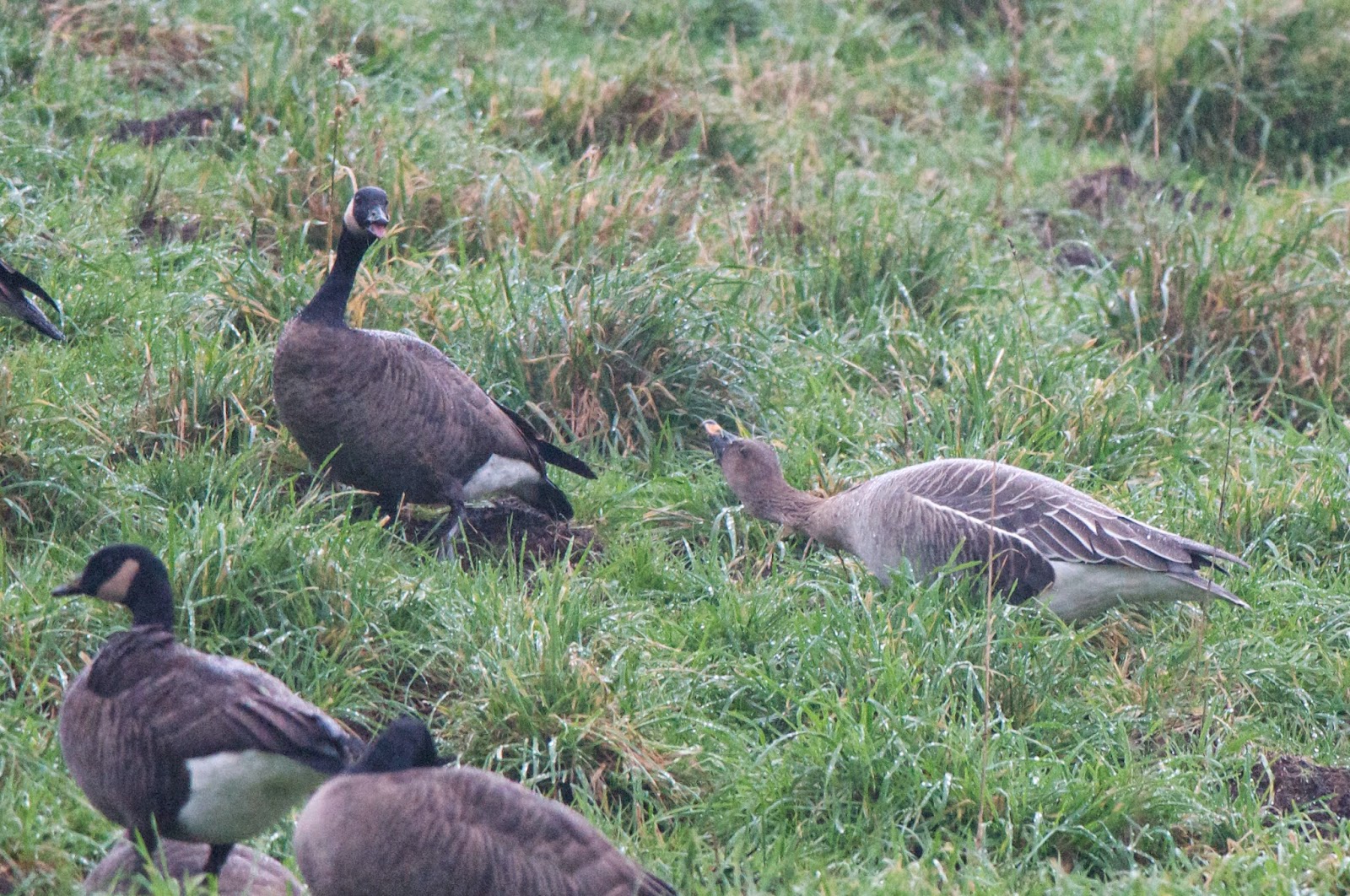 Anyway, here's our quick checklist.  This goose belongs on the other side of the Pacific Ocean and its presence here in North America has attracted crowds of birders.  Although I'm hesitant to talk about numbers, I do believe this was my 700th Lower 48 species.  Earlier this year, I got my lifer Tundra Bean-Goose but up on St. Paul Island (checklist seen here).

After that, we left and made a beeline down to NW California where a BRAMBLING has been present for the past month and a half.  We pulled in to the church cul-de-sac and settled in for a stake-out.  Luckily, Ash spotted the bird after only 15 minutes.  We both had good but quick looks before it darted away.  Here's our checklist.  This too was new for my Lower 48 list as well as being a state bird (I finally have a state list that's 4C+ now).  After that, it was back towards Sacramento.

Speaking of Sacramento though, I took a spin up Michigan Bar Road last week and was happy to find 3 MOUNTAIN BLUEBIRDS.  This is usually a tough species to see here in Sacramento County but this is my second time in the past couple of months: 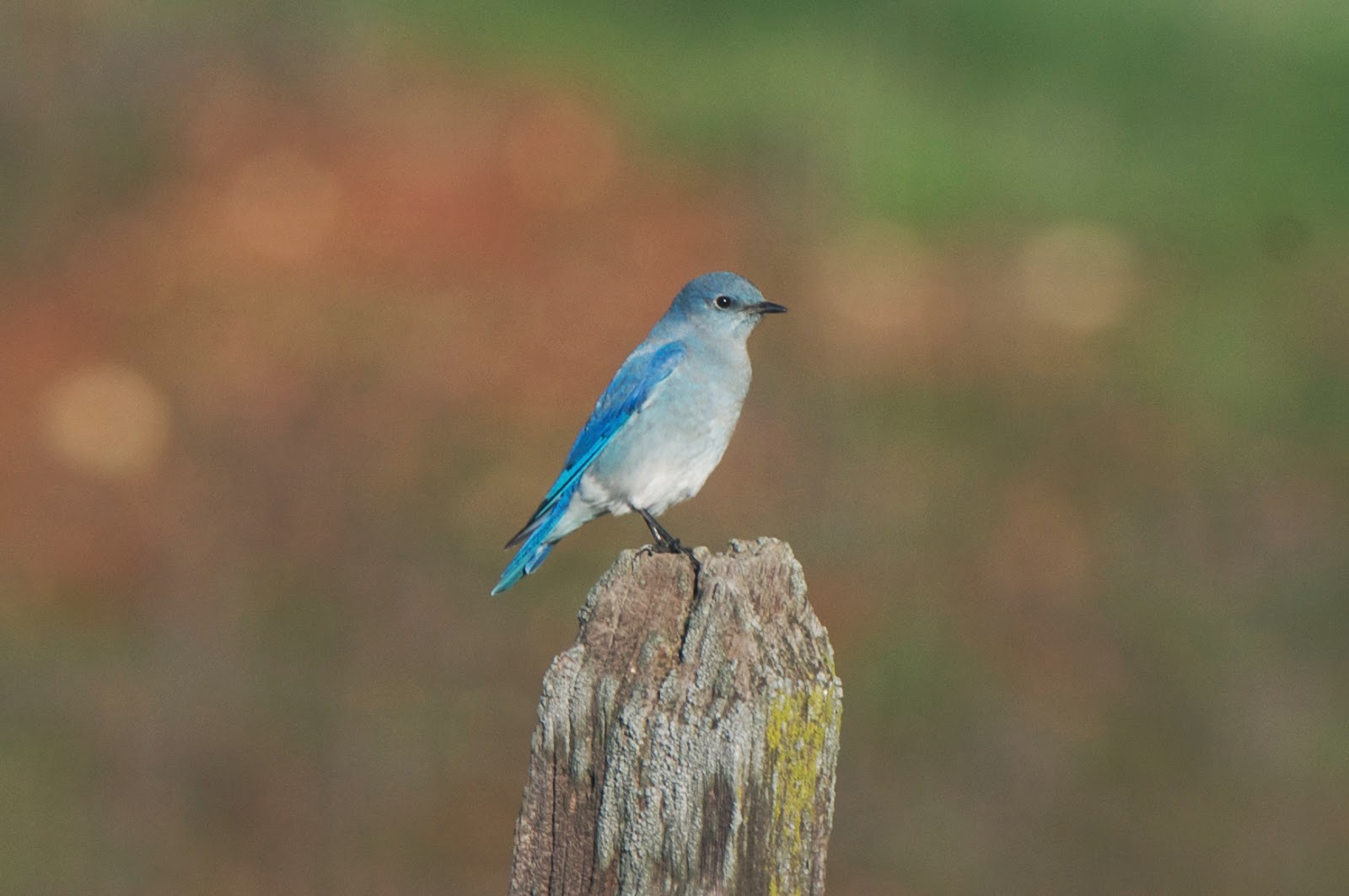 The invasion of BAND-TAILED PIGEONS continues.  This is also a species that's usually hard to find in Sacramento County.  Lately, though, Michigan Bar Road has had gobs of them.  Here's a distant one in a treetop: 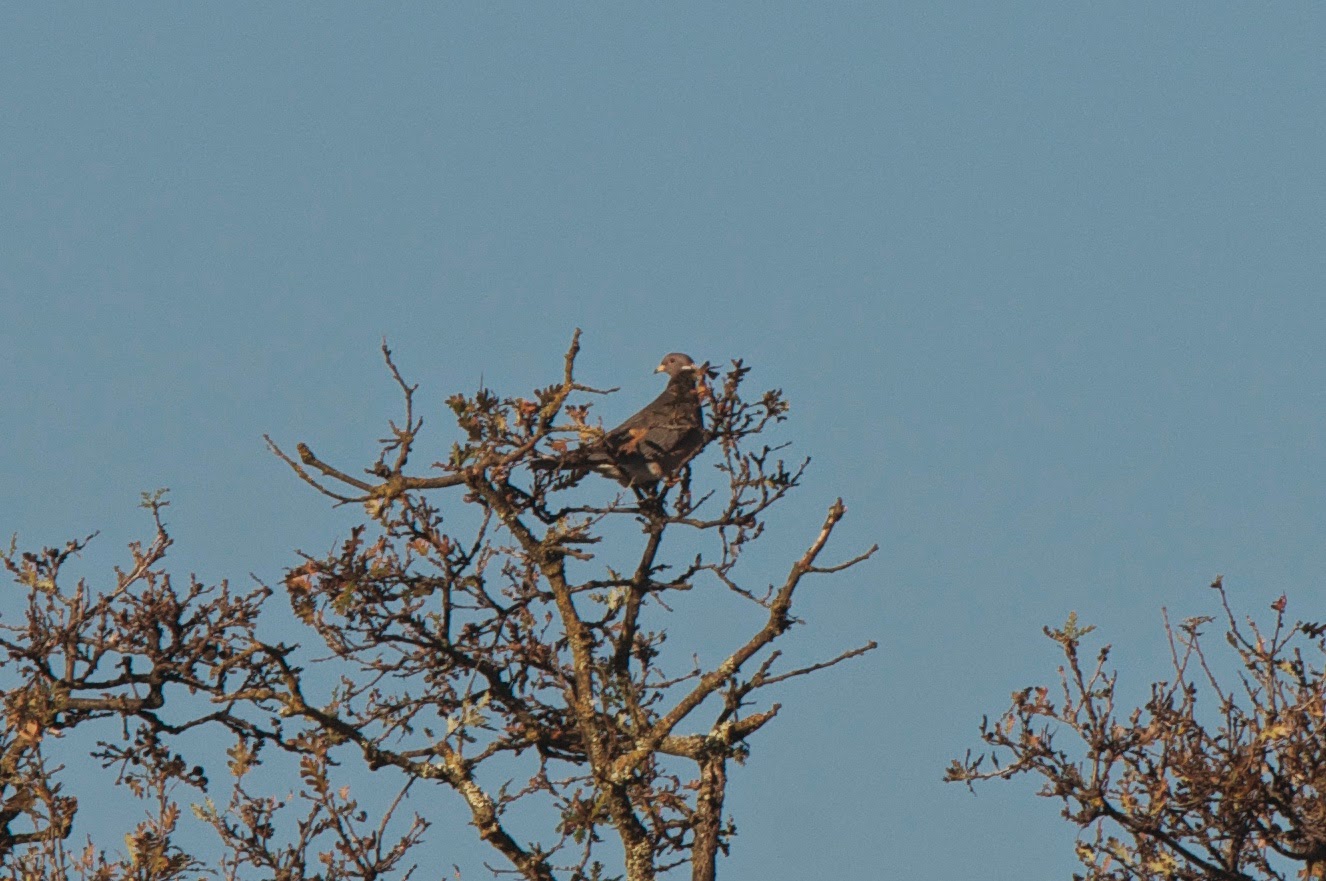 Not rare at all but still rather handsome, a RED-BREASTED SAPSUCKER put in an appearance on Michigan Bar Road as well. 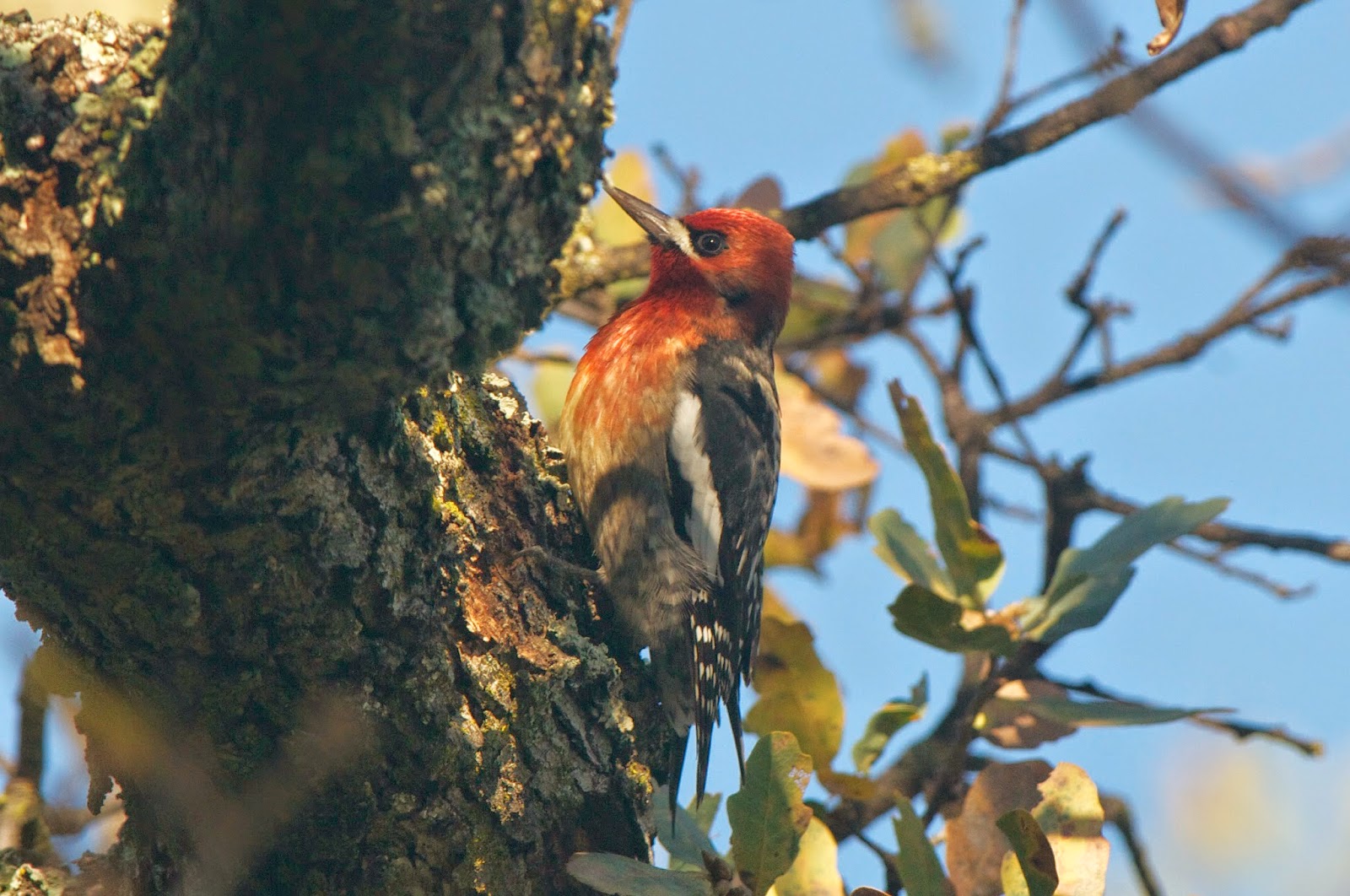 Anyway, here's my checklist from that outing.  I'll leave you with a view of Michigan Bar Road looking north: 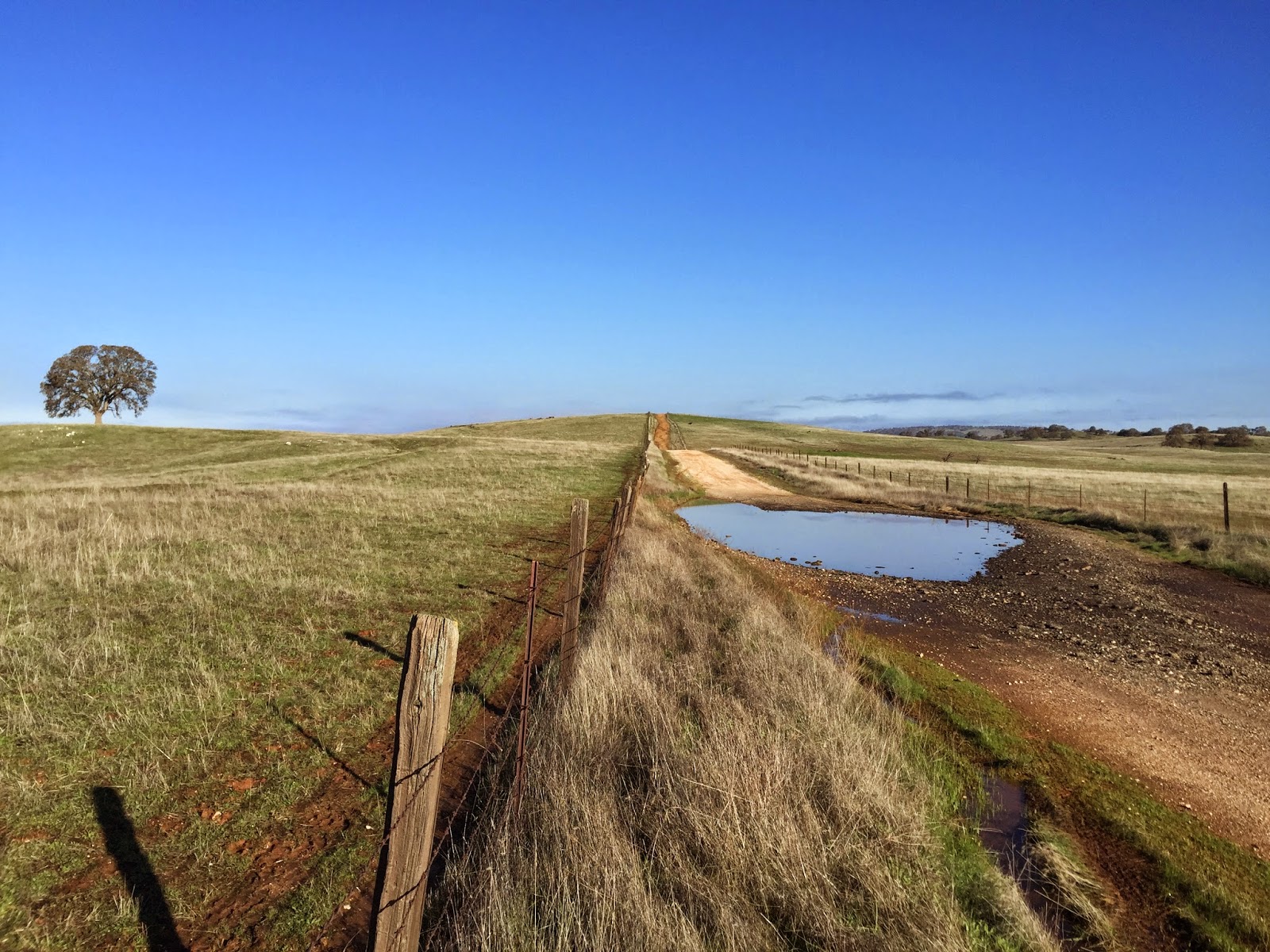