I'd like to revisit something for a moment.  More specifically, RED-FACED CORMORANTS.  I mean, yes, I'd like to revisit some cormorants but for now, I mean via this blog.  If you read this blog earlier this year when I was working as a guide in the Pribilof Islands in Alaska, you'd certainly remember me mentioning this species.

On a worldwide scale, the RED-FACED CORMORANT is a rather hard-to-see species but mostly because of a fairly limited range.  You will only find this species in the north Pacific from Japan, the Kuril and Commander islands (far eastern Russia), and eastward to the Aleutian Islands, Pribilofs, and other parts of southern Alaska.  There's roughly 200,000 of these left in the wild but, although fairly robust, it's said that the population trend is decreasing in North America (based on BBS/CBC data, at least).  The fact remained, before 2014 I had never seen one.

Now, spending a season on St. Paul has to be one of the best ways in the world to get to know this species better.  They're certainly the most abundant species of cormorant in the Pribilofs (the Pelagic Cormorant a distant 2nd place) and I'm not sure if I ever missed this species if I actually went birding.

When you see a RED-FACED CORMORANT, I'd wager that your attention is instantly drawn to the vividly red face! 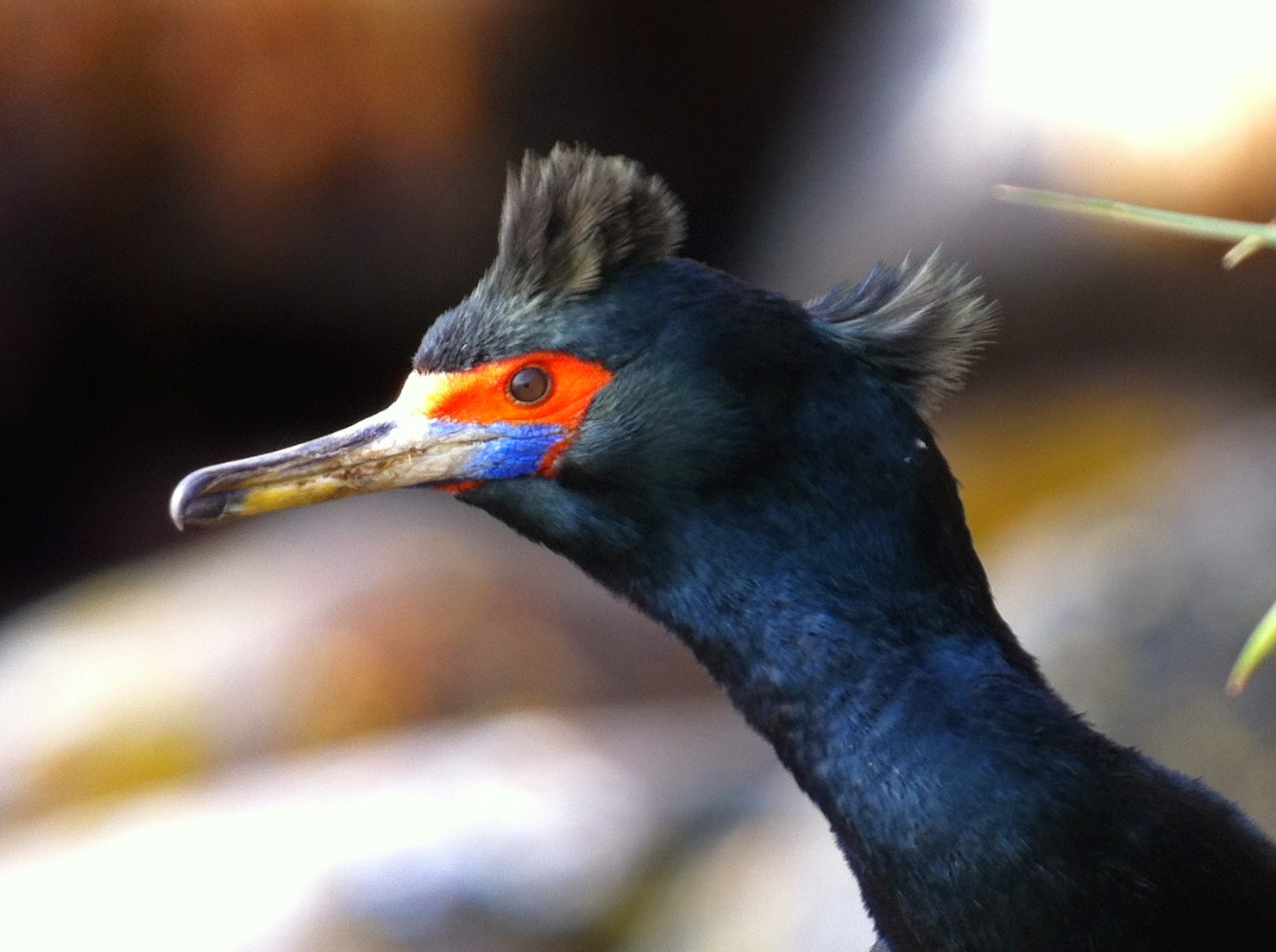 Besides the striking namesake, note the pale bill and the two tufts of feathers on the head.  This is what it looks like when the tufts are dry: 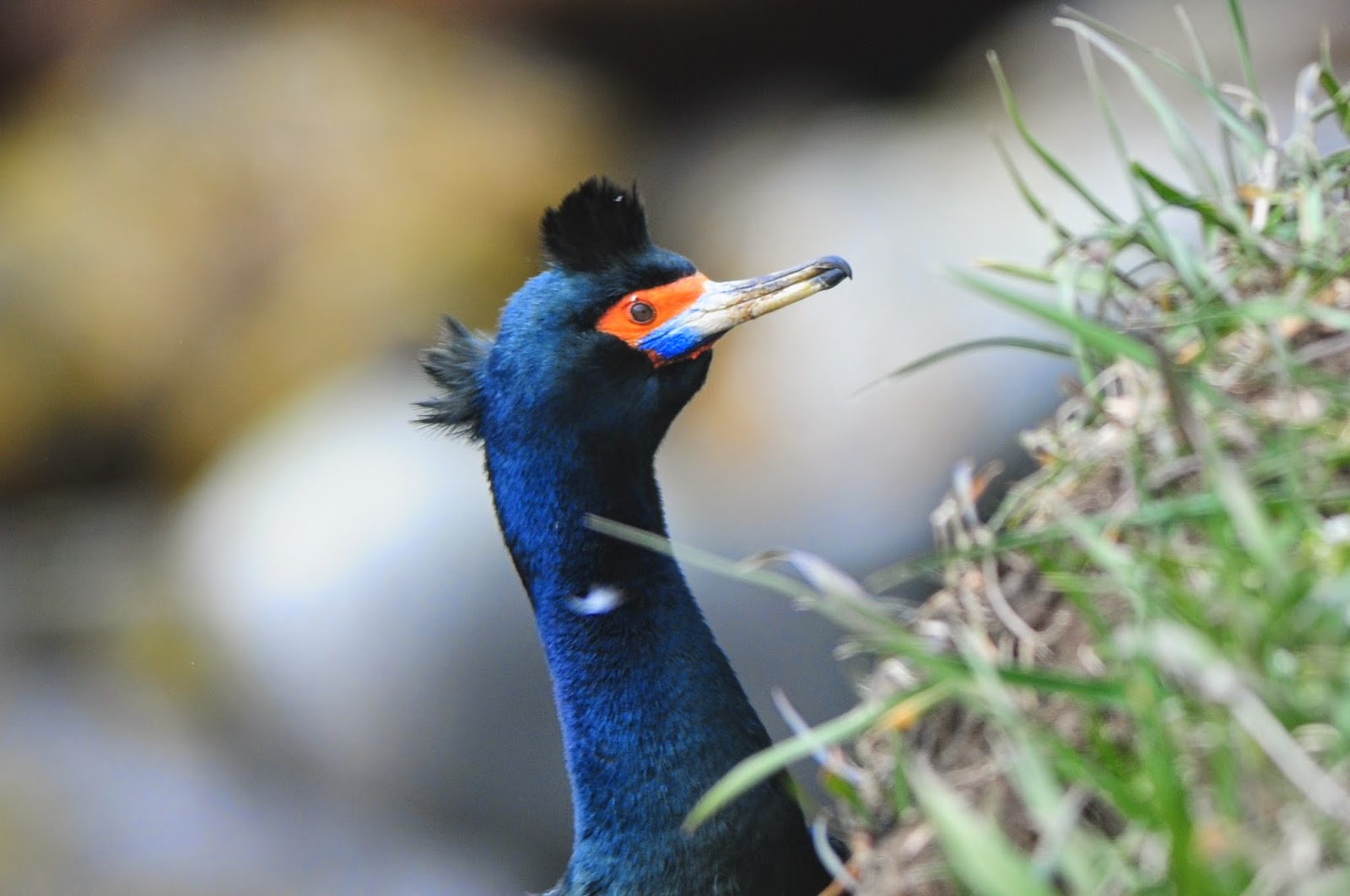 And here is a cormorant that's still a bit wet: 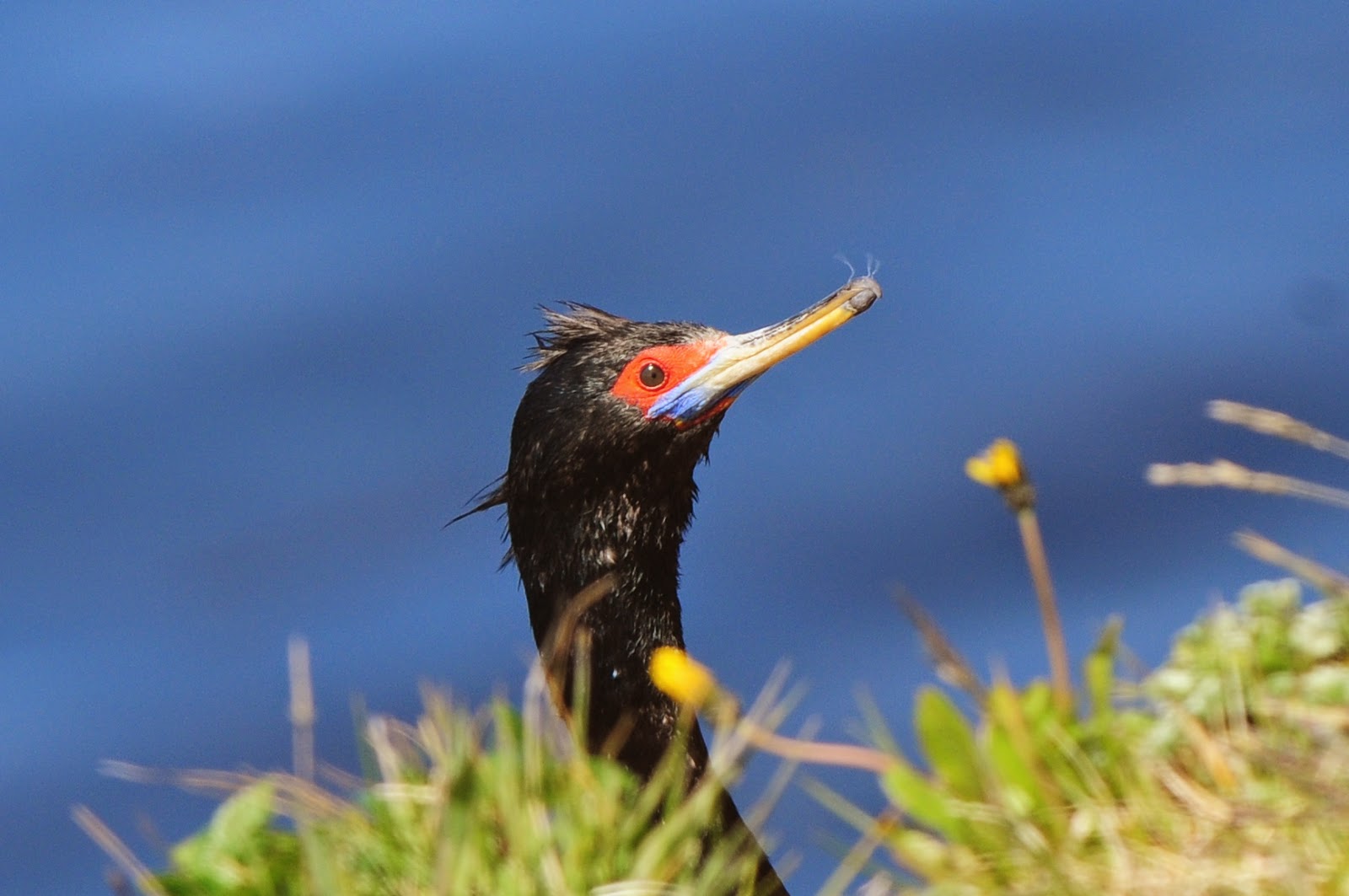 Most people gawk at the face and tufts (and who can blame them?) but, with that said, who's checking for banded birds?  Well, I was lucky to see several banded RFCOs during my stint on SNP.  Of course, I assumed they were banded right there on SNP because the FWS does indeed band cormorant chicks (and only chicks) there.  The question I had then was "when were these banded?"

Well, I submitted these band numbers to the Bird Banding Lab and I now have answers.  Let's start with #303: 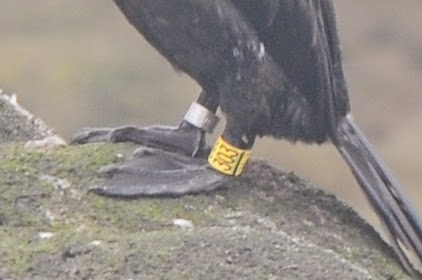 Below you can see the certificate: 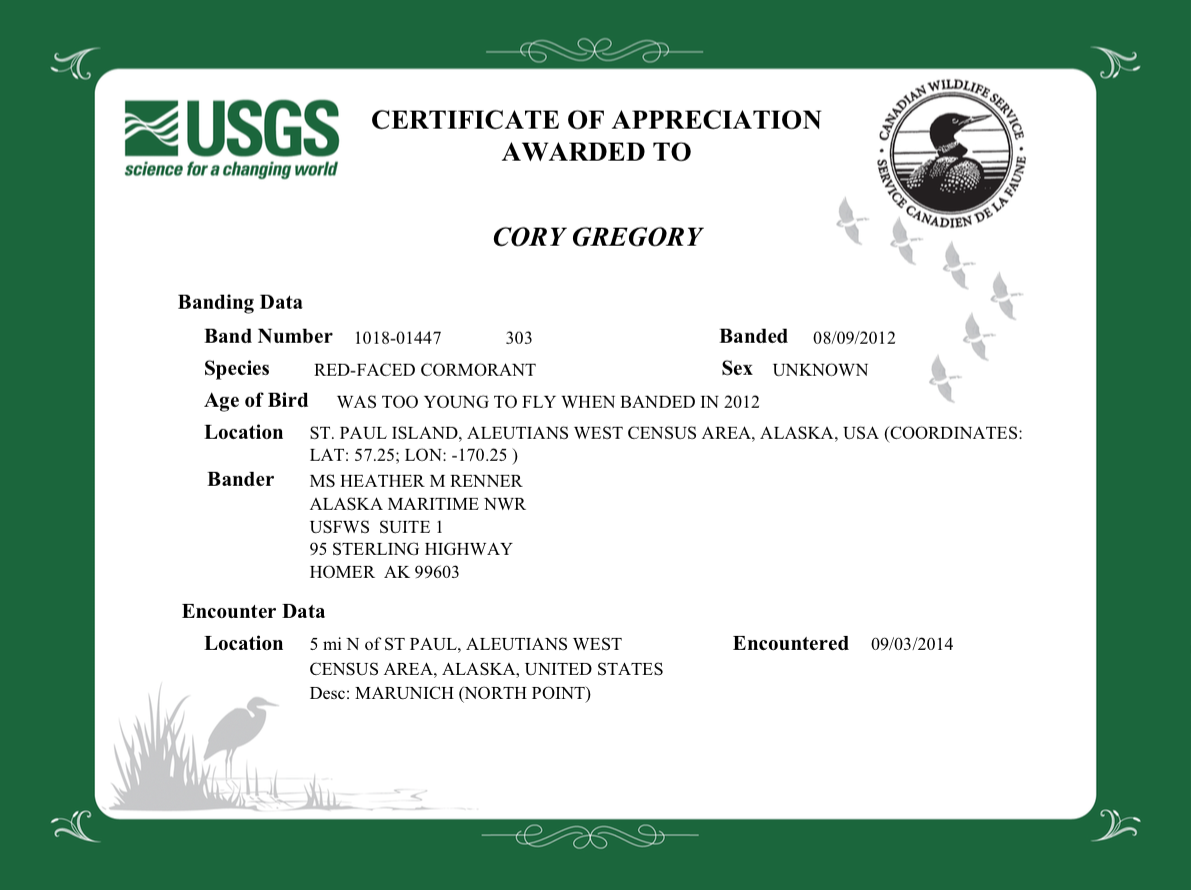 Looks like it was banded on St. Paul back in August of 2012.  So this bird was 2 years old when I resighted it. 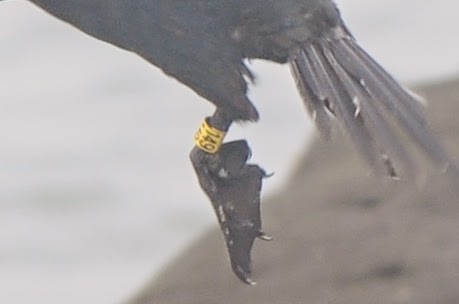 Here's the certificate from that resight: 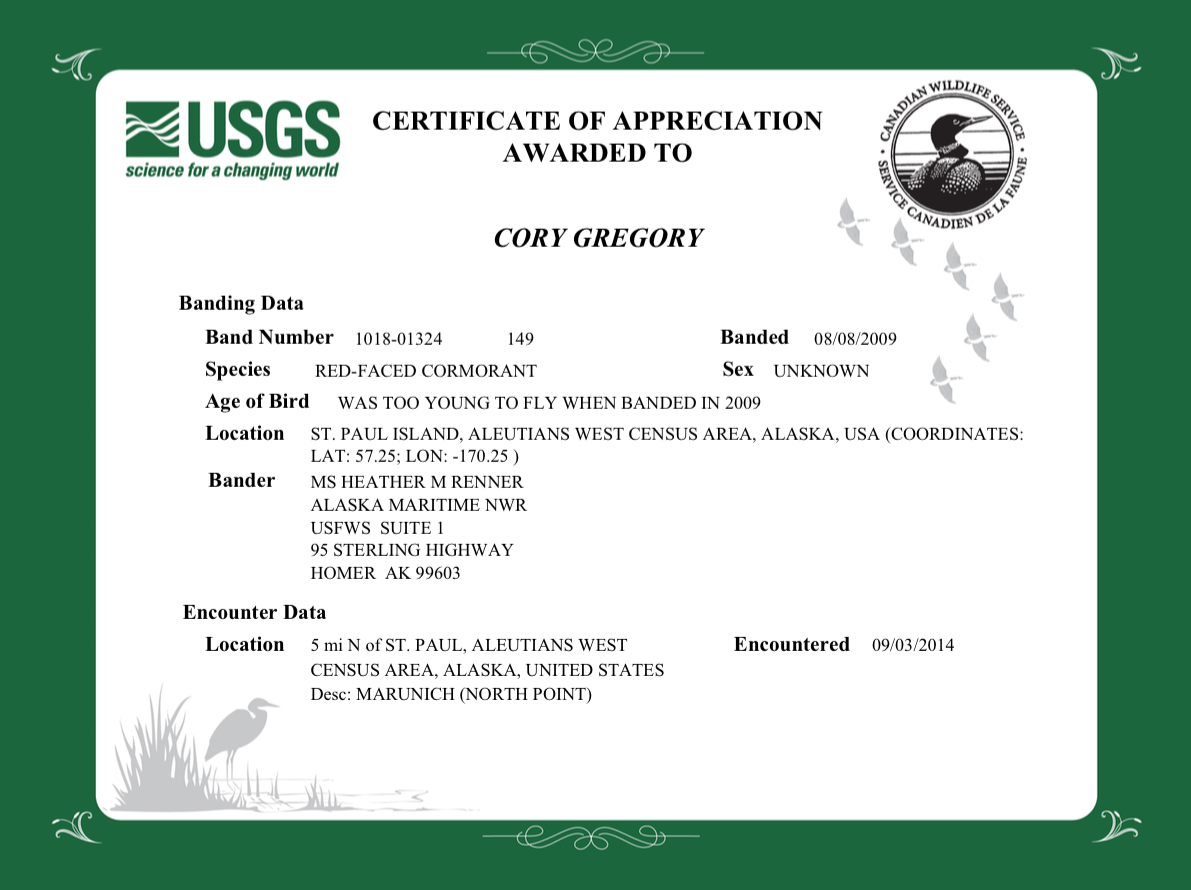 You can see that this bird was banded in 2009 which made it 5 years old when I resighted it this year. 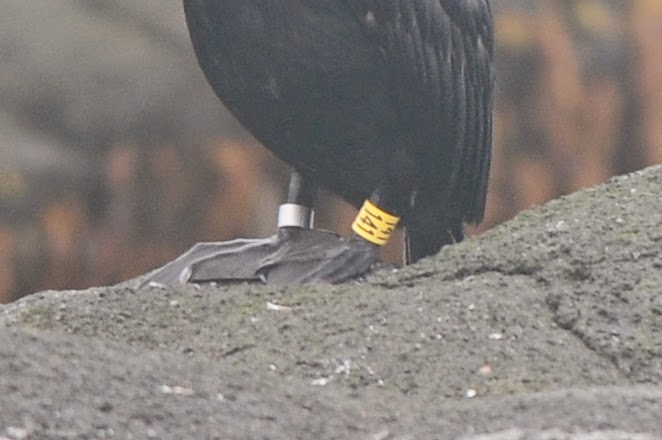 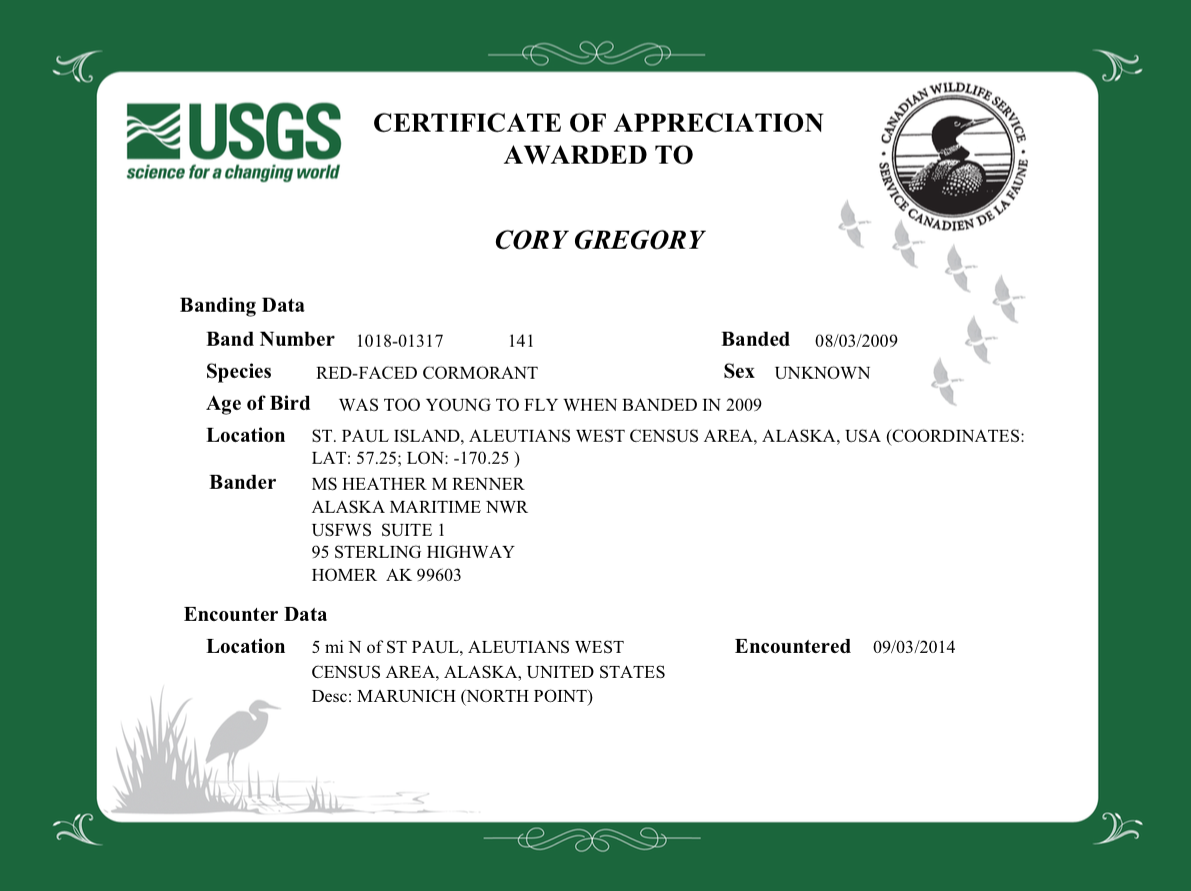 This bird was banded in 2009 as well and was 5 years old when I resighted it.

So there you have it.  I, for one, really enjoy submitting these resighting data and getting to see how old these birds were and where they were banded.  Speaking of this topic, I'll likely post soon regarding Cackling Geese and some resighting I've done this fall.  Until then, stay observant.
Posted by Cory J. Gregory at 12/20/2014 10:26:00 AM