I've tried to keep myself busy locally and that naturally means taking pictures of the CEDAR WAXWING flock that visits the yard every day.  Here's one with a mouthful: 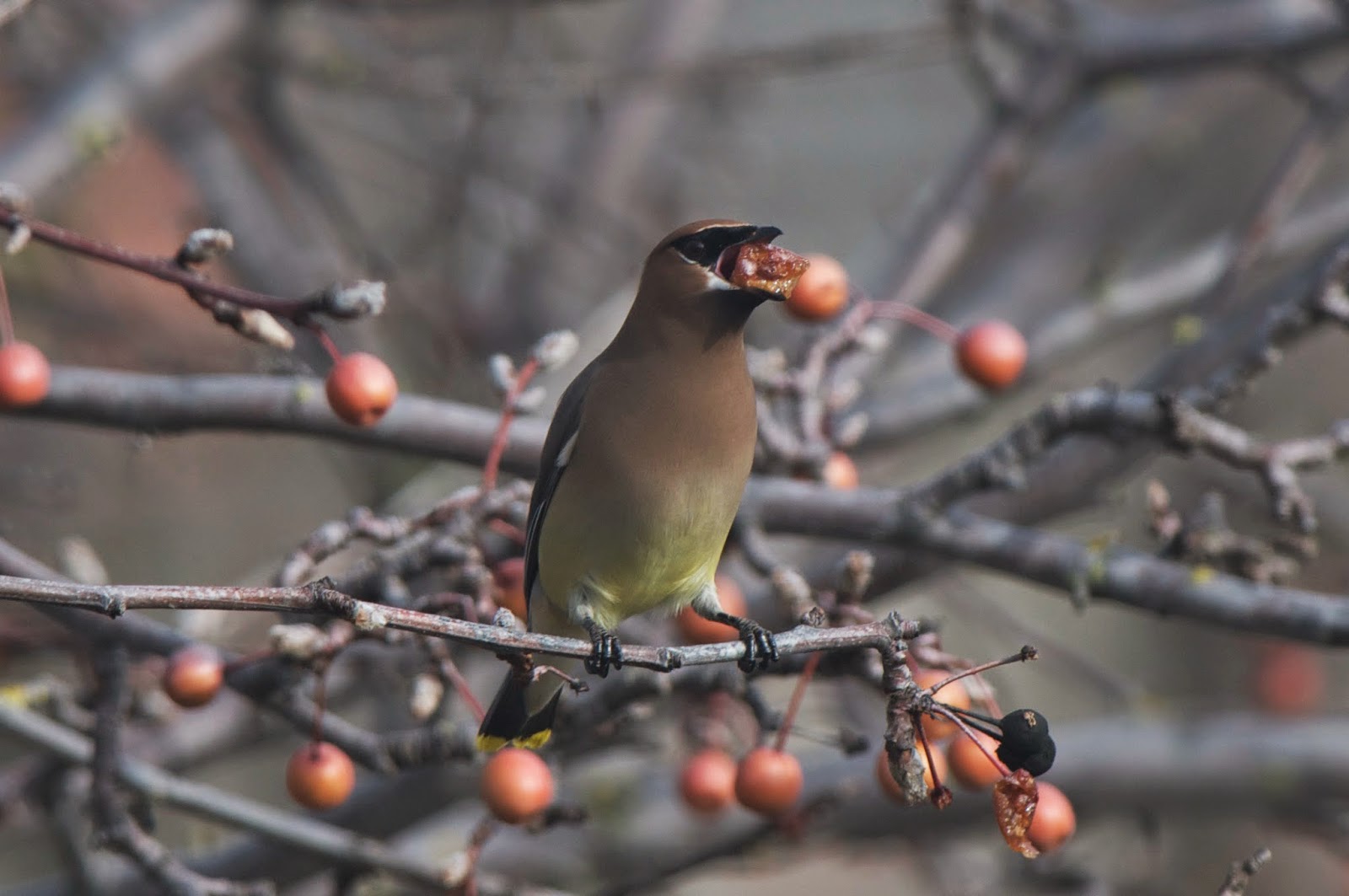 In the afternoons, the light is at my back but they're not the tamest of birds so this is the best I could do: 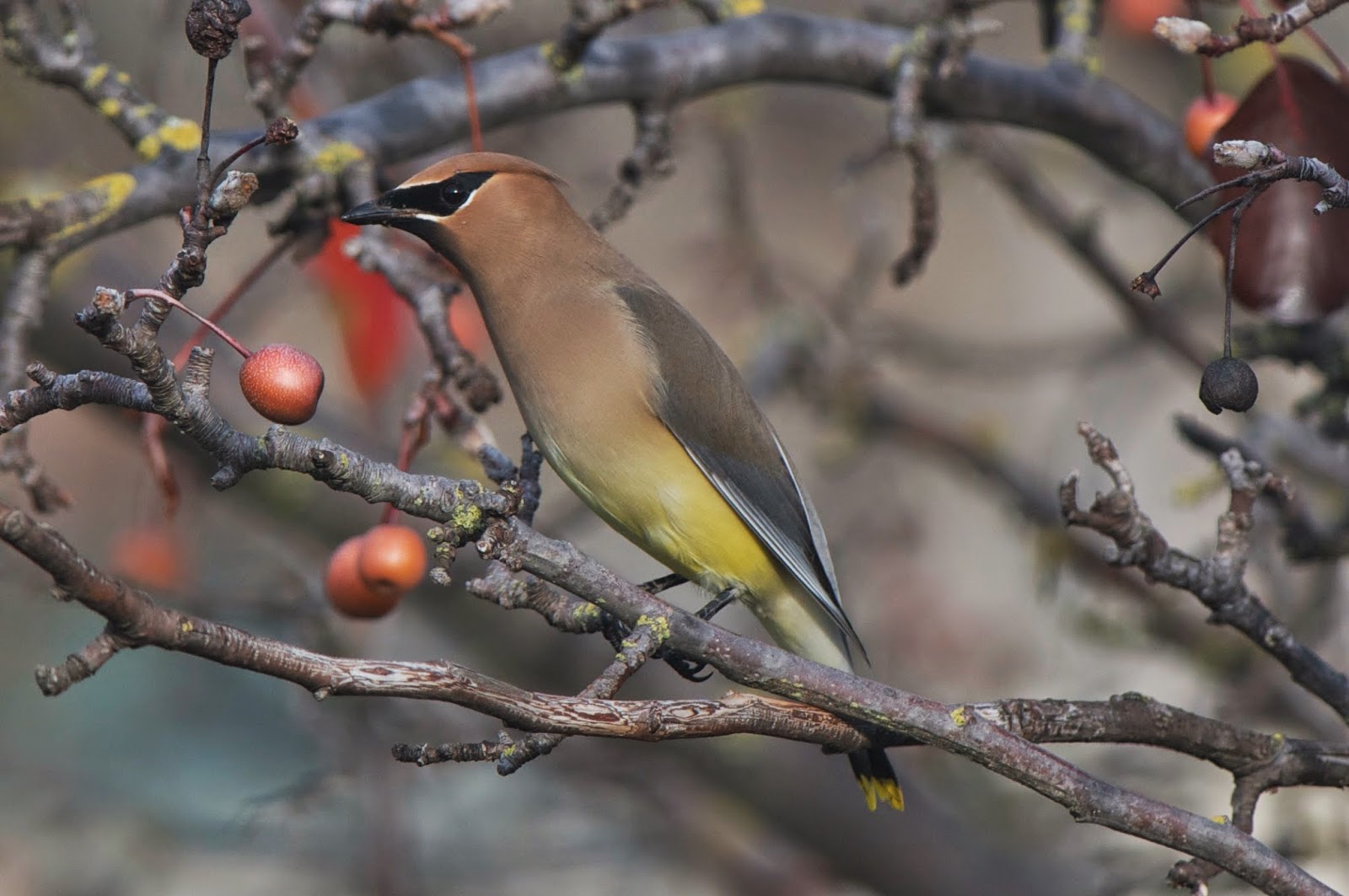 I've also spun down to Staten Island in San Joaquin County twice in the past week hoping for the flock of CACKLING GEESE to be scopable.  They haven't been.  The tule fog has wreaked havoc and the entire island was entirely socked in (that's what happens because the levee-surrounded island actually sits below sealevel).  One of the only birds I saw on my last visit were these SANDHILL CRANES.  You might be thrilled to see these but you have to understand that they're abundant here and I essentially no longer pay attention to these omnipresent, ag field grazers: 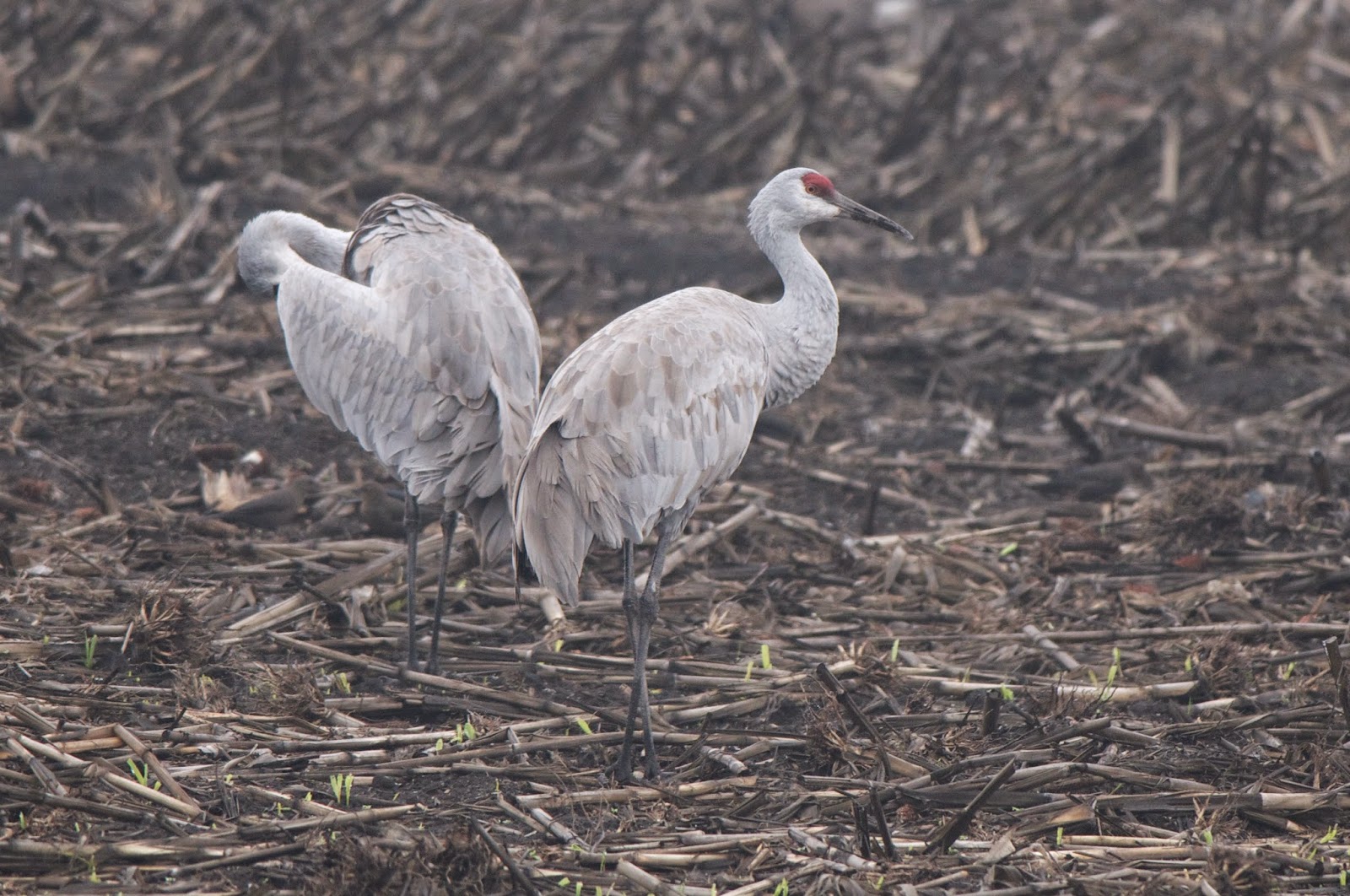 On a different day, I had the urge for some forest birding and so headed down to Cosumnes River Preserve which has a little bit of everything.  I started by leisurely walking the woods and saw things like a variety of sparrows, a Black-throated Gray Warbler, a "Myrtle" Yellow-rumped Warbler, several Wrentits, more than a dozen Ruby-crowned Kinglets, 3 species of wrens, 4 species of woodpeckers, etc.

By the time I was done with the woods, I figured I should scope some wetlands there to up my checklist count.  I added things like 9 species of dabbling ducks, hundreds of geese, 7 species of shorebirds, and a bonus Virginia Rail.  I also snapped a picture of this GREATER YELLOWLEGS despite it being a very cloudy and overcast day: 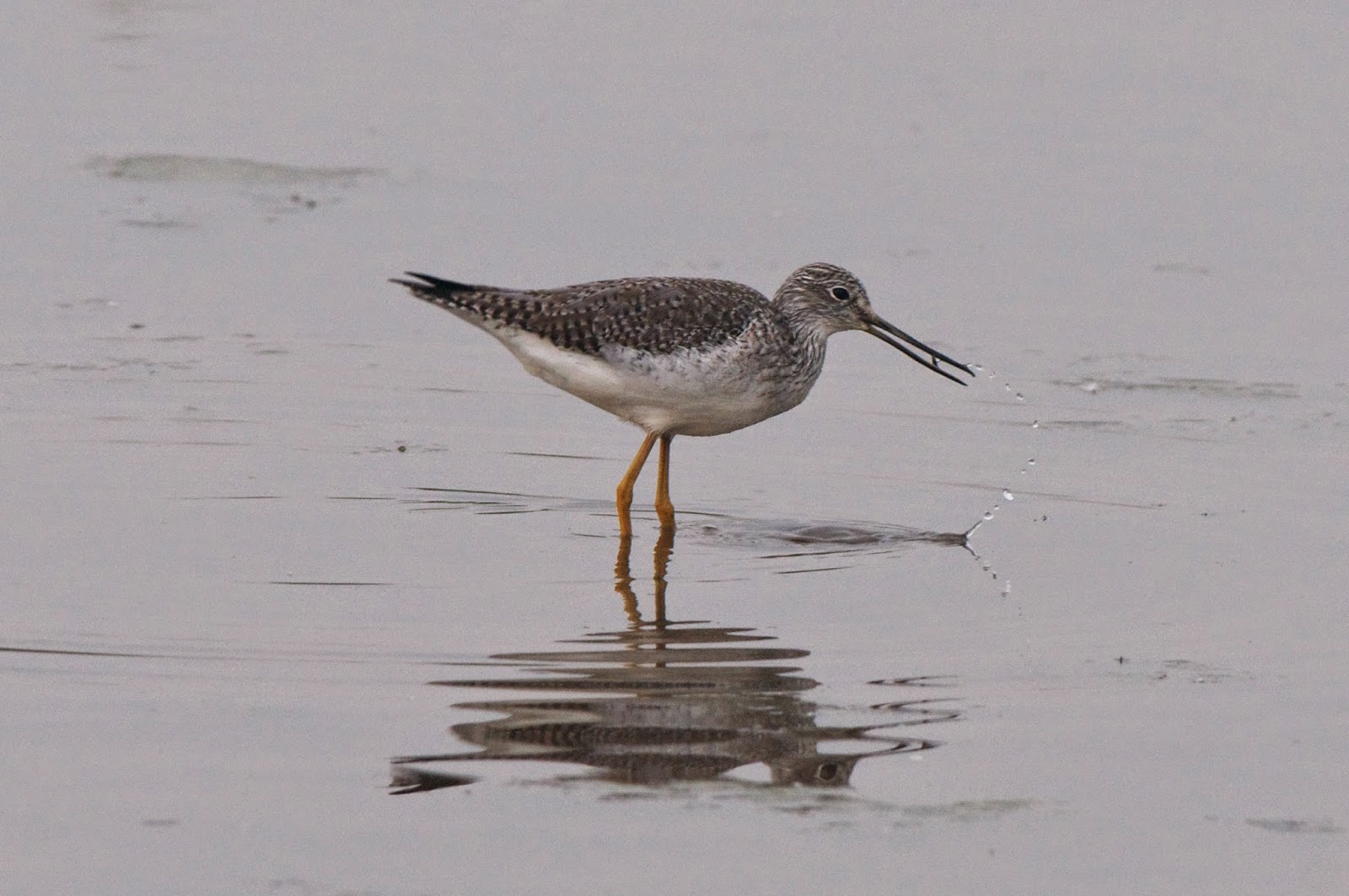 I ended that CRP checklist with 76 species after about 3 hours of birding.  You can see the full checklist here.
Most recently, I had the urge to get out of town and see some different country (and maybe a different bird too).  I aimed north for Tehama County where there has been a NORTHERN SHRIKE for the last 12 days or so.  This would be a state bird for me although, I admit, I care very little about my CA state list.  Although the chase led me about 2 hours from where I lived, I didn't mind the quick zoom up I-5 into an unfamiliar county.

I pulled in and literally the first bird I saw was the shrike on the fence next to my car.  It flew across the road to the one-and-only oak.  Here's a distant documentation pic: 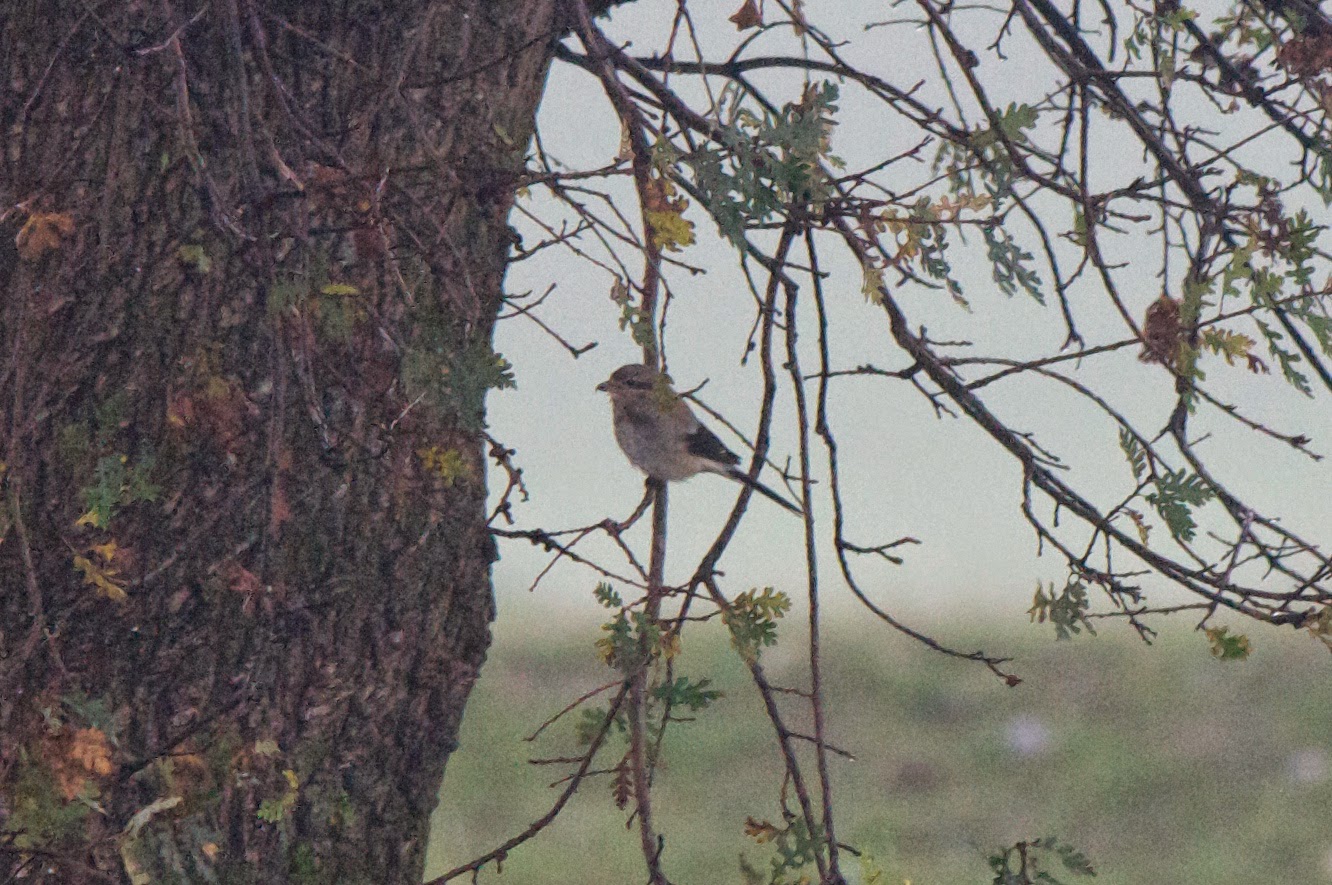 Then I noticed a sheriff had pulled in behind me.  He got out, walked up to my car cautiously, and wanted to chat:

Sheriff:  Sir, what are you doing?
Me:  Oh, just doing a bit of bird-watching.
Sheriff:  You're the second one I've seen bird-watching.
Me:  Ah, that makes sense, there is a rare bird called a Northern Shrike that's been frequenting this stretch of road and I know other birders have come to take a look.
Sheriff:  Hmm, well, this road leads to Rancho Tehama which has a lot of shady stuff going on; it's probably the pot capital of the state.
Me:  Oh, I had no idea, I'm not from around here, I'm from Elk Grove down by Sacramento.
Sheriff:  Well, this stuff might not be as bad as things in Elk Grove but either way, do you have your driver's license?
Me:  Sure.
-I hand him my DL-
-Sheriff, via radio, rambles off my number to a dispatcher-
Sheriff:  That's a nice camera, how much did you pay for it?
Me:  About a couple thousand.
Sheriff:  -with eyes bulging-  Really?  Oh, you know, I saw a Bald Eagle once on Hwy 37, you know where that is?  It would have been the best picture in the world if I had a camera like that.
Me:  Oooh, cool.
-radio crackles-
Female radio voice:  Record shows a Cory Gregory, 31 year old male, resides in Elk Grove, record clean.
Sheriff:  Alright then, I'll leave you to it.

I took a couple more pictures and took off.