The FALCATED DUCK (Anas falcata) is an Asian dabbler species.  Of course, one way to stir things up in the birding world is to find one of these Code 4 rarities here in North America.  That happened on December 8, 2011 when one was found at Colusa NWR in Colusa County, California.  The morning after it was reported, I was there... along with hoards and hoards of other people that had the same idea.  In fact, some people had to resort to standing on the railing/back benches in order to see over the crowd (I didn't see any tax collectors climbing sycamore fig trees though).

Although I saw it that morning, the bird was quite distant and photos were a joke.  Can you even pick it out in this picture? 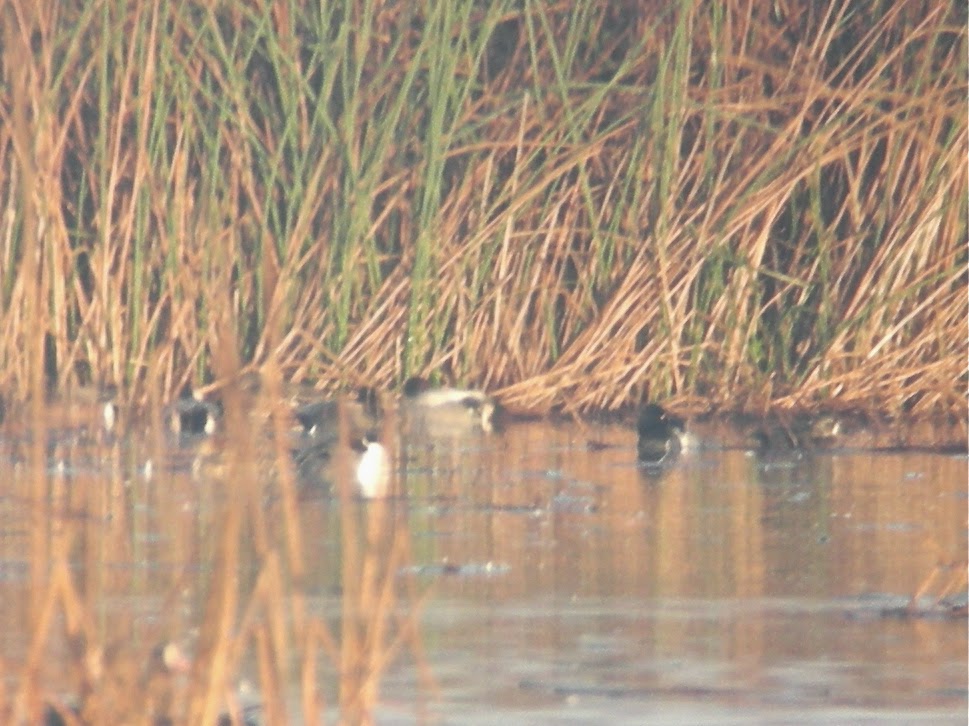 The duck hung around though.  Ok, I'm cool with that.  I returned more than a month later to take a better look at it: 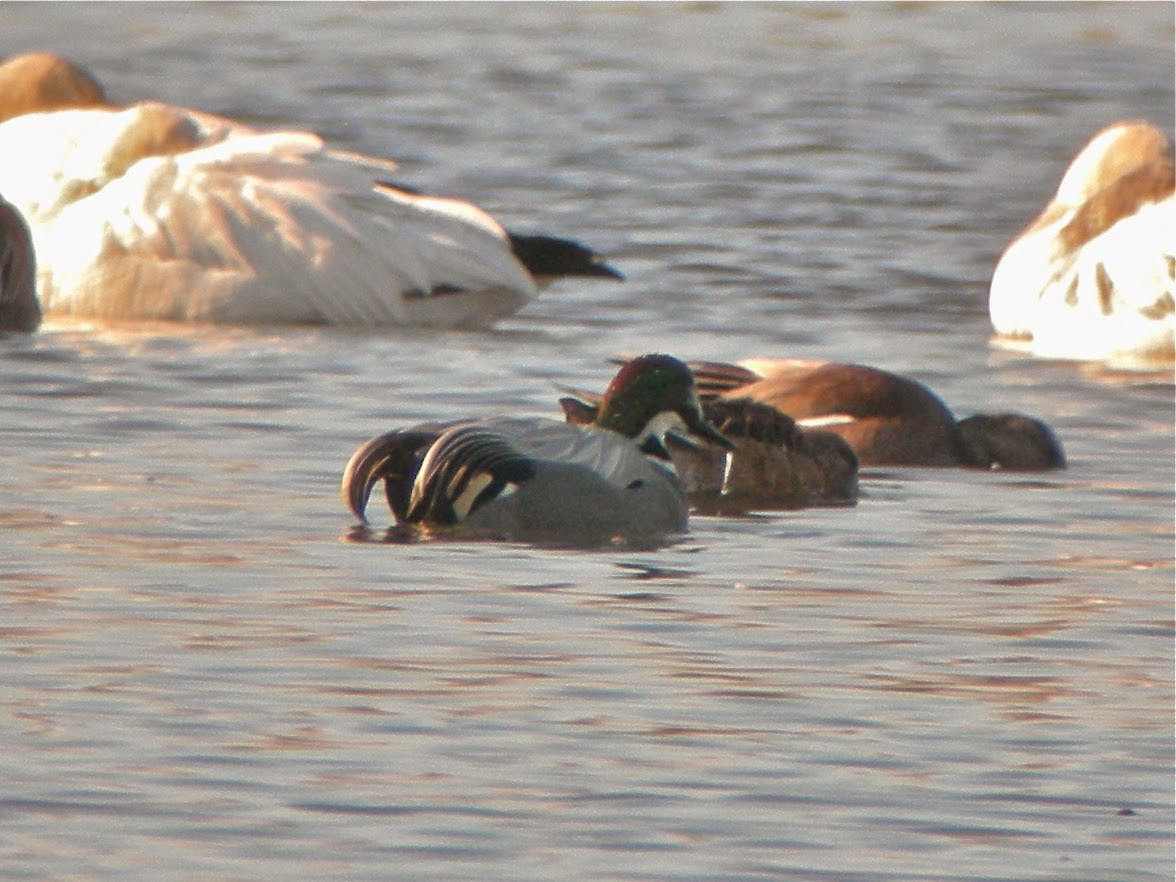 I might point out here, after you look at the crazy tertials on this bird, that falcate means "sickle-shaped".  The name makes sense now, right?

So that was it.  A really rare duck hung out for a winter.  And then... December 2012.  It was back.  It survived the summer, where ever it went, and returned to the exact same pond at Colusa NWR.  Birders rushed there again.  People who hadn't seen it the first winter now had another chance.  I eventually spun up to see the bird again (Colusa NWR is only a short hour drive).  It was a gloomy day but the scope views of the bird were great.  Here's a photo from that day: 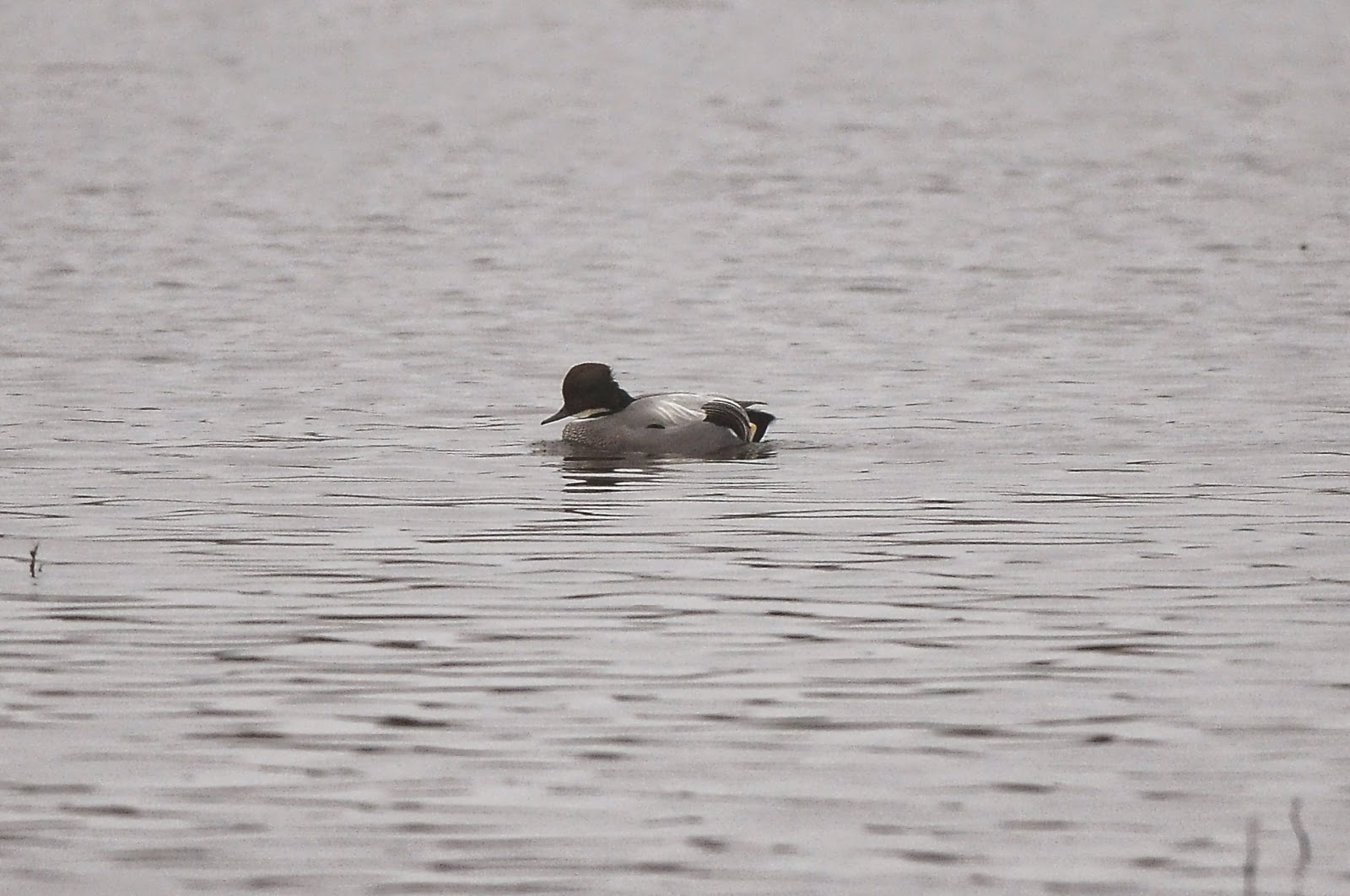 So, it hung around for a while, like a month, and then went missing.  Where did it go?  Would it be back?  Fast forward a year and many people probably had a hunch that the bird would return for a third winter.  Problem is, it didn't.  At least, no one saw it even a single time that winter.  Ahh, that was it.  Finally.  If you hadn't seen the bird yet, you lost your chance.  And then... October 2014.  It was back for a third winter.

I figured I'd go and take another look.  Why not?  After all, it's a Code 4 rarity almost in my backyard (ummm, no, not even close).  I tried for it.  No luck.  Tried again.  No luck.  Tried a third time.  Still no luck.  Ok, what's the deal?  Then an eBird report came in saying it was seen AWAY from the viewing platform, this time along Highway 20.  Whhaa?  Really?  I hadn't heard of this bird being seen away from that platform ever before (or maybe I missed it in previous years?).  Either way, Mr. Dettling also found it at the new alternate spot just a few days ago.  Things were looking good.  It was time for a fourth attempt.

I arrived at the described pull off, set up my scope, and promptly found it after about 5 minutes of looking.  Granted, it WAS distant and WAS sleeping the majority of the time but I really couldn't complain.  Here's a digiscoped picture of the bird sleeping on a distant dike: 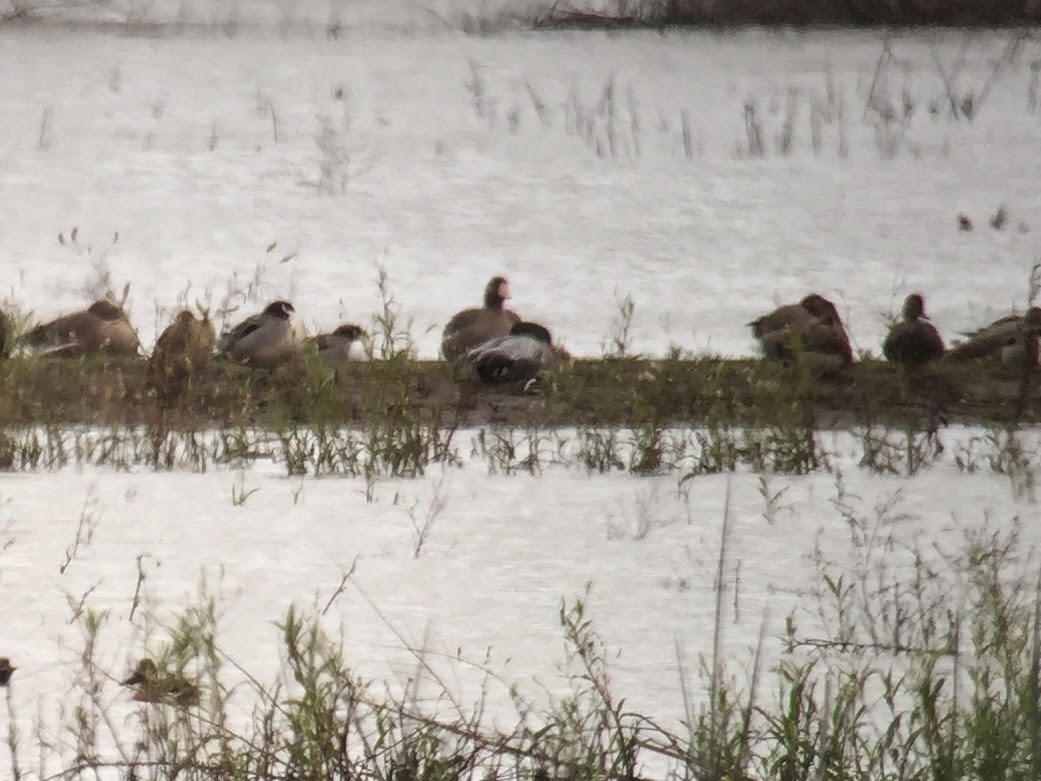 The spot is pretty easy to get to.  As you approach Colusa NWR via Highway 20 from the west, there is a very large pull off on the south side of the road exactly 0.8 miles west of the main NWR entrance road.  At that pull off, there is a green gate crossing a levee (no, this gate isn't for climbing).  As you look south down the dike, there is another dike stretching west from the north-south dike.  The bird was sleeping there when I found it.  Here's a map:

Here's a picture showing the general area.  You can see the gate, the dike that stretches to the south, etc. 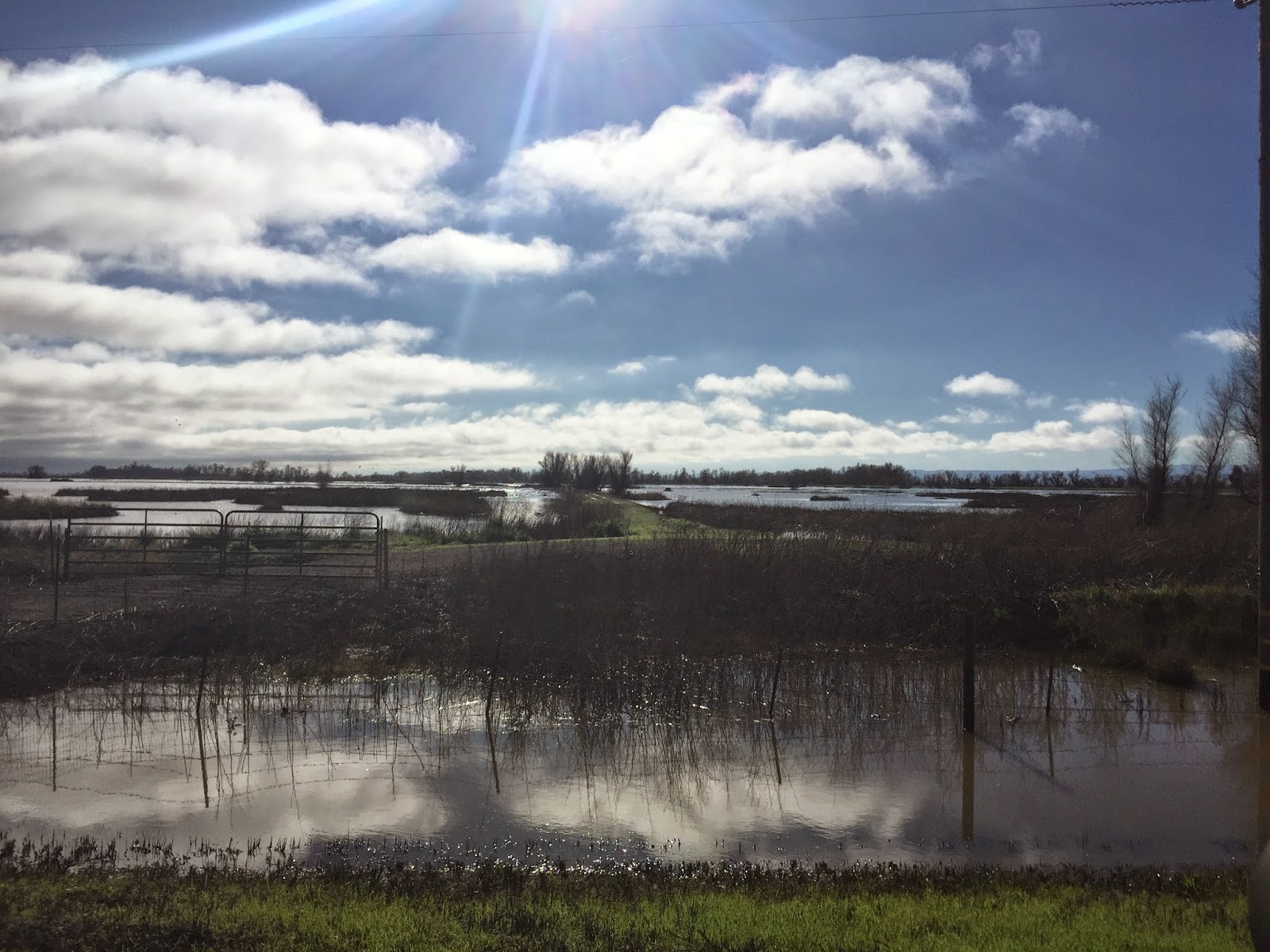 Oh, and there's a ton to look at besides the Falcated.  You can expect 4-5 species of geese with numbers probably in the 5 or 6-digit realm.  You'll also see just about every expected duck species possible including multiple EURASIAN WIGEONS as well.  Here's my checklist.

Here are some ROSS'S GEESE with some SNOW GEESE: 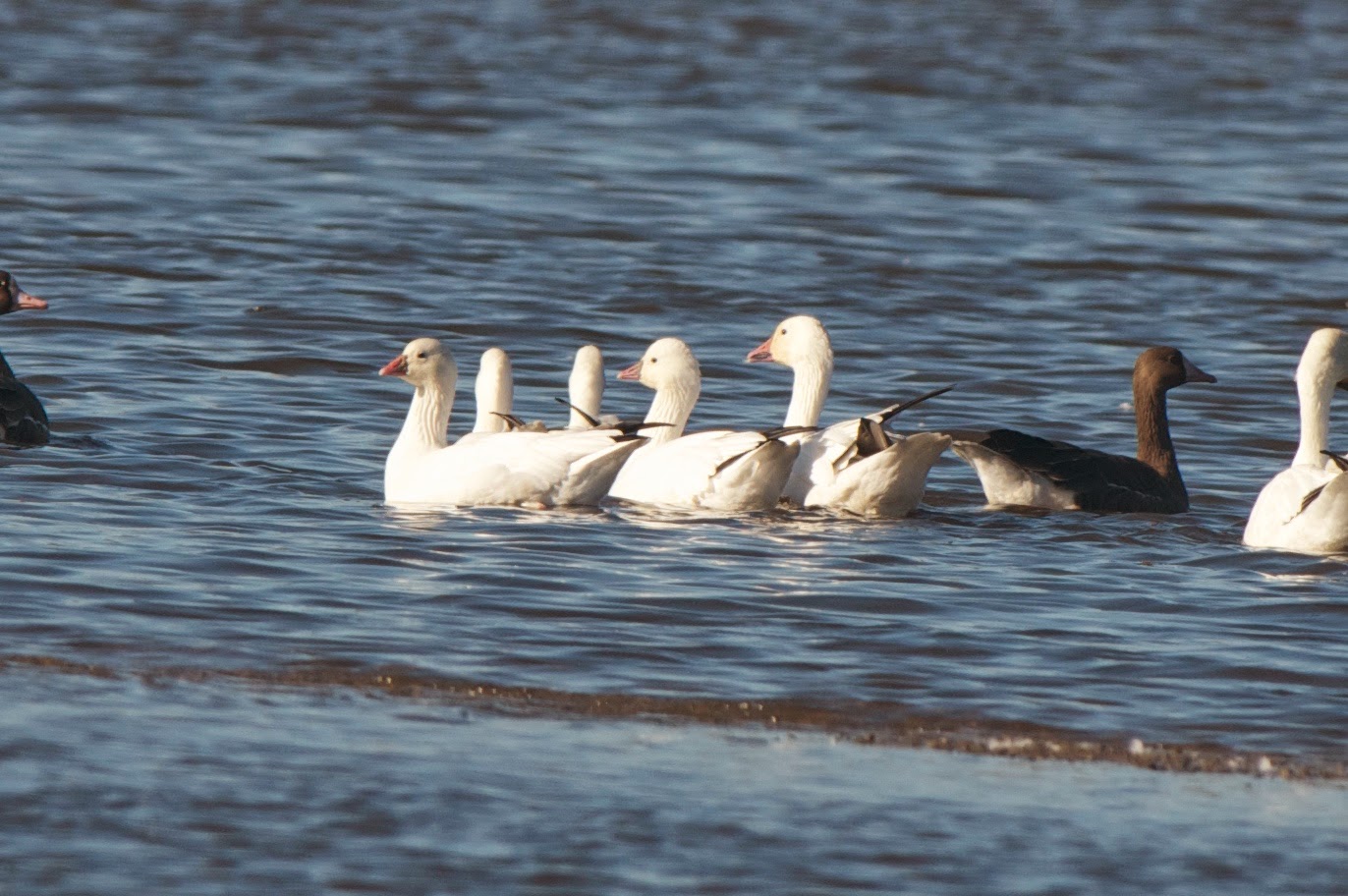 There might be one or two tame egrets around as well: 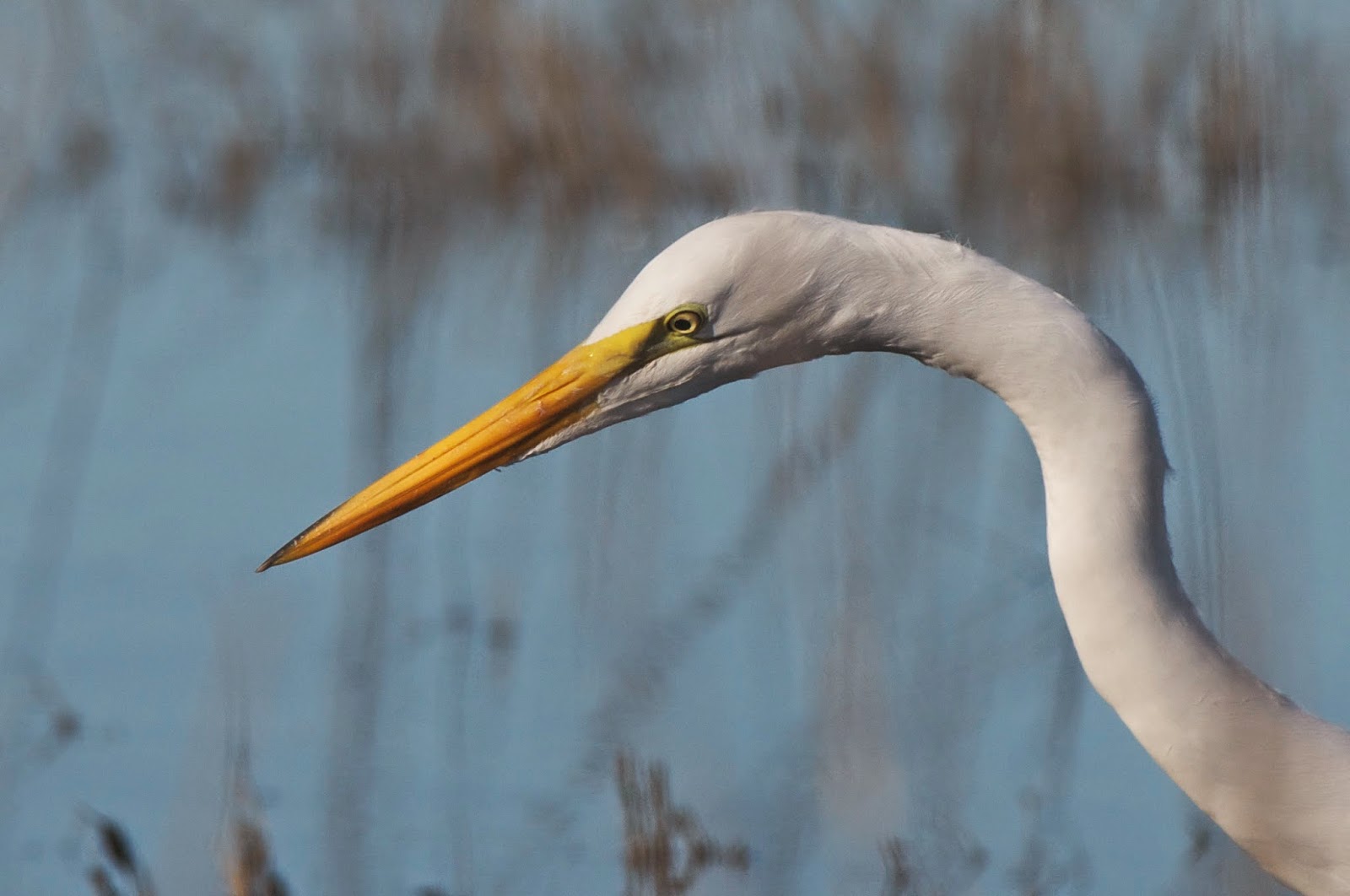