Although it's been a week since my last post, I don't have a ton of news or pictures to share.  As I continue to bird locally, I continue to slowly get bored with what I'm seeing at my local patches.  Rather inevitable, I'm afraid.

However, I've still visited a few local parks lately.  For example, I scoped the ducks at Cosumnes River Preserve (checklist here) on the south side of Sacramento County hoping for a Redhead (which would be a county year bird).  No dice with the target, but in the meantime, plenty of the usual suspects were around.  Here's a picture showing one of the many wetlands; how many species of ducks do you see? 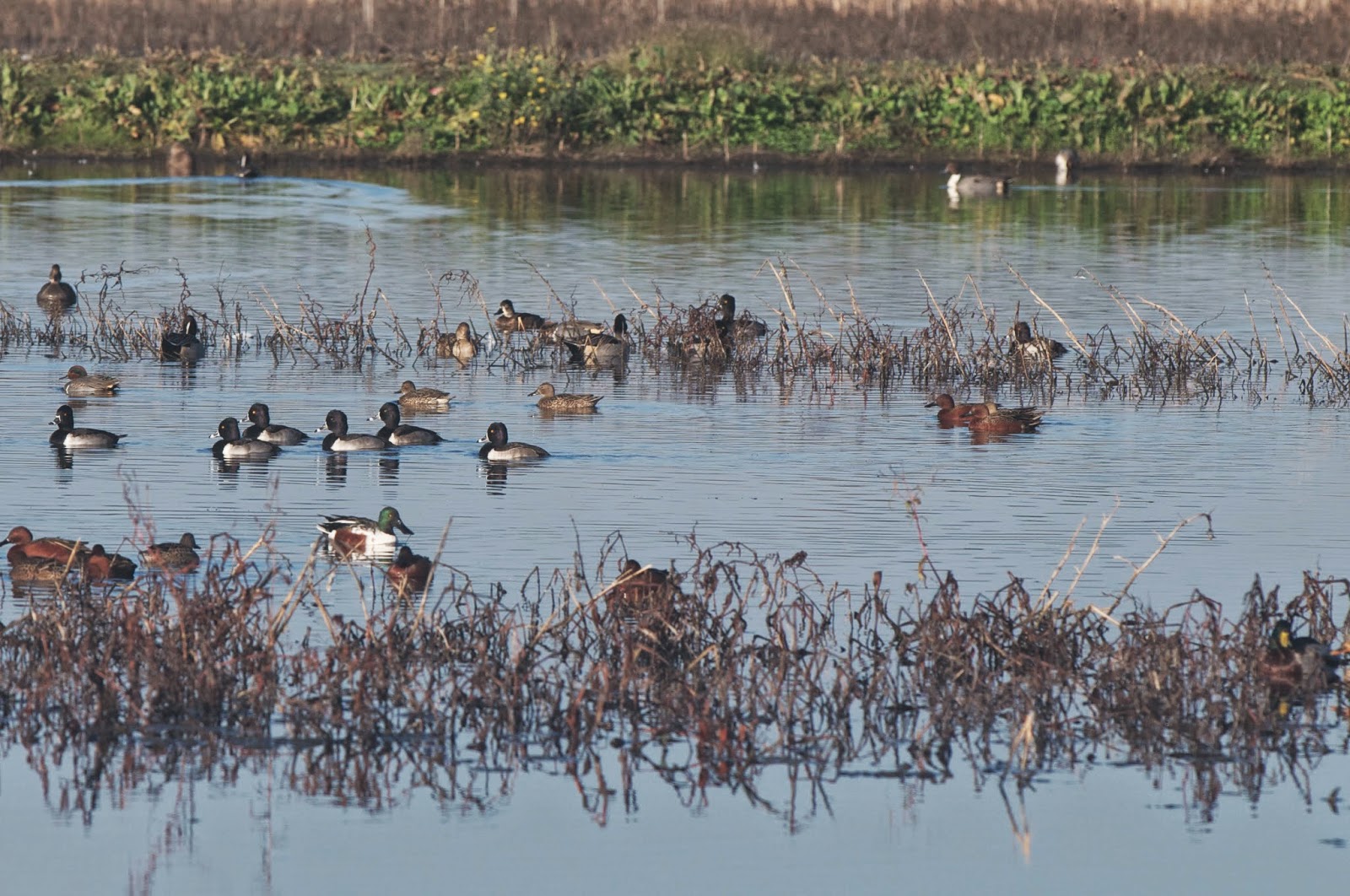 I attached my digiscoping adaptor to my phone for this picture.  Do you know what species it is? 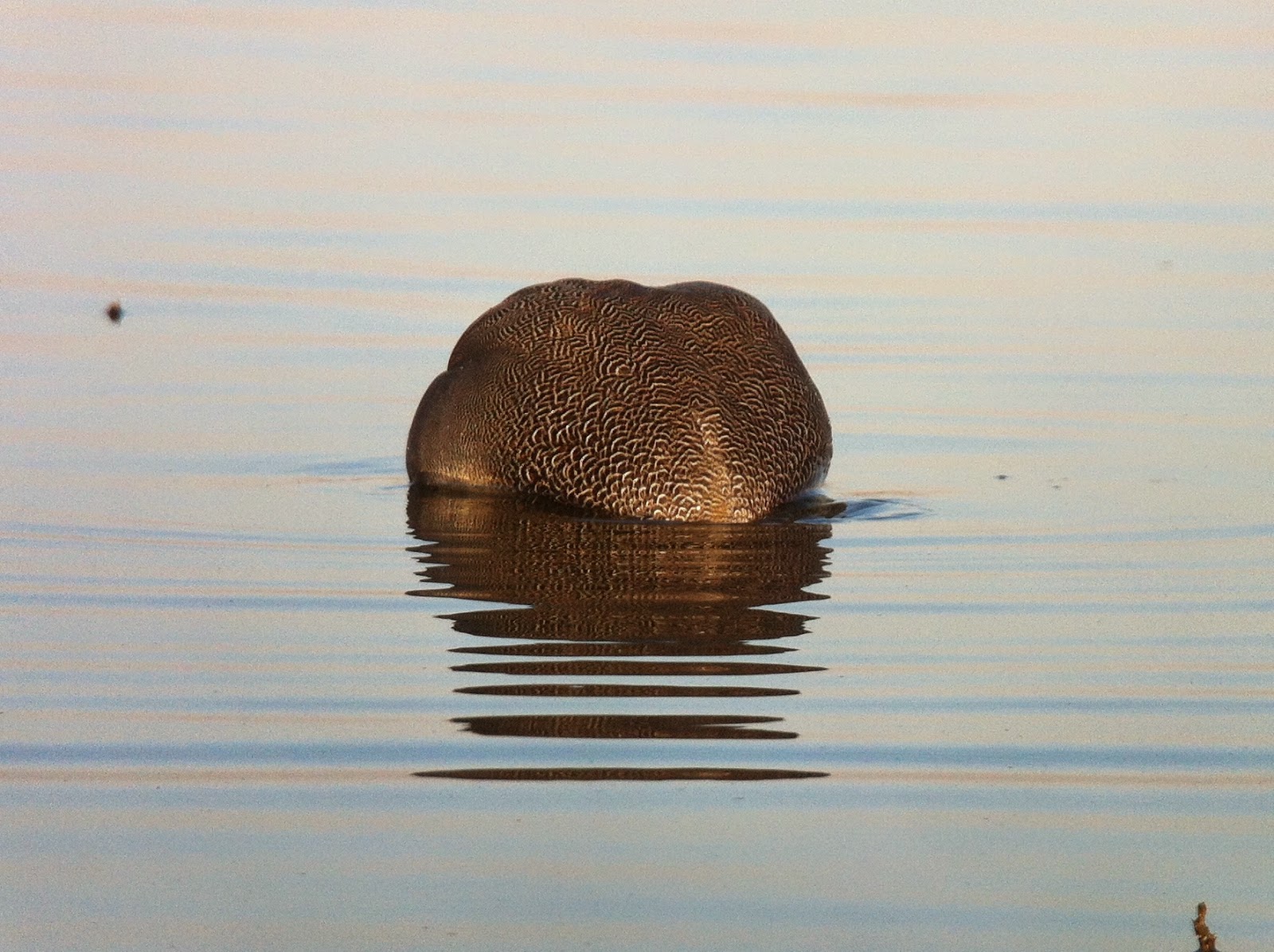 There were several species of diving ducks in these shallow-ish ponds too including these female COMMON GOLDENEYES: 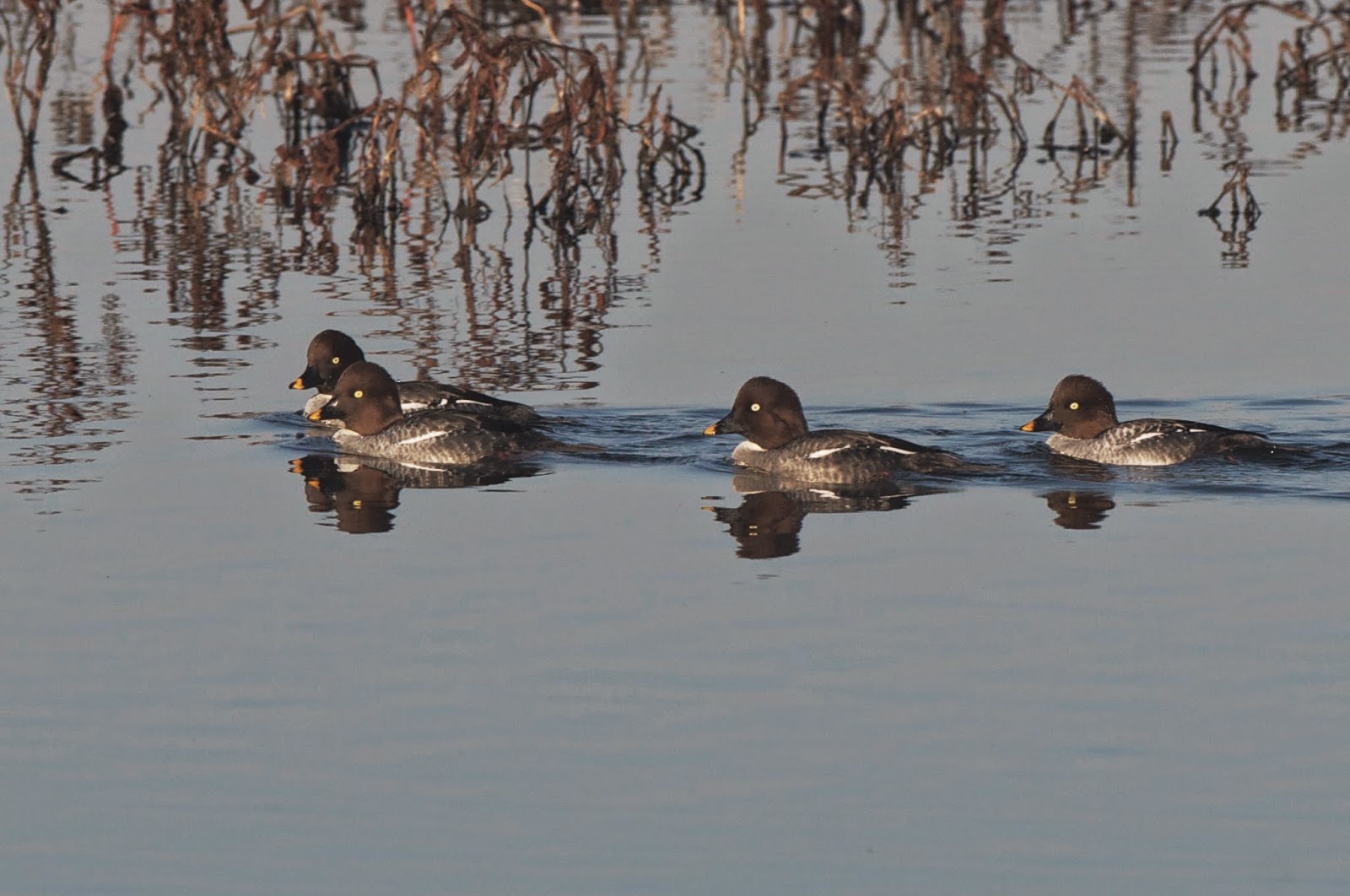 These two male BUFFLEHEAD were pretty vivid with the morning light at my back: 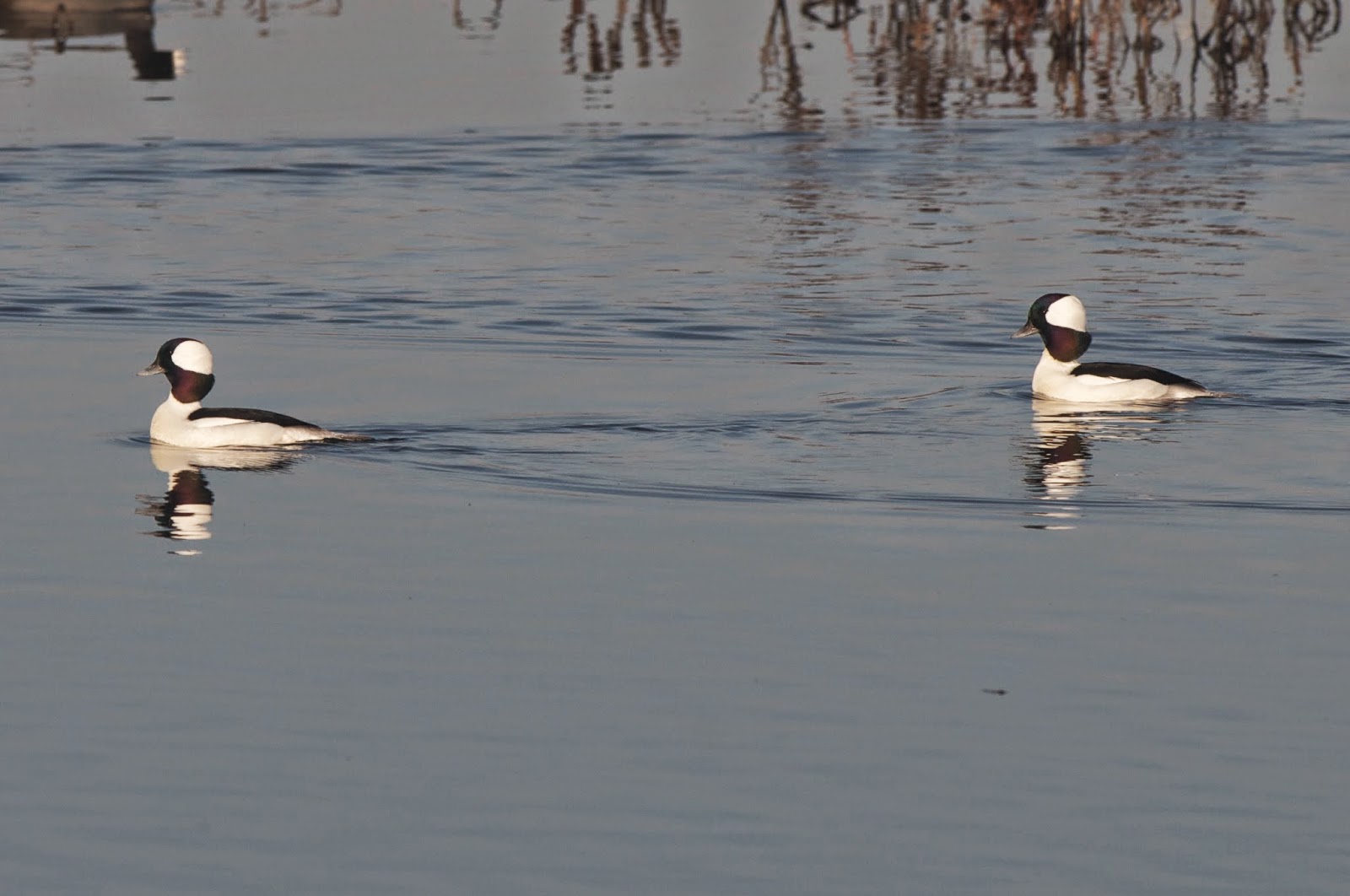 In answer to the mystery bird above, it's a male GADWALL with its amazing, intricately-patterned breast/back feathers: 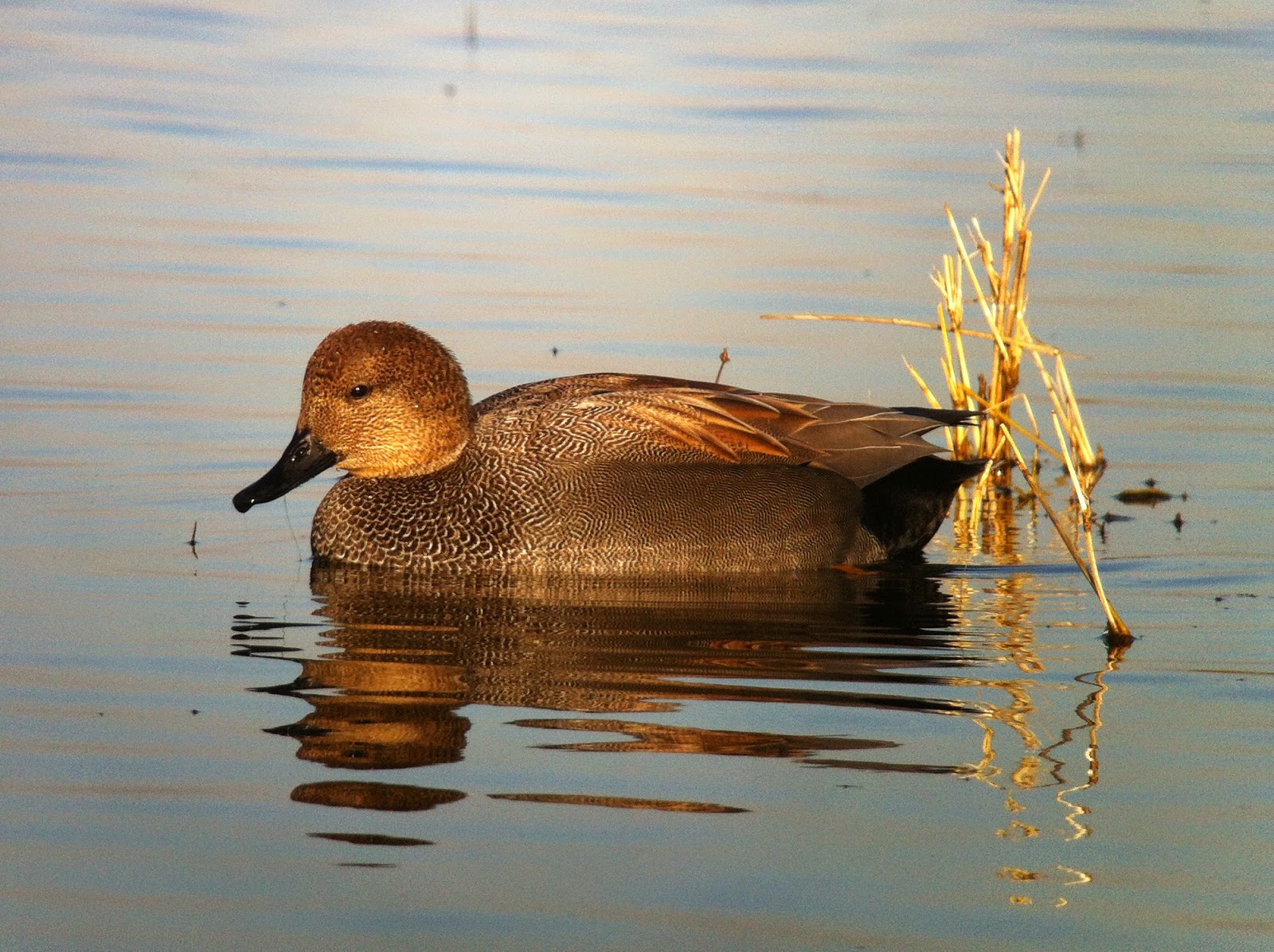 In regards to the first photo in this post, I'm confident there are 7 species of ducks shown:

Also at CRP, this TURKEY VULTURE is going to get a rude awakening when the train comes and the barrier it chose for its perch drops from underneath it: 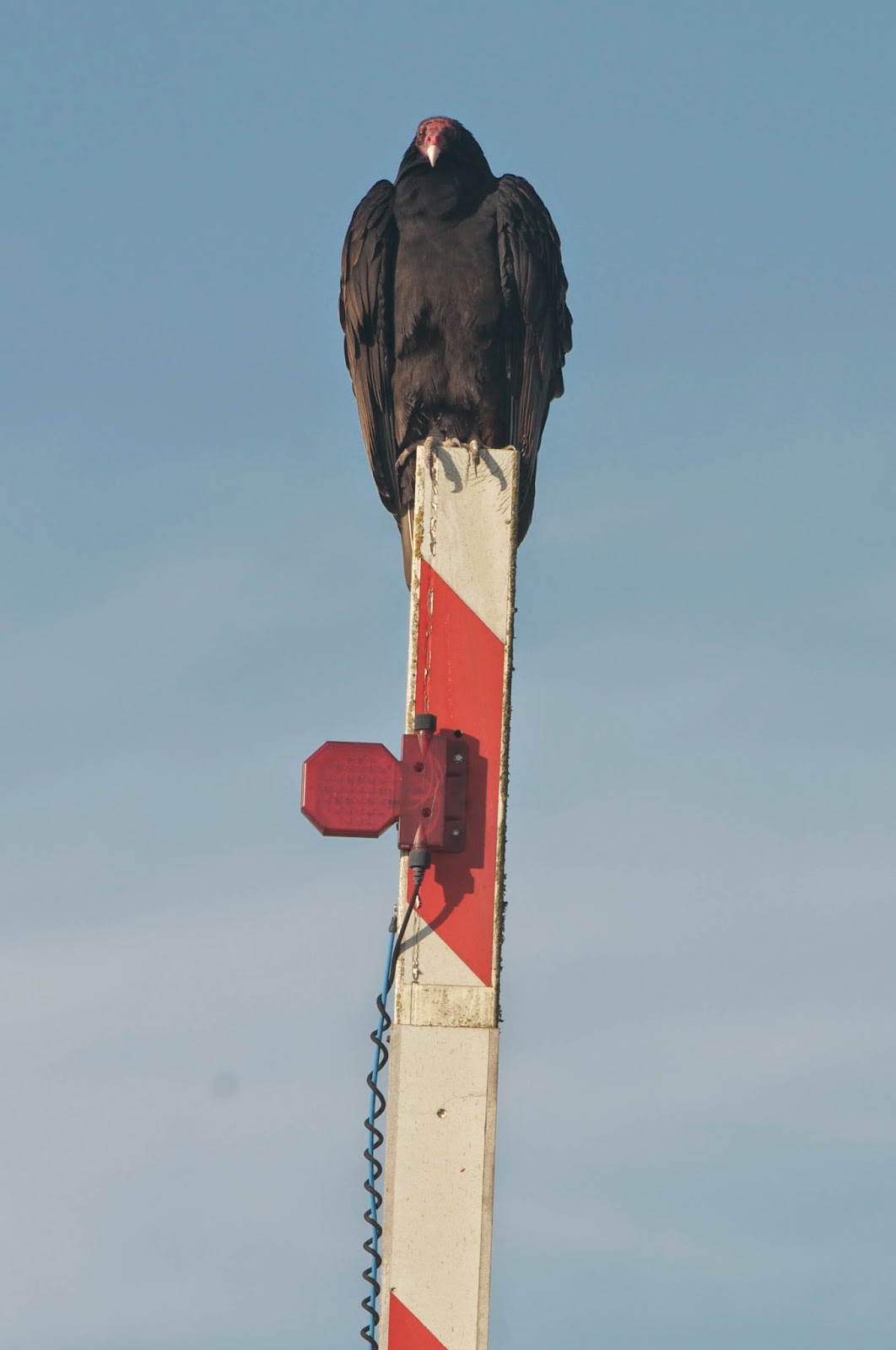 At a different local patch, Camden Park (checklist here), we stumbled into a couple of mildly interesting birds.  First was this CACKLING GOOSE Ashley spotted mixed in with the regular CANADA GOOSE flock: 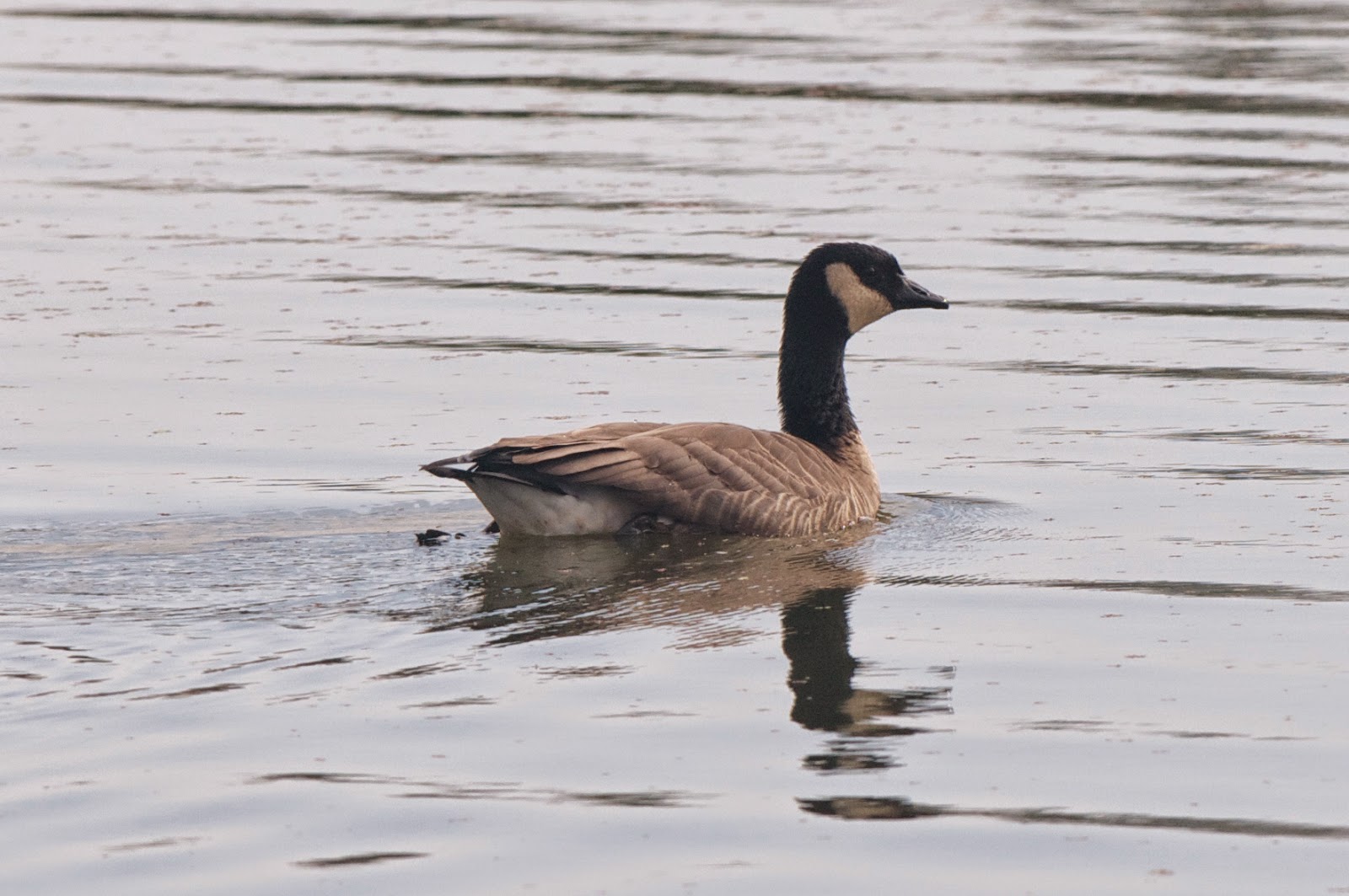 When compared to the larger CANADA GOOSE (on the left), you can see how small and dark-breasted this particular goose is: 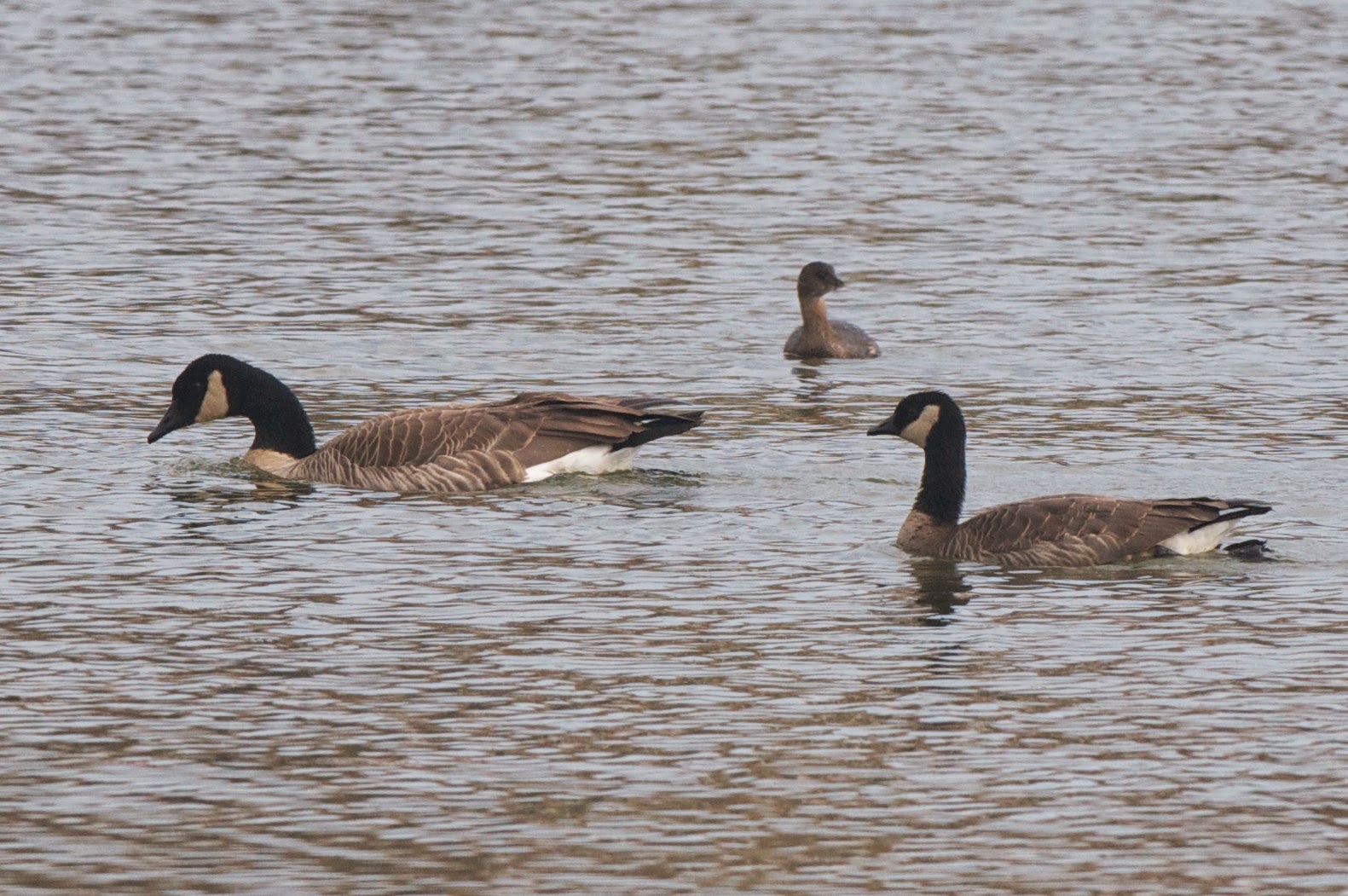 Typically here in the Central Valley, we only have two races of CACKLING GOOSE; leucopareia which is the Aleutian race, and minima which is even smaller and darker.   As far as I know, there have only been 1-2 instances of someone claiming taverneri ("Taverner's") in this part of the valley.  The eastern race, hutchinsii ("Richardson's"), is even rarer and is much less likely than any of the others.  Has there ever been a "Richardson's" in northern California?  eBird doesn't show a single record.

So, what subspecies is this thing?  Some folks suggested taverneri; personally, I think this bird's breast is distinctly darker and I would expect a Taverner's to be paler breasted.  Others suggested hutchinsii but I'm not seeing that either; I'd expect it to be paler breasted with probably a different head shape too.  I don't think it's minima because I'd expect it to be even smaller, darker breasted, with a smaller bill.  That leaves me with the most numerous subspecies in this part of the Central Valley, leucopareia.  I think most things on this goose are consistent with that subspecies.  Yes, most leucopareia have a white neck collar but young ones at this time of year often don't show that yet.  I wasn't able to get a clear look at the gular stripe (or lack thereof) but that's another fieldmark which may help out.  Here's one last shot of the goose.  Any ideas? 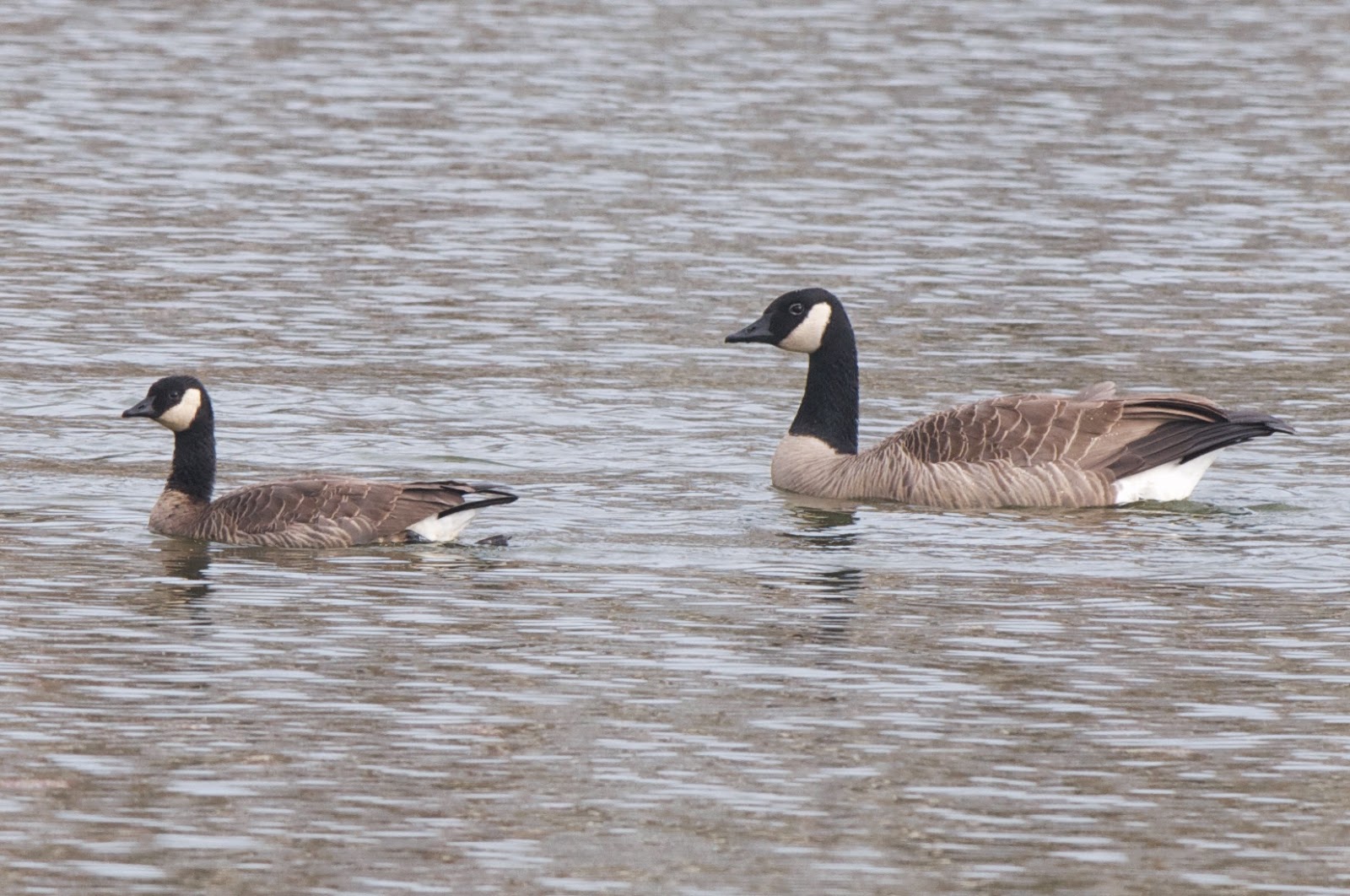 Maybe the biggest surprise for me at Camden Park was this male BARROW'S GOLDENEYE in the wetland: 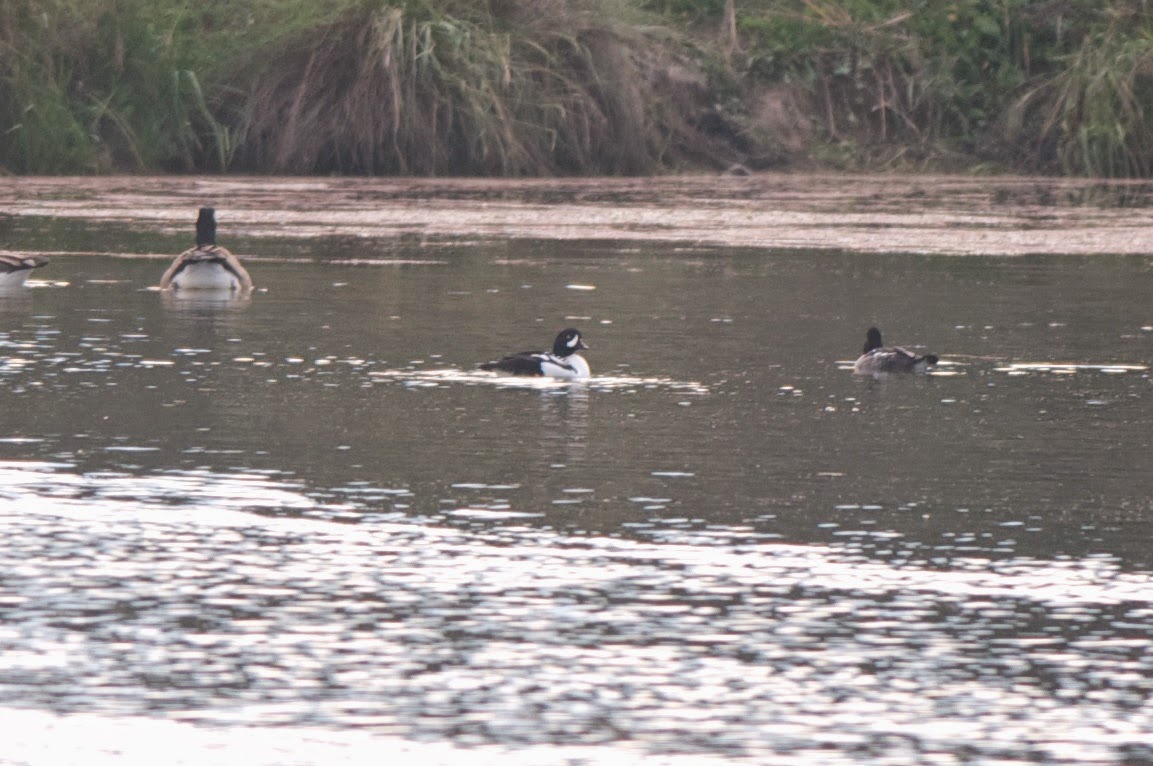 Although I've seen this species elsewhere in the county, I definitely hadn't seen one there before.  It was in the company of several COMMON GOLDENEYES too which is another species I had never seen there before.  Last but not least, there was a solo RING-NECKED DUCK present which was another new species for the local patch list.  With those additions, this local patch is approaching the 100 species milestone.

We ventured to a different cemetery in Sacramento a couple of days ago (checklist here) in hopes of finding a Red-breasted Nuthatch (would be a county year bird).  No dice.  But it was fun being around multiple BROWN CREEPERS, VARIED THRUSHES, etc.  This gingko tree was rather bright as well: 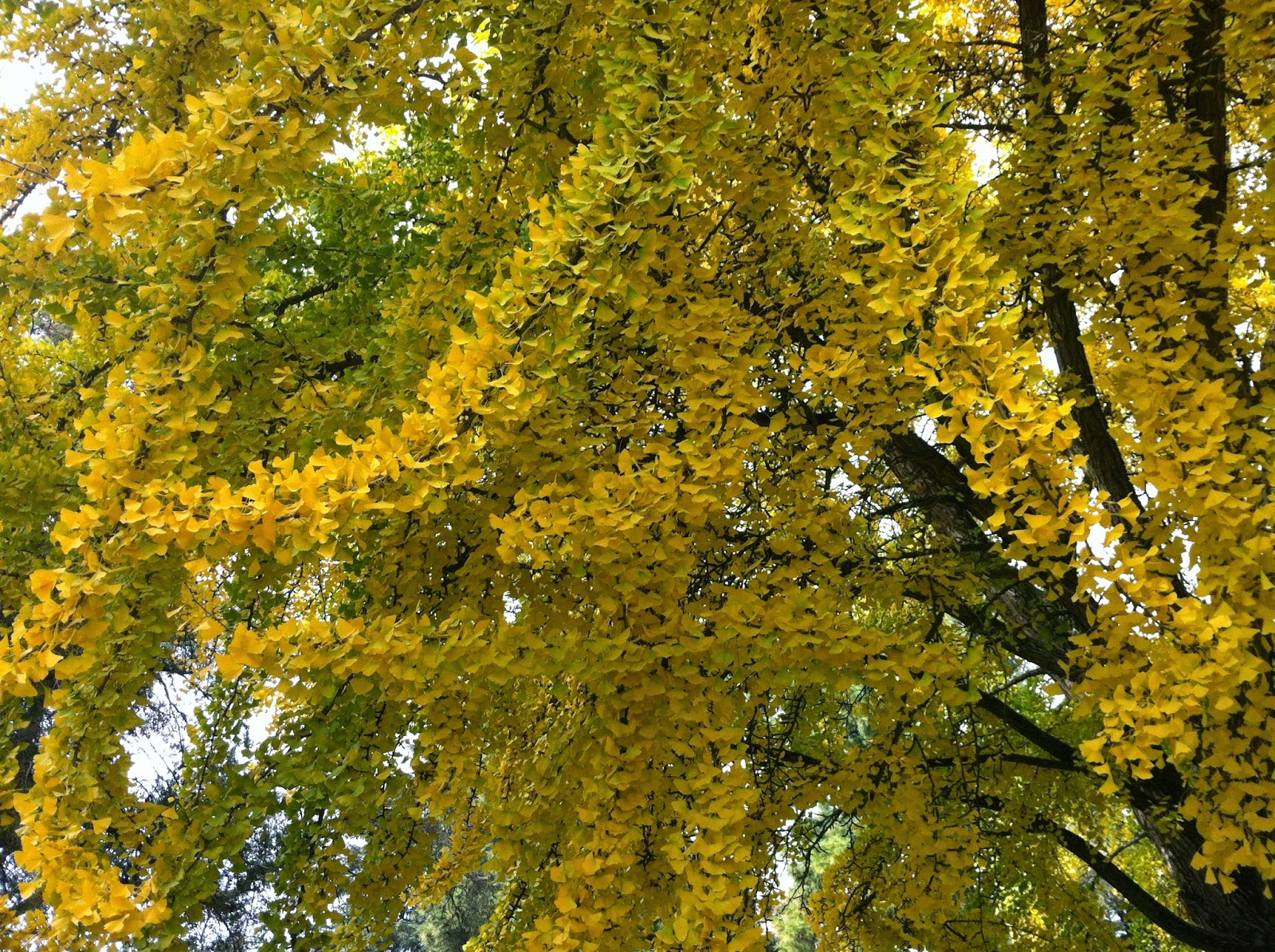 We finally needed a change of scenery this past weekend and decided to stab westward and bird in one of the counties towards the bay, Solano County.  We targeted a couple of spots that we had never been to before, one being the Benicia Pier (checklist here).  This was a cool spot because it's close enough to the bay area that we had ~700 SURF SCOTERS, multiple PELAGIC CORMORANTS, and shorebirds like WILLETS.  If you go farther inland in that county, you'll lose those species immediately.  Overall, I ended up snagging 11 county life birds (166 total) and 14 county year birds (139 total).  Overall, it was fun seeing new territory and enjoyable to actually be able to find new year birds when we wanted to!

Last but not least, and as you've already assumed, I've been paying attention to what's been in my yard as well.  In fact, as I type this, there is a flock of AMERICAN WHITE PELICANS soaring leisurely overhead.  Although this is the 23rd time I've seen that species from my yard, it's still fun to see such big and striking birds in the neighborhood.  I had a GREAT BLUE HERON flyover this morning as well which represents only the 5th record for the yard.  I did get a surprise a couple of days ago when this MERLIN was circling overhead.  This represents the 4th record of this species from the yard: 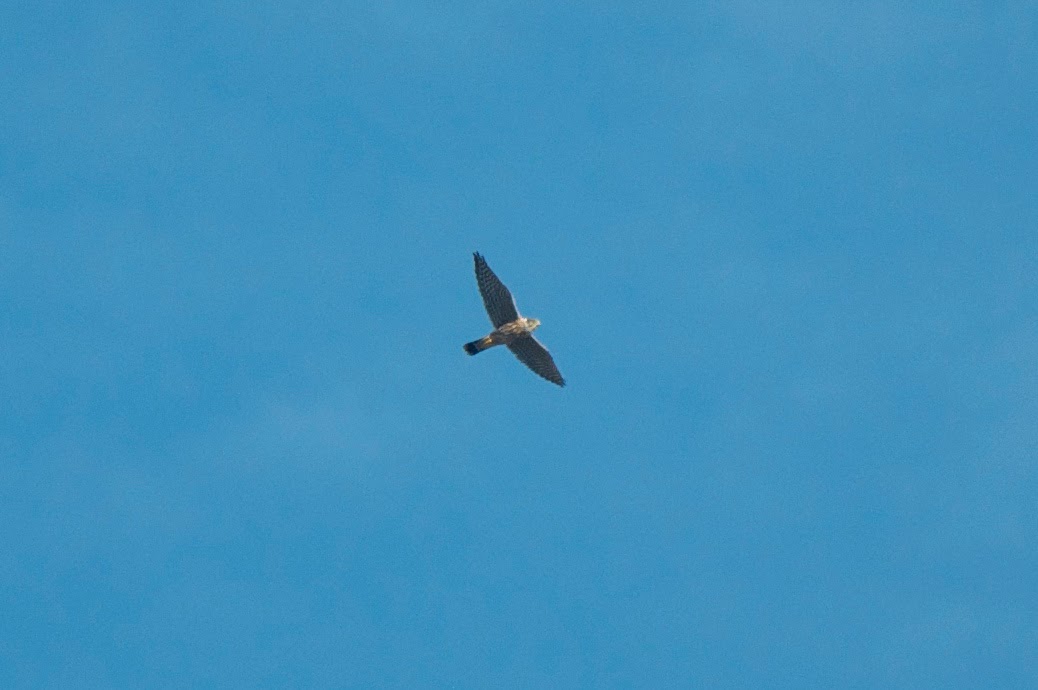