When the rosefinch was found more than a week ago, you can imagine the scramble all of the birders undertook to get onsite ASAP.  As you can see below, you know something worthwhile is afoot when all of our vehicles are at one place (other than where we live): 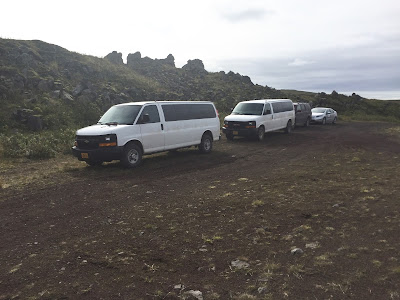 And understandably, we've been birding the quarry every single day since the Pallas's Rosefinch was found.  However, the bird has remained very elusive along the hard-to-reach ridge top and very few people have actually succeeded in relocating the bird.  As far as I know, it was last seen on the 24th and only in flight.

However, the "Patagonia Roadside Rest" effect went into action when Alison and her group found a RED-FLANKED BLUETAIL (Code 4) while searching for the rosefinch!  However, the bird was a one-and-done wonder and no one was ever able to relocate it.

Despite those birds being less than reliable, we've had some other fun birds around like this ARCTIC WARBLER in Zap Ravine for a couple of days, the first one of the season.  As is typical for this species in migration here, it was quite skulky and rarely came out in the open.  This is the best I could do: 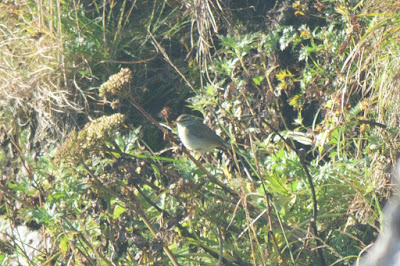 We continue to have large numbers of redpolls on the island.  We've seen a flock of 100+ birds once or twice which is the largest I had ever seen here.  And believe it or not, not all of the redpolls on the island have found their way to that flock yet; here's one in the quarry crab pots: 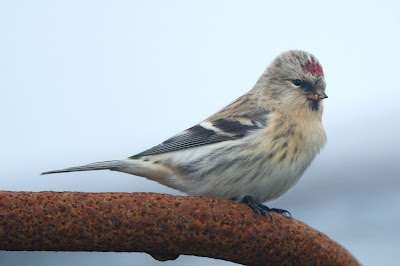 Present on the island since we arrived in mid-May, our resident BARROW'S GOLDENEYE continues on Weather Bureau Lake: 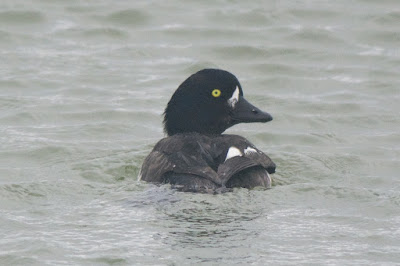 In shorebird news, it's stunning to scope the Salt Lagoon and NOT see Rock Sandpipers!  Sure, there are a few stragglers remaining but the vast majority have departed their breeding grounds and have migrated south to the Aleutians.  They are such a staple here during most of the season that it seems strangely quiet and stark without them.

Also, we now have TWO different JACK SNIPE on the island; another one was found at Tonki Point Wetlands just yesterday.

Speaking of snipe, sometimes you have a bird that you miss once or twice... and then it's three and four times.  Before you know it, it becomes a nemesis.  That's what COMMON SNIPE was to Ashley.  Was.  We were finally able to connect with the continuing bird from Pumphouse Lake: 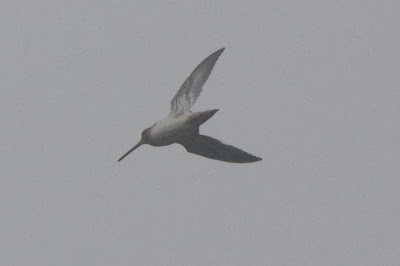 Thankfully, the fun didn't stop with the COSN.  Scott had found a Code 3 OLIVE-BACKED PIPIT on Hutch Hill and so nearly all the birders on the island converged there later that evening.  Although it was quite uncooperative, as this species of pipit can be, we all were successful in seeing the bird flush several times.  An easier photographic subject was the beautiful fall evening with the bright sunlight contrasting with the incoming squalls:

To top things off, we called it a night after relocating a SNOWY OWL that was found near the Coast Guard Station.  Although regular here in spring and fall (and sometimes summer), does anyone actually get sick of these ghostly sentinels of the north? 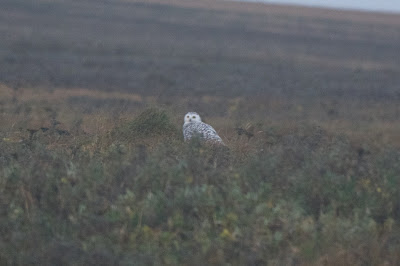