At this point in the fall, things are changing and fairly quickly compared to the long and slow journey the summer took to get here.  The sun isn't rising until 8:45 AM and, amazingly, now sets before 10 PM.  Today, with ripping winds out of the north, actually felt like fall complete with wind chills in the 30s.  We had frequent squalls including one with actual sleet (this reminds me of later in the fall when we get squall lines of snow pushing through).

This time of year also means the arrival of some interesting species.  I often that kid that being here on St. Paul Island during the fall will ruin certain species for you.  Of course, it's a bit tongue-in-cheek but here's what I'm getting at.  You see, I wasn't raised in this part of the country.  I spent most of my formative birding years in the Midwest where, not surprisingly, SHARP-TAILED SANDPIPERS are essentially nonexistent.  This Code 3 species, after all, doesn't breed here in North America and if it shows up in the L48, it almost always receives attention (which is how I saw my first one 4 years ago in California).  Then cue coming to St. Paul Island.  Not only are migrant SPTS present (yes, that's the code), they can be downright abundant in the fall.  The first couple you see are amazing and, you know, the next couple are pretty cool too.  But then fast forward a month.  What if you see them every single day?  And what if you see 50+ some days?  Because that's what happens here.

Right now, in mid-September, the numbers of SPTS are starting to peak.  Although we "only" had ~45 today from only 2 different wetlands, I'm sure there are more than 100 on the island currently.  Here's a view of a small flock of SPTS (with a dowitcher thrown in for good measure) on Rocky Lake: 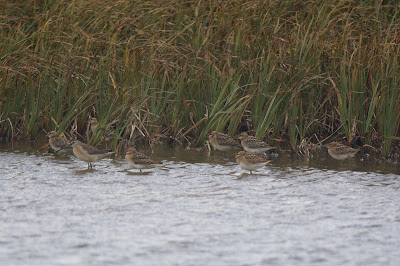 So yes, by the time we leave here in the fall, we'll be thoroughly jaded in terms of Sharp-tailed excitement levels.  But still, and I try to remind myself of this from time to time, it's not only sharp-tailed, it's also sharp looking: 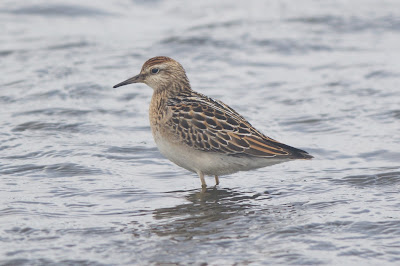 With the changes in the weather came a few new fall arrivals.  In the fashionable new 2015 fall line, we have these 5 handsome EMPEROR GEESE that, for a limited time only, graced the spit on Big Lake: 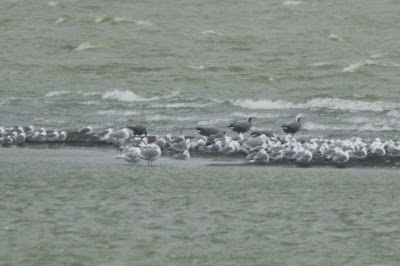 Although these were the first EMGO seen this year on St. Paul Island (we missed them this spring), I checked my records from last fall on eBird and I had them on 12 different days.  So yes, I think we'll be seeing more of these unique geese in the coming 5 weeks.

Another new arrival yesterday was this lone BAR-TAILED GODWIT that Ash and I found on the shore of Big Lake after 10 PM last night.  With the ISO cranked unusually high, I was at least able to capture proof of its identity instead of seeing a dark blob in the shadows and wondering if it was a Black-tailed: 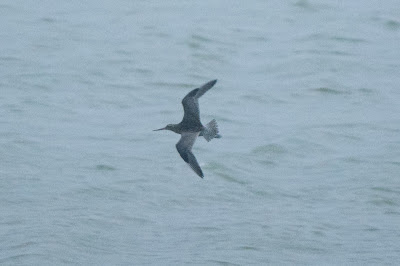 Thinking back to the spring and all the odd UFO-like sounds being uttered by the omnipresent ROCK SANDPIPERS, it's sometimes a shock to think how much those ruddy brown birds have changed in appearance.  In their winter attire, as they're dressed now, they're a completely different looking creature with gray feathering above and gleaming white undersides: 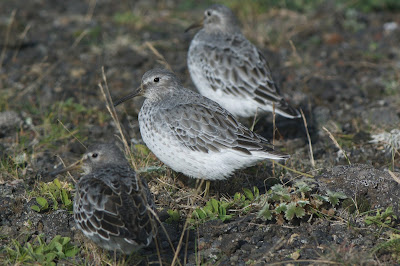 If you've birded here during the fall season, as hundreds have, you've probably plodded mindlessly through a celery patch.  Yes yes, this must be done.  It's not all bad though.  For example, walking Antone Celery last night with Gavin and his WINGS group was downright scenic: 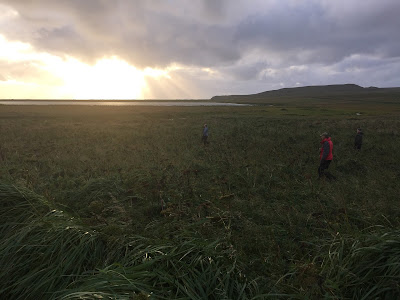 Did you know that we have 3 wind turbines here on St. Paul Island that help power the airport/hotel complex?  TDX Power, the owner of the turbines, says that this system eliminates $200,000 each year in utility electric charges.  Impressive.  Here's the view of the turbines from last night: 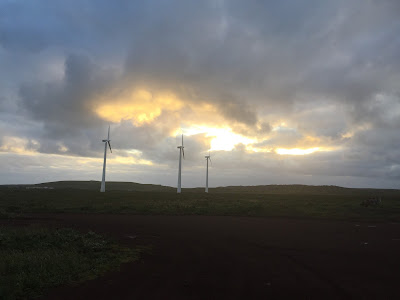 I should add, as I close, that there have been some interesting sightings pop up just this evening.  The biggest news is that Alison, Gavin, and the WINGS group found a PURPLE FINCH tonight representing the 1st ever record for the Pribilofs.  Although Ashley and I zoomed out there immediately, the bird had already moved on.  Bummer.

Have any questions?  Feel free to shoot me an email at: