It's October!  It's also Friday already which means we fly out in only 2 weeks.  Craziness!  In the meantime... the blog.

It doesn't take long looking around outside to notice that the seasons are in full flux right now.  The vegetation is matted down, the landscape looks brownish, winter is coming!  The seabird cliffs that hosted hundreds of alcids are quiet save for a few cormorants.  But we bird on. 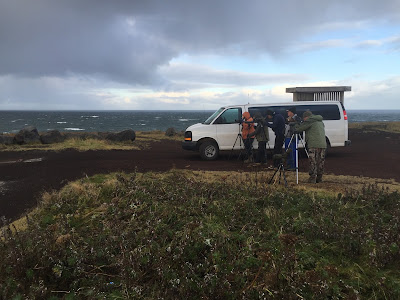 Here is Aaron L. and his Wilderness Birding Adventures group doing some seawatching from Southwest Point.  The point remains a worthwhile spot to seawatch from and most visits yield seabirds like THICK-BILLED MURRE, HORNED PUFFIN, RED PHALAROPE, as well as the more abundant species like GLAUCOUS-WINGED GULL.  Here's one in the process of molting its outer primaries: 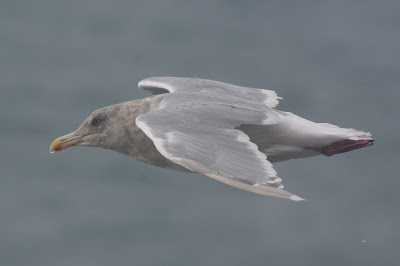 I'll throw this picture in as well, also taken at Southwest Point.  It's not a great photo by normal standards... it's dark.. and I cropped it strangely.  Still, I'm not sure why I like it so much: 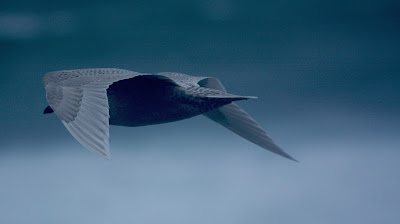 Walking the lava fields at Southwest Point usually is an exercise of futility.  Then every once in a while you bump into something you're glad to see.  We found this agreeable AMERICAN PIPIT just the other day: 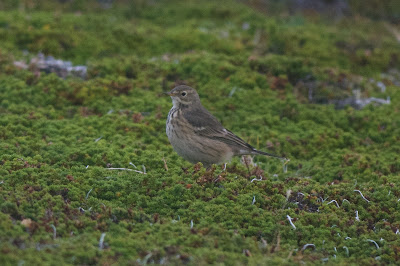 The rarest bird of the last week came when Aaron and I were taking the group past the Webster House area.  We caught sight of a thrush flying by and thankfully we were able to exit the vehicle and snap a few photos before it flew out of sight (and never to be refound).  The verdict?  It was a Code 4 vagrant DUSKY THRUSH.  Here is my sad, sad series of photos: 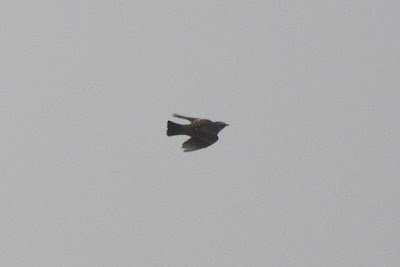 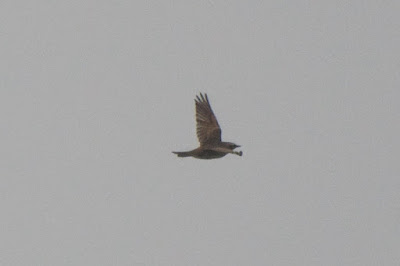 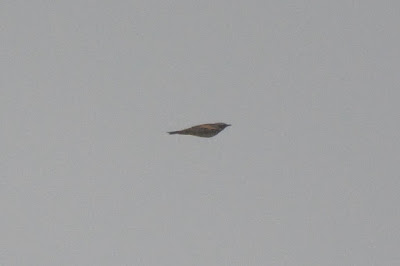 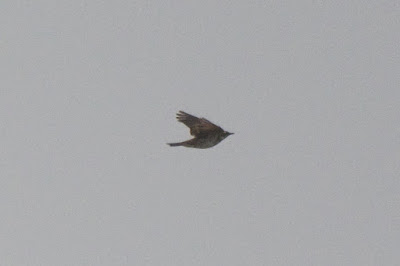 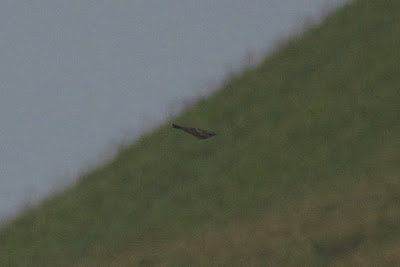 So there you have it.  Sometimes the birds find you!  Although this was a new island bird for me (I missed the one last fall), my first Dusky came nearly 10 years ago (June 12, 2006) when some friends and I found one in the cemetery in Barrow.

In terms of other Code 3+ species lately, it's been fairly quiet.  Sure, we have the normal Code 3 species like SLATY-BACKED GULL and SHARP-TAILED SANDPIPERS but they hardly seem to count anymore.  :-)

There was a very shy SIBERIAN RUBYTHROAT (Code 3) that was only seen in flight by one group but no one was able to relocate it.  We DO have that continuing JACK SNIPE though, so that's something.  I seem to have gotten lazy in terms of trying to get better photos of it though.  Here it is in silhouette style: 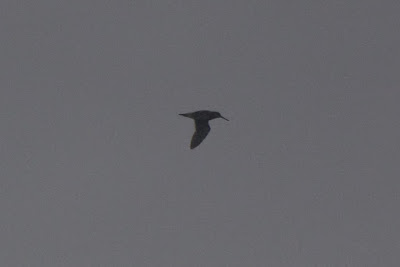 We also continue to find SKY LARKS (Code 3).  Here are two in flight (from like a mile away) near Hutch Hill: 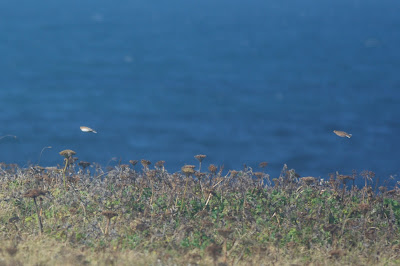 Chucking the whole Code 3, Code 4 nonsense for a second, we've had a stunning GYRFALCON around for several days now.  Although this record shot leaves much to be imagined, seeing this bird making passes at GRAY-CROWNED ROSY-FINCHES at Polovina Hill was just a riot to watch! Here it is roosting just below the upper lip: 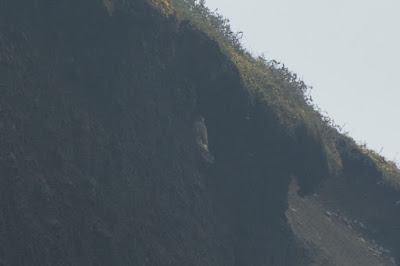 We didn't have any Gyrfalcons around last year so this was actually a new island bird for me (and was only the 8th Gyr I've ever seen).

I actually snagged another island bird that day as well.  This RED-BREASTED NUTHATCH has been frequenting the old auto dump where it will forage among the twisted metal and flattened cars (or sometimes celery, as seen below): 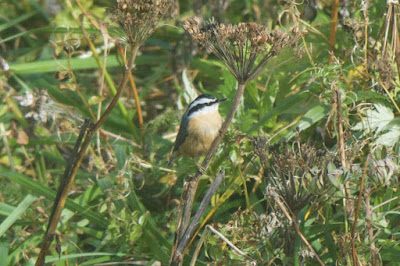 It's easy to see this picture and see the nuthatch in it... but remember that to get here, this tiny bird flew 300+ miles over a very unforgiving Bering Sea.  This little warrior is lucky to be alive.  Hopefully it rights its path and finds a nice coniferous forest to spend the winter in.

Not all birds that reach the Pribilofs survive their layover here.  Cue this PEREGRINE FALCON we saw yesterday evening.  Before we knew it, it was in a stoop directly in front of us! 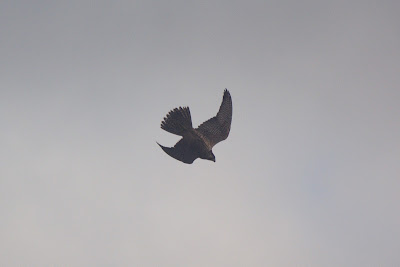 It continued to gain speed: 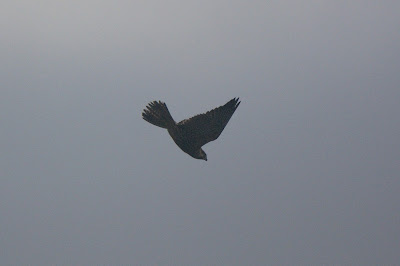 When a Peregrine wants to chase something down... it will.  In fact, no other flying creature on this planet can outpace it.  That list includes RUDDY TURNSTONE.  Here are both birds at the split second before impact; one filled with hope, the other with dread: 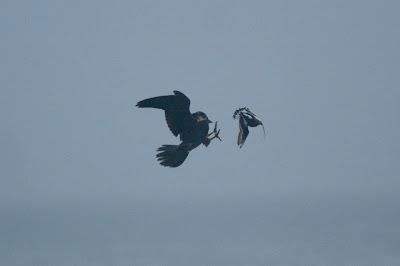 ... and yes, the Peregrine was successful in nabbing the turnstone right out of the sky: 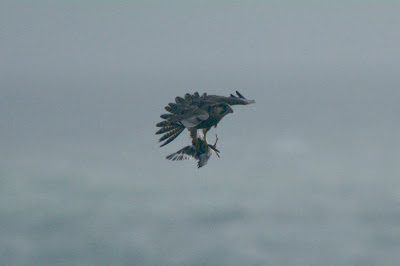 But guess what... there is one species here that scoffs at falcons and turnstones alike.  It's a safe assumption that PACIFIC WRENS don't need to worry about falcons.  These little dudes spend their time tucked way down in veg and crevices and such.  Here's one today from Zap Ravine: 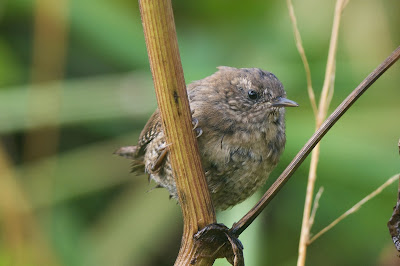 Also in Zap Ravine, this FOX SPARROW was the first we've had in nearly a week (and the first for me in 11 days): 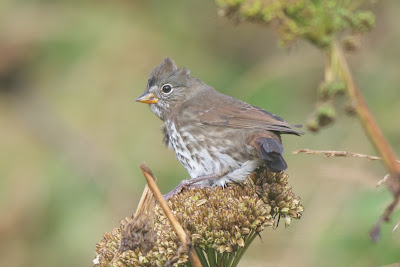 I'll end the post with two photos of mammals to round things off.  I'll start with this face-to-face with an ARCTIC FOX: 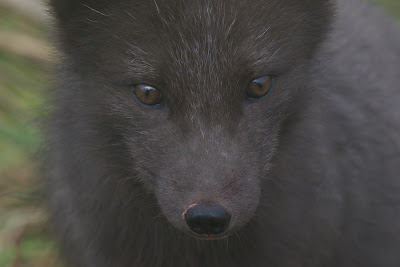 Also, the REINDEER herd was just opposite Antone Lake today!  Notice a lot of antlers?  Indeed, that's because female caribou/reindeer also have antlers: 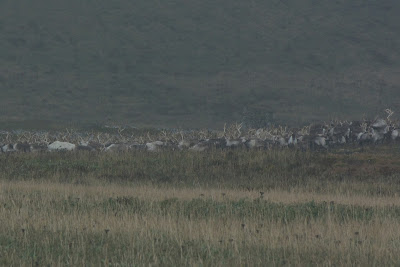 That's all for now but stay tuned.  Maybe my next update will have some news of a rarity!  Orrrrrr maybe more photos of foxes and reindeer.