We've been having some dominating northwest winds lately and finally those winds have brought us a crowd-pleasing rarity.  Doug and I found this JACK SNIPE in Pumphouse Lake the other day: 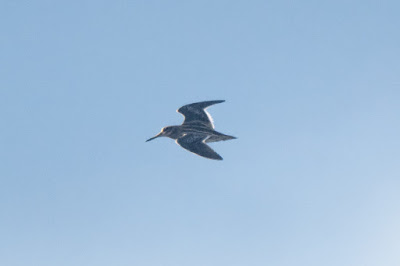 Perhaps the funniest thing was that we found this bird mid-conversation in which we were discussing how the habitat on Pumphouse Lake looks fine for JASN!  In typical Jack Snipe fashion, it flushed close, stayed low, and dropped down into some habitat a short distance away.  After convening all the birders on the island and lining everyone up appropriately, it was time to flush the bird in front of everyone.  It worked splendidly; we watched it flush, fly around everyone, and land a short distance away.  A few people let out a hearty cheer (which actually flushed the bird again).

This Code 4 species was the 9th record for St. Paul Island (keep in mind that we had 3-4 individuals just last fall!).  Actually, the Pribs and Jack Snipe go way back; the first ever record for North America was a specimen here in 1919 and it remains that there is no better place in the ABA area than St. Paul Island to hope for this elusive and tiny snipe.

Earlier that day, Doug and Alison ventured to less-birded places and found some quality things like OVENBIRD (a phenomenal first record for Pribilofs) and a SIBERIAN RUBYTHROAT (our first of the fall).  Later in the day, Doug found this Code 3 SKY LARK that eventually allowed great views for all the birders on the island: 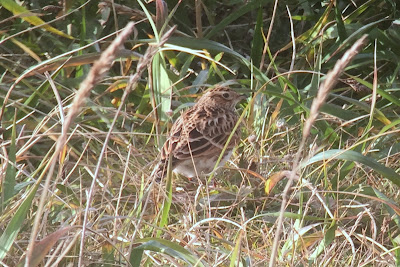 You might remember the MEW GULL we had around for a while?  Well, I saw it again and picked it up from the edge of Antone Lake... dead.  Here's a picture of the tail pattern I was so interested in: 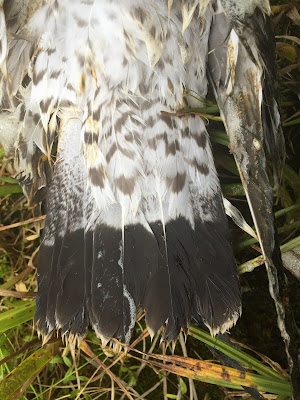 So by looking at that tail pattern, I suppose it's safe to call it a "Kamchatka" MEGU now, post-mortem?  I'm not sure exactly what happened to the bird but, like with most birds, the first year of life is often the harshest.  RIP, Mewey.

Although these two birds aren't lining up as perfectly as I could have wanted, I'm still happy to have this comparison shot of RED-NECKED PHALAROPE (left) and RED PHALAROPE (right): 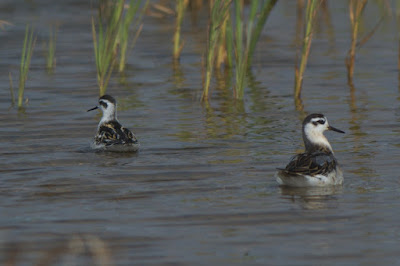 Notice the daintier build and thinner bill of the RNPH.  At this point in the season though, RNPHs become much less common and downright rare whereas the REPHs move in by the hundreds.  In fact, I'm sure you'll see more photos of phalaropes on this blog in the coming days.

One of the staple passerines here on the island is the PACIFIC WREN.  And yes, they're doing fine; here's one that perched up nicely: 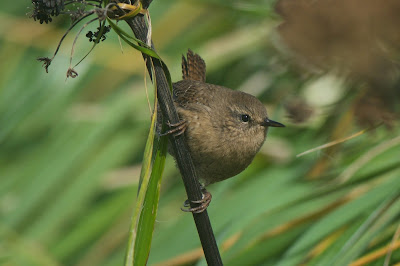 I'll end with a couple of non-bird photos.  The weather has changed lately into fall-mode which means slightly more blue skies, more frequent squalls, and chillier temps.  Here's a view of Gorbatch Bay:

And this stunner from Reef Point shortly after sunrise:

I can't complain, the sunsets aren't bad either: 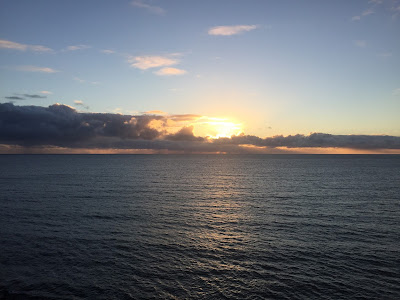