Victims of the in-house fly-by

As I type this, we're having a bit of a wind event.  Ok, more like "it's actually windy now".  For the last 24 hours we've had SW/W winds at 40 mph with gusts today hitting 60 mph.  This, together with a substantial amount of rain, made for some sad shorebirds (they'd sit hunkered down alongside puddles and such).  For example, you know you're in a storm when you're seeing RED PHALAROPES in the middle of the road next to puddles: 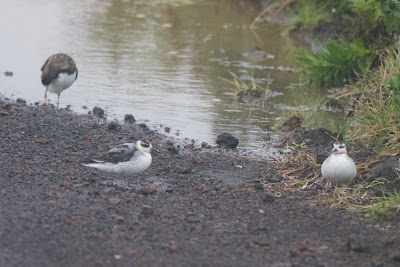 (Speaking of Red Phalaropes, though, it still cracks me up to see these out-of-control flyers zooming through town, riding on gusts of wind.  I saw one today almost careen right into our living room window but thankfully we remained victimless of its fly-by.)

It has been apparent of late that we had a new bunch of redpolls reach St. Paul Island after the last batch of north winds.  In a matter of 1-2 days, several of us were seeing HOARY REDPOLLS (which had not been happening lately).  Ashley and I bumped into this beauty in the lake bowl of Lake Hill: 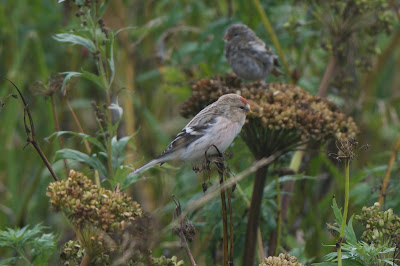 As is typical for St. Paul Island at this time of year, we have several species of migrant sparrows lurking about.  For starters, here is a comparison photo showing GOLDEN-CROWNED on the left and WHITE-CROWNED on the right: 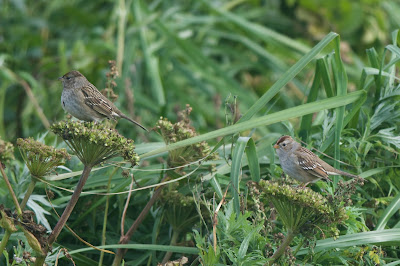 Another expected fall species is the SAVANNAH SPARROW; usually these are seen every day (barring hurricane-like conditions).  Here's one perched in a celery patch: 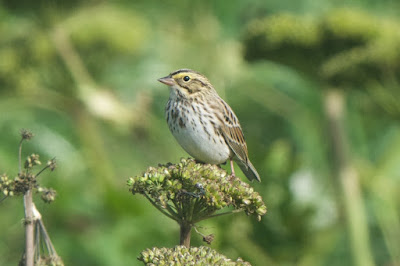 For several days the celery patch at Antone Slough was *the* place to be.  We've had recent sightings of Yellow and Orange-crowned warblers, up to 8 Savannah Sparrows, several Pacific Wrens, White-winged Crossbill, Fox Sparrow, etc.  In fact, here is a picture of the latter there in that patch: 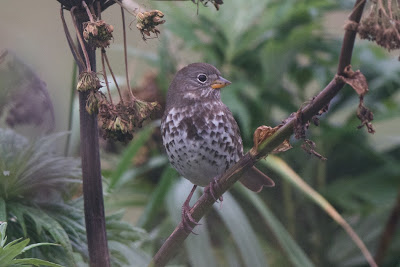 However, it seemed to me while guiding yesterday that many of these passerines up and jumped ship the previous night.  Birding was generally slow... but we were happy to have this calling RED-THROATED PIPIT, my first of the fall, fly over Pumphouse Lake: 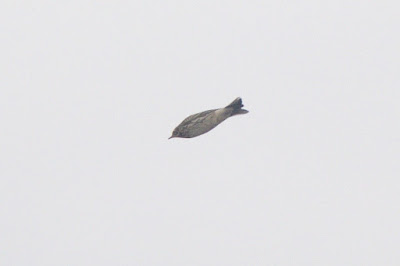 Checking eBird, it shows that I had this Code 3 species 4x last fall and all between 7-21 September.

Ooh, guess what... we still have some stunner puffins around!  Yep, I visited some seabird cliffs yesterday for the first time in quite a while.  It was good to be face-to-face with my clown-like summer friends yet again.  Here's a digiscoped picture I took with my phone through my scope: 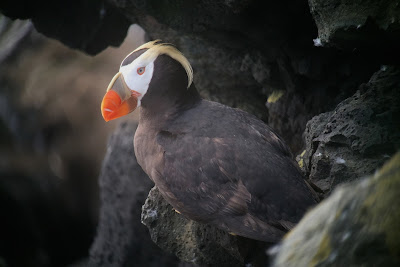 There was no shortage of HORNED PUFFINS either.  Here's one doing a fly-by: 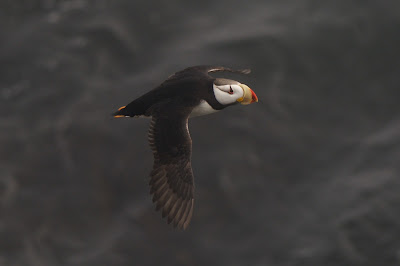 Well, it remains to be seen if this current batch of strong west wind will deliver any oddities to our shores.  We have several hardy birders here that are desperately hoping the next several days yield something fun... and it very well could!  Our friends to the north in Gambell had both a Red-flanked Bluetail and Siberian Accentor today; maybe they'd be willing to share??
Posted by Cory J. Gregory at 9/14/2015 01:57:00 AM