Knot the birds we were looking for

Well well well, here we are, September 5.  Although we had a Jack Snipe on-island this time last year, Code 4 and 5 species remain at large so far this September.  As an aside, if you were on Shemya right now, you could be enjoying a Code 5 Marsh Sandpiper!

However, that certainly doesn't mean that the birding has been bad lately.  We did get a little taste of rare the other day, actually.  Ashley and I were at Southwest Point when a couple of shorebirds caught our attention feeding on the kelp line.  Unfortunately they picked up and immediately flew east.  However, we grabbed our cameras caught them right as they went out of view: 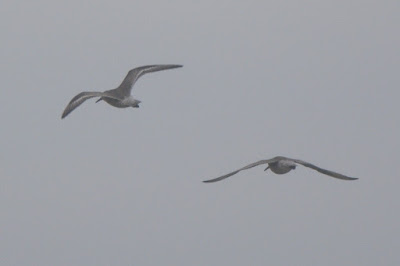 The size (larger than the ROSAs and RUTUs they were with) along with the faint wing stripe and gray rumps confirmed our suspicion; they were juvenile RED KNOTS.  Although a familiar bird to most, they're quite rare here; this record was the 16th all-time for the Pribilofs.  Things got even a bit more goofy when Ashley spotted another REKN... but this one wasn't a juvenile.  An adult! 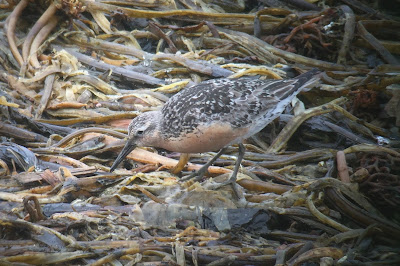 So yes, we are hosting 3 RED KNOTS.  Big deal?  This is the first time that more than 1 Red Knot has been seen here at the same time in 50 years.

Even though it's not an Asian rarity, I was happy to find the knots.  Besides being a new island bird for me, I managed photos and can add it to my ever-growing photo list from the island.   However, if it's an American splash of yellow you're looking for, this TOWNSEND'S WARBLER works just fine: 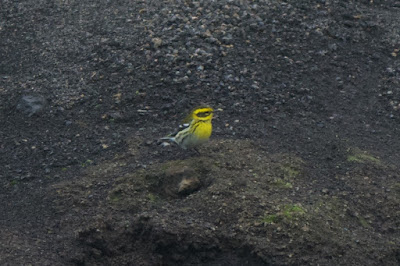 This bird, along with another TOWA, was feeding in the upper cut of Polovina Hill and thanks to a heads-up by Scott, I got there later in the day and snagged another new island/photo bird.

Although I managed no pictures of it, we also had a SWAINSON'S THRUSH at the Quarry pots the last couple of days.

Generally, no wood-warbler is considered common here.  But of the ones that do tend to show up, the ORANGE-CROWNED WARBLER is up there in the top 5 expected species.  No complaints here, though, it has been a lot of fun having this guy hanging out in the pallets at the Webster House.  Although I got a glimpse of one last year (about 10 seconds before finding a Wood Warbler with Scott), this particular one filled the hole on my St. Paul Island photo list: 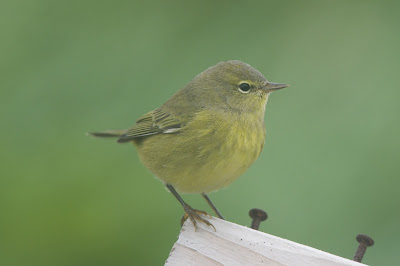 As expected, the number of SHARP-TAILED SANDPIPERS continues to grow and we're now seeing 10-20 each day.  Here's one working Town Marsh in the rain: 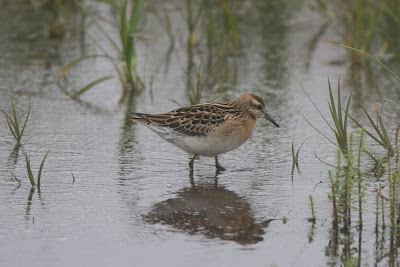 The MEW GULL has continued to stick around as well.  As best as I can tell, most fieldmarks are congruent with the Kamchatka race.  Here it is on Zap Beach showing a fairly long bill: 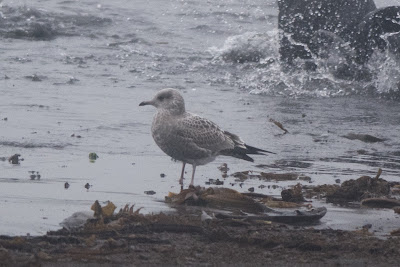 We've also had a RUFF hanging around at Marunich for the last several days.  When Ashley and I were up there yesterday, it was preferring to feed ON the horrible, slimy, and stinking whale carcass that has been decomposing there for half a year.  Once in a while it would jump off on to the rocks surrounding the carcass, as you can see here: 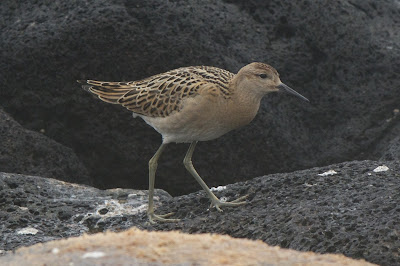 ... but then it would hop back up on it and, to my horror, walk through the slime puddle that has festered on the rotting flesh for months.  I may have thrown up a little when I saw it actually pecking around in the puddle: 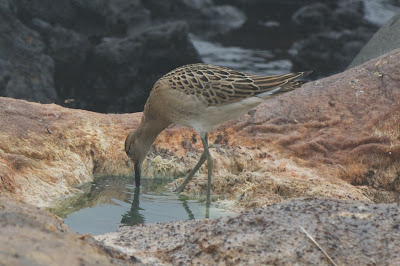 Anyway, eww.  Of all the puddles on the entire island, it picked the worst one.  I suppose where ever it goes next will be an improvement.

The RUFF and SHARP-TAILED SANDPIPERS aren't the only Code 3 species around though; Alison reported the first RED-THROATED PIPIT of the season at Marunich the other day.  Looking at my records from last year, I only had RTPI on 4 days and they were all in September.

Lastly, I was surprised to find this patch of blooming FIREWEED along the road towards Southwest Point.  Although it grows several places on the island, it typically doesn't bloom here on St. Paul due to the short growing season: 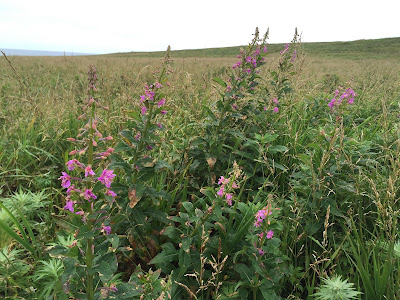