I remember last fall when, at one point, we had two different Wood Warblers here on St. Paul Island.  Besides being the first time that had ever happened in the ABA area... it was just downright weird.  Well, we found ourselves in a similar scenario yesterday when not one... or two... but THREE different WILLOW WARBLERS were found!  For being a Code 5 rarity from Russia/Asia, having three at once is just stupid.  This is how it played out....

My group and I were walking through the celery patch in the Antone area when one of the birders hollered and called me over.  Turns out, they had flushed a Phylloscopus!  We finally tracked it down, studied it a bit, and managed some photos showing that, yes, it was a WILLOW WARBLER: 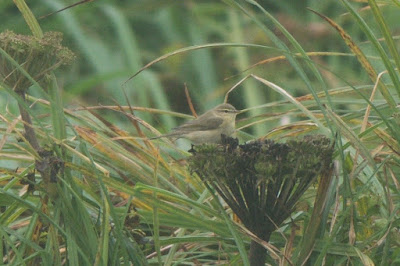 Looking above, you can see the yellowish cast overall, longish primary projection, a short eyeline that meets over the bill, and the lack of a faint wingbar.  On the following photo you can see the pale feet (Chiffchaff would more-or-less have dark feet): 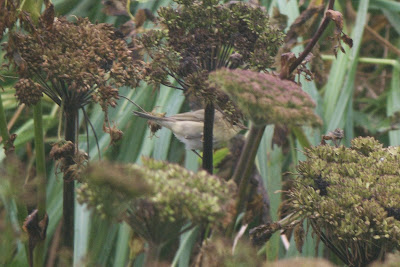 So that was cool!  Well, things got more bizarre when Alison phoned in that they had found ANOTHER Willow Warbler at Polovina Hill!  Although that bird could possibly be the one present there a couple of days ago, seeing that bird solidified the notion that there were two on the island.

Well, the icing on the cake came a short while later when my group and I found yet another Willow Warbler, this time in the quarry bowl of Lake Hill.  The first photo of it kinda startled me, just looked a bit different than other WILWs I'd seen (OCWA anyone?): 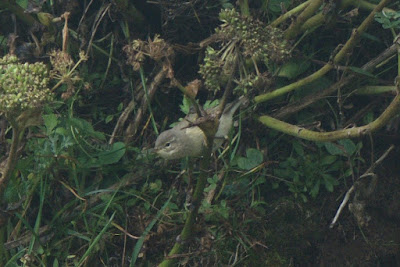 It was an active little critter though; it was constantly sallying for insects and before long, we all got good looks.  Here's another look, this time actually looking like a WILW: 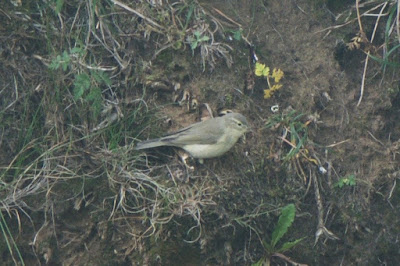 Anyway, I'm fairly certain that this was the first time 3 of these rarities were ever seen on the same day in the ABA area.  Well, fast-forward to this morning; I was keen to get Ashley on one of these since she still needed it.  When Alison relocated the one at Polovina Hill, the chase was on... and thankfully it stayed put for us: 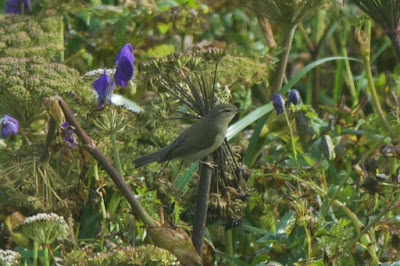 But Willow Warblers weren't the only rare birds to show up.  In fact, Scott had a nice find in Pumphouse Lake, a SOLITARY SANDPIPER! 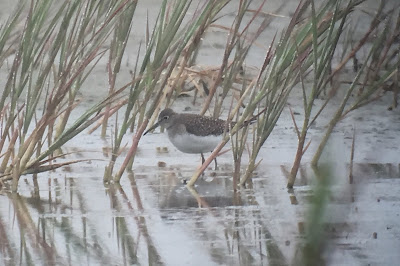 Not rare, but check out this comparison between different ROCK SANDPIPERS yesterday: 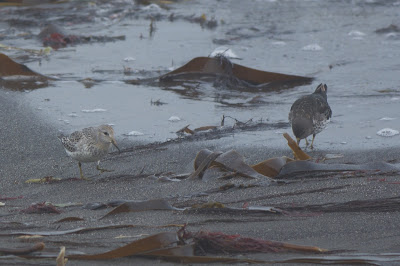 But first, some background info.  Rock Sandpiper (Calidris ptilocnemis), an abundant breeder on the Pribilofs, comes in four subspecies:

The left bird in the photo is one of our typical ptilocnemis birds that breeds here.  However, the drastically darker bird on the right is one of the other subspecies and these guys are fairly typical here late the season.  I'm guessing most of the dark ROSAs that show up here are probably tschuktschorum; they're the only ones that breed to the north of the Bering Sea islands.

A highlight today included finding this NORTHERN WHEATEAR on the top of Black Diamond Hill.  It was only my 5th of the season and 20th in my life: 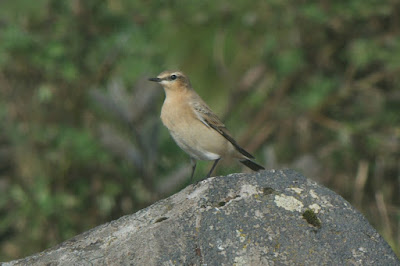 With August coming to a close soon, I wonder what the next fun rarity will be.  Stay tuned!  In the meantime, I don't think I've ever posted pictures of waves on my blog so here's a first: 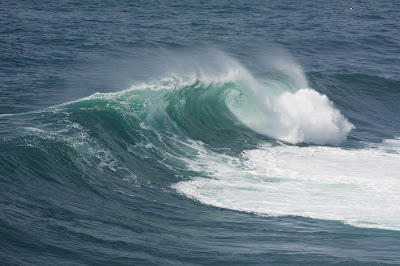 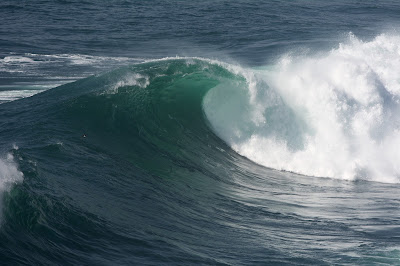