August is almost 1/3 completed already so what do we have to show for it?  I mean, does seeing a MALLARD on Antone Lake count?  Or five BANK SWALLOWS yesterday?  Ok, in terms of August surprises, there haven't been THAT many.

However, there was one surprise... this STELLER'S EIDER at Marunich: 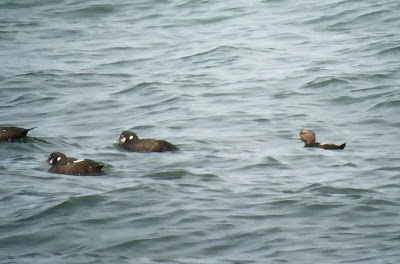 I've long been fascinated with eiders, especially the two northern specialties.  In fact, this year marks the 10th year anniversary of when I first worked in Barrow with Steller's and Spectacled eiders.  Such a loooong time ago, it seems.

We certainly didn't have a Steller's this time of year last season (although they've been known to happen) so I was a bit surprised.  I was starting to wonder about this particular species for Ashley (who needed it) but luck was apparently on our side this week.

In 2014, we had SNOWY OWLS early in the season and then late in the season.  This year, however, things have been different.  Yes, we still had some early on but this year at least one has decided to stick around all summer.  Problem is, we can't pin it down most days... but some days it's plain and obvious for the world to see.  Here it is, sitting on a rock in Rocky Lake looking down at what we would assume was its reflection in the water (yeeeah, I'm kidding): 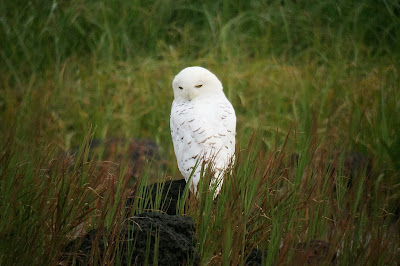 I've been excited at the notion that some mind-bending rarities could very well be around the corner this fall.  So when signs of summer (like the presence of auklets) disappear, it's both exciting and eye-opening.  It's true though, it has become quite difficult to see some species like Least and Crested auklets.  However, puffins nest a bit later and therefore, yes, the cliffs are still full of TUFTED PUFFINS: 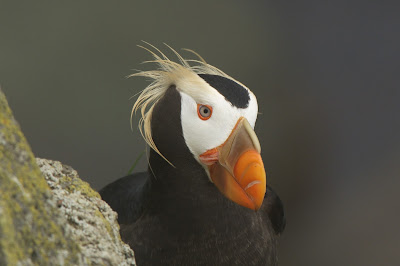 ... and with the wicked witch that is the wind, it makes for some magical tuft madness: 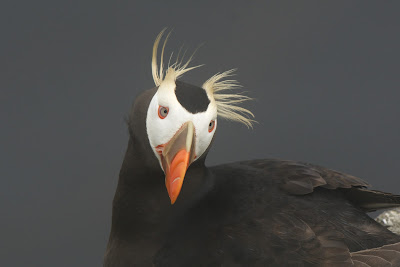 Although most of the ROCK SANDPIPERS have completed raising chicks and have moved from the breeding habitat to the coastal lagoons, I've seen a few stragglers.  For example, this adult was keeping a close eye on a youngster: 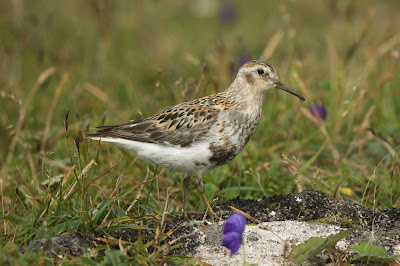 BTW, one clue in the above photo regarding the lateness of the season is the MONKSHOOD in the foreground.  Just so you know.

It's been interesting seeing some of the RED-LEGGED KITTIWAKES in molt including this bird retaining P9 and P10: 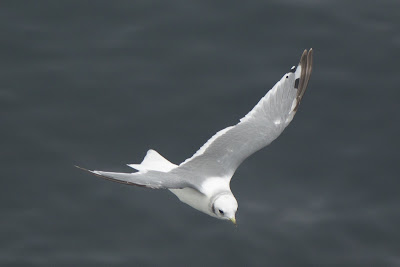 I won't mention the seals too much here other than yes, they're still here, and yes, this is a big male downhill from the Reef Seal Blind: 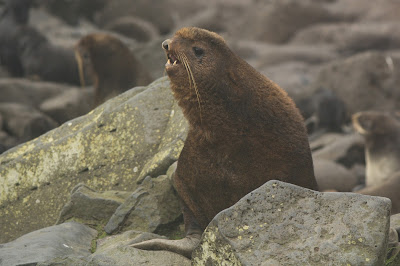 Oh yeah, speaking of big, the mondo COGA plane has been continuing in the area: 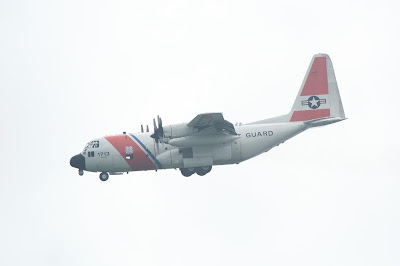 We often get asked if it's ever sunny here and ok, sure, it's dreary a lot but nice days DO happen.  A few days ago was one of those days; dead calm and sunny.  It was a nice day to head to High Cliffs and an even nicer day to take a panorama of the scenery: 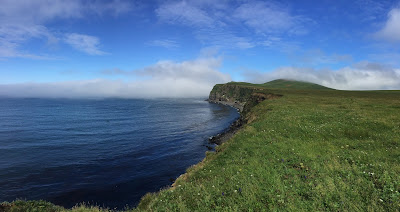 And finally to answer my first question of this post, yes, the WHITISH GENTIAN is still one of my favorite flowers on St. Paul Island.  Here are some adjacent to the Low Cliffs on the west side of the island: 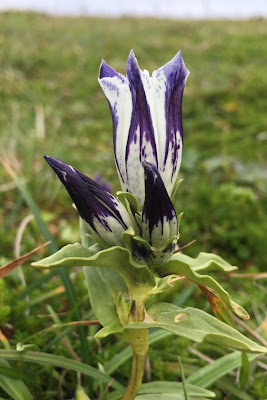