If you've heard me whining lately about how we couldn't manage any rare shorebirds yet this fall, I'll shut up now.  I was returning home from guiding a photography group last night when I decided to stop and look at Saucer Pond with my bins.  Are those peeps?  It warranted a scope view.  What greeted me were two RED-NECKED STINTS and, more importantly, a Code 4 LITTLE STINT!

Here's one of the first views I had of the birds: 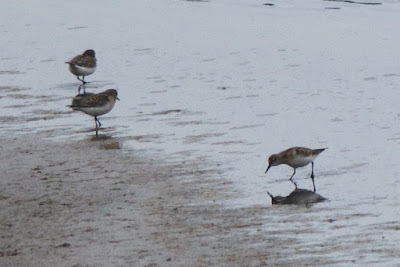 There isn't much to go off of but notice the taller, more leggy look of the front right bird.  With a bill that looks like a LESA's but without the short legs and hunched posture... we're off to a good start.

When compared with the obvious RNSTs it was foraging with, the LIST always looked slightly smaller bodied and longer-billed.  Here it is between the two RNSTs: 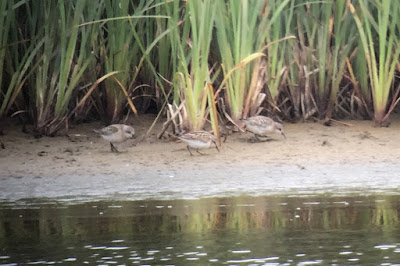 More important though are the black-centered tertials and coverts, both with rusty edges (something that RNST and WESA lack): 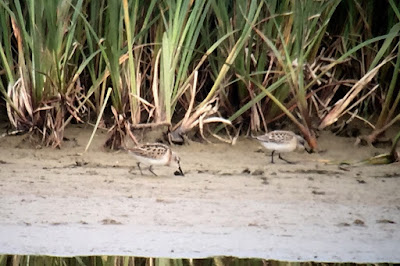 The bill on the LIST is noticeably longer and thinner-tipped than the RNSTs (see above).  Again, here you can see the bill as well as the tertial/covert patterning: 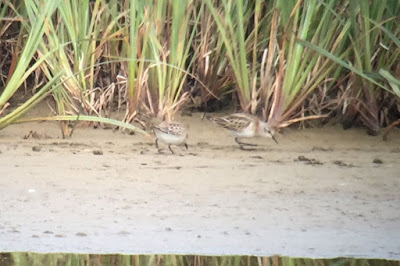 So all in all, you're looking for a peep slightly smaller than the RNSTs, one with longer black legs, longer bill, and with dark coverts/tertials that are edged in rust: 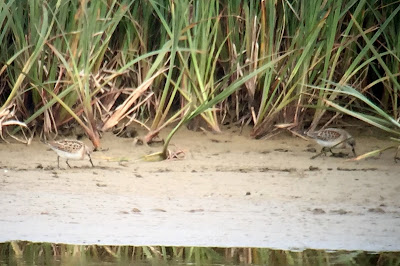 What a relief though, I've been borderline complaining about our lack of LIST here on St. Paul for a couple of seasons now.  So how rare are they here?  Rare... but not epic; this particular one is about the 20th Pribilof record and the first since 2012.  In fact, LIST has been seen 4 of the last 10 years (and 9 of the last 20).  But yeah, it's about time I get to update some of the sidebars on this blog.

Earlier in the day, some photographers and I made the trek to High Bluffs and back.  Once you get up there and look back south, you can see Otter Island in the distance as well as 300-400 feet down to the Bering Sea (assuming it's not foggy, of course): 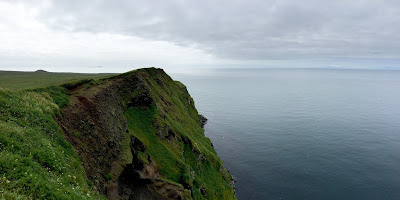 Looking north, you can see where the island starts to curve around to the NE.  The view is stellar though; this panoramic photo doesn't do it justice: 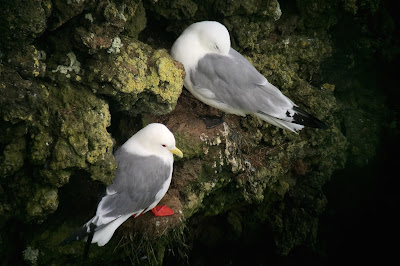 Once I was back at SW Point scoping from the bluff, I found myself in the middle of a roaming hoard of feeding ROCK SANDPIPERS.  The little yellow flies (with numbers that have bordered on epic/plague proportions this summer) were keeping sandpipers both busy and fed.  So busy, in fact, that they didn't really mind me laying down in their midst to creep on them with my Nikon.  Here's proof: 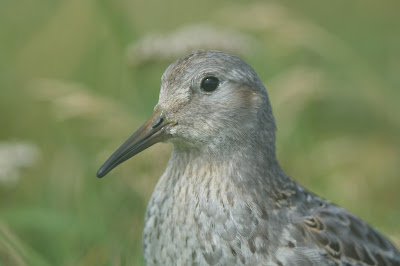 There were also some RUDDY TURNSTONES mixed in but they were a bit more keen and wary (probably due to them being adults instead of youngsters).  Here's one stretching its neck to get a better look down at me: 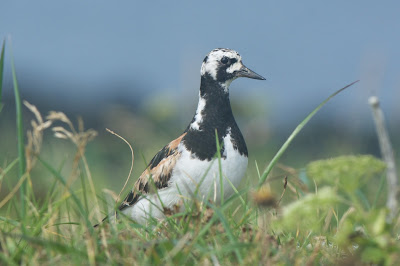 The evening was spectacular though and I think the photographers I was with would agree.  Beautiful light cascaded down the cliffs at Reef which really illuminated seabirds as they came in to land.  I first had some fun targeting HORNED PUFFINS: 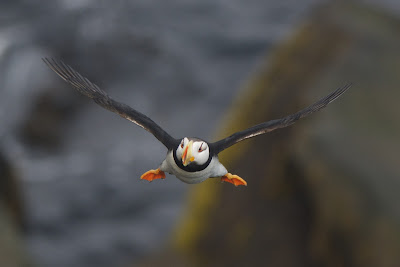 With their feet splayed and being used as rudders, they would fly in right at me... and I was waiting: 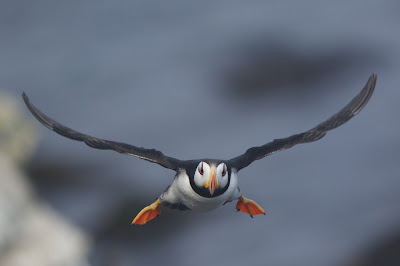 Not to insult the HOPUs, but yeah, I switched my focus to TUFTED PUFFINS at some point: 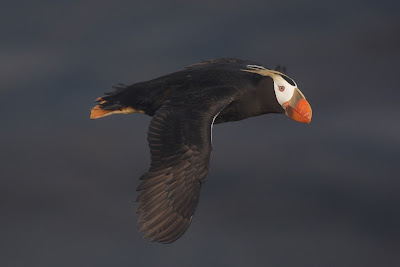 Most of them are still super sharp looking... 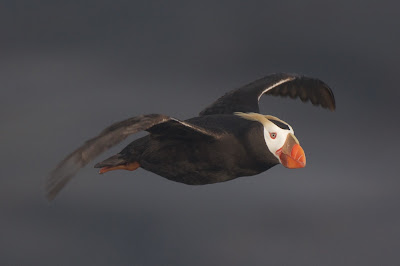 ... but then there are others.  I really enjoyed this "unTUFTED PUFFIN" when it flew past.  This molting is definitely a sign of fall! 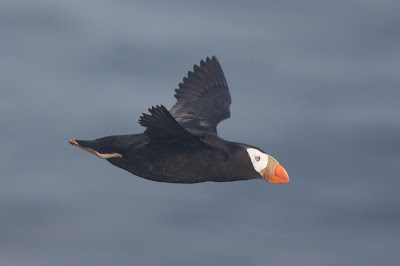 The TUPUs were doing the whole "I'm coming in for landing" thing too.  Here's one eyeing a potential perch: 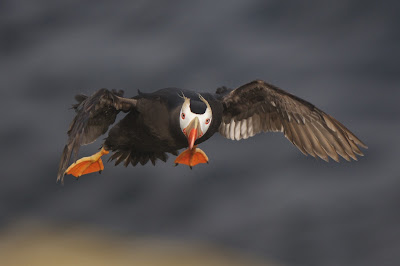 If you squint at this photo, all you see are two orange feet and a white face coming at you:

A species I certainly DIDN'T spend the evening taking flight photos of... GRAY-CROWNED ROSY-FINCH.  But hey, when a youngster perches on the seal blind, I'll still snap something: 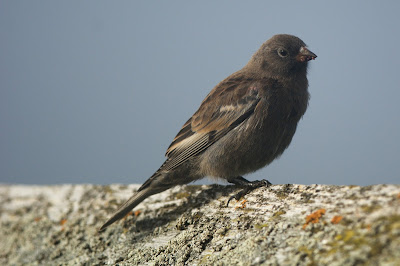 If you're familiar with St. Paul Island, you might recognize this as Pumphouse Lake.  And yeah, it's LOW, like super duper low.  I'm not even sure it's the best shorebird habitat on the island anymore... 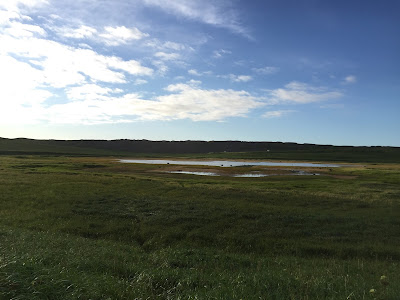