For better or worse, we're officially half done with the 5 month guiding season here on St. Paul Island.  Actually, we're more than half done (this is my 80th day this season with about 77 left to go... not that anyone is counting).  This gives me a logical break to look at some numbers...

For starters, by this time last year, my season list had climbed to 117 species whereas this year, I'm 5 short of that.  That is actually a smaller gap than I had expected; I feel like I had considerably more species last year but that's probably due to me remembering the vagrants more than some of the more expected things I got this year (SACR and SAGU anyone?).

It's not surprising that the first half of last season delivered about 20 new ABA birds for me whereas this season it's delivered only 4.  Obviously, most of that is due to me needing things then like all the auklets, kittiwake, cormorant, etc.  People often remind me that I might have had more lifers this year if I hadn't done so well last year.  :-)

The beginning of last August didn't provide much in the way of island birds; my first of the month came on the 16th when I saw my first Wilson's Warbler of the fall.  However, we've missed a couple of birds so far this season that I think could/should show up any day.  Red-necked Stint, for one, has been missed by us so far this year.  Sharp-tailed Sandpiper is another.

But in looking back, it WAS in August that the fun really began.  On the 25th, I had a memorable day that started with my lifer Bluethroat and ended with a chase to Hutch Hill for a Willow Warbler.  Of course, it was on our way back from Hutch that a Gray-streaked Flycatcher was near Webster House!  So with that, I eagerly await some new surprises!

In the meantime, it's no surprise to see lots and lots of LAPLAND LONGSPURS still.  After all, this is by far the most abundant passerine on the island: 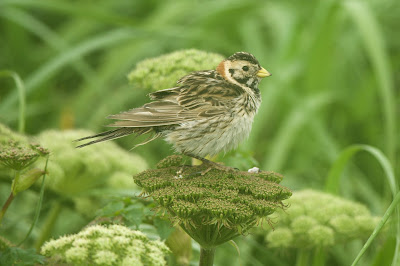 I mentioned in the last post that we've had a LESSER SAND-PLOVER around.  Indeed, it was around as recently as yesterday on the flats of Salt Lagoon: 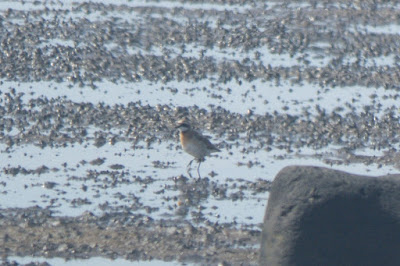 We still have finches around too.  I snagged my first island RED CROSSBILL the other day and yesterday yielded some continuing PINE SISKINS, these in the main quarry bowl: 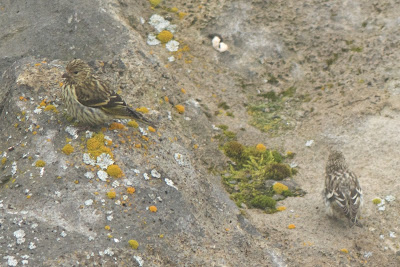 Not all unusual sightings of winged things are of birds.  We had this big boy rumbling overhead the other day; turns out it landed at the airport as well: 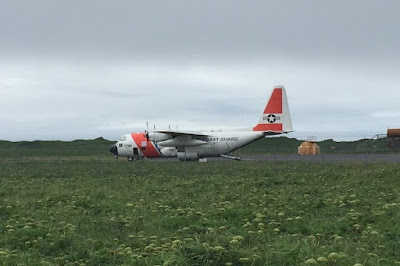 Sometimes the planes that land here are private jets that don't belong to PenAir or Ace Cargo (at least I don't think they do).  Here's a smaller plane that we watched take off while we were at the top of Lake Hill: 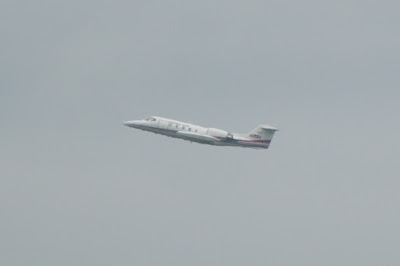 I can't say that I had ever seen an ARCTIC FOX standing literally in the middle of Rocky Lake before.  I suppose it's pretty shallow!  Shortly after I took this, it turned tail and ran full speed through the lake away from us: 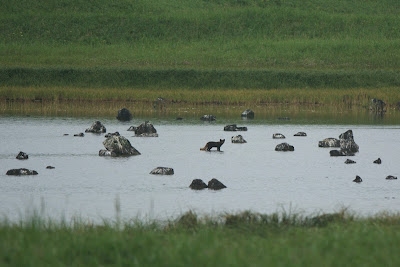 If you've spent a chunk of time here on St. Paul, you might know exactly where this panorama was taken yesterday: 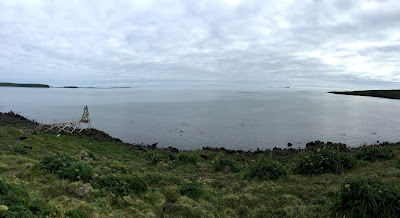