We've been on St. Paul Island for more than 100 days so far this year.  With fewer than 60 left, we have our eyes focused on the last 1-2 months, hoping for a successful fall with lots of goodies.

Speaking of substantial rarities, the WILLOW WARBLER god made a delivery to St. Paul Island yet again: It started when some clients and I were birding Polovina Hill a few days ago.  We were driving between the cuts when a yellowish Phylloscopus literally plopped down in the road in front of me!  It wasn't the most agreeable bird and although I managed some photos, the bird went missing.  Shortly thereafter, we found it in the lower cut and I managed some more photos before it again went missing: 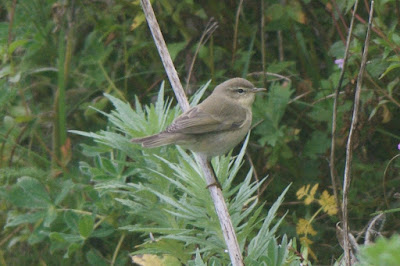 However, this somewhat slinky Code 5 rarity from Siberia has yet to be relocated despite a lot of effort.  Maybe it'll turn up somewhere else on the island soon?

The Phylloscopus warblers can be very difficult to tell apart.  Although I saw this bird in the light initially (and it had a nice yellowish cast), subsequent photos in the shade made it look much grayer.  Additionally, the wing projection in some photos looks startlingly short.  However, if you look through all of the photos of this bird on my Flickr account, you'll see photos that show a faint yellowish cast to the breast, pale feet, and primary projection that fits perfectly with Willow Warbler.

This is the 4th record for the Pribilofs and all have been within the last 5 years.  In fact, almost exactly one year ago we had the 3rd Prib record of Willow Warbler on Hutch Hill (that day also yielded a Bluethroat and Gray-streaked Flycatcher).  Although the ABA lists it as a Code 5 species, surely it will be downgraded to a Code 4 at some point.


The fall assortment of shorebirds continues to improve here on St. Paul Island.  It was several days ago that Ashley and I were birding Rocky Lake when we came upon this lanky dude: 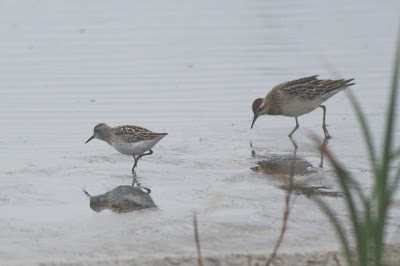 Which one?  Well, the right bird is a SHARP-TAILED SANDPIPER, a Code 3 species that we see in large numbers here in the fall.  The more interesting bird in this photo is the left bird, the peep with lanky yellowish legs.  And then it flew: 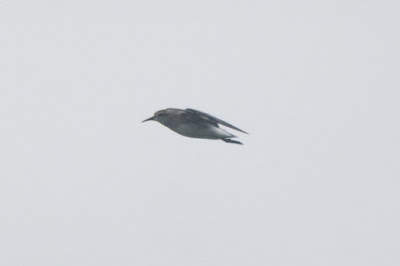 Besides the low Pec-like "churt" call it gave in flight, you'll notice that the feet extend past the end of the tail, a solid fieldmark for LONG-TOED STINT.  Here's another photo showing that helpful flight fieldmark: We eventually tracked it down again and managed some solid photos: 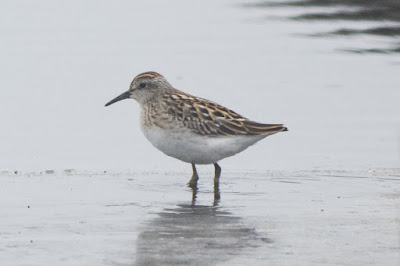 Long-toed Stint is another Code 3 rarity from Siberia.  Although it's hard to see how lanky its legs are in that photo, focus on the color... they're yellow.  That alone removes WESA, SESA, LIST, and RNST from the equation.  Secondly, note the white-edged wing coverts.  A Least Sandpiper would show rufous-edged.  Also, the dark brown on the forehead comes down all the way to the bill and joins with the dark eyeline that stretches back to the eye.  Anyway, how fun is that, though?  Ash and I had managed to find 3 of the 4 vagrant stint species this season and all on Rocky Lake!  Now for that pesky Temminck's.  :-)

While on the subject of peeps, here's a better photo of the SEMIPALMATED SANDPIPER that continues in Pumphouse Lake: 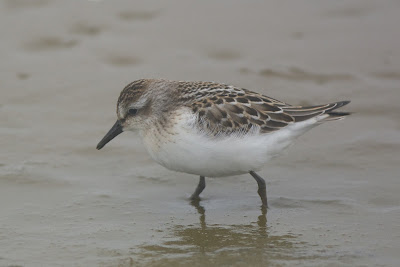 Note that the bill is rather short and blunt tipped.  Also note the wing coverts that are a) not solid black, and b) not edged in bright rufous.  The strongly-capped appearance favors SESA as well.


There was a day last week when all of a sudden WOOD SANDPIPERS started dropping in.  First, one on Saucer, then two on Saucer, and then Ash and I found this one at Antone Slough: 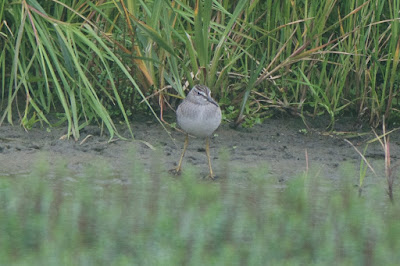 Strangely, this species is considered only a Code 2 whereas things like Sharp-tailed Sandpiper, Ruff, and Red-necked Stint are considered Code 3.  I understand that WOSAs have bred in the ABA area but man, I sure don't think SPTS = WOSA in caliber.

It's getting to be the time of year when we have to sort through juvenile tattlers.  Here's a WANDERING showing the lack of eyeline behind the eye: 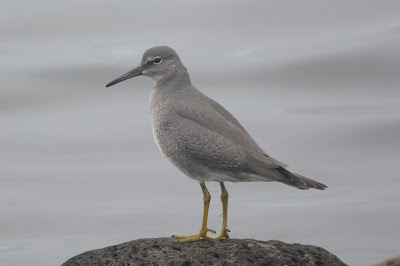 Although not a separate species, this is the Siberian race of WHIMBREL that we had flying around Novastoshna a few days ago: 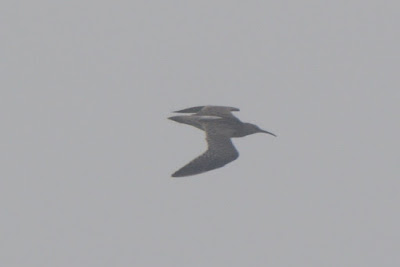 See the white wedge stretching from the tail up the back?  American Whimbrels lack that fieldmark.

Migrant passerine numbers are continuing to build.  We've had new arrivals such as GOLDEN-CROWNED SPARROWS, FOX SPARROWS, and unusually large numbers of SAVANNAH SPARROWS.  The latter has been seen at more than a half a dozen locations already including this one in the cut at Polovina Hill: 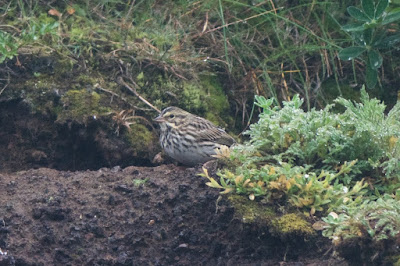 Yesterday was the first day of the 2015 season that we've had a North American wood warbler.  Here's a WILSON'S WARBLER that, joined with another WIWA, found the quarry suitable to bop around in: 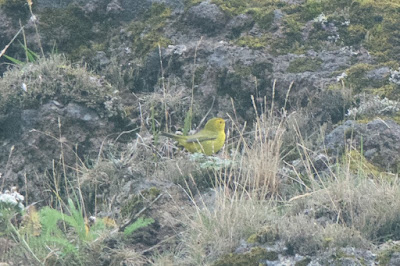 We still will visit cliffs from time to time although most of the seabirds have finished nesting.  For example, here are some THICK-BILLED MURRES that are looking over their look-alike youngsters: 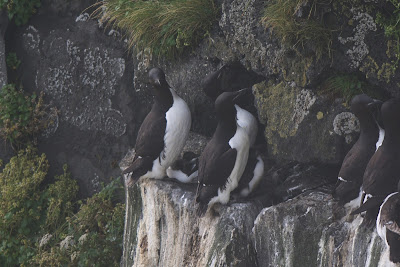 ... and talk about a fluff bomb, check out this young NORTHERN FULMAR on the cliff next to its parent: 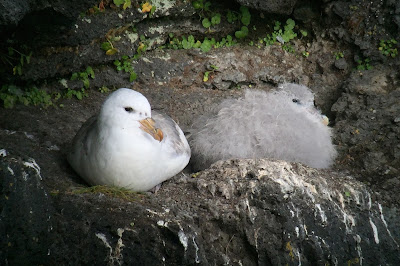 The numbers of PACIFIC WRENS are continuing to impress.  In fact, it's possible to see 10-20 in a day!  Here's one in the crab pots: 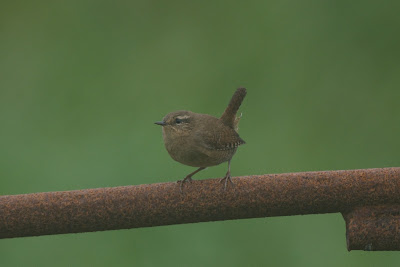 One of the more unusual sightings lately actually revolved around this dude: 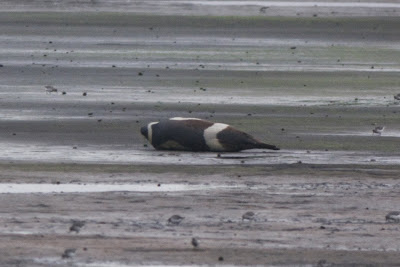 Right, NOT a bird.  This is a RIBBON SEAL and it actually caused quite the stir in town.  These are super rare to ever see on land (they're an "ice seal").  I think it was a lifer for everyone: 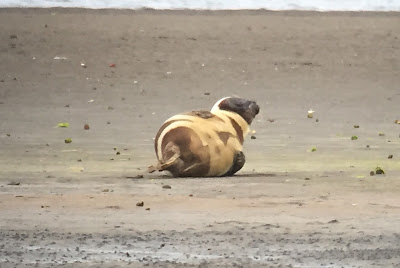 Problem is, there is a good chance it wasn't healthy.  It laid there for a day or two and although it disappeared one night after a high tide, I suspect it's probably dead somewhere.


I'll leave you with a panoramic view of the cliff at Ridge Wall.  It was a beautiful evening to lose yourself amongst the calls of seabirds.