Early DUNL and other signs

One thing worth mentioning these days is how low the wetlands are this summer on St. Paul Island.  Pumphouse Lake?  It's a shallow puddle surrounded by expansive dried mud.  Tonki Point?  Most of the habitat is gone and it's just edged in some mud.  Sadly, many of these have been largely ignored by shorbs (or maybe we just don't have shorbs).  It's times like these that Saucer Pond is looking downright good and Rocky Lake might have the best shorebird habitat on the island right now.

And yes, although August can have amazing passerines, I feel like the emphasis is often on shorebirds.  The spectacle of about a thousand shorebirds on Salt Lagoon the other night was humbling; one must get accustomed to sorting through hundreds of ROCK SANDPIPERS looking for the odd one out.  This DUNLIN fit the bill (and was flagged in eBird due to being a touch early): 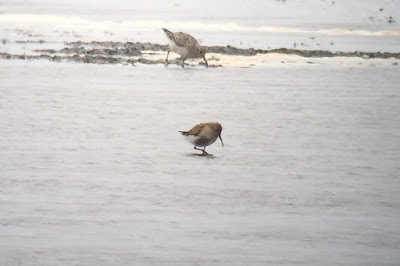 When you see peeps here, you may as well sit down and study them awhile.  Well, you don't HAVE to but it's probably in your best interest.  Here's a LEAST SANDPIPER on Rocky Lake Annex: 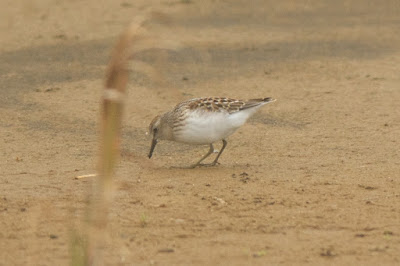 It's getting on the late side but I spotted this young shorebird going for a swim the other day.  I smile not only because it's cute, but because if you know what a juvenile RED-NECKED PHALAROPE looks like, you'll recognize those orangey stripes on the back straight away: 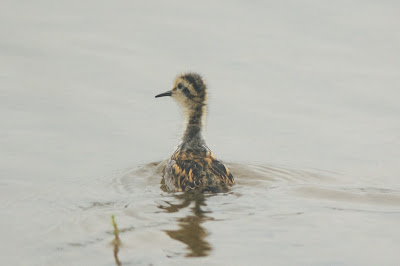 Speaking of orangey, the LESSER SAND-PLOVER has continued recently.  Although I haven't spent any time trying to get better pictures of this bird, it's still an attractive one: 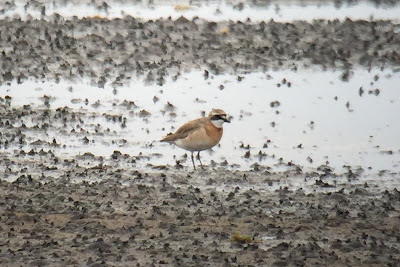 The flocks of LAPLAND LONGSPURS have really been building in recent days.  Most of the longspurs we have now are youngsters, ones born this year.  I will say that if you haven't spent time around young longspurs, the first one you see might surprise you: 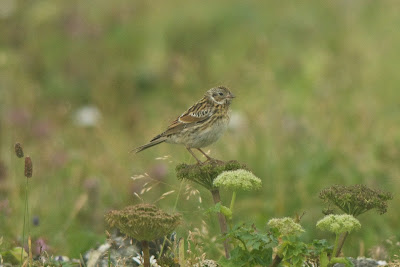 No, it's NOT a rare bunting of some sort, it's just a plumage you don't see farther south.

Some SNOW BUNTINGS are also forming flocks.  Striking birds, they are, especially when they land in front of you on the seal blind: 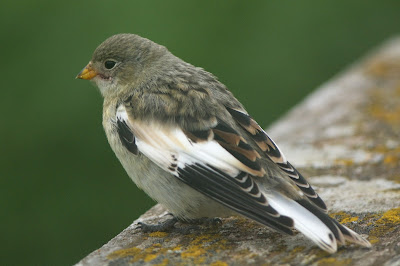 Yet another sign of fall has been the arrival of a few pipits.  Pipits here can be fun; we'll get Red-throated and hopefully a rarer one like Olive-backed or Pechora.  Or maybe we'll get the first Pribilof record of Tree Pipit?  Anyway, here's an AMERICAN PIPIT that has been near the parking lot at SW Point for the past several days: 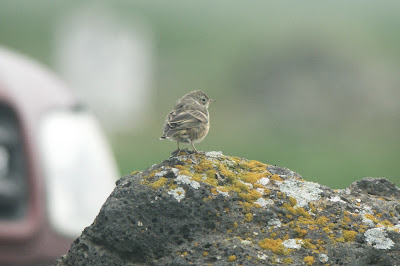 I bump into banded Red-faced Cormorants fairly often out here but this was the first time I had seen a banded THICK-BILLED MURRE.  Take a look: 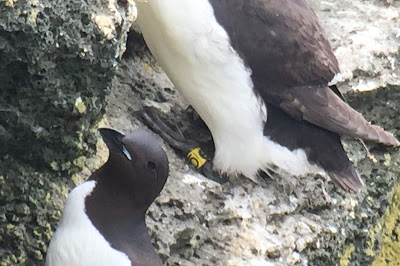 I'm not sure if the photos are good enough to ID the individual but it's still a surprise to be scanning the cliffs just to see a big yellow band staring back at you!

The NORTHERN FUR SEALS remain a dominant feature on the landscape and will continue through September and into October.  Here's a great example of a harem with the dominant male in the middle with all his females around him: 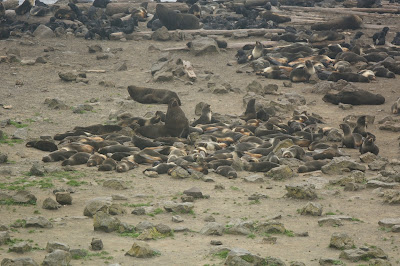 If you've never been to the Pribilofs, this time of year hosts large yellow poppies lining the lush green roadsides of the island: 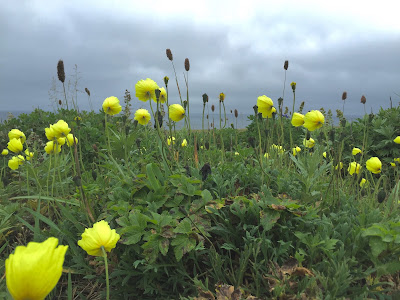