I'm only now realizing this but this post has photos of shorebirds... and photos of nothing else!  I suppose that means it's August, the best month for shorebird migration here on St. Paul Island.  But did you know that 65 species of shorebirds have been seen in the Pribs?  Think about that a second!

The last post highlighted the finding of the LITTLE STINT, a rare Code 4 shorebird.  So, is it still around?  Well, I walked some marshes two days ago and... 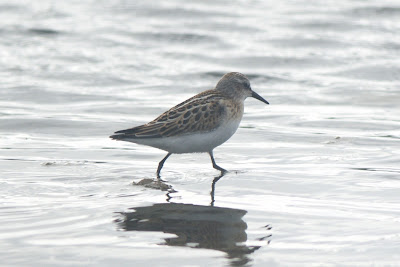 Yep, it was still around but this time it was on Rocky Lake.  This change of location isn't surprising considering Rocky Lake and Saucer Pond are quite close to each other and that Rocky probably has the best shorebird habitat on the island.  Anyway, as you can see above, the bird was much closer but pretty backlit (and didn't stick for long).

However, Rocky continued to provide shorbs during that visit.  For starters, there was this sharp DUNLIN (still flagged in eBird here) with its long and curved bill: 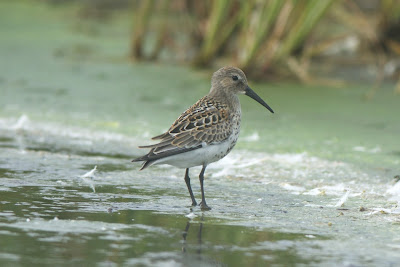 On a different shore of Rocky Lake, we bumped into another now-familiar character, a RED-NECKED STINT: 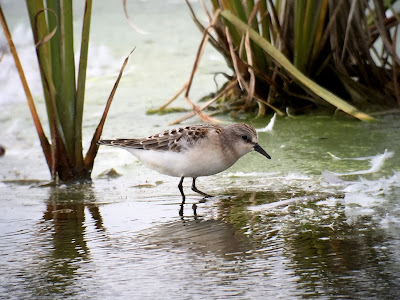 Note the super short and blunt-tipped bill, long wing projection, and bland gray tertials and wing coverts.  About now you must be wondering... yes, I really do love studying these stints!

However, it was about then that we spotted a mondo beast-of-shorebird come in to land... a Code 3 RUFF: 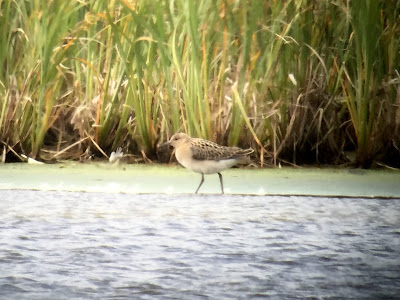 Although rare in most of North America, Ruffs are expected visitors here (they've been annual for a loooong time).  This particular bird was actually our first of the 2015 season so, yay, it was time to update the sidebar on this blog.  But did you know that the first Alaskan record ever for Ruff was a specimen collected here on St. Paul back in 1910?

Moving on, the following day I wasn't able to walk wetlands but I did digiscope this WANDERING TATTLER with my iPhone.  Nothing fancy, just a tattler getting some shuteye out at SW Point: 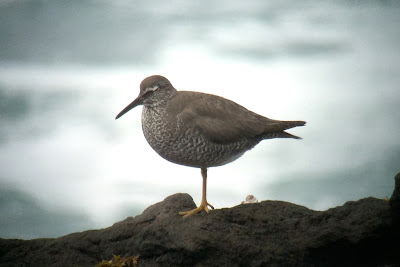 I had today off and so I walked some wetlands to see what was still around... and guess who was front and center on Rocky Lake still: 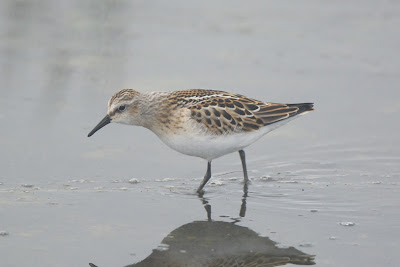 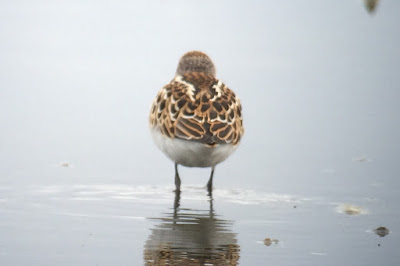 Oh, and LISTs don't have webbing in their toes like Semipalmateds or Westerns.  Check it out: Compare that with a WESTERN SANDPIPER that was also present today.  See the webbing?  It's small but it's there: 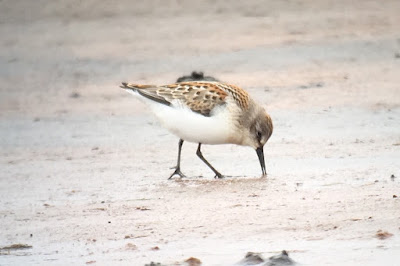 Compared to the Little Stint, see how bland and gray the tertials and wing coverts are?  Some of the scaps have black anchoring but that's about it.  Also notice the primaries don't extend past the tertials as much.

In fact, the WESTERN SANDPIPER was hanging out with these two fools today, both RED-NECKED STINTS: 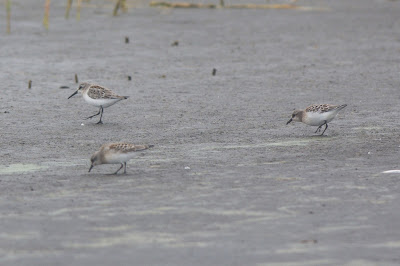 Notice how the WESA is a bit more leggy than the stints.  Oh, and comparing bill length with a view this close becomes almost laughable; the stints have such short and stubby bills!  What might be tougher is if we get a Semipalmated Sandpiper this fall... but that remains to be seen.  Literally.

Thanks for checking in.  As always, you can reach me here if needed: