The month of May finds us in Iowa for a stint (I mean, not a STINT stint).  But yes, Iowa is a former home state of ours and it's been fun seeing spring migration come and go in a place with actual trees and actual warblers.

Anyway, maybe I should start with the oddest sighting we've had so far?  Yeah, in this land-locked prairie state, an amazing HARLEQUIN DUCK showed up a while back and stuck around long enough to go see it!  Downtown Waterloo?  You got it. 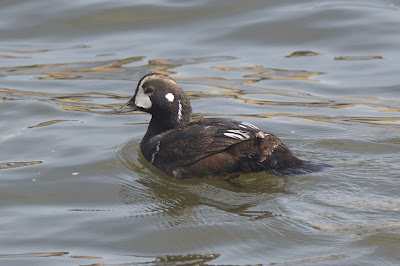 This species typically favors turbulent water and rocky shores of the northeast, northwest, and some in the Great Lakes (usually in winter).  Iowa, as you may surmise, is NOT where this kind of bird should be hanging out... and in May?  It just gets weirder and weirder.

Perhaps you think of Iowa as only corn (a lot of people do).  And there IS a lot of corn... but there is a lot of other neat stuff too.  In various grasslands throughout the area, it's not hard to stumble onto species like SEDGE WREN, HENSLOW'S SPARROW, and BOBOLINK.  This grassland icterid (related to blackbirds, grackles, meadowlarks, orioles, cowbirds, etc) is an impressive migrant too; they migrate more than 12,000 miles every year to southern South America!  This one, well, it was just hanging out in an overgrown field.  Note the yellow nape and gray/white back: 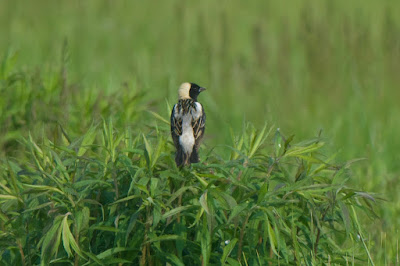 Another grassland bird, this one truly abundant around here, is the DICKCISSEL.  In Iowa, you can find these while you're pumping gas at Casey's or Kum & Go (true story!).  Despite their abundance, their song is a quintessential sound of Iowa to me and one that always tells me I'm looking at grasslands.  Take a listen:
And hey, they're rather attractive too: 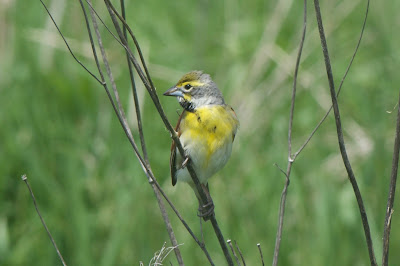 Another bird of open areas is the BLACK TERN and thankfully these attractive marshbirds haven't been too hard to find locally.  This photo, which doesn't show much of the tern, is fascinating to me though; you're seeing a tern banking hard to snap up the big juicy fly in the lower part of the photo.  Yum yum! 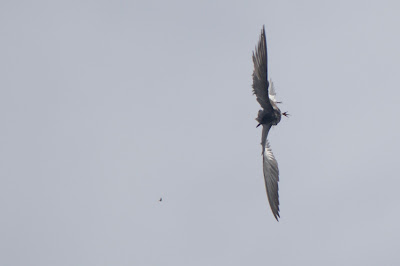 While we're in the theme of open areas, I took this photo of a MEADOW FRITILLARY while we explored a park in Grundy County.  However, you can see that it was feeling a bit shy (or windblown) and wouldn't spread out all nice-like.  Oh well. 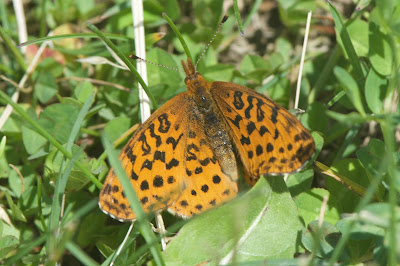 However, the woodlands that Iowa has probably get overlooked.  We were exploring a park near Waterloo when we tucked inside the woods on this side trail which plopped us in a very picturesque setting: 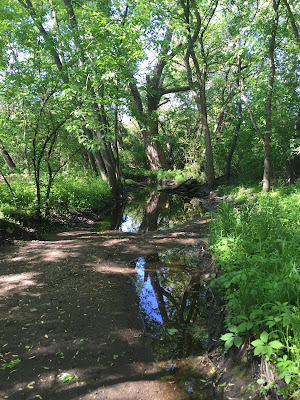 The muddy and shady creek bed was a haven for NORTHERN WATERTHRUSHES of which we saw several.  The sounds of EASTERN WOOD-PEWEES and LEAST FLYCATCHERS filtered through the trees.  A short time later, this young RED FOX came up to inspect us.  It was a beautiful animal: 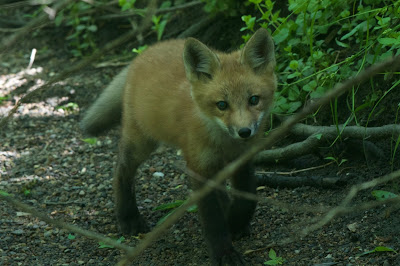 Lately, the sounds filtering out of the woods tend to be those of breeding species; many of the other migrants have already passed us by.  The most common woodland nesting warbler here (in my opinion) is the AMERICAN REDSTART.  Although this black-and-orange warbler has been abundant for us, this one didn't necessarily feel like perching out unobscured: 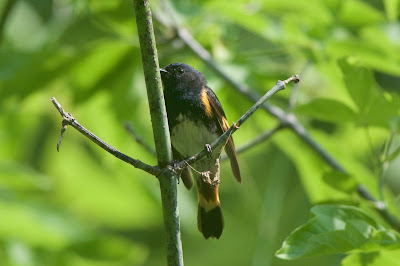 Another midwestern spring/summer highlight for me are cuckoos.  A check of a local bird sanctuary was the right move when we realized how many cuckoos were flopping about.  We ended with nearly 20 different cuckoos!  The highlight for us was seeing 3 different BLACK-BILLED CUCKOOS, the less common of the two.  At one point, we managed a tail-only view of one of them: 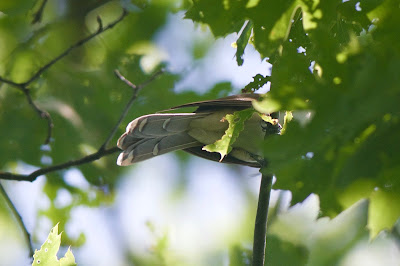 The tail is all you need to be able to differentiate between the two species too; BLACK-BILLED has smaller white spots on the underside while YELLOW-BILLED has much larger white spots.

We managed other views of BLACK-BILLED although my photo didn't turn out that great given the height of the bird and the harsh lighting: 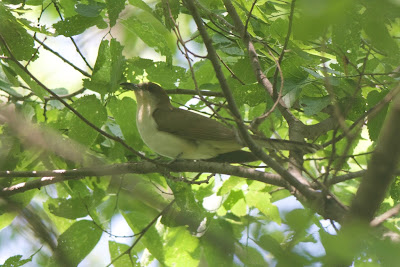 And then sometimes you find birds where you don't expect to.  Here's a WILSON'S PHALAROPE that was hanging out with some CANADA GEESE on the mowed grass at a local park! 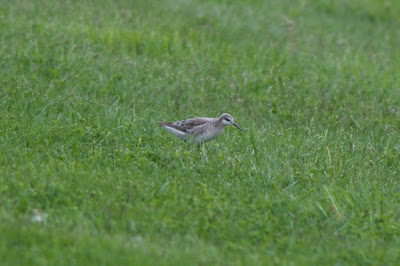 Lastly, you have to remember through all of this though that I spent my time in Iowa in the dark ages (before I started using eBird).  Subsequently, so many of my county lists and state numbers are lacking to this day because of that.  Still, there's only one direction to go and that is forward... it was time to explore some new counties!  So far, we've been able to snag more than a half dozen new ones.  I'll leave you with this updated Iowa map:
Posted by Cory J. Gregory at 5/28/2016 06:28:00 PM