I was fortunate to recently help with a Field Guides tour to the Big Bend region of west Texas.  Together with veteran guide, Chris Benesh, we ventured into the remote but beautiful country of Big Bend, the Davis Mountains, and the Hill Country that makes Texas so popular with birders.  I'll do a quick recap of the trip (via 3 posts) here on my blog together with some photos I snapped along the way.

The trip began in San Antonio but after some travel issues (the San Antonio airport shut down!), we were finally on our way west towards the Rio Grande.  We birded around Del Rio the following morning which made for a great introduction to the birds of south Texas.

It was here that we had our first taste of THE common bunting of the trip, the aptly-named PAINTED BUNTING.  We put a scope on this singing male and enjoyed its warbled song: 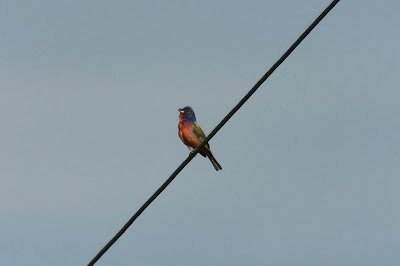 New birds for the trip came fast and furiously.  OLIVE SPARROW, check.  GREAT KISKADEE, check.  The somewhat demonic-looking BRONZED COWBIRD, check.  In truth, it was a very very birdy morning!  Whether it was the GREEN KINGFISHER that we all had great looks at, the BROWN-CRESTED FLYCATCHER calling from the tangles behind us, or the many YELLOW-BREASTED CHATS singing and cavorting from the roadside tangles... we all had a good time.

Just down the road (and literally on the banks of the river) we enjoyed our first shorebirds of the trip (SPOTTED SANDPIPER and a few LESSER YELLOWLEGS).  Overhead, we watched as some squeaking BLACK-BELLIED WHISTLING-DUCKS flew over, a CRESTED CARACARA lazily crossed over the border, and a slew of PURPLE MARTINS flew around their house in a frenzy.  Here's an adult male: 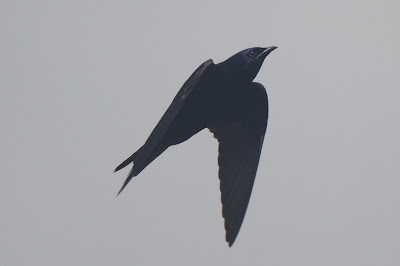 However, one of the main highlights in Del Rio was this WHITE-COLLARED SEEDEATER that gave a great show as he sang over his patch of cane! 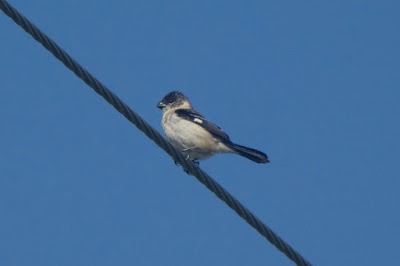 For me, it was quite a surprise to learn that this Code 3 species can be found that far north (roughly the same latitude as Houston!).

We eventually left Del Rio and continued west but paused for a birding stop at the Pecos River high bridge.  It's really a scenic view (if you can ignore the chain-link fence in my photo!): 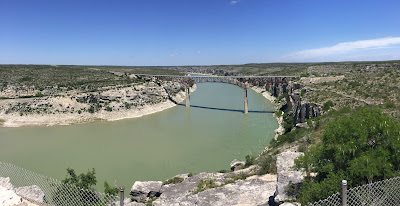 Although it was a warm afternoon, the CASSIN'S SPARROWS were in full song in the dry grasslands, the WHITE-THROATED SWIFTS tore through the blue sky in pursuit of food, and songs of CANYON and ROCK WRENS tinkled down the canyon walls.

Of course, our real destination was Big Bend National Park!  We finally arrived and got settled into the Chisos Basin lodge.  Before long, the next morning took us up one of the canyons in pursuit of specialties like GRAY VIREO and LUCIFER HUMMINGBIRD.  As we set out on our hike, one of the first birds we saw was this OLIVE-SIDED FLYCATCHER perched up on an ocotillo: 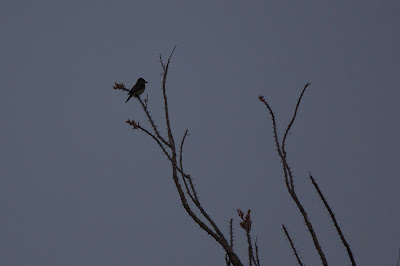 The scenery on this hike was fantastic!  Here you can see our path was essentially an old riverbed at the base of some canyon walls: 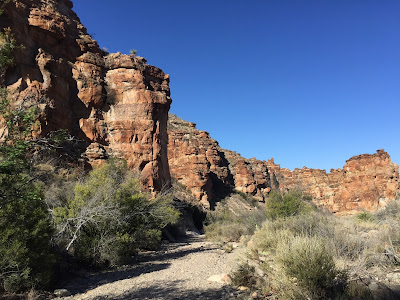 In looking down the canyon, it didn't take much to realize we weren't in a lush landscape with lots of excess water!  Still, it was beautiful: 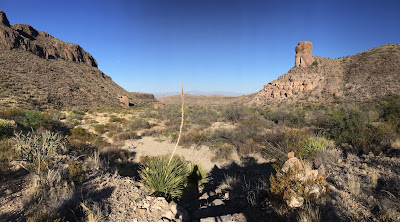 We started seeing some desert species on this hike and we all enjoyed views of VARIED BUNTING, BLACK-THROATED SPARROW, RUFOUS-CROWNED SPARROW, and even some SCOTT'S ORIOLES.

We did eventually track down a GRAY VIREO or two along the valley slopes although looks were brief for most.  However, another target of ours really put on a show... the rare LUCIFER HUMMINGBIRD: 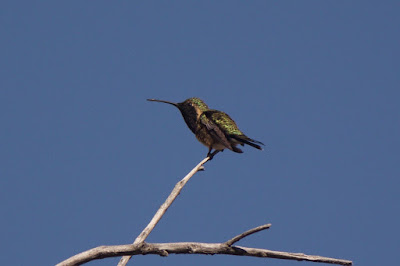 Not only did we ogle that one perched out in the open for everyone to see, but we managed even more!  Here's another on a different perch! 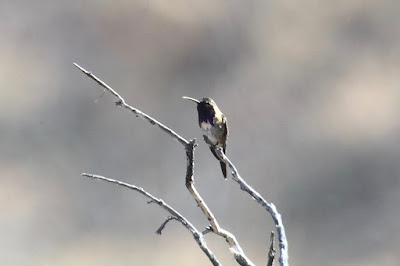 This species is usually seen by birders at a few feeders in southeast Arizona.  However, the range of this species slips up into the Big Bend region and we all enjoyed this nice addition to our Texas lists.

Moving on to a different location... although my picture isn't great, we also scored the endangered BLACK-CAPPED VIREO in Big Bend NP as well.  We thoroughly enjoyed it as a pair worked their territory below us: 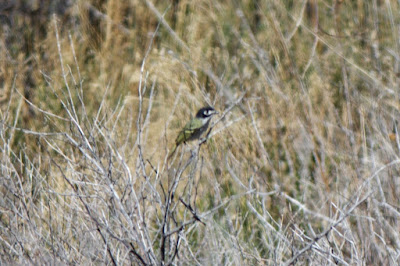 This rare vireo species is one of the main attractions to central Texas and we were all overjoyed to have had such a nice encounter with them within the first couple days of tour.

Much of the birding in the dry Big Bend region comes down to finding the right oasis.  For example, we visited the Dugout Wells oasis one hot afternoon and still managed about 20 species.  Highlights included another OLIVE-SIDED FLYCATCHER, a rather hot-looking YELLOW-HEADED BLACKBIRD, a couple SCALED QUAIL (which we later coined as "Squail"), several VERDIN, a quick SCOTT'S ORIOLE, and even this PYRRHULOXIA being chased by its close relative the NORTHERN CARDINAL: 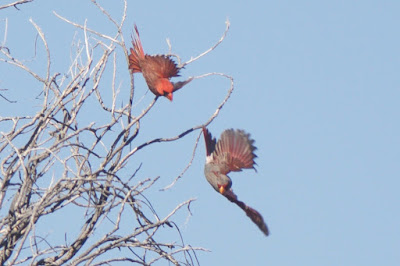 Quite numerous here were the BELL'S VIREO giving their husky, chatty, and distinctive songs from well inside the dense thickets.  Still, every once in a while even a Bell's gets curious: 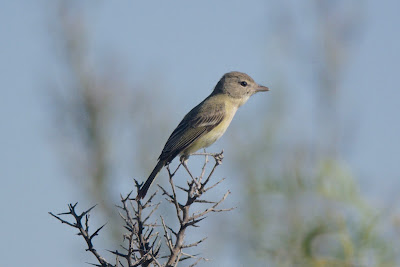 The next morning we visited a different oasis, this time the cluster of trees/houses known as the Rio Grande Village.  Situated right on the bank of the river, this was a lush environment full of cottonwoods and a plethora of different birds.  Here is the river view with the US on the left and Mexico on the right: 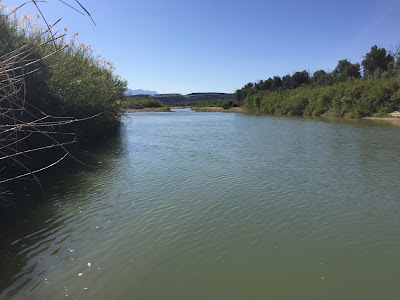 One of the stars of the show that morning was the pair of COMMON BLACK HAWKS that nest there.  This visit was no exception and we quickly found this unique raptor perched in some bare branches near its nest: 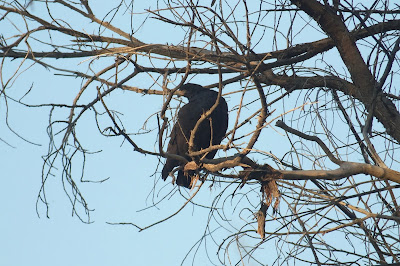 It wasn't uncommon to see me aim my camera downwards once in a while to snap a photo of a butterfly or dragonfly.  In this case, I took a couple of images of this butterfly known as a FATAL METALMARK: 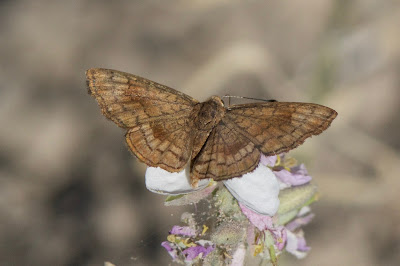 And although they're tiny, the REAKIRT'S BLUES were both abundant and quite tame for photographing! 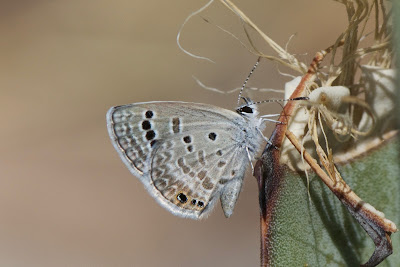 Perhaps the nicest surprise at the Rio Grande Village was a visit to a nest hole hosted by Mr. ELF OWL himself.  Peering out at us like Oscar the Grouch, we all enjoyed seeing this nocturnal species during the day! 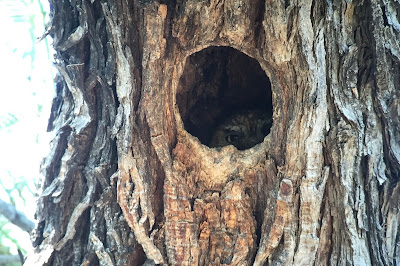 We had thoroughly enjoyed the first couple of days of birding in Big Bend National Park... but there was something in the back of all of our minds.  Yes, it was the lengthy hike up to see the COLIMA WARBLER.  This trek was scheduled for the next day... so stay tuned to the blog to see how that turned out!
Posted by Cory J. Gregory at 5/06/2016 08:02:00 PM