After we departed Big Bend, we headed north for the Davis Mountains.  The Davis Mountains are located near Fort Davis (after which they are named) and are volcanic in origin.  The vegetation, like many of the other sky island ranges of west Texas and Arizona, includes dry montane grasslands in the lower elevations and pine-oak woodlands higher up.  The key to that sentence is where I mention the dry grasslands!  Yes, our goal for the Davis Mountains was to look for MONTEZUMA QUAIL.

Although they can be secretive at the best of times, most of our group were eventually successful in finally seeing a couple of quail slinking through some grass the following morning.  However, pictures of those didn't materialize.

Although our visit to the Davis Mountains was brief, we added a slew of new species for the trip including PHAINOPEPLA, WESTERN WOOD-PEWEE, BLUE GROSBEAK, GREEN-TAILED TOWEE, and another ZONE-TAILED HAWK.

Our next birding stop was Lake Balmorhea in Reeves County, a true oasis in an otherwise dry landscape.  After spending many days in the desert, we enjoyed a new and abundant variety of waterbirds and shorebirds.  For example, we stumbled on this WHIMBREL straightaway: 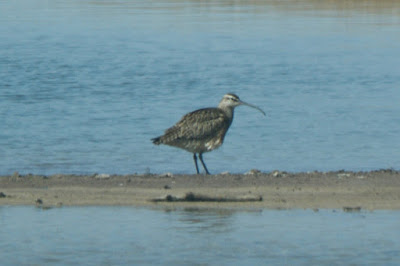 More expected in this region are AMERICAN AVOCETS and BLACK-NECKED STILTS; here's one of the latter hanging out in one of the marshes: 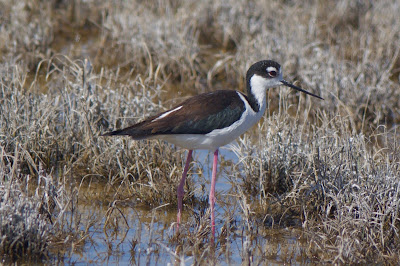 We spent our last leg of the trip at Neal's Lodges in Concan (this is about an hour and a half west of San Antonio).  This area, known as the Hill Country, is well-known for a couple of things... GOLDEN-CHEEKED WARBLERS, BLACK-CAPPED VIREOS, and sometimes TROPICAL PARULA.  Eager to track down some new and exciting birds for the trip, we ventured to Lost Maples SNA one morning and fell completely in love with what it had to offer.

First and foremost, it's a superb place for the rare and endangered GOLDEN-CHEEKED WARBLER which we eventually got nice looks at through the scope.  This species nests only in juniper-oak woodlands and in only one state... Texas!

We had a nice variety of other species too though.  Think of a place where CANYON WRENS mix with CAROLINA WRENS, where LOUISIANA WATERTHRUSHES mix with SCOTT'S ORIOLES, where a GREAT KISKADEE can be seen while you're listening to ACADIAN FLYCATCHERS, where nesting YELLOW-THROATED WARBLERS mix with HUTTON'S VIREOS.  You get the idea!  It was truly amazing and unique birding experience.

The bugs weren't half bad either!  Here's a GRAY HAIRSTREAK that was quite a stunner in the sun: Back at Neal's Lodges, we eventually tracked down another target, a Code 3 TROPICAL PARULA that has been on territory there this spring.  See if you can spot it in this photo: 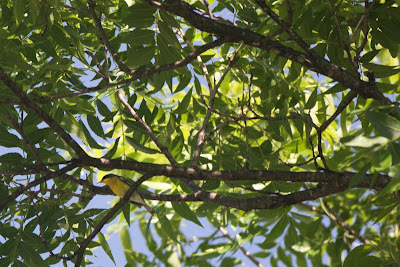 The lodges themselves were pretty fascinating.  Behind the restaurant were a series of hummingbird feeders that almost always had flocks of BLACK-CHINNED HUMMINGBIRDS in attendance: 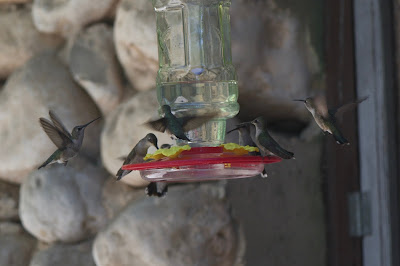 They were tame too; Jo was able to hold the feeder at close range and enjoy the spectacle in an up-close-and-personal way! 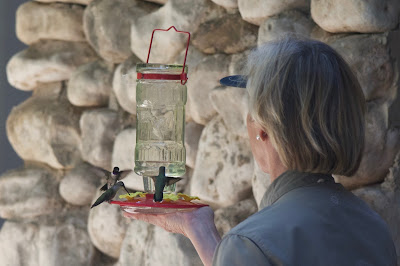 At one point, a couple of us ventured to the bathroom area because there was this interesting moth sitting on the door: 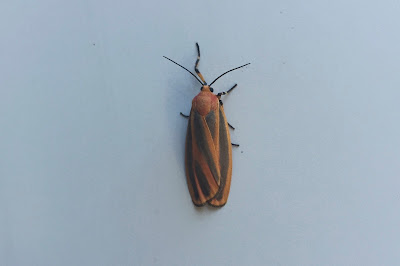 Although I'm no expert, I went ahead and snapped a picture.  Turns out, it's a Painted Lichen Moth (thanks to my friend, Aaron, for his id help).

There was one particular butterfly that really enjoyed the area behind the restaurant too.  It's a TAWNY EMPEROR: 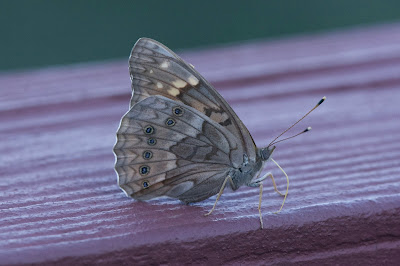 You can see the lack of black eyespots on the forewing which the similar Hackberry Emperor would show.

During one of our afternoon siesta breaks, I wandered the grounds and had a nice talk with this BROWN-CRESTED FLYCATCHER.  Note that the rufous down the middle of the tail reaches the tip (instead of having a dark tip like Ash-throated): 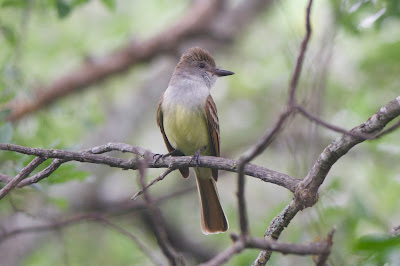 This species belongs to the Myiarchus genus along with species like Great Crested, Ash-throated, Dusky-capped, and many others from farther south.  However, this species has two distinct subspecies that can be found here in the US.  First, the BCFLs of southern California, Arizona, and New Mexico are Myiarchus tyrannulus magister and they have a longer, thicker bill than other races.  The race that ranges into southern Texas is Myiarchus trannulus cooperi and they're smaller overall with a smaller bill.

I stumbled on this butterfly on that same afternoon stroll.  It wasn't until a bit later that I realized it was actually a lifer for me, an OAK HAIRSTREAK (Satyrium favonius): 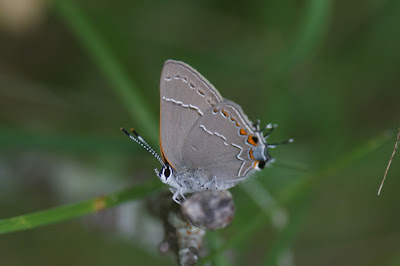 Before we knew it, our last full day was upon us!  We loaded up once more and headed out for some morning birding.  On our way to our first birding stop, the first van spotted this RINGED KINGFISHER on a power line! 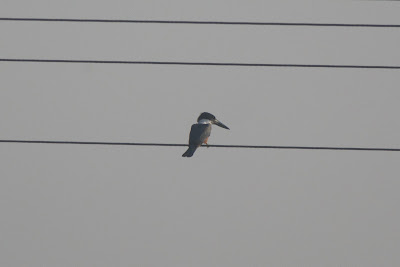 This species, the largest of our kingfishers here in North America, ranges into south Texas and we were about as far north as you can expect to find them.  But did you know that this species ranges south to the southern tip of South America?  An interesting notion considering they're limited to the warm, tropical regions of the US.

Farther down the road, we enjoyed an overload of southern prairie/scrub species like DICKCISSEL, NORTHERN BOBWHITE, SCISSOR-TAILED FLYCATCHER, and even some FIELD and GRASSHOPPER SPARROWS.

Here's a NORTHERN BOBWHITE that not only showed itself, but sat contently on a fence.  We rolled up on it smooth like a Cadillac and I did a Nikonized drive-by shooting.  BANG!  (It didn't mind a bit): 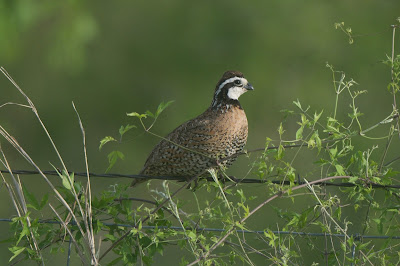 It's hard to dislike any bird with a tail as crazy as this!  This SCISSOR-TAILED FLYCATCHER chose the wrong kind of fence to hide behind; I can still focus on you! 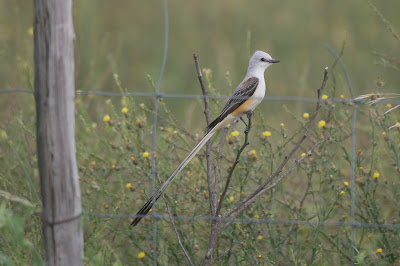 Although our tour was all but complete, we save a special event for our very last night of the tour.  We ventured to the Frio bat cave for the nightly mass-exodus of Brazilian Free-tailed Bats!  Yes, you might not be interested... or you might even be creeped out.  But let me say that it's really quite remarkable; I had no idea what I was missing.

Here's a view of the cave, a low, oblong fissure: 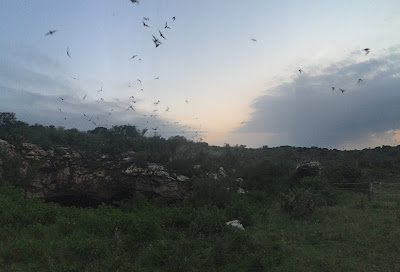 You can see the bats were starting to stream out.  Pretty soon, the stream of exiting bats was so mind-boggling that you kind of just had to stand in awe and look up: 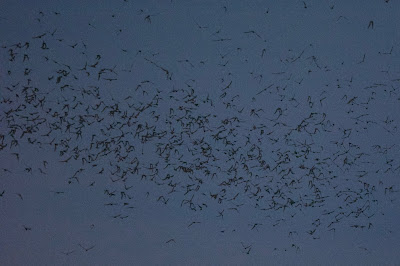 They formed these dark pulsing lines into the distance, super highways of millions of bats.  Yes, millions.  It's been estimated that 10-12 million of these bats exit the cave every night.

This spectacle doesn't just attract the attention of humans though!  There is a resident RED-TAILED HAWK that has perfected the art of picking bats out of the mix in mid-flight: 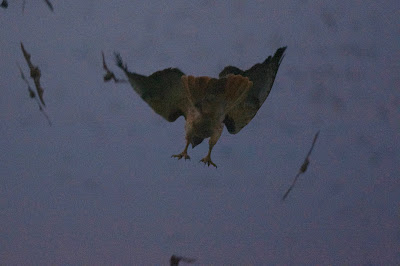 We watched this hawk catch several bats and with a pretty high success rate too! 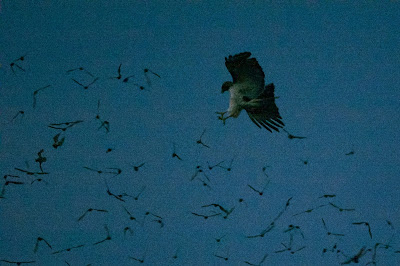 After it became too dark to see the bats, we switched to birding mode again and enjoyed some nightbirds on the way out like CHUCK-WILL'S-WIDOW, COMMON POORWILL, and EASTERN SCREECH-OWL.

Sadly though, our tour had come to an end.  We had enjoyed a wide range of habitats throughout Texas and with that came a wide range of birds.  We managed a respectable ~214 species for the trip including great success with our targets.  Thanks to those who made this such a fun trip!
Posted by Cory J. Gregory at 5/09/2016 03:12:00 PM