In the days after my return from Texas, I've been focusing my birding on a much smaller area.  In fact, Ashley and I are usually content to bird the property we're on in northeast Missouri.

At this point, I'm wondering if we should name it "The Preserve" or something.  It's about 18 acres; a third of it in mature forest and the other two-thirds in grassland.  Together, including some of the bordering fields and scrubland, it's lush and productive birding!

For example, May 8 turned out to be an epic day for us.  We got ready for our morning walk with our eBird app open and ready for mad business.  The problem was that as soon as we exited the house, we were completely blown away by the number of birds singing.  It was quite difficult to single out any of the songs.  Such a horrible problem, huh?

We picked our way through the songs and it was evident early on that this was going to crush our previous daily high-count for this spot.  By the time 9 AM had rolled around, we had already reached 70 species.  We were curious... could we reach 80 for the day?  We kept birding.

This male BLUE GROSBEAK helped our tally.  It was a bit of a surprise too; we had only seen one here once before. 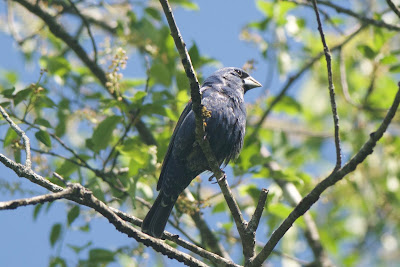 Another first-rate migrant to have around are the plain-colored GRAY-CHEEKED THRUSHES.  Generally harder to come by than other thrushes, it's always nice to have a few of these skulkers lurking in the shadows.  Thankfully, they often give their presence away with their distinctive "veeer" call notes.  Of course, photographing one of these buried in the brush can be anything but easy: 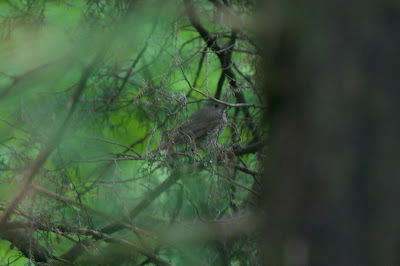 Tough to tell what it is?  The key, for me at least, is the noticeable lack of an eyering (Swainson's Thrushes have bold, buffy eyerings).

It's not an understatement to say that our yard big day was made possible by warblers.  In fact, we eventually ended the day with 23 different warbler species!  One we saw that day was the locally abundant KENTUCKY WARBLER.  Although they're common (there are 4-6 territories surrounding the house), when you want to snap a pic, they can be real gits.  This was the best I could do in the shadows: 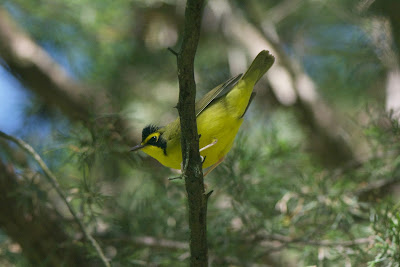 Speaking of KEWAs, here's a caption challenge.  Is there anything better than just a simple "BOING!": 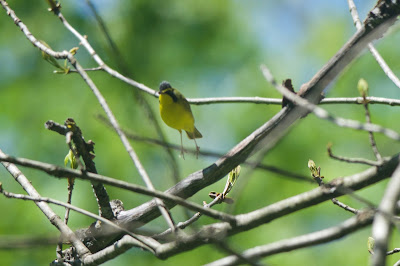 Another cracking warbler(ish) species to have around us every day is the YELLOW-BREASTED CHAT.  This is another shy species that can be rather reclusive at times but every once in a while, they'll come out to have a look around.  Note the yellow breast, white spectacles, and large bill: 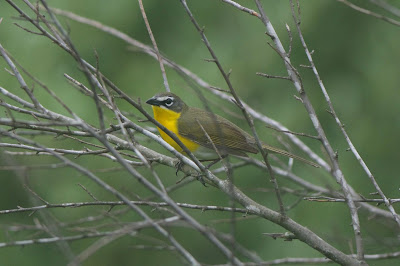 It's hard to assess which is the more abundant sparrow on the property: CHIPPING or FIELD.  Either way, the former is much more obliging! 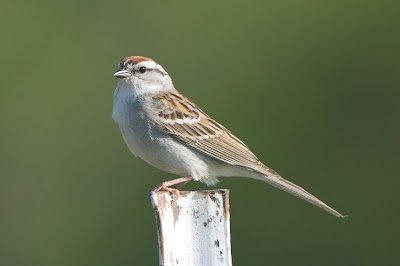 Anyway, we ended up birding for 5 hours on the property that day.  In the end, not only did we reach 80 species... we topped 90 (and all without a single shorebird or duck species)!  I'm not sure if/when we'll ever break that record but I'm guessing it won't be for a while.

With the warmer temps of spring comes an increasing variety of butterflies.  As many of you know, this has been an increasingly time-consuming hobby of mine for the last 8 years or so.  And yes, "The Preserve" has been pumping out surprises in the bug category too.  It started with this RED-BANDED HAIRSTREAK, only my second one ever: 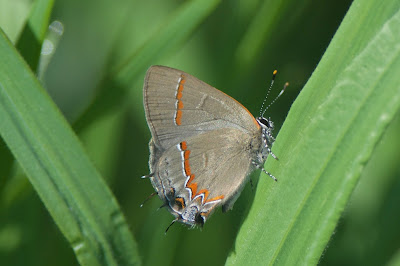 Although not really rare, we're very near the northern limit to their range; it looks like there is only one Iowa record (seen here).

The markings on the undersides of PECK'S SKIPPERS are pretty distinctive.  This one perched up in gorgeous light and I'm really happy with how it turned out: 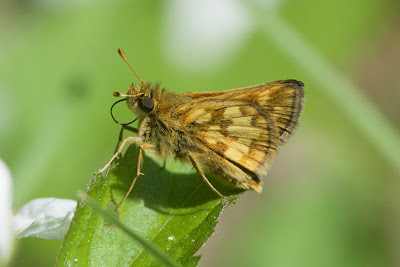 Another distinctive skipper, and an abundant one at that, is the ZABULON SKIPPER.  We have been seeing large numbers of these lately (the word "swarm" came to mind).  Here's a male perched on some veg in one of the forest clearings: 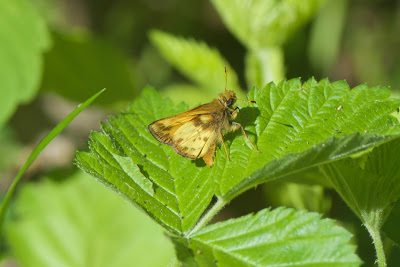 Dwarfing the two previous skippers is the SILVER-SPOTTED SKIPPER.  Although the distinctive underside isn't very visible in this picture, it's not too difficult to ID them based on size alone: 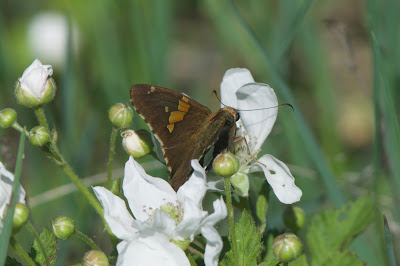 The most abundant butterfly species here right now is the EASTERN TAILED-BLUE.  Looking at the below photo, it should be obvious why it has "tailed" and "blue" in the name: 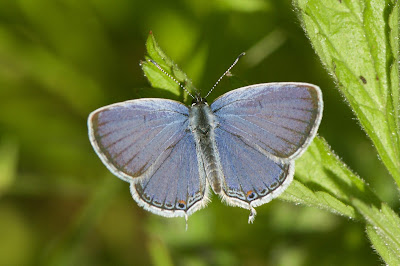 Ok, so once in a while we DO leave the property and foray out into the wilds of rural Missouri.  Yesterday, for example, we worked on our Marion County lists and visited Elmslie Memorial Conservation Area.  It was a pretty cool place although we probably didn't get there quite early enough.  We managed 53 species in about an hour with highlights including YELLOW-BILLED CUCKOO, SWAINSON'S THRUSHES, 13 warbler species including LOUISIANA WATERTHRUSH, GOLDEN-WINGED WARBLER, and BLACKBURNIAN WARBLER.  With that recent visit, Ashley and I are atop the all-time Top 100 list for that county (but the lack of eBird users there moots that point).

Afterwards we did some random exploring by driving backroads which yielded county birds like BLUE GROSBEAK, ORCHARD ORIOLE, GRASSHOPPER SPARROW, and HENSLOW'S SPARROW.  The DICKCISSELS were quite common as well: 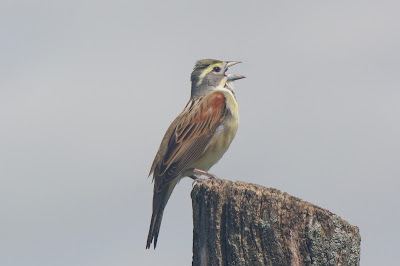 On a different day, we visited Steyermark Conservation Area near Hannibal (checklist here).  The highlight for us was, without a doubt, two CERULEAN WARBLERS singing from the treetops.  It had been 3 years since either one of us had seen this uncommon species so it was an especially nice surprise to stumble on some so close to home.

Steyermark CA also had loads of other gems like 12 warbler species including LOUISIANA WATERTHRUSH, GOLDEN-WINGED WARBLER, BLUE-WINGED WARBLER, MOURNING WARBLER, and YELLOW-THROATED WARBLER.  And, as one would guess, some ACADIAN FLYCATCHERS as well: 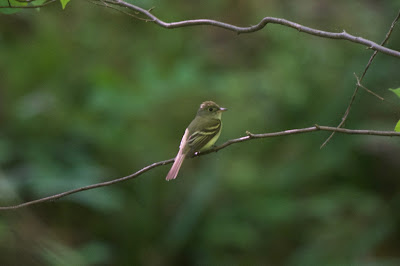 This large and green Empidonax flycatcher is found most often in mature deciduous forests of the east.  I read somewhere that this species has never been seen walking/hopping/or even perched on the ground.  Can that be true?  If so, how fascinating!
Posted by Cory J. Gregory at 5/11/2016 08:49:00 AM