A sizable chunk of my youth was spent on the lakefront of Lake Michigan.  When I lived in Berrien County in the southwest corner of Michigan, I was only a short 15 minute drive from the fun-filled beaches and sand dunes.  Actually, these were some of my darkest days.  As in a nice, dark tan!  I basically lived on the beach!  Ahhh.....

So, if you had told me a few days ago that I'd be back on the shore of Lake Michigan yesterday, my interest would have been piqued!  I was in Iowa, after all.

It started late in the day on Saturday when news broke of a WHITE-WINGED TERN that was found in Manitowoc, Wisconsin.  Hell, I had no idea where that even was.  I googled it and saw it was a city on the west shore of Lake Michigan on the far side of Wisconsin.  But I also noticed it was a short 5 hour drive there.  But was the bird legit?  I hadn't seen photos.  THEN the photos were posted.  Augh, not only was it legit, it was beautiful!  It didn't take long at all to finalize plans for leaving the next morning for the shores of Lake Michigan.  The chase was on.

As we sped towards the rising sun in the morning, we started seeing positive reports coming in via eBird and listservs.  Things were looking good!  Either we'd get it, or we'd miss it by minutes.  Could be an epic snag... or an epic fail, we had no way of knowing.

Fast forward 5 hours... we pulled in, got our gear ready to go, and headed out to the impoundment on the north side of the Manitowoc Harbor area.  A crowd was gathering and rumors were swirling that the bird should be around still.  Here was our view of the flats: 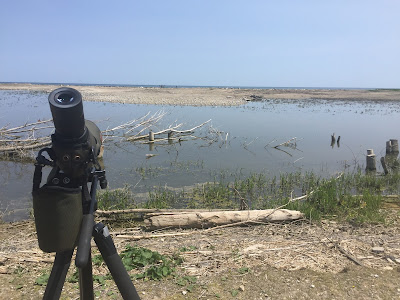 Yep, LOTS of birds were loafing out there, mostly BONAPARTE'S GULLS, CASPIAN TERNS, and COMMON TERNS: 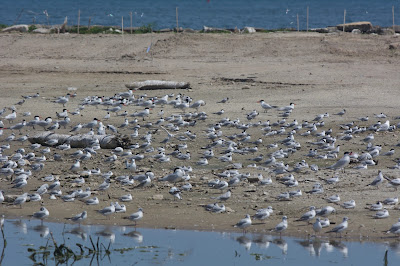 So we started scanning the flock of white birds for a black one with white wings.  Simple, right?  Well, I'd be lying if I said it took us more than 5 minutes to find the bird on our own!  Yep, the WHITE-WINGED TERN was loafing there amongst the hundreds of birds: 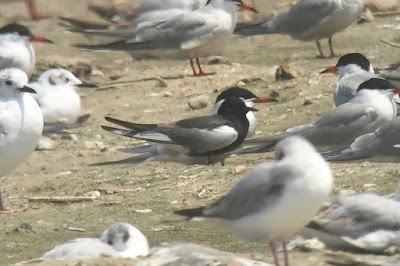 Success!  We took a deep breath in to calm our minds.  Our chase wasn't in vain.

We got to enjoy the tern through our scopes for quite a while.  It would occasionally take flight, fly out to the big lake, and disappear for a while.  But it always came back pretty quickly and would stick out like a sore thumb with the other gulls and terns.  Here's a crummy look as it flew off at one point: 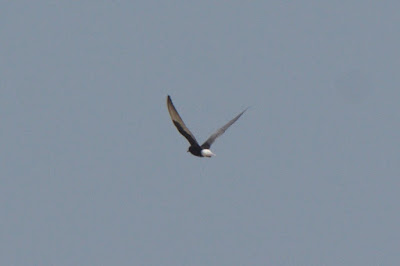 This bird is, well, rare!  It's expected in places like Europe, Africa, Asia, and Australia.  But here in the ABA area?  Nope, it's a Code 4.  Wisconsin, funnily enough, has a record already (but from 1873.  That bird, as it so happens, was shot by Mr. Kumlien himself.)  Lucky for us, this particular WWTE showed up in the interior of the US... not something that happens very often.  You see, this species shows up on the East Coast from time to time and also western Alaska... but one hadn't been seen in the interior of the US in about 20 years.

Oh, did I mention that we weren't alone in looking for this lost tern?  Here's the gathering of ~30 birders that were present at the scene: 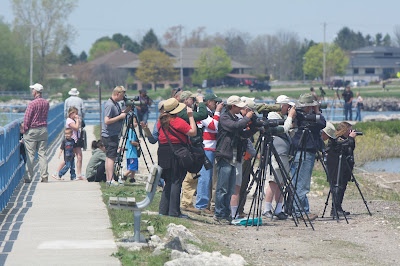 In truth, there were a lot of other fascinating and subtle things out in the impoundment besides the mega rarity that had everybody "ooh"ing and "ahh"ing.  For example, there were at least 2 LITTLE GULLS yesterday including this subadult: 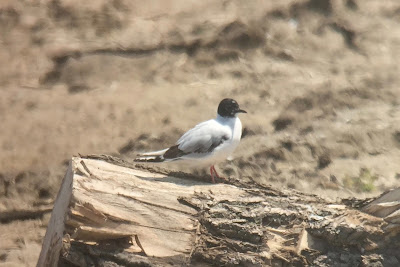 Although these tiny gulls breed at a few spots here in the ABA area, they're considered a Code 3 species (the same code as low-level vagrants).  It wasn't our main target but it was a fine addition to our "up-and-coming" Wisconsin lists.

The main cohort of terns and gulls weren't shabby-looking either.  Here's a CASPIAN TERN flying by, accentuated by its red bill, black cap, and dark underside to the primaries: 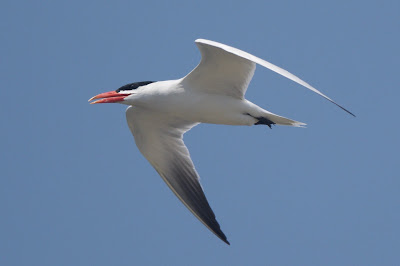 But did you know that Caspian Tern is the largest tern species in the world?  If not, now you do!

Certainly not as big, although more numerous, were the COMMON TERNS that littered the beach and airspace above the impoundment.  Common indeed, they fulfilled their names that day.  Here's one zipping past: 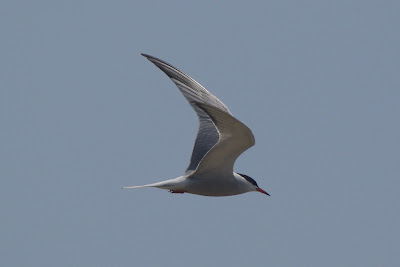