The big day was finally here.  Many, if not all, of the birders on our trip came hoping to see the COLIMA WARBLER.  After all, Big Bend National Park in west Texas is the ONLY place in the ABA area that birders can hope to see this denizen of oak-pine canyons.  The problem is... you gotta hike for it!

Yes indeed, if you've seen this bird, you're in an elite bunch of birders that were willing to make the trek (some people refer to it as a "death march") up to roughly 6000 feet in Big Bend National Park.

Below you can see our route; it may look like gibberish now... but believe me, when you hike it, you are tuned in to exactly where you are (and how much farther to go!): 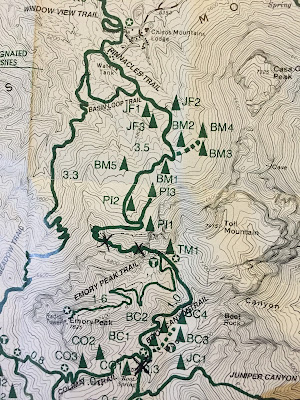 We were ready though.  After a quick breakfast in the dark, we set out at about dawn and started the long, gentle approach to the ridge.  It was a cool morning though so we all appreciated not being overheated!

We took the climb slowly but it was hard to go fast when we had scenery like this behind us! 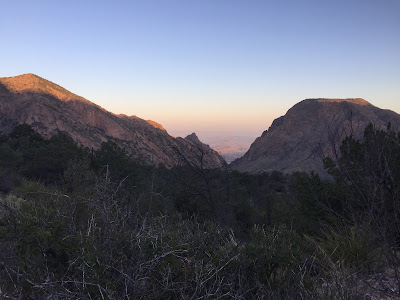 Besides, we saw lots of fascinating things on the way up.  For example, here is Echinocereus triglochidiatus, a kind of hedgehog cactus.  Apparently it has several common names such as Claretcup, Kingcup cactus, or Mojave mound cactus.  Whatever name you choose, it was quite vivid even in the morning shade: 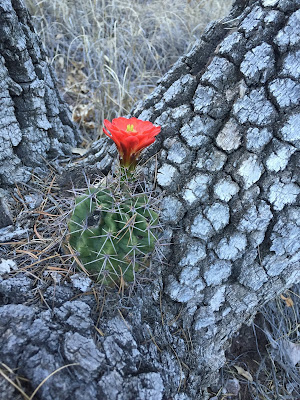 The Pinnacles Trail soon started getting a bit more serious though and we focused our attention on the terrain ahead: 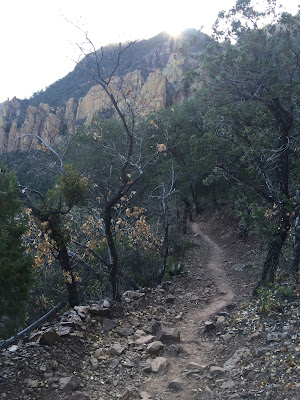 We were approaching the ridge but we hadn't heard even a peep out of our target warbler.  Hmm. However, Chris soon called out that he heard a singing Colima ahead!  We scurried forward and, lo and behold, a COLIMA WARBLER was singing at eye-level!  Success!  All 15 of us that made the hike were looking at this Mexican specialty bird of Big Bend: 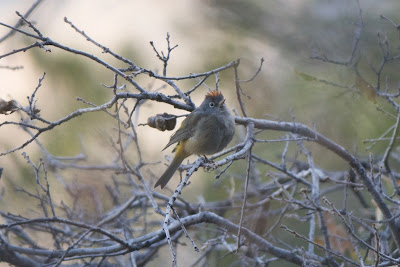 You can see the white eyering, orange cap, and yellow rump/undertail.  It perched there and sang for many minutes.  We were all on cloud nine... and at about the right elevation for clouds too.

So when 15 happy birders get together on a mountainside to celebrate a lifer, why not snap a picture?!  Here's our fantastic group: 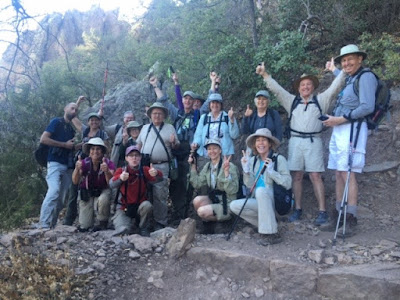 After the bird moved on, we all had to decide what to do.  Some folks turned back towards home while others, myself included, continued up and over the ridge to see what Boot Spring had to offer.  Once we crested the ridge and started down the other side, it was starting to be a nice, warm day: 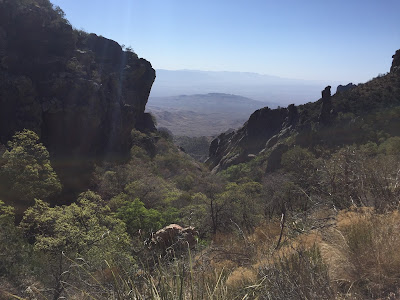 Once we arrived at the pleasant (and shaded!) Boot Spring, we sat down for a quick lunch break.  However, we were rather distracted!  We found several more COLIMA WARBLERS and a few that even perched for some photos: 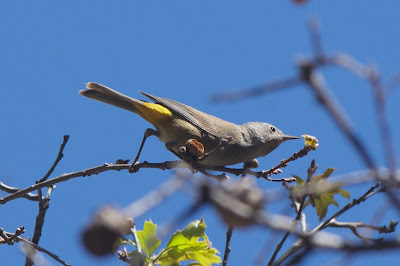 This one looked down at the emptiness beneath it and seemed to say "Woah, I hope I don't fall": 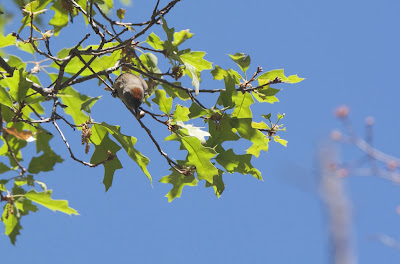 Perhaps the biggest surprise of the Boot Spring area was a calling DUSKY-CAPPED FLYCATCHER that we heard when we arrived.  Although we looked for it, we never could find it for photos (it's a pretty rare species for there).

We saw several other species in the area though that call that particular island-in-the-sky home.  We had a couple of CORDILLERAN FLYCATCHERS, a PAINTED REDSTART or two, HUTTON'S VIREOS, and even some BLUE-THROATED HUMMINGBIRDS: 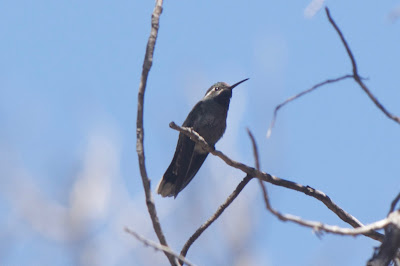 The Blue-throateds are brutes, too.  On average, they are our largest hummingbird species in the US!  We also had fleeting glimpses of another species of hummingbird that can be found in the mountains there, the small BROAD-TAILED HUMMINGBIRD.  However, they didn't stay still for anyone.

Before long though, it was time to descend.  Because this part of the hike occurs in the heat of the day, we didn't spend a lot of time sight-seeing.  I did pause for this BLUE-GRAY GNATCATCHER though; it looked surprised that hikers were out in the heat: 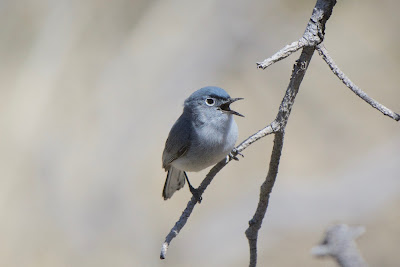 In the end, I really enjoyed our time at Big Bend.  For example, the rich light from our last evening illuminated the mountains surrounding the Chisos Basin where we stayed: 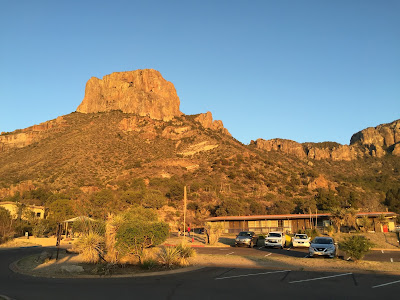 The next morning was our last at the park but we wouldn't leave without... you guessed it, more birding!  Indeed, we visited a different oasis "on our way out".  The vibrant VERMILION FLYCATCHERS were abundant as always including this gleaming beacon perched up high in some mesquite: 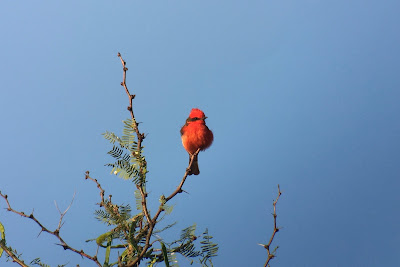 As we said our goodbyes to the desert, this GREAT HORNED OWL was one of the last to see us off: 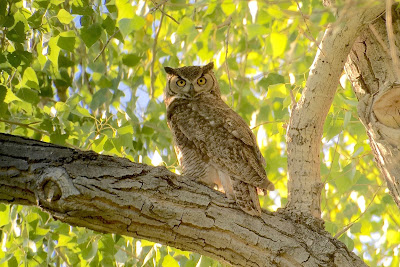