I suppose now that it's June, the general lack of migrants filtering through northeast Iowa is to be expected.  The woods are much quieter now and the birds you do hear are probably summering species.

One of those that comes to mind is the AMERICAN REDSTART, a common warbler species that breeds throughout much of North America.  The males are downright flashy too: 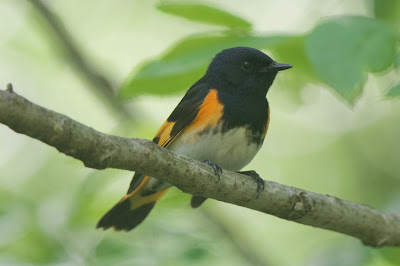 However, if you're lucky, you might chance into one or two last migrants.  For example, Ashley and I were birding at the Cedar River NRA southeast of Waterloo when we heard a CANADA WARBLER singing.  Plugging it into our eBird checklist on our phone app, it was flagged due to it being a little late in the season.  So we stuck with it and managed to back it up with a photo: 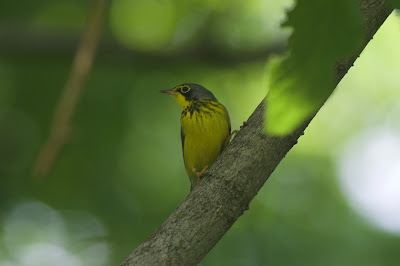 Another very late migrant is the secretive MOURNING WARBLER.  We heard a couple of males chanting their low-pitched songs in the past week, often singing from thick brush along creeks/rivers.  Here's one near Martin Lake that we actually managed to see for a split second: 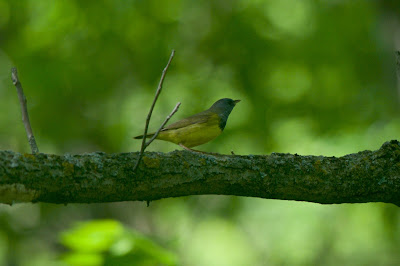 Speaking of creeks, some of the waterways here in northeast Iowa are quite lovely.  Here's a panoramic view of the lazy Black Hawk Creek, one of the spots we heard a MOURNING WARBLER:

Looking at the above picture again, I can remember standing there listening to many of the common forest birds like ROSE-BREASTED GROSBEAK, SCARLET TANAGER, INDIGO BUNTING, YELLOW-BILLED CUCKOO, and EASTERN WOOD-PEWEE.  Of course, hearing these species is easy but seeing them is often much more difficult.  After all, with all the bright colors that the grosbeaks, tanagers, and buntings display, they need to keep a low profile if they want to avoid getting snagged by predators.

Let's go to the other side of the color spectrum.  The following species breeds in grasslands and weedy fields here in Iowa.  It's named after a botanist, one that actually taught Charles Darwin.  Any ideas? 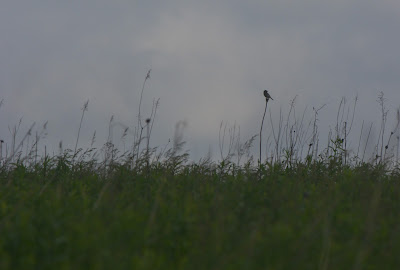 The name of that botanist was John Stevens Henslow.  Ahhh!  This is indeed a HENSLOW'S SPARROW... a particularly bold one that didn't mind perching on the tallest perch it could find (they often are quite secretive).

One day Ashley and I were driving south to do some county birding (yes, I've snagged a bunch of new counties here in Iowa lately) when we got an email from the birding listserv saying that a SNOWY PLOVER had been found.  Knowing that Ashley and I both needed this casual vagrant as a state bird, we looked at where.... it was only 15 minutes away from where we were on the interstate!  Easy decision, time for a detour.

Of course, we hadn't a clue exactly where to view the bird and although we DID end up finding it, it was about a quarter mile away.  Oops.  Through the heat shimmer, I took a truly ghastly series of photos through my scope.  If you use your imagination, here's one showing the very pale plover: 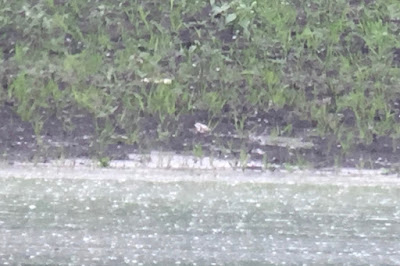 We couldn't complain though, this was a bonus state bird that neither of us expected to see.  The Snowy Plover breeds as close as Kansas but very uncommonly wanders into Iowa.

With the onset of warmer temps and fewer species of birds to ogle, I often turn my attention to insects.  Although I haven't been doing a very good job at targeting interesting species, I'm still happy to capture what shows up in front of me.  Case in point, this EBONY JEWELWING is a flashy species of damselfly that's common near wooded streams: 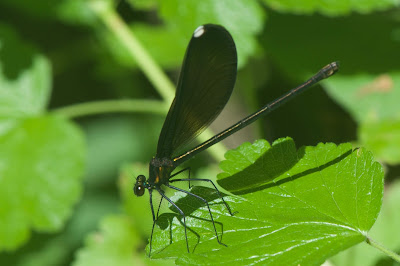 See the white spots on the tips of the wings?  This is a fieldmark of a female; males have all black wings with no white spots.

The following ISN'T a damselfly though, it's a dragonfly (although both are in the same order).  This particular one is the aptly-named COMMON WHITETAIL: 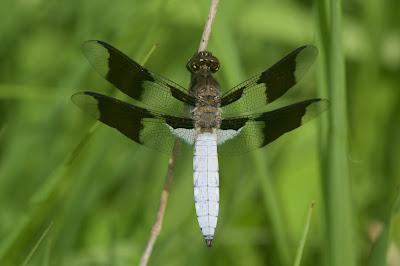 Pretty snazzy when you stop to look at it, huh?

Turning to butterflies for a few images, it's hard to go wrong with the large and brilliant RED-SPOTTED PURPLE in nice light! 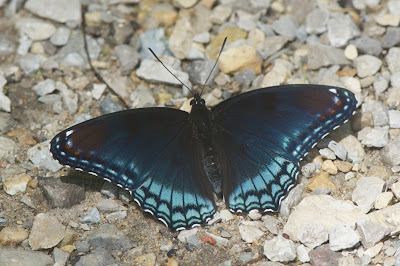 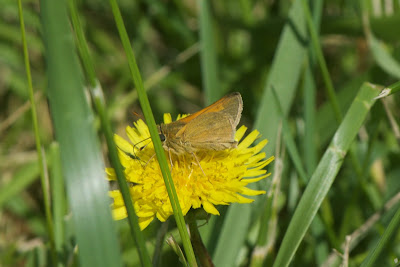 This is a TAWNY-EDGED SKIPPER, a common butterfly in these parts (although this was my first of the year).  The skipper eventually opened its wings to warm up from the sun: 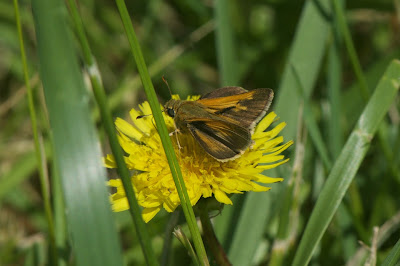 Anyway, with that, my blogging will be complete for a bit.  I'm headed to the other side of the country soon so stay tuned for pictures and some narrative.
Posted by Cory J. Gregory at 6/02/2016 09:25:00 AM