I wouldn't really consider us Iowans but Ashley and I DID live in Iowa from 2009-2011.  So when we decided to drive north to Iowa to see family and to bird, it was a bit strange to be "going home".

After a fun time visiting family (including two rambunctious nieces), we headed to central Iowa to look for a couple of things.  For some reason, the species that was at the top of the list for me was SMITH'S LONGSPUR, a species I hadn't seen since 2013 (2011 for Ashley).

This brightly-patterned species breeds in the high-arctic of Canada and Alaska but winters completely within a group of 4-7 states in the southern Great Plains (mostly Texas, Oklahoma, Arkansas, and Kansas).  Every spring they shoot north and stopover in states like Missouri, Iowa, Illinois, Indiana, and a few others.  However, in my experience, this is one of the toughest Midwestern birds to see well.  Even when they're in the field in front of you, good luck in seeing them unobscured and out in the open.  How can a bird disappear in such short grass so well?!

So it was with great interest that Ashley and I visited Dunbar Slough in Greene County to see the flock of longspurs that was staging there.  It didn't take long in walking through the grass stubble field before we started kicking them up.... LOTS of them.  Here's one showing the striking white patch in the wings and orange undersides: 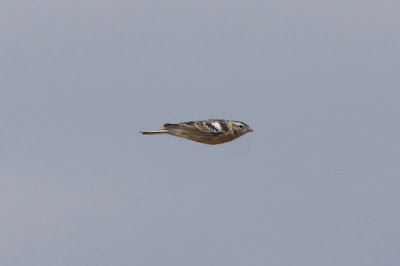 In the end, I estimated about 150 Smith's were present.  It was so cool to be surrounded by these secretive longspurs, something that probably not too many birders get to experience!

After slowly stalking several longspurs that were scurrying about, I eventually ended up with a few photos of a male: Note the orange belly, breast, and throat (the only longspur to have an orange front).  Also the striking black-and-white pattern to the head.

In checking my records in eBird, this was only the 8th time I'd seen this species in my entire life.  Geographically-speaking, 6 of those 8 times were in Iowa while the other 2 were in Kansas (in fact, I saw my first Smith's in Kansas back in 2007).

Besides the longspurs, Dunbar Slough had some other migrants and newly-arrived breeders around as well.  For example, I heard this awful screeching sound just to remember that YELLOW-HEADED BLACKBIRDS breed around there.  Sure enough, we spied this distant male setting up camp in the cattails: 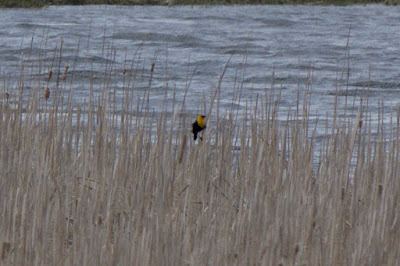 There were some mudflats on 270th Street that yielded 6 shorebird species including BAIRD'S SANDPIPERS, both GREATER and LESSER YELLOWLEGS, and these 3 DUNLIN (flagged in eBird): 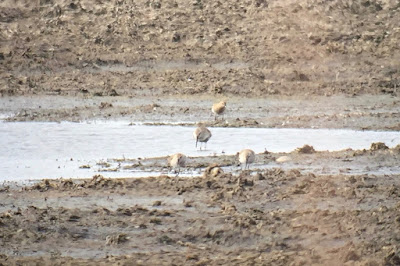 We left Dunbar after 2-3 hours.  Turns out, I scored 16 new county birds which pushed my Greene County list into the 100+ species club.

After Dunbar Slough, we swung back through our former hometown of Ames just to see how things had changed.... and some parts had changed A LOT.  A tallgrass field where I once found a Short-eared Owl had been completely leveled and converted into apartment buildings.  Lovely.

We even parked and walked along the creekside path that we lived on back in the day.  Although we didn't even break 20 species on this particular walk (checklist here), it was fun walking down memory lane like that.  It was also very saddening to think of all the hundreds of times we walked that path and DIDN'T KEEP DETAILED RECORDS.  One of my biggest regrets was not using eBird earlier in life, especially in Iowa.  For various reasons, I felt like using eBird was actually discouraged!  I'm glad to say that I've moved on from that view and saw the light (even though I fear much of Iowa remains in the dark, so to speak).

We ventured farther south, picking up a new county or two, and ended up at the Lucas Unit of the Stephens State Forest.  Although the birding was kind of slow (a singing waterthrush was the best we could do), the butterflies were out and active!  One of the highlights for me was this GRAY COMMA in nice light: 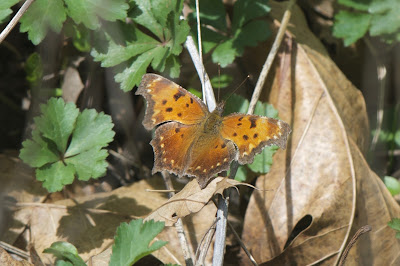 Similar to other commas and Question Mark, note only 2 dark spots on the hindwing.

There were several AMERICAN LADIES about too: 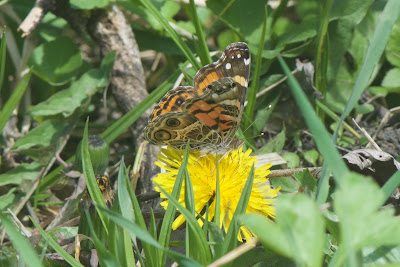 Acting on a tip from Aaron, we paid special attention to a few duskywings we stumbled on.  Apparently this area is a good spot to find SLEEPY DUSKYWINGS... and he was right.  Here's a shot of this lifer butterfly for me: It was hanging out with another dark duskywing that I suspect is a JUVENAL'S DUSKYWING: 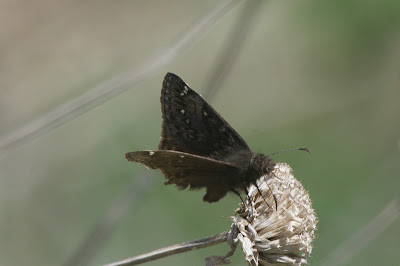 Do you think they look the same?  Look carefully for glossy white spots near the tip of the forewing.  See how the SLEEPY lacks them?

As a slight content detour, do you recognize this painting?  You probably do.  It's called "American Gothic" and was painted by Grant Wood in 1930: 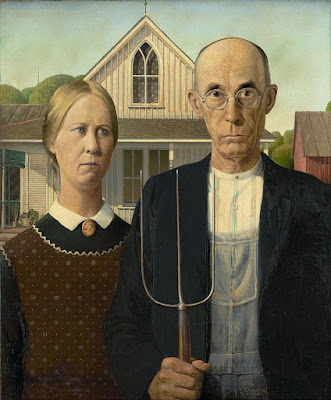 Now take a look at our below photo: 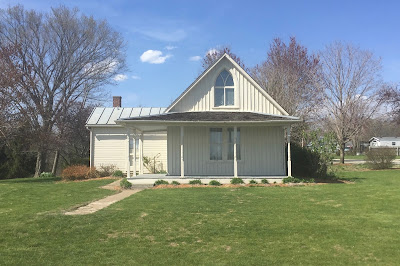 See anything familiar?  Yep, this IS the actual American Gothic house!  We stopped in because hey, it's kinda interesting, right?  There's an impressive visitor center and everything in this small town of Eldon, Iowa.  And no, Ashley and I didn't take the offer of dressing up in the outfits to have our picture taken in front of it.  Moving on...

Continuing our way south, we headed to Lacey-Keosauqua State Park in southeast Iowa (Van Buren County).  It was a pleasant spring afternoon in the wooded valleys: 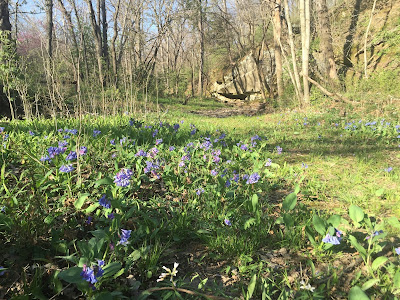 We ventured south of the park for a few hours to pay attention to some grasslands.  Our target was the uncommon and declining HENSLOW'S SPARROW which we found pretty easily: 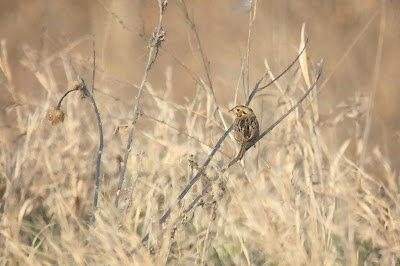 We camped at the state park that night but scrammed first thing in the morning and started birding our way through the park.  The sun getting ready to come up over the river made for a picturesque start to the day: 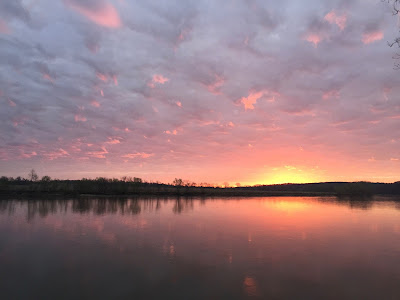 It didn't take much to realize that NORTHERN PARULAS, YELLOW-THROATED WARBLERS, and LOUISIANA WATERTHRUSHES were common; the songs of the latter rang off the valleys and streambeds throughout the park.  Here's a blurry photo of one that we laid eyes on: 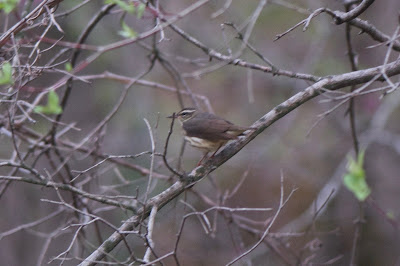 However, the rarest sighting was this TENNESSEE WARBLER: 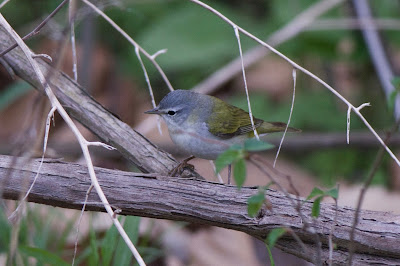 Although not rare here later in the spring, this particular individual broke the previous early-arrival date in Iowa by 3 days!  These early-late dates have weathered a lot of years of birding, editing, revising, and so breaking one of those records is always notable.  Thankfully I had my camera on my shoulder and was ready for it!

We continued down the road and decided to bird various units of the Shimek State Forest in Lee County.  Each of the units seemed to be dominated by YELLOW-THROATED WARBLERS like this one at the Donnellson Unit: 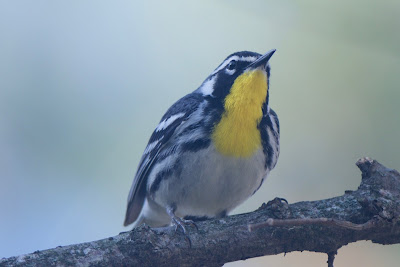 At the Croton Unit, we had more luck with butterflies than warblers (although a singing BLACK-AND-WHITE WARBLER was nice).  Here's a SPRING AZURE, a tiny but widespread species during the spring months: 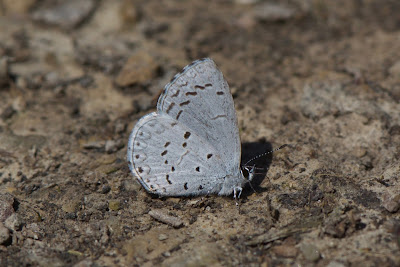 The highlight for me at the Croton Unit was this HENRY'S ELFIN that we found on the creek bank: 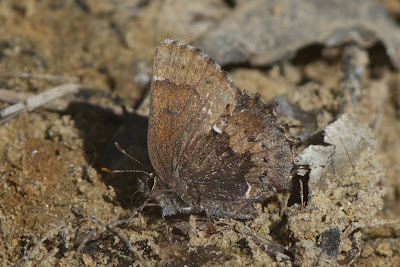 This small brown butterfly is basically a woodland hairstreak but I had seen them only once before so I was happy to see another.

Lastly, Ashley and I pulled up to the famous Argyle Junkyard and before we could even stop the car and get all the windows down, the resident BEWICK'S WREN was singing out in the open! Although it may not look like much, this is one of the rarest breeding birds in Iowa!  Although populations used to be more widespread in the East, there is only a place or two birders can hope to see this species in Iowa anymore.  We felt very lucky to see this guy, a bird many folks try for and miss.