Needle in the hay

It's amusing how it was just my last post where I was waxing... err... ineloquently about rare birds here and how many aren't expected.  You see, I was very lucky last week to be on the receiving end of a Code 4 European Golden-Plover, just the 3rd record for all of western North America.  Ok, for real, I would have been happy with that... but can you believe that an even rarer bird showed up last night?  If not, you should.

I was at the seabird cliffs at Reef Point when I noticed a distant bird with a different wing cadence... it was soaring a lot... I put my bins up but wasn't really expecting to see what I saw.  It was a SWIFT of all things.  All I saw was a flash of white and that it was a swift before it ducked around a cliff.  My mind naturally jumped to a thought like "Sweet, I just found a Fork-tailed Swift!".  Thankfully, the bird quickly came back around and this time I was ready with my camera.  I sprayed.  Immediately some things jumped out to me even before I zoomed in on my photos.  For one, this thing was HUGE.  Think of a swift the size of a Black Tern or something.  I snapped a bunch of crappy pictures, looked down, zoomed in on the bird... and was confused.  What was I looking at?  Is that white under the tail?  Fork-tailed is supposed to have white above the... holy... crap.

I fumbled with my phone, I wanted to open a bird app to look at a swift that I knew about... but didn't know super well.  I ran up to Ram, a sharp birder and super nice dude, and showed him my crappy photos.  He thought the white was under the tail too.  I took one glance at the app and that's when it started to sink in... we were looking at a WHITE-THROATED NEEDLETAIL: 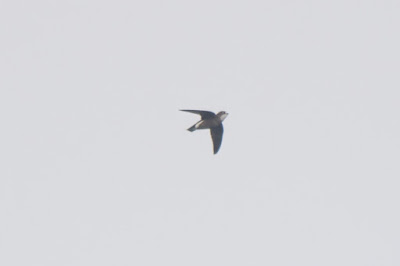 Notice the white throat and the white U-shape under the tail. 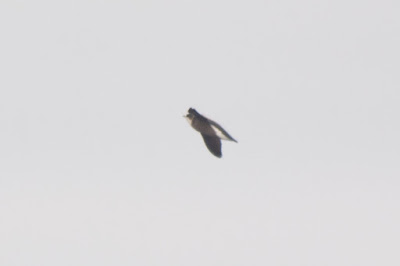 This is a big deal.  For starters, this was only the 6th time this species has ever been found in North America!  Also, all 5 previous records come from the outer Aleutians and most of those in the month of May.  So not only was this the farthest east record ever for the ABA area, it was also the latest by 3+ weeks.

What a cool species though.  These monster swifts are found in central Asia and southern Siberia... and I do mean monster; their wingspan is about 21 inches!  One claim to fame is their speed.  You've probably seen swifts, maybe even the big and fast White-collared Swifts... but it's actually the White-throated Needletail that is the fastest-flying bird in flapping flight; speeds have been reported at 105 mph.

Anyway, back to yesterday... after the bird made a couple of passes by Ram and me, I called Scott.  He rushed out of the house and up to Reef.  His first look was of the bird literally flying 15 feet over his head at probably 60 mph.   That'll clean out the sinuses!

Eventually all the birders on the island got to see the famous visitor.  Later in the evening it was seen slowly circling back and forth over the tip of Reef Point, well south of where we're allowed to bird.  And that's how the story ends.  The bird wasn't relocated today.