I’m not sure by what mechanism one falls behind in blogging by almost 2 weeks especially given the fact that the person wishes they could update you all every couple of days.   Here we are though, July 15, more than 2 months from when we arrived in May.

In terms of rarities, this time of year is traditionally a bit of a lull.  That’s not to say good birds haven’t happened… it’s just that they don’t very often.  It’s ok though, it’s not all about rarities (or is it?); many of our clients lately have been interested in things like Northern Fur Seals or photographing the splendid array of seabirds St. Paul Island hosts on its cliffs.

And the seabirds are themselves splendid as well.  The TUFTED PUFFINS continue to put on a great show, especially at the well-known Reef seabird cliff: 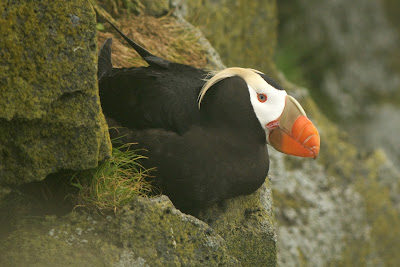 Chicks litter the landscape these days and it’s become commonplace to nonchalantly swerve around broods of Semipalmated Plovers and Rock Sandpipers on the roads.  So many Rock Sandpipers have fledged their chicks that the Salt Lagoon is getting busier and busier with the growing number of birds.  Still, it’s not uncommon to see a ROCK SANDPIPER, such as this one, on random bits of roadside tundra: 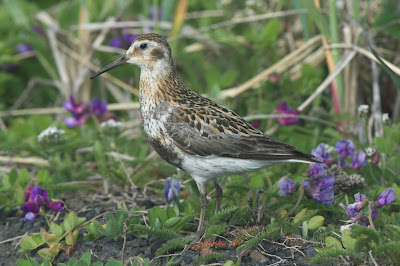 The SNOW BUNTINGS are equally as busy with feeding duties and it’s not rare to see newly-fledged chicks bopping along the roadsides.  Here’s a male that’s in the process of delivering some food to its chicks on Hutch Hill: 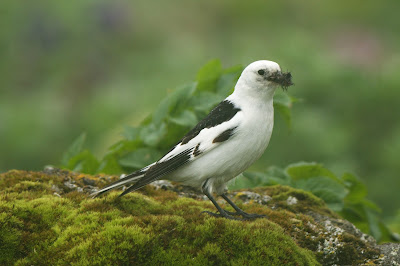 Still though, signs of fall migration are all around if you know where to look.  For example, the numbers of migrant shorebirds continue to grow.  A recent visit to Marunich (North Beach) yielded about 300 Ruddy Turnstones which is a big turn-around from several weeks ago when there were 0.  We’ve also seen growing numbers of WESTERN SANDPIPERS (now up to 3), PECTORAL SANDPIPERS (also up to 3), and we were even treated to this less-than-annual BAIRD’S SANDPIPER in the quickly-drying Pumphouse Lake: 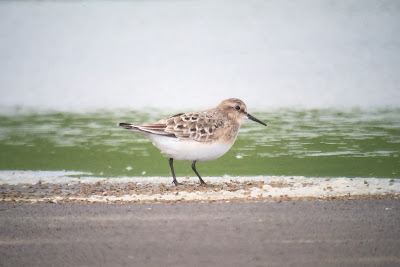 We’re getting that fall vibe from birds other than shorebirds as well.  For instance, we’ve been seeing quite a few more jaegers in recent days compared to the not-so-distant past.  In fact, I’ve managed to see all three jaegers species in the last 48 hours.  Here’s a LONG-TAILED JAEGER that was simply sitting on the road near Big Lake one day: 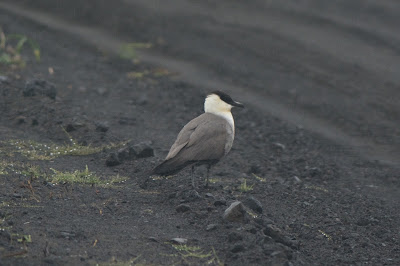 In terms of uncommon sightings though, perhaps the most interesting thing going on is the crossbill invasion (and whether I should use “invasion” is up to debate).  Unlike most years here in the Pribs, we actually do have crossbills around the island.  It’s true, we don’t have trees/cones here so one must wonder how happy these birds must be.  Despite their presumed annoyance, it’s been a good time having them show up around the island from time to time.  My first was of a wet WHITE-WINGED CROSSBILL on the road leading to Marunich: 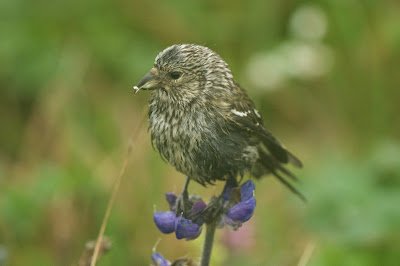 Turns out they’re not too shy.  This bird even approached me several times!

A few days later, a hefty flock of 13 was found hanging around Reef (keep in mind that the previous high count for this species was 1).  And last but not least, we had 2 WWCRs on the Low Cliffs yesterday including this ludicrously tame individual: 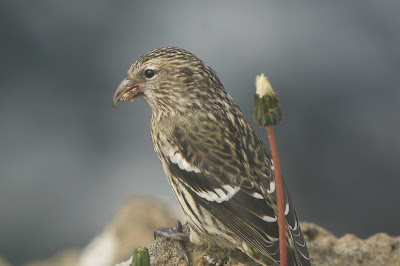 The hike up to the Low Cliffs (these come before the High Cliffs) was a spectacular scene yesterday with the calm conditions and attractive array of wildflowers.  I’ll leave you with a panorama of the area: 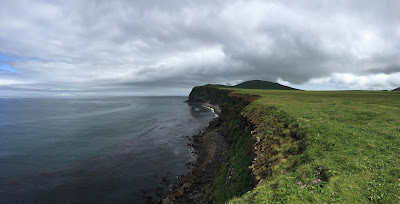