When describing the birding here on St. Paul Island, we find ourselves saying things like:


"If you stay long enough, you WILL see rare birds.  However, not all of them are expected ones."

It's totally true too.  Sure, if you spent a season here, you'll probably see things like Brambling and maybe a Wood Sandpiper or two.  You'll probably even see some rarer things but you may as well stop predicting there.

You see, once in a rare while there is a bird that comes out of left field.  Something on nobody's radar.  Those moments are especially memorable and I'm happy to say that I was on the connecting end of one of those moments yesterday morning.  Here's how it went down...

I was guiding 4 keen Danish birders around the island and, being their last morning on the island, we figured it would be nice to show them Northeast Point before they left.  We were driving through Novastoshna when I saw a largish shorebird flying SW, parallel the road, to our left.  However, I lost it once it swung behind the van.  Knowing only it was a golden-plover species, we turned around and decided to walk Dune Lake in hopes of relocating it.  We weren't very far in when it flushed from the lake bed and flew up towards the road where we lost track of it.

It was then that some of the group thought they saw white underwings and that the call didn't fit Pacific.  Not knowing where the bird went but very curious to see the bird again, we decided to walk Fantasy Wetlands in hopes of relocating the bird and confirming suspicions.  Again, before I saw the bird on the ground, it flushed and flew SW towards Big Lake.  It was then that I managed to rifle off a few pictures of the bird in flight: 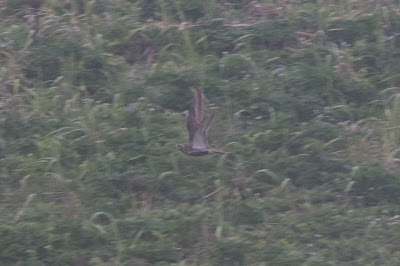 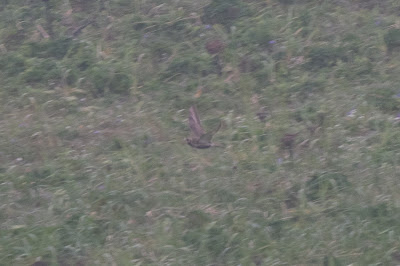 After the bird went out of view over the dunes towards Big Lake, I paused, bowed my head... and started sorting through the photos I just took.  I zoomed in on the first photo.... white underwings.  REALLY noticeable white underwings too.  Next photo.  White underwings again.  I flipped my camera around and showed the Danes the zoomed-in look on the camera screen.  "Interesting" I said with a shrug and smirk.  The Danes wanted to see the tail.  Scrolling through more of my photos, I managed one of the bird with the foggy sky in the background and there are NO toes extending past the tip of the tail (something a Pacific Golden-Plover would show): 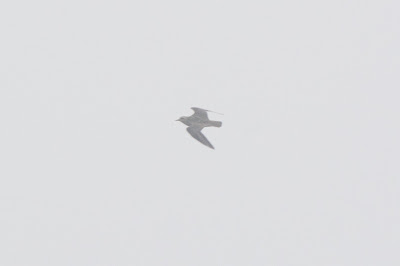 It hadn't really sunk in by the time I drove to the hilltop to call Scott.  Groups converged in Novastoshna but nobody could find it before lunch.  Later in the day, Scott managed to see it flying overhead so hopefully it's still in the area for others to see.

This species is a Code 4 rarity on the ABA checklist but beyond that, it's exceedingly rare in this part of the world.  Yes, there have even been flocks of these in Newfoundland and the like but we're a long ways from Newfoundland!  This is the 1st record of this species from the Bering Sea region and only the 2nd or 3rd record for all of western North America.
Posted by Cory J. Gregory at 6/25/2015 06:03:00 PM