If you remember back to all the excitement about the European Golden-Plover here on St. Paul, there was actually another cool plover here just in the days leading up to that.  Some clients and I were trying to find a good place to photograph kittiwakes and because the Salt Lagoon usually has a nice flock sitting on the sandbars, we ventured out onto the firm sand bottom of the lagoon at low tide.  But once out there, I was scoping a far corner when I saw this run into view: 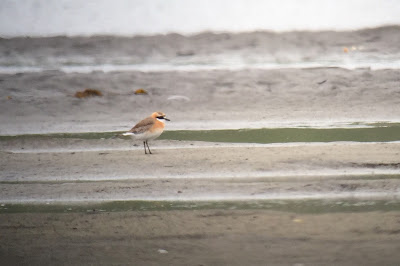 The bright orange on this plover is a dead giveaway; it's a LESSER SAND-PLOVER!  Although they're rare anywhere in the ABA area (they're a Code 3), this species is almost expected in western Alaska (it's just hard to predict when/where they'll show up).  However, I wasn't expecting to find such a stunning male either.  What was more of a surprise was that we soon realized there were TWO sand-plovers together out on the Salt Lagoon.  I'm not sure how often that happens but who was I to argue?!

Both sand-plovers eventually took flight but instead of ditching the area, they actually flew right by us: 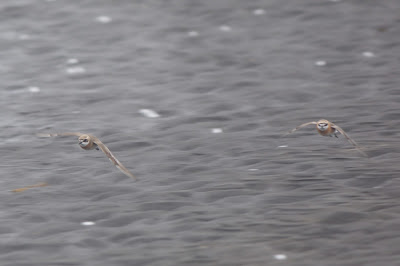 Some phone calls were made, we backed off to give these rarities space, and eventually all of the birders on the island got to see these stunning shorebirds.

But then fast forward a few days.  It was my day off and so like most of my days off, I was out birding with Ashley.  We figured it was worth walking the Novastoshna area again just to make sure the European Golden-Plover hadn't returned.  We were just about done combing the area when Ashley hollered from her distant location.  I looked over and she was making nonsensical hand gestures about, presumably, a bird she could see from her vantage point.  It wasn't until she made a hand gesture about something with a long, down-curved bill that I realized what she saw.  I peeked over the hill and sure enough, we were face-to-face with a curlew: 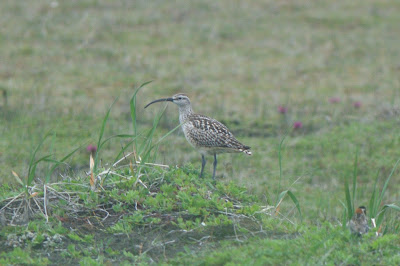 The thing is, no curlew is expected here at this time of year.  It flew a short distance and that's when we saw the buffy rump and tail: 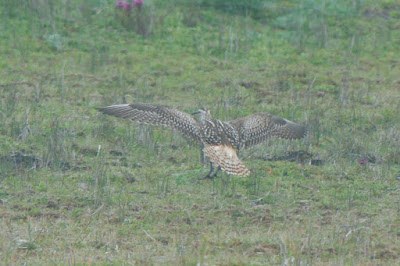 We were looking at a BRISTLE-THIGHED CURLEW!  This enigmatic species is quite rare on a worldwide scale; in fact, there's only about 7000 of these in existence.  This species (Numenius tahitiensis) was first described in the 18th century on James Cook's travels to Tahiti where, as we now know, some of these curlews spend their winters.  However, where did these birds breed?  This question puzzled ornithologists for more than 150 years until 1948 when, finally, the breeding grounds were discovered.  And yes, it turns out they only breed in western Alaska.  Although they don't breed here in the Pribilofs, this species is nearly annual here, usually on spring or fall migration.

BTCUs are unique in several ways but one interesting factoid is regarding tool-use.  Yes, these curlews are the only shorebirds in the world to use tools!  More specifically, they use rocks to break open bird eggs on the wintering grounds.  Finding food on remote ocean atolls can be a challenge, after all, and several species of birds will eagerly feed on bird eggs if given the chance (I saw this firsthand in Hawaii when turnstones would sip from broken albatross eggs).

Another interesting way that BTCUs are unique among shorebirds is that they become flightless during molt!  If that's part of your life history, you better hope you're on a tiny atoll with no predators... which is exactly what most of these curlews do.

Anyway, it turns out this curlew was going to stick around for several days and so all the birders on the island got to see it.

Lastly, I'll end with a picture of a non-shorebird; here's a random tandem of some HORNED PUFFINS: 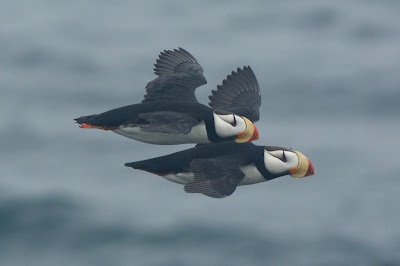