As January comes to a close, I've been continuing to bird locally in Sacramento County.  One such destination is the Blue Heron trail portion of Stone Lakes NWR.  This spot is less than a 5 mile drive from where I live and it has the benefit of being rather quiet; no hoards of bikers zooming by like those up along the river.

A recent visit there yielded 41 species in less than an hour.  The SONG SPARROWS were up and singing in the sun though which was a nice change from the chilly fog we've been having: 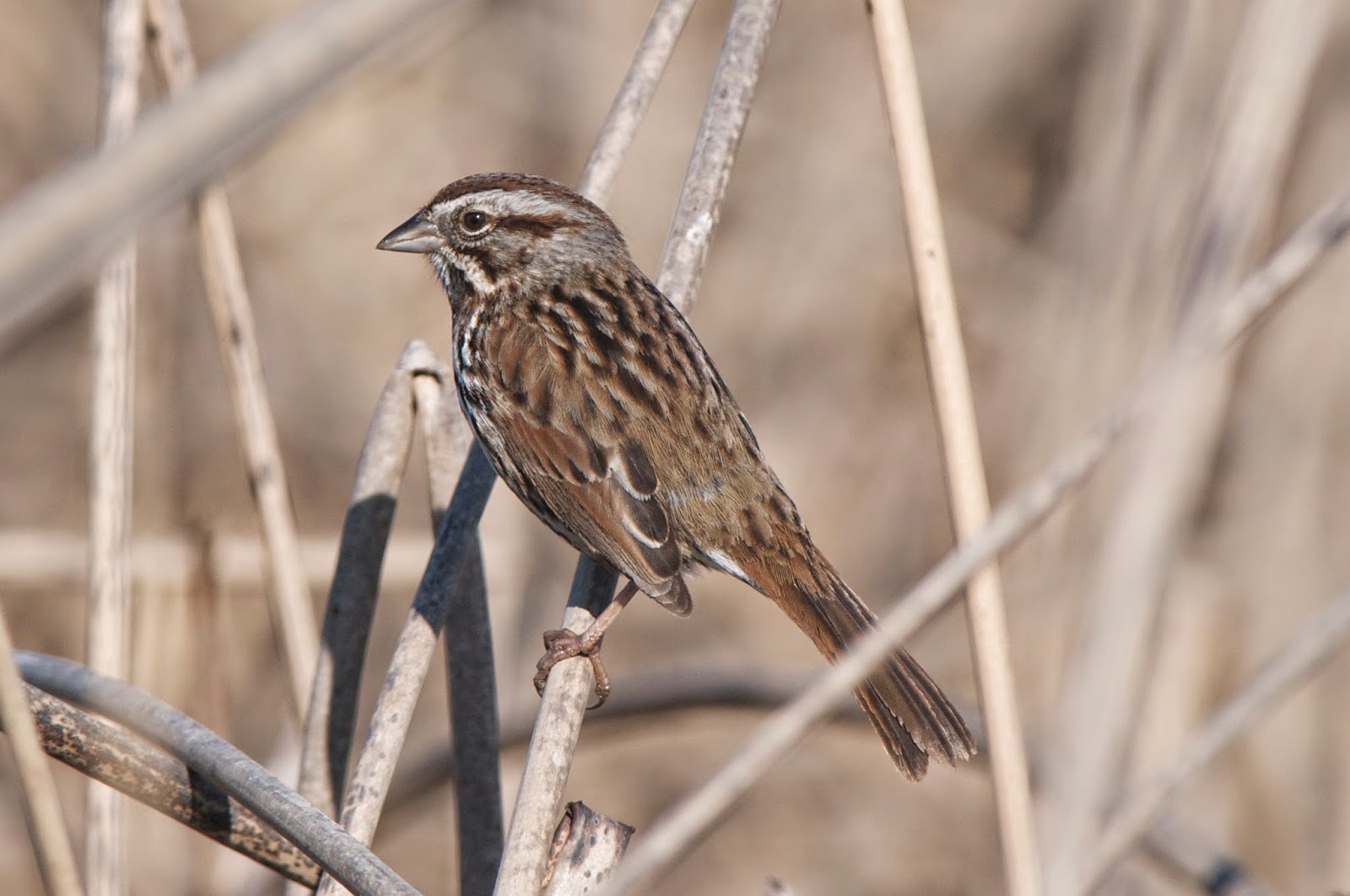 Yesterday I spun south to Cosumnes River Preserve which is a little farther away, about 12 miles from where I live.  I was curious if I might spot a Barn Owl on the drive down or maybe get to hear a Great Horned Owl but I was slow to get out the door and didn't make it there early enough before sunrise.

I started along Desmond Road where the goose spectacle was impressive.  At least 8 thousand geese, mostly GREATER WHITE FRONTED and SNOW swirled over as dawn broke.  Mixed in were some CANADA and ROSS'S as well.  It was a gorgeous morning though with some sparse ground fog and a nice sunrise: 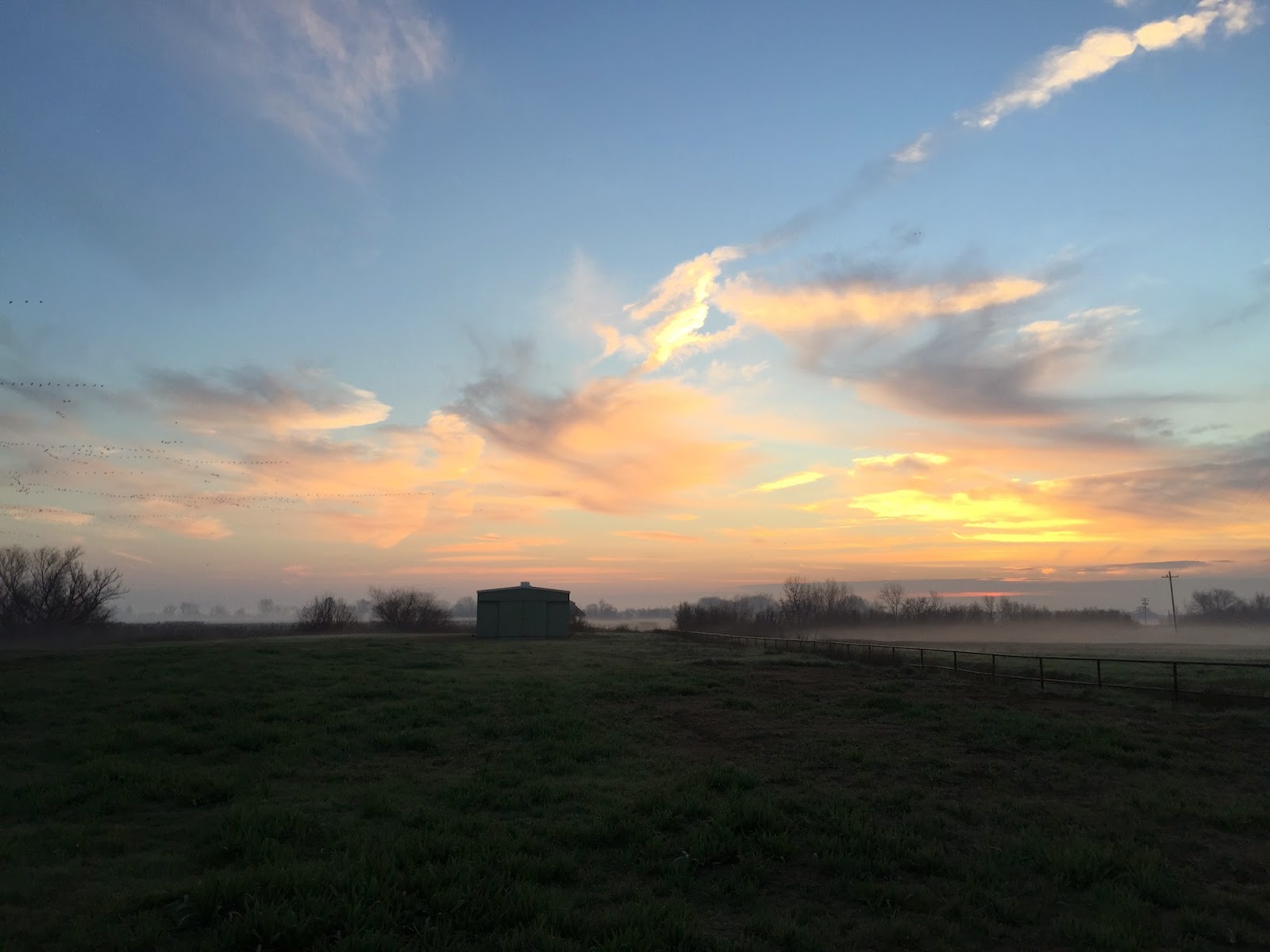 It was there along Desmond Road that I lucked into a "EURASIAN" GREEN-WINGED TEAL.  This is a decently rare subspecies around here and this represents only the 2nd Sacramento County record in eBird.  I do know that they're occasionally seen in Yolo County just to the west though.  Although this race is abundant on St. Paul Island, I think this was my first self-found one in the Lower 48.  You can spot it fairly easily by the horizontal white stripe on its side and the lack of the white vertical spur that the other drake teal have: 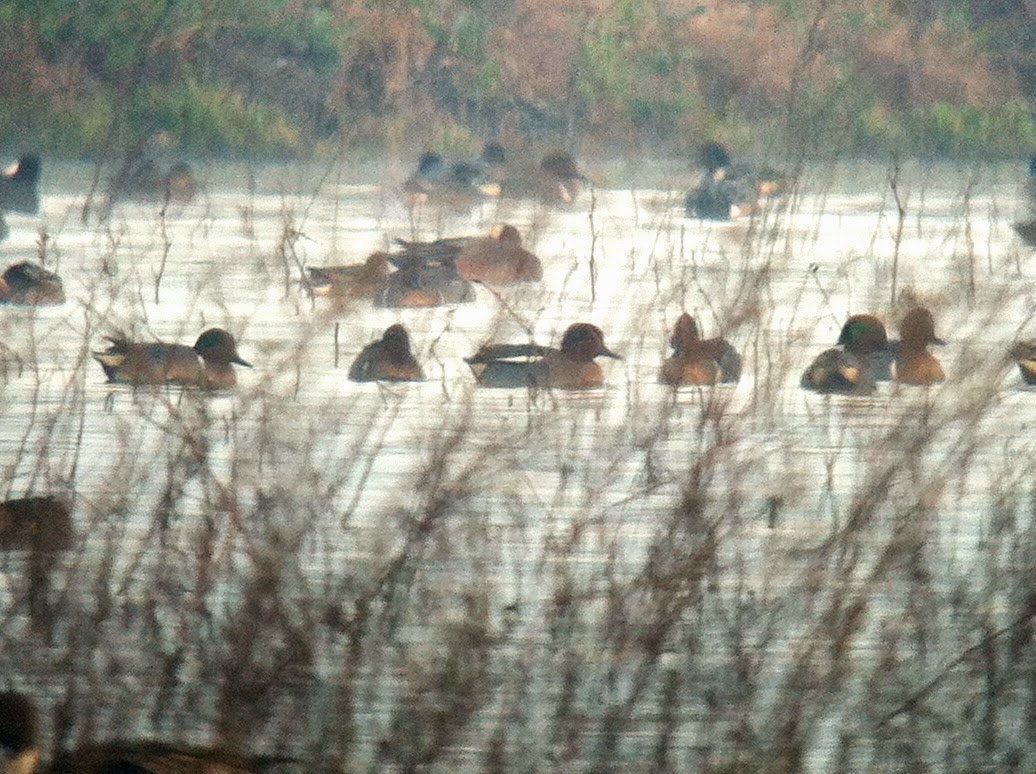 Oh, and if you look in the background of the above picture, you'll see a wigeon that could very well be a EURASIAN WIGEON.  Granted, I didn't see that bird in person and only saw it once I uploaded the photos.  From this angle, I couldn't swear that it wasn't a hybrid though and so I left it off my list.  The good news is that Euro Wigeon is more expected here than the teal.

Next stop were some of the ponds on the west side of Franklin Blvd.  I picked up a bunch of species for the morning including this HERRING GULL that was busy trying to shovel down this dead duck: I ventured into the woods after that to continue to round off my checklist.  GOLDEN-CROWNED SPARROWS are one the most abundant species in thickets and brambles here in the Central Valley.  The brambles there were no exception: 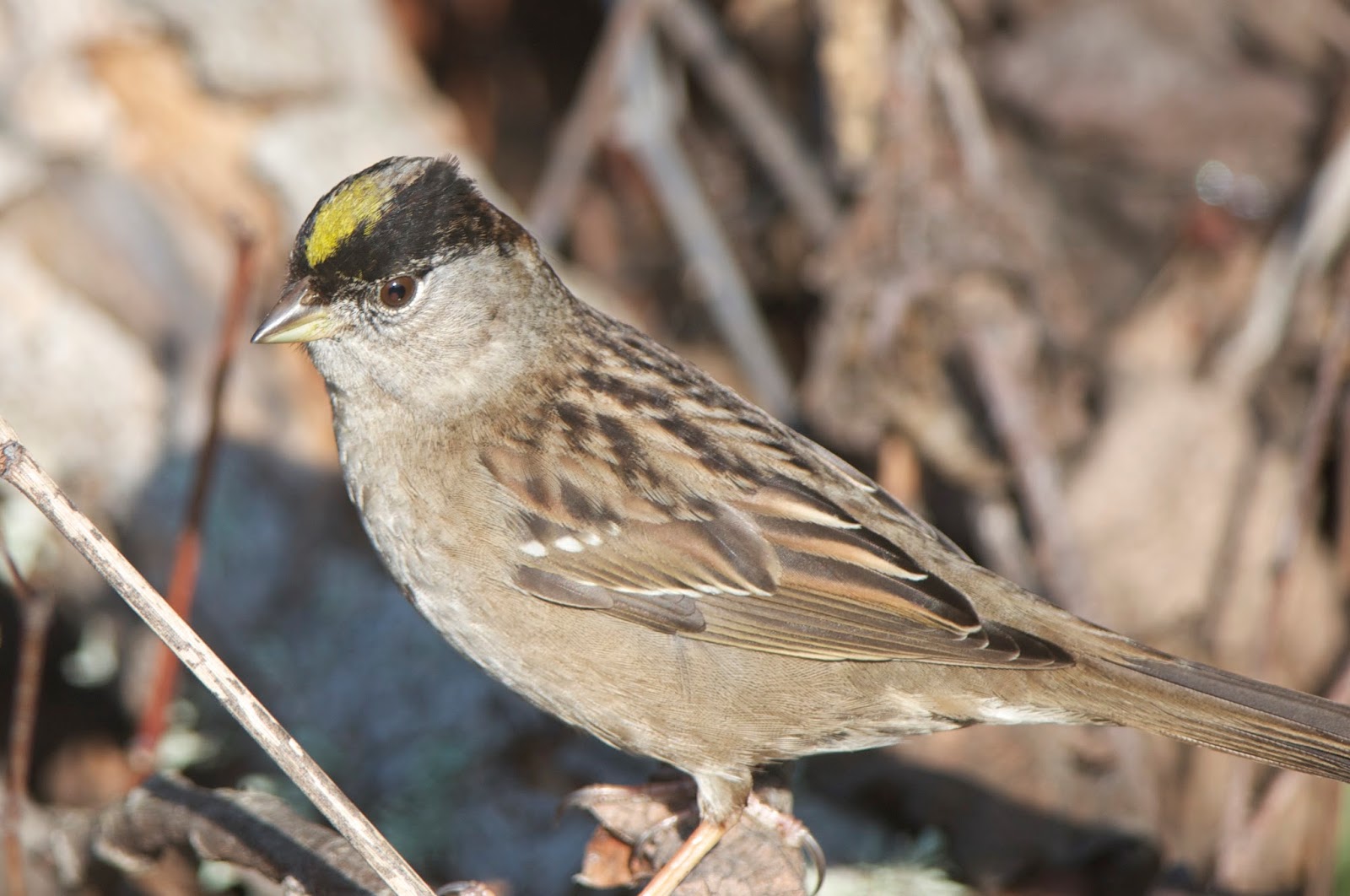 However, not a single species of chickadee is found around here.  That niche is filled by the abundant BUSHTITS and, if you're in a wooded setting, OAK TITMICE.  Here's one of the latter from my consumption of Cosumnes yesterday: 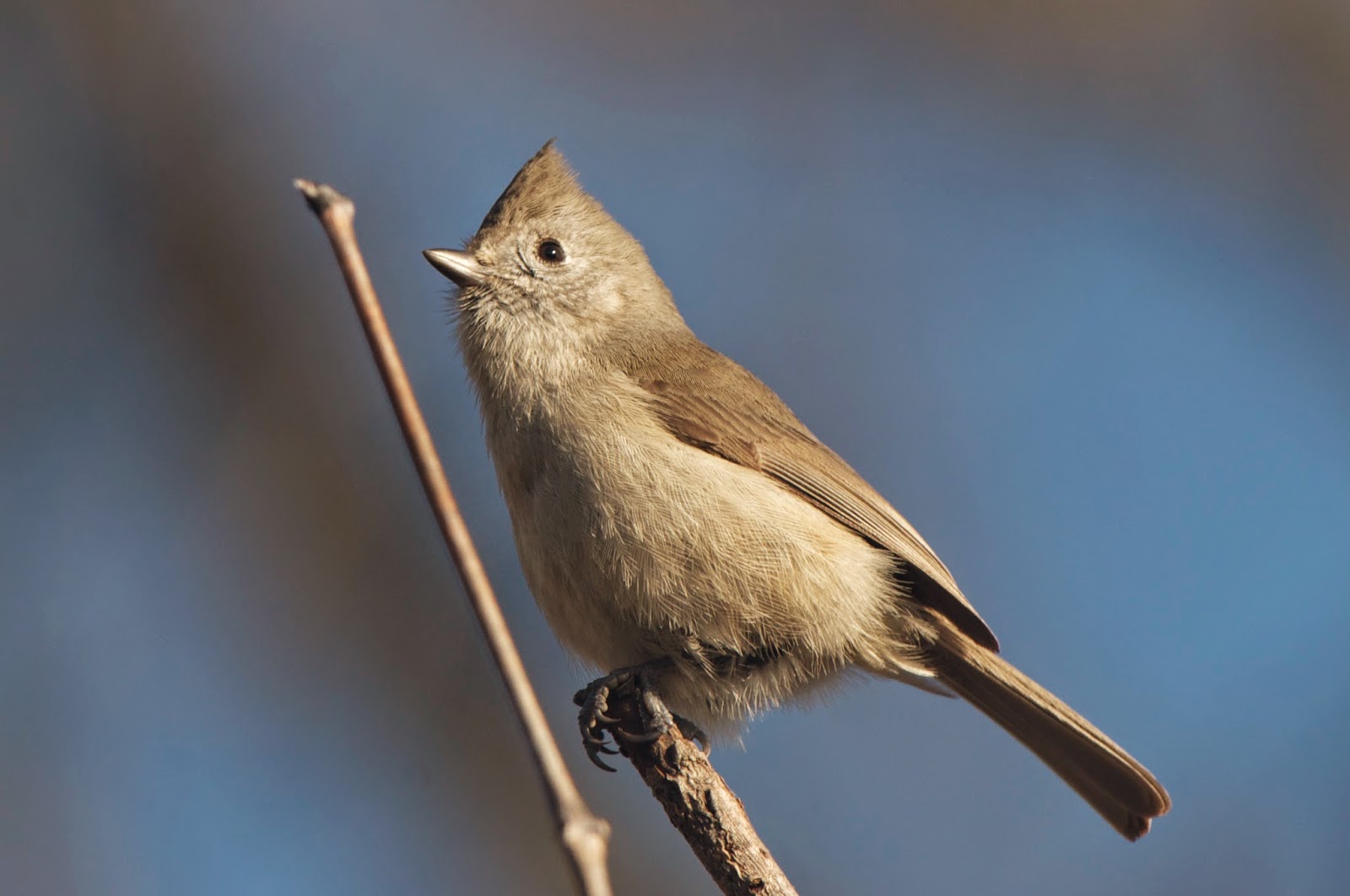 There were several WESTERN BLUEBIRDS foraging on the oak-savannah portion of the hike.  Here's a male showing the blue belly which is something Eastern Bluebirds lack: 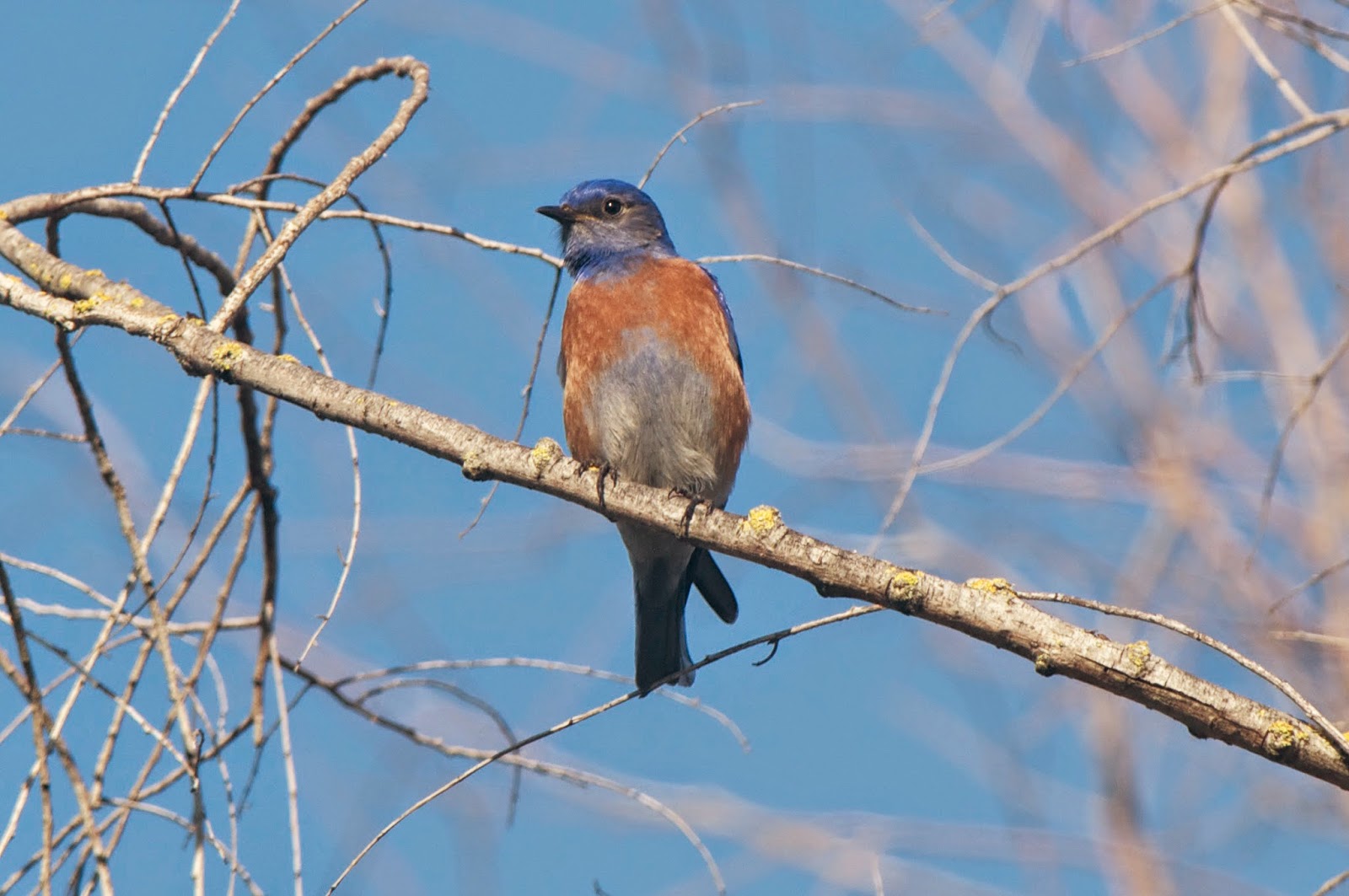 I hiked down around The Point and continued to snag new birds for the day like BROWN CREEPER, GOLDEN-CROWNED KINGLET, and HUTTON'S VIREO.  Here's a view with three different heron species (the back bird is a species one often misses too): 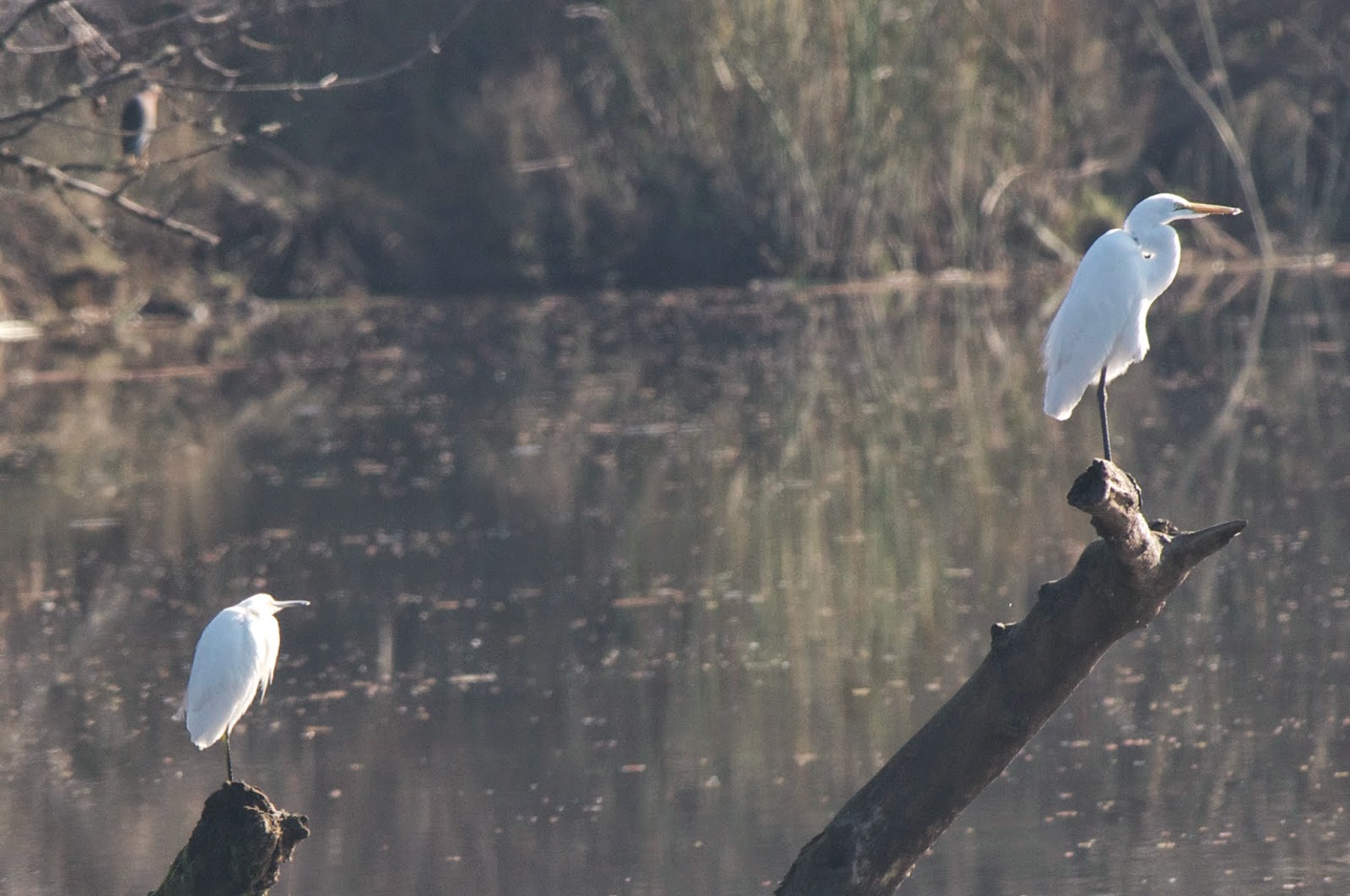 The Point was very active.  Hoards of BUSHTITS, OAK TITMICE, and WHITE-BREASTED NUTHATCHES bounced from tree to tree, NUTTALL'S WOODPECKERS and NORTHERN FLICKERS were harassing each other, flocks of SPOTTED TOWHEES and FOX SPARROWS rummaged through the leaf litter.  Add to that a nice sunny morning and even the "OREGON" DARK-EYED JUNCOS seemed to be more attractive: 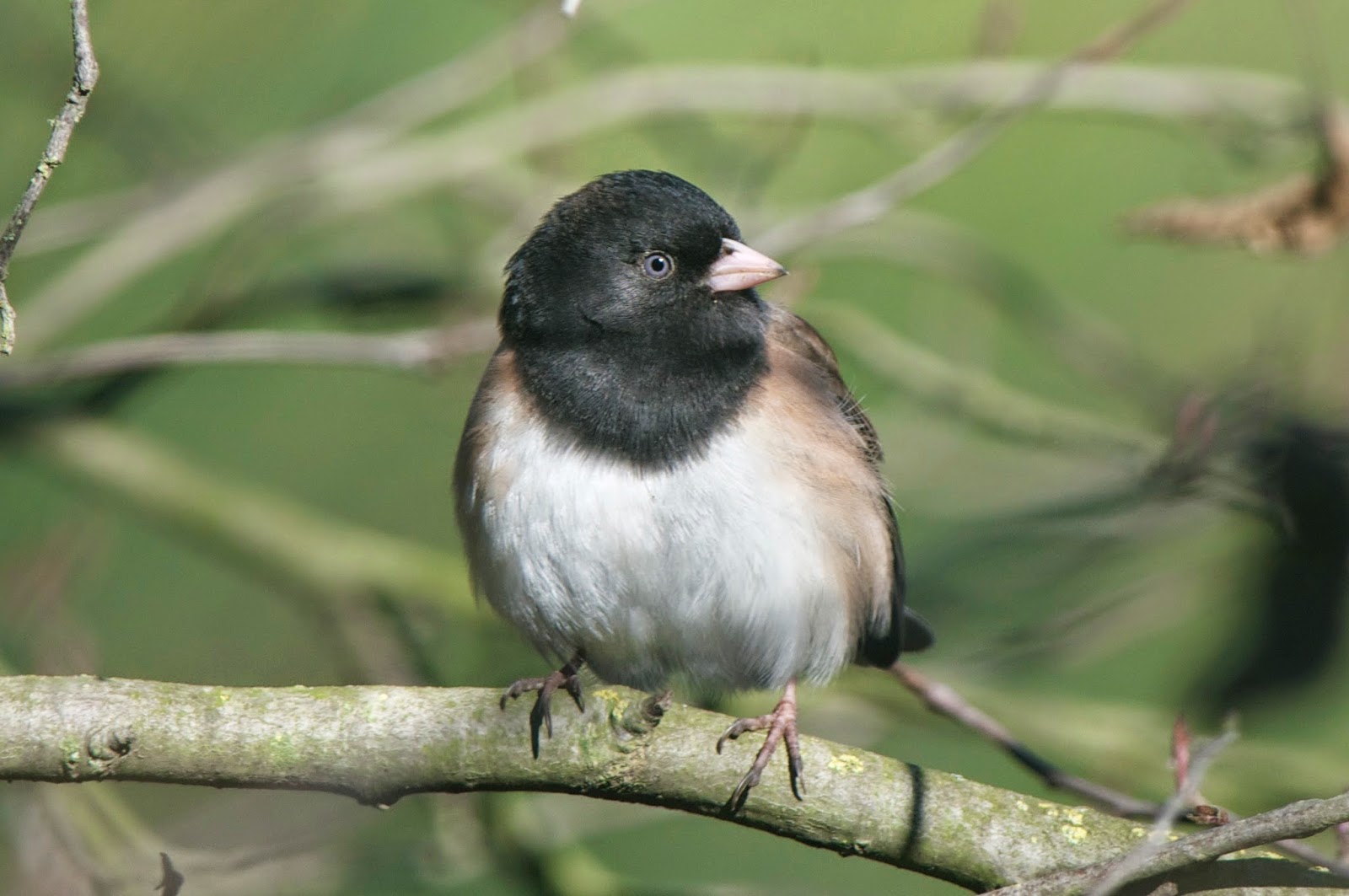 I'm not sure I was ever out of earshot of calling YELLOW-RUMPED WARBLERS during the entire visit.  The vast majority of YRWAs right now are "AUDUBON'S" but I did manage a few "MYRTLE", like this scruffy bird: 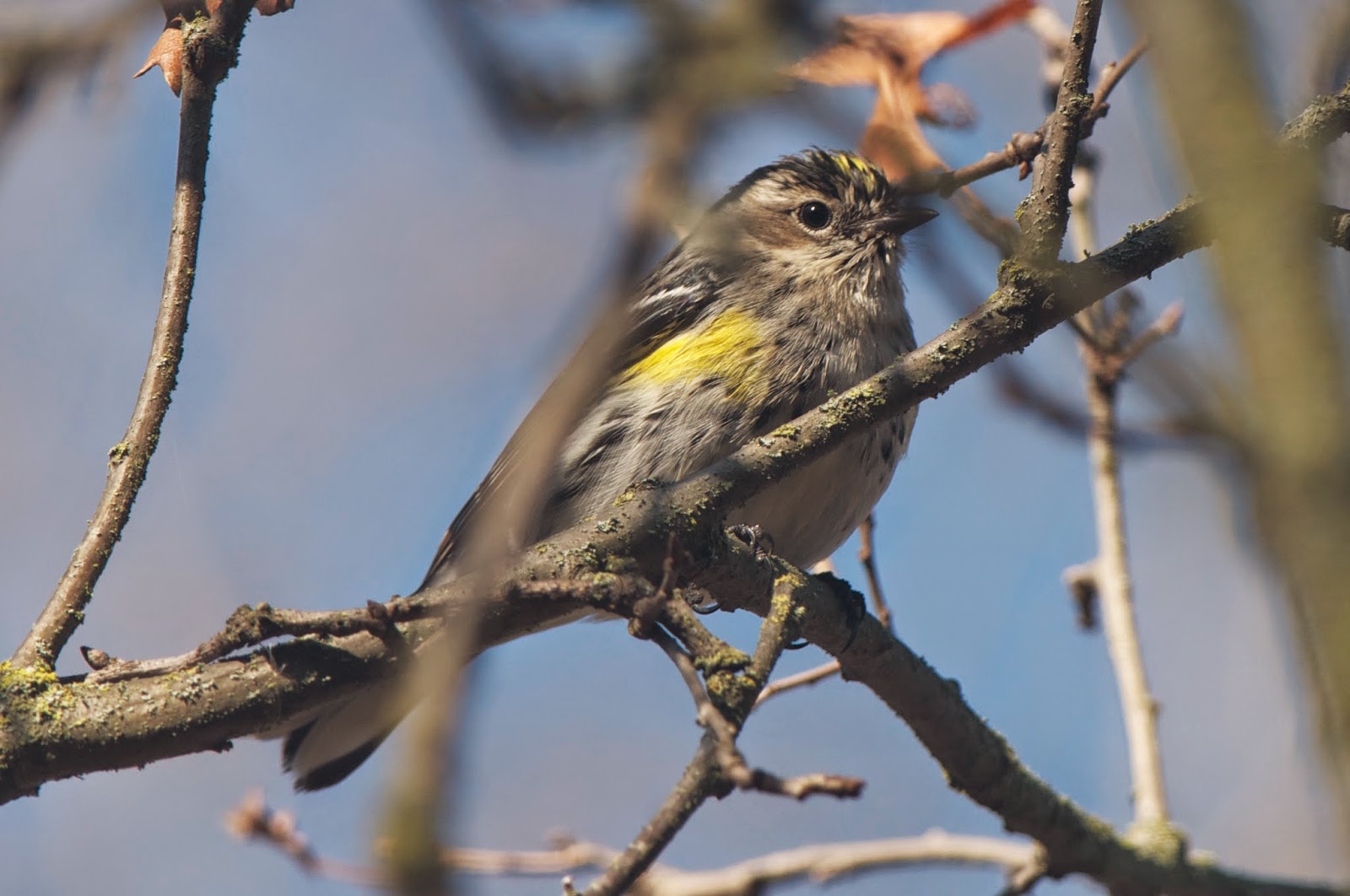