It's been fairly quiet here in Sacramento County, at least for us.  Most of my birding lately has either been at Don Nottoli Park, a local patch of ours, or simply making checklists from the yard.

Although birding the local patch might seem rather dull, and it is at times, it's still possible to find neat things that we haven't seen there before.  For example, this MERLIN was the first record of that species from the park: 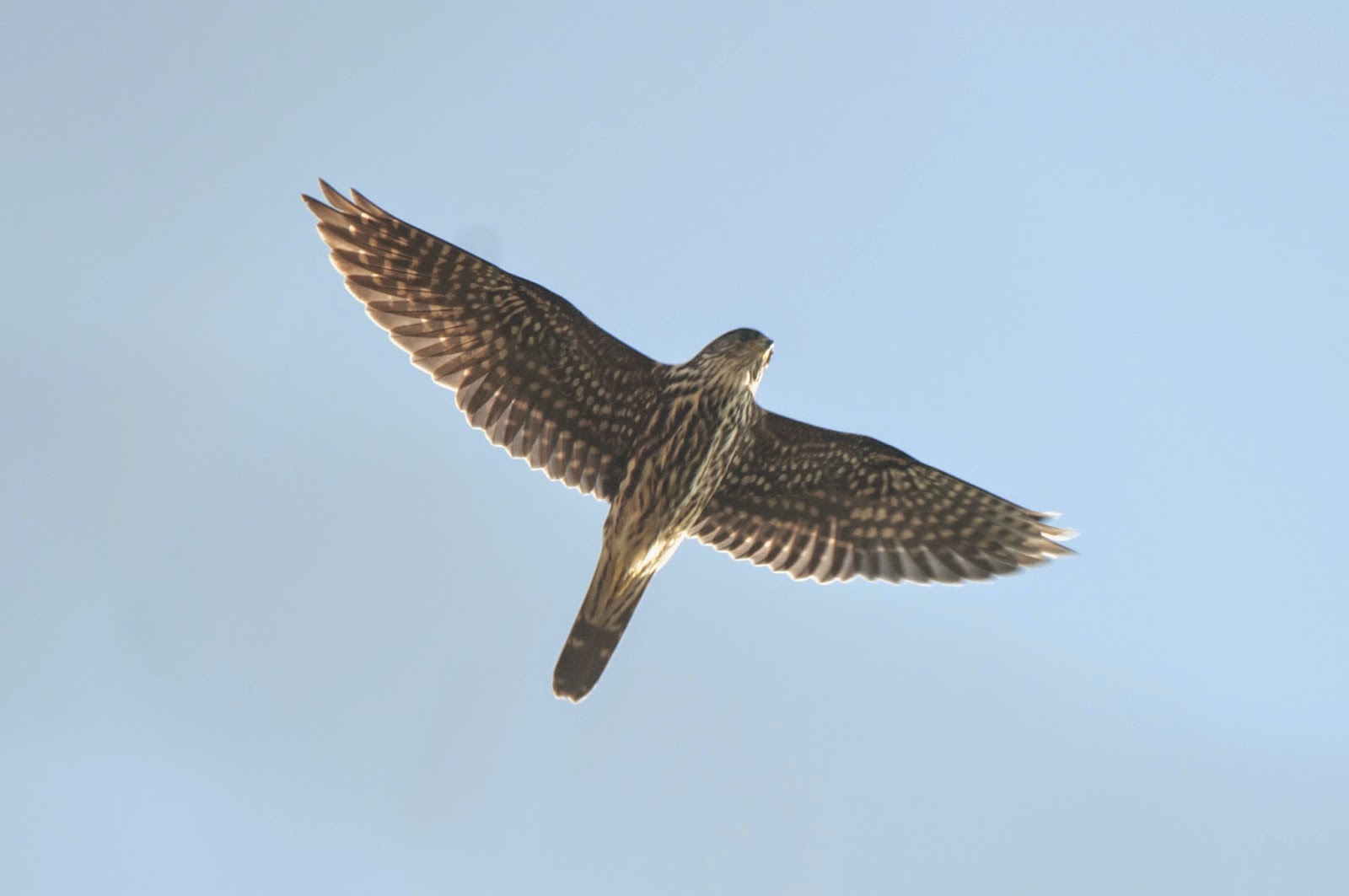 Although I've seen MERLIN from the yard 5x, they're pretty scare overall in the area.  In fact, I just checked my eBird records for Sacramento County and can say that I see 22 AMERICAN KESTRELS for every MERLIN.

Another first record from Don Nottoli park was this CACKLING GOOSE.  You can see the white collar on the smaller goose on the right: 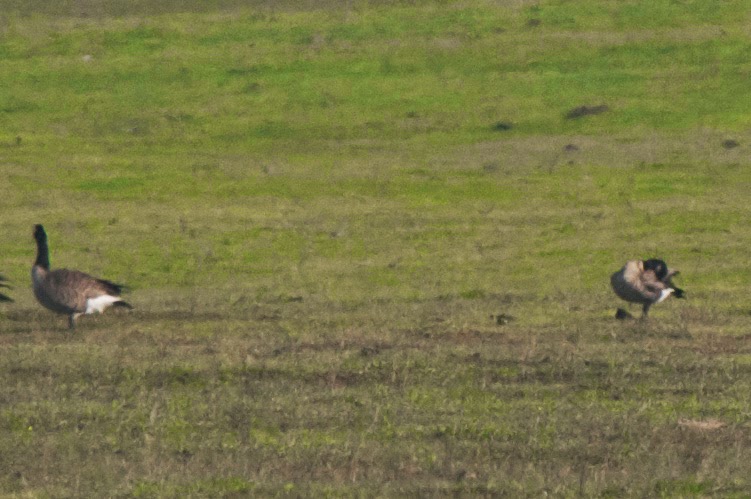 This species definitely isn't that rare but they're usually so outnumbered by GREATER WHITE-FRONTED GEESE at the park that it's just a matter of sifting through enough geese (and I don't usually take my scope).

Looking at the picture of the geese, you can see a lot of grassland going on.  It's true, Stone Lakes NWR butts up directly next to Don Nottoli Park, and much of Elk Grove, in fact.  The expansive grazed grasslands are responsible for many of the cool rural birds we see so close to an urban setting.  A good example of that is this uncommon grassland raptor, the FERRUGINOUS HAWK: 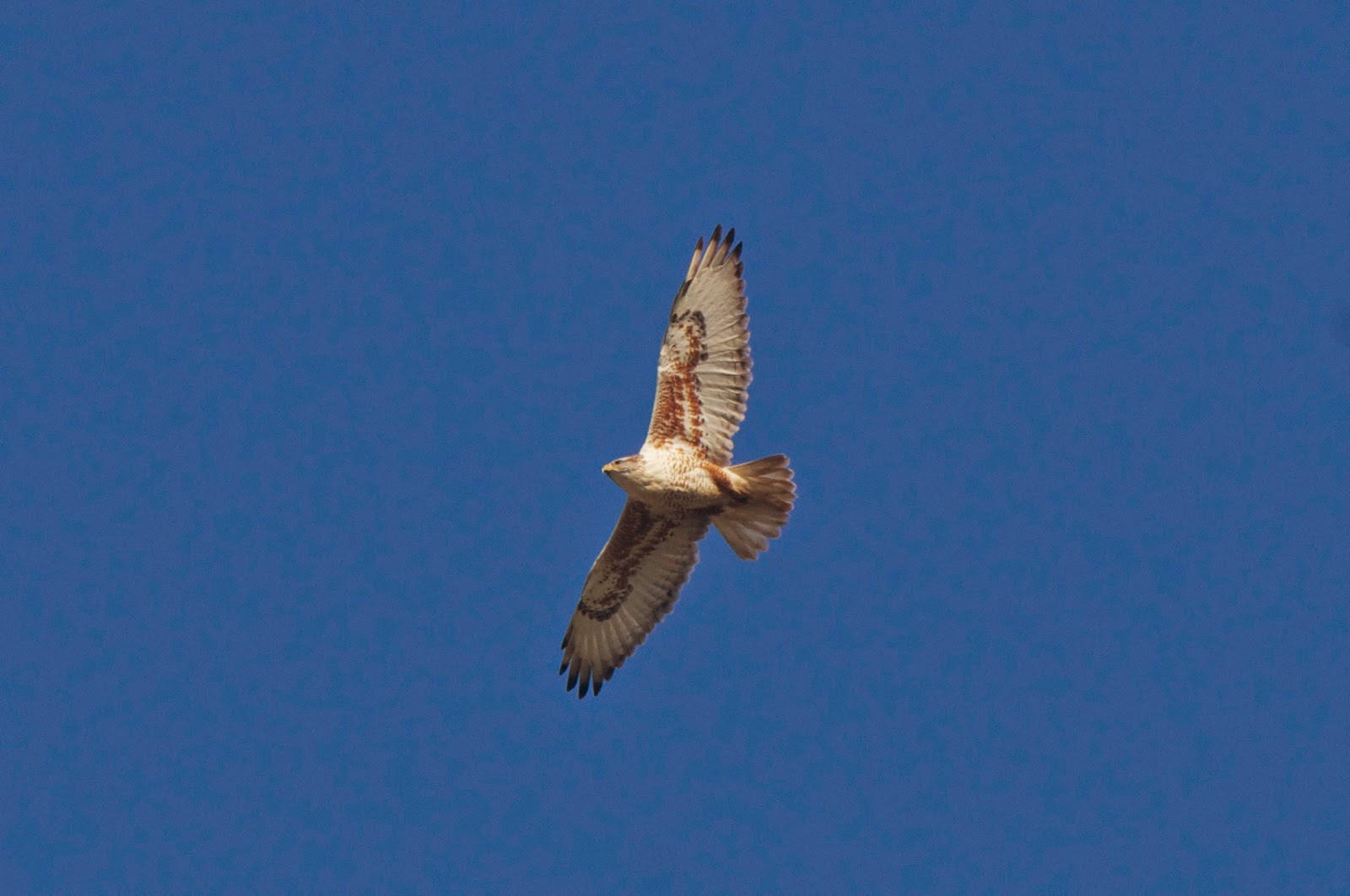 Although they're generally uncommon around here, spend enough time around grasslands in the winter and you'll surely find some.

Same goes for this flycatcher: 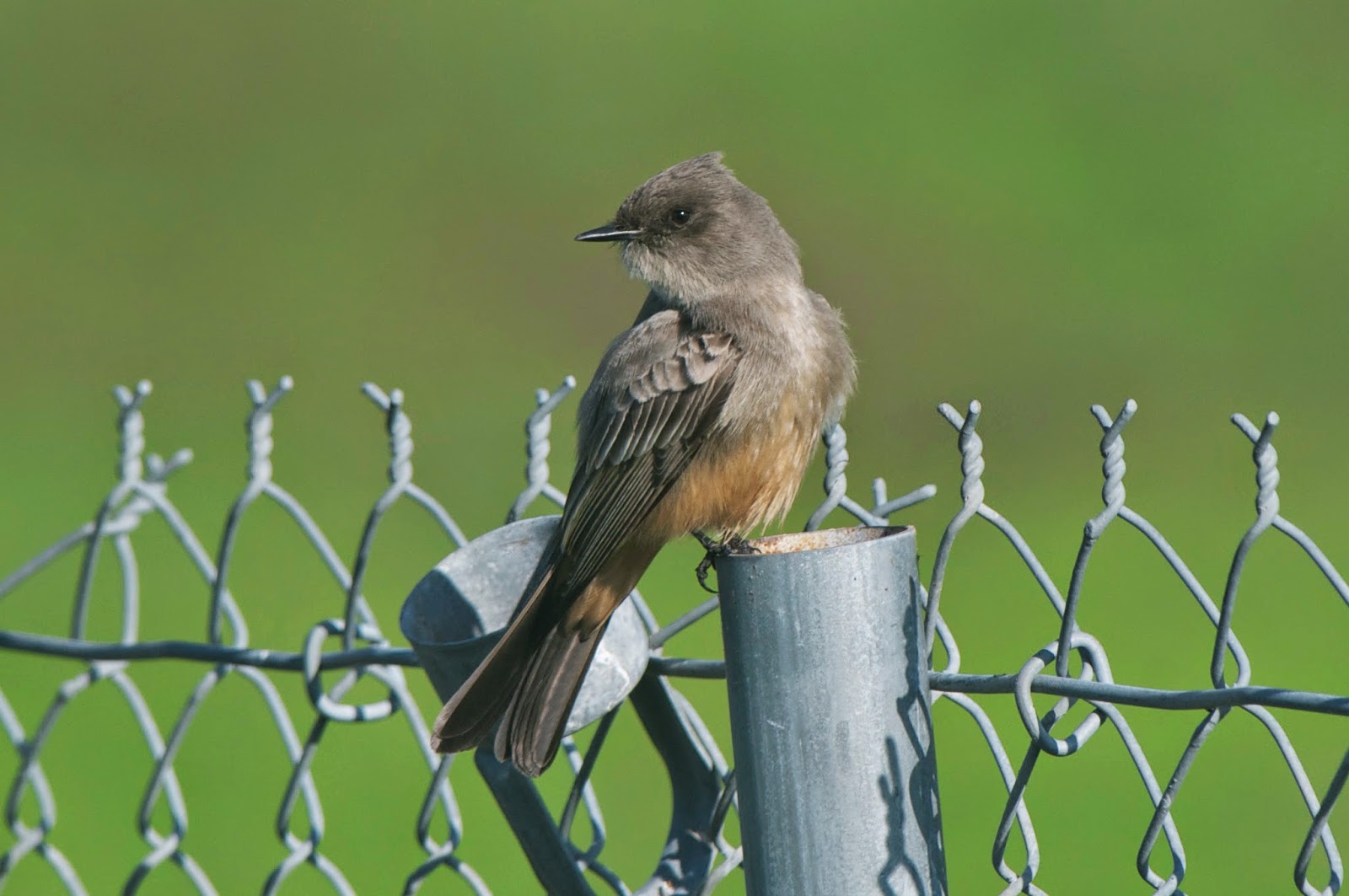 Although Don Nottoli Park sits next to the grassland, we owe the diversity here to the wooded pond that we walk around every visit.  I thought I'd take a few pictures so that you can see what I'm dealing with: 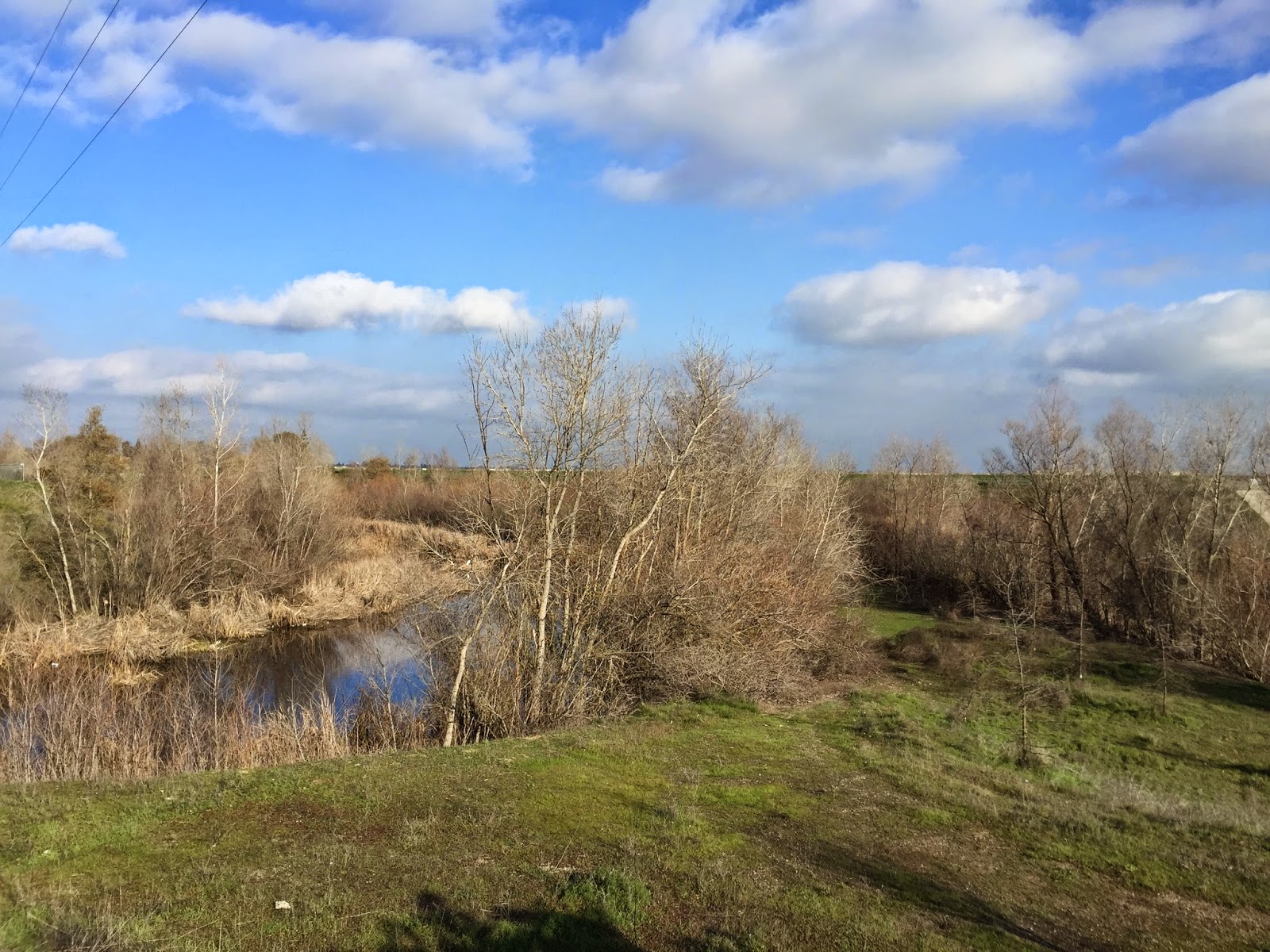 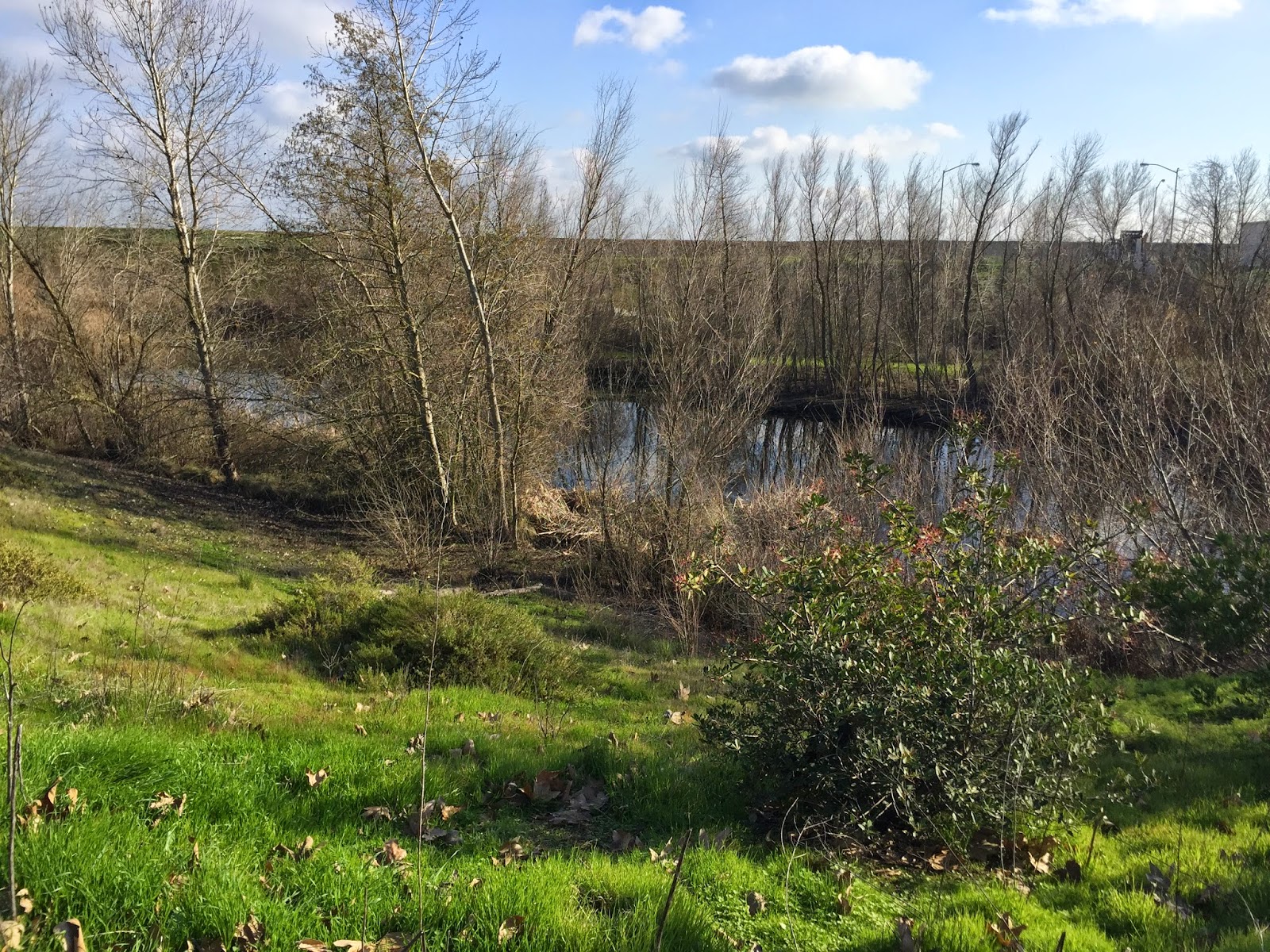 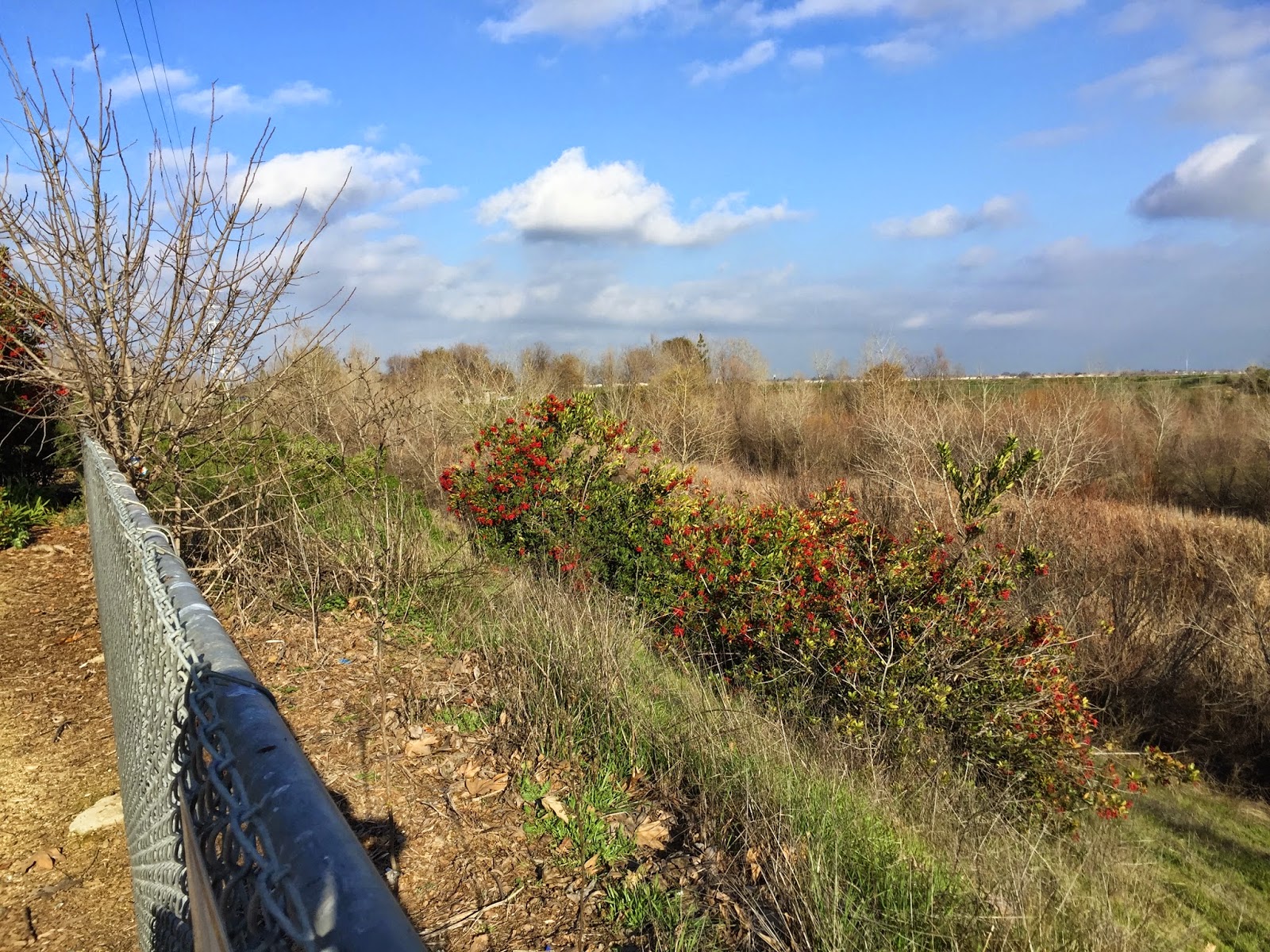 So yeah, it's nothing huge or impressive but next to the urban jungle, it acts as a migrant trap.  In different seasons, it's brought in birds such as YELLOW-BREASTED CHAT, MACGILLIVRAY'S WARBLER, OLIVE-SIDED FLYCATCHER, PACIFIC-SLOPE FLYCATCHER, BLUE GROSBEAK, WESTERN TANAGER, and even rare birds like BREWER'S SPARROW and GRAY FLYCATCHER.

Most of the time, however, it's not as gripping.  We often see things such as RED-SHOULDERED HAWKS, a very common species: 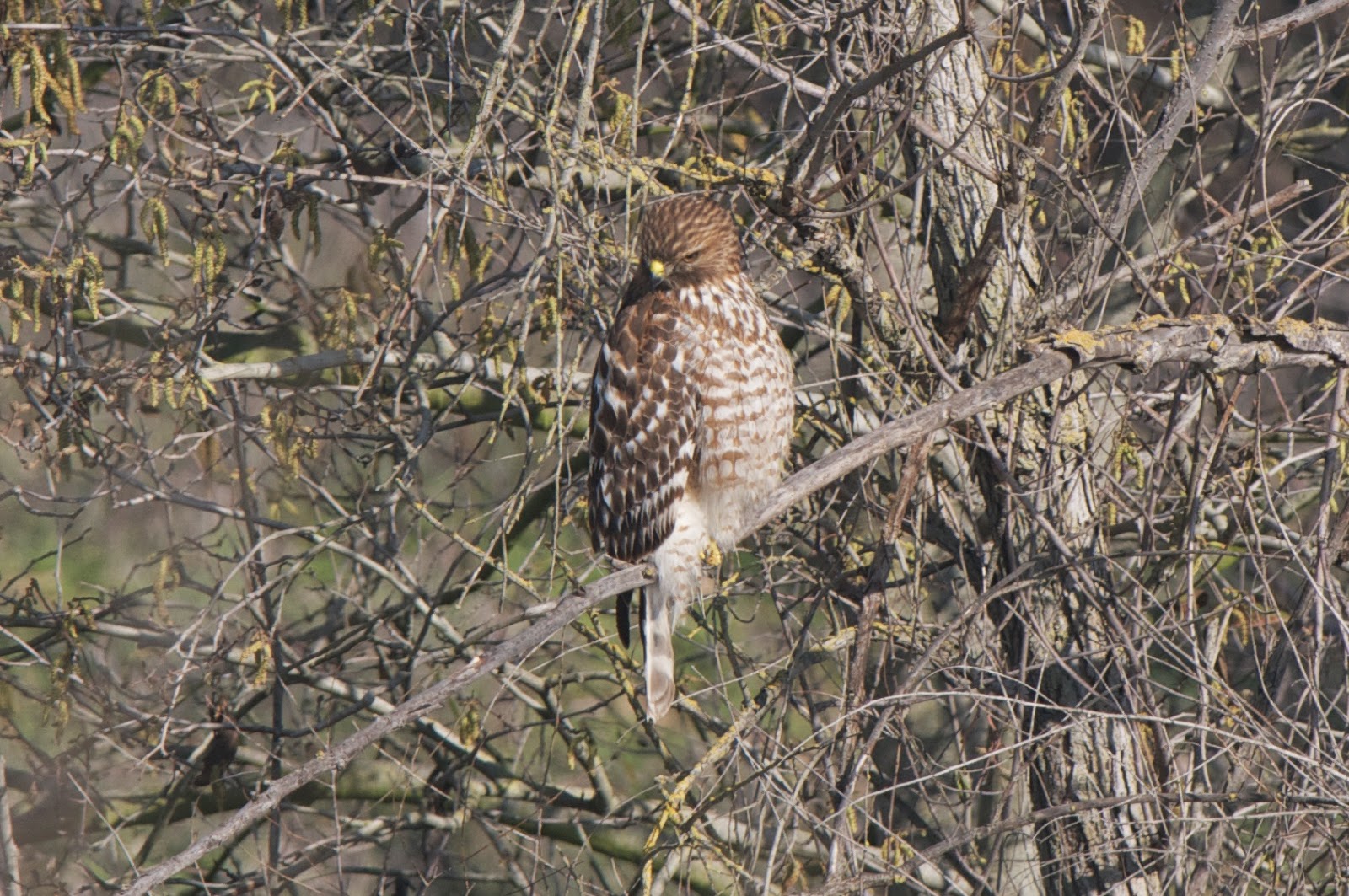 There are usually some COMMON GALLINULES skulking around somewhere too: 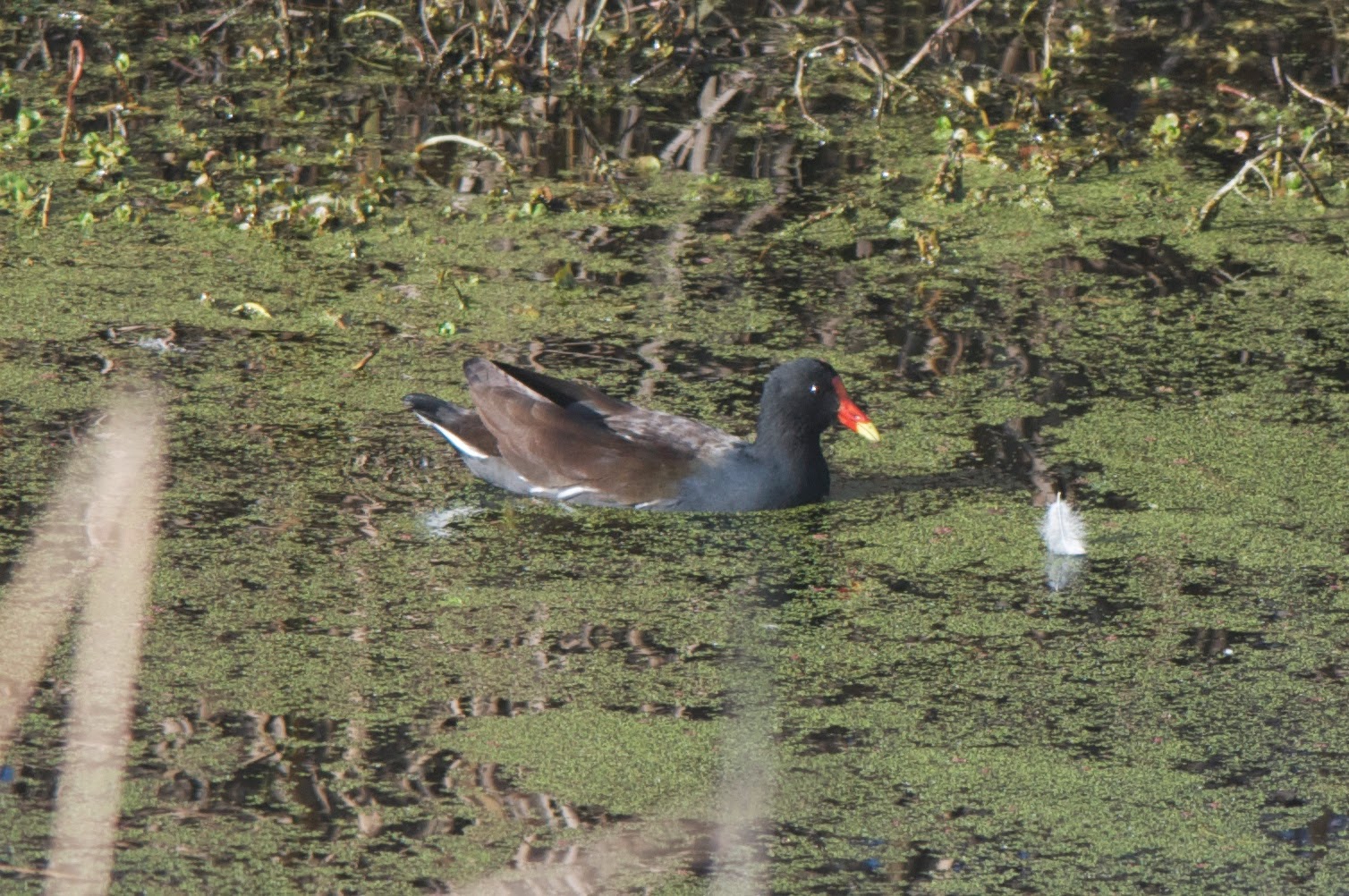 Although they're completely abundant, I snapped a picture of this particular NORTHERN MOCKINGBIRD anyway: 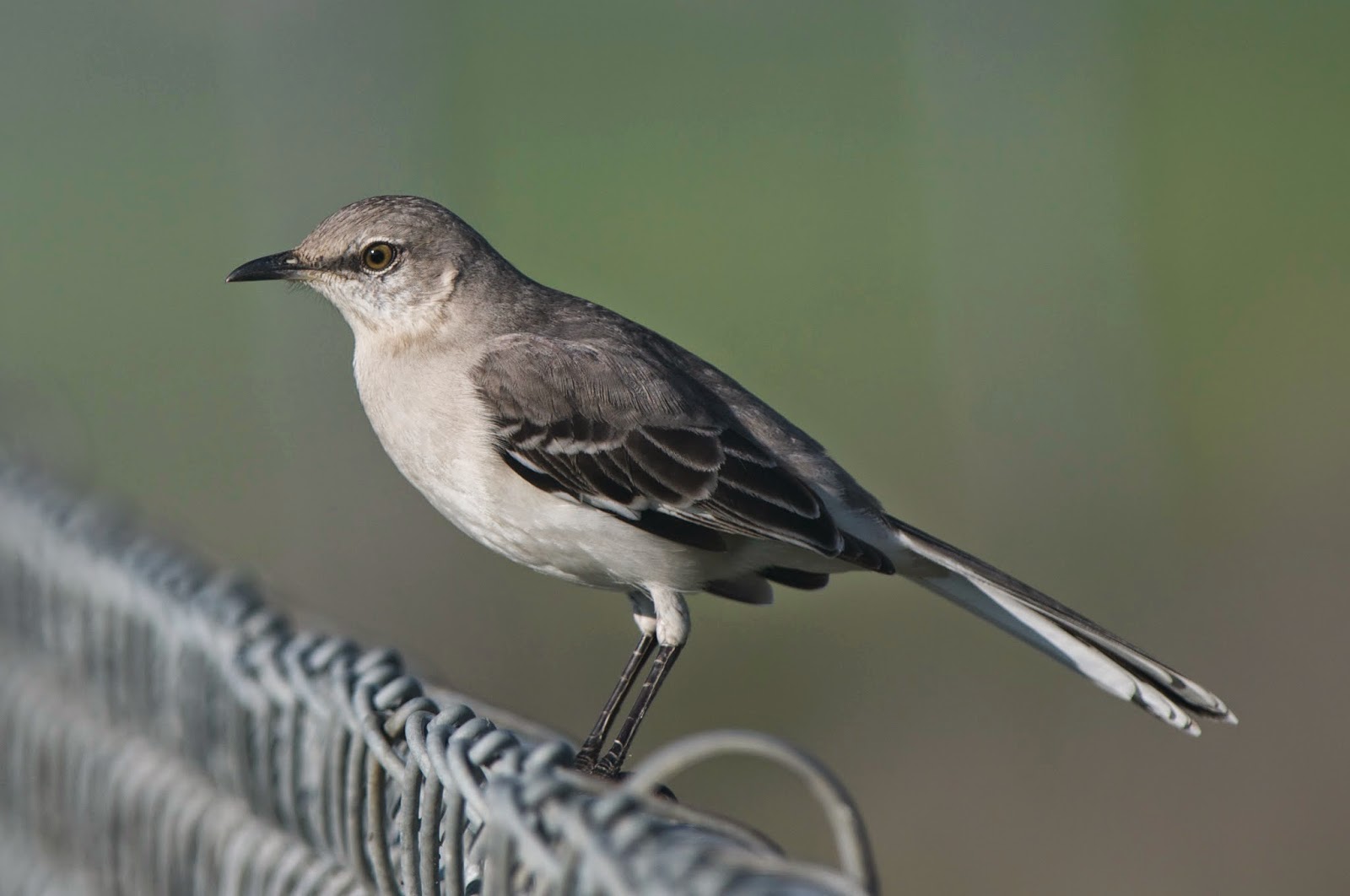 This local patch usually has a good number of sparrows, mostly GOLDEN-CROWNED, WHITE-CROWNED, and SAVANNAH.  However, we'll see SONG, FOX, and LINCOLN'S around too.  The rarest of the sparrows here are things like LARK, CHIPPING, BREWER'S, and DARK-EYED JUNCO.  Anyway, here's a fence full of GCSPs: 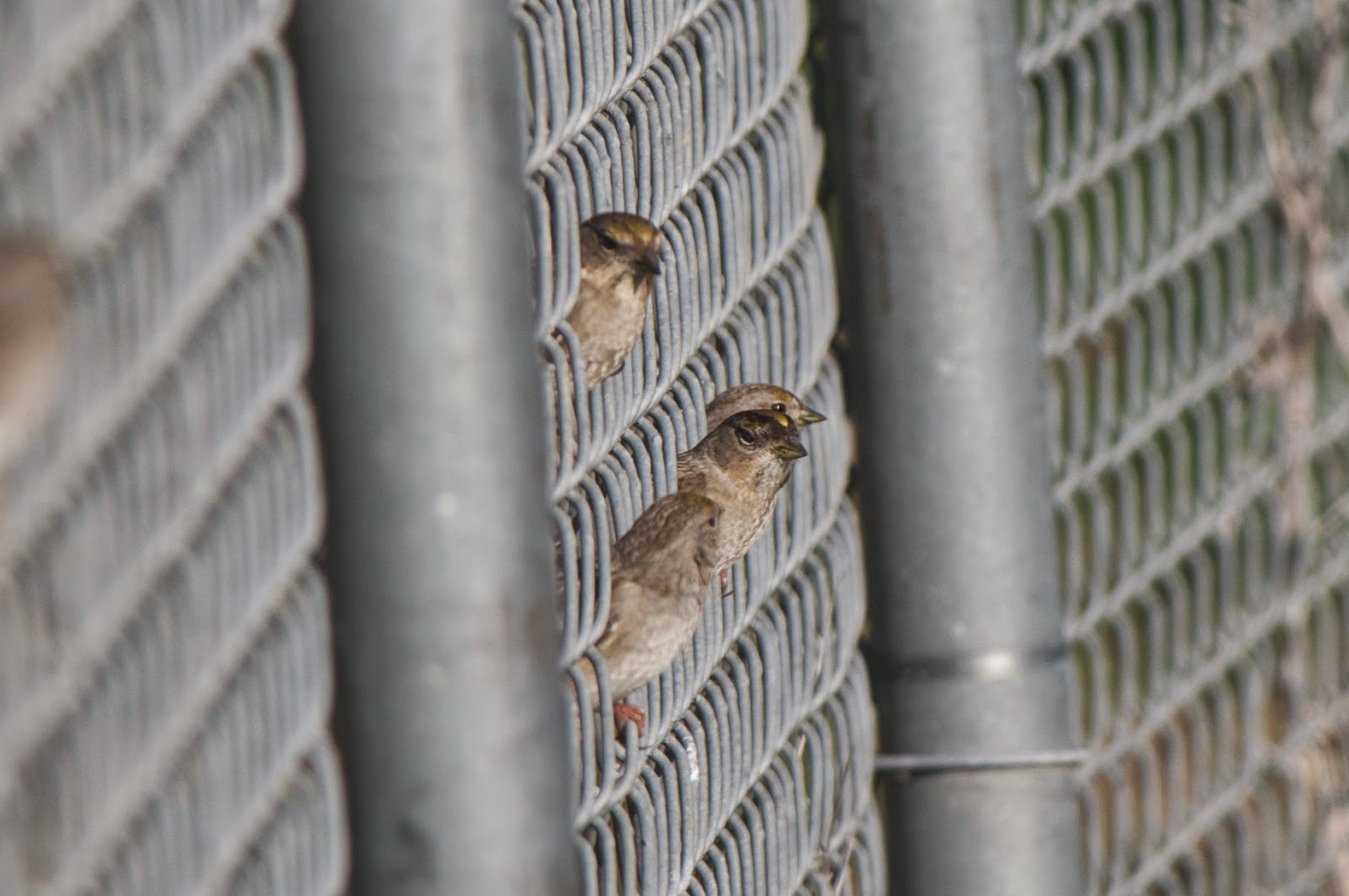 Speaking of sparrows, I was birding in extreme SW Sacramento County (down in the Delta), when I started looking at the WCSPs a little more carefully.  It started with this bird which I thought had a mighty yellow bill: 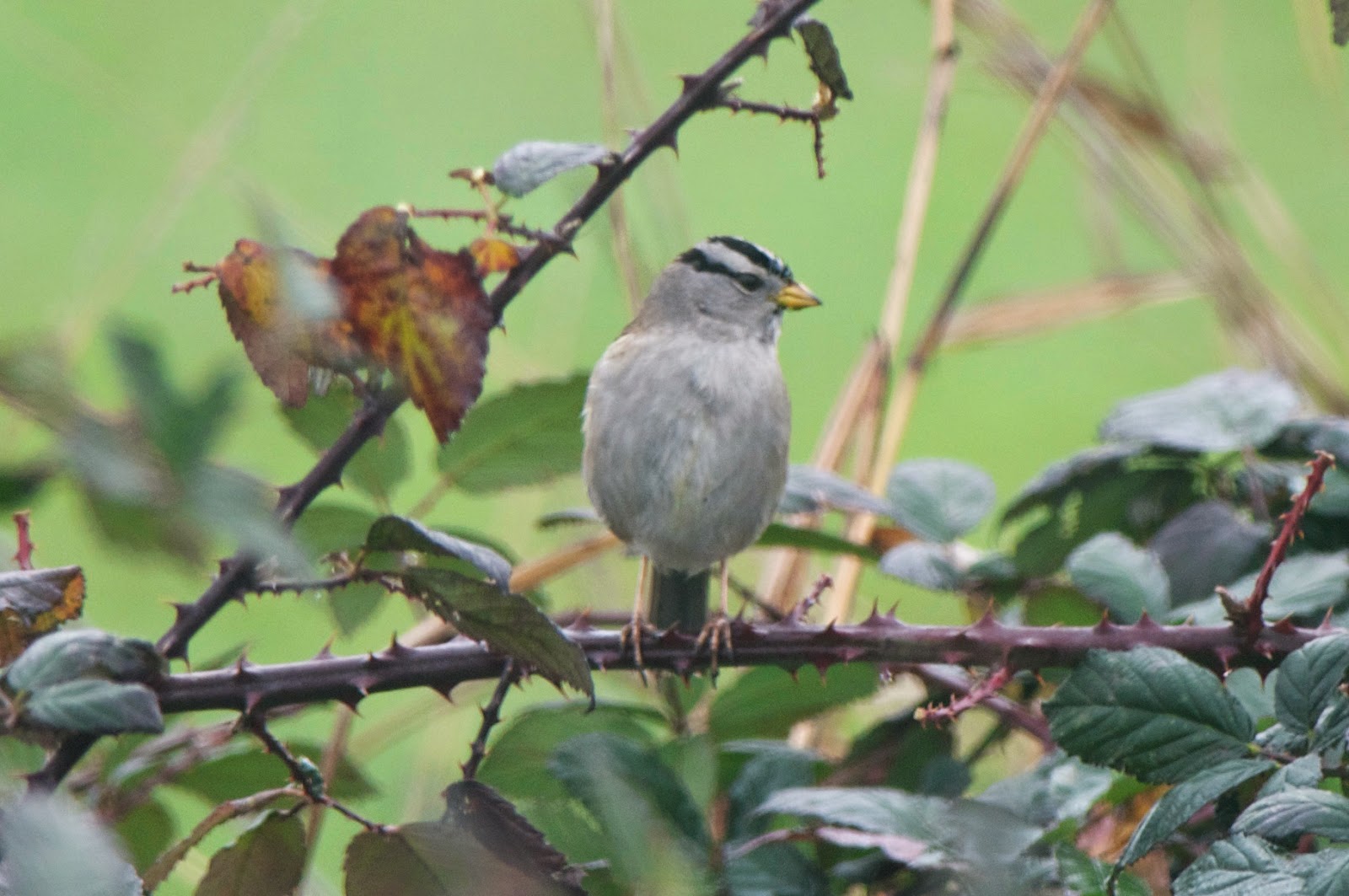 The question was simply "would I know if I were actually seeing pugetensis or nuttalli?"  Both of those races winter just an hour drive west of there.  Yes, gambelii is the most widespread and expected winter subspecies in the Central Valley but since all three of those races have pale lores, I started to wonder what I should be looking at.  Does the yellow bill of pugetensis and nuttalli stand out enough?  Because like I said, I kinda think the bill of the above bird looks pretty yellow and I'm betting it's still gambelii.

Anyway, here's another photo from the same spot 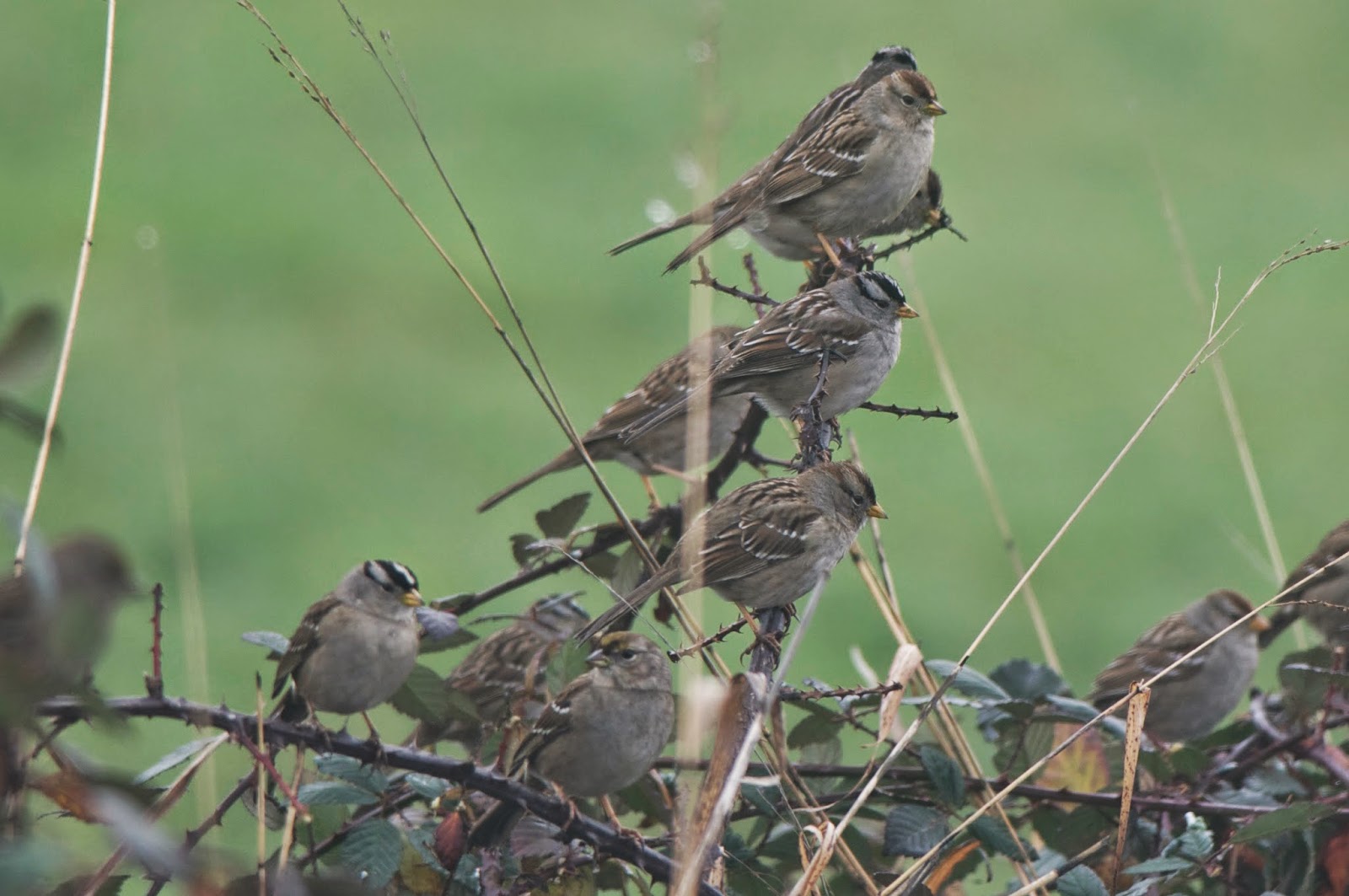 While we're talking about WCSPs, I may as well share this picture too, taken from my patio in Elk Grove: 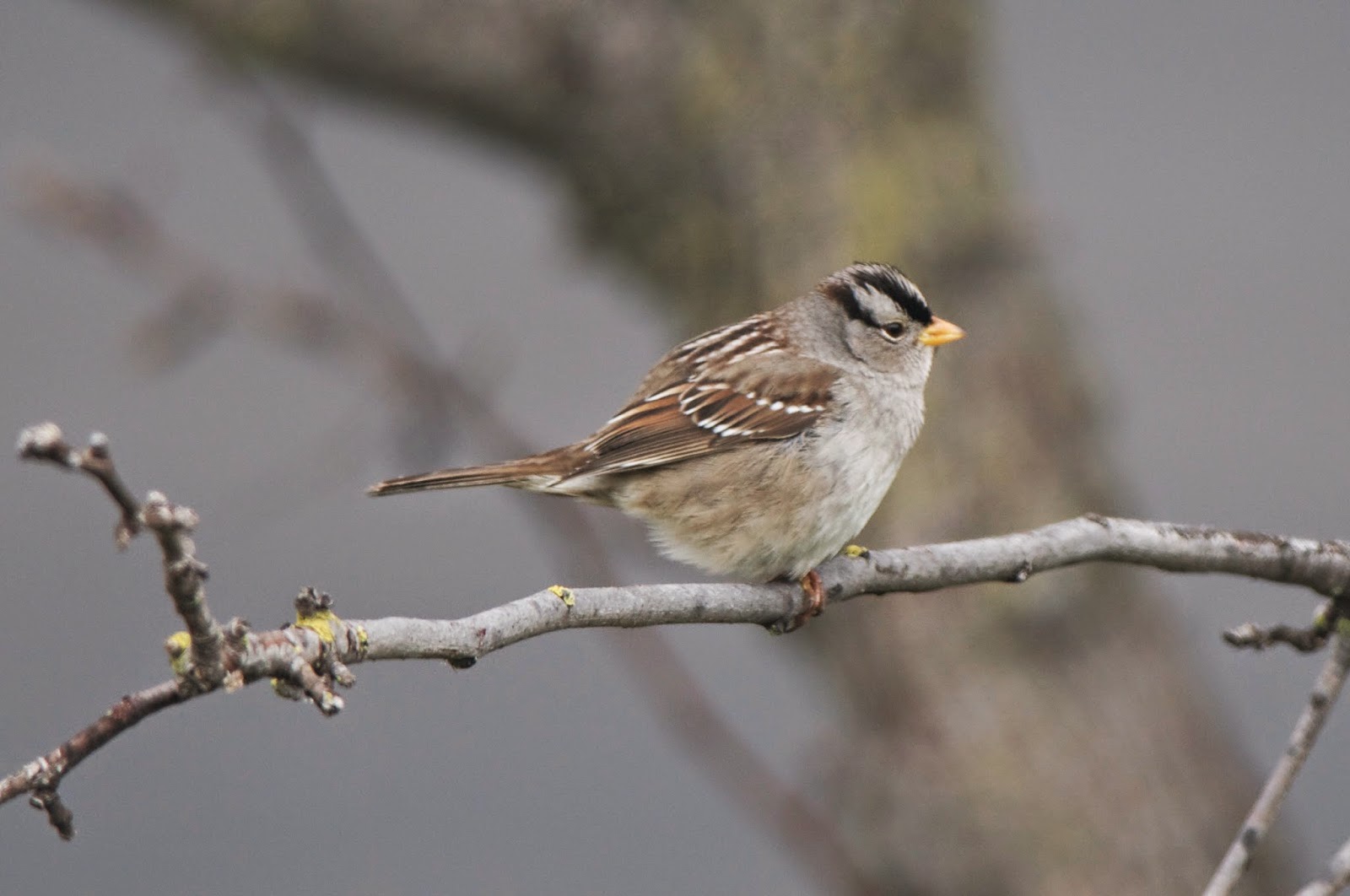 It's always a bit of a treat when we see sparrows in the heavily manicured urban neighborhood I'm in.  In here, sparrows are pretty uncommon and things like wrens are downright rare.  You can imagine my surprise then when I found this HERMIT THRUSH in some leaf litter below the patio: 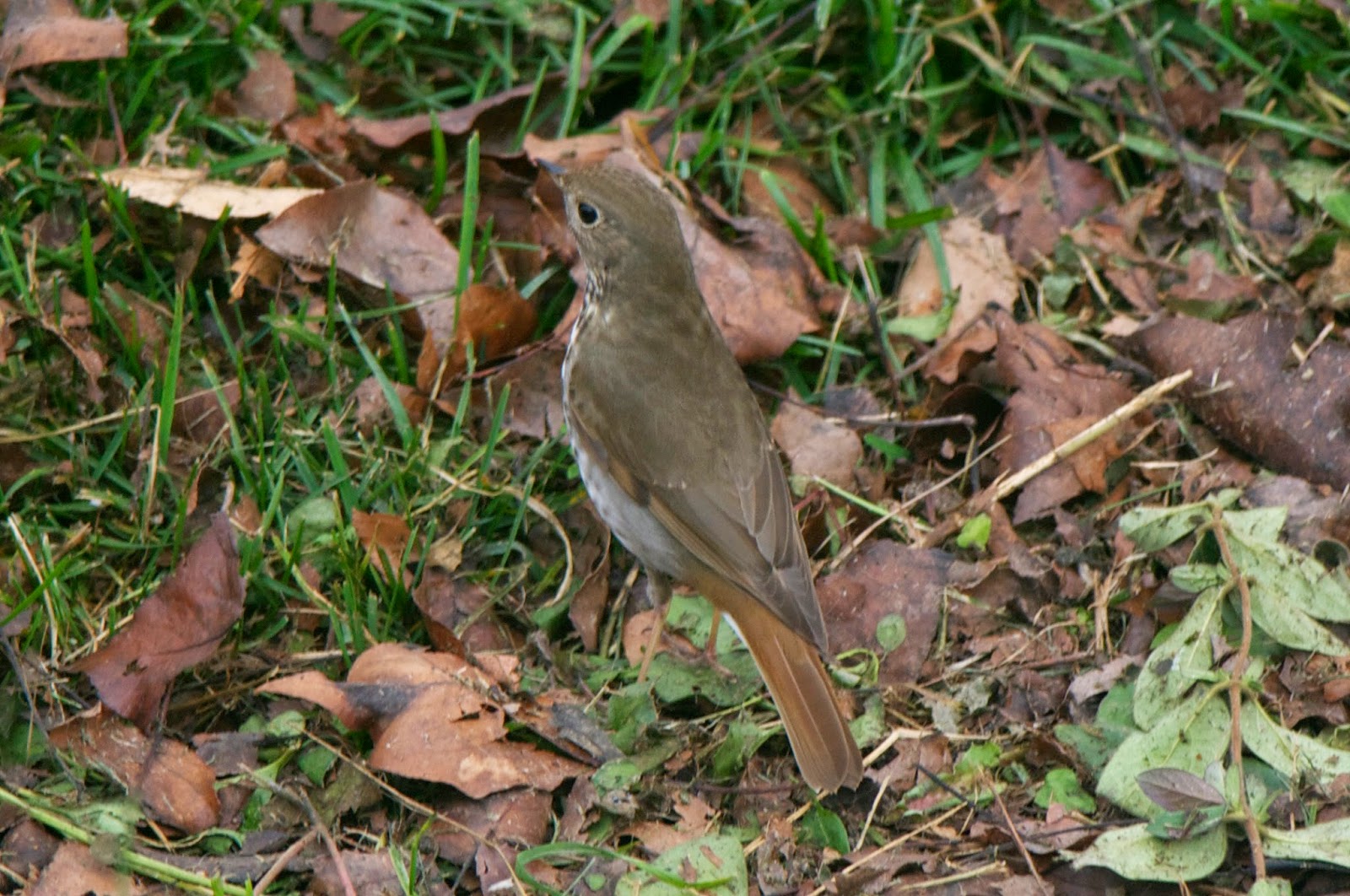 That was certainly a first record for the yard.