Even though we had birded both January 1 and 2, we weren't quite done with the long weekend yet.  We were, simply put, on a hunt for county year birds.  This post is devoted to our recent snags for the year list.  Less words, more pictures.  Go.

First up, we headed to Cosumnes to target things like GOLDEN-CROWNED KINGLET.  It took us a while but it worked out in the end: 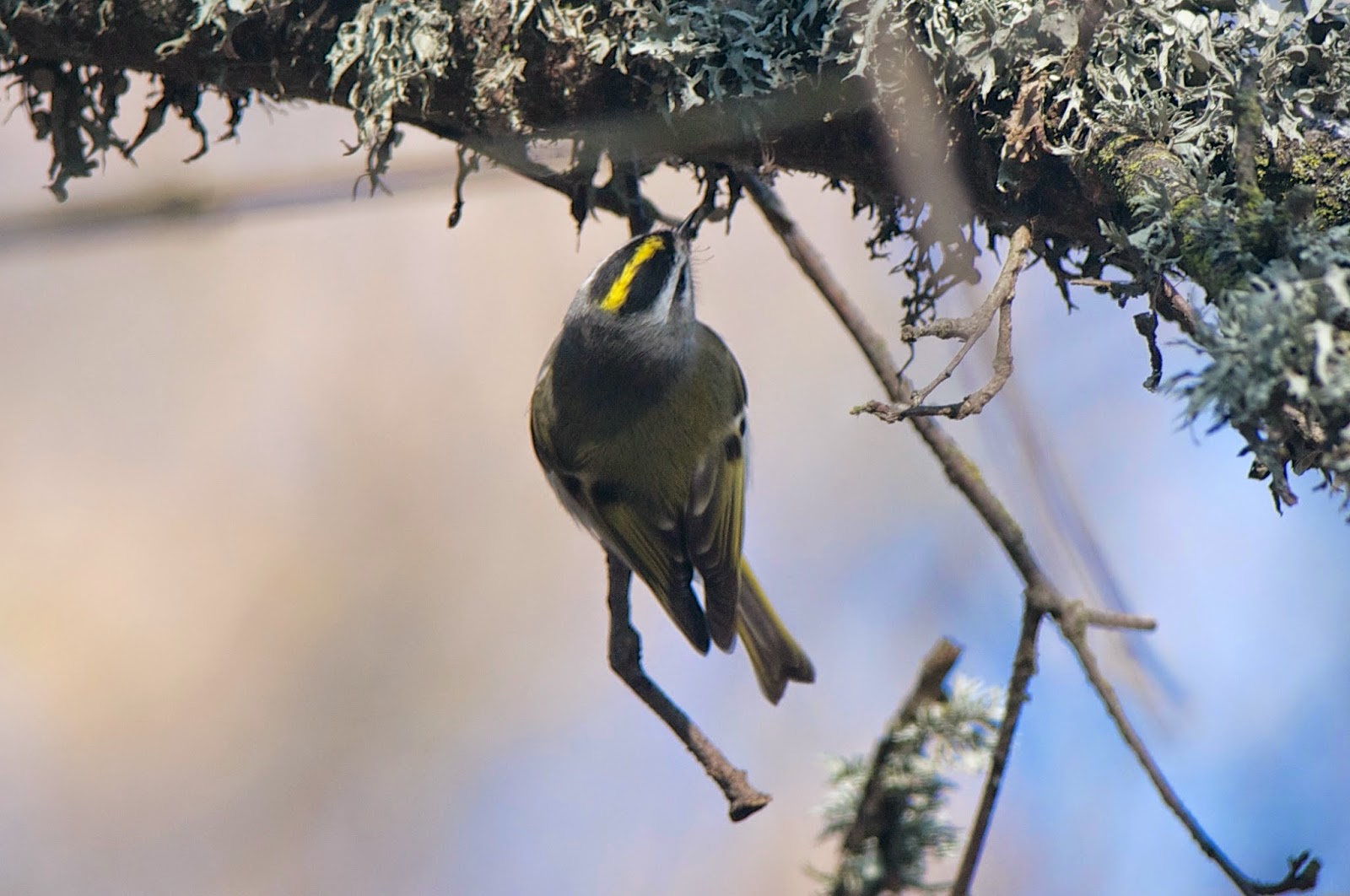 And it's hard to ignore other non-year birds along the way like this AMERICAN KESTREL: 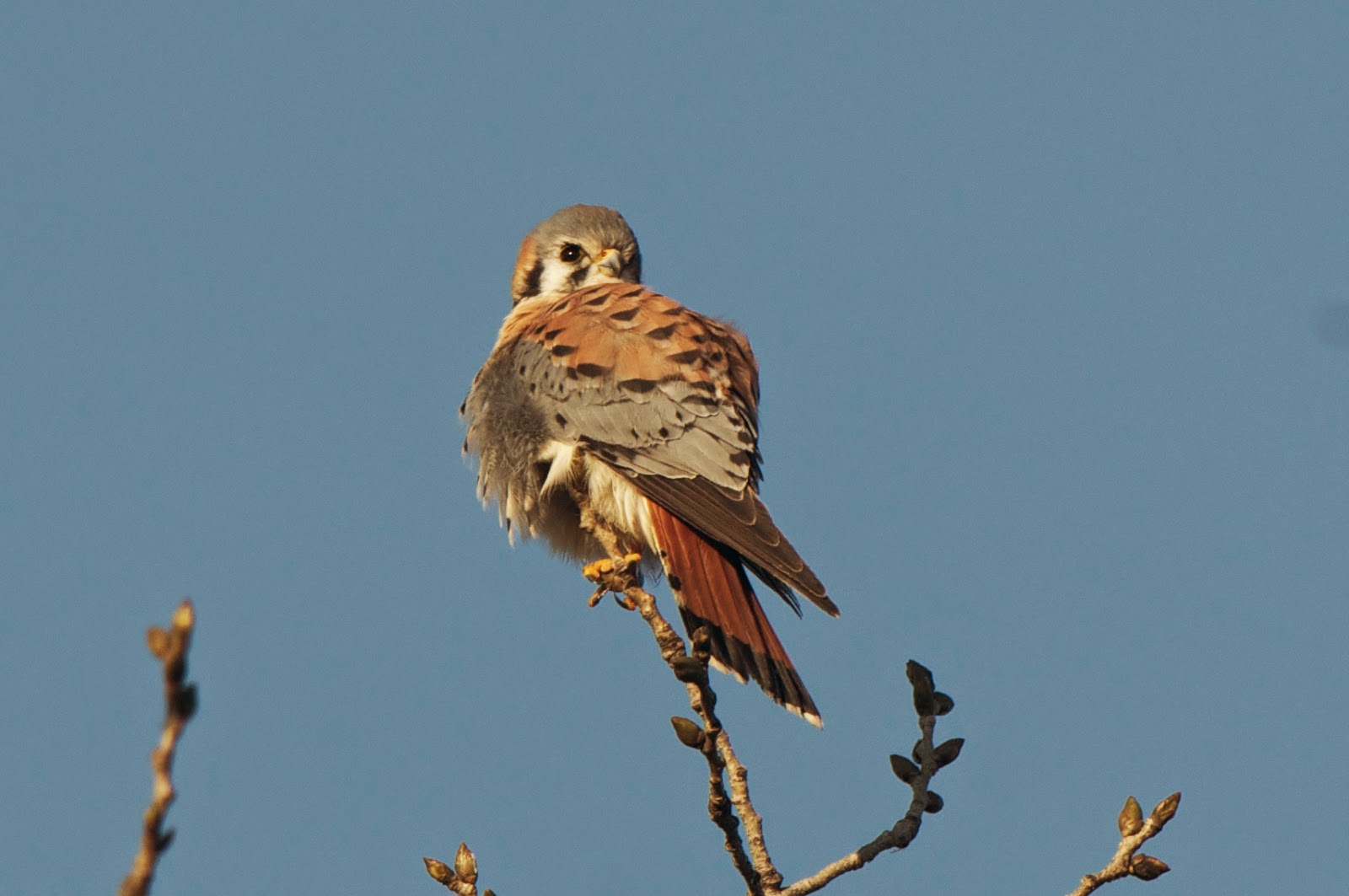 A male CINNAMON TEAL doesn't exactly blend in with coots all that well: 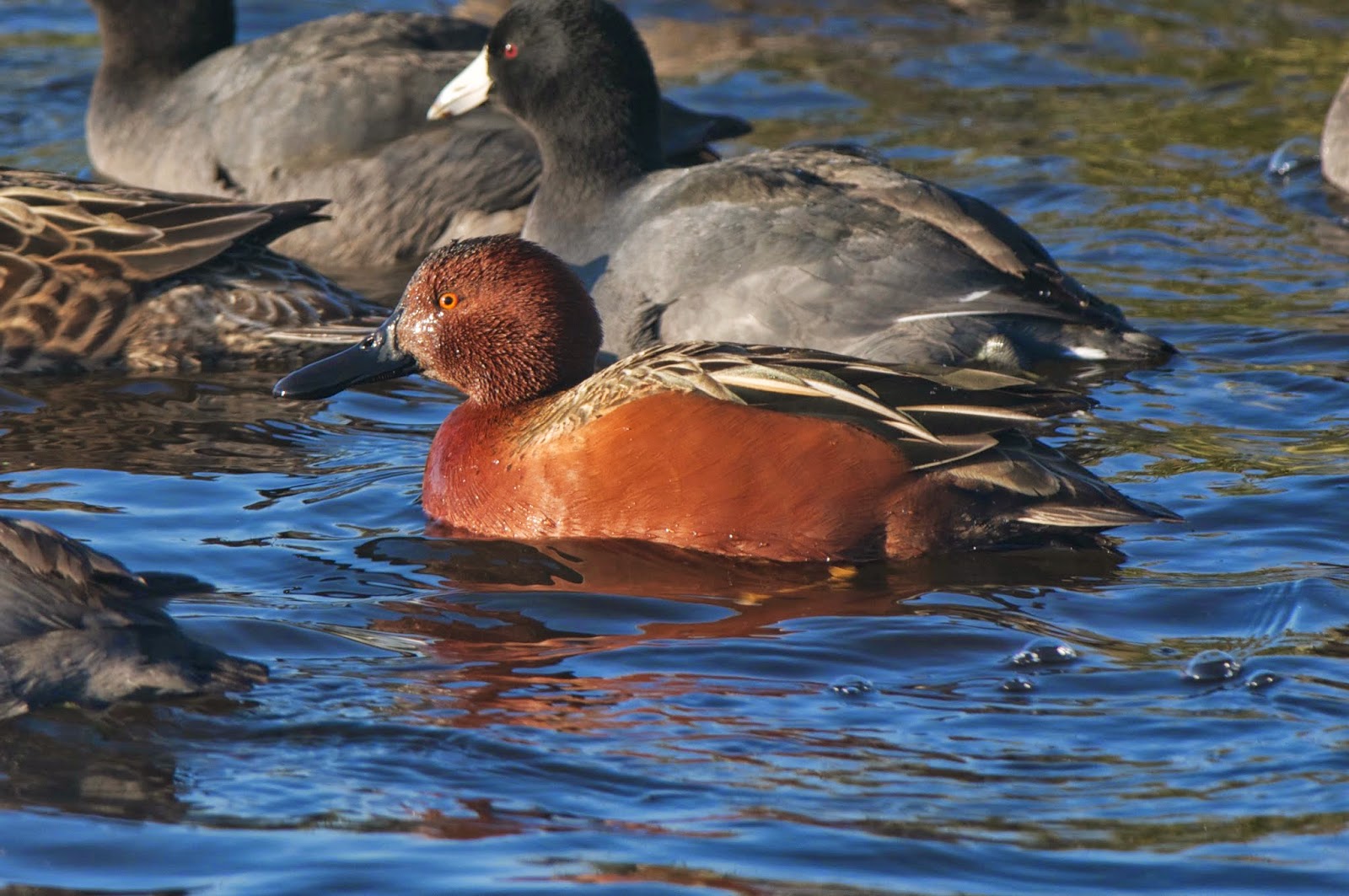 I visited the City Cemetery targeting BROWN CREEPER and RED-BREASTED NUTHATCH.  Managed to find both.  Here's the latter: 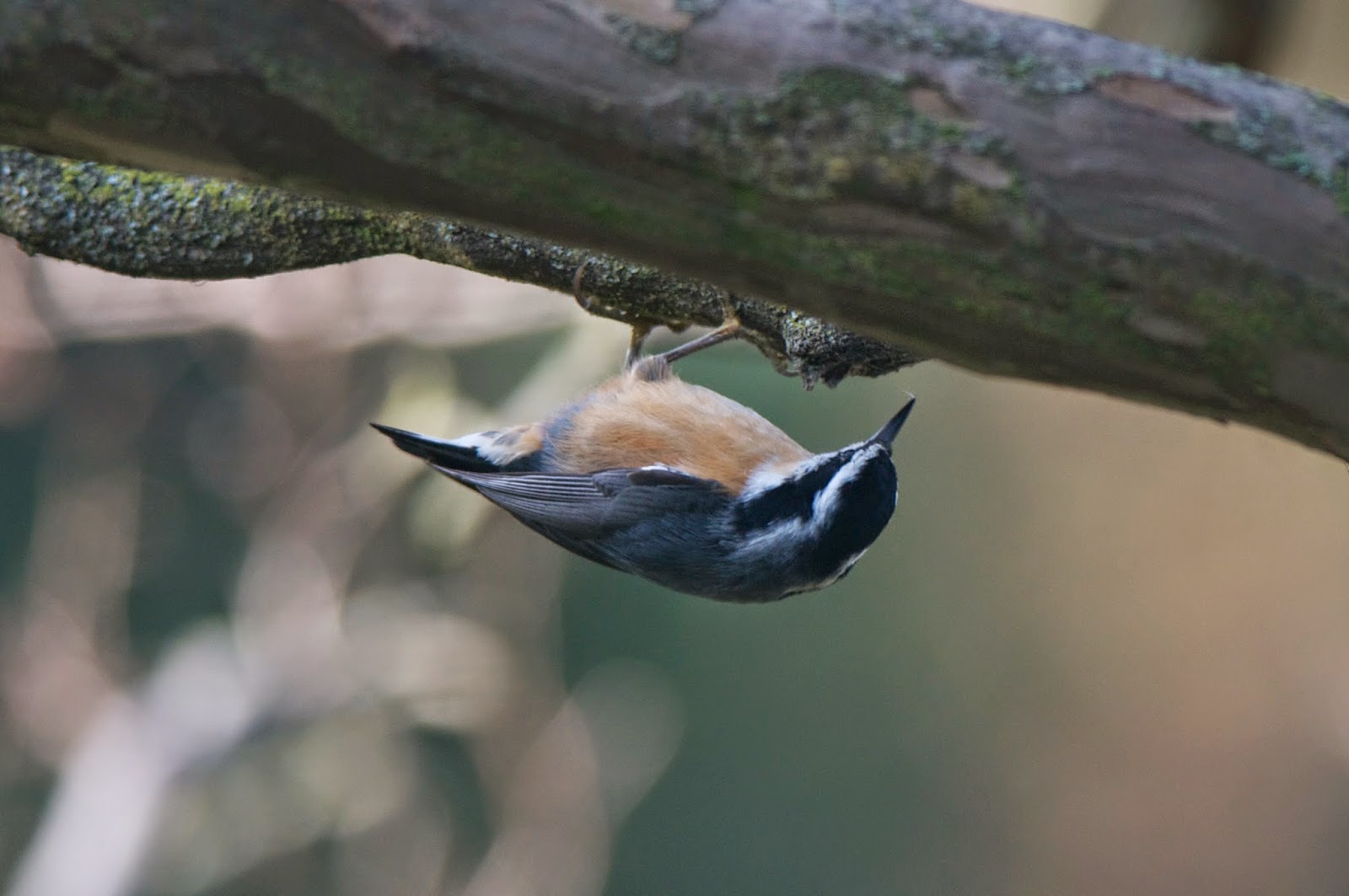 I birded William Land Park in Sacramento hoping to bump into the Hammond's Flycatcher that has been seen sporadically there this winter.  No luck with the flycatcher but I found my year TOWNSEND'S WARBLER and photographed the HOODED MERGANSERS there: 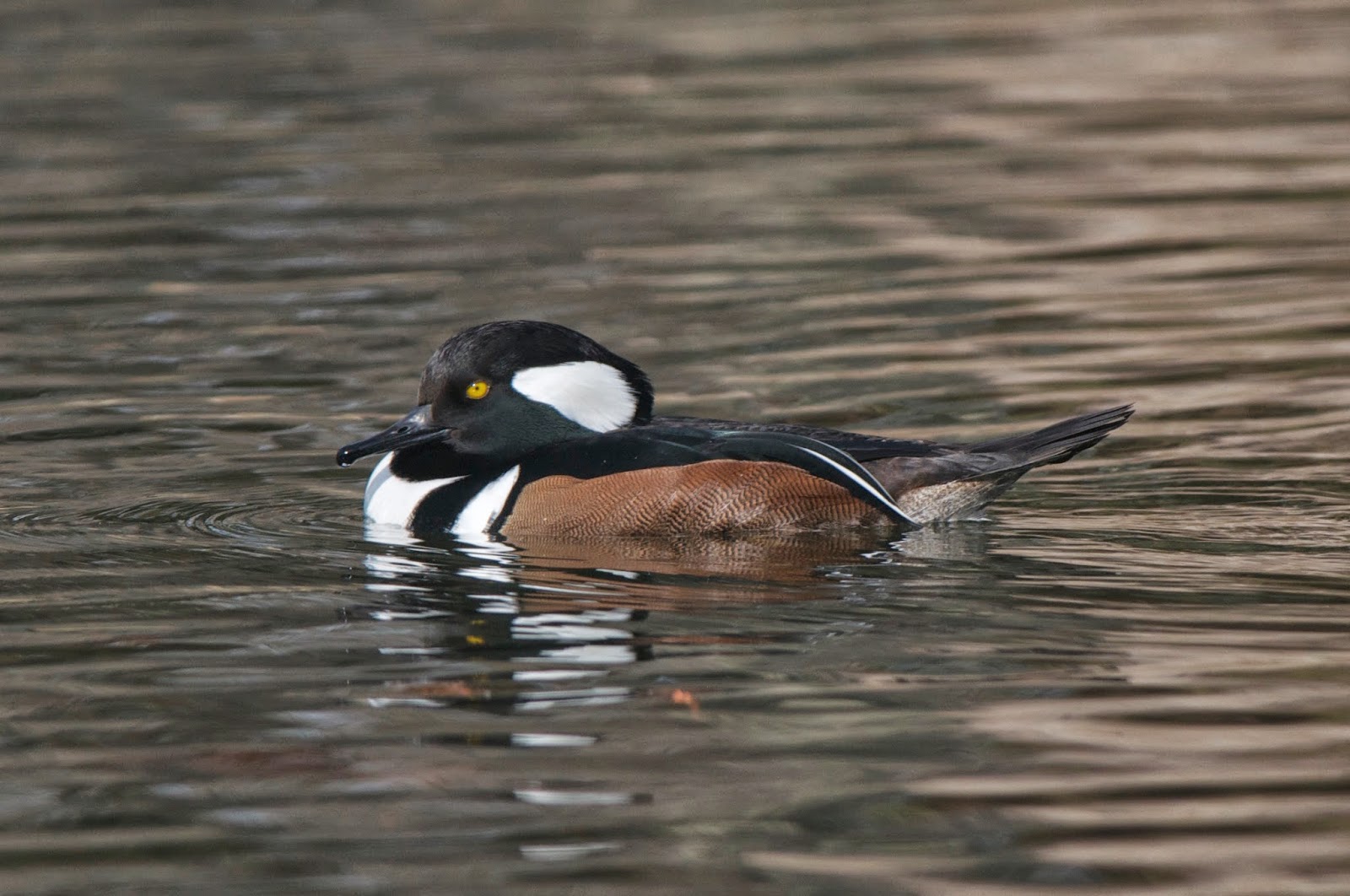 I hit up the Blue Heron Trail portion of Stone Lakes NWR; I had a hunch it was my best shot at AMERICAN WHITE PELICANS.  Apparently they agreed: 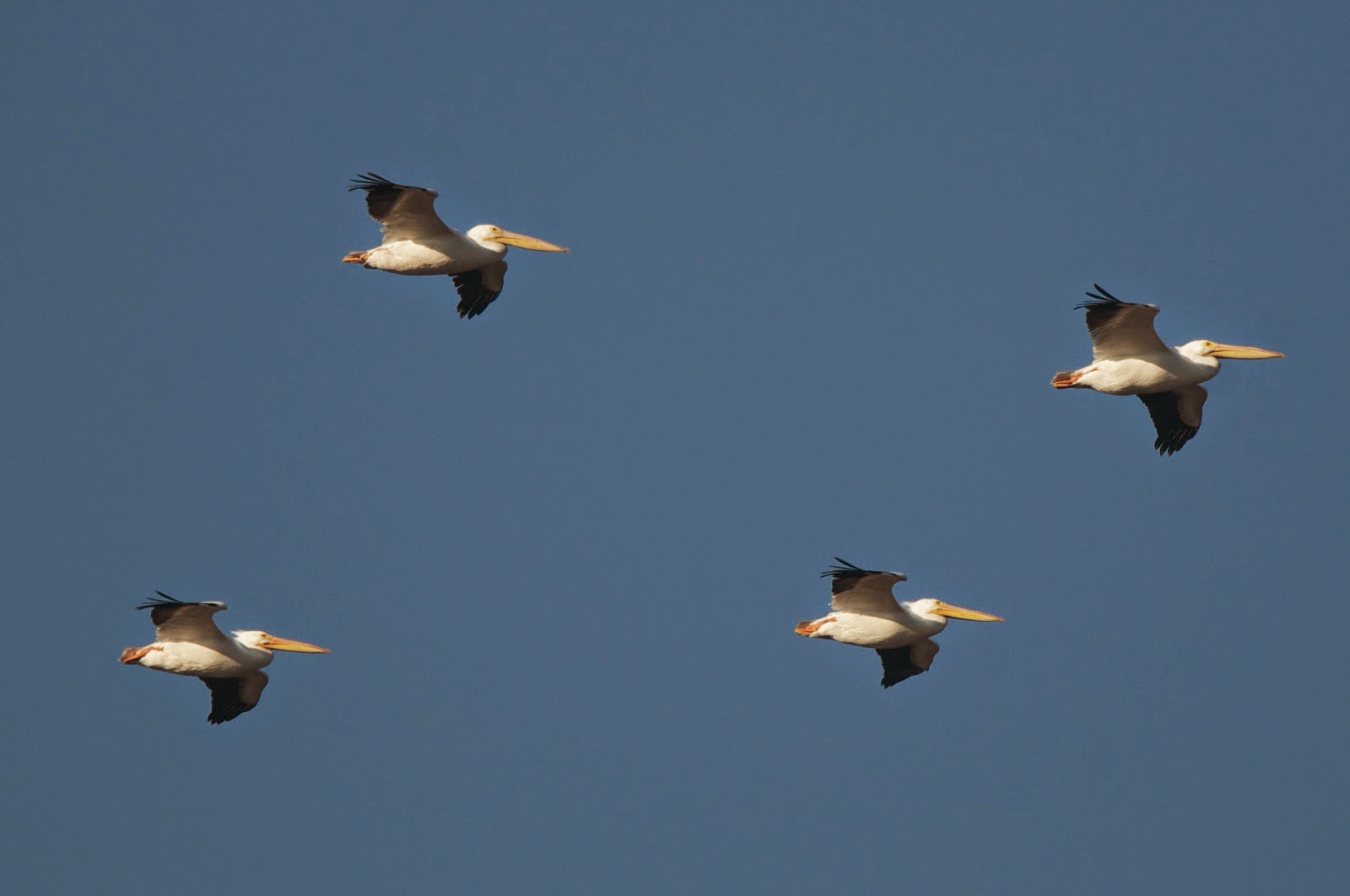 A spin to Camden Park didn't yield any Black-crowned Night-Herons, a species I still need for the year, but there was still a male BARROW'S GOLDENEYE on the lake.  Sharp looking dude: 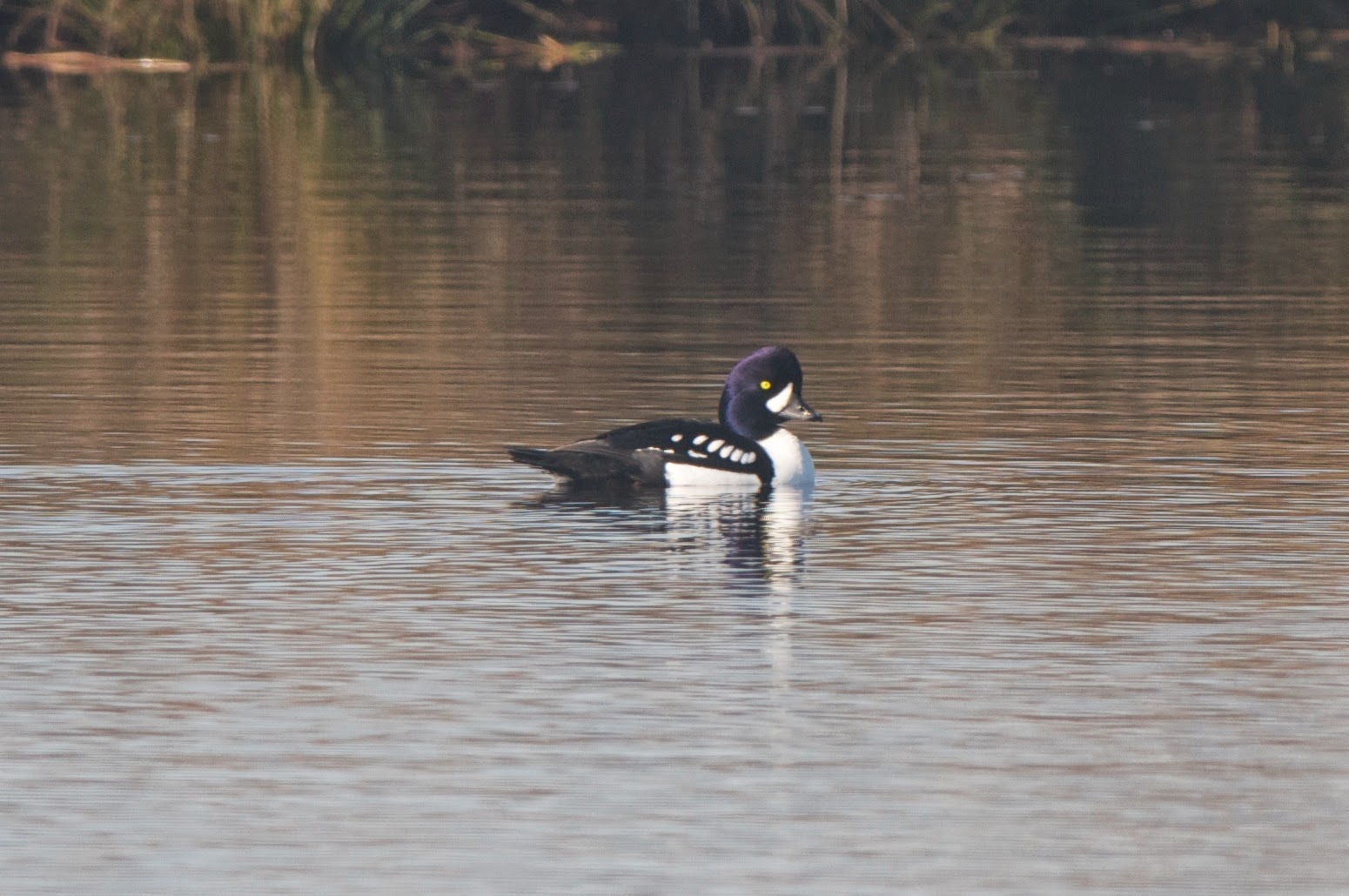 There were also several PINE SISKINS there at the park.  Although it wasn't a year bird, I think it might have been the first record of that species for this local patch: 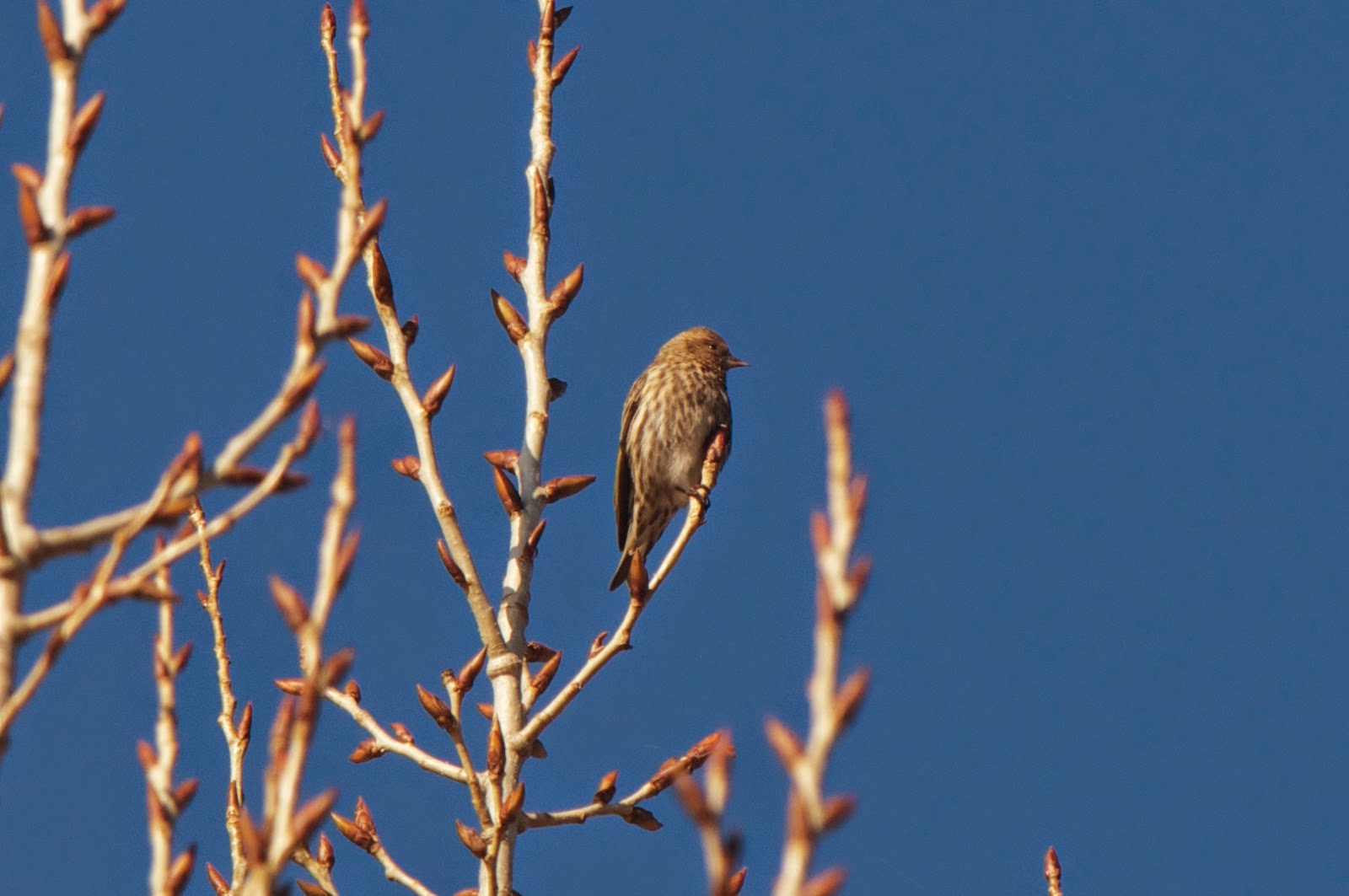 Also at Camden, there were two freaky ORANGE-CROWNED WARBLERS.  I'm not sure if anything is wrong with these birds but they don't look right to me!  Ruffled forehead feathers, messed up eyes, and a giant bill (or maybe just accentuated by the chewed-up forehead).  Strangly, BOTH birds looked like this: 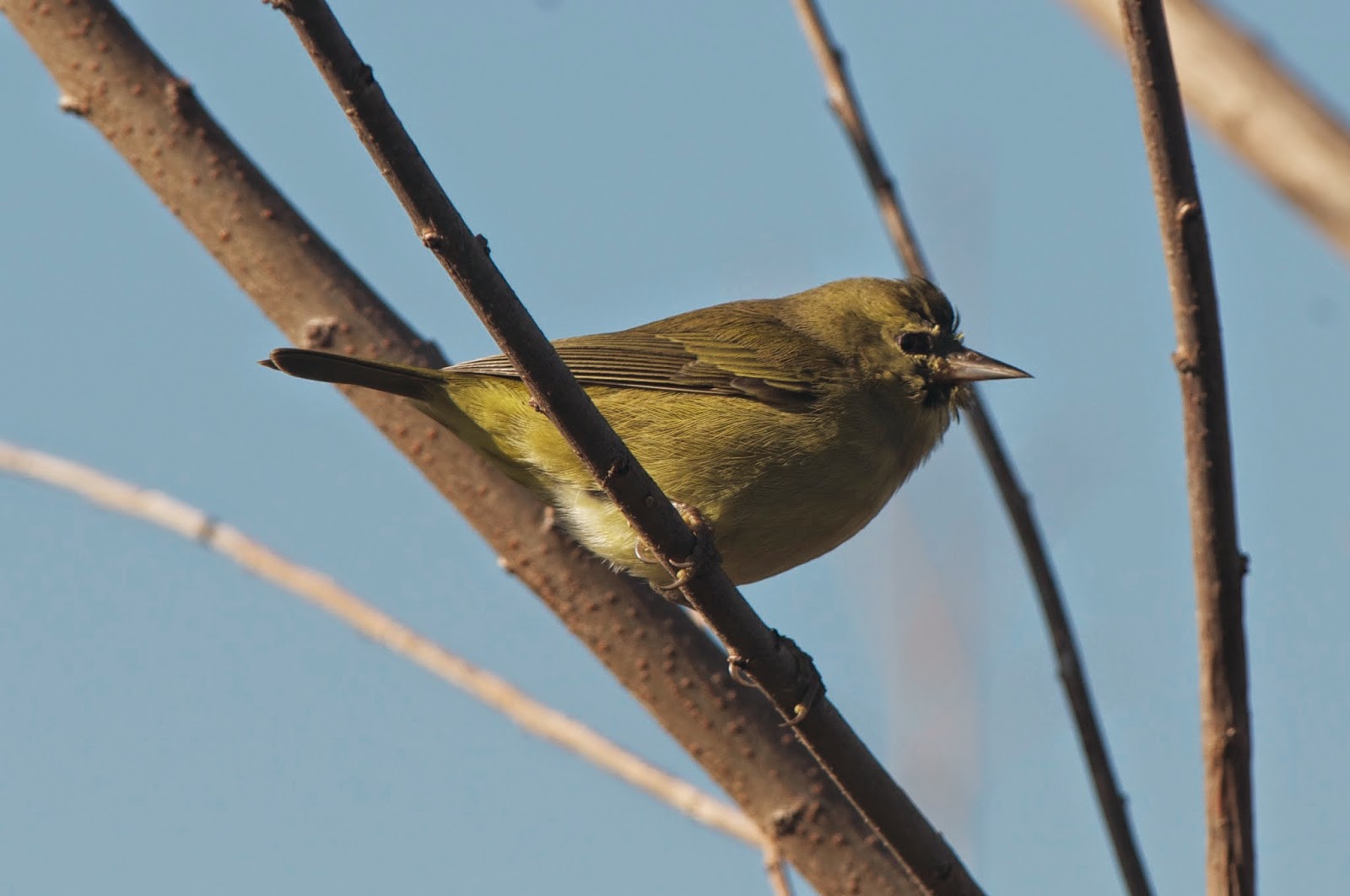 A visit to the Folsom Rodeo Grounds was in store to target HUTTON'S VIREO and RUFOUS-CROWNED SPARROW.  I picked up a bonus WILD TURKEY along the way, managed to hear the RCSPs, and this HUVI was obliging: 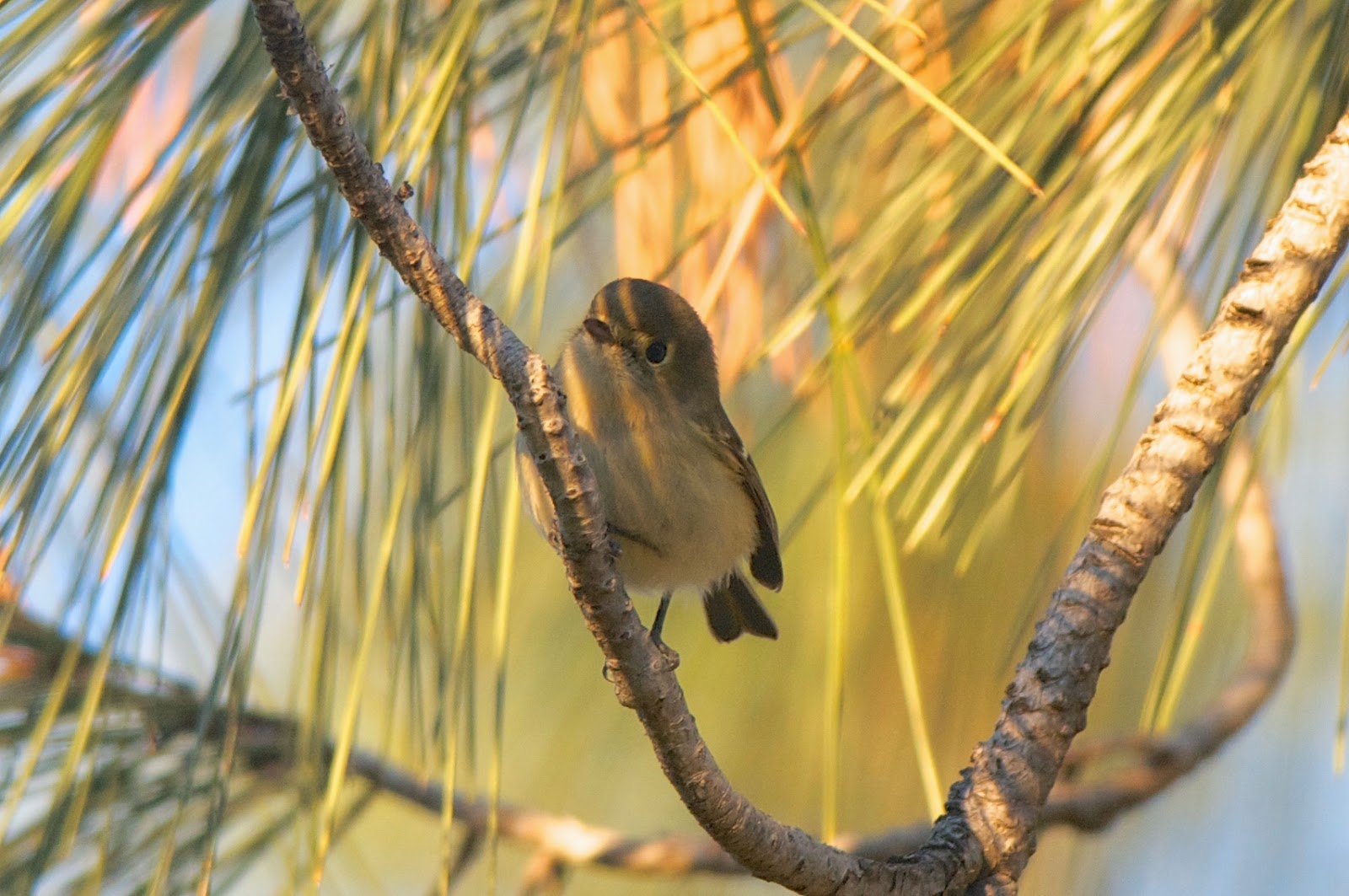 Birders found a STELLER'S JAY on a CBC at a park I had never been to before.  Since it was a year bird, away to Lew Howard Park I went.  I actually found one before I even parked; it flew right over the road as I was arriving.  That's stupid.  Here's a documentation pic: 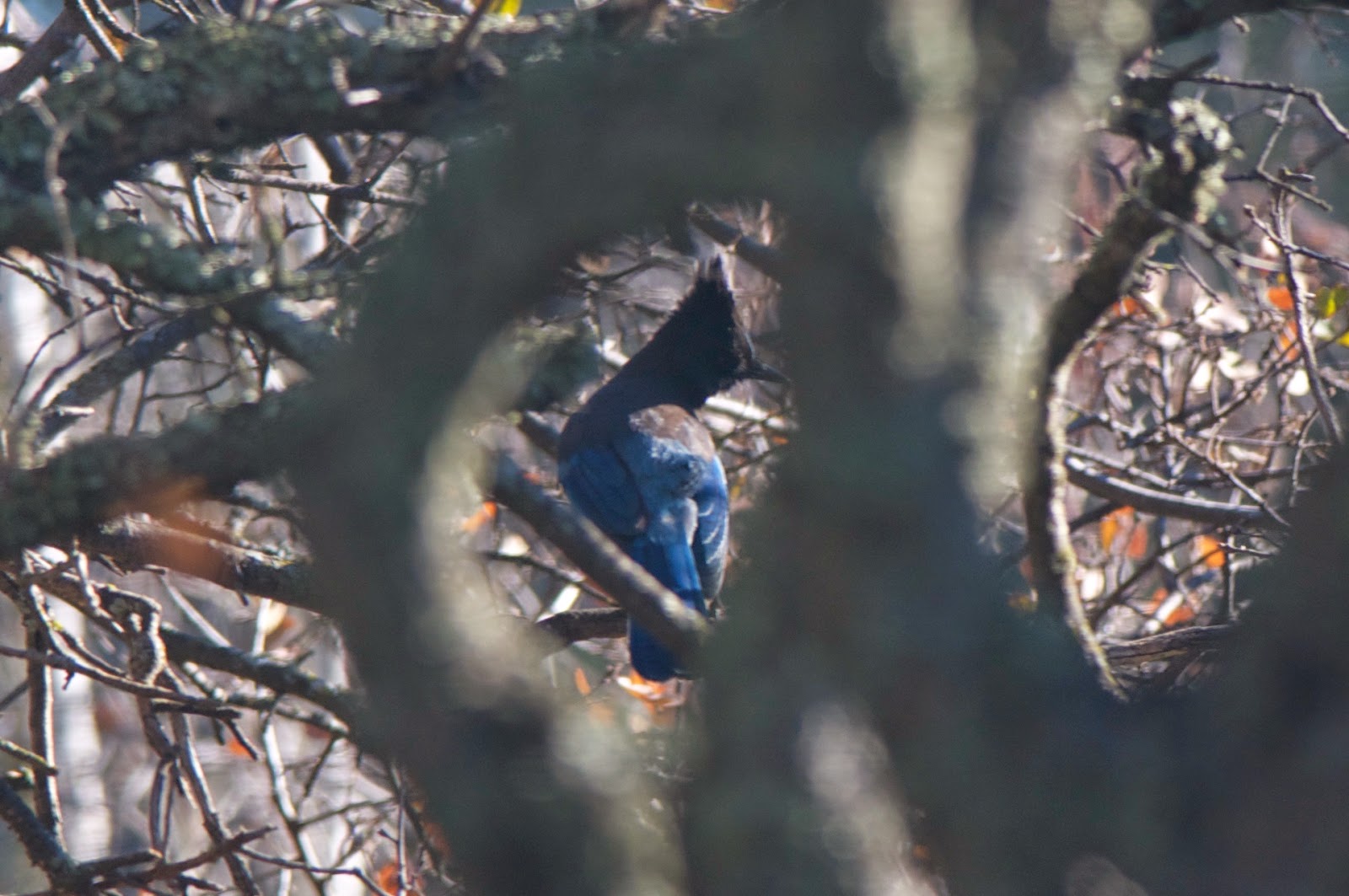 It was here that my attention was drawn to some interesting notes coming from the top of a tree.  For the life of me, I thought it sounded similar to a vireo singing!  Keen to find the culprit, I searched until this PURPLE FINCH popped into view.  What the crap?  Here's a picture of the bird: 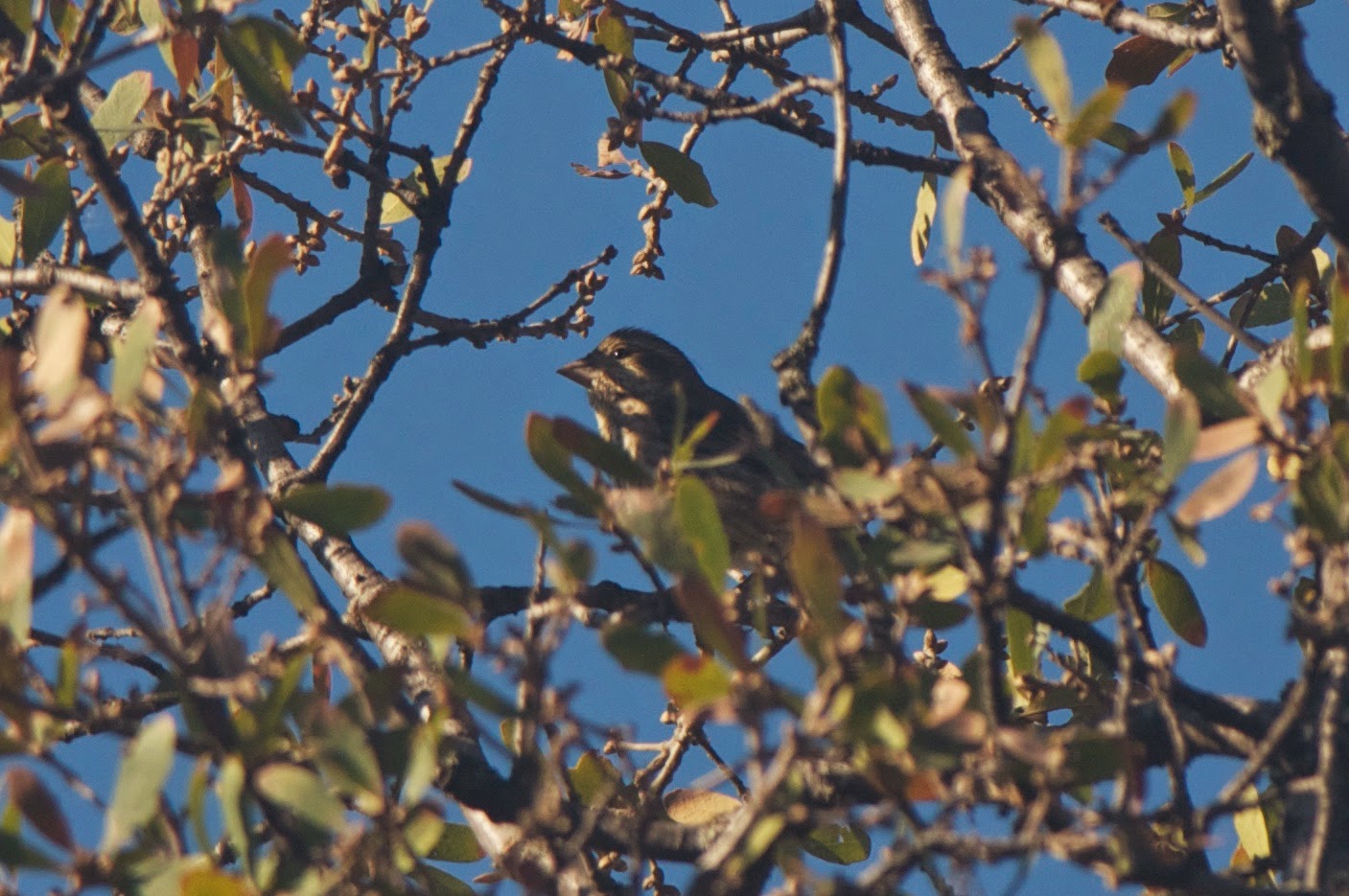 Take a listen to this recording of a PUFI from Vancouver, see what I mean?  Now I know.


I ventured back to Nimbus Fish Hatchery to see if there were any odd gulls around.  I didn't see our ICGU from before so I instead took pictures of mixed goldeneye flocks.  Here are two male BARROW'S GOLDENEYE on the left and two male COMMON GOLDENEYE on the right: 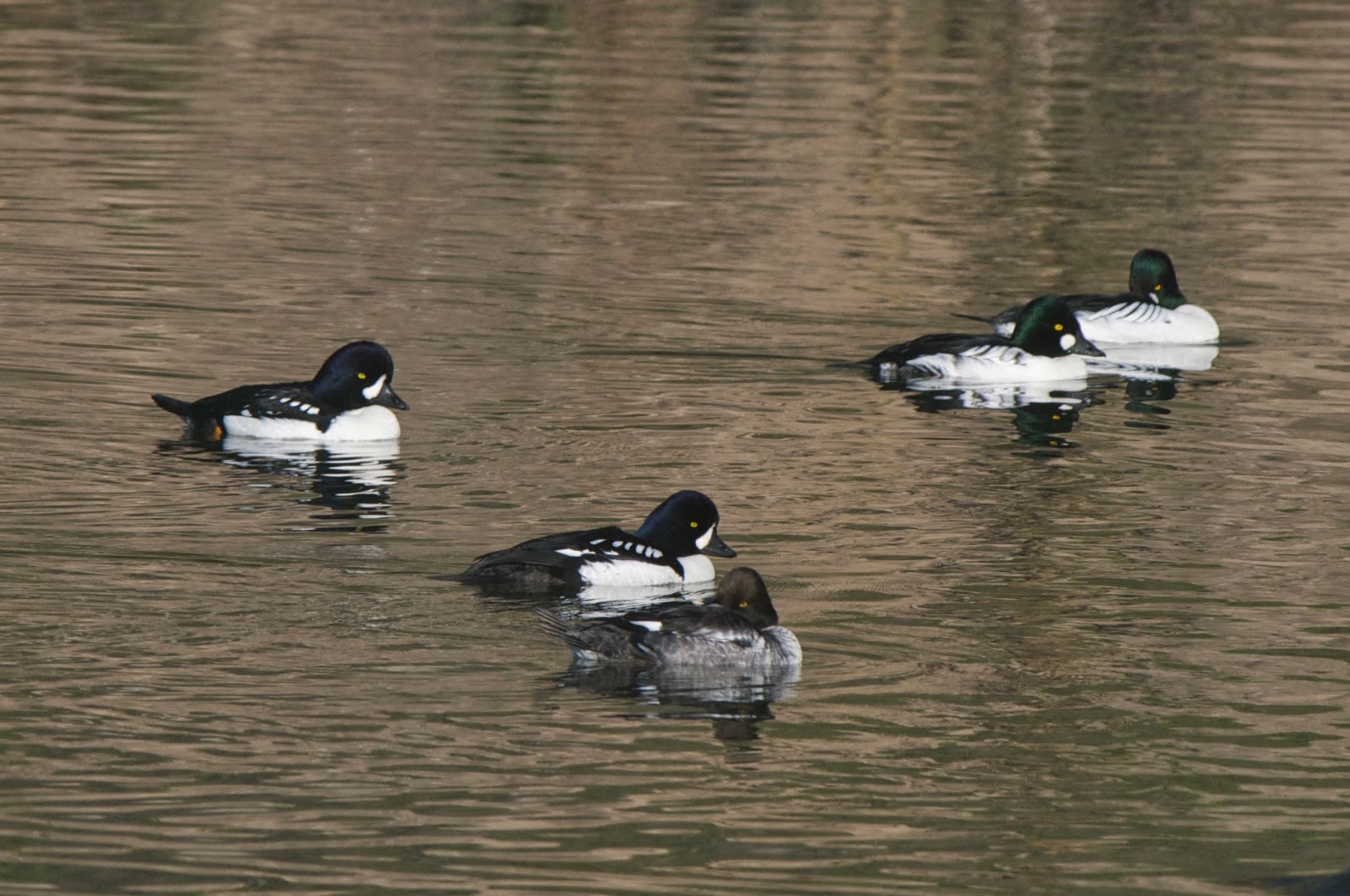 Whew.  In the end, I reached 150 species in the county in the first week of the year.  All of a sudden, it hit me that I'm basically 3/4ths through the species I'll see in Sacramento County this year already!   I looked at my pace in 2014 and it took me 3 weeks to hit 150 so I guess I'm ahead of schedule.

So branching out a bit, we actually took a detour one day and headed up into Gates Canyon in Solano County.  I love this canyon.  We weren't very far in when we noticed BAND-TAILED PIGEONS freaking everywhere: 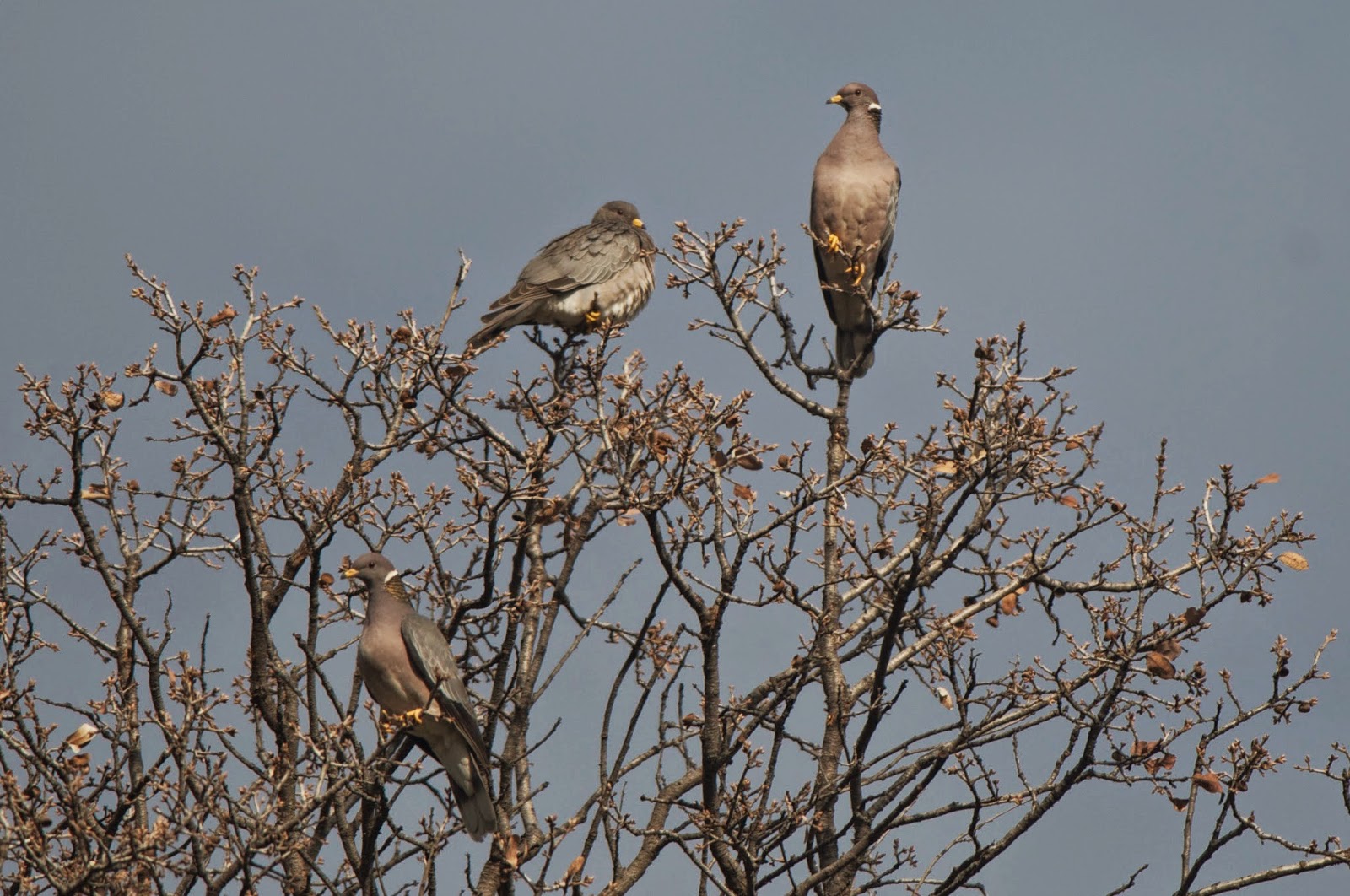 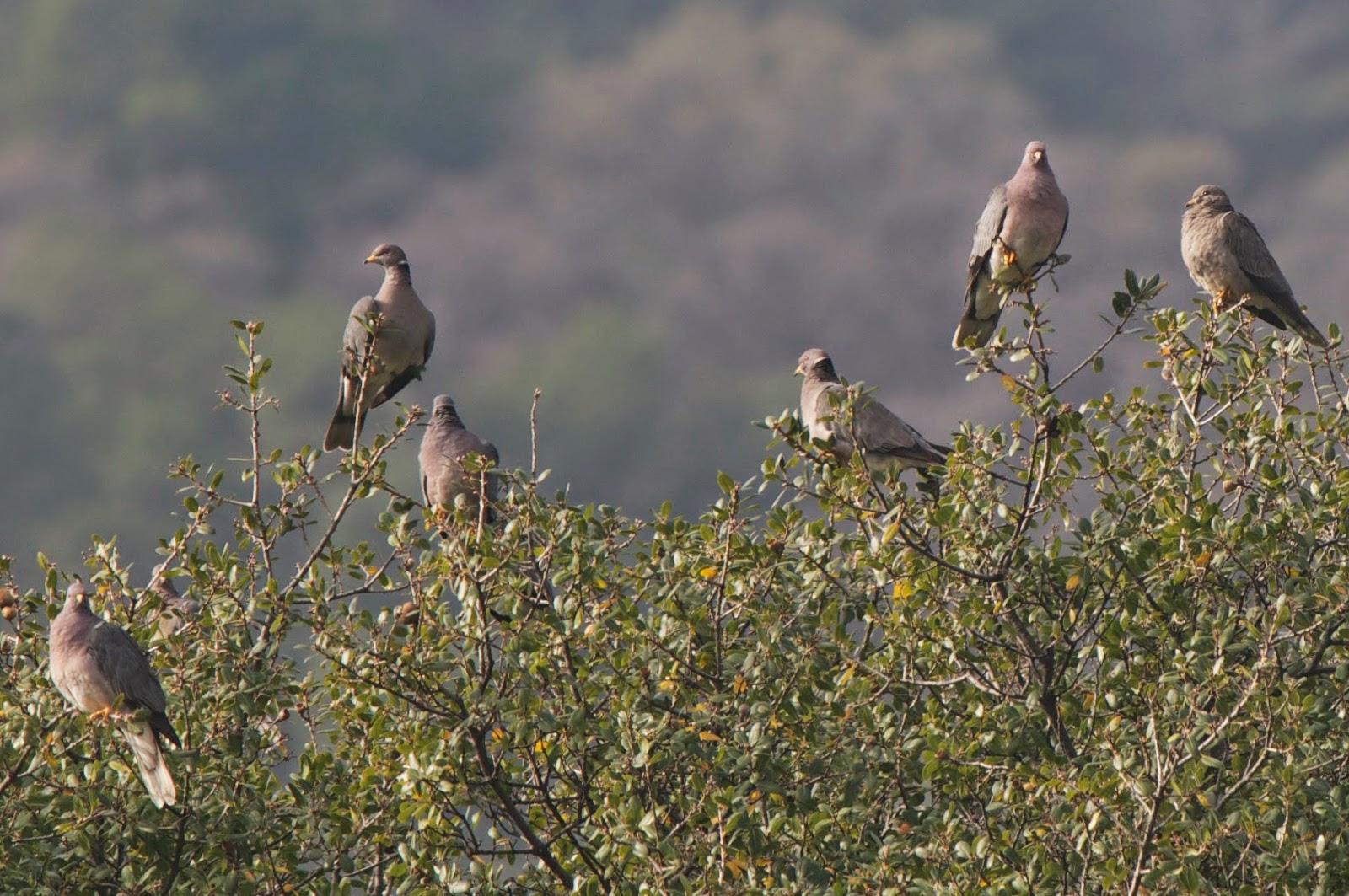 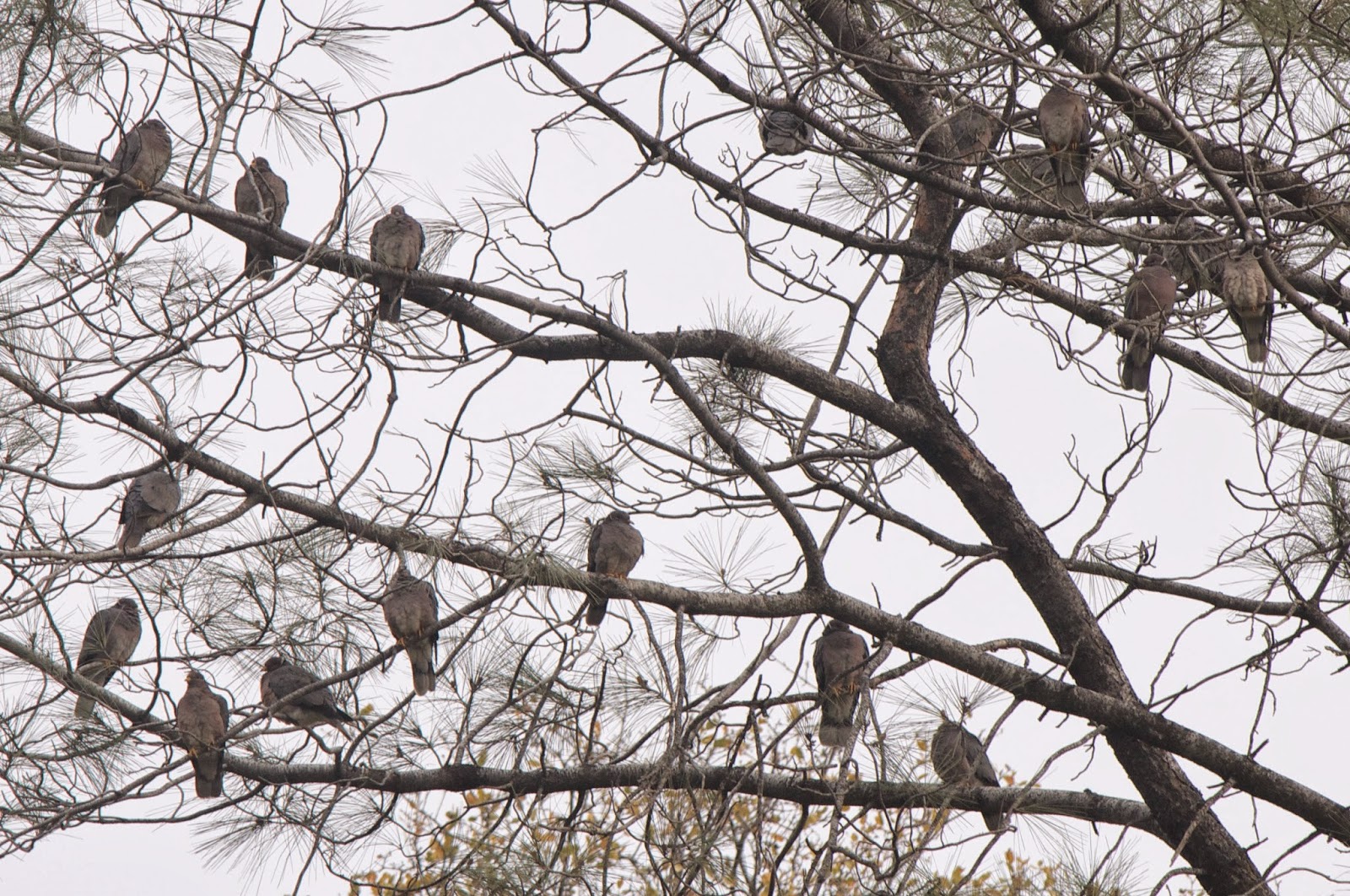 Yeeeeeah, we ended with nearly 300!  Again, this winter has brought BTPIs into lower elevations all over the place (so no, this wasn't all that unexpected).  What WAS unexpected was finding a TOWNSEND'S SOLITAIRE about 3.3 miles in: 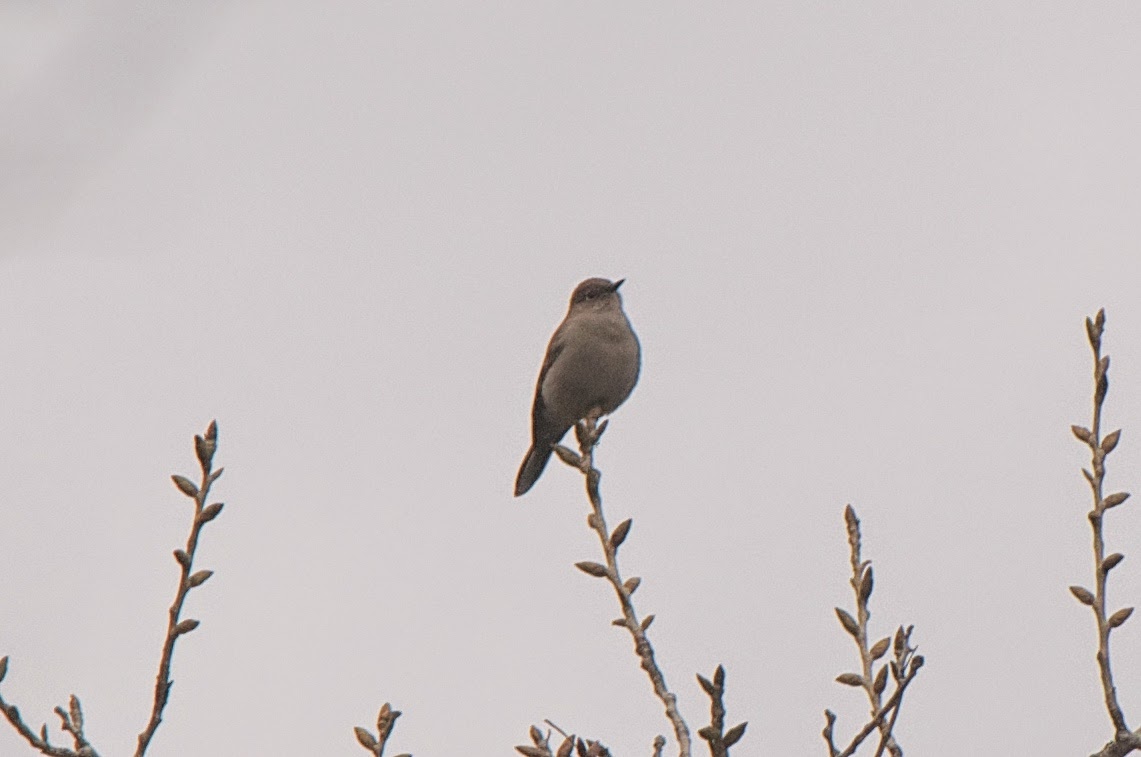 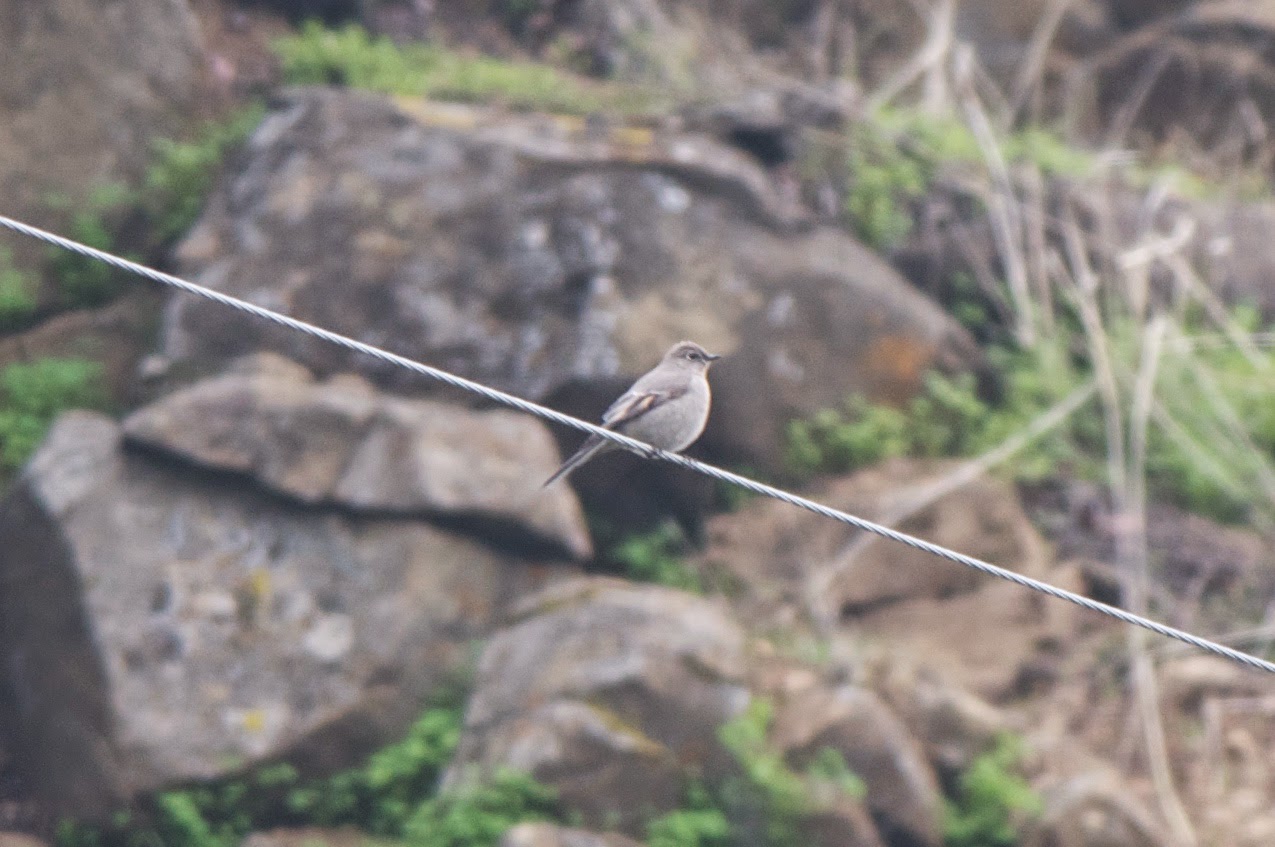 This was a good find for us, there were only 4 other Solano County eBird records of this species.