Some of you might have followed along when I worked at Whitefish Point Bird Observatory last fall.  I blogged every day for that season and although I enjoyed doing it, I won’t be following that trend on St. Paul.  I mean, I could but…

However, the first couple of days on St. Paul were interesting enough (to me, at least) that this post will just cover one day.

I’m not entirely sure where to begin but the alcids seem like a good place to start… this places is LOADED with them.  Not a couple, a couple hundred, or a couple of thousand… but way more.  A big part of that number comes down to one of the smallest alcid species; LEAST AUKLET.   They breed on the rocky cliffs and even moreso in rocky areas with boulders.  There are a few walls and bouldery areas here that spawn these things out by the thousands.  Here’s a quick look at a few I digiscoped with my phone: 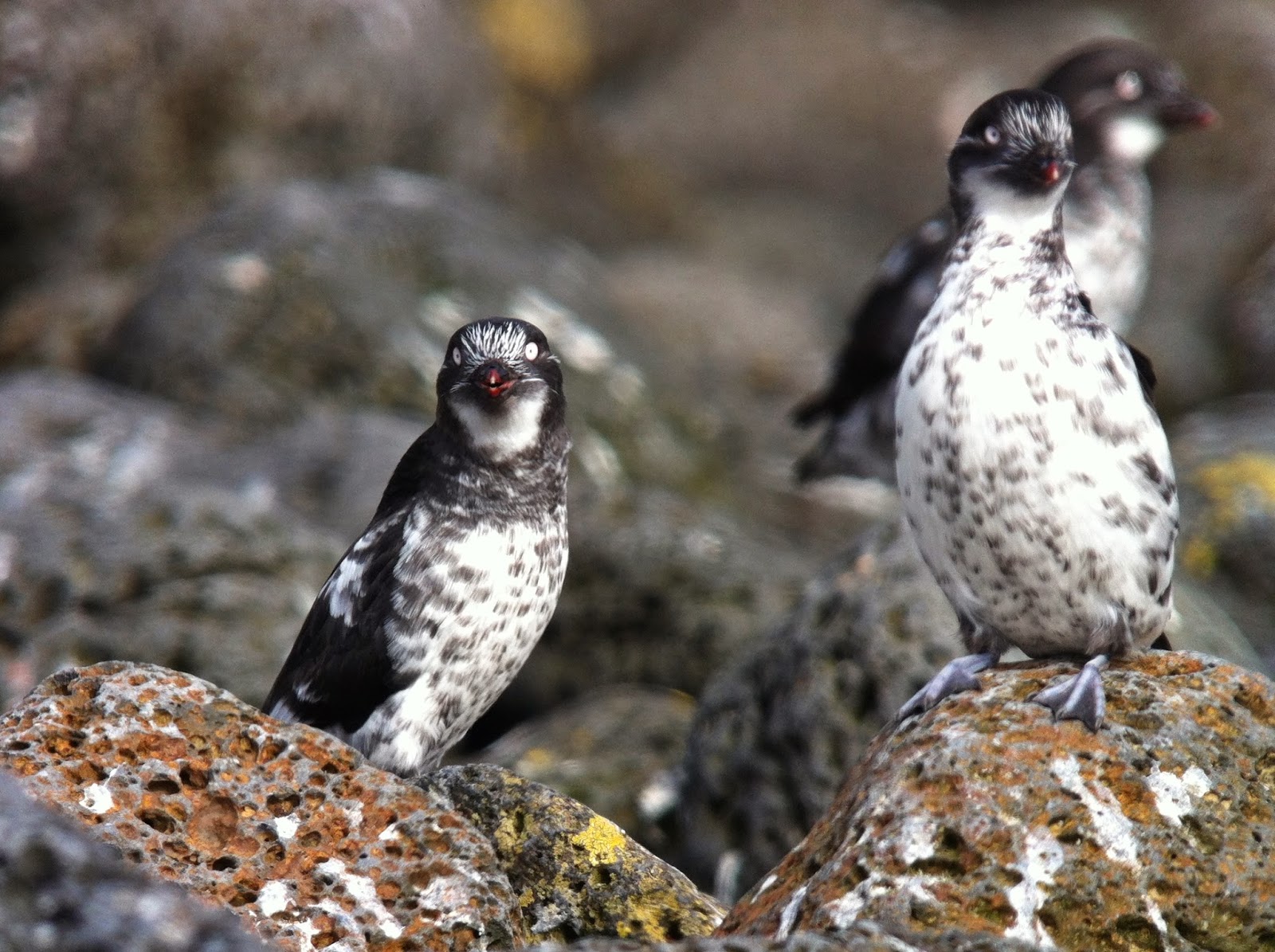 I’m sure we’ll get back to alcids later.  For now, though, we’ll switch to shorebirds.  There is one thing you’ll learn VERY quickly upon arriving to St. Paul and that is the ROCK SANDPIPERS are nothing short of omnipresent.  They’re likely the first bird you’ll hear when you get off the plane and they’ll be hardly out-of-sight for the rest of your stay.  They are EVERYWHERE.  Perched on vehicles in town, sitting in the road, hovering over you wherever you might be, you name it.  In truth, I cannot think of a single square foot of this island where I’d be surprised to see one.  With that said, they’re freaking cool birds.  The subspecies here is endemic to the Pribs and oh, they’re absolutely enormous too: 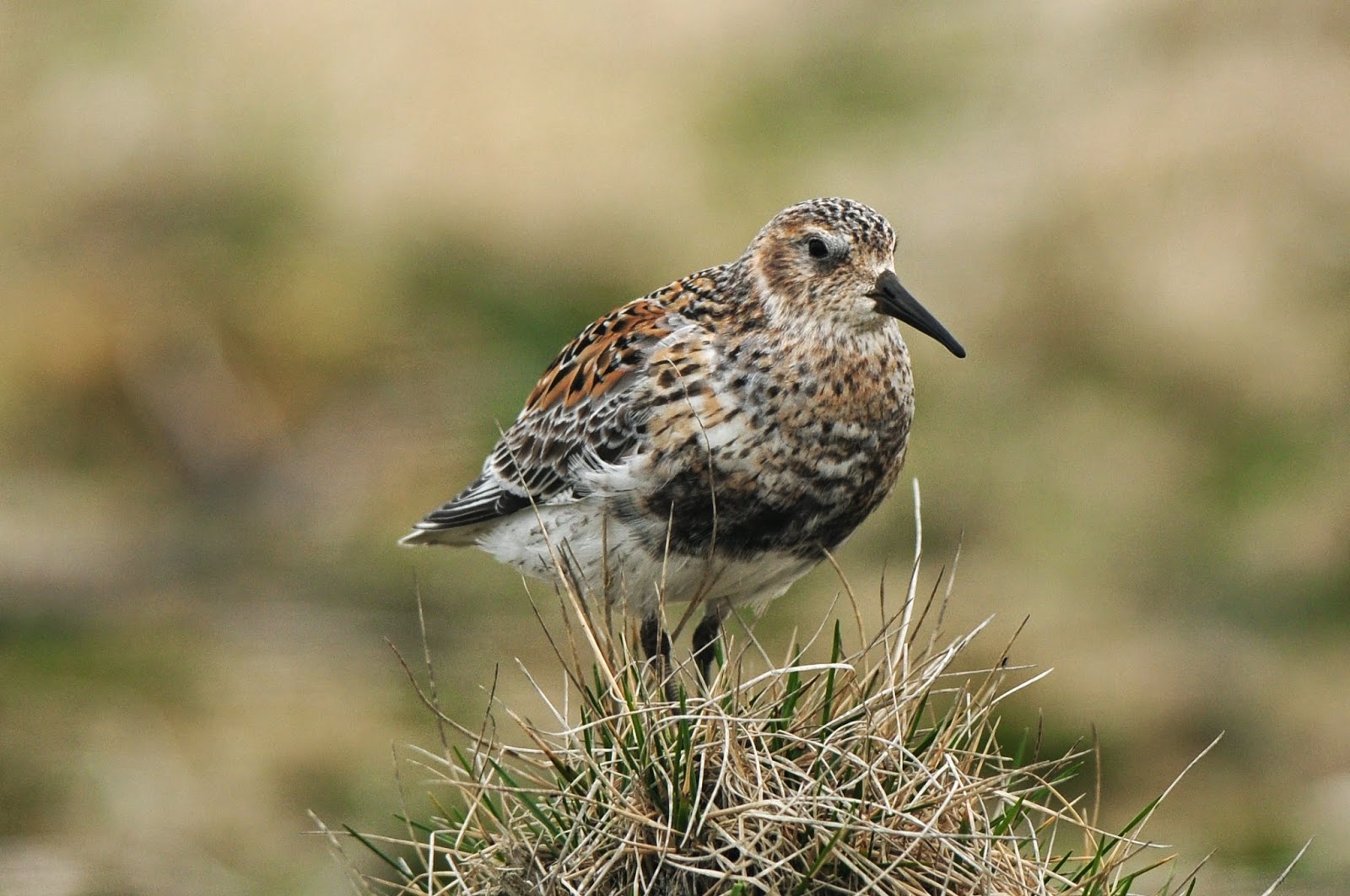 We did see one ROCK SANDPIPER that stood out as being smaller and darker.  Without having looked into this topic any, it seems possible that this is of a different subspecies (which does happen here from time to time).  Here’s a picture of it (lower right): 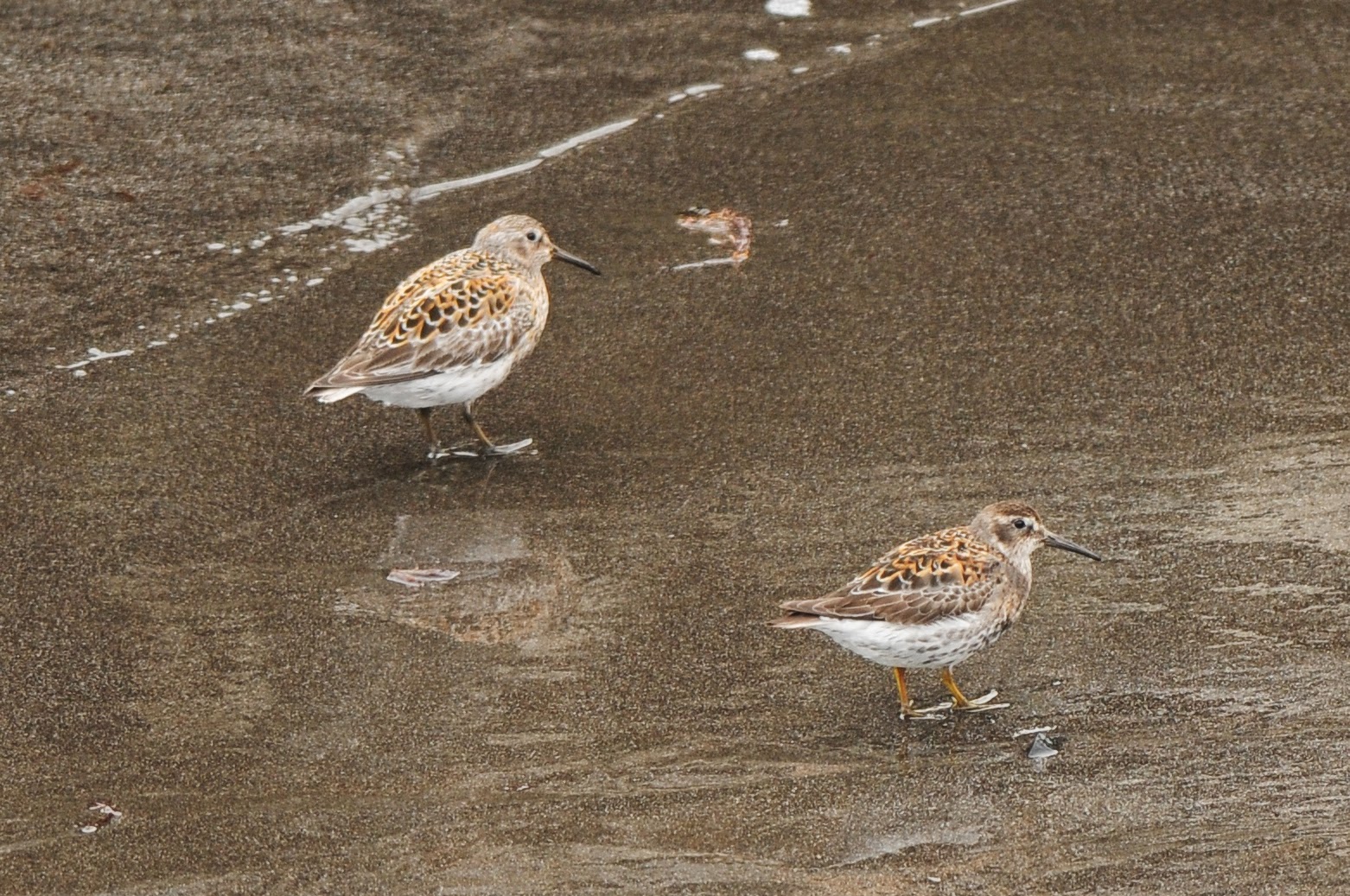 Being fairly early in the year yet, it’s no surprise that waterfowl were here waiting for us.  The most abundant diving duck that breeds on the island is the LONG-TAILED DUCK which you can see on a number of inland lakes here.  Here’s a male: 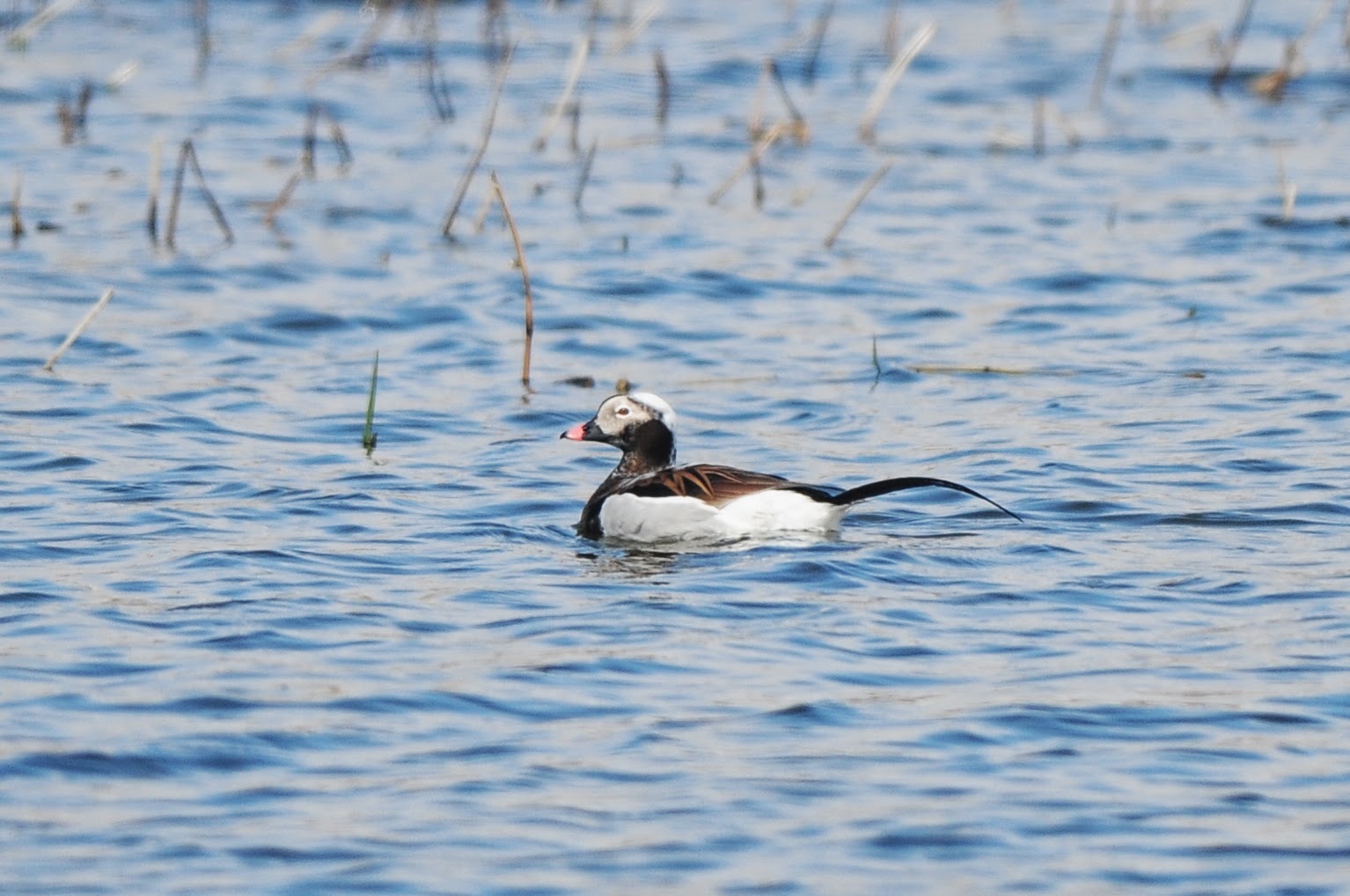 We also have had “ALEUTIAN” CACKLING GEESE around too which is ironic considering I spend my winters with these very birds.  I haven’t seen a collared one but that’d be pretty ridiculous if I managed that.  One species of goose I was very keen to see was my long-awaited lifer EMPEROR GOOSE.  We managed a few at Polovina Point which was a relief; those might be the last I see until fall.  Here's a digiscoped picture I took with my phone: 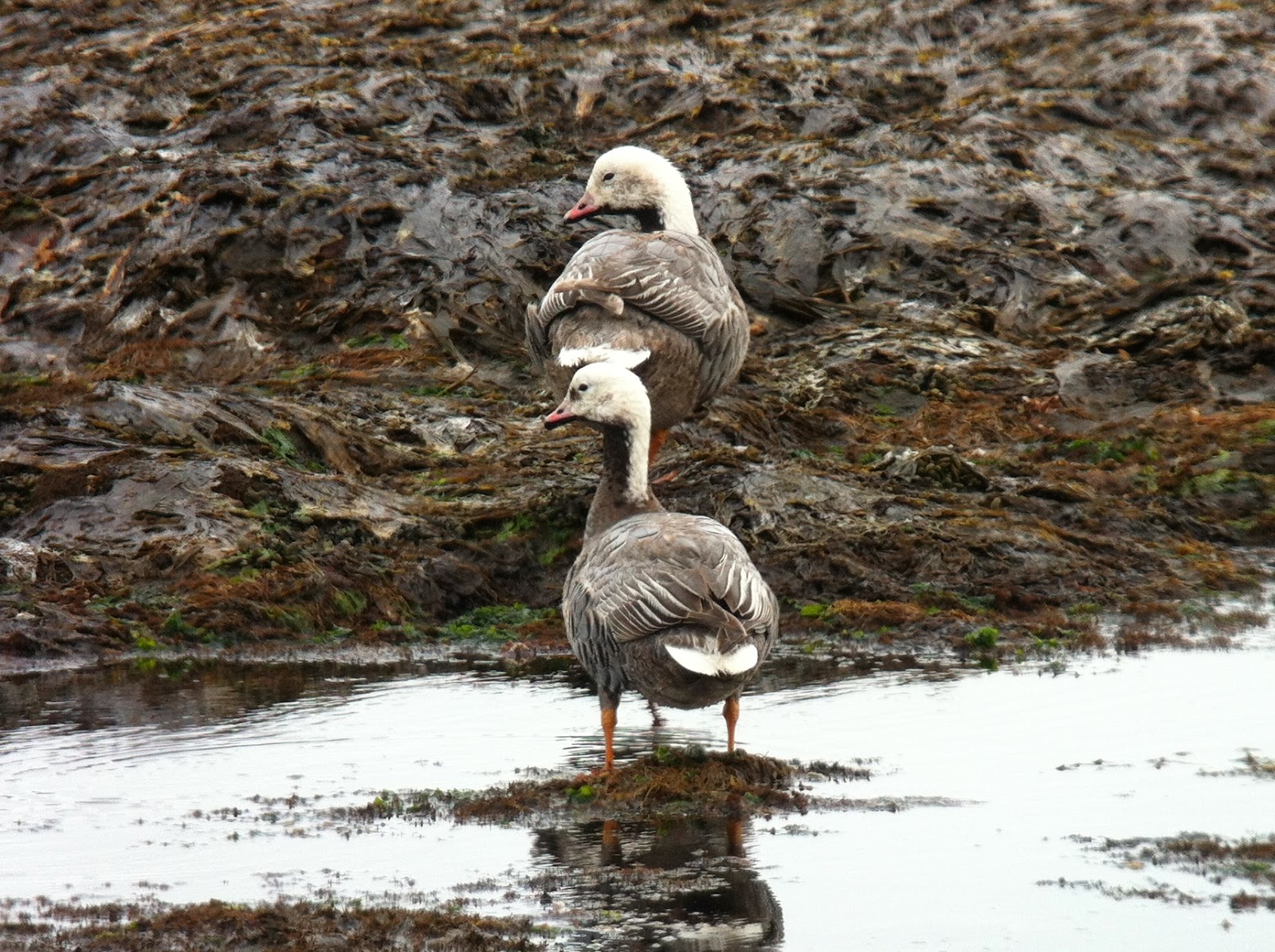 Last but not least, it was fun to find a SHORT-EARED OWL up by Webster Lake late that day.  Listed as uncommon in the spring, we all hope it departed right away (there are no mice or voles on this island to feed owls).   Regardless, here the owl is diving for something (it didn’t catch anything and honestly, we have no idea what it could have seen): 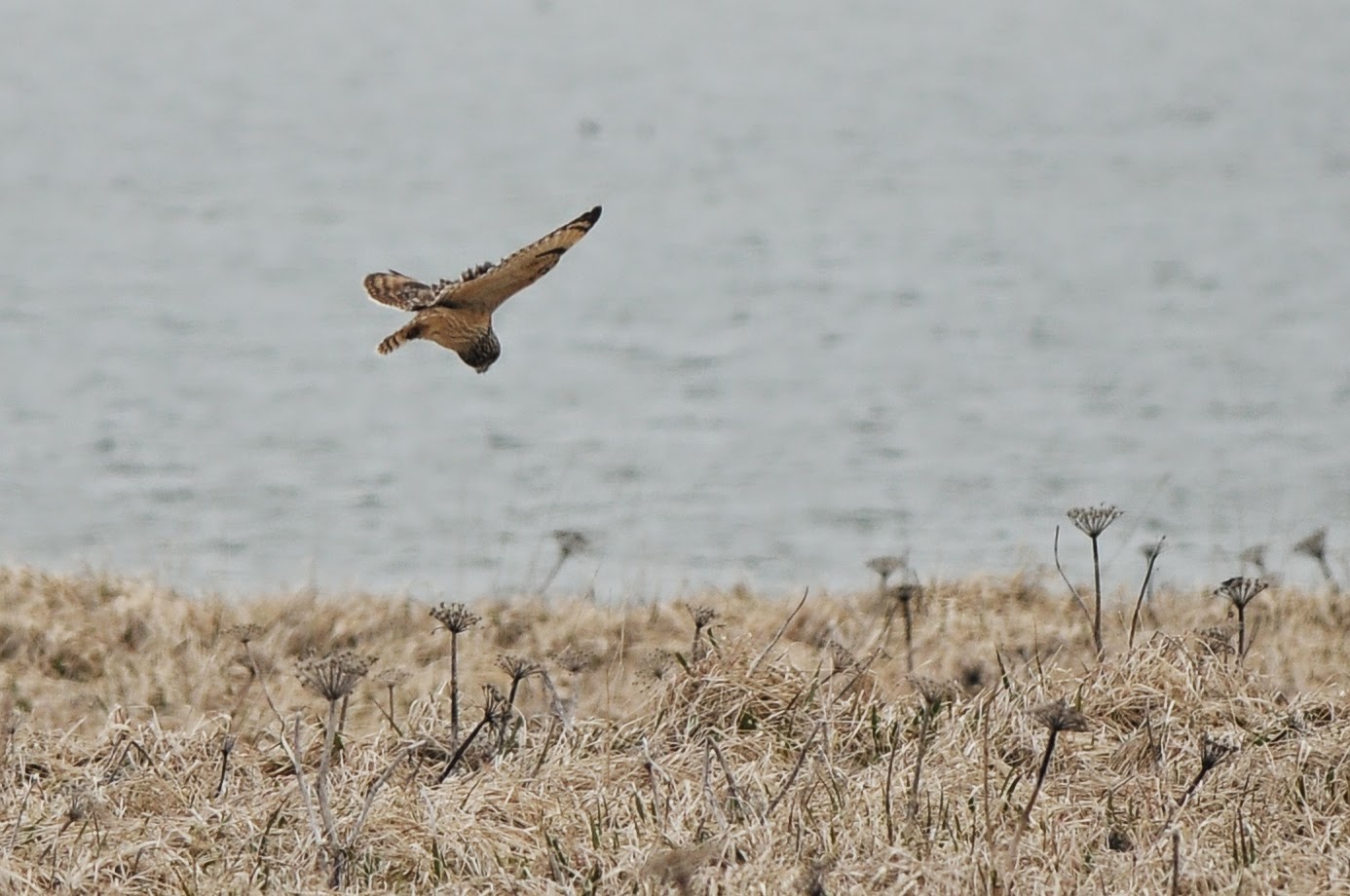